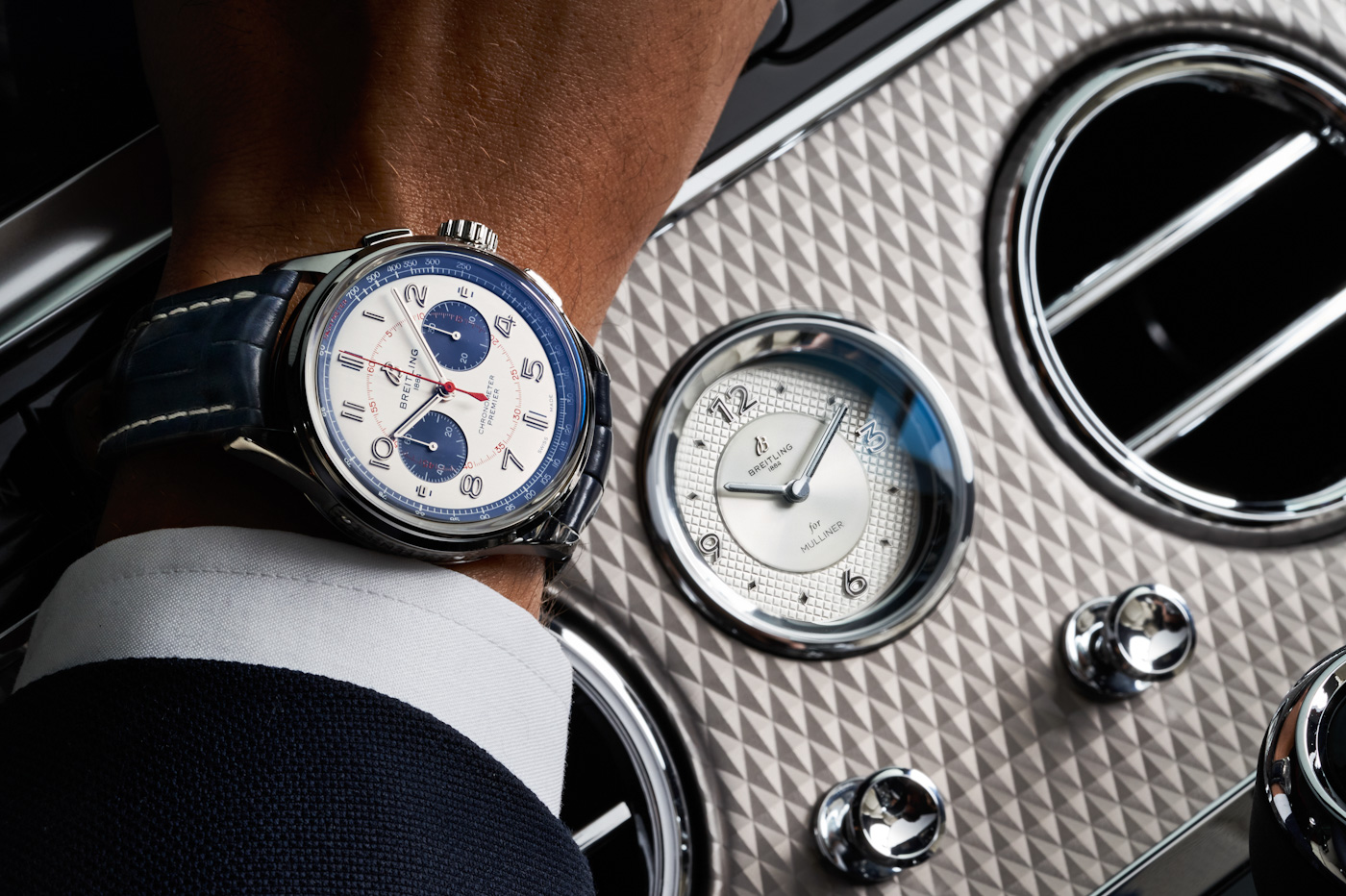 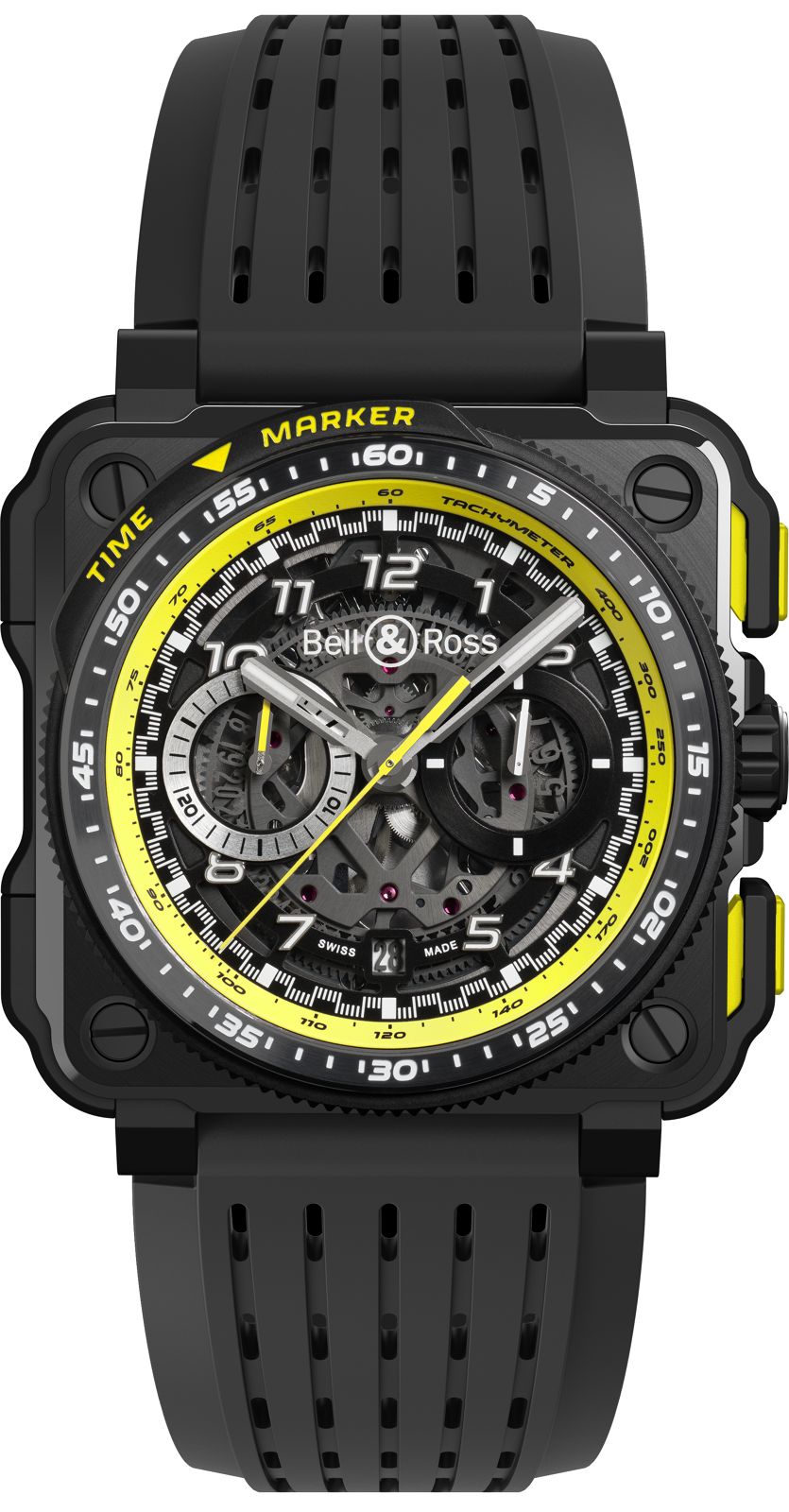 Breitling wasn’t the only brand with automotive-themed watch releases this week, as Bell & Ross has unveiled its fifth limited edition collection in partnership with the Renault Sport Formula 1 team. The collection of four new pieces includes special dial treatments for both the round BR V3-94 sports chronograph (limited to 999 pieces, starting at $4,400) and BR 03-94 square case chronograph (also limited to 999 pieces, MSRP of $6,500), but the star of the collection is undoubtedly the BR-X1 R.S.20, a skeletonized version of the classic BR 03-94 square chronograph with some serious material and design advancements. The 45 mm case expands on the traditional square Bell & Ross shape with a more futuristic tiered design with elements made from PVD black titanium, ceramic, and bright Renault yellow rubber inserts on the paddle shifter-esque chronograph pushers. The bidirectional bezel also includes a bright yellow “Time Marker” emblem, effectively extending the range of the chronograph from 30 minutes to 12 hours through use of the bezel. Of course, the skeleton dial is the real focal point, with an intricate, ultramodern design that incorporates floating subdial rings at 3 and 9 o’clock along with more sporty yellow accents. The BR-CAL.313 in house automatic chronograph movement on display is an impressive piece of engineering as well, with a unique X-shaped bridge and 28,800 bph sweep. The BR-X1 R.S.20 is mounted on a vented rubber strap for maximum comfort and wearability. The BR-X1 R.S.20 is limited to just 250 pieces, at a price of $21,500. 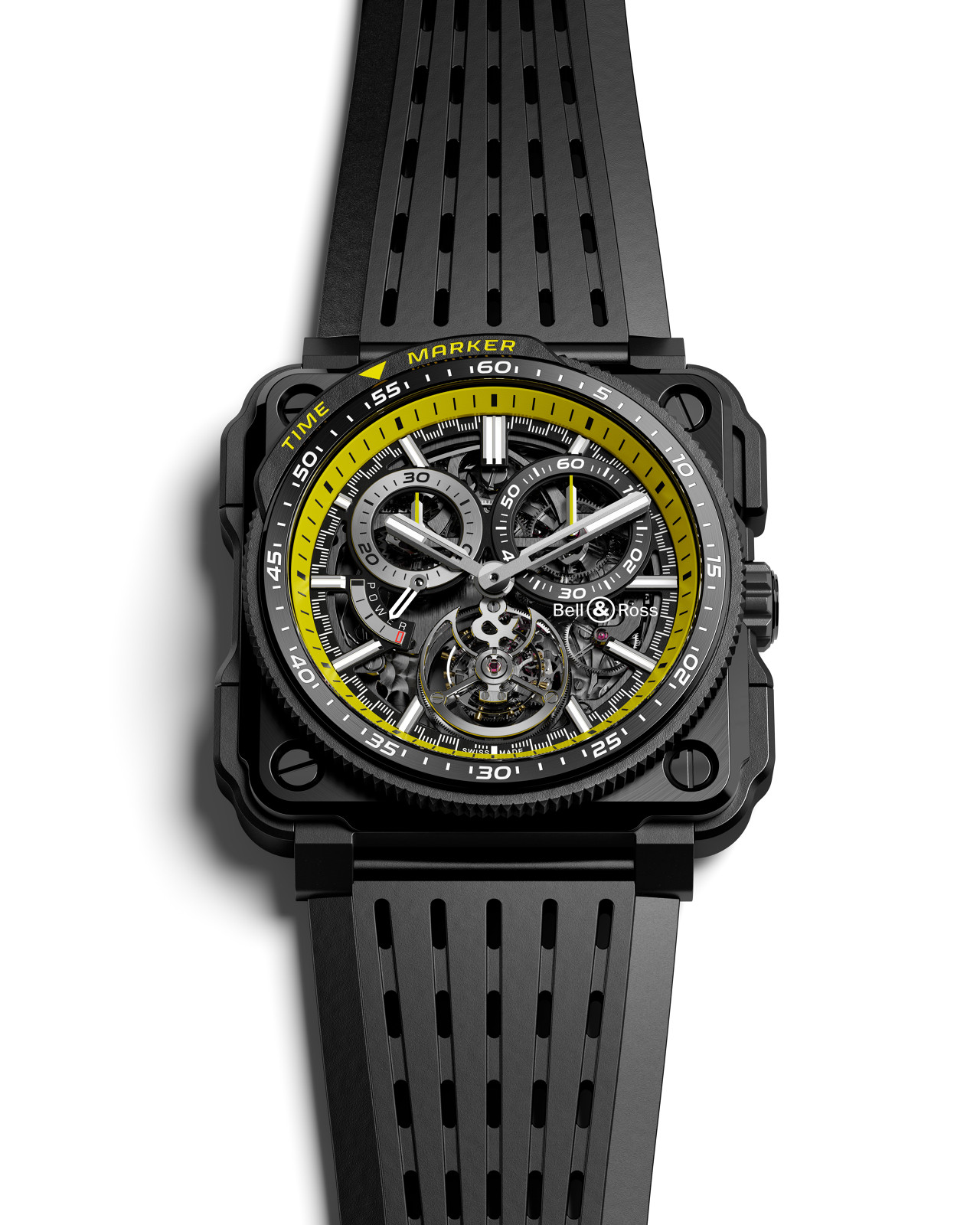 Even more extreme than the standard BR-X1 R.S.20 is the BR-X1 Tourbillon R.S.20, which as the name suggests, adds that most difficult of mechanical complications to the already highly complex skeleton automatic chronograph formula. The overall visual treatment is similar, with a nearly identical case modified for the monopusher movement, while the dial receives a totally new layout moving the chronograph subdials to 11 and 1 o’clock to make way for the oversized flying tourbillon in its signed cage at 6 o’clock. Beyond the flying tourbillon, the skeletonized BR-CAL.283 movement offers a 30-minute chronograph along with a four day power reserve indicator at 9 o’clock. Only 20 of these will be made, and while Bell & Ross hasn’t yet listed an official price previous models in the series suggest a probable MSRP of roughly $200,000. For more information, please visit the brand’s website.

Ball has always danced to the beat of its own horological drum, and its latest release is one of the best and most interesting examples of this in recent years. The limited edition Engineer Master II Diver Worldtime is an unorthodox blend of styles, offering both 300 meters of water resistance and world timing functionality in a package that combines stylistic elements of both with a signature Ball flair. At first glance the 42 mm stainless steel case appears to be pretty standard diver fare with broad lugs and prominent crown guards, but on closer inspection the bold markers and numerals of the diving scale are actually underneath the crystal. The diving scale and world time ring are both controlled via the narrow coin edge external bezel, while remaining safe from damage underneath the crystal. It’s a setup that takes some adjusting to visually. The dial of the Engineer Master II Diver Worldtime is classic Ball inboard of the complex rotating outer rings. Ball’s signature tritium tube illumination system is plentiful here, with tall green tubes for the indices and blocky Arabic numerals while the sword hands receive contrasting orange for instant legibility. Ball offers two color schemes, one in black with a black and orange 24 hour ring and an additional blue dial variant with a white and green ring. The day/date complication is suitably unorthodox as well, with the date at the usual 3 o’clock position but the day window all the way down at 6 o’clock. The RR1501-C automatic movement inside the Engineer Master II Diver Worldtime is an impressive piece in its own right, with COSC chronometer accuracy and handsomely applied Geneva stripes on the custom rotor. Ball offers the Engineer Master II Diver Worldtime on either an oyster style bracelet with dive exension or a rubber strap. Only 1000 of each dial variant will be made, and the watches are available now through authorized dealers at a starting MSRP of $3,199. Visit Ball’s website for more details. 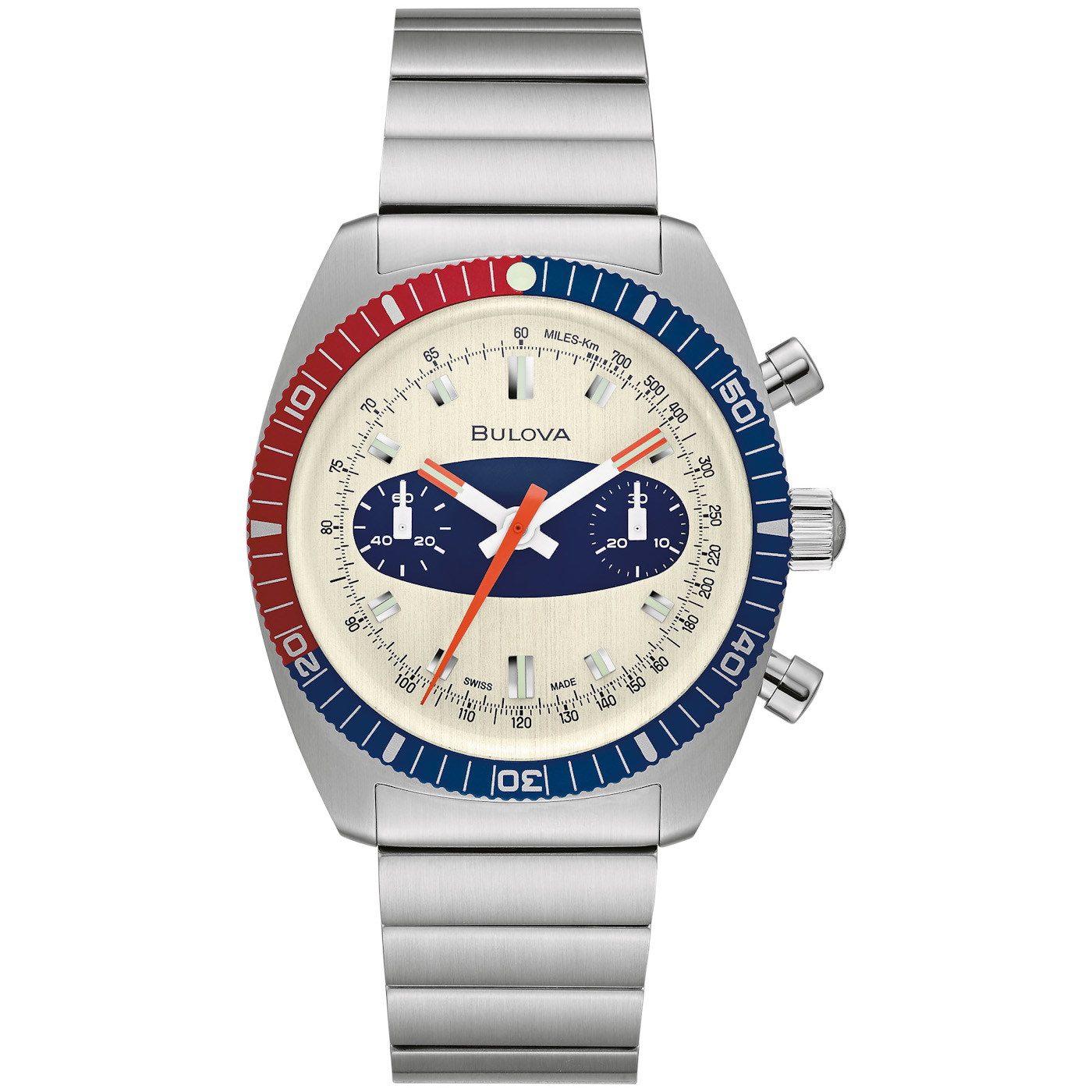 2020 has already become a year of historic reissues for Bulova, and the brand has kicked off March with one of its boldest releases so far this year. The Bulova Chronograph A, nicknamed the “Surfboard” for its distinctive surfboard shaped blue patch on the dial, has long been a favorite among brand collectors for its eclectic ’70s style, and the brand has remained remarkably faithful to the original for three new regular production models and a special limited edition. All four share the same 40 mm stainless steel tonneau case with a colorful throwback anodized bezel and 200 meters of water resistance. The limited edition model is nearly identical to the 1970 original, with a blue and red bezel, orange accents on the hands, and a textured cream dial cut through by the signature blue “surfboard”. The three regular production units follow the same form, but have a little fun with color. One swaps the blue of the bezel and the “surfboard” for a more serious black, one replaces the red section of the bezel with orange, and the most dramatic goes the reverse panda route, rendering the main dial in blue with a white “surfboard” while the orange elements are replaced with a deeper red. Where the limited edition really sets itself apart, however, is on the inside. The limited edition variant is powered by a Sellita Caliber SW-510 BH b automatic chronograph movement, offering a 48 hour power reserve. Meanwhile, the regular production models receive a Miyota Caliber 6S21-00A quartz powerplant. Likewise, the limited edition receives special treatment when it comes to straps, with a stainless steel bracelet, while the production versions are paired with color coordinated tropic straps. Only 350 examples of the limited edition model will be produced, at a hefty MSRP of $2,950 , while production models are available now at an MSRP of $695. Check Bulova’s site for more details.