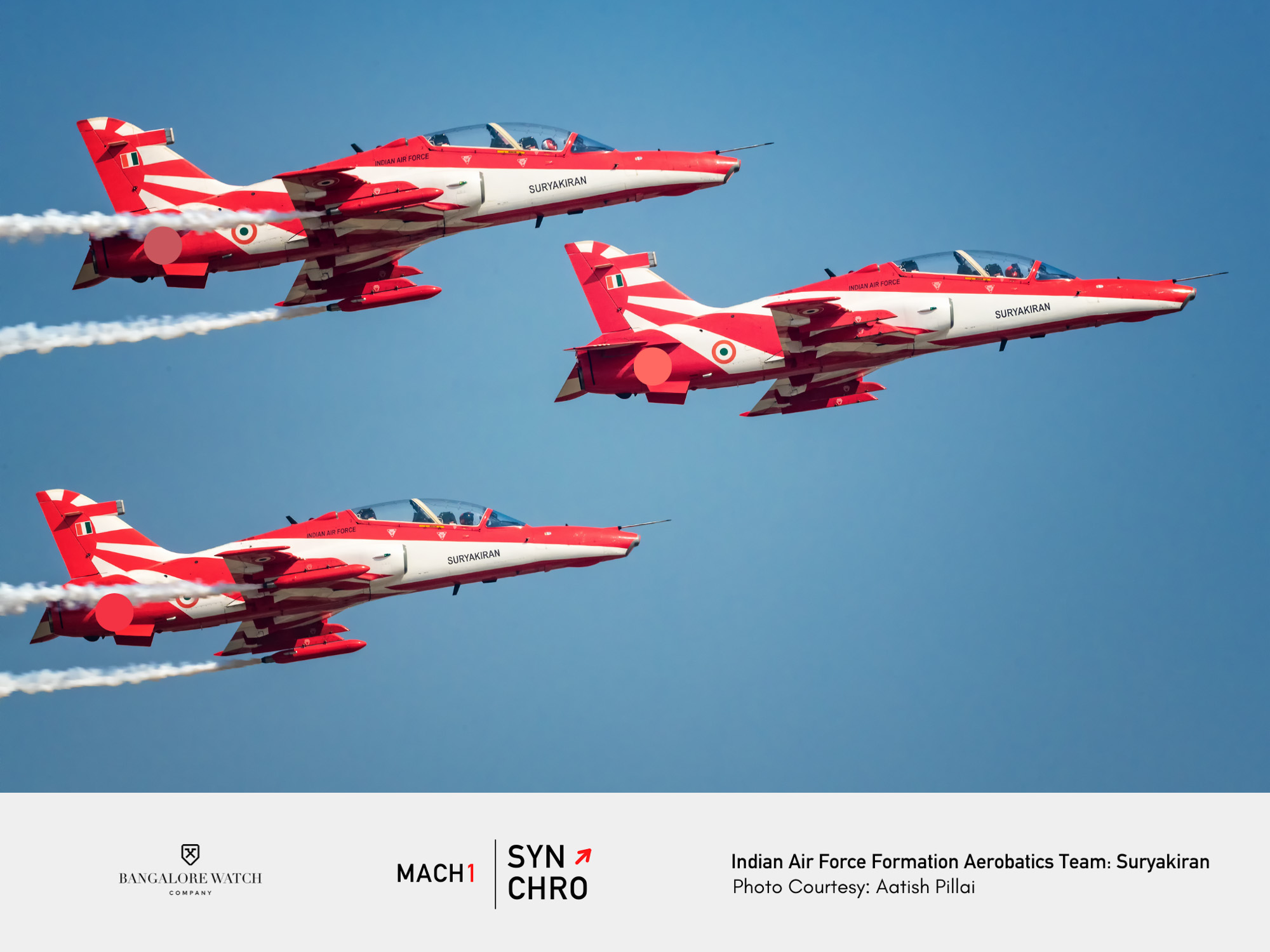 Bangalore Watch Company™ was founded in 2018 by Nirupesh Joshi and Mercy Amalraj, they proudly produce high-quality watches in limited numbers that tell stories inspired by India. In 2019, the brand launched MACH 1, a collection inspired by the Indian Air Force. Within a few short years, the MACH 1 has become the quintessential Indian pilot’s watch. Expanding upon the successful MACH 1 series, the new limited-edition watch – MACH 1 Synchro – celebrates the 25th Anniversary of the Indian Air Force Formation Aerobatics team – Suryakiran (a.k.a SKAT). SKAT holds the distinction of being the only 9-aircraft display team in all of Asia. 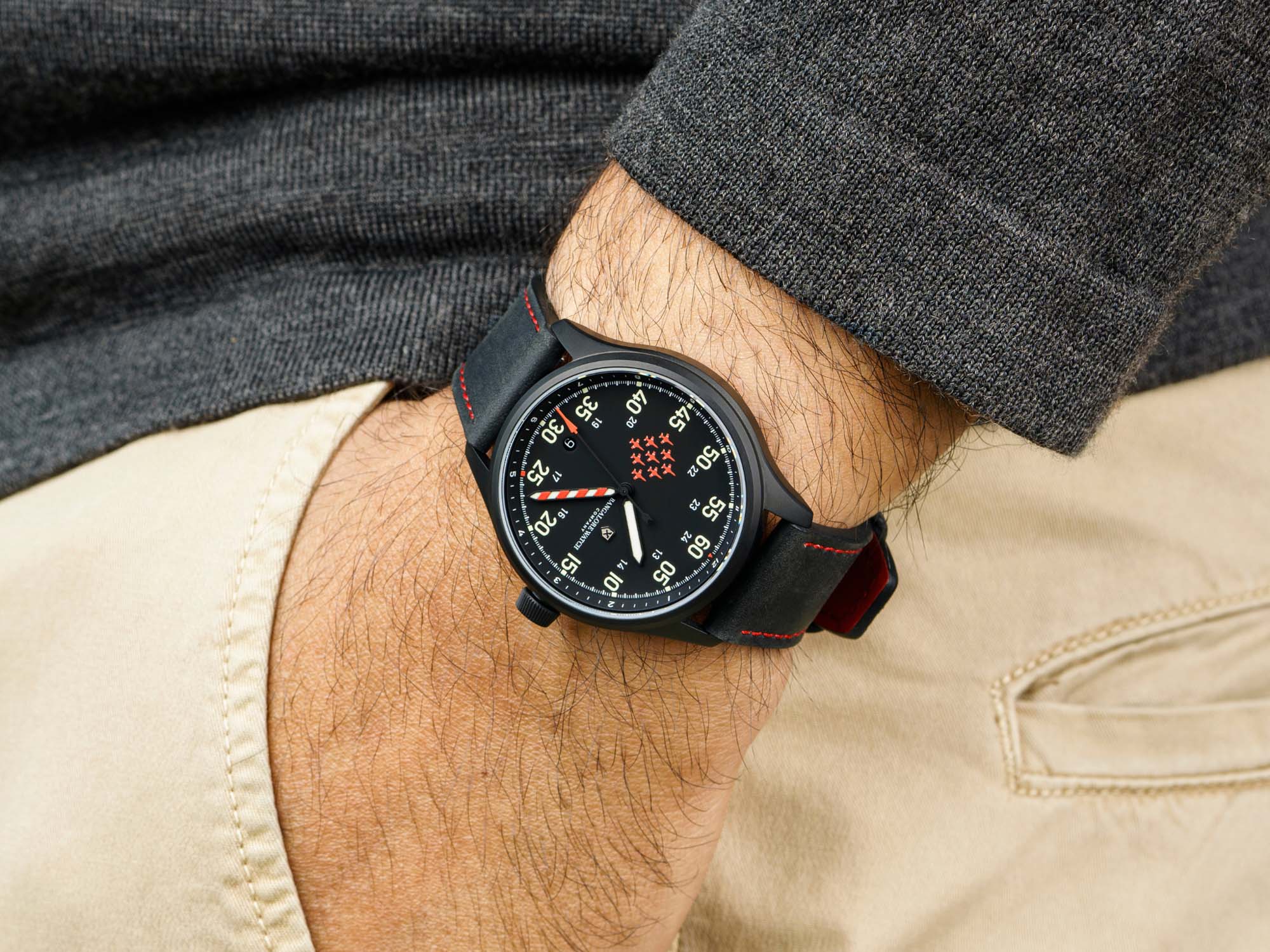 The name “Suryakiran” translates to “rays of the sun,” and the prestigious aerobatics team consists of the very best pilots from across fighter streams of the Indian Air Force. Only the most skilled pilots are eligible for selection, and they are hand-picked for a three-year assignment with SKAT. The Suryakiran squadron’s red and white colors are emblematic of India’s Air Force elite. In 2021, the Suryakiran Aerobatics Team celebrated its 25th anniversary, and to commemorate this special occasion, Bangalore Watch Company has created the MACH 1 Synchro as a limited edition collection of 125 pieces that pays tribute to India’s modern aviation heritage and the incredible skill of the Suryakiran team. The red and white livery of the SKAT planes is an unmissable sight at every demonstration, in India and around the world. 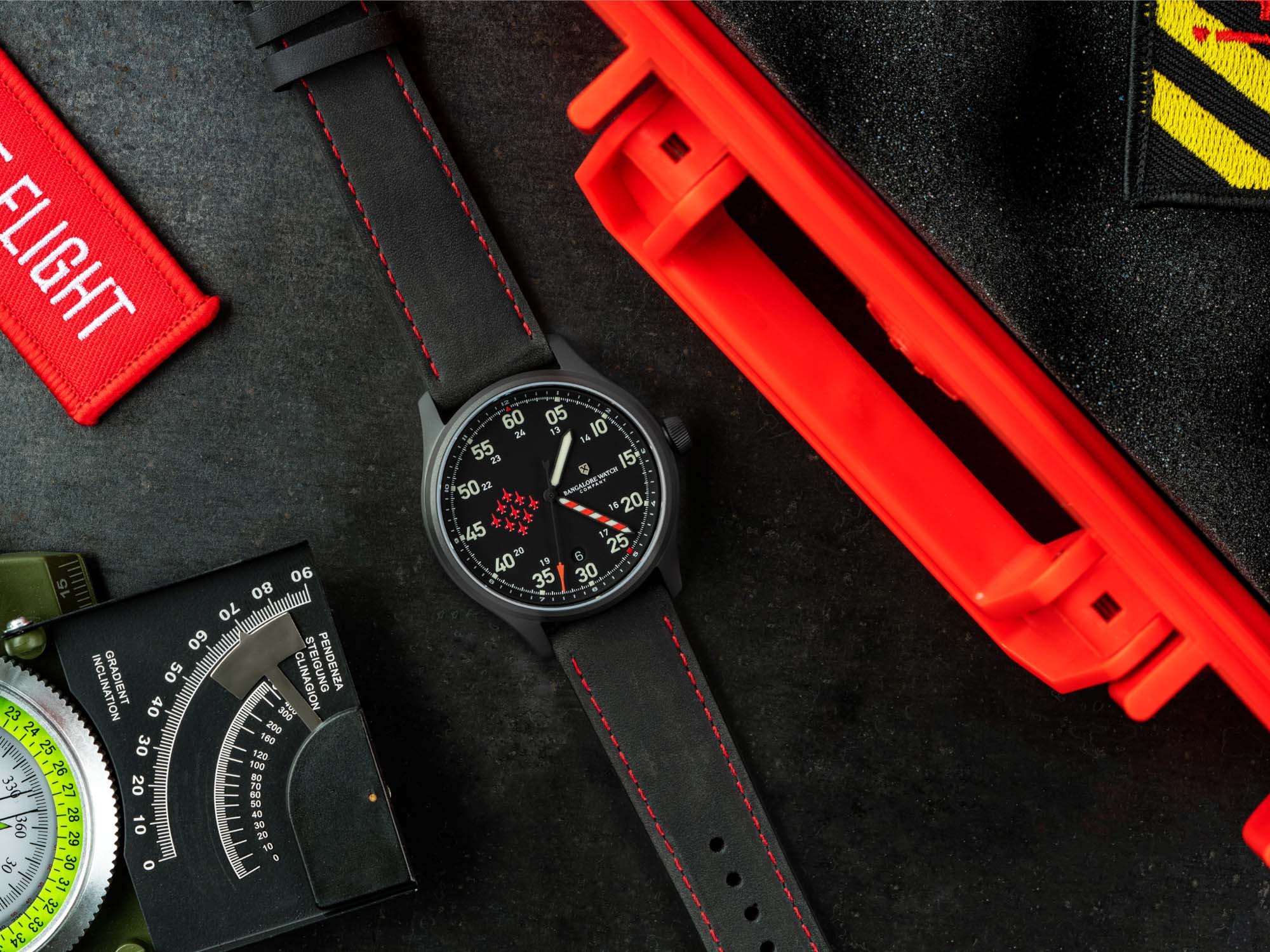 The case of the Bangalore Watch Company MACH 1 Synchro is crafted from solid 316L stainless steel and finished with a matte-black PVD coating. The case itself measures 40mm in diameter by 46.5mm lug-to-lug, with an overall thickness of 11mm and a standard lug width of 20mm. Fitted to the top of the watch is a simple fixed smooth bezel, which surrounds a flat scratch-resistant sapphire crystal with an anti-reflective coating. A grooved oversized winding crown located on the side of the case at 3 o’clock offers easy access to the movement, while 100 meters of water resistance is supplied by a solid stainless steel screw-down caseback that is decorated with an engraving that depicts the signature nine-aircraft diamond formation of the Suryakiran team, along with celebratory text denoting the 25th anniversary of India’s most prestigious aerobatics squadron. 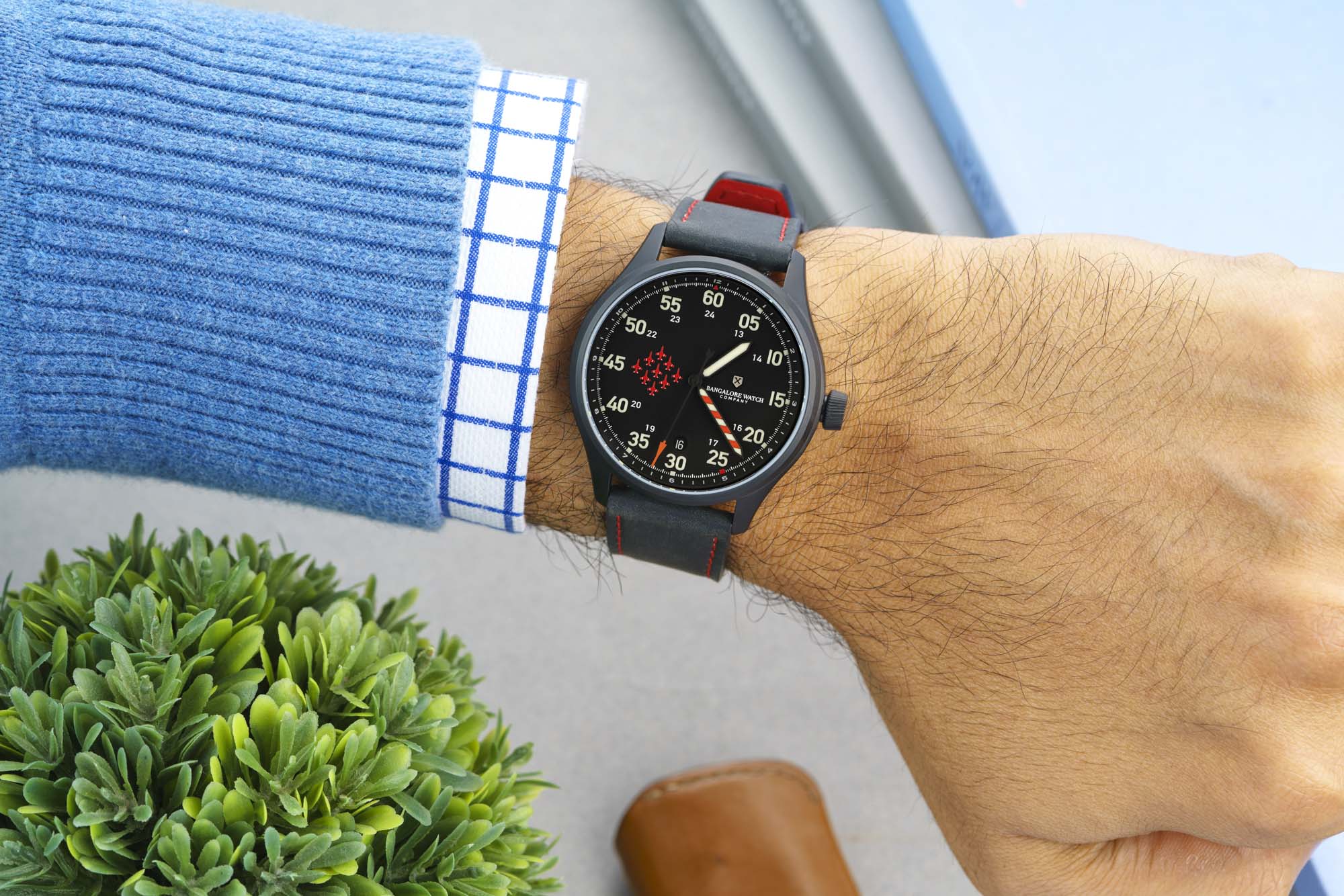 The matte-black dial of the MACH 1 Synchro also features this same 9-aircraft diamond formation in bright red at the 9 o’clock location, and each one of the red planes includes the signature white stripes of the Suryakiran team aircraft running along its wings. The minute marker at the 25 position on the dial appears in the same bright red color as the nine-aircraft formation and serves as a subtle reference to the 25th anniversary of the Suryakiran Aerobatic Team. Additionally, matching the red and white accents on the dial of the MACH 1 Synchro is a diagonal striped pattern on the minute hand, which mimics the livery of the SKAT planes and resembles the airspeed indicators from the cockpits of their aircrafts. Just as you would expect to find on a proper pilot’s watch, the hands and hour markers receive a healthy application of Swiss Super-LumiNova to supply them a bright and long-lasting glow for easy reference of the time in dark environments. 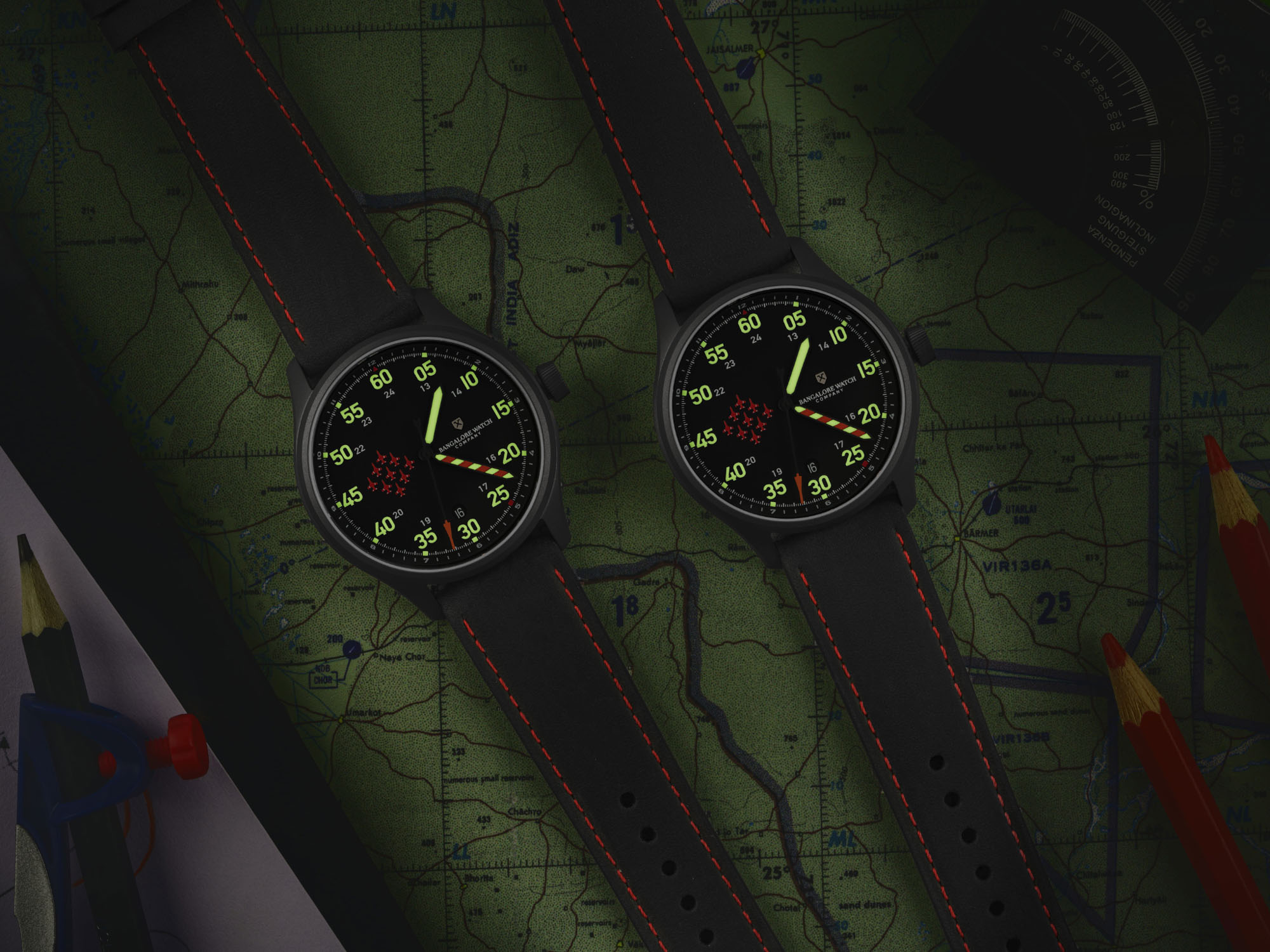 As a brand that places an emphasis on value and the long-term ownership experience of a timepiece, Bangalore Watch Company chooses to power the MACH 1 Synchro with the Swiss-Made Sellita SW200-1 automatic movement. A proven design known for its reliability and ease of service, the Sellita SW200-1 runs at a frequency of 28,800vph and offers the convenience of hacking, hand-winding, and a quickset date that is displayed by a discrete circular window at the 6 o’clock location, along with a power reserve of approximately 38 hours. 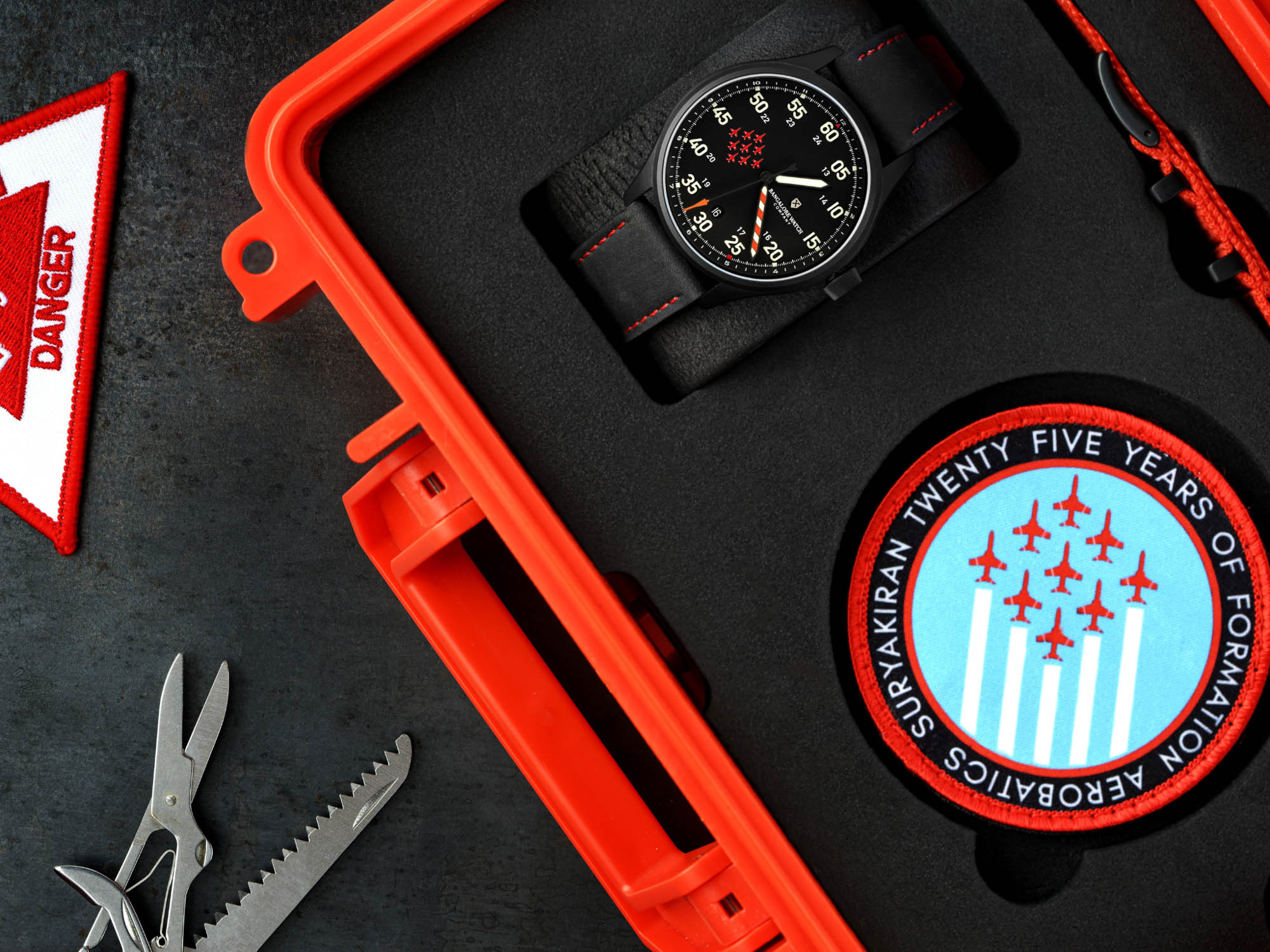 Completing the Bangalore Watch Company MACH 1 Synchro is a black hydro-pulled genuine leather strap that features a red lining and matching red contrasting stitching. The strap itself includes quick-release connections at the lugs and is fitted with a 316L stainless steel pin buckle with a matte black PVD finish. The collector’s edition box set for the MACH 1 Synchro features a matching bright red polymer flight case, and it includes a 25-year celebratory mission patch from the Suryakiran Aerobatic Team, along with an additional two-piece strap made from red waterproof nylon that compliments the bright red accents on the dial of the watch and leans into the flight squadron’s team colors. 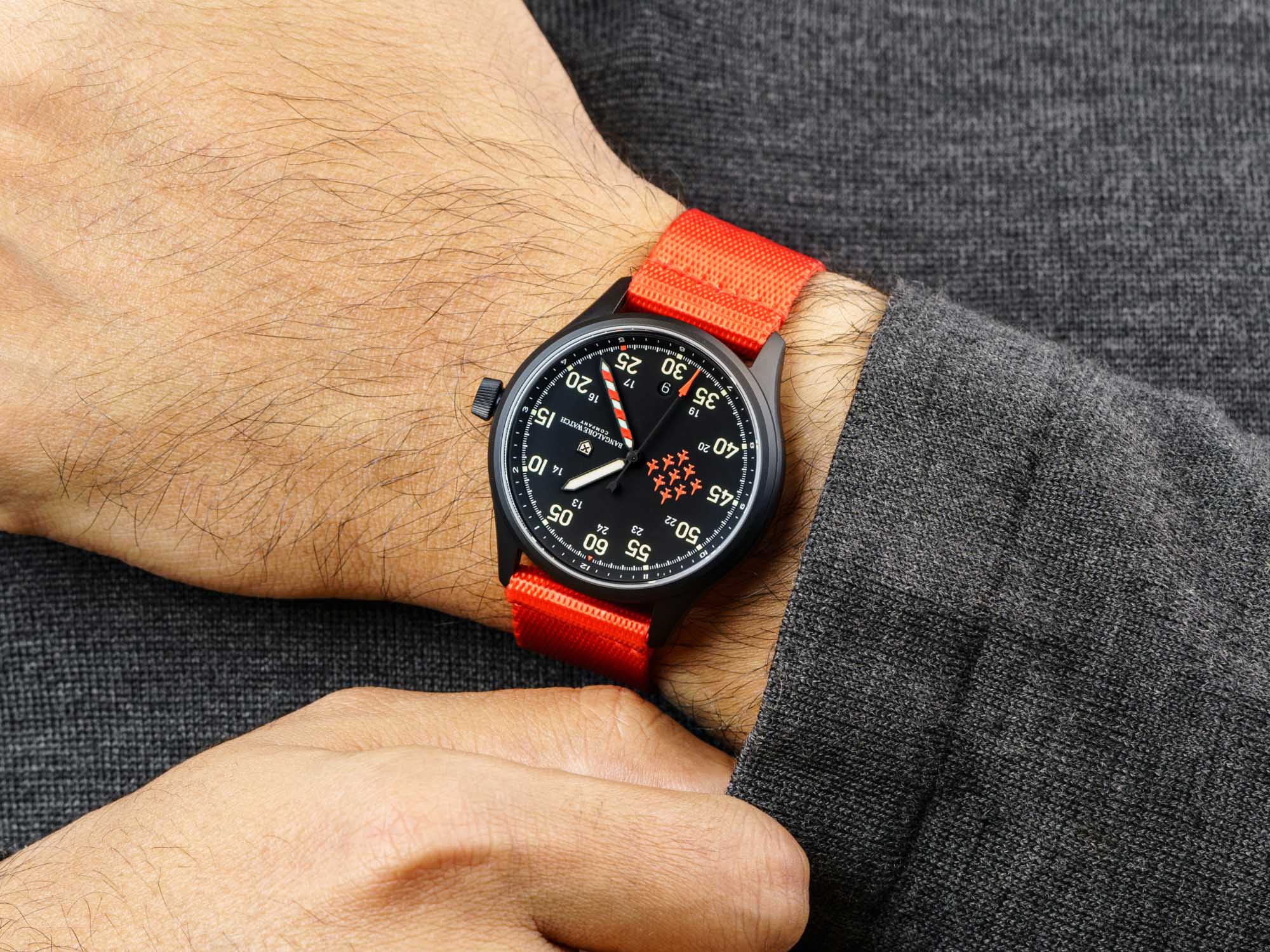 As the model is intended to celebrate the 25th anniversary of India’s most prestigious formation aerobatics team, production of the Bangalore Watch Company MACH 1 Synchro will be strictly limited to 125 examples worldwide, and the watch will be accompanied by an official retail price of approximately $1,950 USD. Additionally, each one of the 125 commemorative pieces will be uniquely numbered and will come in a special collector’s edition box set. For more information, please visit the brand’s website.