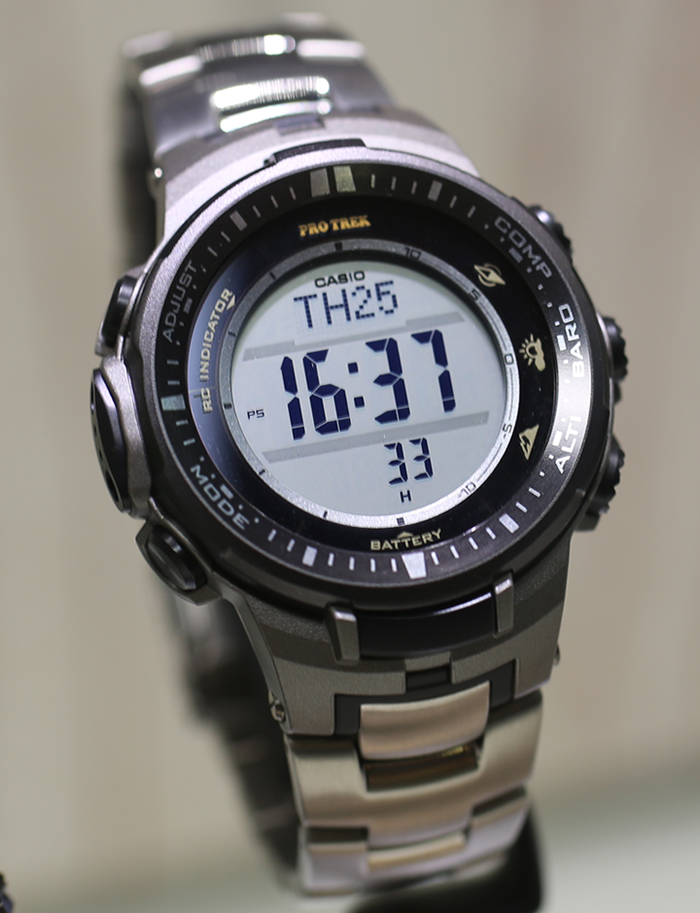 The Casio PRO TREK PRW-3000 for 2013 has been announced, and let me tell you why I am particularly interested. In a nutshell Casio has released a smaller, sleek looking, very capable PRO TREK watch with improved sensors (at a reasonable price).

You probably know that Casio PRO TREKs are found on the wrists of people engaged in all manner of outdoor activities, on mountain trails, in deserted places or for everyday activities where risking a very expensive watch is not an option.

I have always been interested in compass watches in some form or another due to a latent survivalist mentality that wanted to anticipate what equipment I would need in a disaster scenario. Aside from food and water, a compass watch would always be in the mix, so that I could, in my hypothetical emergency, find my way somewhere to safety.

This obsession is almost laughable now that I think about it. Back in the days before the PRO TREK, I bought several of the early compass watches that Casio had introduced to the market. I put up with them as best I could but back then, the compass indicator did not float, and that was a bummer. The Suunto Vector that came next was nice, but I couldn’t handle the pain in the ass battery change which always left me wondering if the water resistance seals were tight.

I can even say that I bought the first Casio PRO TREK that ever came out. That one worked really well, but it was too big and I gave it away as I could never bring myself to have a boat anchor on my wrist.

It was finally in 2005, that I stumbled across a Casio shop in Tokyo that I found the one. It was the Casio PRO TREK PRG-70 in black and it was the answer to my prayers. Not only was it the most compact PRO TREK I could find, it had all the whizz-bang features of the first one, and also Tough Solar, meaning no more battery changes and no more worries. 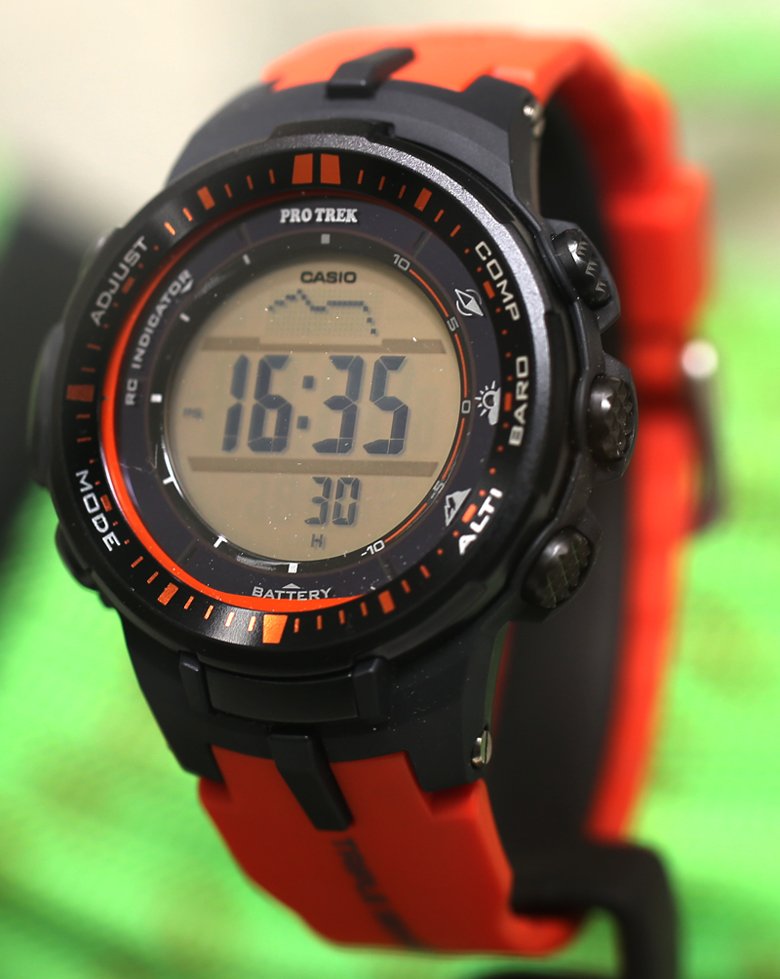 I withdrew from the passing parade of PRO TREKs that came after as I was now satisfied. This watch could do everything well enough and the feeling to upgrade never came. My PRO TREK has served me well and even as I started to get interested in other watches, it still is to this day, stuffed somewhere in my bag when I travel.

A Casio PRO TREK is tremendously useful when traveling. I have used the compass function in many scenarios aside from the obvious ones. It is useful when getting into subway trains in a foreign country to check if it is going in the right direction and by implication, if you are on the right platform. Or when you suspect that a taxi driver is cheating you by driving in circles or away from your destination. The compass function will always set you right by informing you of any potential deceit. My PRO TREK has even told me my altitude when I was lost in the mountains of Zermatt, Switzerland and far away from help. Used in conjunction with a map, it probably played a part in saving my life. (But that is a story for another day.)

As a beater watch, it has had no equal. I throw it about, stomp on it, even took it diving to 20 meters once, and it has always been reliable and unquestioning, delivering what it promised from the day I bought it eight years ago. 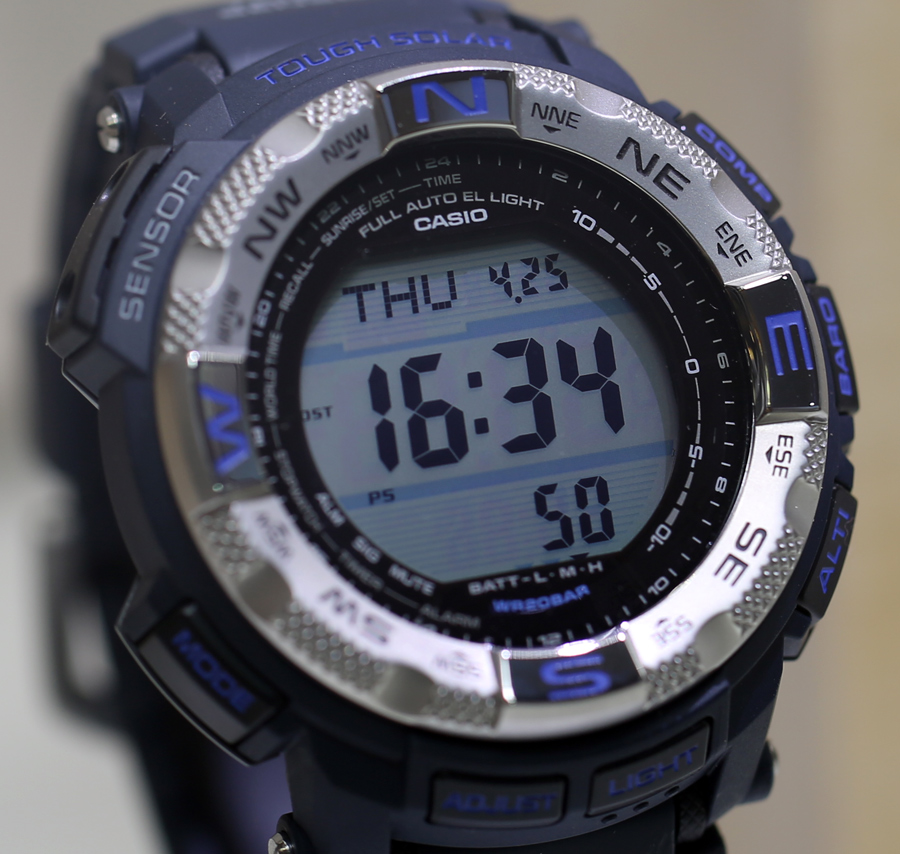 With such a relatively long preamble, I think I have set enough of a scene as to why the new PRW-3000 might be the watch to get when (or if) my current PRO TREK dies.

You see, the  new Casio PRO TREK PRW-3000 watch features an upgraded sensor for all its major functions, including compass bearing, altitude/atmospheric pressure, and temperature measurement, which as Casio informs me, has been significantly improved since the last advance of the system in 2002. Improved sensors means faster reading times as well as more precise readings. Casio says this was done to close the gap in competition with Suunto. 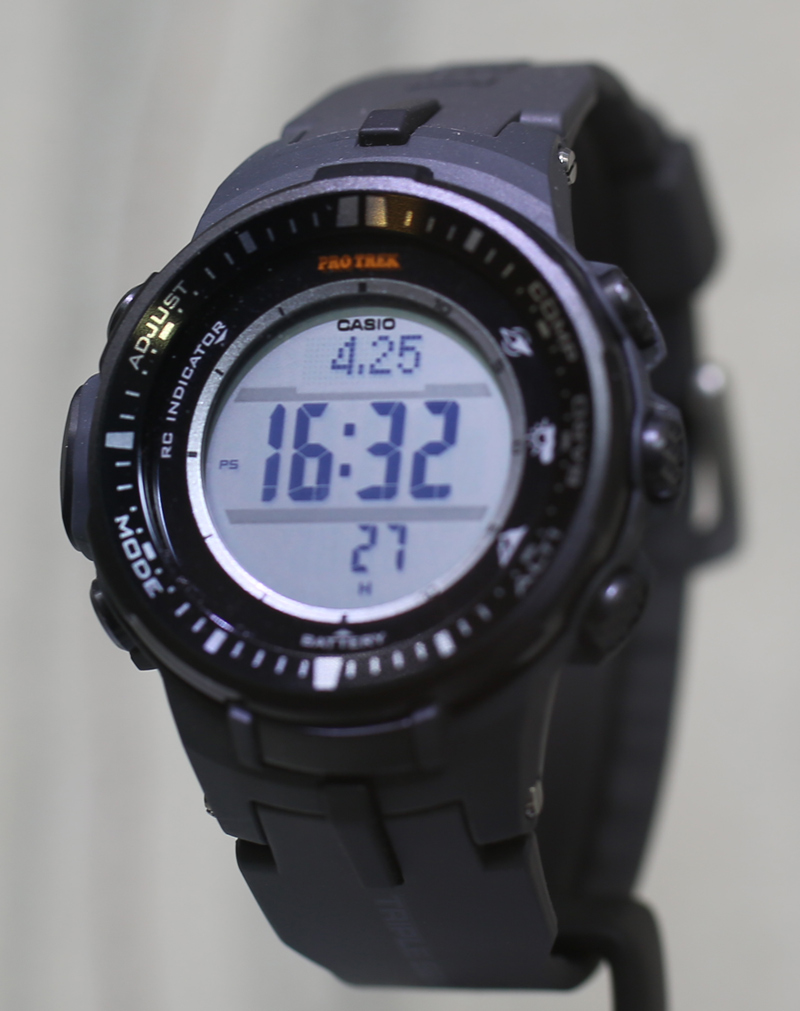 That’s like Intel releasing a new generation chip with everything the same, only faster, smaller and more reliable. That is surely significant. The “Triple Sensor Ver. 3” as it is known, features revised sensors, algorithms, and LSIs (Large Scale Integration). So what does this in practice mean?

Well, the direction sensor consumes only 10% of the energy and takes up only 5% of the space of the previous sensor. I read that again to make sure that I had read it correctly because such differences are simply amazing. The first benefit to this is that continuous measurement of the compass bearing has increased from 20 seconds to 60 seconds (so you can view it longer). 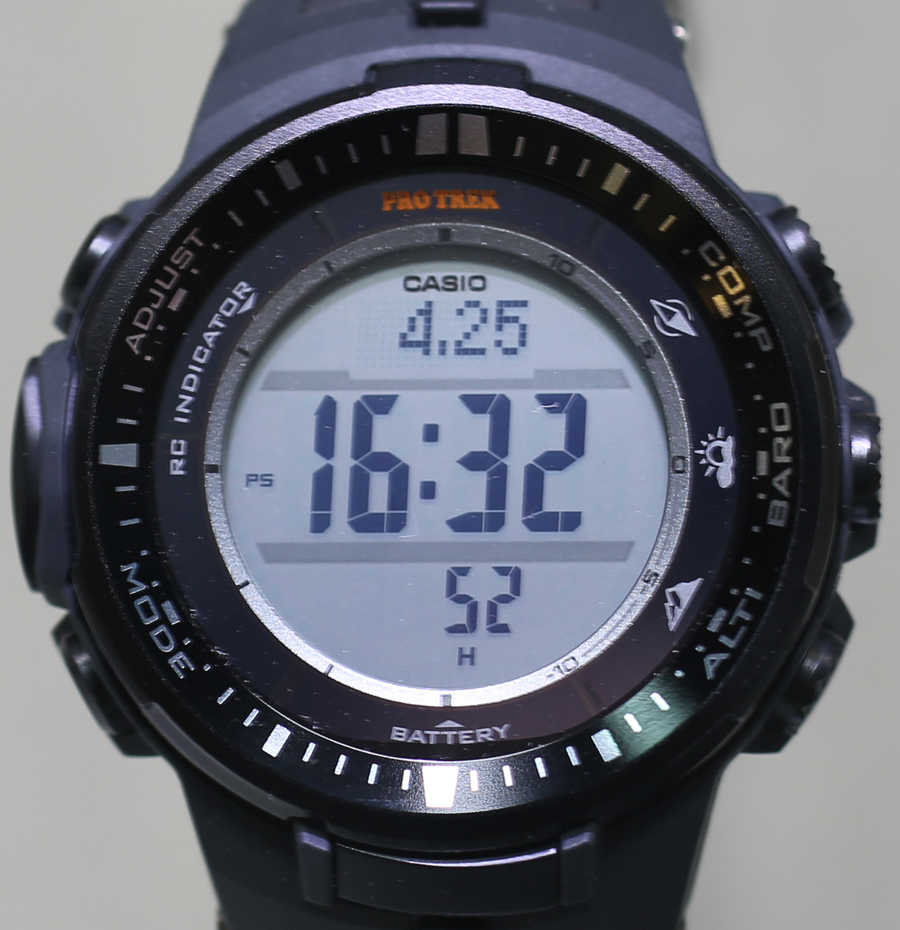 I know for a fact, that this is an exceptional upgrade. Out in the field, using my old PRO TREK, taking compass bearings was always a lengthy process of comparing landmarks to a map. The time to do this always necessitated another bearing to be taken after 20 seconds as the recorded bearing would be frozen on the screen. With the floating compass live for up to 60 seconds, now we’re talking. The longer time window means a proper bearing made and less fiddling about with the watch.

Then we have the LSI calculation power increasing significantly to reduce altitude measurement time from five seconds to one second, and also with an improved accuracy from five-meter to one-meter increments. This is a welcome enhancement even though it really only makes sense when measuring in a moving vehicle as opposed to being on foot. Still, a one meter increment is way better than the five I have been used to. With a map and properly calibrated to altitude, this offers a better precision that I will take any day. 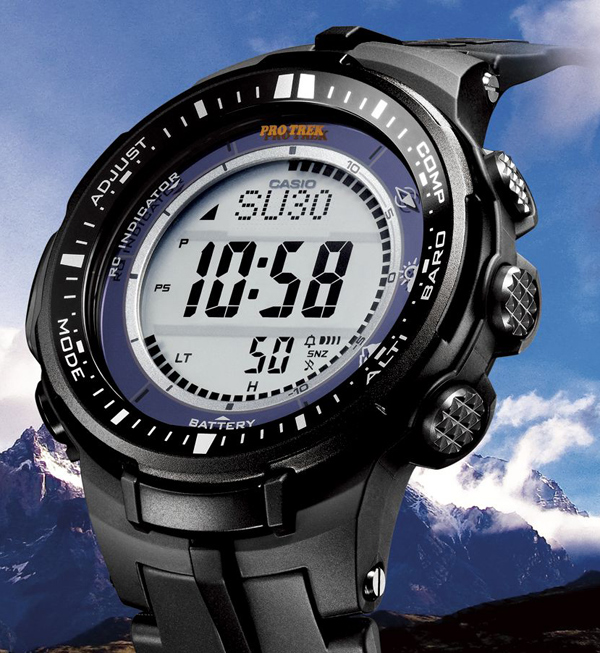 Of course, the last improvement that really gets me excited is the smaller case size. I have already mentioned above that the new sensor is only 5% of the size of the old one. This therefore makes possible a smaller case size, which if you’ve followed my story, is something that I am most partial to. Looking at the pictures, it seems that the case is also flatter which means a better fit under thick jackets in the wilderness. 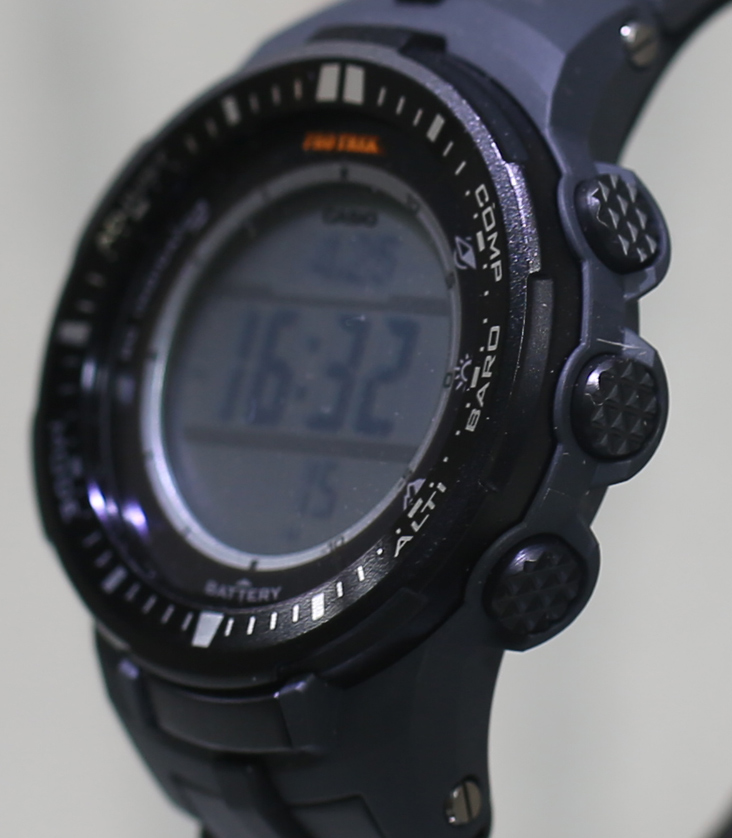 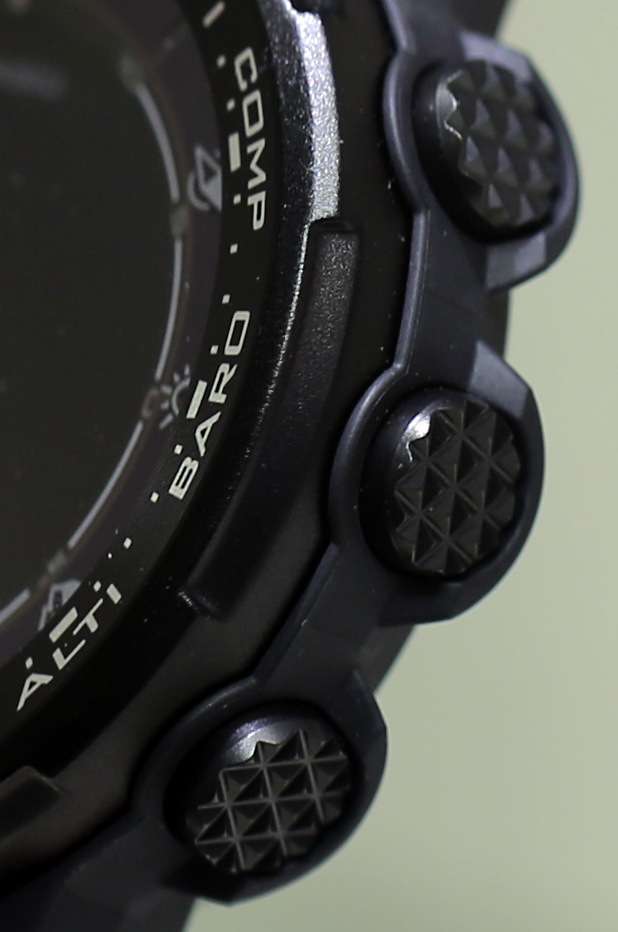 The last thing that this watch can do is to receive radio waves from atomic clocks to set the correct time. You might already be familiar with this function from other Casio watches, so its just to let you know that its part of the feature set. Me? Well, if I get this watch, it’ll be new for me and certainly one more reason to put my old PRO TREK in a museum. New for this piece is that it also receives the atomic clock radio signal in China.

Casio will produce a range of the PRW-3000 collection watches, with some nice colorful variants. The new size is great as well. The flagship model will come with a titanium bracelet and be priced at about $400. Other models with resin straps will be about $300. Look for them soon. protrek.com