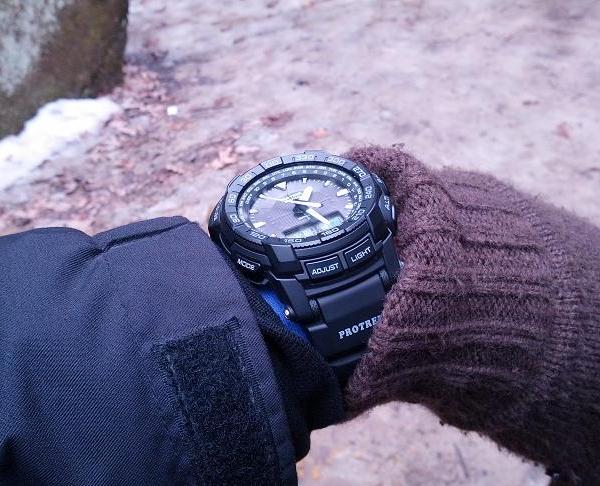 It was a delightful surprise when I was contacted by Ariel, and was told that I won the monthly drawing contest for a Casio Pro Trek watch from aBlogtoWatch. While I like to consider myself a watch enthusiast, I had to admit that I had a severe lack of adventure/sport watches. While I had the standard tool watch, or the long lasting quartz watch, I didn’t have a watch where if I were to get lost in the woods, or I had to jump out of a plane, I knew that I would be able to focus on whatever is at hand, and not worry about my watch failing me, much less helping me survive.

The watch comes in a pretty nice wooden (pine?) box. It is fairly Spartan, but it does exude the sense of adventure and exploration that this watch was marketed towards. Plus, at this price point, I’m just glad that it didn’t come in a clear plastic box. The instruction manual is large, but easy to understand and covers most, if not all of your questions regarding this more-complicated-than-usual watch. 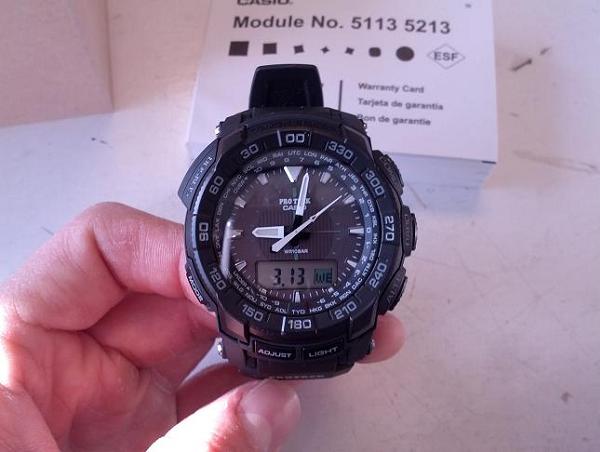 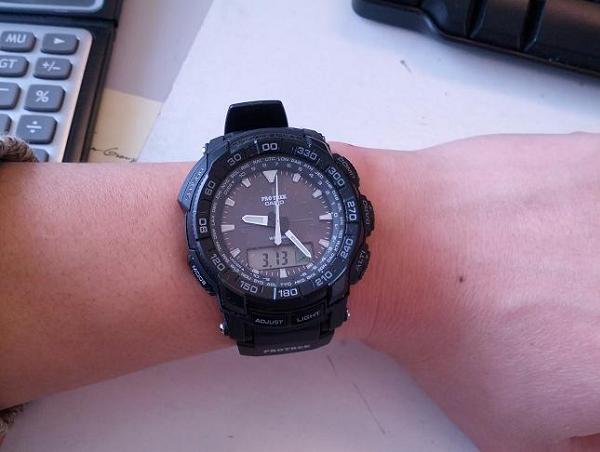 With its matte black band and case, coupled with its dark grey face and white hands and markers, it is an understated watch. The dark color scheme makes it very versatile in the fact that it doesn’t scream for attention while also not seeming to try too hard to be “stealth.” The inclusion of an analog watch face coupled with a digital face adds a touch of class and maturity which greatly prevents the watch from coming off as cartoonish or childish. Wearing the watch out in the city or in the outdoors, I do not find it embarrassing for an adult to wear this watch out in public. When I had received the watch, I was wearing my Seiko Black Monster, and I used it to make a few comparisons. First, while the Casio is much bigger in case size, on the wrist, it doesn’t feel uncomfortable because of the taper at the lugs on either ends of the case. It is also MUCH lighter.

One thing that I have an issue with is the “bump” at the tail end of the strap. I assume that the reason that this bump exists is to prevent the strap from ever slipping out from the retaining ring, but all it really seems to accomplish is the wearer having to use extreme force to rip the strap free of the ring when I take off the watch. It requires so much force that I feel that I may damage the strap or ring every time I decide to take it off (it hasn’t happened yet, as far as I can tell), which in turn takes away from the overall enjoyment of the watch and makes me want to not wear it at times. On a general basis, I want a tool type watch to not only be able to withstand the daily rigor I may place on it, but also be comfortable to live with. This key point actually makes the watch fail in my eyes as a daily wearer as opposed to some of my other watches.

The Black Monster is known for their lume, and since the Casio Pro Trek has both lumed hands as well as an LED light, a comparison had to be done. In the near pitch black (of my bathroom) you can see that while the Casio’s lume is serviceable, the Black Monster is much brighter. This is coming from a watch that is at least five years old, so the famed Seiko lume reputation is well earned. The LED light function, when activated, glows very brightly from the bottom of the dial and makes the watch hands extremely easy to read. The problem with this is that there is only one LED, which creates shadows on the dial, making the LCD screen almost illegible. Still, if one were to need to know the time hours after it got dark, the Casio Pro Trek would be up to the task. 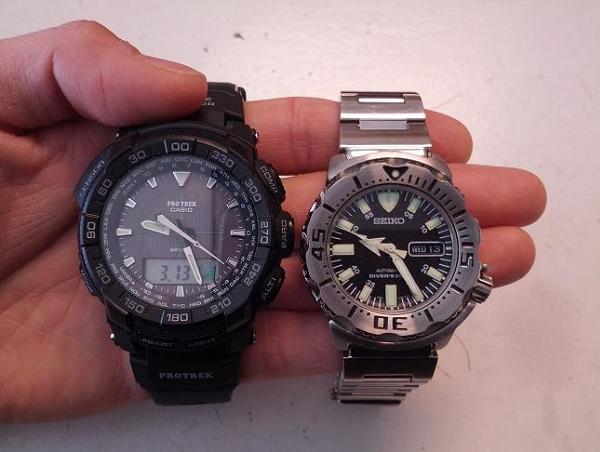 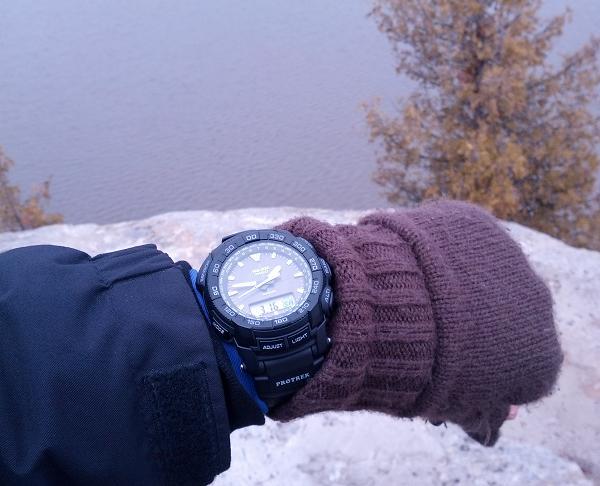 For my contest entry, I had submitted that one could use this watch for extreme activities (such as cliff diving) as well as for more mundane activities (light swimming), where one would not necessarily require a watch, but could benefit from having one. Unfortunately, while I am slated to cliff dive this year, it will not be until late May, and my current city of Chicago is a bit cold yet for outdoor swimming. However, I did have the opportunity to take it out for an extended hike. This watch is perfectly suited for this type of activity. With the compass, altitude and temperature sensors, the Casio Pro Trek accurately relayed the pertinent information to me, of which I could check with the information posted at various locations on the trail. If I were to get lost in the wilderness, I would be able to use this watch and a map to accurately locate my position to find help. The one sensor that I couldn’t test with the information I had was the barometer, as I had no other metric to compare the data to, however from what the other sensors detected, I suspect that it is fairly accurate. If I were planning on doing any extreme activities, I would think that the watch would excel where few would.

Other very handy features include the multi city (GMT?) function which tells you the time in major global cities, and the alarm feature which allows the user to set anywhere up to five daily alarms. Lastly, when listing the benefits of Casio watches, one cannot leave out the solar charging ability. This is the one watch in my stable where I know that if I were to leave it somewhere it can get sunlight, I will not have to worry about it ever stopping. If I had to point out one quibble in functionality, it would be that there seems to be no AR on the hardened mineral glass, which does cause some glare at times. This seems to be worse in pictures than in the flesh however and doesn’t cause anything more than a slight inconvenience as you would have to tilt your wrist to find another viewing angle. 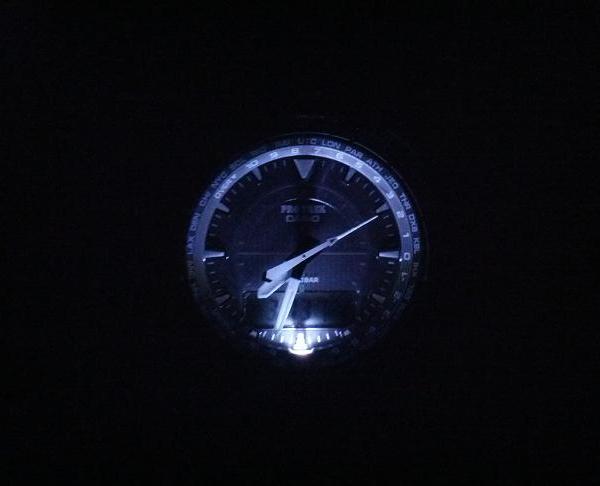 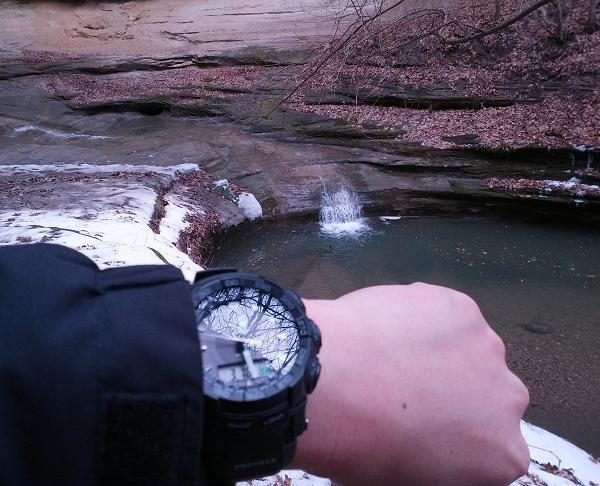 With the exception of a couple of very minor detracting points and one moderate personal issue regarding the strap, the Casio Protrek PRG550-1A1 is a win. It delivers on what it promises to do and does it better than almost anything else, all at a price point which makes it almost unbeatable. Its only major competition may come from Casio’s own company in the form of the Casio G-Shock models, but with the focus of the Casio Pro Trek line on exploration, adventure, and sport; I don’t anticipate there’s too much cannibalizing from each other. From my stance of only owning and wearing mechanical watches to becoming a convert to Casios and their tough, solar powered watches, I definitely plan on wearing the Casio anytime I need a dependable bulletproof watch, whether that is in the wilderness, or relaxing on the beach.

I’d like to thank Casio and aBlogtoWatch for providing the amazing watch, and also for maintaining the best watch blog on the internet.

Ed. note: And thank you Brian. To everyone else, please visit our Ritmo Mundo Persepolis Triple Time giveaway this month in April here.