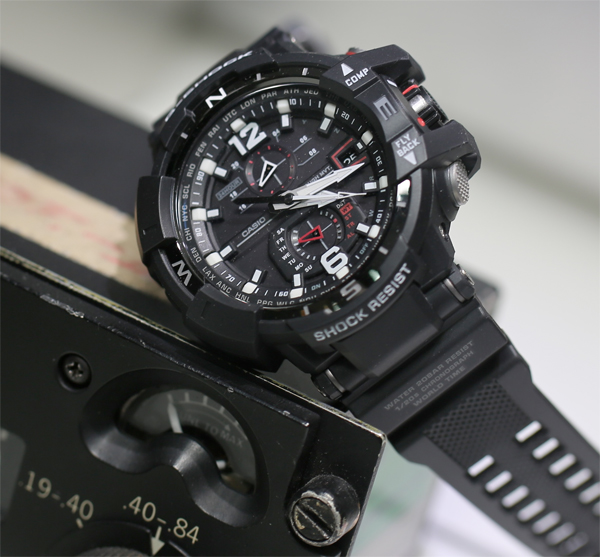 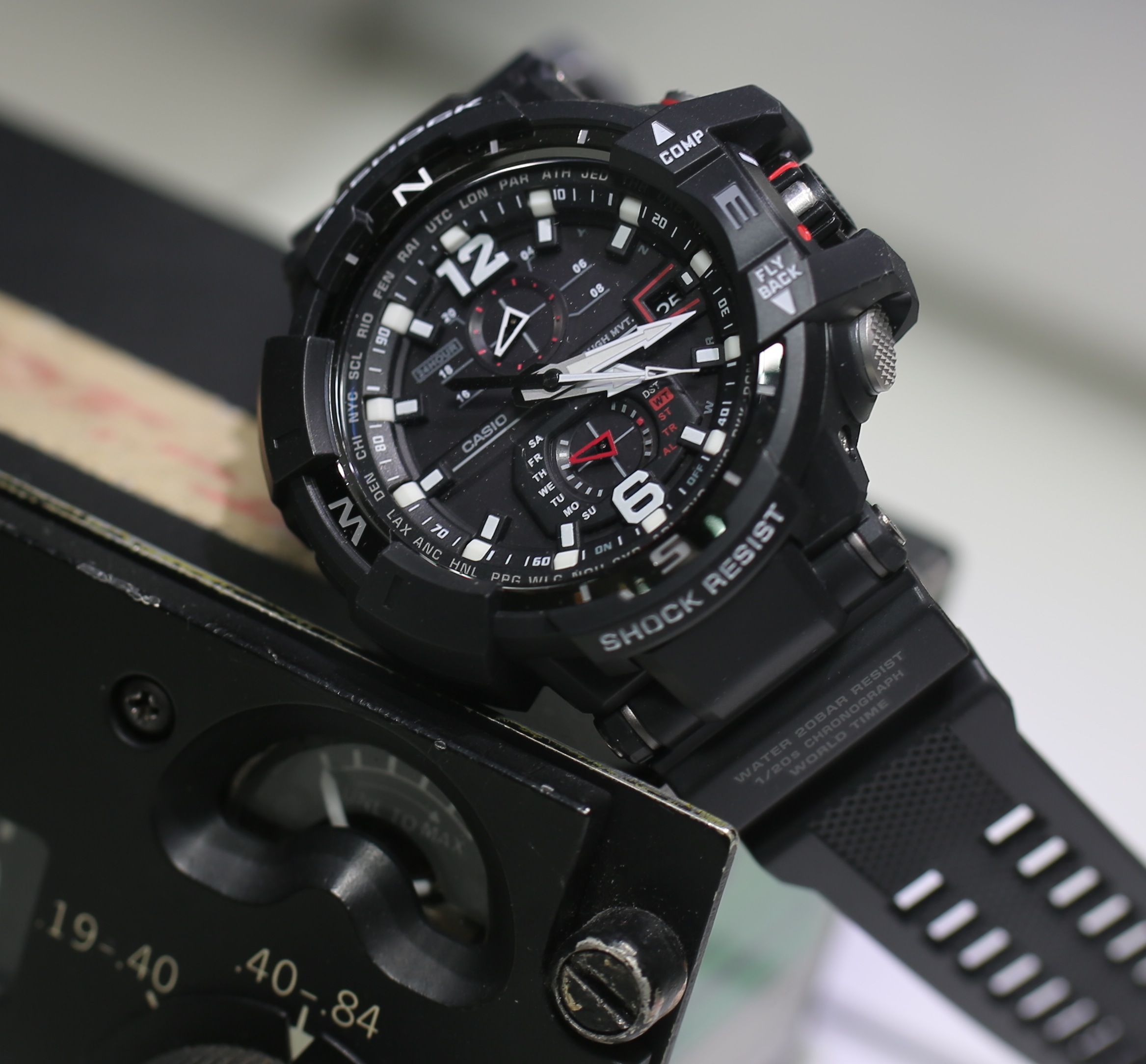 It’s Baselworld, the time of genuinely fascinating new watch releases and Casio does not want to disappoint. New models in the Gravity Defier series have been announced: they are heavily loaded with technology and are built to resist such centrifugal forces only fighter pilots could submit them to.

First, we have the flagship, analog, GW-A1100, now featuring an advanced compass function and other enhancements. The analog-digital GA-1000 is an addition also featured at Basel, also based on an aviator concept. It has improved overall and with night-legibility, is not shy of features.

Click any of these images to see details in larger images. 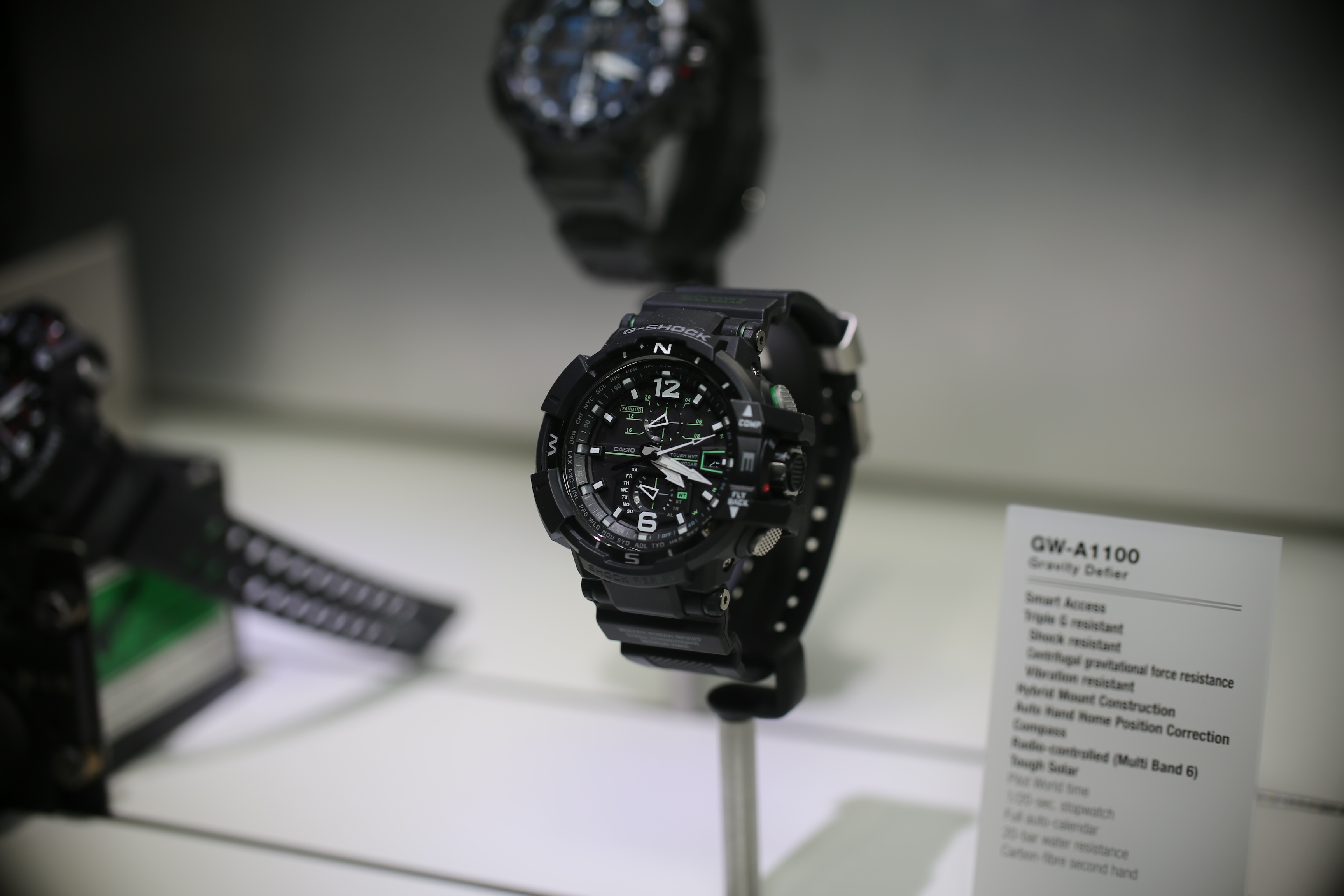 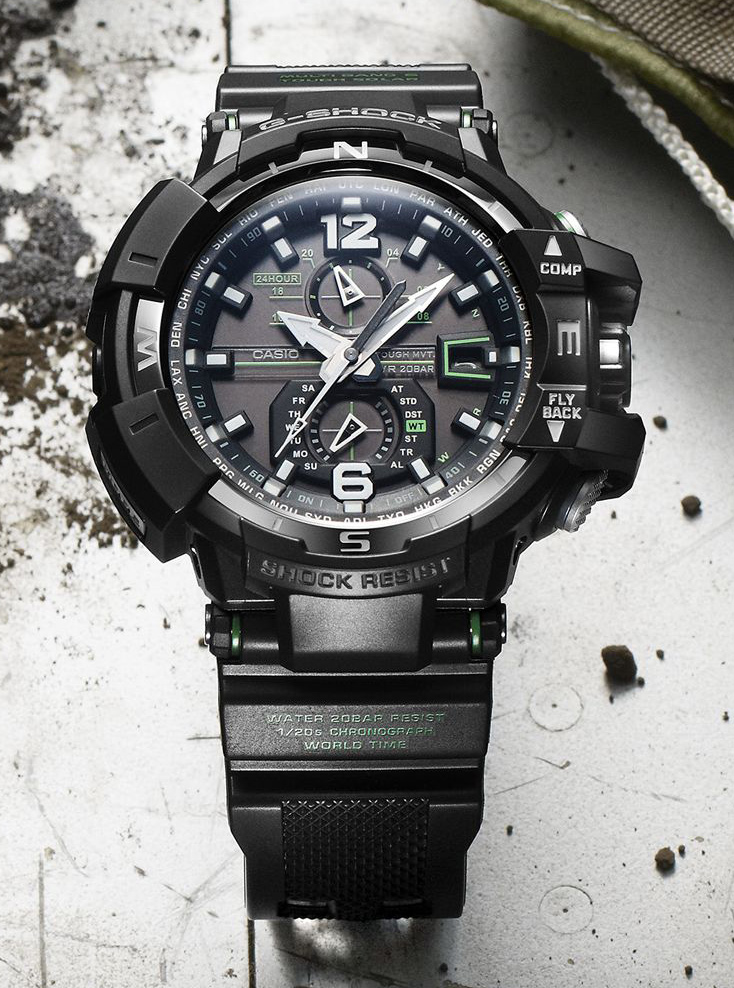 Let’s start with the top-of-the-line GW-A1100, the new flagship of the G-Shock Gravity Defier series. As you can see on the image above, it has an all analog face, but that doesn’t mean a loss of functions. On the contrary. For starters, the watch now incorporates a digital compass, just what was missing in its predecessor. The way it works is simple enough: the second hand (constructed from carbon fiber) is used to indicate the compass bearing. With its seamless measurement ability, it can guide you towards north for 20 seconds continuously. The magnetic sensor used is 1/20th the size of the one in the GW-9300, and now it is coupled with a unique noise reduction algorithm to assure high-performance. So it’s smaller, yet more reliable – attributes that do come handy in tight situations.

As a side note, while the luminous hands and three-dimensional indexes are impressive and should provide good and lasting legibility in the dark, there is no backlight function on this specific model. The GA-1000 is equipped with the LED backlight function, and we’ll learn about it next, but there’s more to be discussed about the feature-rich GW-A1100. 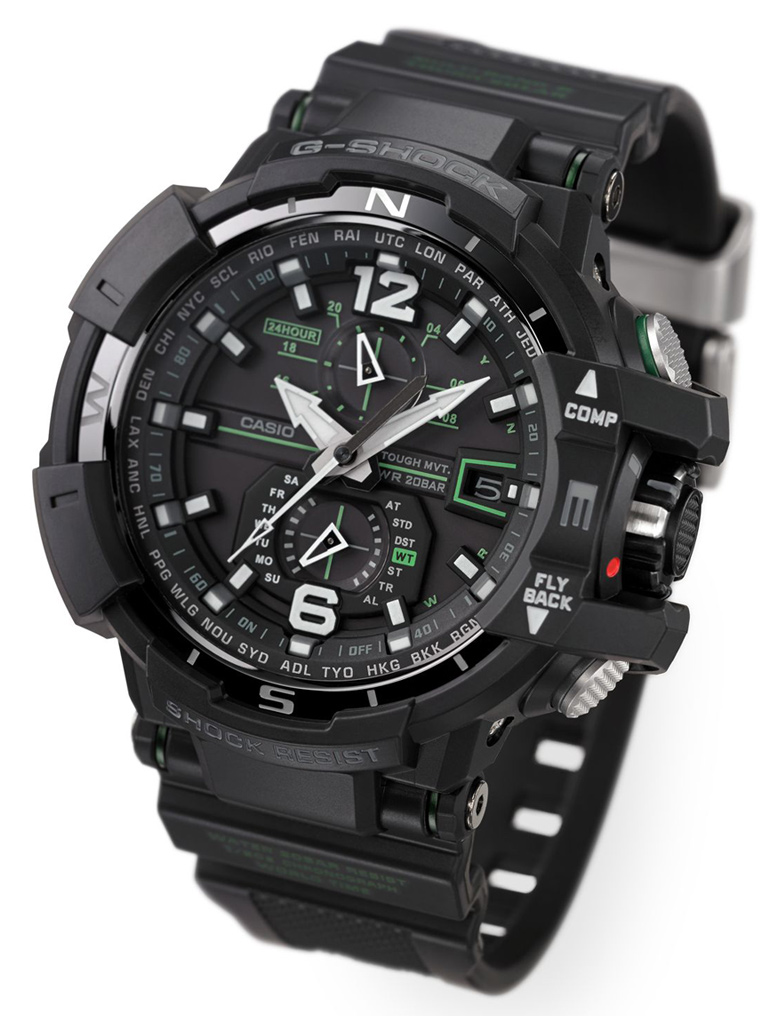 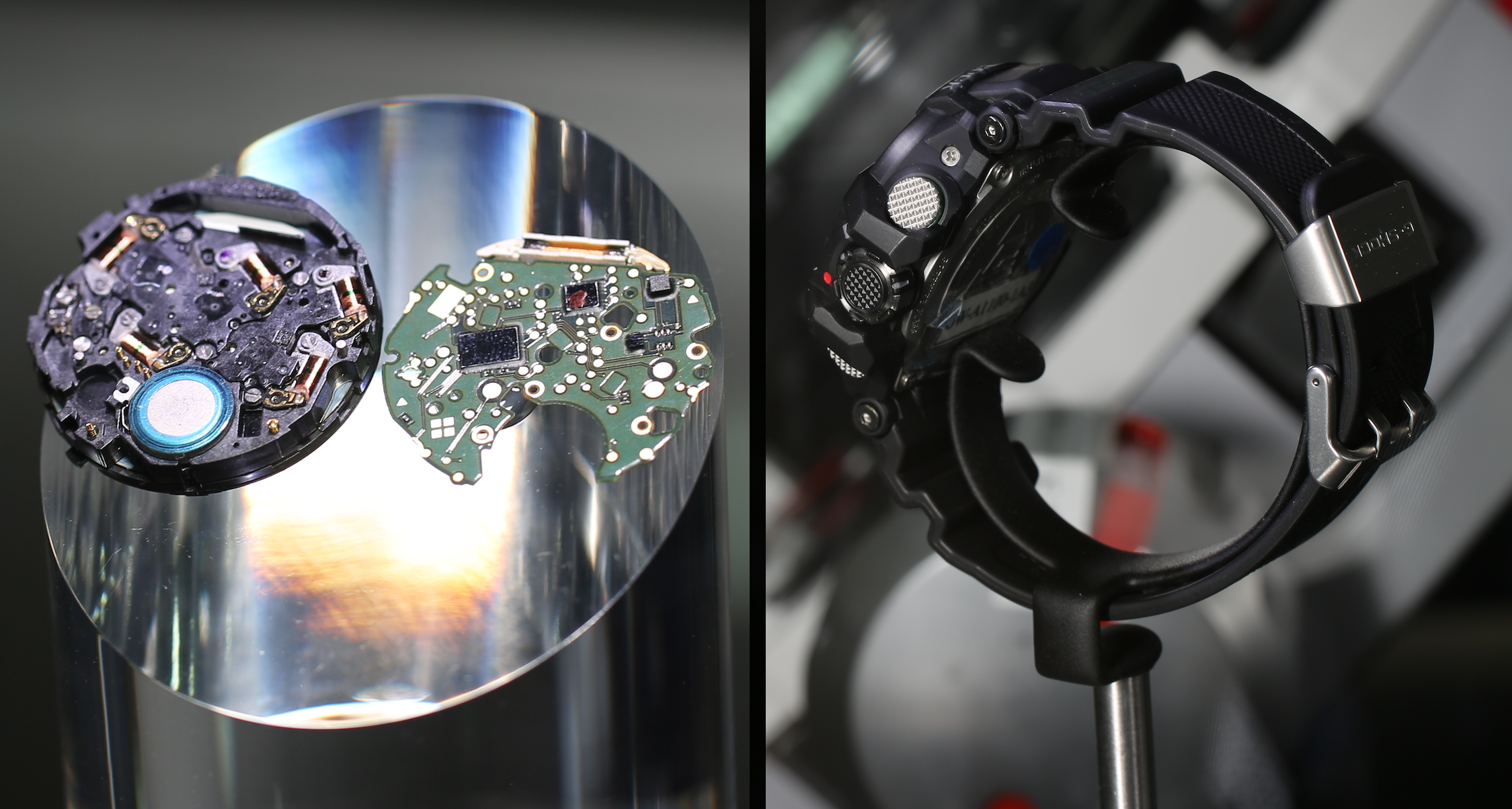 Ensuring you’re always on time with this watch around your wrist, is the Radio Wave Reception function. Allowing for up to six (except for China where it’s up to five) times of daily automatic reception. There are six frequencies worldwide, one each in the US, UK, Germany, two in Japan, and one in China. The 29-cities inclusive World Time shows the codes of the cities on the flange (the periphery of the dial) so when you are adjusting it, the seconds hand will point to the location of your choice.

The GW-A1100 has the “Triple G Resist” reinforced construction protecting the workings of the watch against shocks, centrifugal forces and vibrations. Just by looking at the images one can tell that this is a watch designed to be robust and ultimately be able to remain operational while putting up with extensive abuse.

Since we are looking at the high-end G-Shocks here, we can rightfully be looking for durability to be backed up with an extended array of functions – with easier access to them. Casio has been well aware of that, so the GW-A1100 will sport the Smart Access system to enable intuitive operation of the various functions – this should make using World Time, the stopwatch and the alarm easier and faster. As a final enhancement to the overall user-experience, these functions will be easy to get the most out of with the crown switch, which has a quick-lock mechanism enabling simple lock-and-release. You can see the crown side of the watch in high-resolution after clicking on the image above. 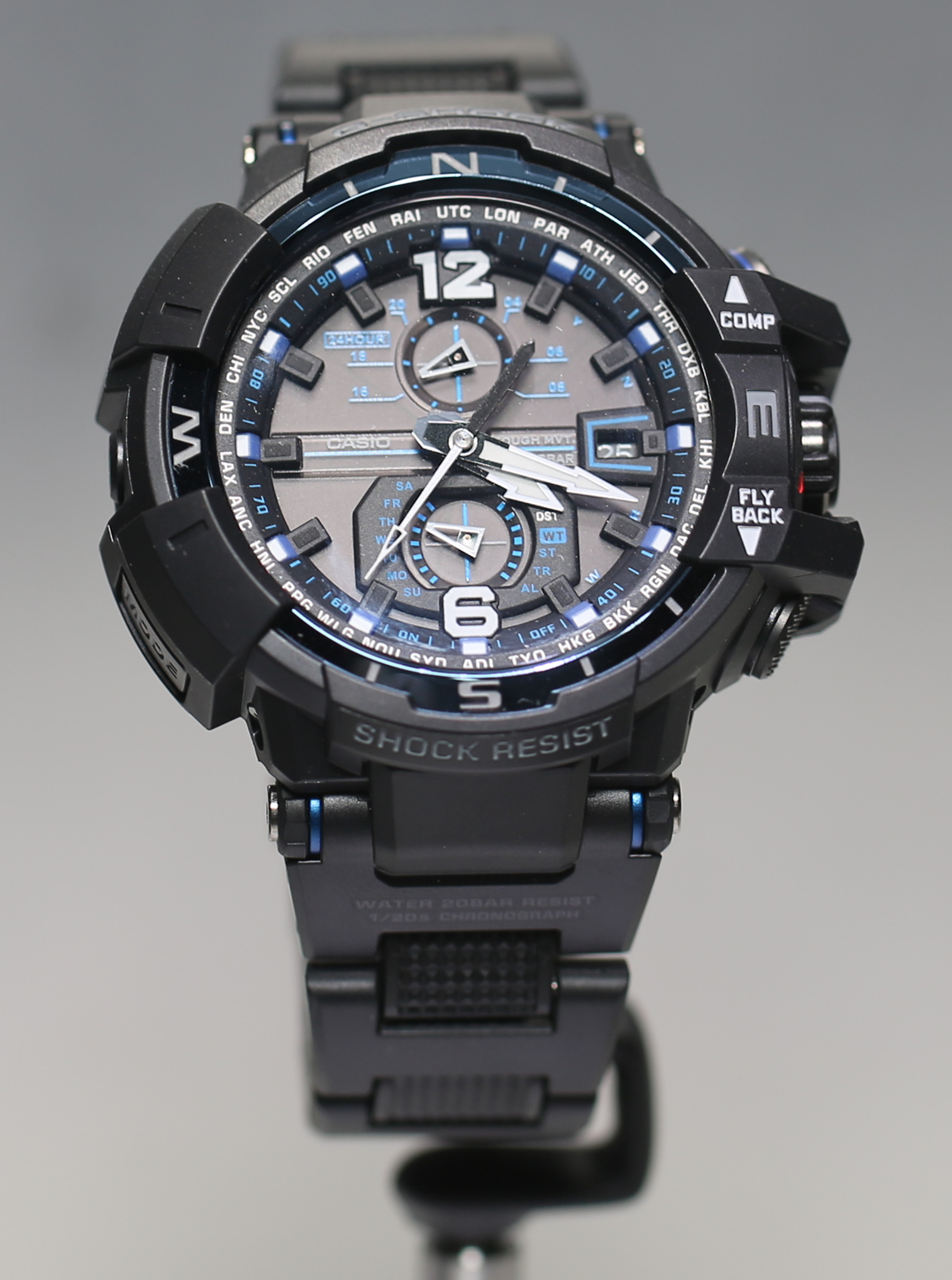 It’s easy to get the point of Casio: when they say “flagship,” they want to back it up with some of the nerdiest – and coolest – stuff there is. To top it all off, with the “Tough Solar” charging system you are set for 29 months of operation with the power saving function turned on, making this a fantastic choice if surviving in extremely demanding (and dark) places is your hobby of choice or, if you just simply love this kind of high-tech, useful stuff.

Casio showed us not only the analog, but an analog-digital model of the Gravity Defier series. Beyond the ways of showing time, there are some other important differences. 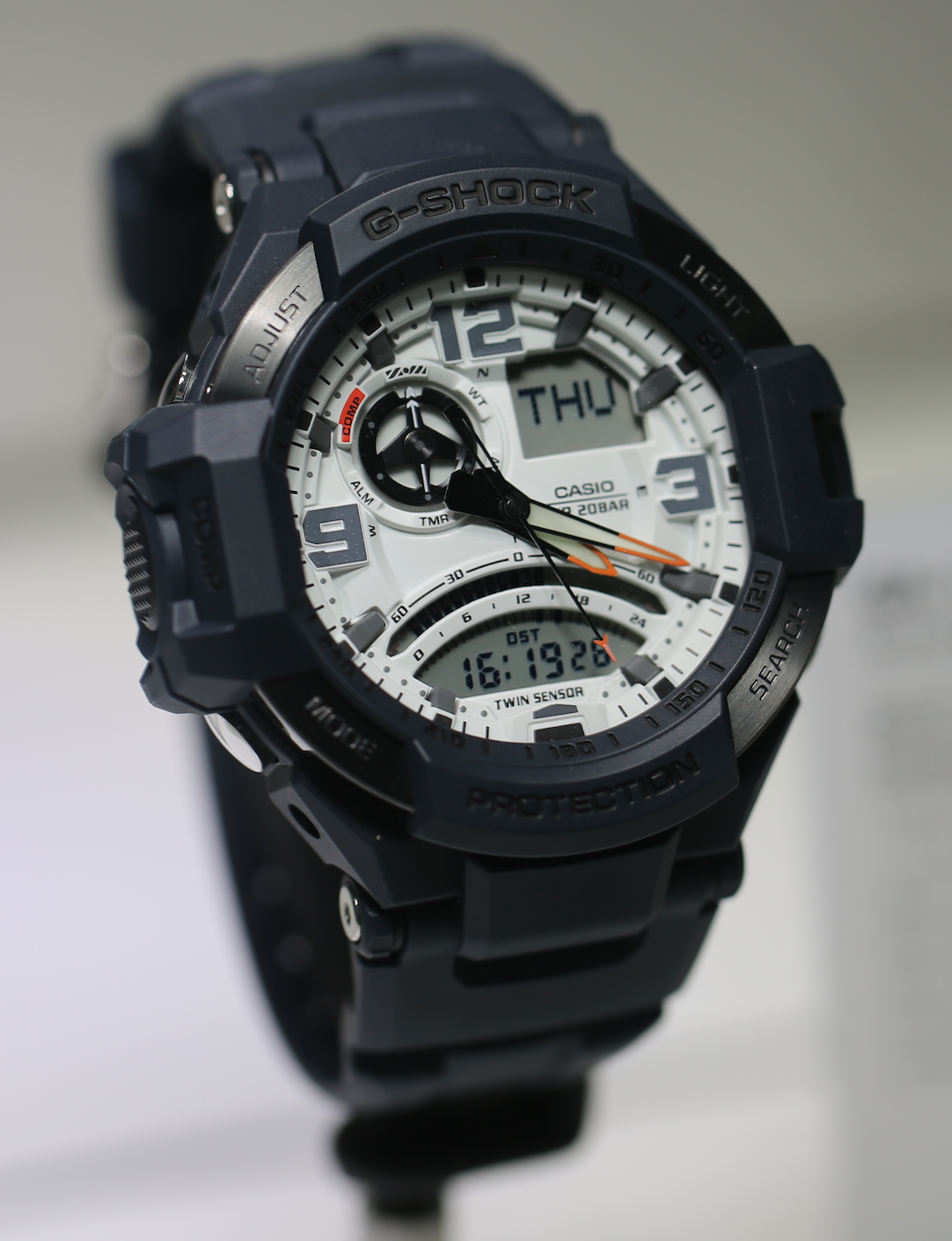 As you can tell from the image above (click on any image to see a larger view) the GA-1000 is a digital-analog watch, featuring a combination of digital and analog technologies at the same time. The analog hands are constantly indicating the local time while the digital LCDs provide world time.

New technologies are not spared in this release either, as this is the first analog-type G-Shock to be equipped with twin sensors for measuring compass bearing and temperature. That means that you get the hand indication of north with 20 seconds of continuous measurement, and you also get to see a displayed range of temperatures from -10 degrees to 60 degrees Celsius (14 degrees to 140 degrees Fahrenheit) making it usable under most circumstances.

The watch comes in three color combinations. Black on black, black and khaki, and blue and white. 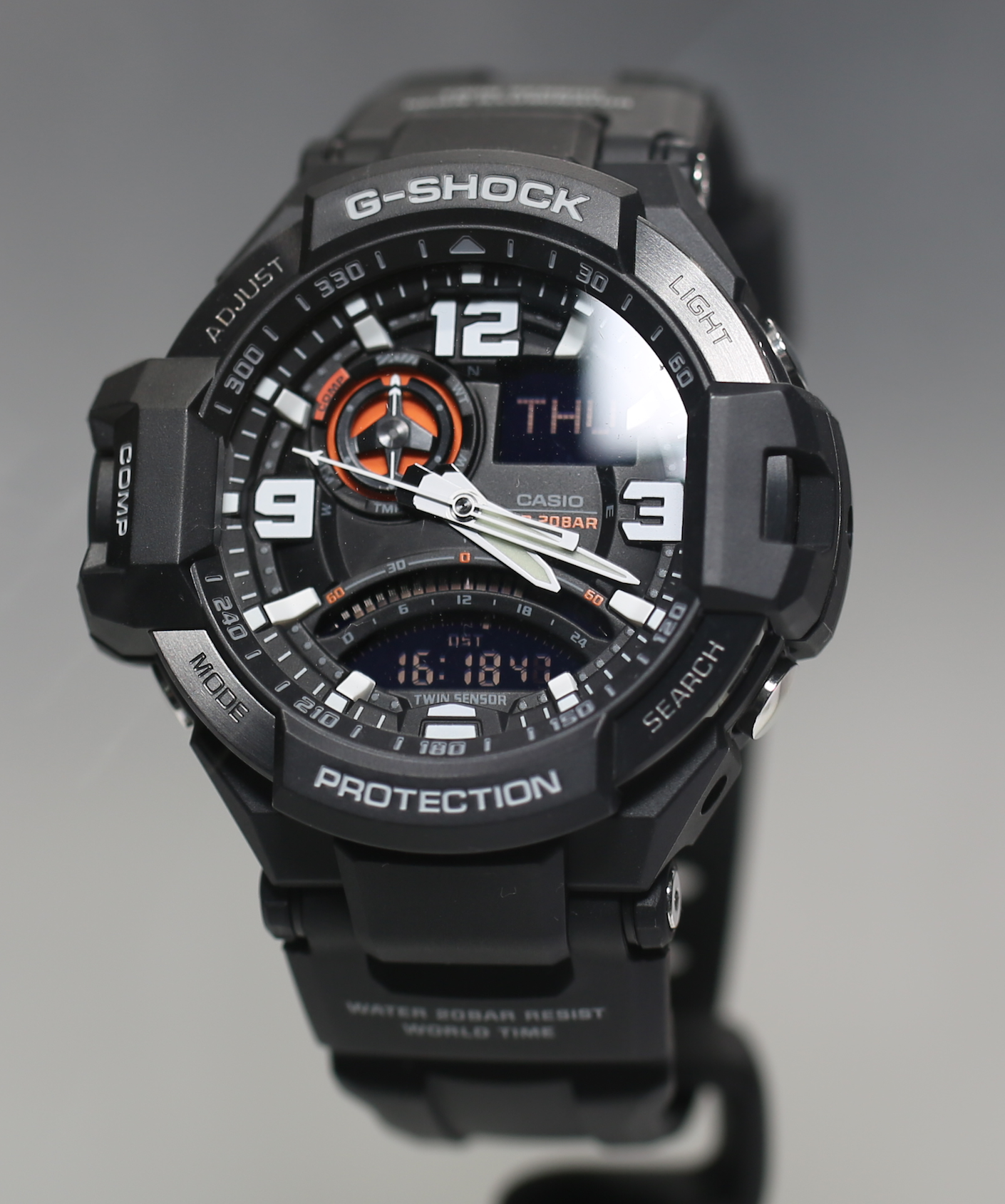 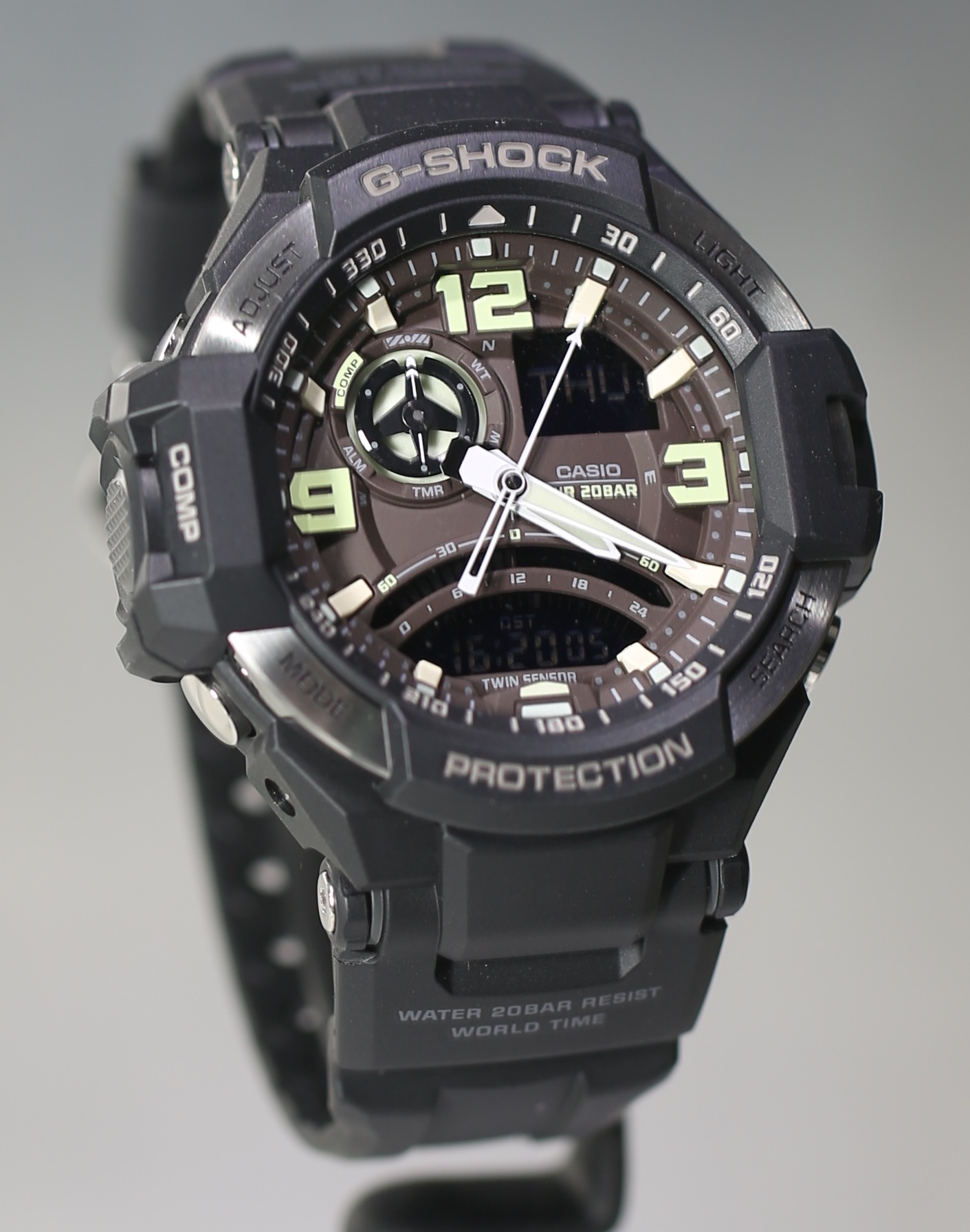 Its all-analog counterpart, the GW-A1100, lacks an LED backlight, but the GA-1000 is equipped with the Neon Illuminator feature which relies on an LED backlight to illuminate the hands and the indexes in blue and green.

Beyond the compass and the thermometer, the GA-1000 comes with a World Time function with 48 cities – 31 time zones, coordinated universal time, as well as daylight savings time. It also has a 1/100th-of-a-second stopwatch with a measuring capacity of up to one day, and a countdown timer. The watch itself is accurate to +/- 15 seconds per month (or half a second a day) when kept at normal temperatures and is said to run for about two years on a battery.

It’s a safe bet to say that with a watch like one of these Gravity Defier models, Casio wants you to be all set for pretty much any circumstance. Both the full-analog GW-A1100, as well as the analog-digital GA-1000 has you covered not only with the necessary functions required on a daily basis, but also are built to resist the not-so-ordinary situations like being the “victim” of overwhelming gravitational forces.