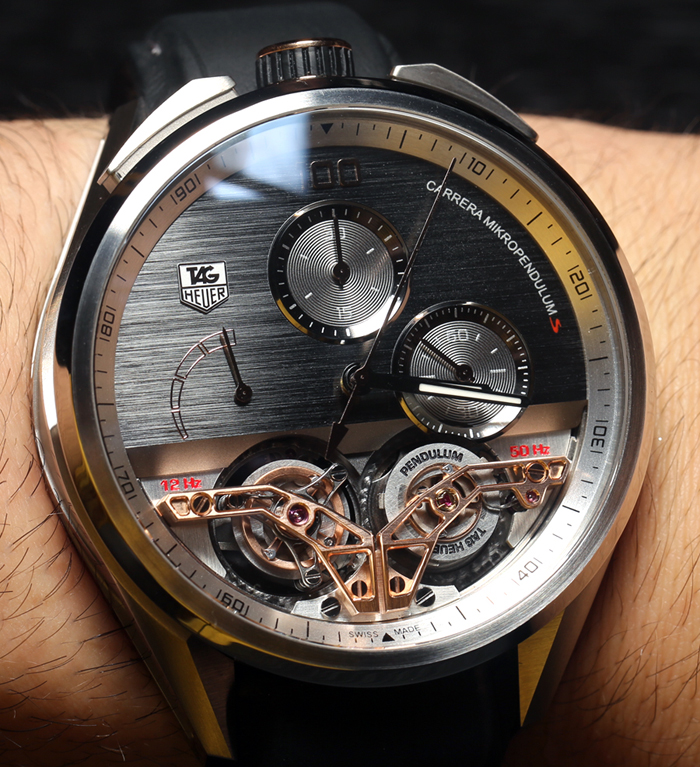 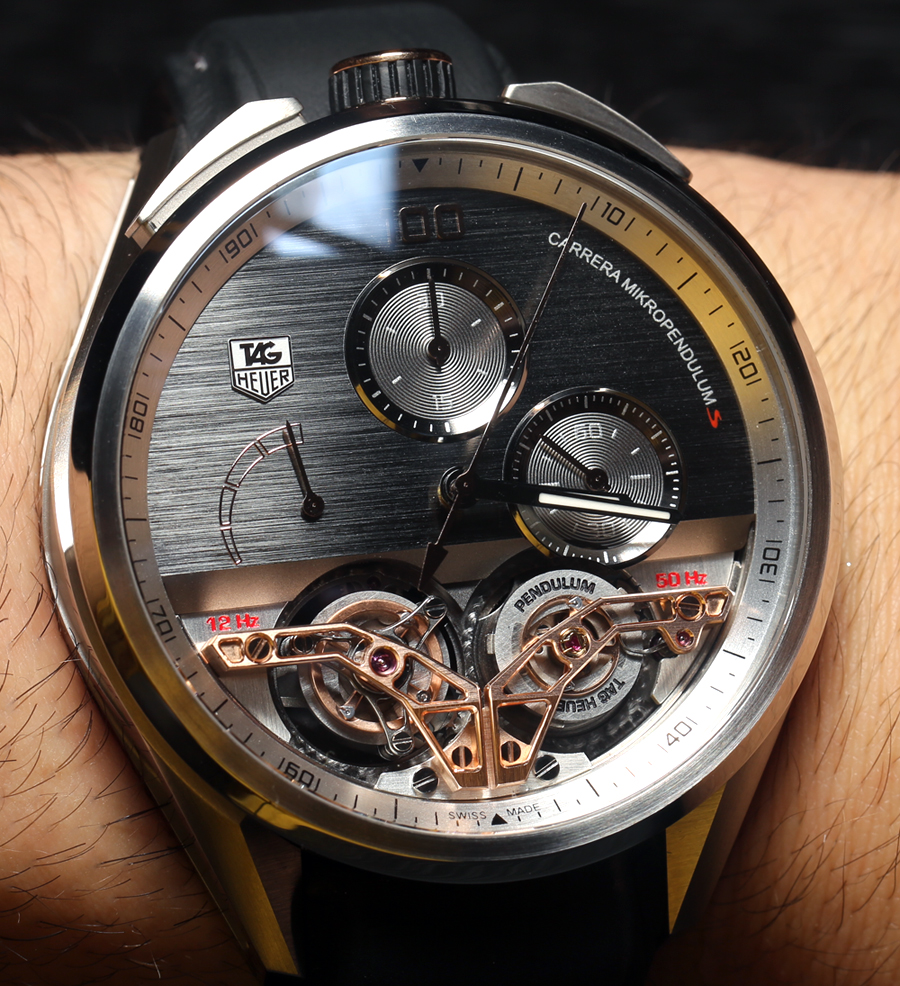 The TAG Heuer MikroPendulumS has just been announced and it looks to be a technical tour-de-force. Finally TAG Heuer has been able to perfect their pendulum magnetic escapement concept well enough to put it into a production timepiece. This journey started several years ago when TAG Heuer announced its pendulum escapement concept that used magnetism, versus a hairspring, in an escapement.

TAG Heuer’s MIKRO series of watches have already shown us hands which spin faster than any mechanical watch has any business doing. Witness the wonders of TAG Heuer’s MikroTimer, Mikrograph and MikroTourbillionS, watches that, while differing in key aspects, share that one single trait of notching up the adrenaline factor with sheer speed and the next level in the art of the ultra precise chronographs.

It is right that TAG Heuer is putting resources into developing this line of watches, because the chronograph complication is one that is intimately associated with the brand. While a high-speed chronograph is something that we have come to expect from TAG Heuer, it is what is added with this latest announcement, that makes the MikroPendulumS so unique. In a sense, you have an ultra precise chronograph with what will increasingly be an ultra-precise escapement.

The clue is in the name. The “pendulum” refers to the magnetic pendulums that have completely replaced the hairsprings found in traditional wheel and balance systems. First seen in 2010 in the time-only concept watch (the Grand Carrera Pendulum), this is a watch that turns traditional watch-making on its head by replacing the hairspring with what TAG Heuer calls a “magnetic pendulum.” This is basically a magnetized wheel pulsing within a magnetic field that drives the balance spring. Visually, it looks like an invisible hairspring powering the balance wheel. If that’s not the ghost in the machine, I don’t know what is. 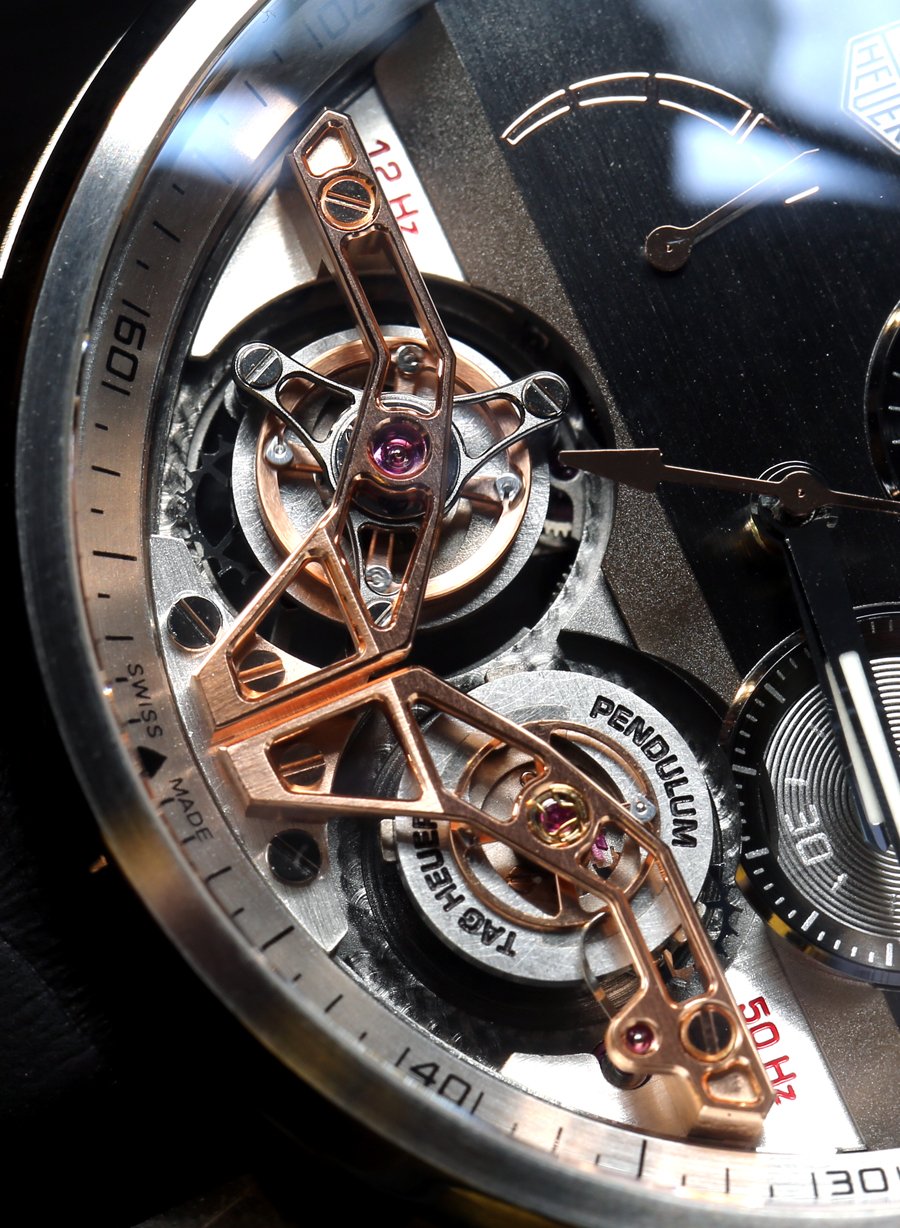 If you are familiar with the basic internal workings of a watch, you will know that the hairspring is the fine spiral or helical torsion spring used to control the rate of oscillation of the balance wheel. This thin bit of wire can literally be thought of as the heart of a mechanical watch, and its importance is in the fact that it reverses the direction of the balance wheel causing the back and forth oscillation that regulates the rate of power used and thus the timekeeping.  Now, removing all that and replacing it with this all new magnetic pendulum is unprecedented and certainly a horological landmark. This TAG Heuer isn’t quite ready for mainstream consumption, but it is getting there and it is good enough for application in special limited pieces such as this. 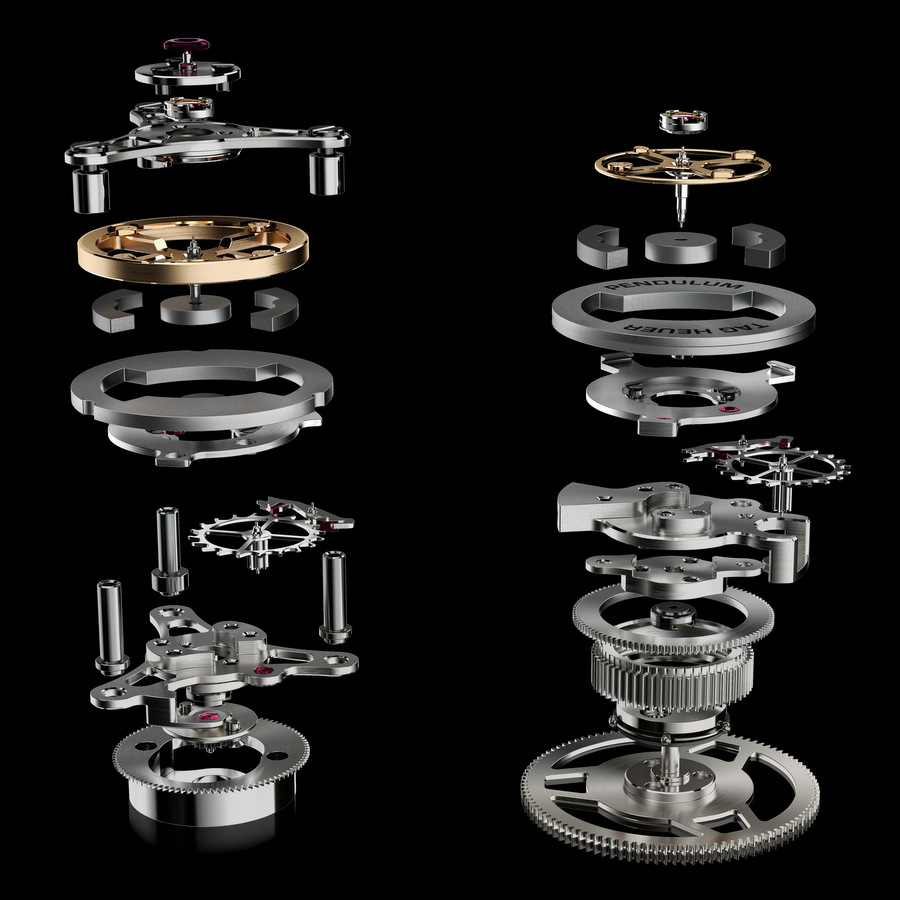 The advantages of TAG Heuer’s magnetic pendulum system is the elimination of gravity, shock and deformation related losses in timekeeping as well as ease of manufacture. However, the main disadvantage at the time of the system’s first appearance was that the generated magnetic field was still affected by temperature variations, hindering time-keeping performance. To this end, TAG Heuer has spent the past three years after the Carrera Pendulum, experimenting with new magnetic atoms, metal alloys and carefully dimensioned and machined geometries. Basically, a bunch of high-tech stuff that normal people cannot understand. All this work has resulted in the creation of a magnetic oscillator whose performance comes close to matching traditional hairsprings of the highest quality. 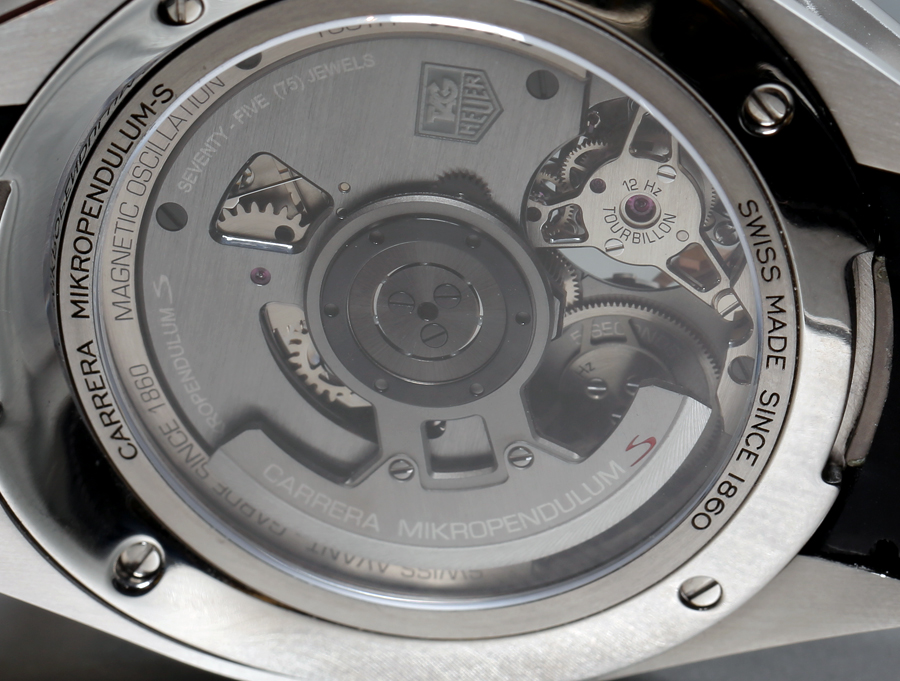 In celebration of this achievement, TAG Heuer has created the concept watch, the MikroPendulumS, a 1/100th of a second chronograph utilizing the double tourbillon layout we first saw in the MikroTourbillonS , and adding their latest version of the magnetic pendulum system to it. The result is nothing short of a masterpiece, and firmly shows off TAG Heuer’s haute horlogerie credentials in one watch. It is a great watch to play with, and it is a proof of concept of great things to come. 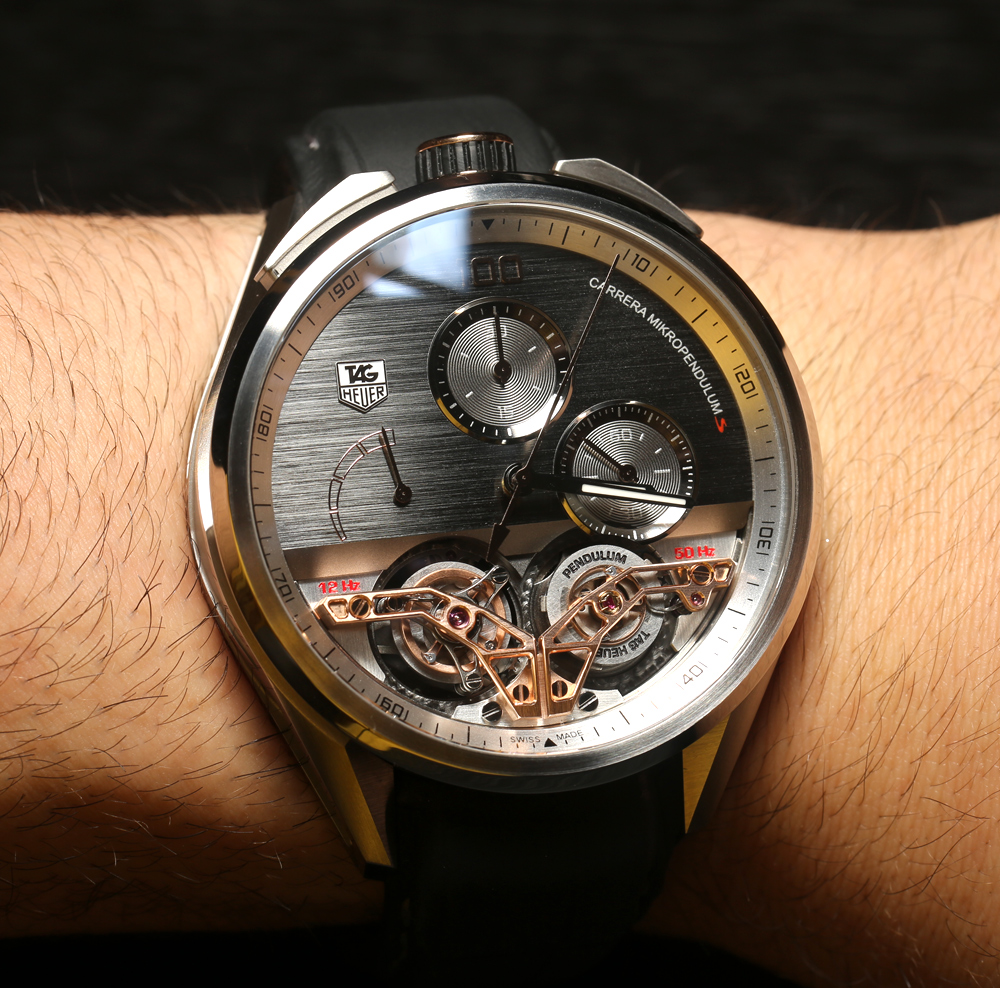 Based on the MikroTourbillonS, the MikroPendulumS has essentially the same main features. Two independent power-chains are contained within the movement, a timekeeping chain and a chronograph chain. The timekeeping chain (automatic) has a tourbillon beating at 4Hz (28,800 bph), and rotating once every 60 seconds, while the chronograph chain’s tourbillon (hand-wound) beats at 50Hz (360,000 bph), rotating when started, at a blistering 12 times per minute. Such speed however, gives only a 60 minute power reserve, but that is a limitation that can be forgiven.

See more here for technical details from our previous article on the MikroTourbillonS. 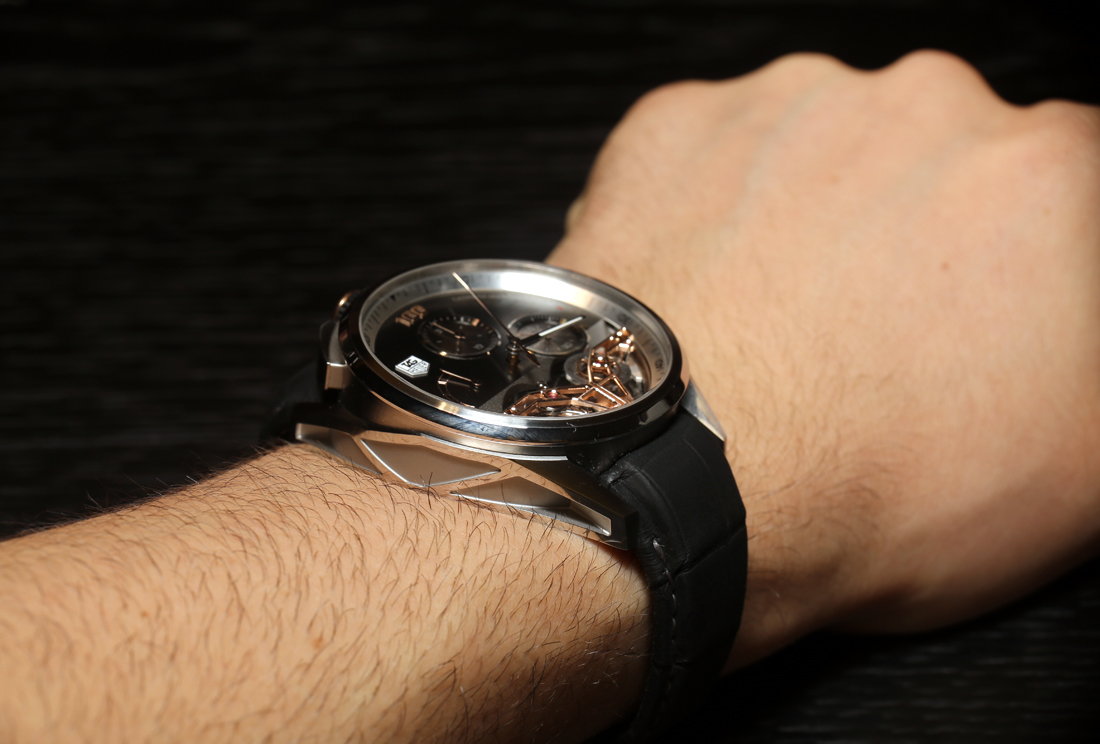 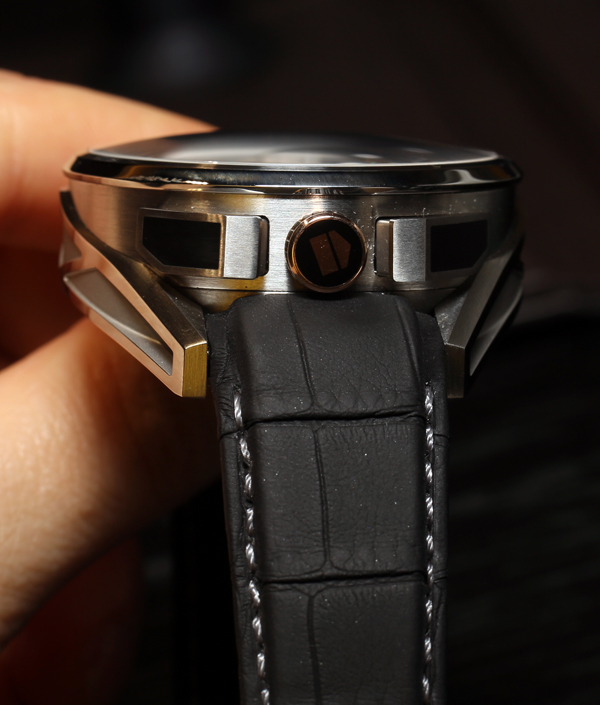 The main differences however, of the MikroPendulumS to the MikroTourbillonS (aside from the magnetic pendulum) lie in the case and overall design. The MikroPendulmS has its chronograph pushers moved to the top of the chrome and cobalt alloy case, bullhead style, in the same type of case we first saw on the Mikrogirder. At 45mm wide, I’m glad that this case was chosen, as it has become something of an icon for TAG Heuer, recalling the shape of old stopwatches. 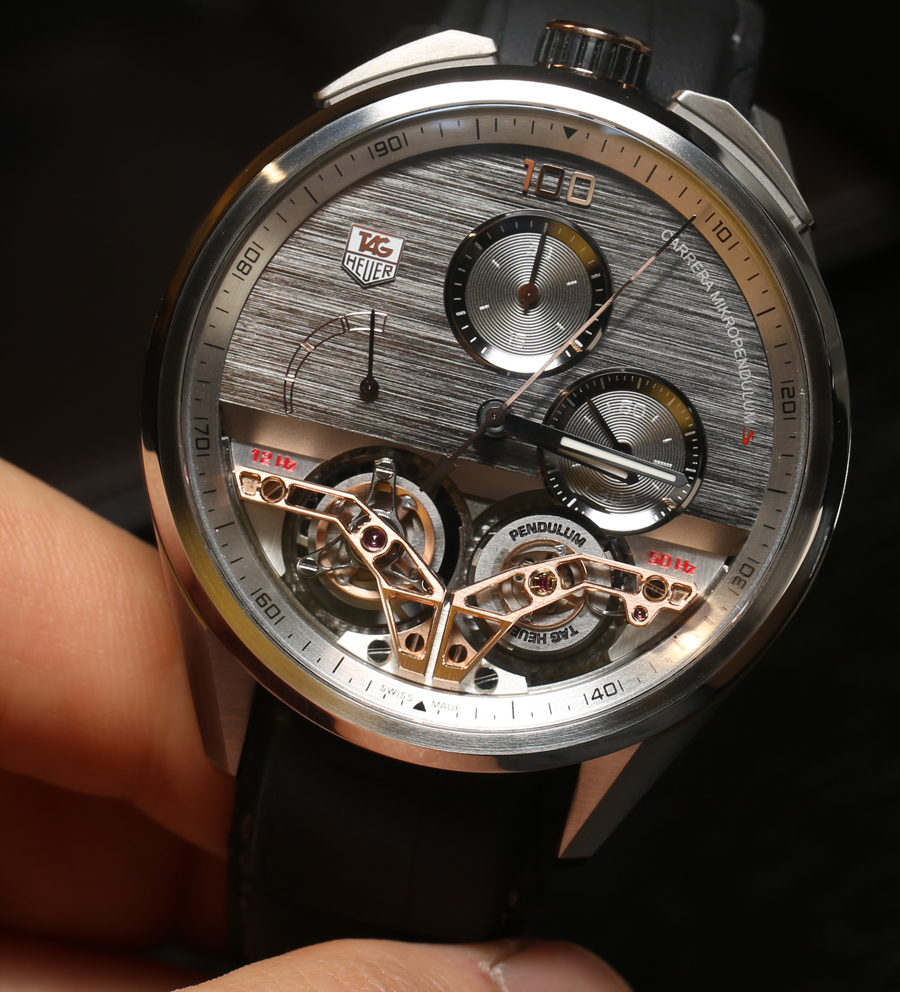 This watch is a nice evolution of all the concepts that TAG Heuer has been presenting us with. The twenty-five-person team of scientists, engineers and designers of TAG Heuer’s Avant-Garde Haute Horlogerie workshop have certainly assembled a stunning portfolio of achievement in watch-making that has resulted in the thoroughly drool and lust-worthy MikroPendulumS of today.

However, this is only a concept watch at this stage and is not currently offered for sale. Well, that isn’t totally true. TAG Heuer will produce a handful of these for high-end collectors who are “friends of the brand.” They will not be reasonably priced for sure. A more accessible option is the MikroPendulum, (without the “S”), a production watch presented at the same time as the MikroPendulumS. This one is for sale, but we’ll cover that piece in a separate article with full details. tagheuer.com