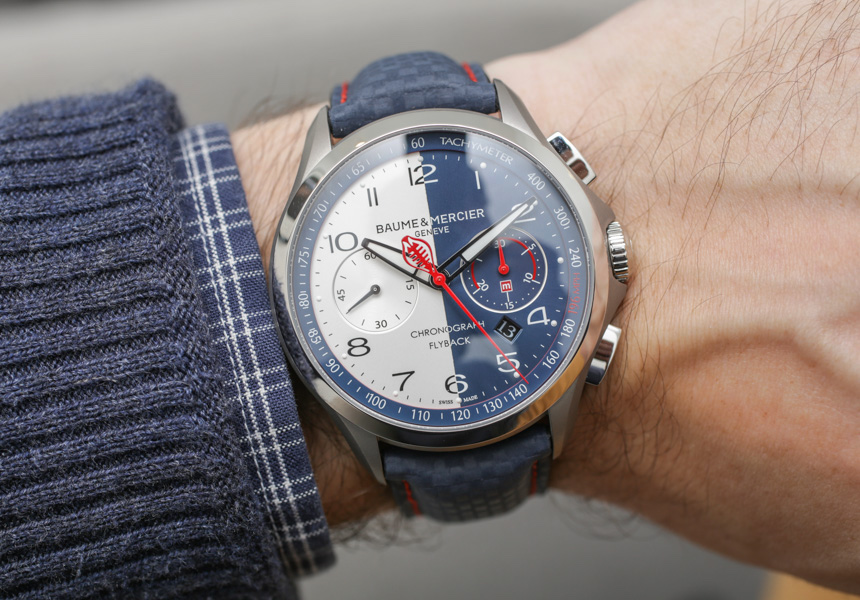 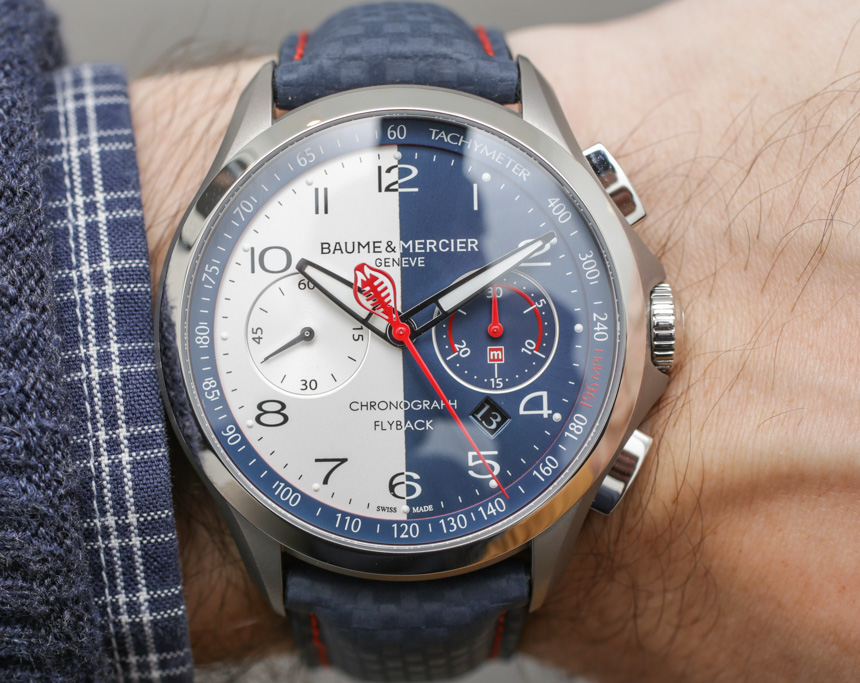 The best conversation I had at SIHH 2017 was with American car legend Peter Brock. Noted as the designer of the Shelby Cobra Daytona Coupe, Peter Brock worked with the great (and sadly, late) Carroll Shelby and the Shelby Cobra race car collection. In the early 1960s, the Shelby Cobra Daytona Coupe CSX2299 debuted on the race circuit to not only beat out the Europeans who had larger, better-funded race teams – but also went on to set something like two dozen land speed records. For 2017, Baume & Mercier continues their relationship with Shelby and releases a new collection of Shelby-themed watches with the highlight being the Baume & Mercier Clifton Club Shelby Cobra – these consist of three limited-edition models which are the reference M0A10344, M0A10343, and M0A10342. 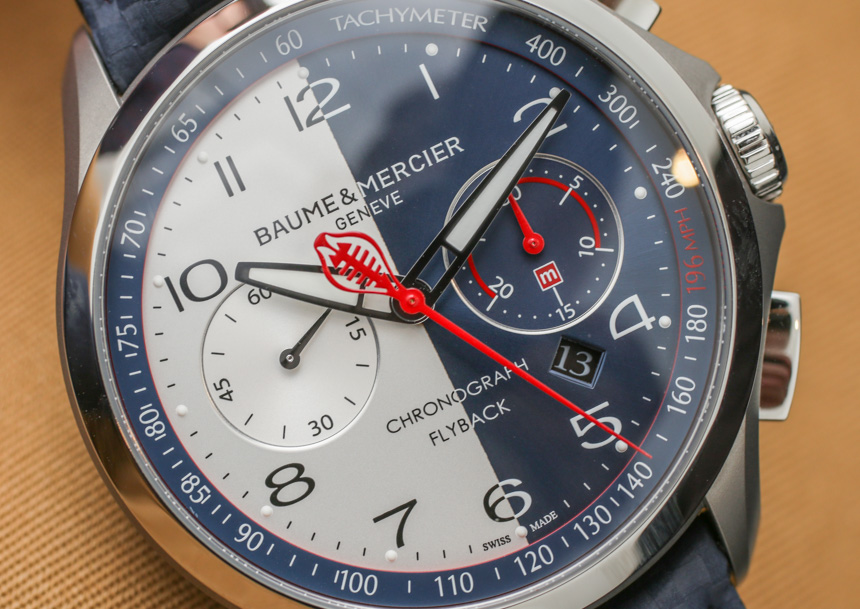 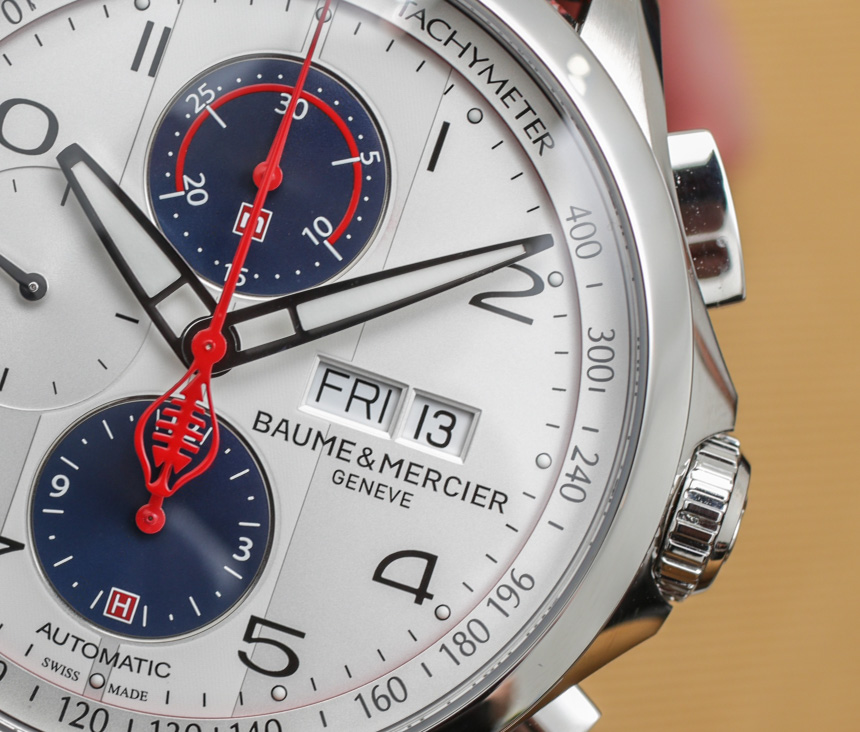 Peter Brock was a veritable well of incredibly fascinating stories and history about car racing. I am not exaggerating that I could easily spend the entire day sitting in that back room of the Baume & Mercier booth listening to him share information. I’m no car racing historian so I won’t attempt to retell Brock’s stories myself, but you can read more about Pete Brock on Wikipedia here. In my hand while we chatted was Baume & Mercier’s latest Shelby watch for 2017, which is more than just a cosmetic update of the outgoing models. 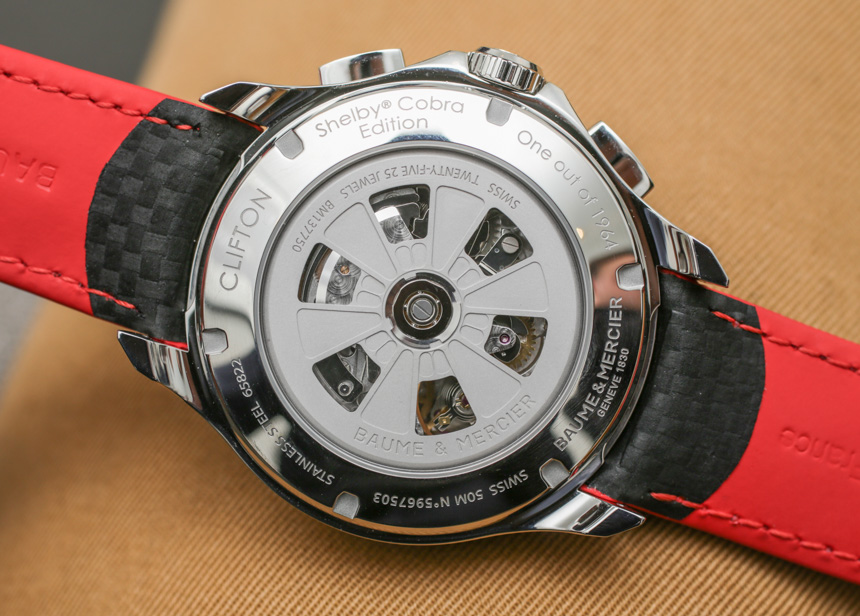 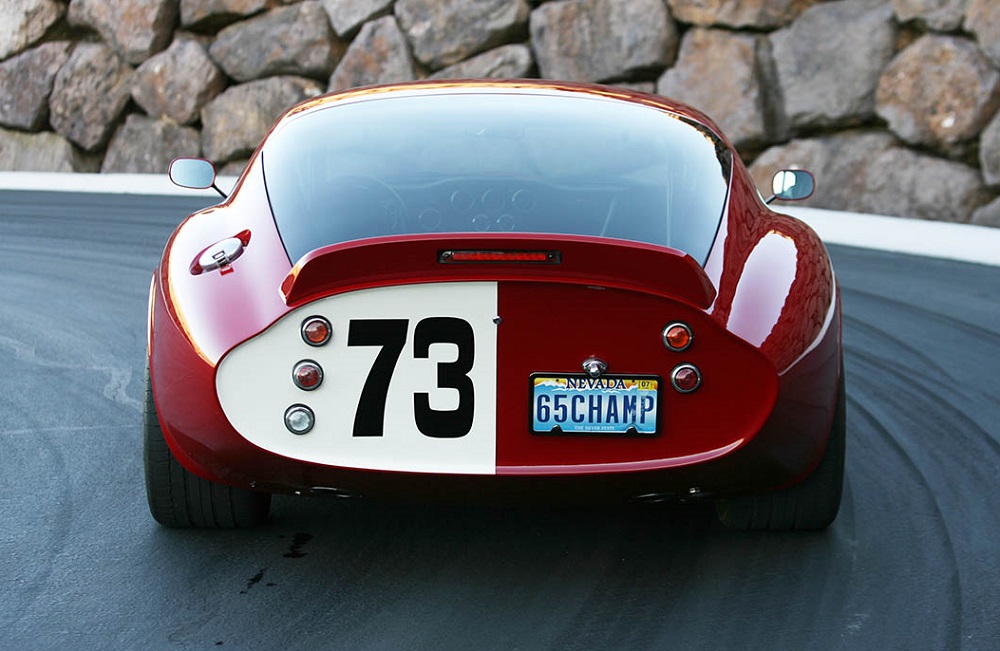 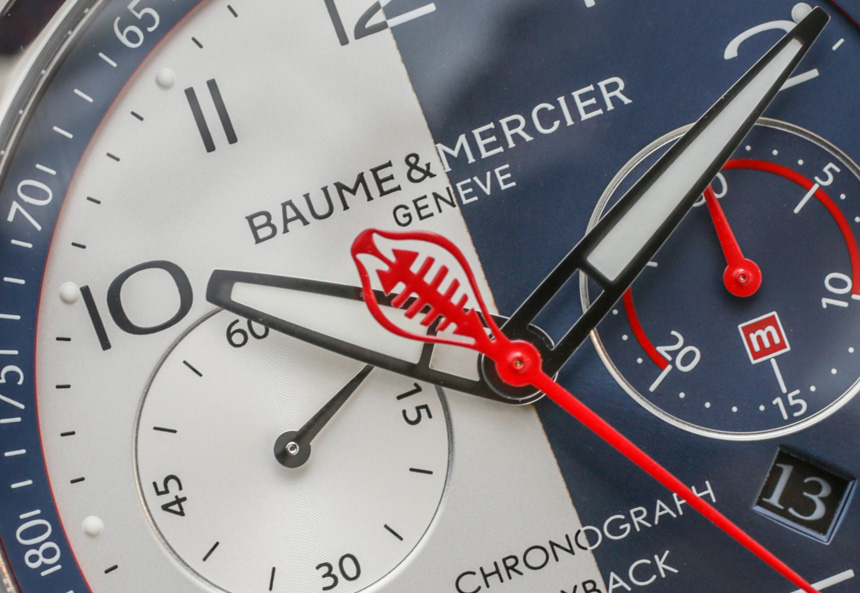 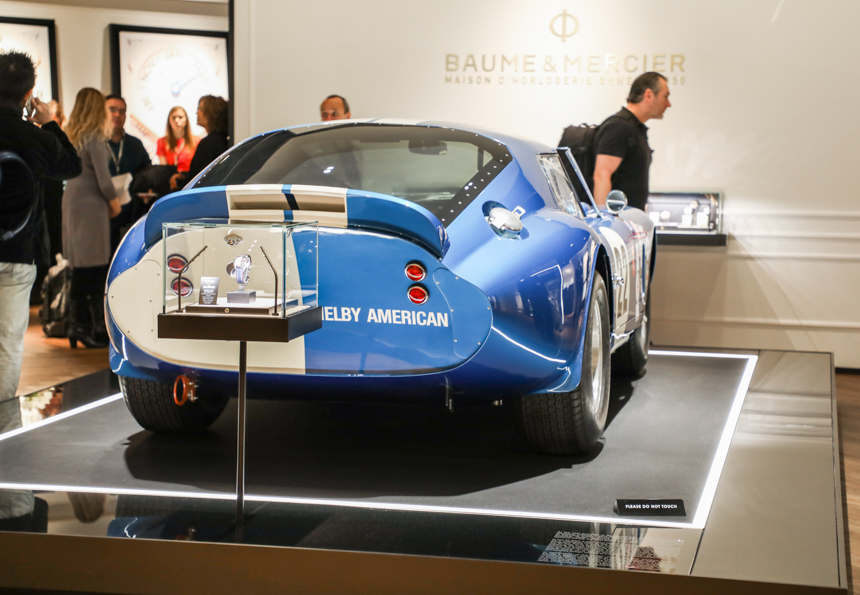 Perhaps the most interesting part of the Daytona’s story that Mr. Brock told me is just why it is was so fast. The secret was in the design of the rear, which dropped off abruptly without a tapering end. Brock apparently discovered pre-World War II German engineering documents discussing how such designs performed better than the traditional fishtail style ends that many cars at the time had. This was prior to widespread use of wind tunnels or deep understanding of aerodynamics. It was in his discovery of the documents as well as his insistence of implementing the concepts he learned into the design of the Daytona Coupe car which is the real fascinating part of the story, in my opinion. 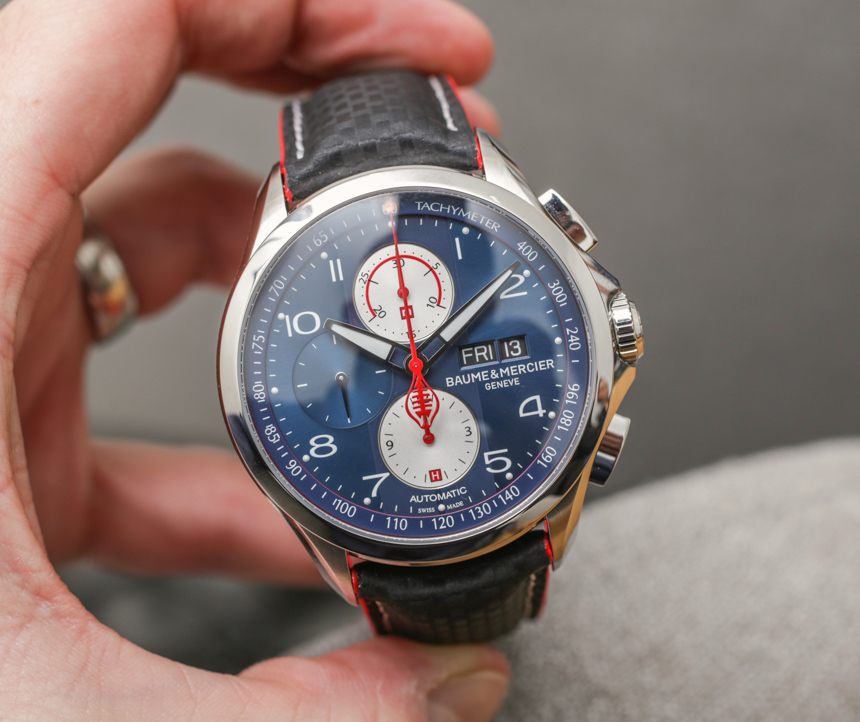 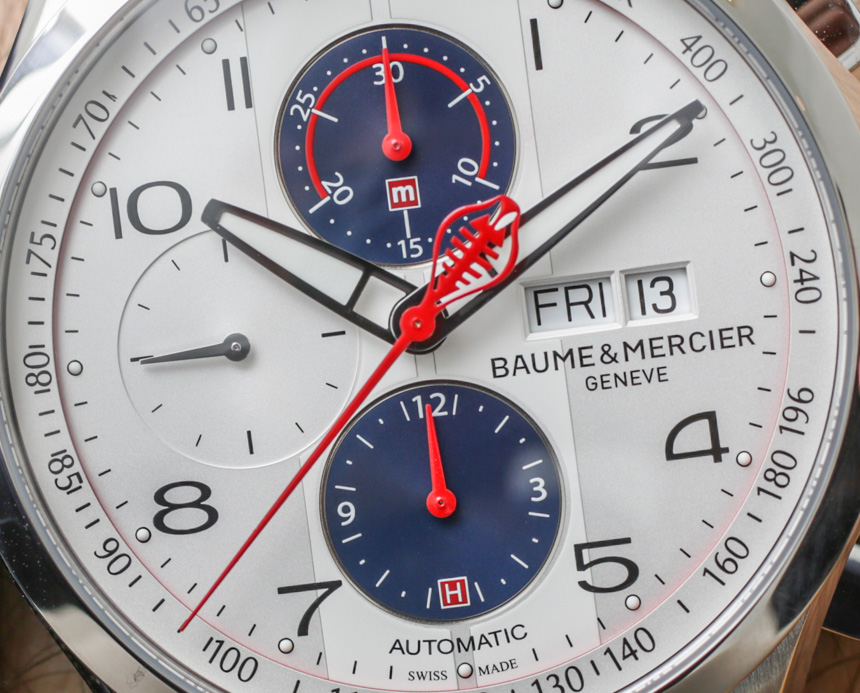 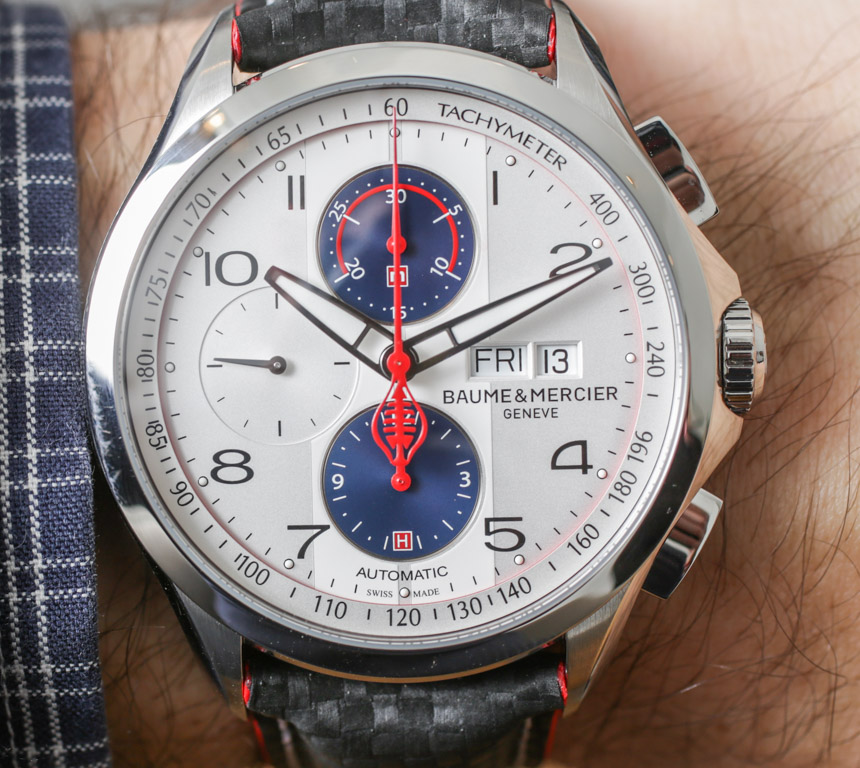 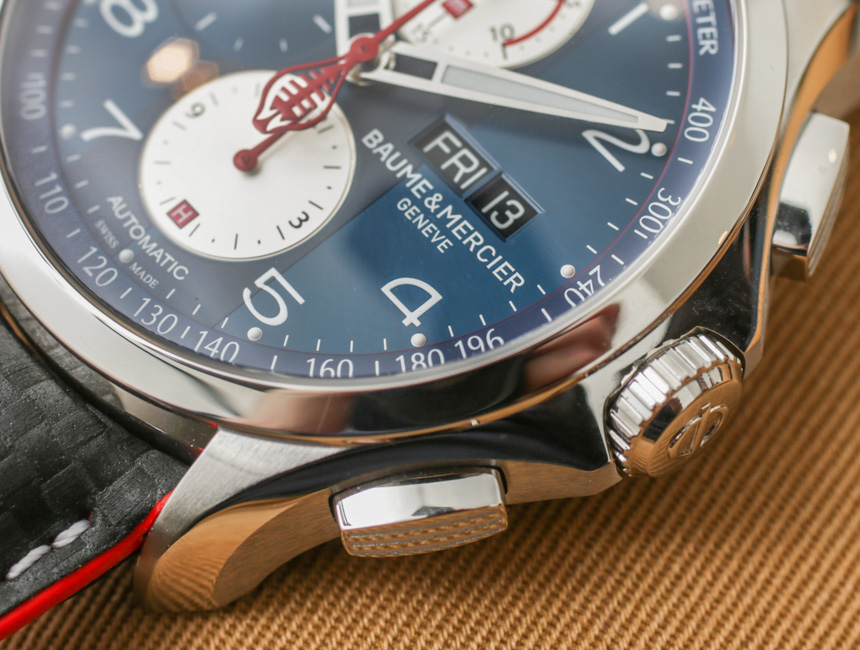 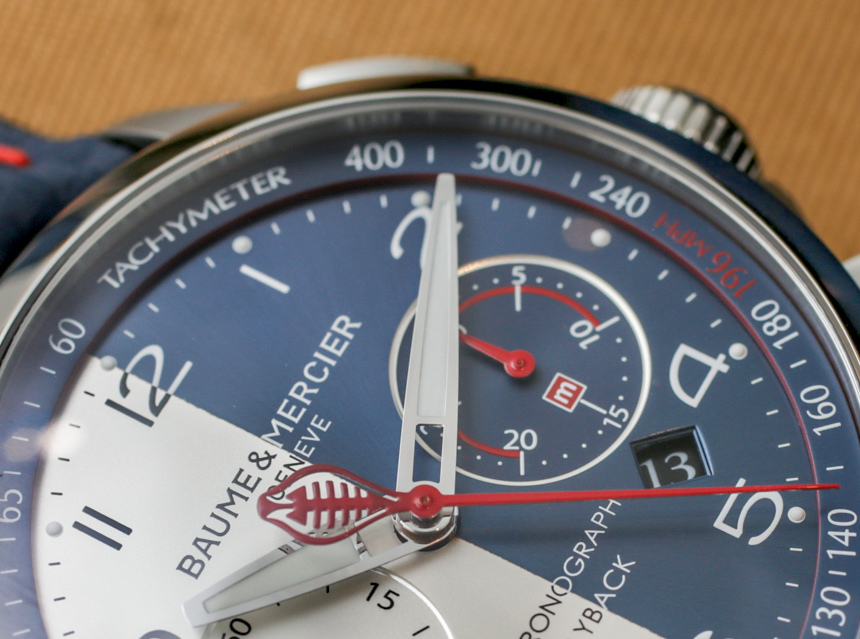 Pete Brock and Baume & Mercier designer Alexandre Peraldi reportedly worked together on the clever lines of this more modern-feeling driving-style watch in comparison to the slightly more retro-feeling Capeland models. Both are certainly inspired and good looking, but it is important to make it clear that the watches’ cases are totally distinct. 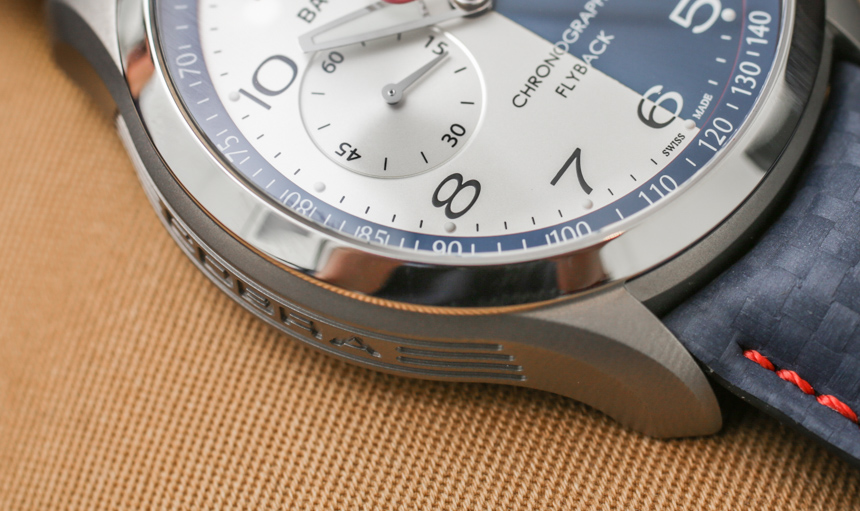 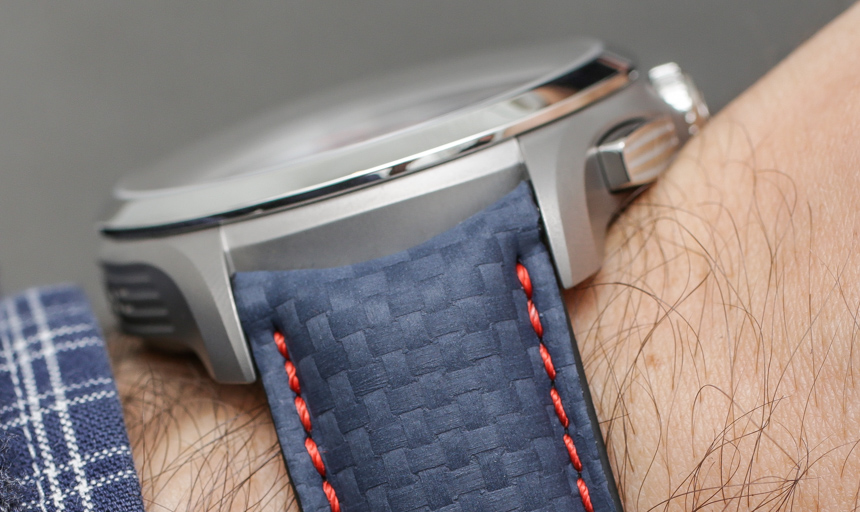 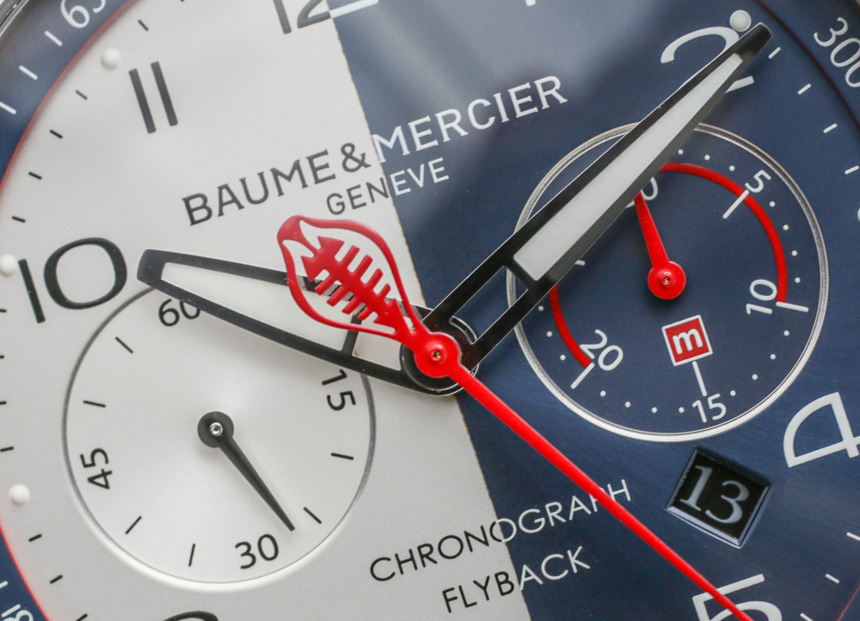 The Baume & Mercier Clifton Club Shelby Cobra is 44mm wide and 15.3mm thick in either steel and titanium or in all steel. The less limited model has just a steel case. The case design and quality are fantastic, but it ain’t cheap, especially for the 10344 version. The darker elements of the Baume & Mercier Clifton Club Shelby Cobra 10344’s case are titanium, which is rendered in a sandblasted finishing with side detailing meant to evoke the engine as well as the foot pedals. The polished pushers and bezel are in steel. The overall case is elegant and refined even with its overt style cues meant to suggest the famed Shelby Cobra Daytona Coupe. That wasn’t easy, and it’s a testament to the design acumen of Mr. Peraldi. I say this because so many times when watches try to overtly suggest a car or other machine, the results can look really kitschy. 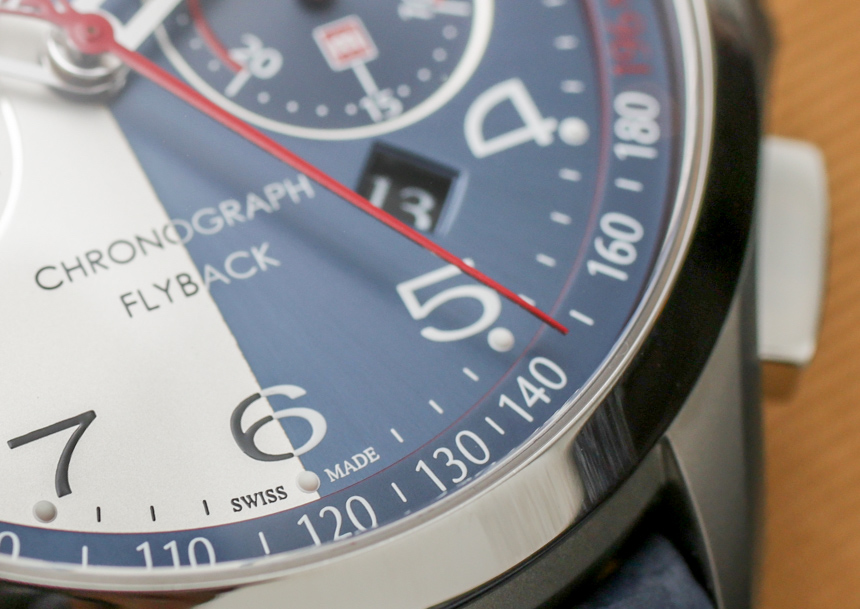 At the Baume & Mercier booth at SIHH 2017, they had a replica of the original Shelby Cobra Daytona Coupe that was built in the 1990s. I was told that it was meant to replicate the original in almost every way, including performance. Only three such cars exist in the world. One thing you’ll notice about the car is the “split” blue and silver/white paint job. This split color is mimicked on the dial of this particular Baume & Mercier Clifton Club Shelby Cobra 10344 limited-edition model. The “two-face” look isn’t for everyone, but I found it cool and felt as though it added a welcome bold character to the watch which matched the personality it was going for as something proud but not aiming to be on everyone’s wrist. For the versions of the Baume & Mercier Clifton Club Shelby Cobra watches in all steel with the more traditional dials, you can choose between a mostly blue or mostly silver/white dial. 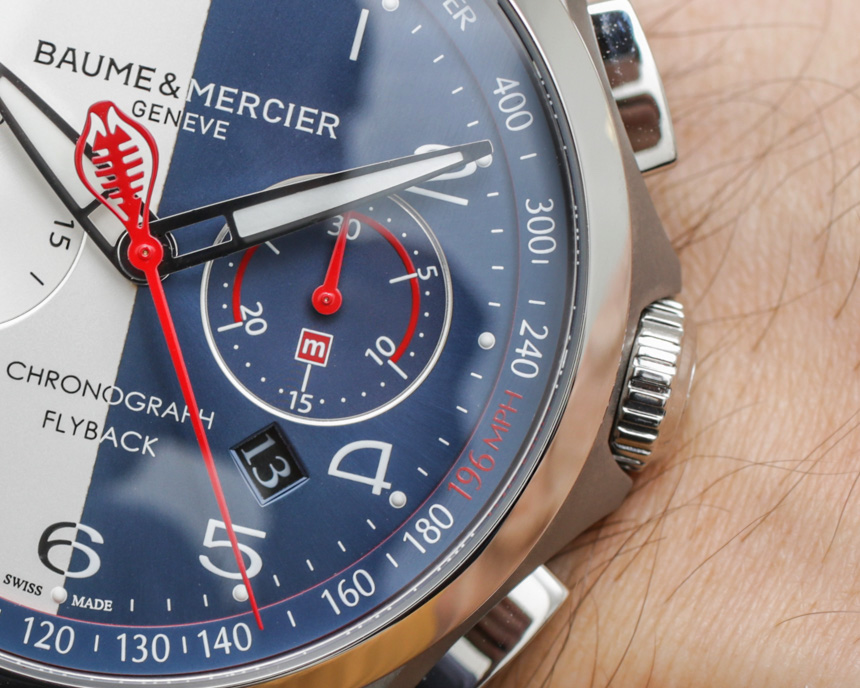 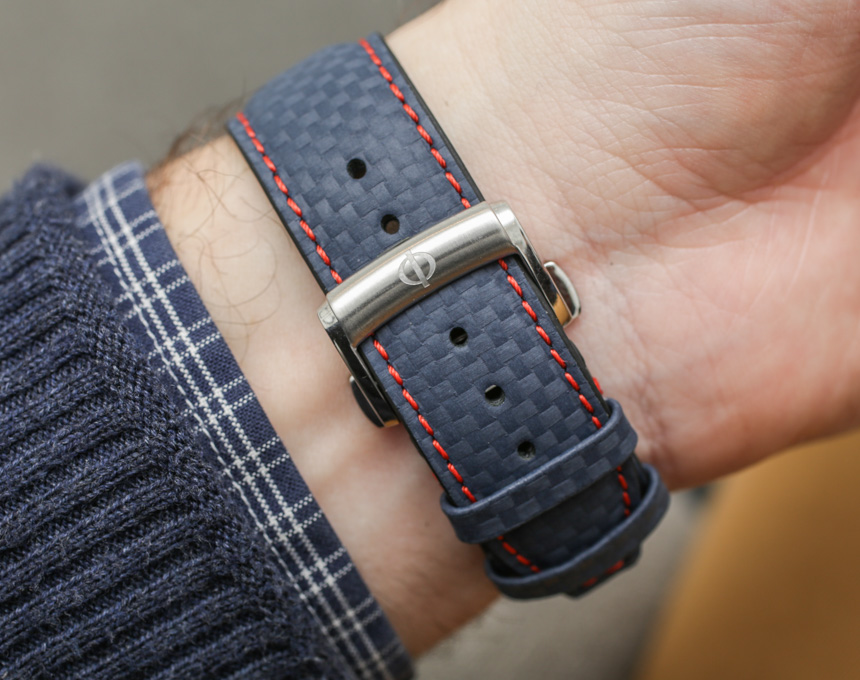 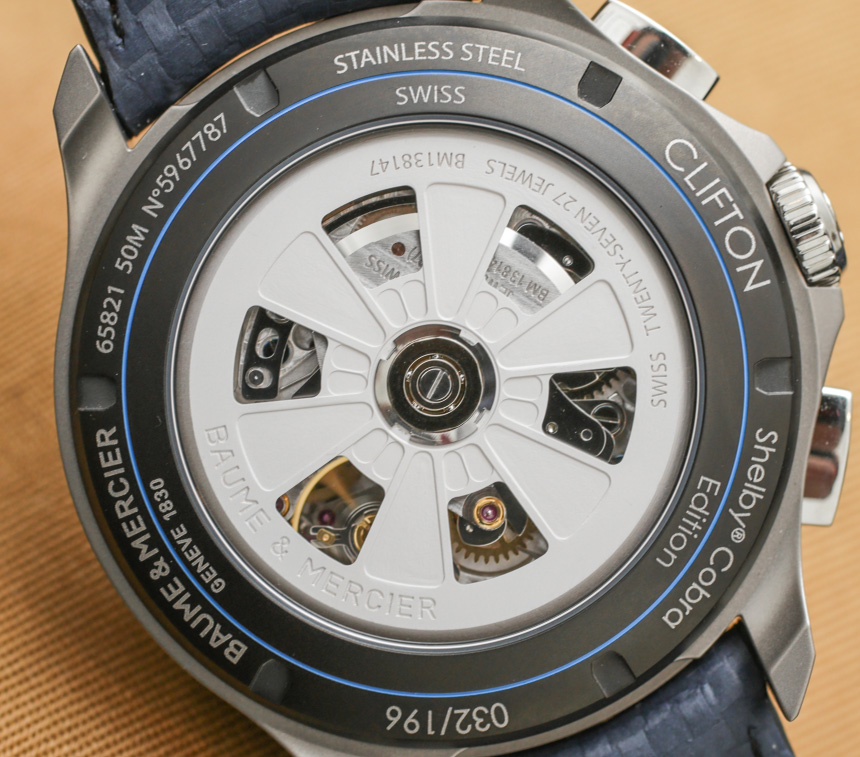 Dial details here include a combination of those from previous Shelby Cobra watches in the larger Clifton collection (such as the style of the Arabic numeral hour markers). A red colored “196 mph” in the tachymeter scale is meant to recall a speed record of the Daytona Coupe race car. Over on the rear of the case, there is a sapphire crystal exhibition caseback window. You can see the thick automatic rotor which doesn’t allow for too much of a view into the movement but is meant to suggest an element of the car – this time, the wheels. 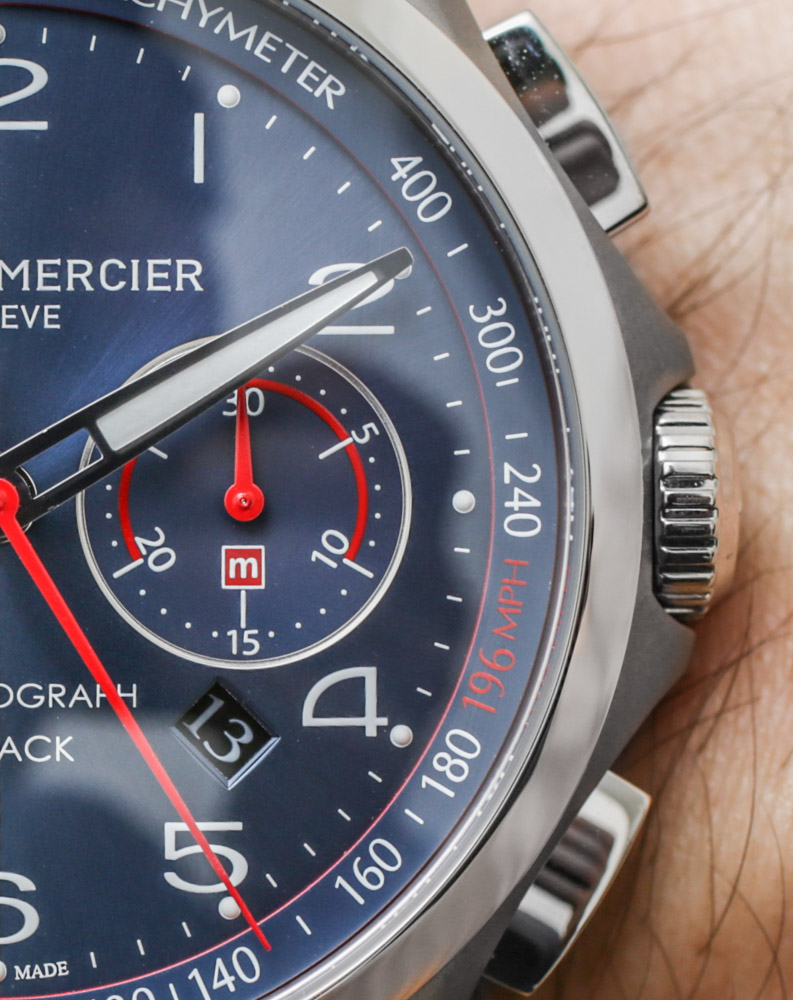 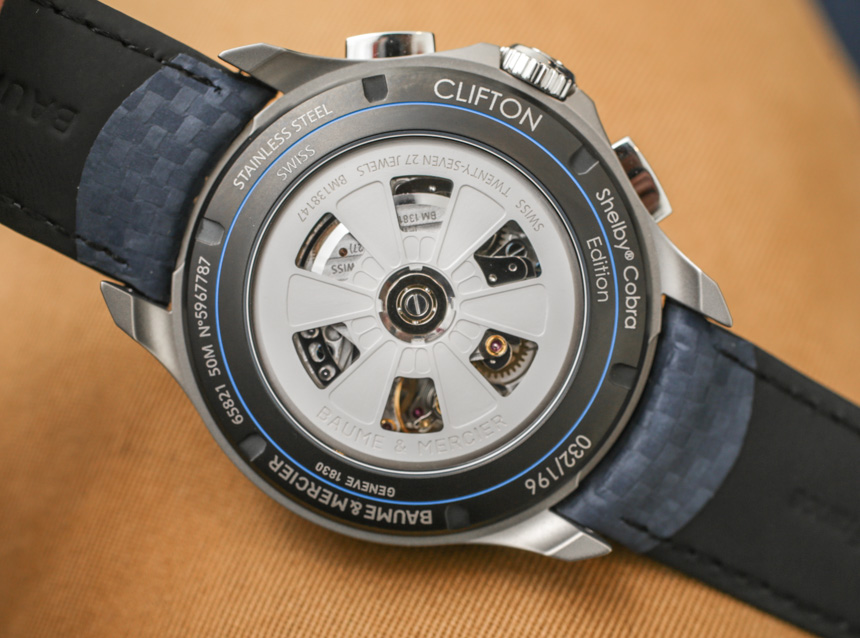 Inside the Baume & Mercier Clifton Club Shelby Cobra 10344 is the Swiss La Joux-Perret caliber 8147-2 automatic flyback chronograph movement. Operating at 4Hz, the movement has a power reserve of 42 hours. The movement offers the time and 30-minute chronograph along with a date indicator window. Not all collectors will appreciate the presence of the date window (located diagonally between 4 and 5 o’clock), but it doesn’t bother me. Though I would have liked for it to employ a matching blue-colored disc to match that section of the metallic blue dial color. The less limited Baume & Mercier Shelby Cobra 10343 and 10342 models in the all-steel cases contain base Swiss ETA Valjoux 7750 automatic chronograph movements and similar “wheel-style” automatic rotors. The cases on all models are water resistant to 50 meters. 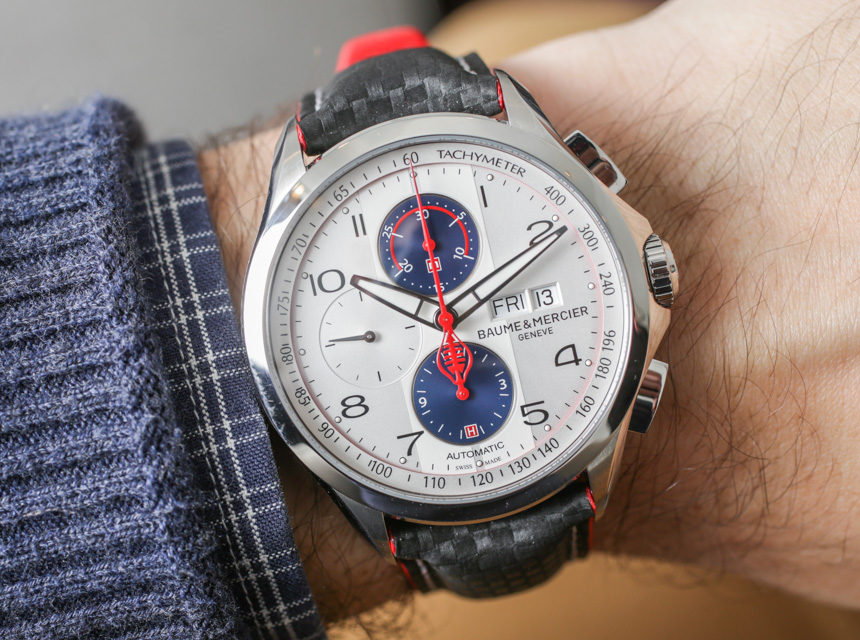 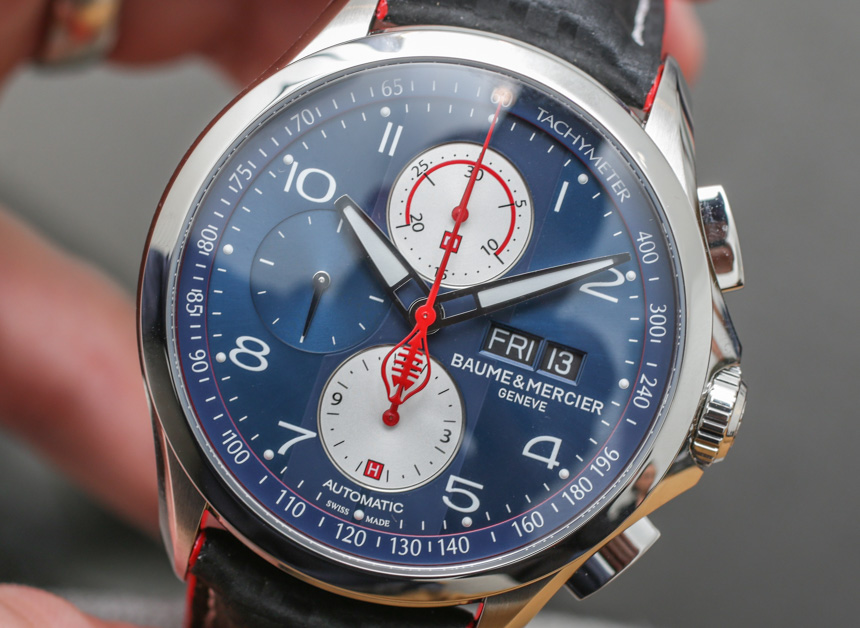 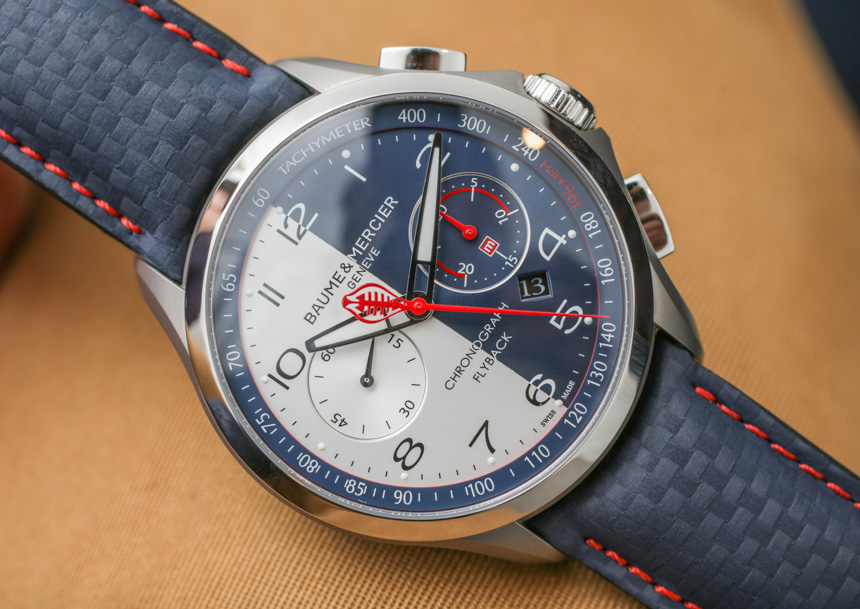 Without knowing the backstory of Peter Brock and the Shelby Cobra Daytona Coupe car, the Clifton Club Shelby Cobra 10344 watch is still nice, but it would be a shame to own this timepiece without knowing the larger tale of why it exists. It will also be relatively limited, with this reference 10344 steel and titanium version being produced as just 196 pieces. The other Baume & Mercier Clifton Club Shelby Cobra 10343 and 10342 watches with the 7750 movements are each limited to 1,964 pieces. Each piece comes on a carbon fiber-style embossed calfskin strap, and with a small 1:43 scale model of the Shelby Cobra Daytona Coupe car. Price for the reference M0A10344 Clifton Club Shelby Cobra is $7,950 USD while the M0A10343 and M0A10342 watches are priced at $4,450. Availability is to set in April of 2017, but according to the brand, all the 196 limited-edition pieces are already spoken for by retailers. baume-et-mercier.com