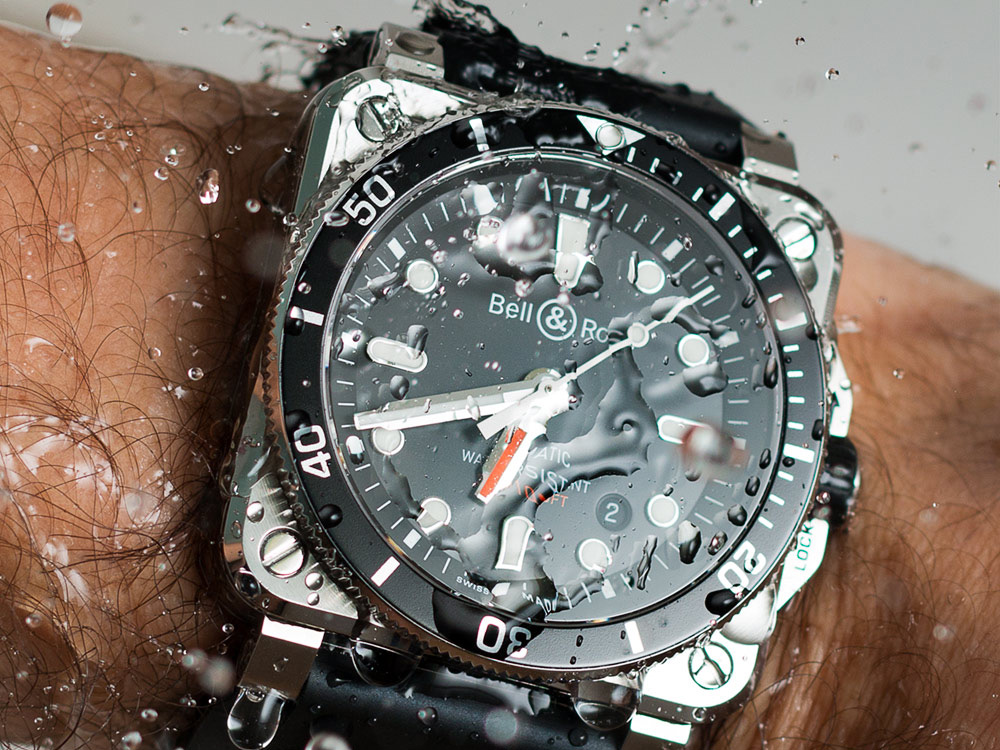 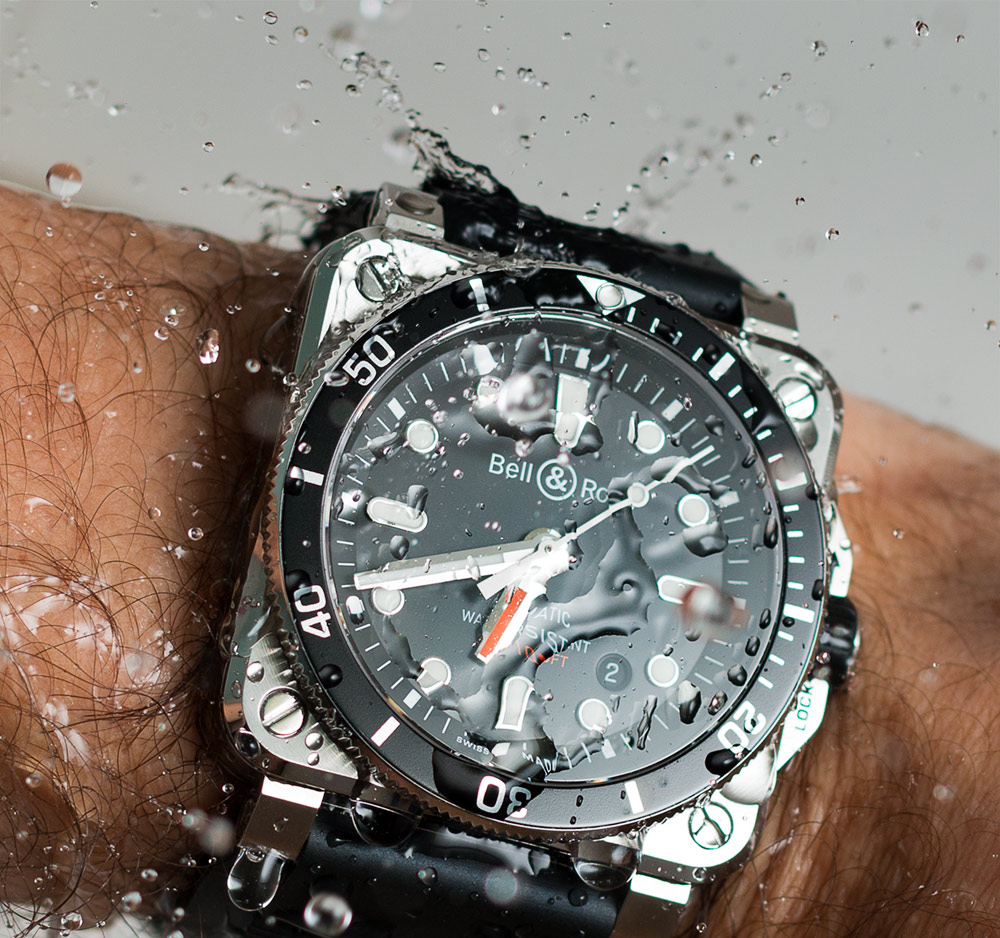 Introduced in 2017, the Bell & Ross BR 03-92 Diver is not the brand’s first dive watch, but it is the first dive watch in their iconic square case. It is, in my opinion, a great success in balancing various design elements and themes as well as boldness and wearability. “Balance” is a word that I kept returning to when considering different aspects of the Bell & Ross BR 03-92 Diver. The result is a solid, refined dive watch with a look and character quite unlike any other I know of, and it is just plain fun to wear. 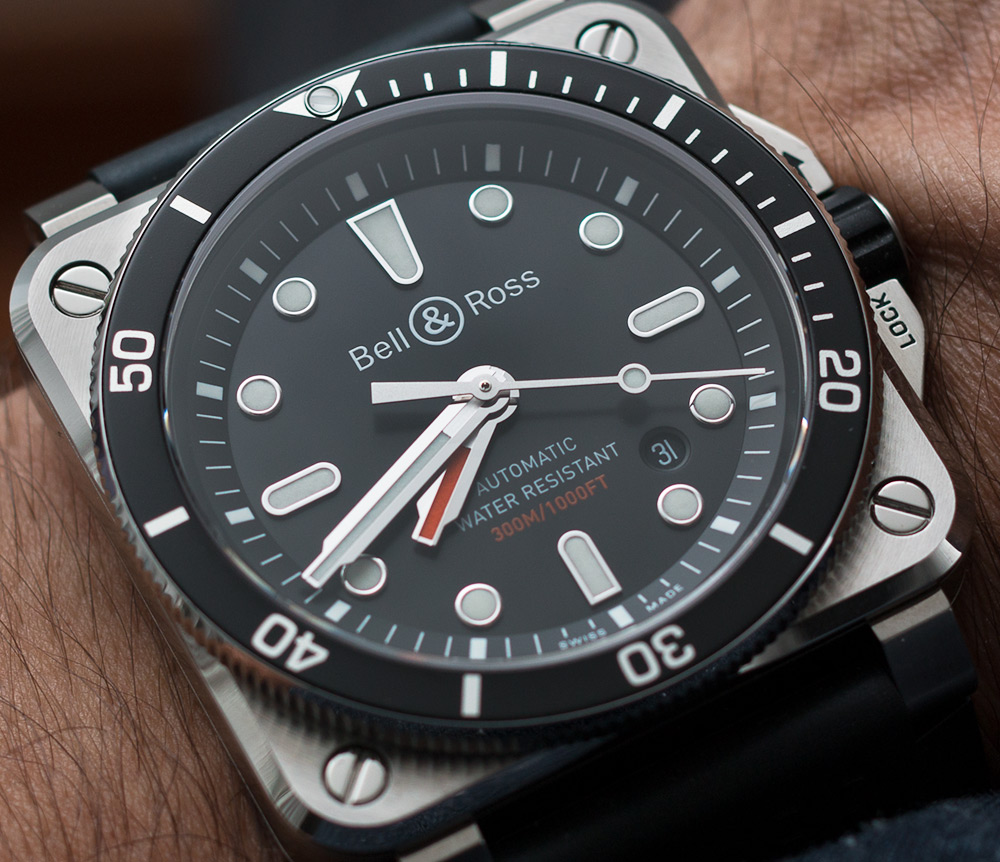 No matter how good, satisfying, or original a brand’s watches are, a genuinely “iconic” model is something most watch brands will never be able to convincingly claim – by its very nature the term can be accurately applicable to only a limited number of watches. I try to avoid even using the word, but I think many watch enthusiasts will agree that Bell & Ross’ square-cased, aviation-themed watches based on the dashboard instruments of old airplanes will qualify. The design is strongly associated with and rooted in aviation, but Bell & Ross has branched out to plenty of other genres or styles with the square case as the foundation. While the Bell & Ross BR 03-92 Diver could get lost among so many other variations on the theme, taken alone it is successful as a compelling dive watch. 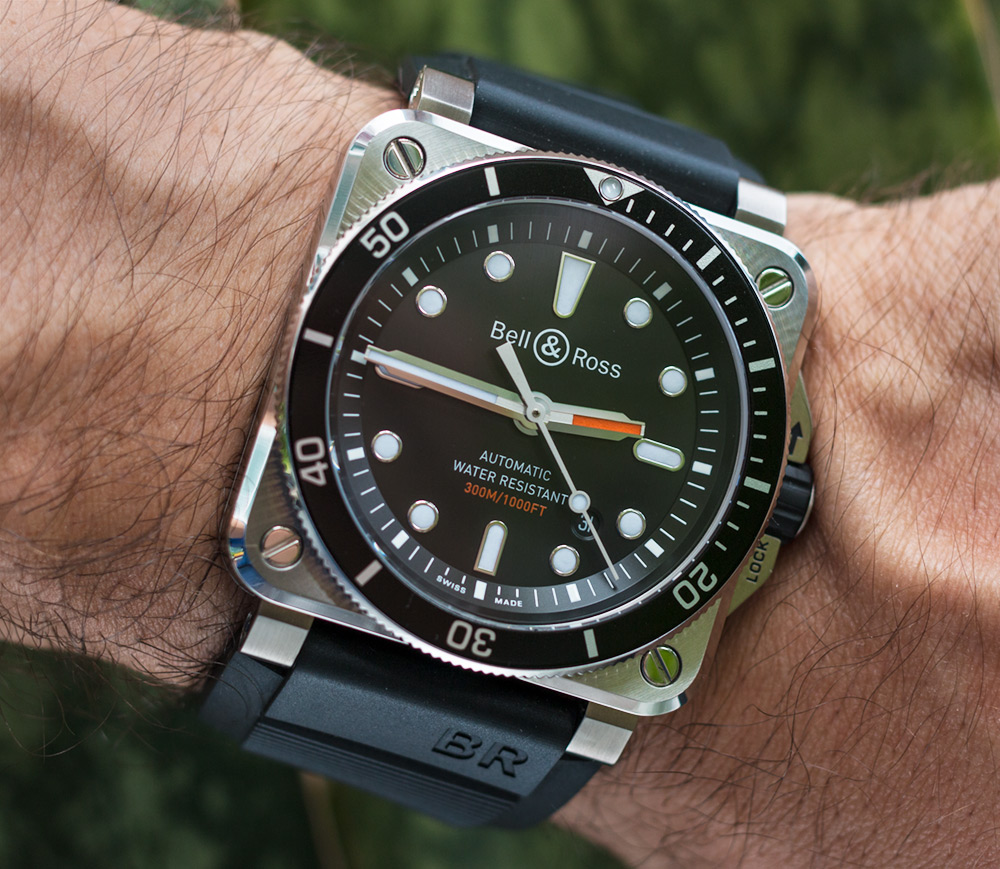 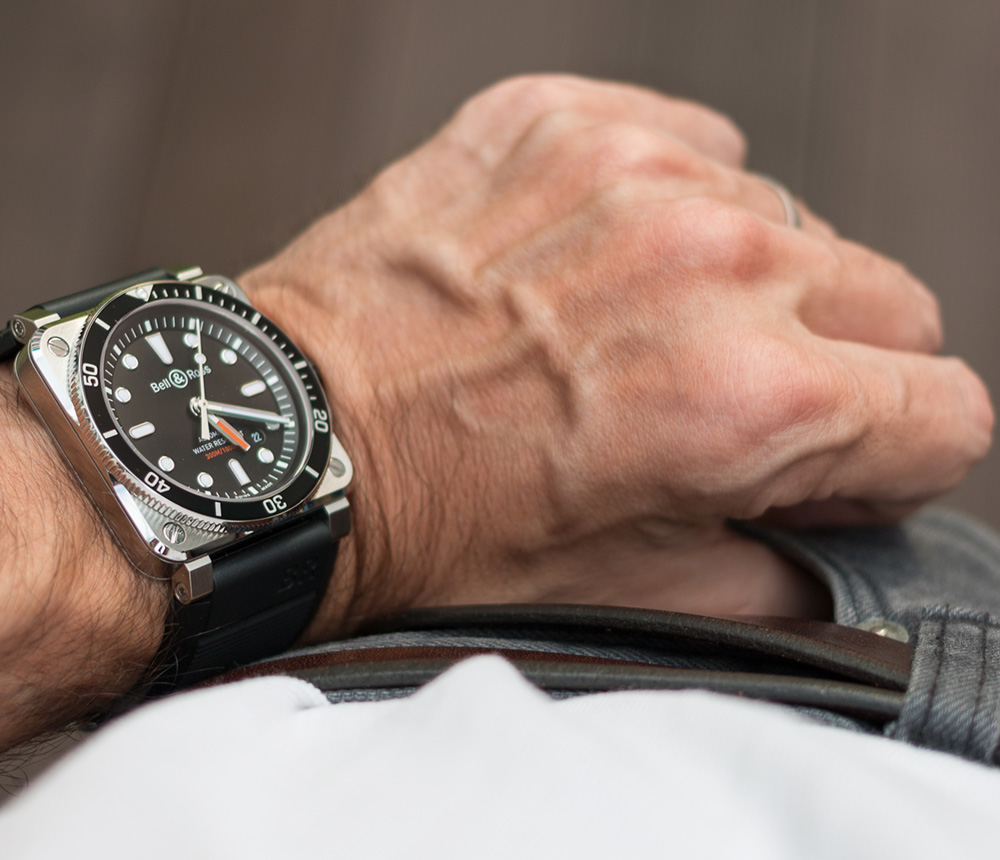 There are several Bell & Ross collections that use essentially the same basic case design but in different sizes (and each with different models). The BR 01 is a wrist-eclipsing (for me, anyway) 47mm, the BR 03 like the one reviewed here is 42mm, and the BR S is 39mm. The BR X watches are Bell & Ross’ “Experimental” collection that also use some variation of the square case but with generally more elaborate constructions, avant-garde designs, and haute complications (hands-on example here with the Bell & Ross BR X2 Tourbillon Micro-Rotor). There are divers in other collections – and there have been more in the past, such as the BR 02 – but, again, the Bell & Ross BR 03-92 Diver is the first diver in the square case. 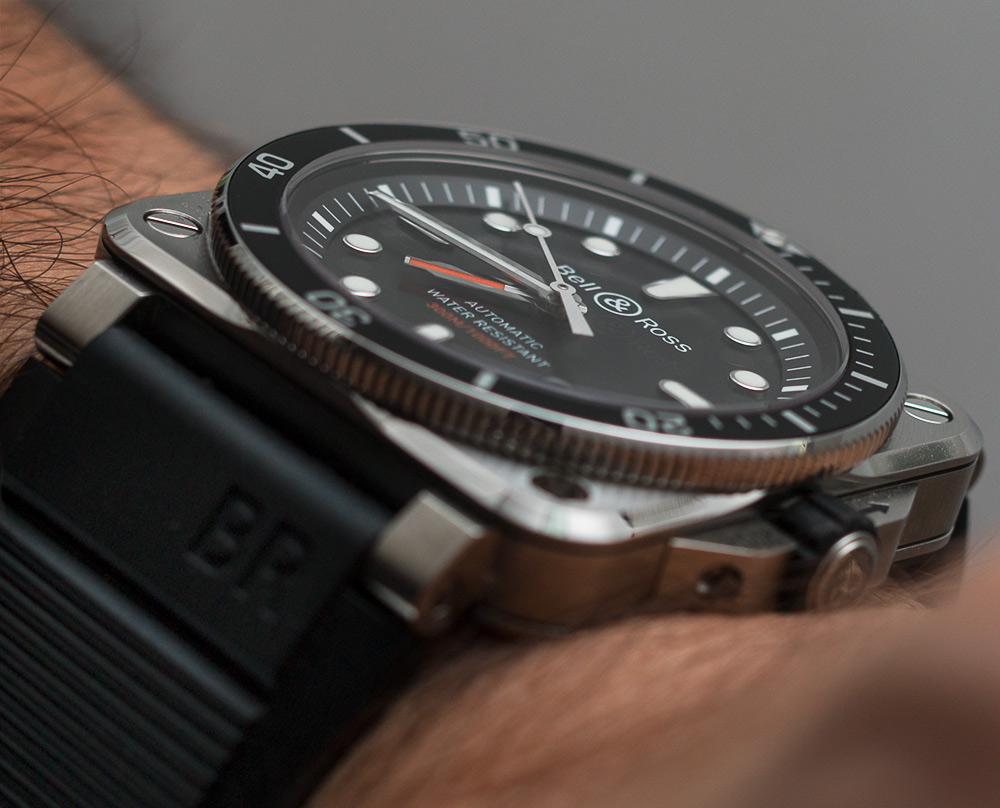 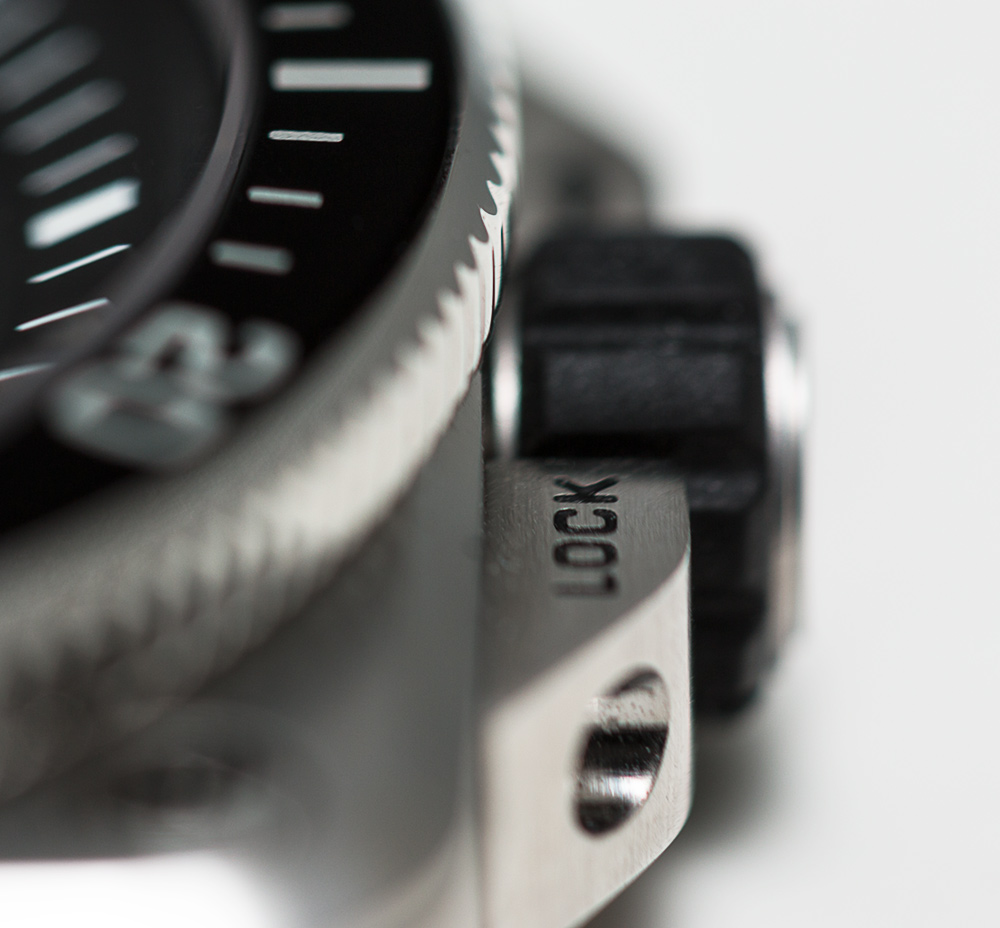 You will have to be the final judge as to whether Bell & Ross got it right with the BR 03-92 Diver – and I recommend you try it on first – but my judgement after wearing it almost daily for a couple weeks is that they did. The Bell & Ross case is immediately identifiable as such, but the Bell & Ross BR 03-92 Diver is also just a serious-looking dive watch. It further manages to play the part of a bold-wearing luxury sport watch with an aggressive presence – and at the same time, it looks purposeful and down-to-earth, so the wearer doesn’t look like he’s desperate for attention. Finally, despite that boldness and presence, its size and dimensions somehow keep it surprisingly wearable. At least, these have been my impressions while wearing it. 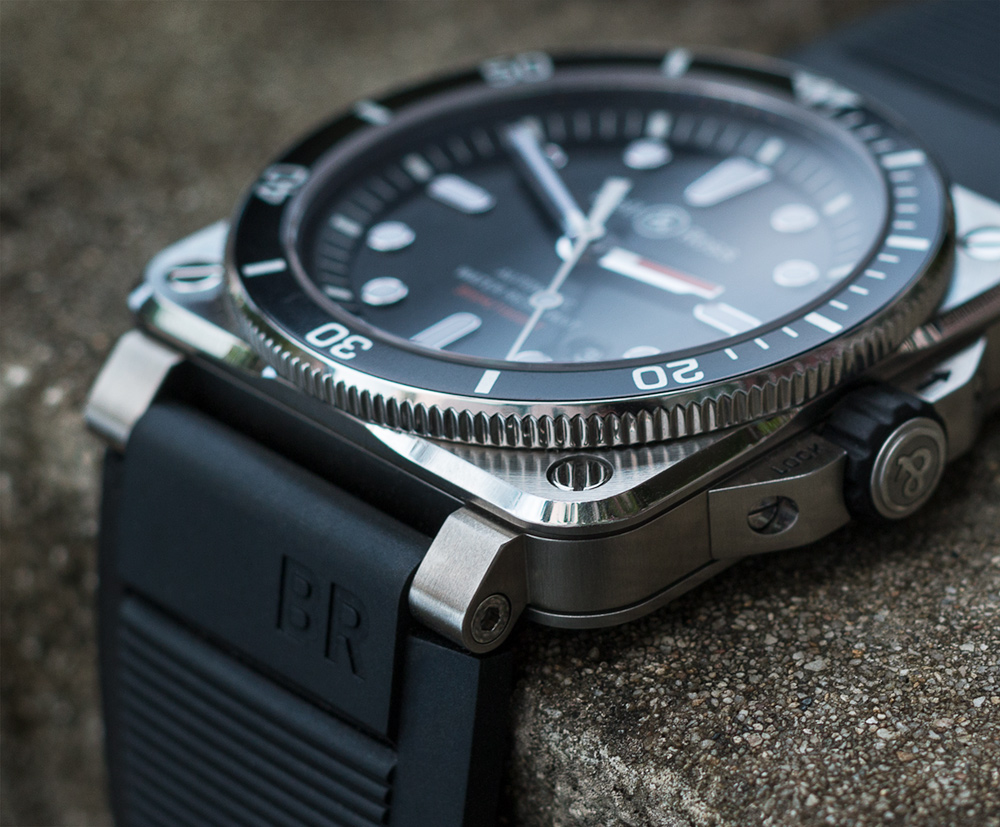 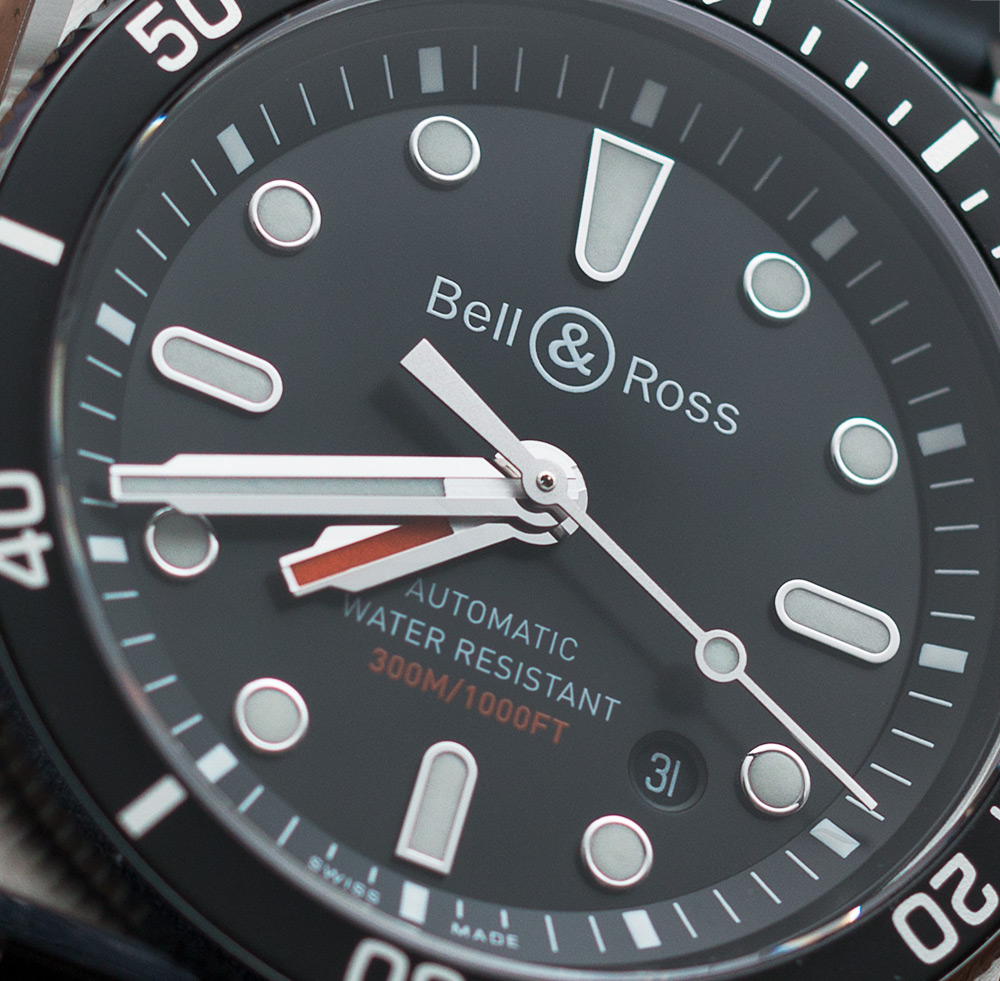 About those dimensions: Looking at the Bell & Ross BR 03-92 Diver on the wrist, one might not guess that it measures only 42mm wide. It might be a weird or abstract thing to say, but I would describe the Bell & Ross BR 03-92 Diver as wearing more like a 44mm-wide watch. Square cases are going to wear larger than their measurements would suggest – if you are familiar with watch measurements and have a habit of guessing how a watch might fit you based on pictures and specs before seeing it in person. Perhaps a corner-to-corner measurement is a good way of evaluating the size of a square watch because that may better represent how much wrist real estate it occupies. I really made an effort to portray in some of the photographs how well it wears on my 6.5″ (17cm) wrist – though I probably couldn’t pull off even a millimeter larger. 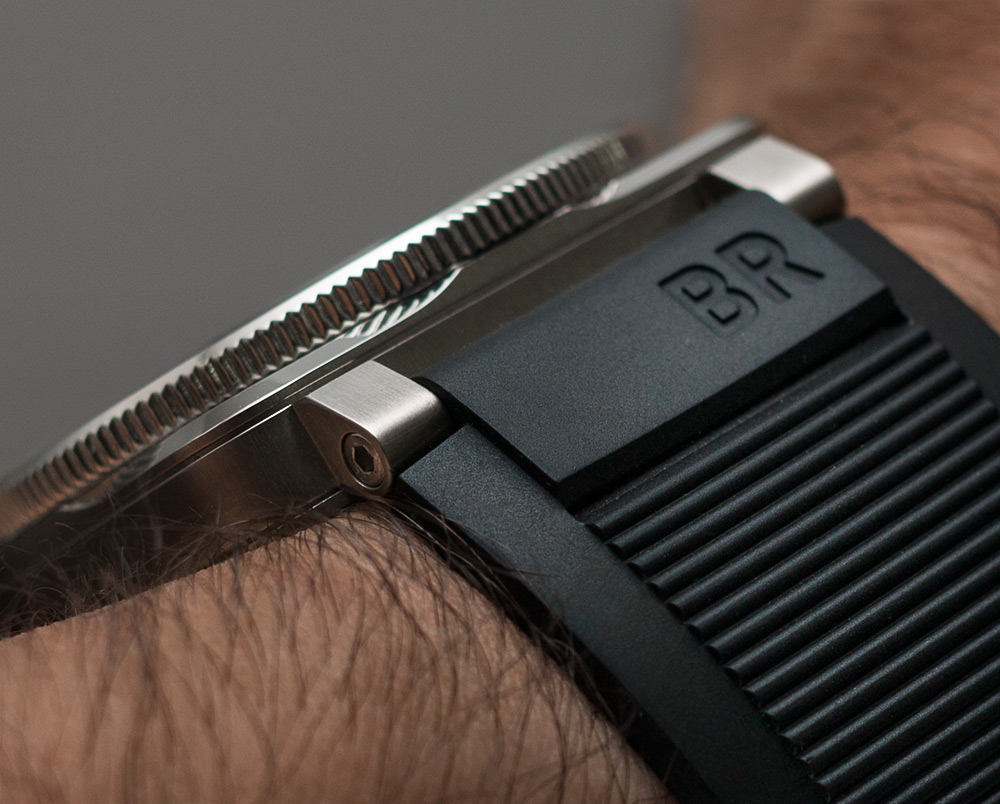 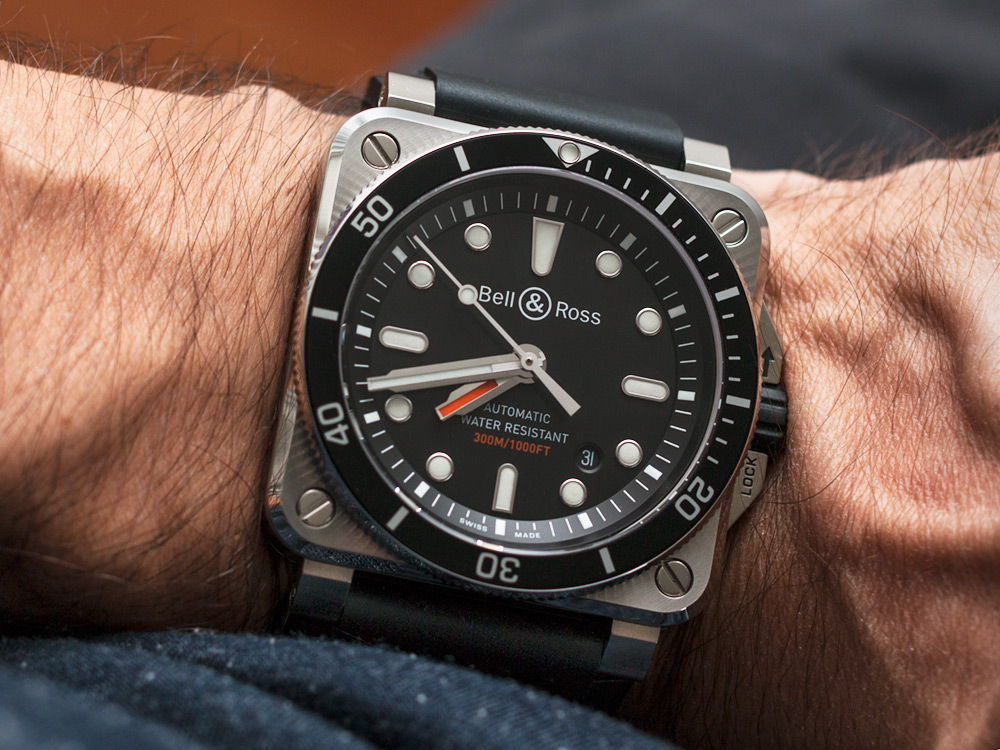 Dive watches tend to be chunky, and water-resistance of 300m is more or less standard nowadays for “professional dive watches” – even though some brands get away with calling a 100m water-resistant watch a diver, and others take it much further to 1000m and more (Bell & Ross’ Hydromax in 1997 was rated to no less than 11,100m). Water-resistance is often understood by consumers as a shorthand for or way of quantifying general durability. The Bell & Ross BR 03-92 Diver is rated to 300m and meets all the other ISO dive watch specifications, and the brand emphasizes how those specifications influenced the design. 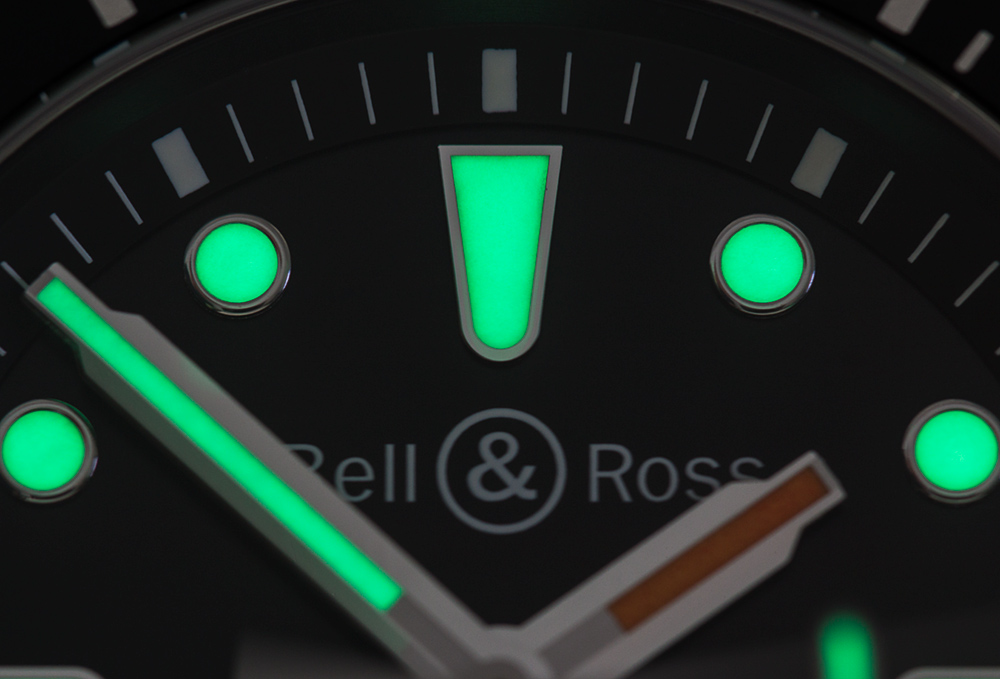 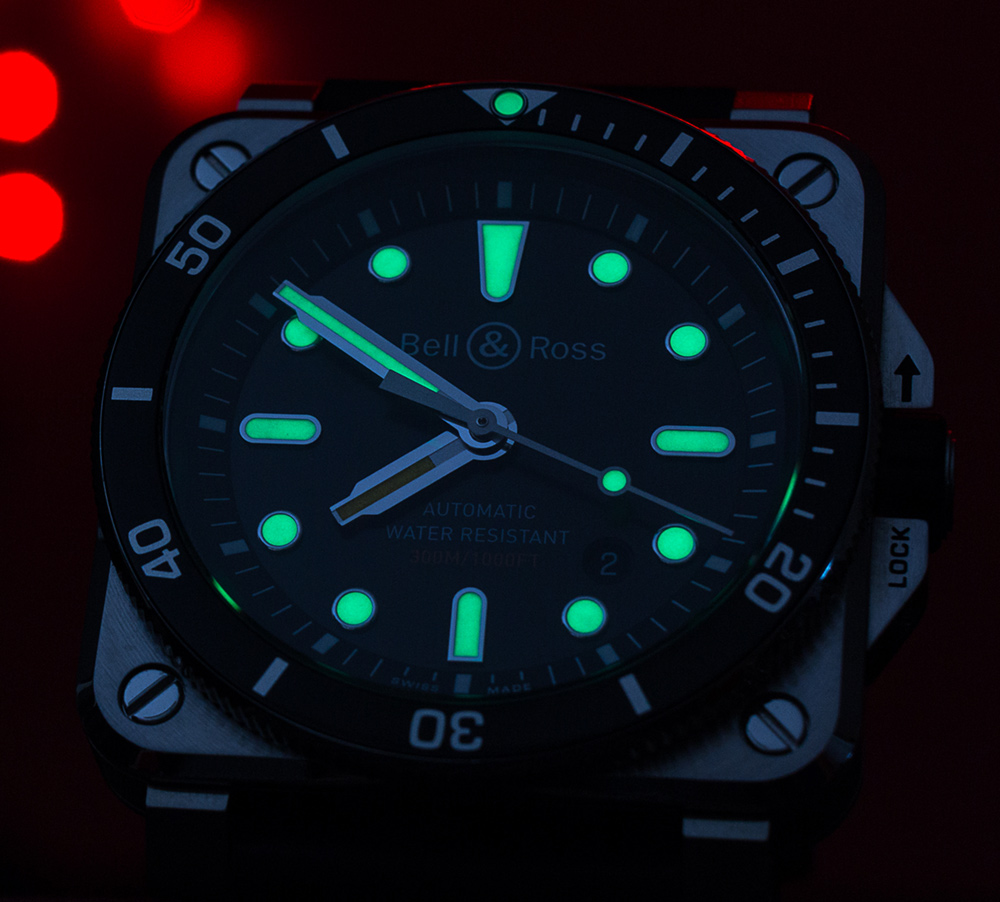 Considering that most dive watches are primarily used today to tell the time on dry land, I’ve often felt that the deemphasized hour hands found on many are kind of a sacrifice of real-life usability for the sake of being taken seriously as a “genuine” diver. Part of the ISO standards, however, stipulate that the minute hand should be more legible than the hour hand because the minutes are more critical when diving. For the Bell & Ross BR 03-92 Diver, legibility is not hampered by the orange lume for the hour hand, but it is indeed deemphasized in the dark with a (much) fainter glow while everything else (hands and markers) shines bright green with Super-LumiNova.