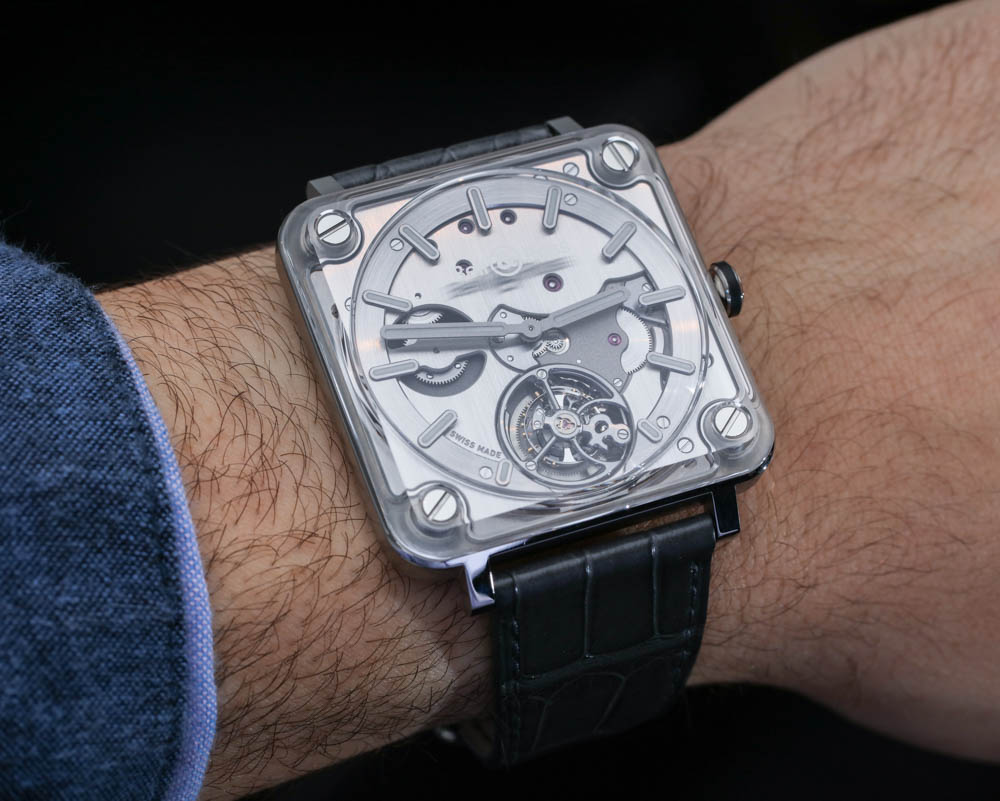 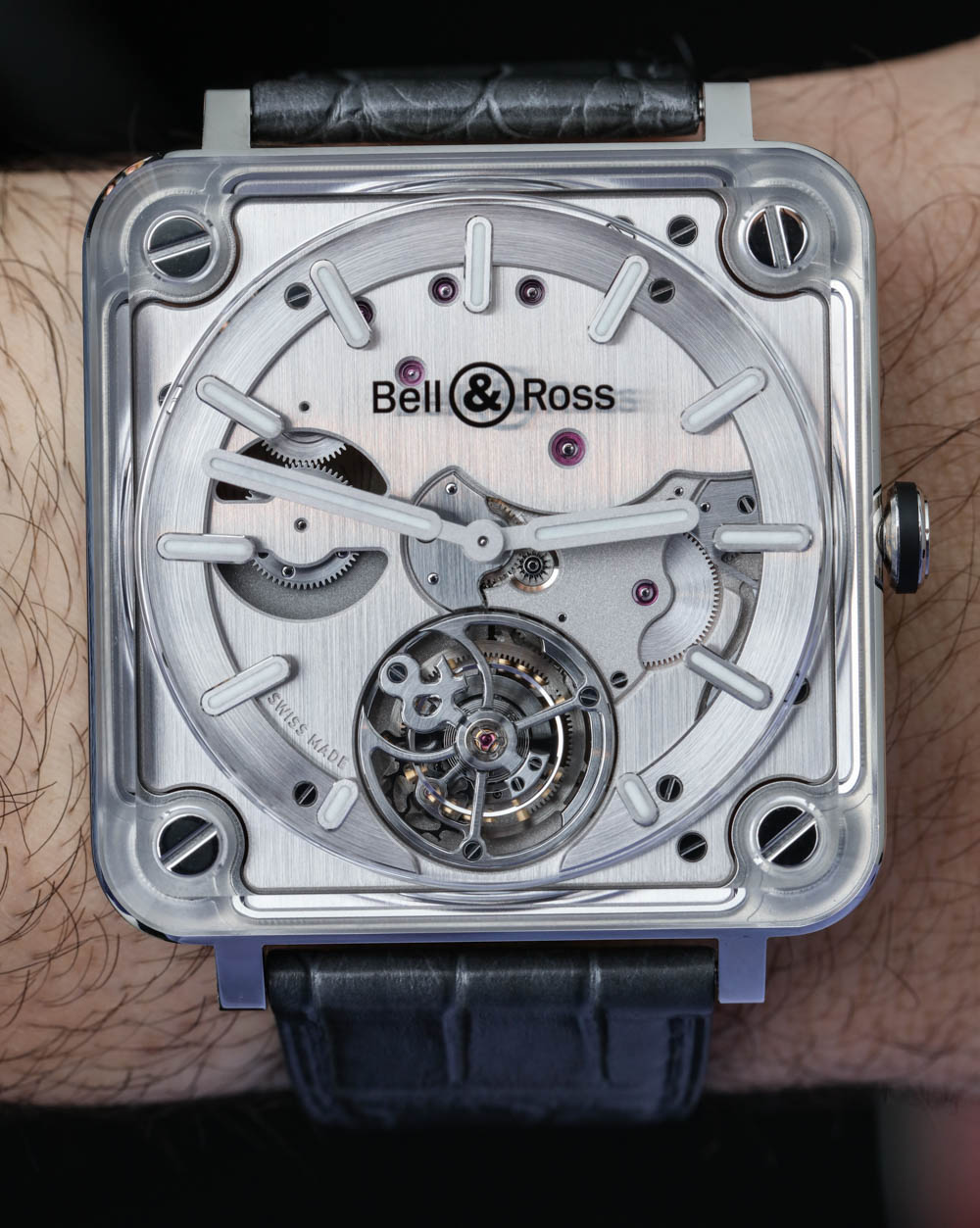 On day one of Baselworld 2017, one of the most interesting new watches I saw was the Bell & Ross BR X2 Micro-Rotor Automatic. With a new case, movement, and provocative design, this circa $65,000 limited-edition watch is a lovely testament to why we like wearing bold designs with conspicuous mechanical movements. Bell & Ross president Carlos Rosillo was wearing it at Baselworld’s Bell & Ross stand, enthusiastically showing it off – Mr. Rosillo gets more excited about his new products than almost any brand leader I know. 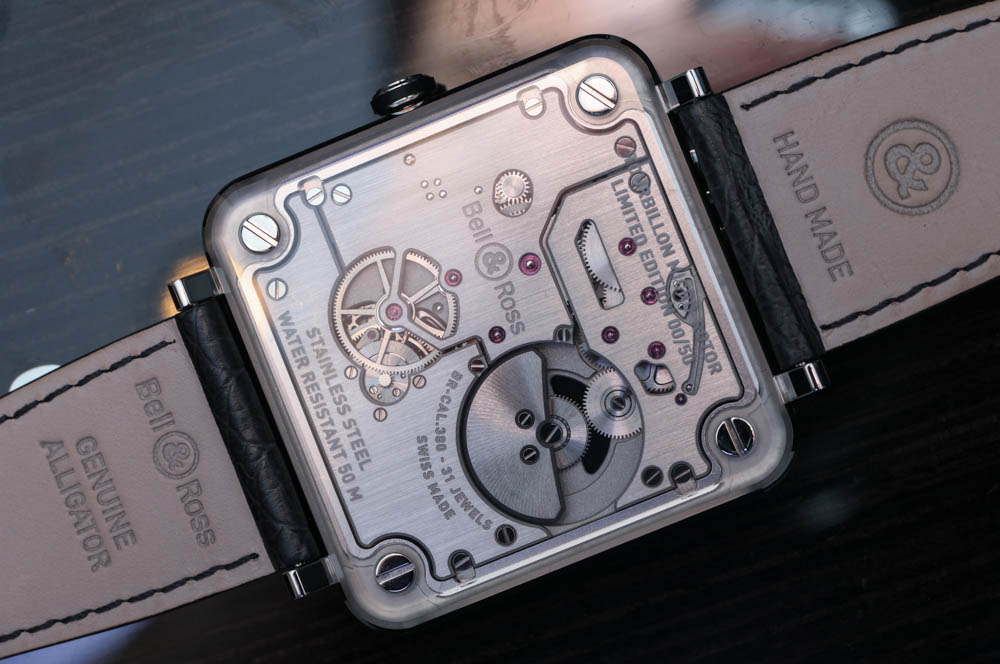 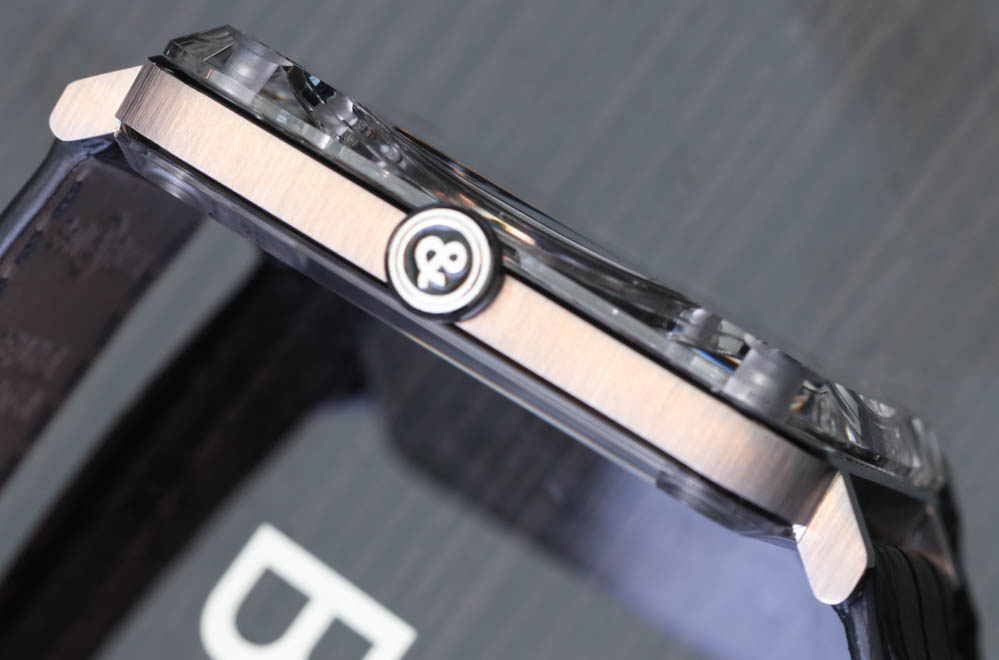 He asks me (probably rhetorically), “what is the most important part of a wristwatch?” I’m pretty sure I know he wants me to say “the movement,” so I do. “Yes,” and he proceeds to explain to me how the design philosophy of the BR X2 watch is all about removing what appears to be the separation of case and movement, instead melding it into one visual object. Thus, with a steel movement plate between two thick layers of carefully machined sapphire crystal, there is a transparent sapphire case that connects directly to the movement. The effect is both visually stunning and rather novel. 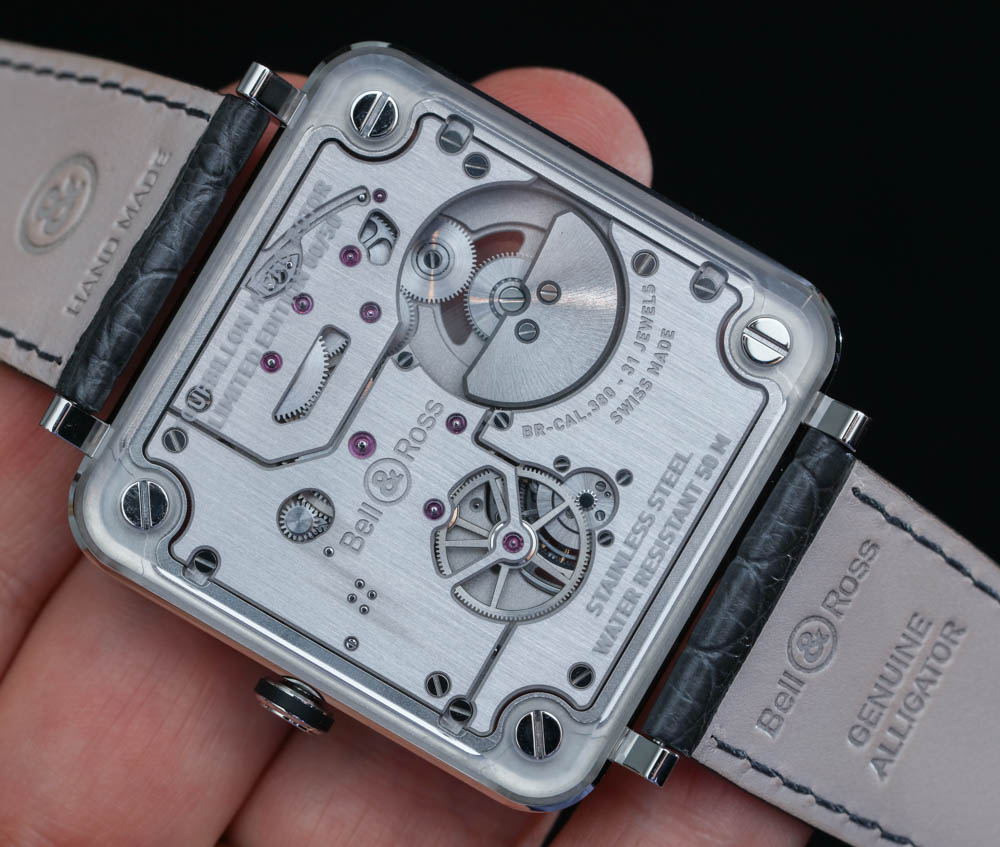 Bell & Ross does this entirely for visual spectacle – and it seems to work. When I last encountered a concept similar to this, it was in the Piaget 900P (aBlogtoWatch hands-on here) which merged the movement plate and watch case in order to make the thinnest mechanical watch movement in the world. While the Bell & Ross BR X2 Tourbillon Micro-Rotor Automatic is actually thinner-feeling than the brand’s other square-cased “Instrument” watches, it isn’t about breaking size records. More importantly, it is about looking darn cool while also being something movement nerds can faithfully stand behind. 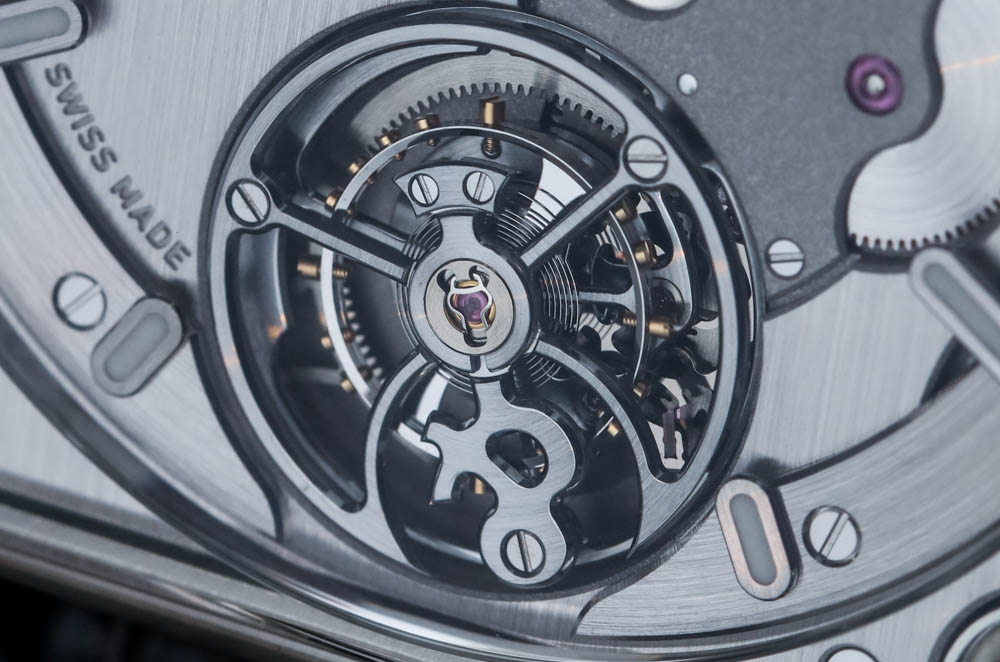 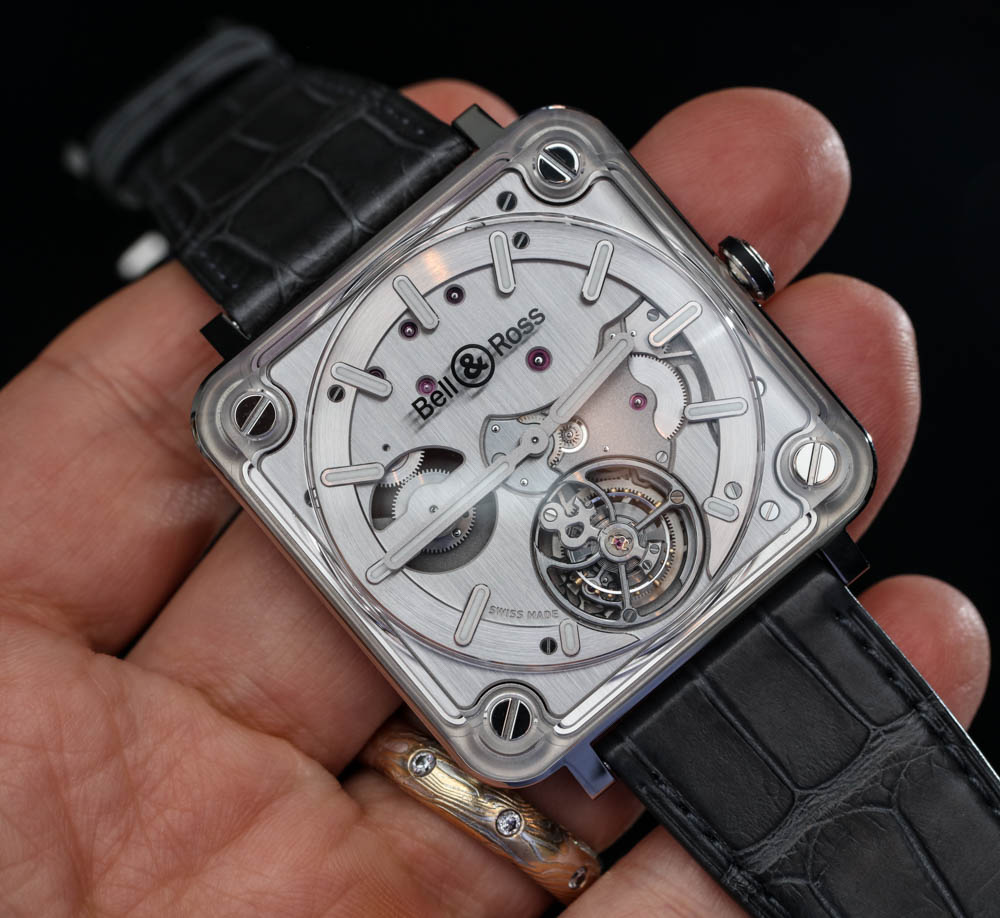 Bell & Ross worked with the Swiss movement maker MHC in order to produce the movement inside of the Bell & Ross BR X2 Tourbillon Micro-Rotor Automatic. The movement is, for the most part, simple (for a tourbillon) and satisfying, offering the time with tourbillon as the seconds indicator, and automatic winding via a micro-rotor which can be seen on the rear of the movement. Bell & Ross uses their now signature ampersand logo on the cage over the variable inertia balance wheel tourbillon mechanism. The tourbillon is decidedly wide in diameter in order to offer an expansive view on the dial. 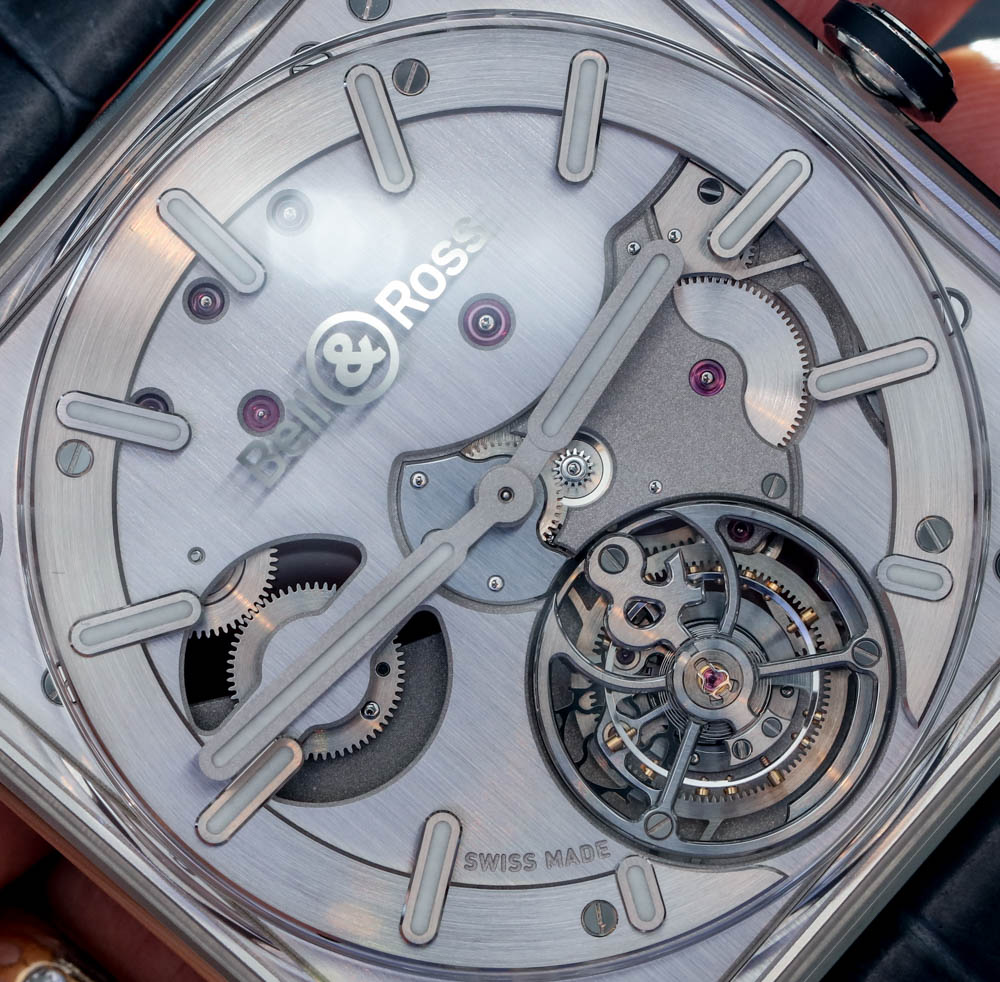 Gerald Genta-style hands and matching hour markers are tastefully placed on the top part of the movement bridge. These hands and hour markers are made a bit distinctive due to their size and coloration. While they are filled with Super-LumiNova luminous material, I feel that the satin-finishing of the hands blends in a bit too much with the dial in order to have ideal contrast for excellent legibility. The watch is rather legible when you look closely at it, but as is the case with many “artistic and complex” watches, legibility stands back a bit in favor of pure aesthetic expression. 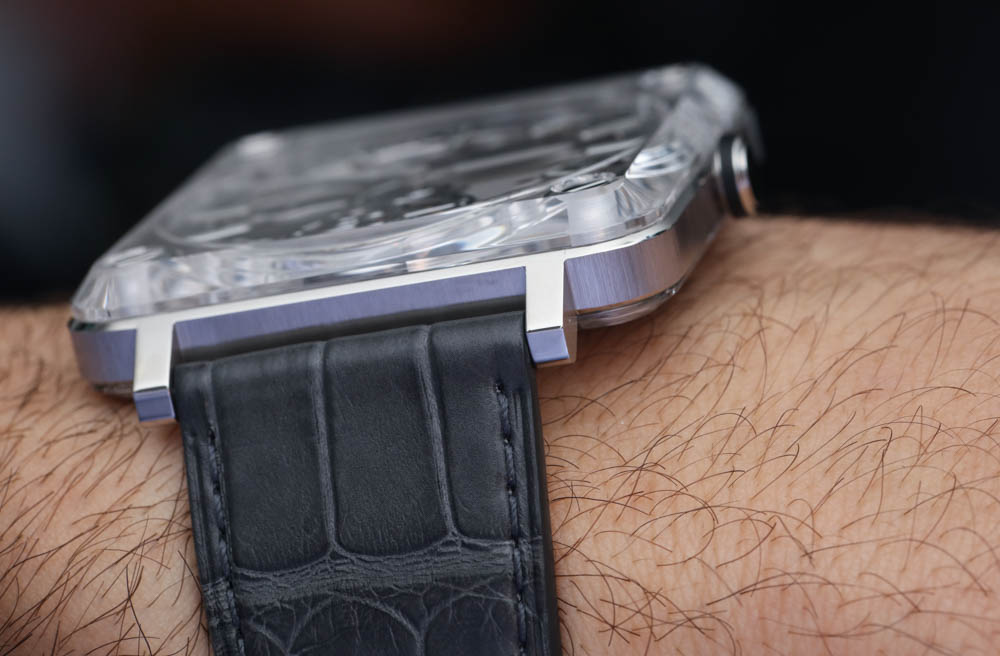 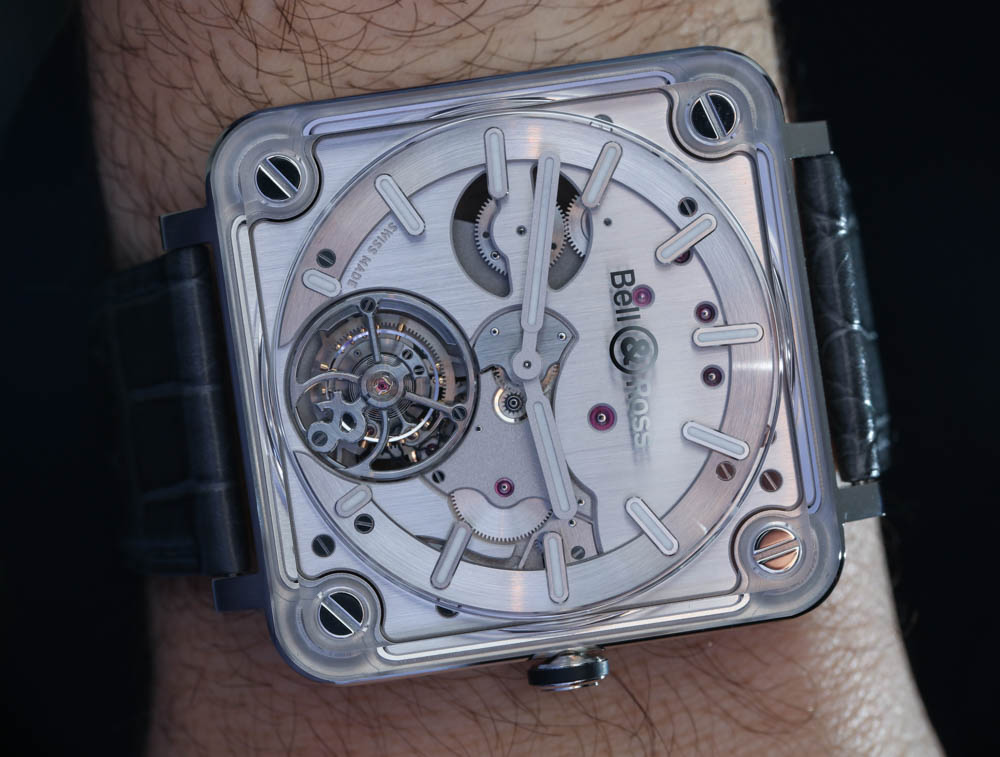 Looking at the Bell & Ross BR X2 Tourbillon Micro-Rotor Automatic case from various angles allows you to appreciate the interesting detailing and beveled edges of the sapphire crystal case top and rear. Clearly, the case is inspired by Bell & Ross’ now iconic BR01 and BR03 collection of square-cased watches. With that said, the case is actually a totally new size, even though it is based on the BR03 – which is 42mm wide. The Bell & Ross BR X2 Tourbillon Micro-Rotor Automatic is 42.5mm wide, so that’s only a slight difference. 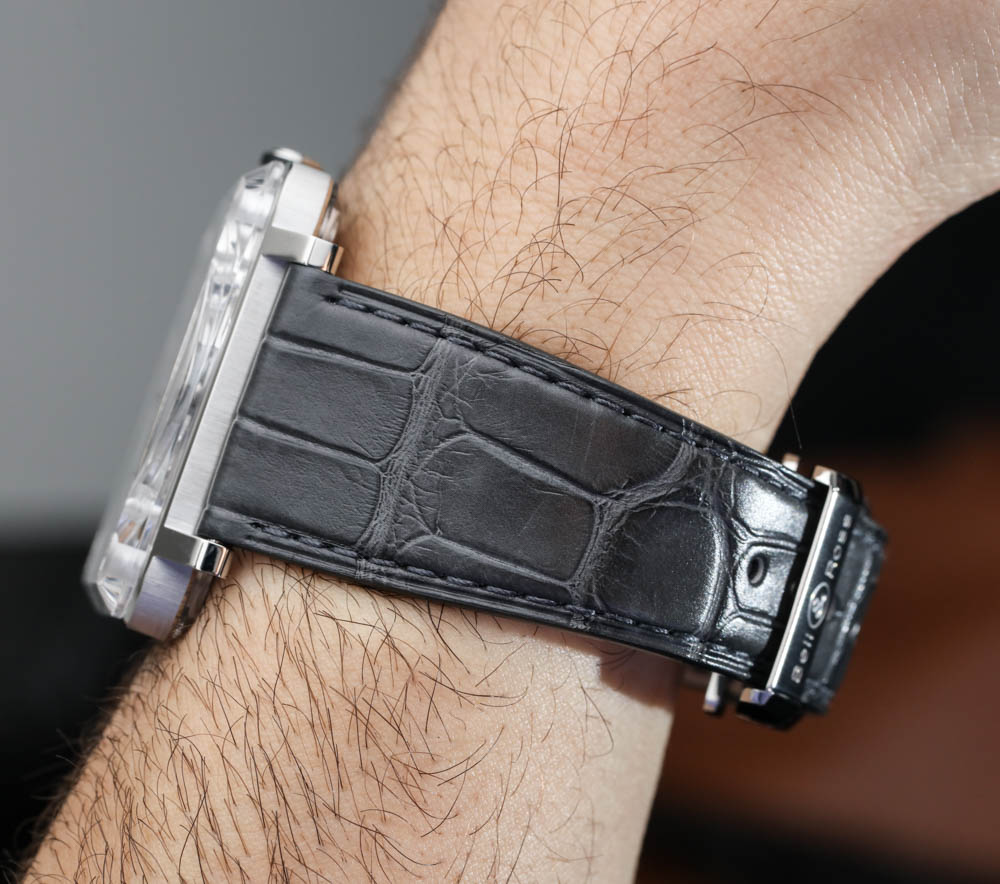 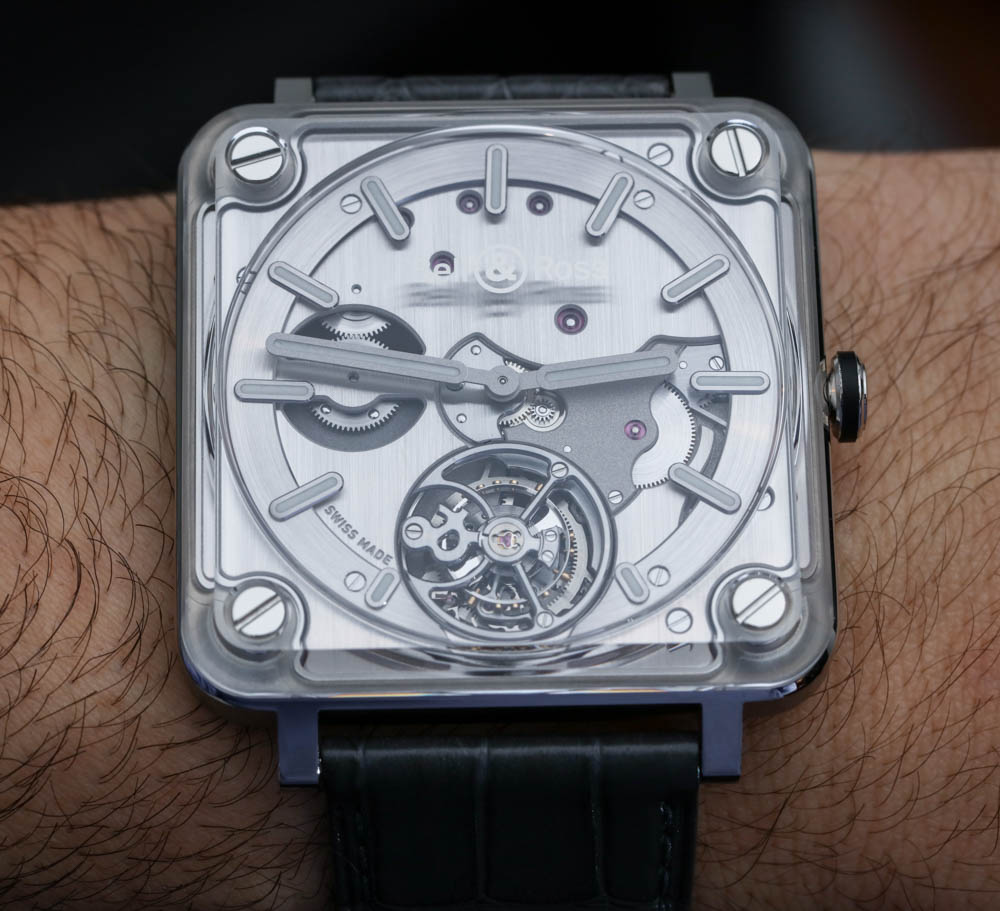 There are so many ways in which a design such as this could have gone wrong – but I credit Bell & Ross’ serious attention to design detail for making something like the Bell & Ross BR X2 Tourbillon Micro-Rotor Automatic work as well as it does. I think it requires a mixture of insisting on various design elements (such as the hour track ring on the dial to help emphasize the watch face) as well as restraint in not adding too much to the overall case and movement design. 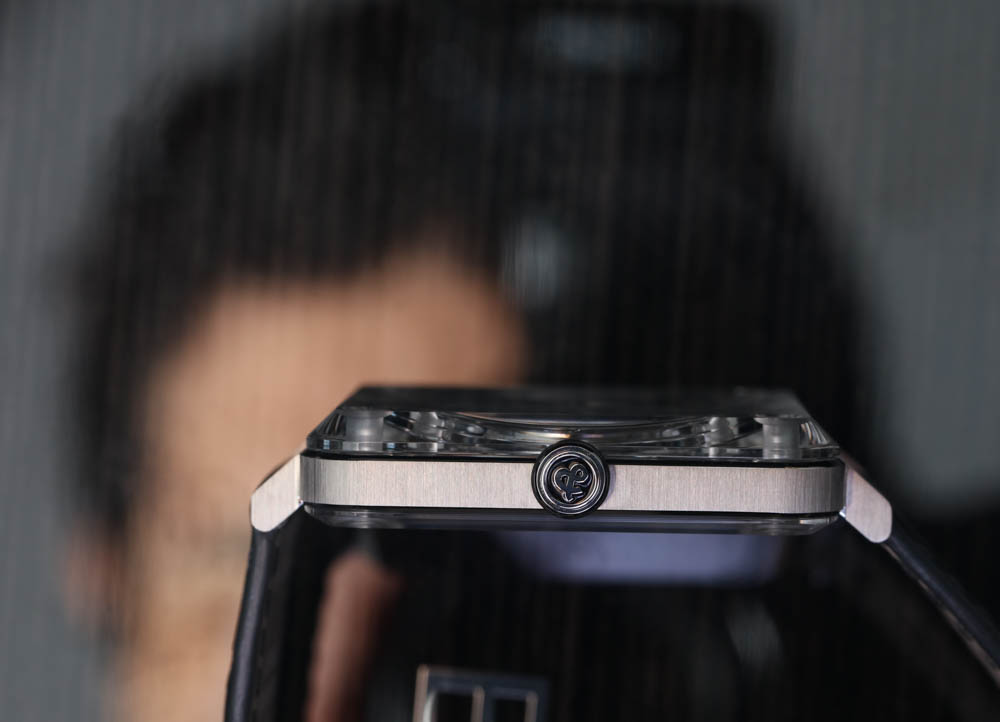 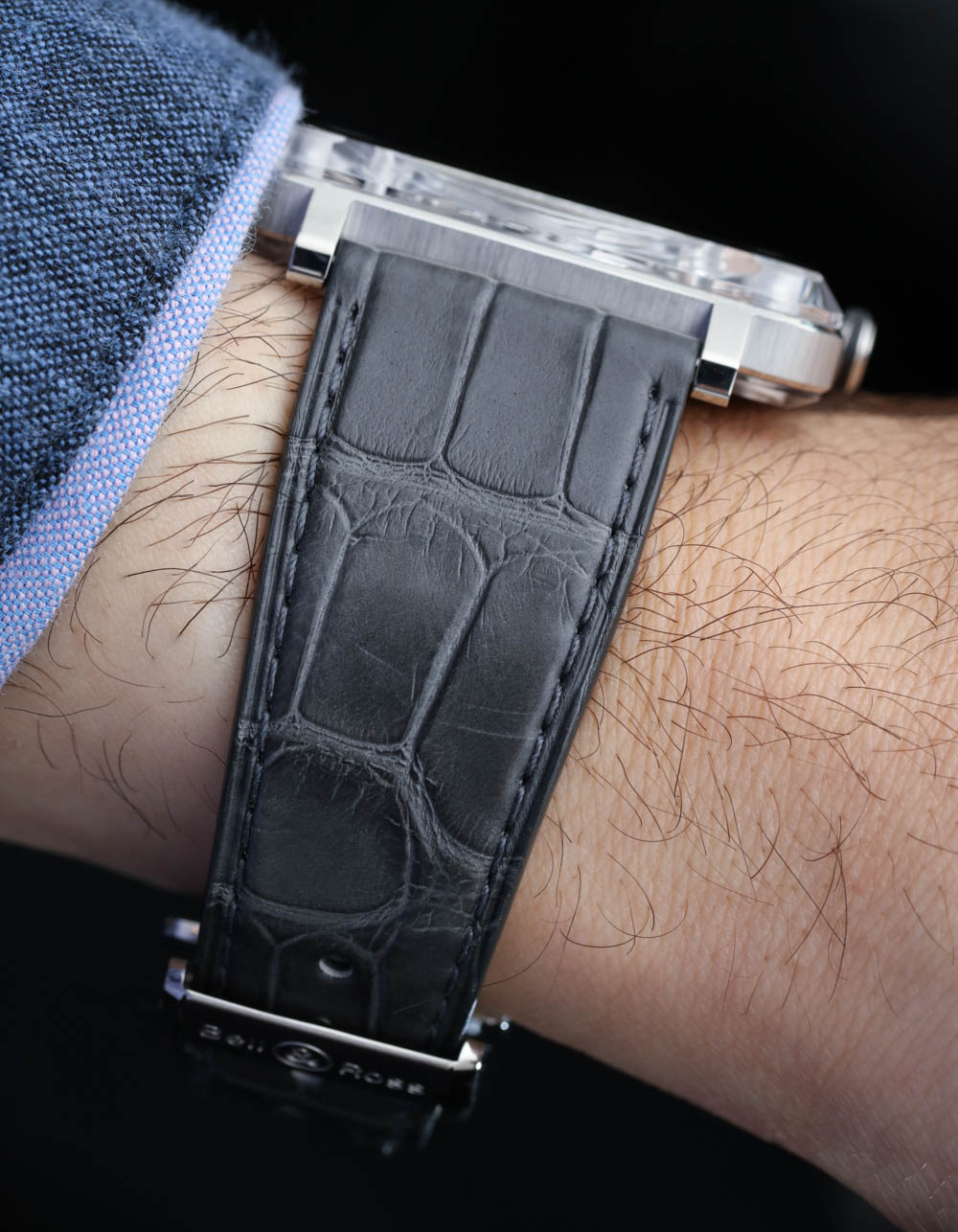 Best of all, with its 42.5mm-wide square case and thin profile, the Bell & Ross BR X2 Tourbillon Micro-Rotor Automatic is a rather comfortable timepiece making it totally acceptable for daily wear. This debut model (I have a feeling this is a concept Bell & Ross will return to in years to come) is placed on a tapered light gray alligator strap. What I think is most impressive about the overall look of the Bell & Ross BR X2 Tourbillon Micro-Rotor Automatic is that it is decidedly a watch for mechanical movement lovers, but is able to retain a masculine sex appeal and does not look nerdy (as concepts such as this tend to do). 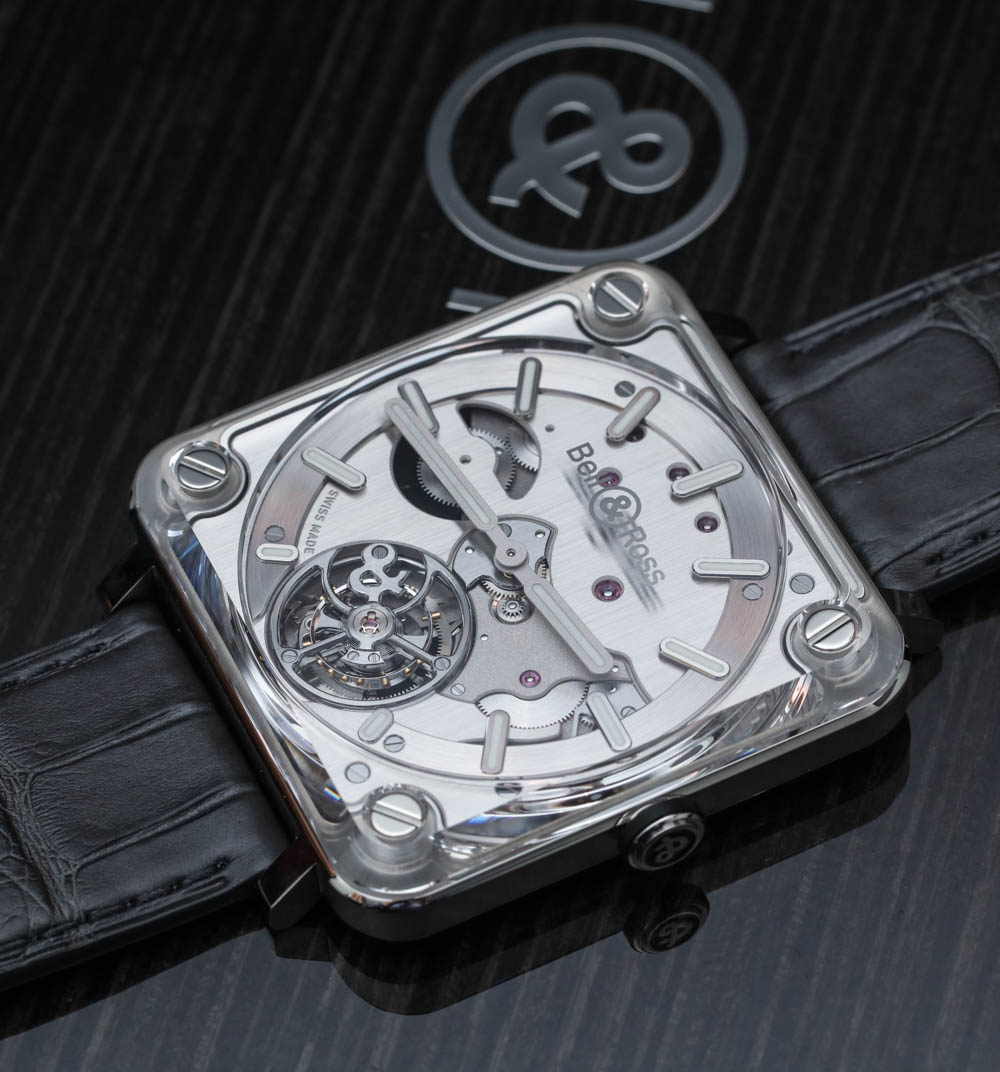