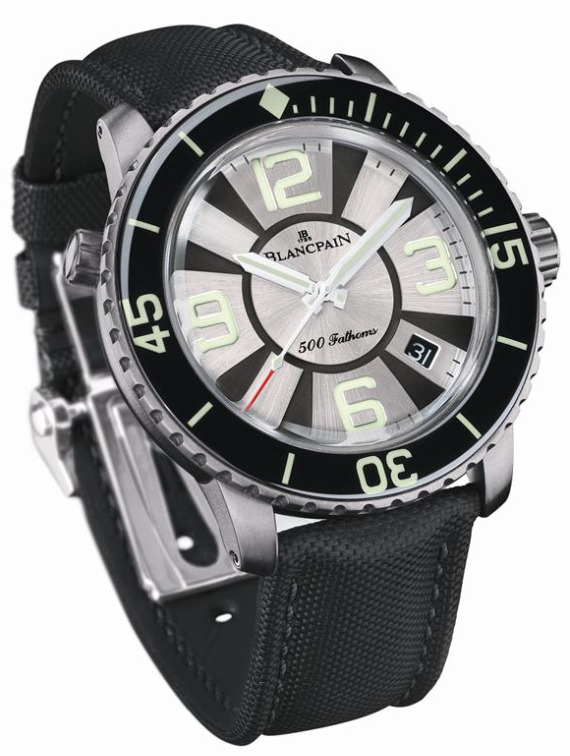 Wow, I did not expect to see something so bold from Blancpain this year. This is a totally new route for their diving watches. At first I was torn about the look (didn’t see to be much more than what Invicta could come up with), but then I began to appreciate the more subtle items. Retained are the sapphire crystal tops on the rotating bezel (such a nice feature by the way), and new are the hands, and the face. The hands are really designed for perfect legibility in both light and dark situations, not one or the other which is sometimes the fact. They also remind me of torpedoes. I think that is intentional. The wild looking lume on the face is also fucntion, and not just for show. Somehow, it seems to make the watch easy to read in the dark when you aren’t used to simply using the hands.

Blancpain opted to go with a light weight titanium case for this large 48mm wide watch. Added to the case is a helium escape valve, which might be useful for a handful of you out there. The original watch is the Blancpain 50 Fathoms (actually not that deep). The newer watches retained the 50 Fathoms name, but Blancpain felt it was a good idea to up the values. I don’t recall how deep a fathom is, but forget about it. The 500 fathoms is water resistant to 1000 meters. So don’t go trying to make a value conversion from fathoms to feet now. 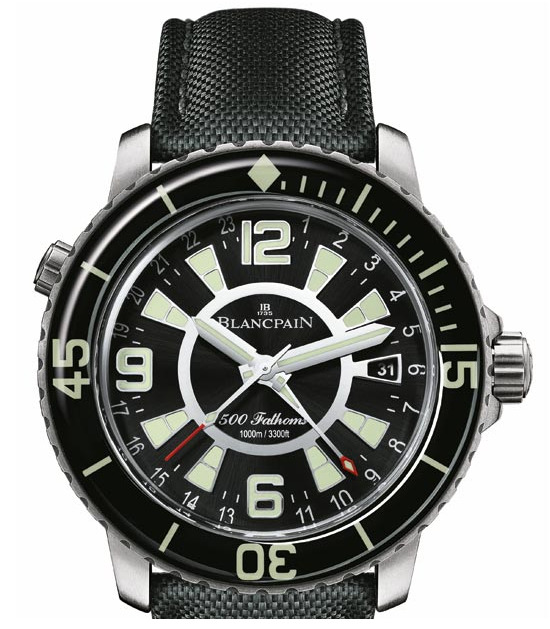 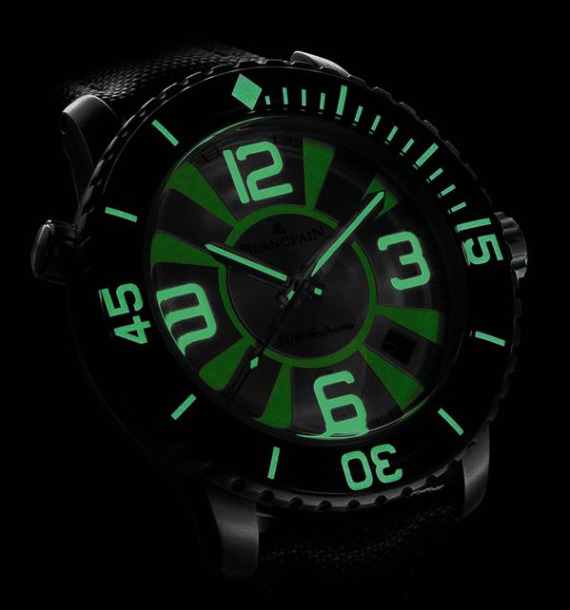 The movement is one of the best in the industry. It is the Blancpain Calibre 1315. There is also the GMT model with the 5215 movement. The automatic mechanical movement is specially made for sports watches. This basically means that it has lots of shock resistance. It further has a whopping 5 days (120 hours) of power reserve through three mainspring barrels! That is a lot. well over 2-3 times what you see in most similar movements. Rare for a 1000 meter water resistant watch is the sapphire movement window on the caseback. The rotor you will see is styled after a boat propeller, which is appropriate. The movement also features a fast date adjust at midnight. This basically means that the date window immediately moves to the next date at midnight, rather than slowly move over an hour or so. You can also manually adjust the date both ahead and behind. A nice touch for a luxury watch.

The strap is really cool as well. It isn’t new for this watch, but Blancpain as always provided an super high quality coated canvas strap that is retr0, comfortable, and stylish all at the same time. So there you have it, a brand new, really interesting sports watch from Blancpain that furthers the reach of the “Fathoms” watch line. We have really come far from that watch developed to only be resistant to 50 fathoms under water. For me, the 50, and now the 500 Fathoms have always had a place on that short list of, “if I could only wear one watch, I would have one of these watches.” Maybe you feel the same. Price will likely be over $10,000, probably shy of $15,000.