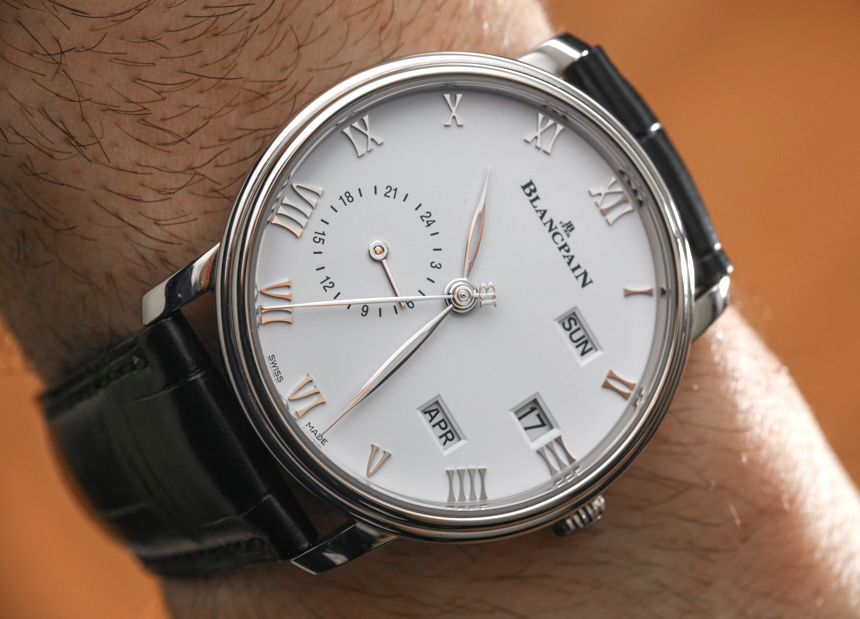 Blancpain continues to be a strong provider of unique and interesting movements in what often feels like a sea of mechanical genericism, even in the luxury watch industry. Look closely and you’ll see in Blancpain watches genuinely innovative attempts that are creating new assortments of existing ideas, as well as some novel ones. Today, I’d like to look at the Blancpain Villeret Quantieme Annuel GMT watch which we first covered here. It comes in 18k white gold, 18k rose gold, as well as in steel – all with various dial styles. It’s updated for 2016 based on a movement that launched in 2011. 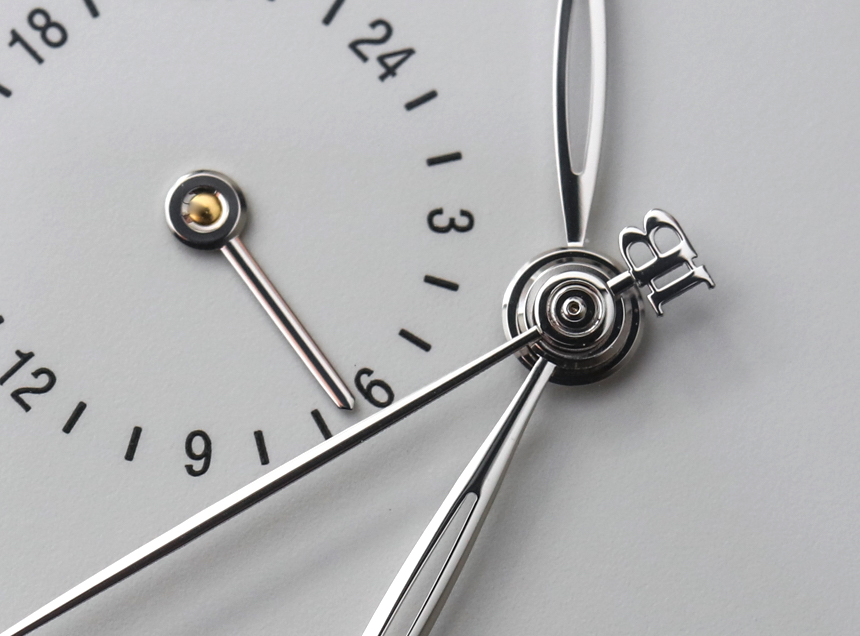 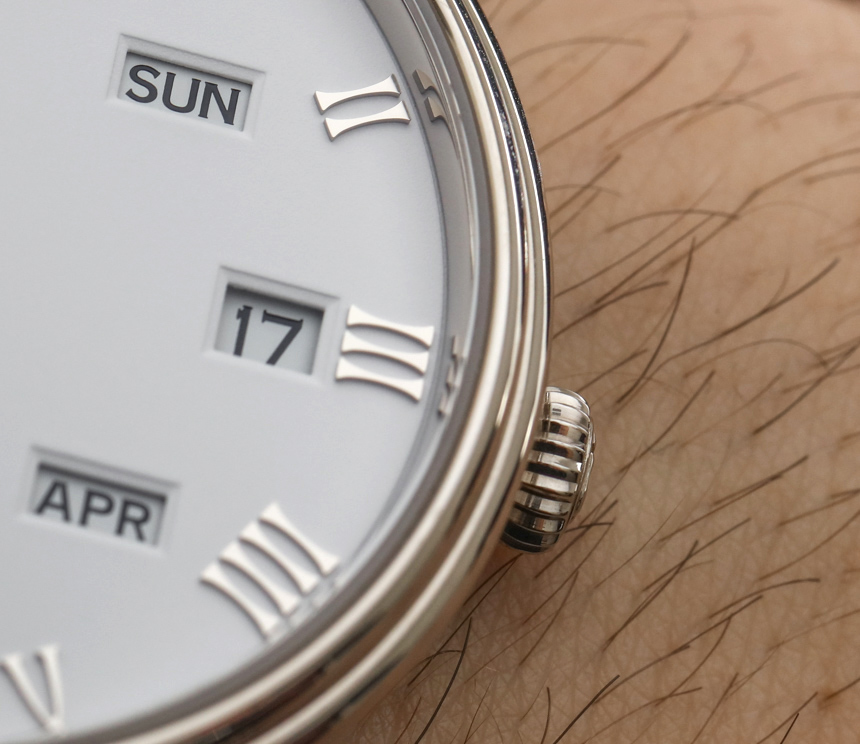 At its heart, this watch is about offering a unique layout for two complication sets that you don’t frequently find together. That is a subsidiary GMT hand to indicate a second time zone, as well as an annual calendar complication. The latter is rather elegantly laid out with the calendar information being indicated via three distinct windows on the dial. Underneath is a series of three discs which overlap. What is interesting is that despite the volume of information on the dial (time, second 24-hour time zone, date, day, and month) the face of the Blancpain Villeret Quantieme Annuel GMT is relatively sparse and clean. 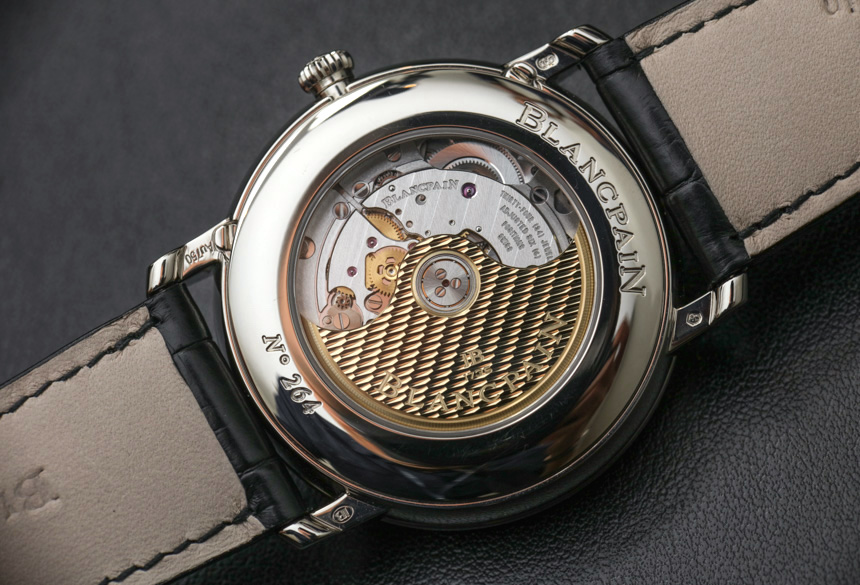 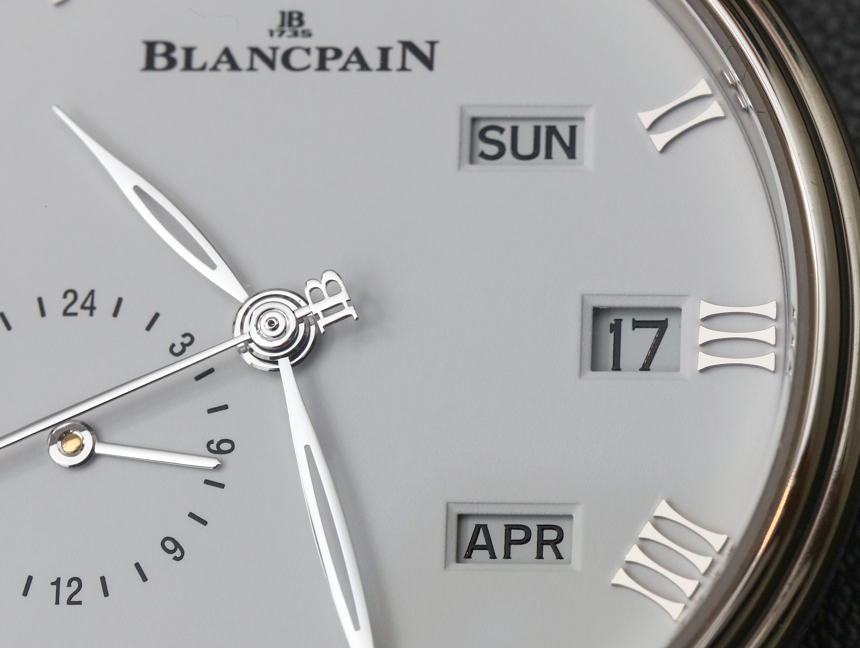 Lovers of purely symmetrical dials will likely find the eccentric layout on the Blancpain Quantieme Annuel GMT dial bothersome, and those who like a bit of asymmetry in their watches will appreciate the look as well as the immaculate legibility. This steel version of the Blancpain Quaniteme Annuel GMT is the cleanest looking of the series. The 18k red gold version has a “sunburst grey” dial, while the 18k white gold model has the most intricate-looking dial that is “stamped flinque opaline.” 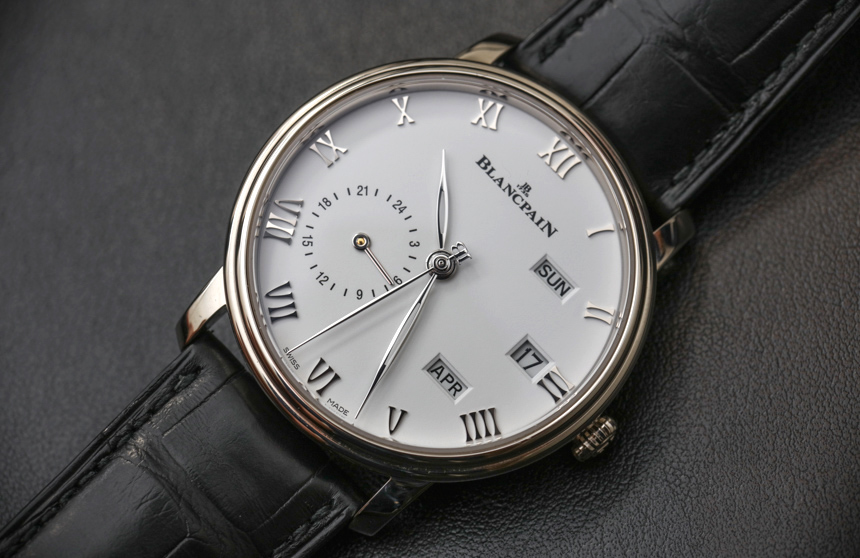 Let me add here that the model you are seeing images of is actually in an 18k white gold case, but it seems as though Blancpain will produce it as a steel model and the same 18k white gold case for another dial option. This is a possibility, but it’s hard to confirm, as their website is unclear as to whether or not an 18k white gold model with this clean white dial is available. 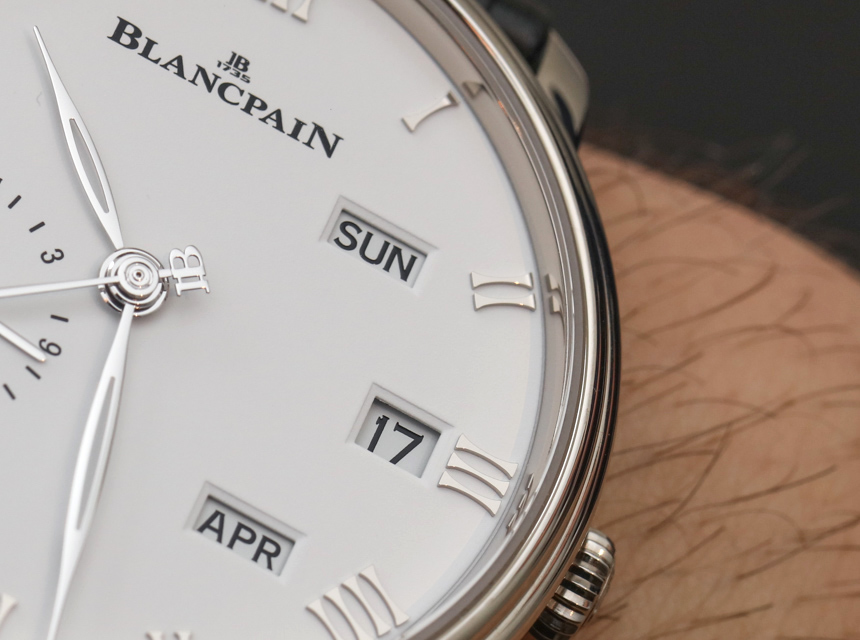 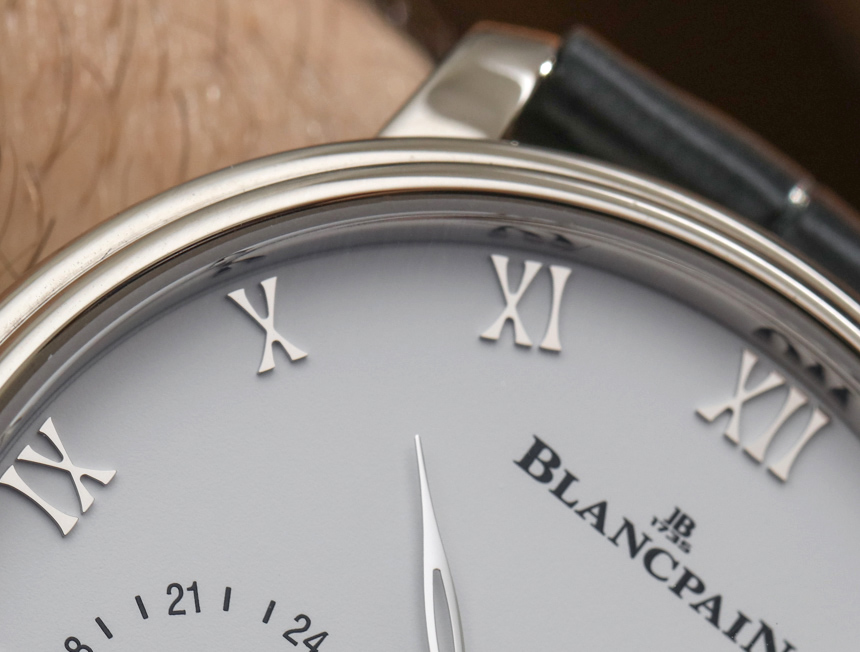 As a dress watch, I like the calming effect of the clean dial that is otherwise very functional. The 40mm-wide case is 11.04mm thick, and water resistant to 30 meters. It wears nicely thanks to the comfortable case and looks larger given the thin bezel structure. Distinctive Blancpain Villeret-style Roman numerals and matching leaf-style hands add to the brand’s signature look. In steel and red gold, the Blancpain Villeret Quantieme Annuel GMT watch even comes on a matching bracelet option that I quite like – in addition to the black alligator strap choice. 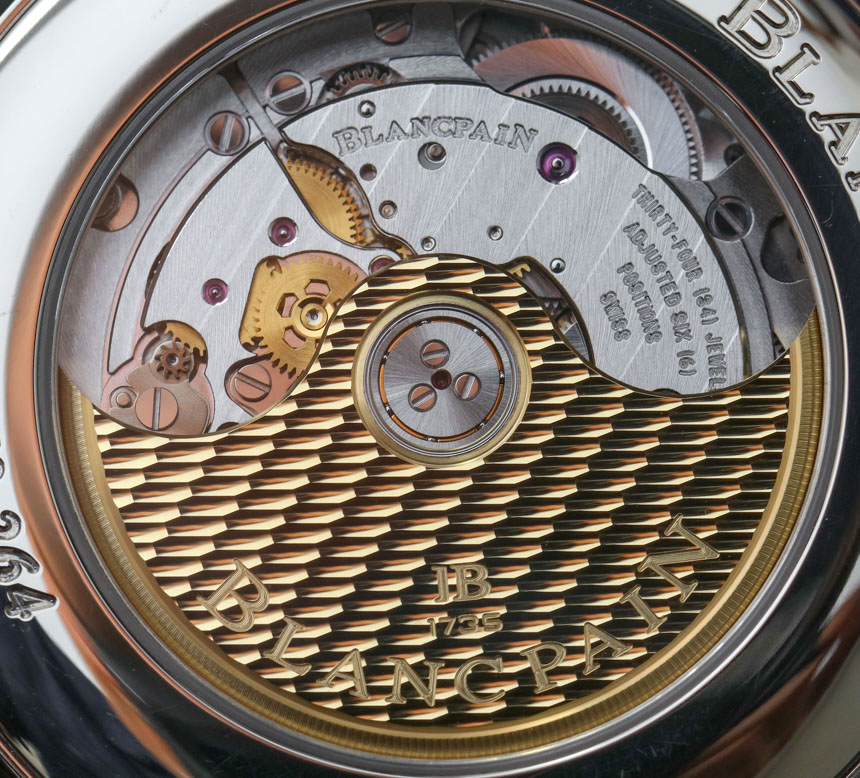 Manufactured in-house by Blancpain, the Blancpain Villeret Quantieme Annuel GMT watch contains the caliber 6054F automatic movement – whose gold rotor is very nicely decorated. While the movement architecture is decidedly modern in its aesthetics, you still see a lot of haute horology hand-finishing. The movement operates at 4Hz (28,800bph) and has a power reserve of 72 hours (three days). 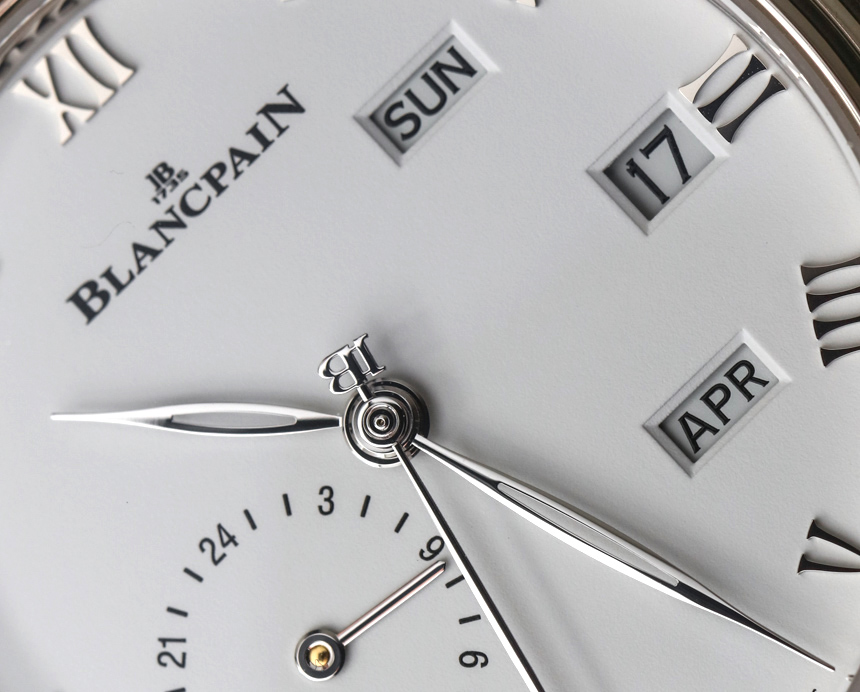 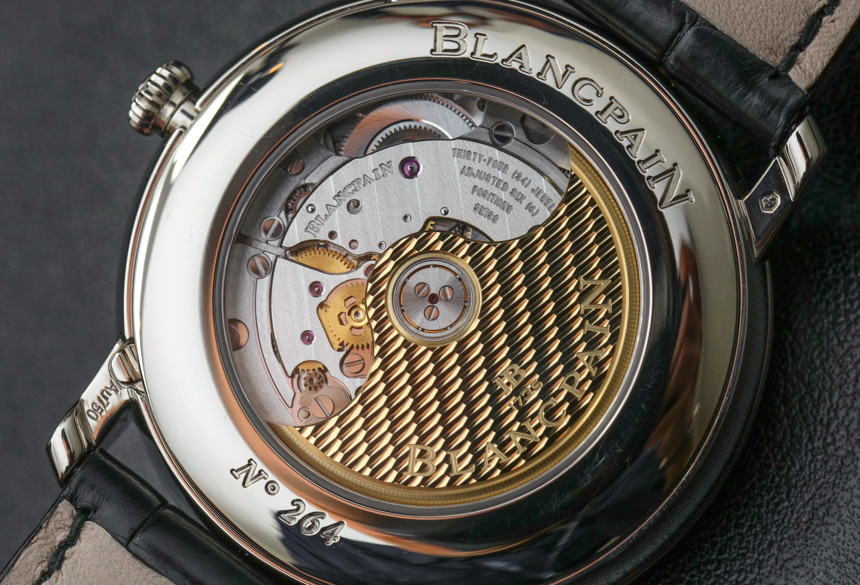 The movement has some additional interesting elements which merit discussion. These include being produced from 367 parts, using a silicon balance spring (for accuracy) and employing Blancpain’s brilliant “under lug correctors.” Look closely under the lugs and you’ll notice small pushers that you can operating with your fingers. These have a few benefits. First is that the watch does not need to rely on unattractive inset pushers on the side of the case. Second is that you don’t need a special tool in order to adjust the GMT or calendar settings. On most watches with in-set pushers, you need a stylus to operate them – and if you use something metal, you risk scratching the watch. This is just one of the many little ergonomic marvels you see far too rarely in the world of high-end watches. 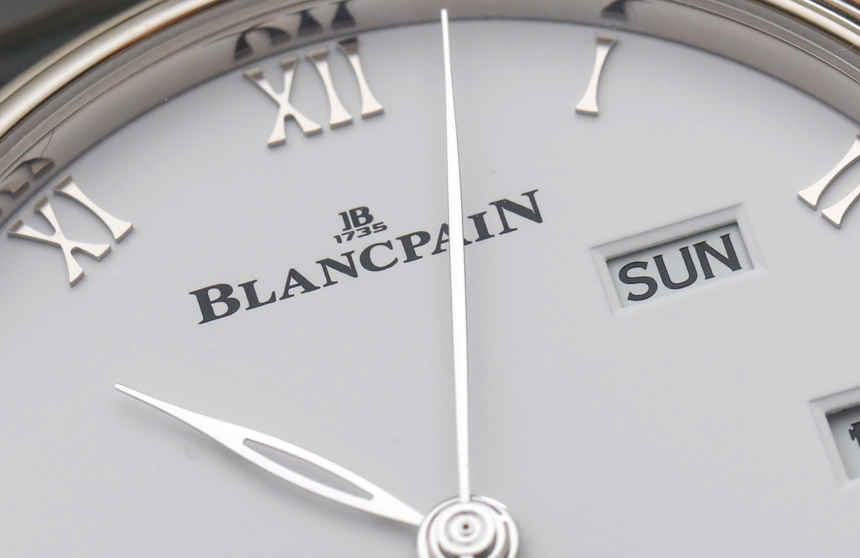 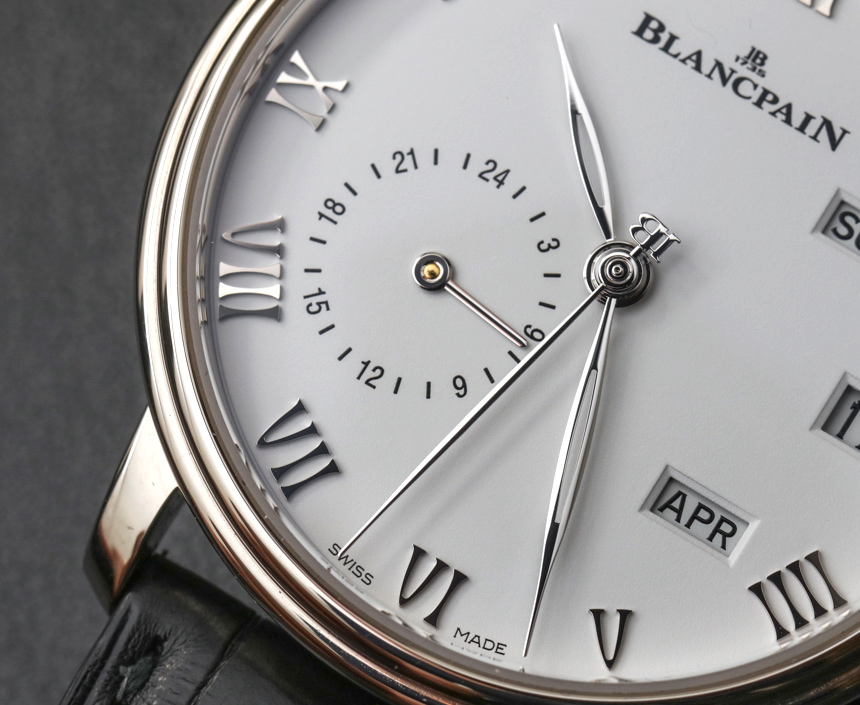 As you can see, the relative simplicity of this Blancpain Villeret Quantieme Annuel GMT watch hides some appealing details once you take a closer look. That isn’t the fact with all Blancpain models, but Blancpain is a brand that tends to be pretty poor at explaining its own best virtues (so we try our best to do it for them when possible). 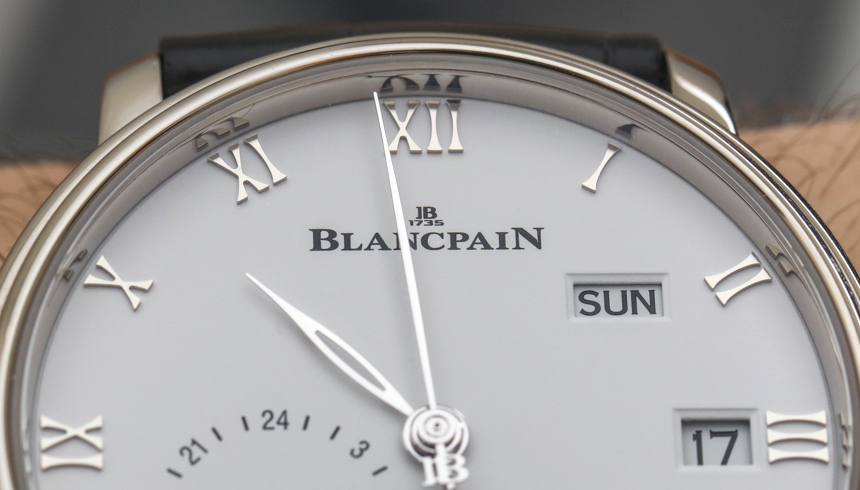