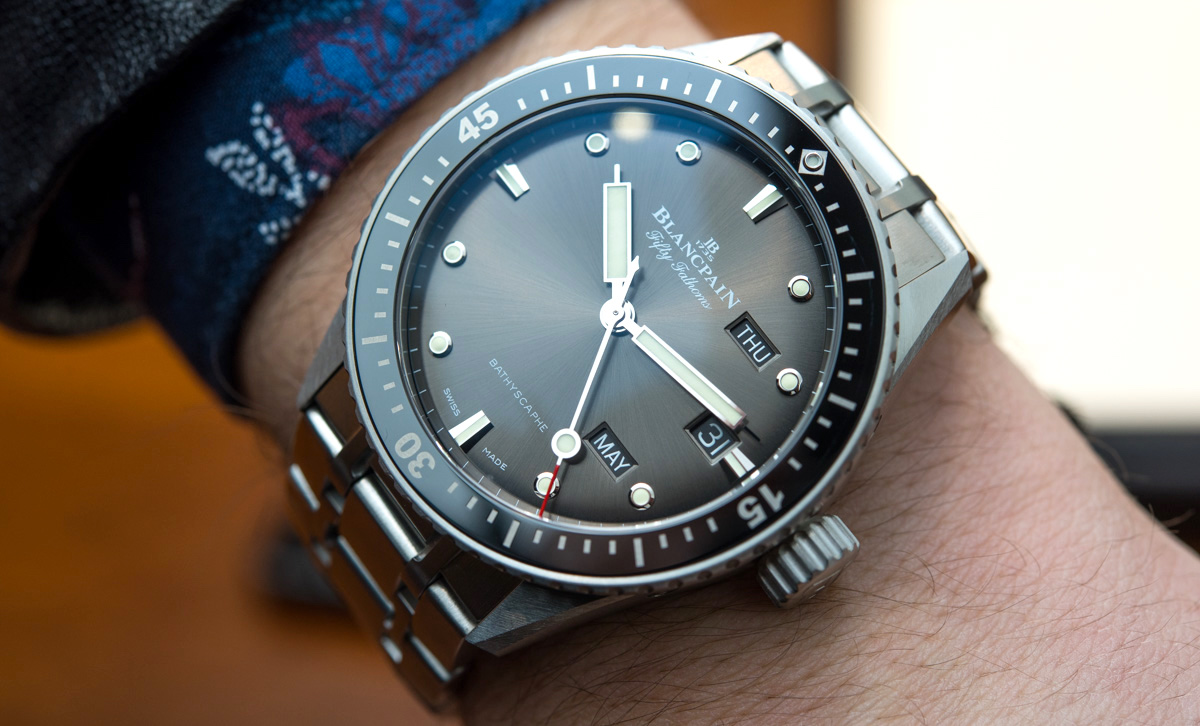 I had two options: a) write about the morbidly random Fifty Fathoms Moonphase – that appears to have disappeared from the internet as we know it and so, on a dark and gloomy day, I apparently will have to write it up anyway; or b) discuss the Blancpain Fifty Fathoms Bathyscaphe Quantième Annuel, hoping that I’d like it a bit more. The common theme shared by the two is Blancpain lifting totally-non-dive-watch-specific complications into the Fifty Fathoms line, the daddy of all dive watches. 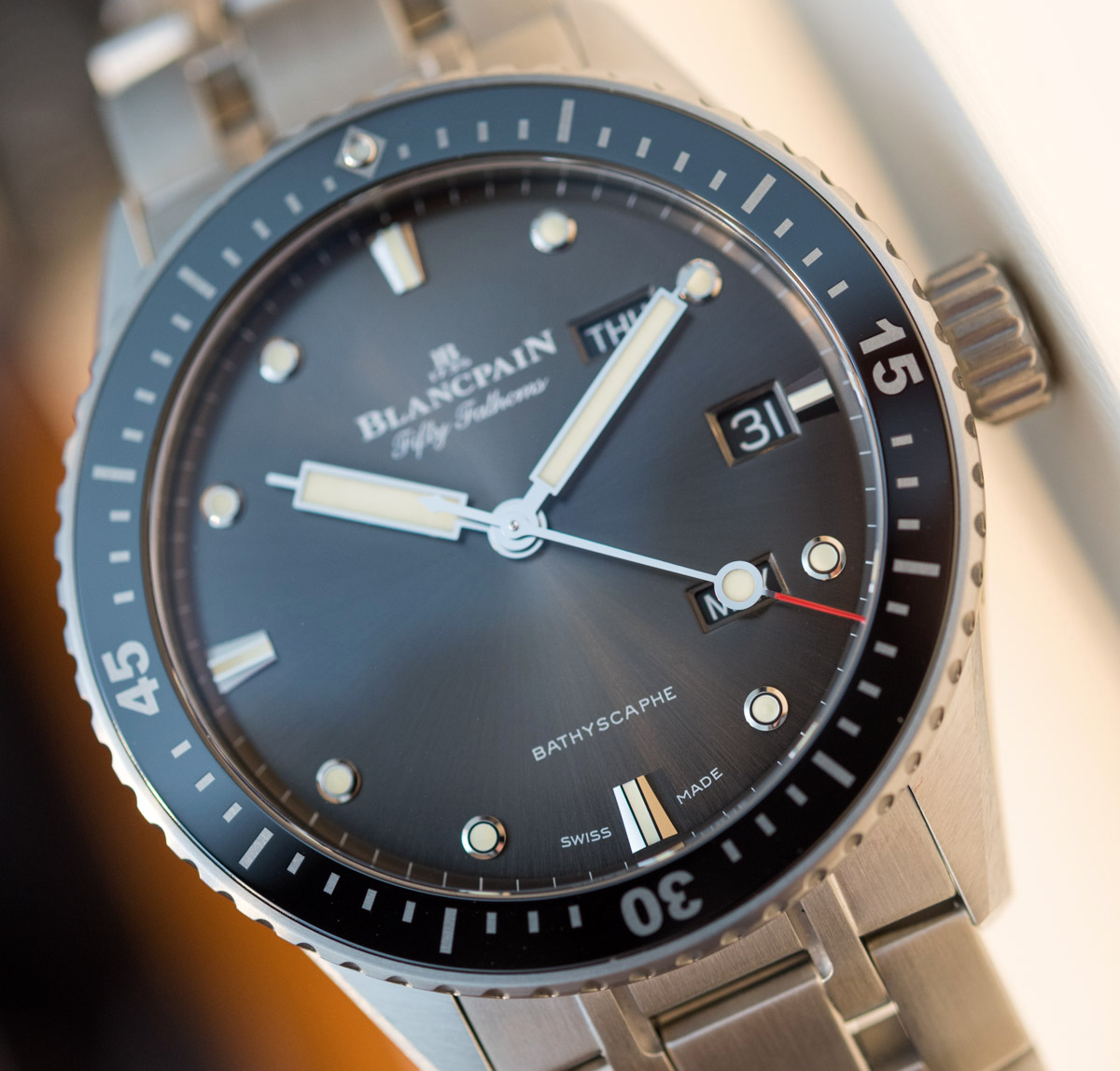 The one with the moon phase is so bad, I feel tempted to write about it here, but I’ll keep my positive mindset and instead bring you the details of this cool-ish, albeit confusing new Bathyscaphe. Before we set off, allow me to suggest a fun mind game. As you are reading through and are looking at the images, try and make an educated guess on the price. Now, don’t cheat, it’s only fun if you consider where the dive watch market currently is and with that in mind, try and guess how well (or unwell) this steel watch is priced to fit into it all. Without further ado, behold, the Blancpain Fifty Fathoms Bathyscaphe Quantième Annuel. 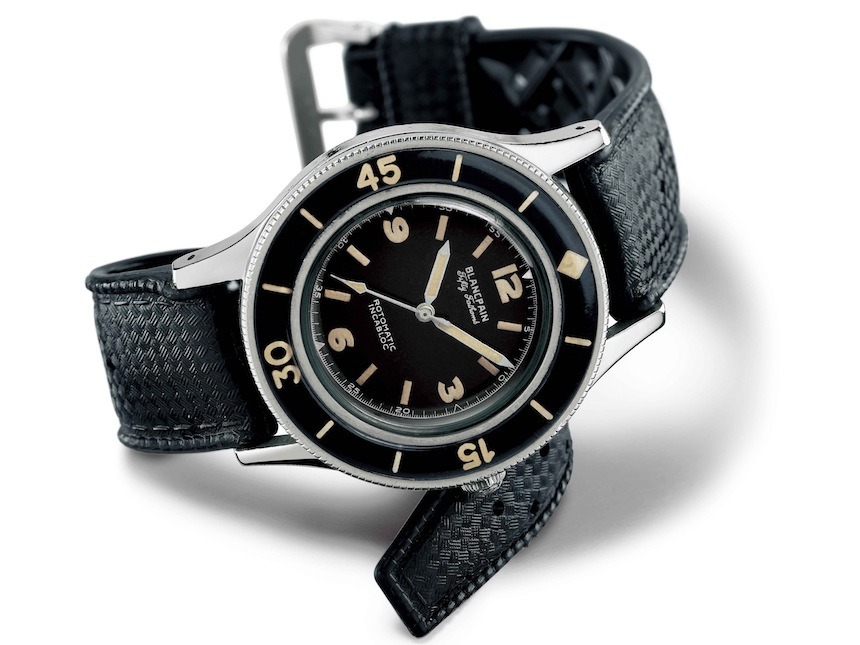 An original Fifty Fathoms from around 1953.

Let’s clear something up right away: I called the Fifty Fathoms the daddy of all dive watches and I want to clarify that I understand that is a big claim to make. To anyone with a doubt, I’d suggest reading our exhaustive History of Dive Watches article, where I discuss in more detail why this claim stands. In short, for now, all I’ll say is that the 1953 Blancpain Fifty Fathoms was the first ever dive watch that contained and defined all the functionalities and considerations in terms of design and capabilities that all dive watches that came after it were expected to have. It, in many ways, was an ISO 6425 dive watch… before that ISO standard was even a thing. The Bathyscaphe was launched as the “civilian version” of the Fifty Fathoms – hence the full name Fifty Fathoms Bathyscaphe – in 1956, bringing the original’s size down to more wearable levels. Again, for more, please check out the article. 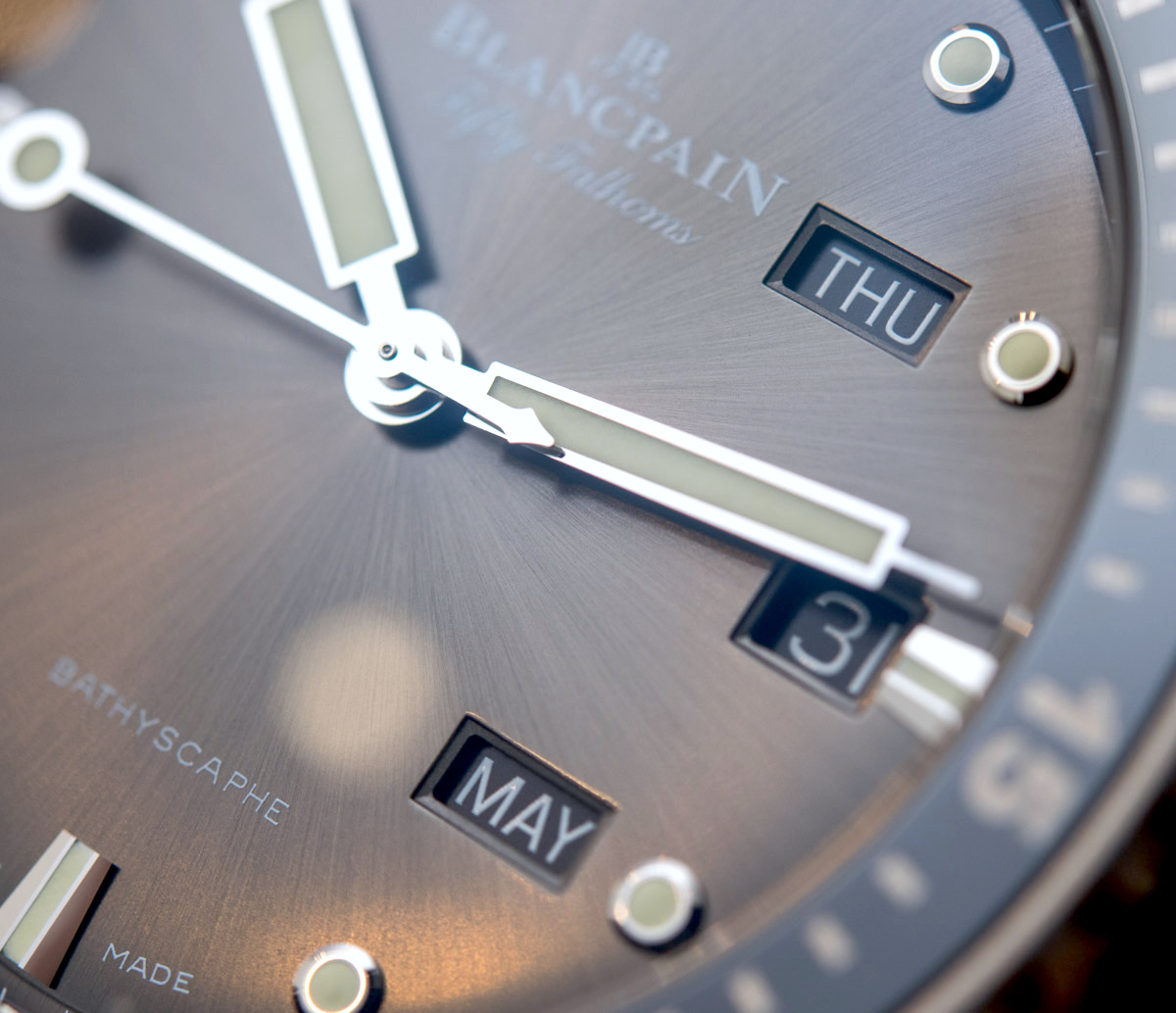 The Bathyscaphe, as such, is of course a full-on dive watch and although Blancpain has produced countless iterations of it over the last number of years, this particular, new-for-2018 piece that we are looking at today does, in Blancpain’s own words, “pair for the first time sport with a useful complication in a new annual calendar.” Now, for the longest time I have been wondering whether Blancpain has been living under a rock – or, perhaps rather more fittingly, somewhere deep under water – and this bold claim has, I think, brought me closer to an answer.

Let me jump right into it and say what I’ve said before: annual calendars and perpetual calendars, although technically impressive, are some of the least “useful” and, I think, least entertaining complications hitherto invented in horology. An annual calendar is useful a whopping four times a year with February not counting into the number of months in a year when the annual calendar can show what it does best and jump 31st straight to the 1st of the following month. I get that it’s cool to know that the watch is capable of keeping track of these things… but I think we’ll agree while it is “cool,” it isn’t nerve-wrecking exciting. 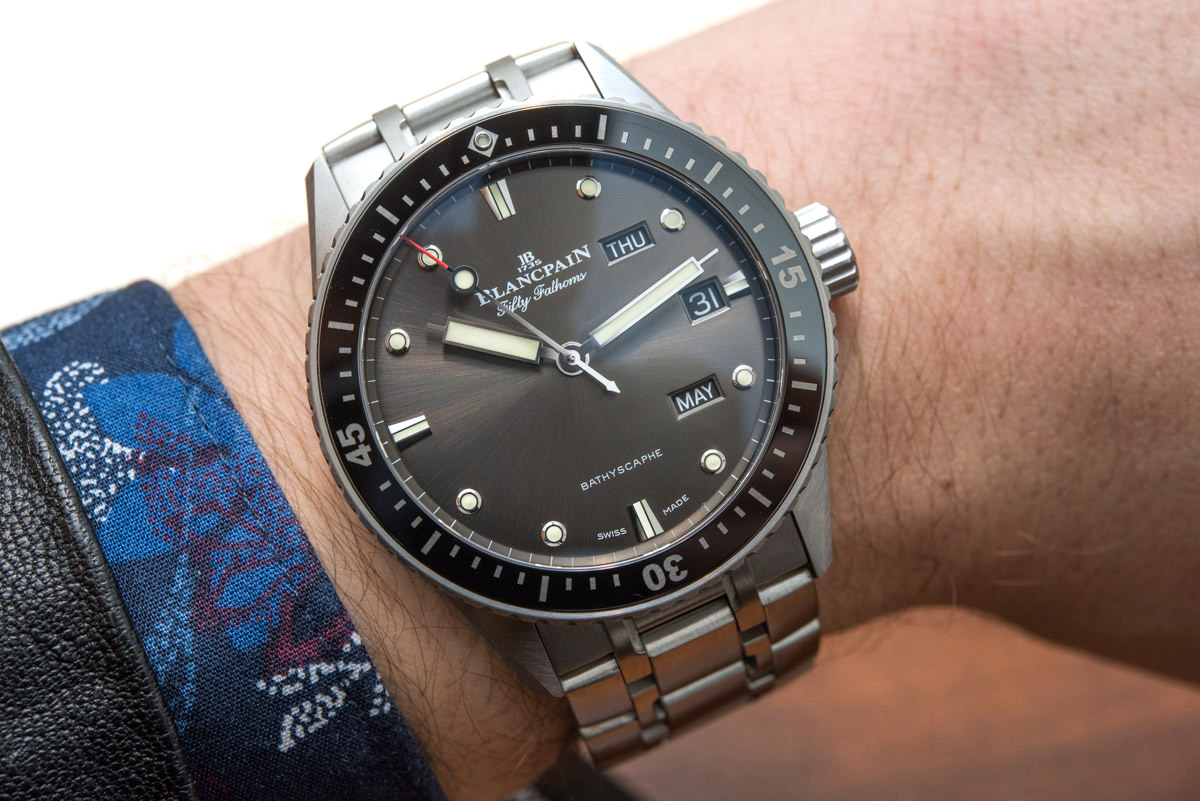 Don’t get me wrong, I can sympathize with Blancpain’s struggle of running out of Bathyscaphe-permutations, and the annual calendar with triple indications is certainly something that was never done – but maybe that was for a reason. I mean, if you are the sort of business guy who’s going to wear a big arse dive watch all year round, are you really in the 0.00001% of the sort who’s been counting the days until you could wear a dive watch and know what day of the week it is? And do so for… $xx,xxx – I almost told you the price there, but nah, I’ll maintain the suspense! 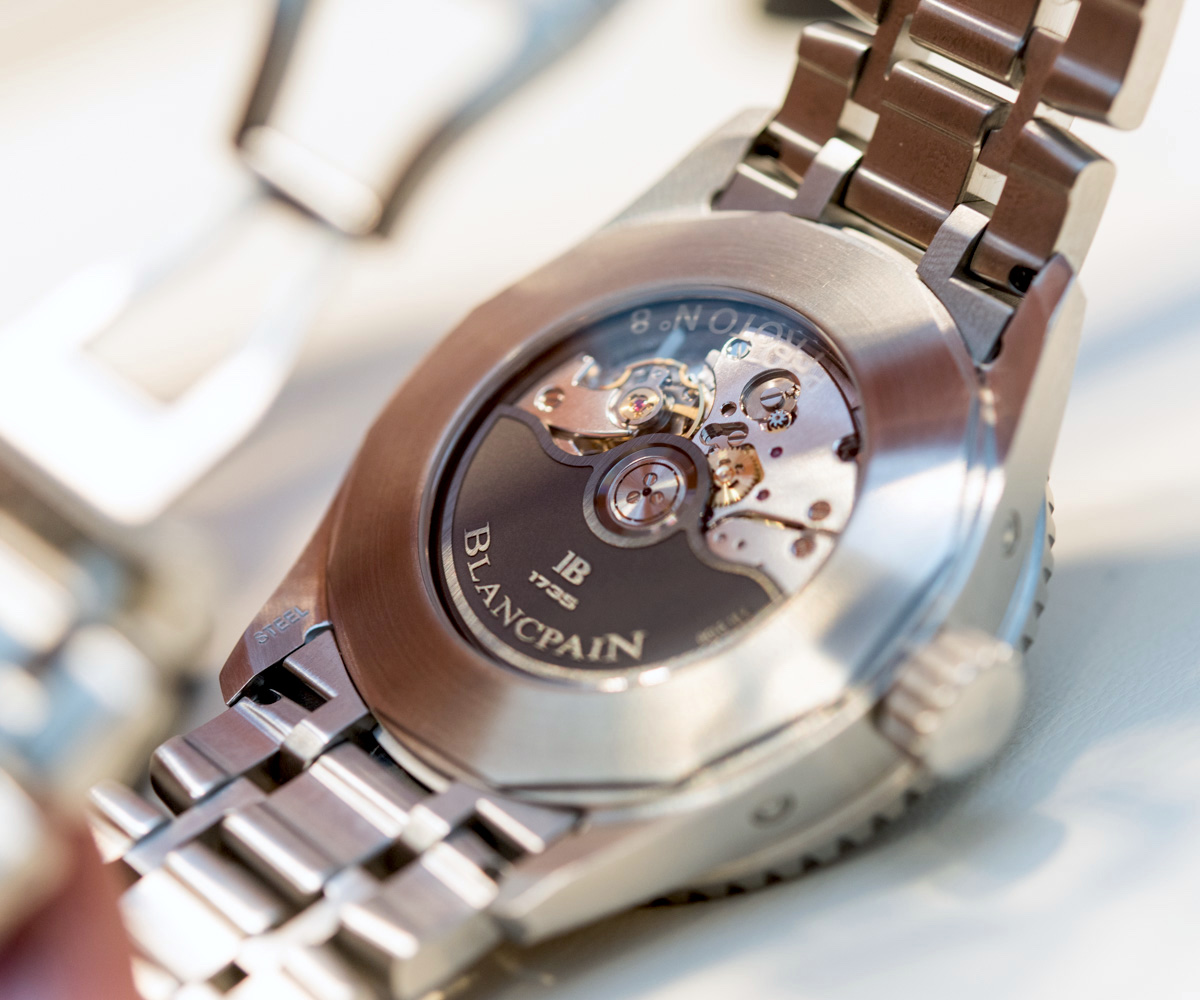 Clearly, a quirky, luxurious diver like this is not the sort of watch that had been sorely missing an annual calendar – or, often, even a date, for that matter. So, should we open our minds and look at it in another way? Is this a tour de force, perhaps? I mean, we have seen Blancpain do some genuinely mind-boggling stuff, just look at this metiers d’art piece or this daftly named L-Evolution tourbillon-carousel… Not to mention the fact that they have launched a dress watch with this exact same annual calendar layout and that this Bathyscaphe also has the annual calendar module’s not exactly impressive corrector pushers. In short, there doesn’t appear to be anything technically new or cutting edge about this Bathyscaphe under its hood, so I can’t consider it an exercise that had to be done to show off something novel.