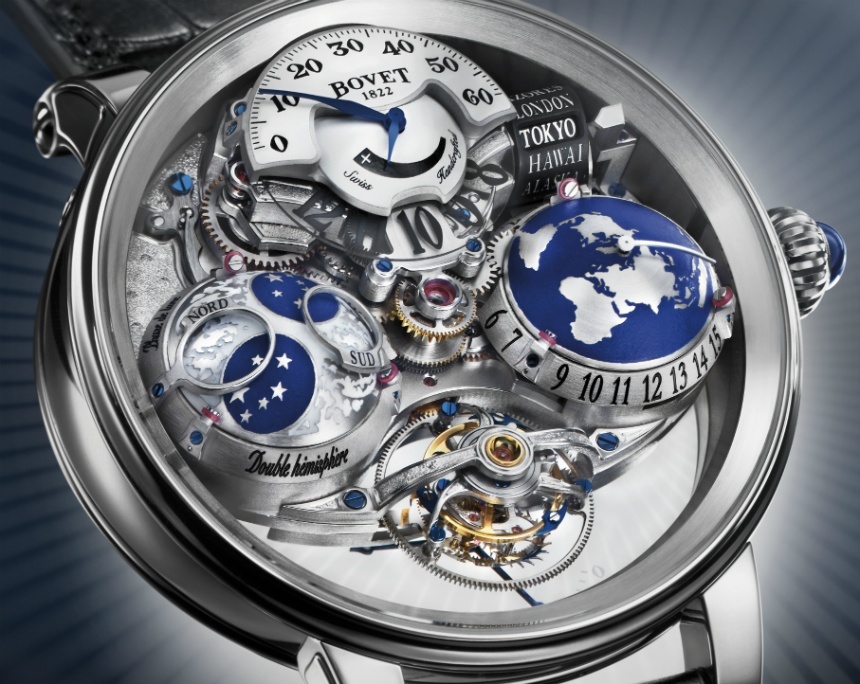 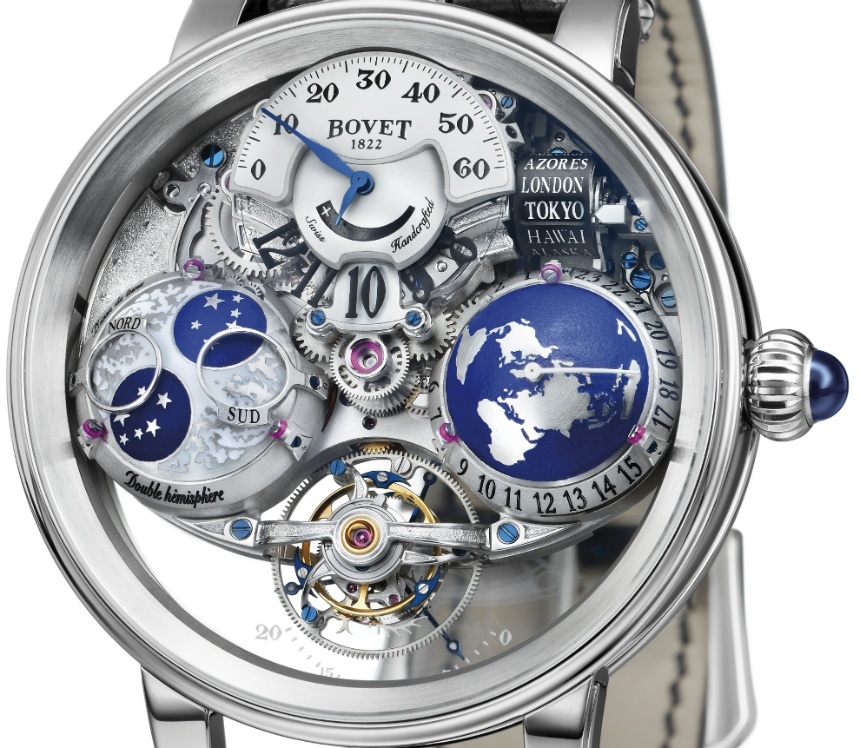 Not to be overshadowed by the watches being released by brands presenting at SIHH 2016, Bovet has released a visually impressive piece of their own. The Bovet Récital 18 Shooting Star watch is a magnificent piece of horology that is limited to only 50 pieces. Bovet releases several very high-end watches every year, and if this is is a sign of things to come for 2016, then we’re looking forward to the year ahead from Bovet.

At first glance, the world time display on the Bovet Récital 18 Shooting Star looks to be a complete globe (à la the Greubel Forsey GMT), but this is something different. Rather, Bovet commissioned a cartographer to display the entirety of the world on a hemisphere. This was done so as to be able to “see” all of the time zones, thereby being able to tell the time for any of them at once. To assign the world time, you use the crown. By depressing it, the city roller above the hemisphere springs into action, displaying the selected city.

At the same time, the hemispherical hand (something you just do not see every day) goes in 15° jumps. It’s wonderfully simple to use, but I’m sure it’s an engineering marvel. As to reading any other timezone “at a glance,” the brand explains it in the following way: starting from the North Pole (aka where the hand is mounted) draw a straight line through the region you are curious (or need to know) about, and continue until your line reaches the outer concentric ring. Bingo, you have the time in that region. Not as quick to read as if there had been lines engraved on the hemisphere, but for as often as you would likely be doing the imaginary line, I’ll take the clean unobstructed presentation of the globe as an acceptable tradeoff.

It is also worth calling out the cleverness involved in the city display on the Bovet Récital 18 Shooting Star. While it looks from the photos to be a single roller, the astute observer will note that, given the size of the panels, the 24 cities could not be contained in a single roller. Instead, there is a second roller inside the first; when you advance the first roller far enough, you get to a window from which you can then see the inner roller and the remaining cities. This is a fairly clever and complex solution that is controlled by a column wheel, and a great way to save space while building in the sort of details the casual observer will simply miss.

Continuing the theme of hemispheres established by the GMT time, the Bovet Récital 18 Shooting Star watch also has a moon phase indicator balancing the dial from left to right. Here, you have the phase indicated for both the northern and southern hemispheres. The way it has been accomplished may not be the most elegant (by means of rings floating over the moon hemisphere) but you cannot deny the simplicity of the execution. That simplicity hides the fact of some great accuracy, as the moon phase indication will only require adjustment every 122 years. Surprisingly for a luxury watch of this execution, luminous paint is used to great effect. For starters, the moon and sky are luminous, and the oceans on the world time hemisphere are also lumed. This is something that we do not see on these sorts of “realistic” representations of celestial bodies, and I think it was a smart addition. Once the light goes down, you won’t be able to see the details on the dial, so you get a different sort of a show. 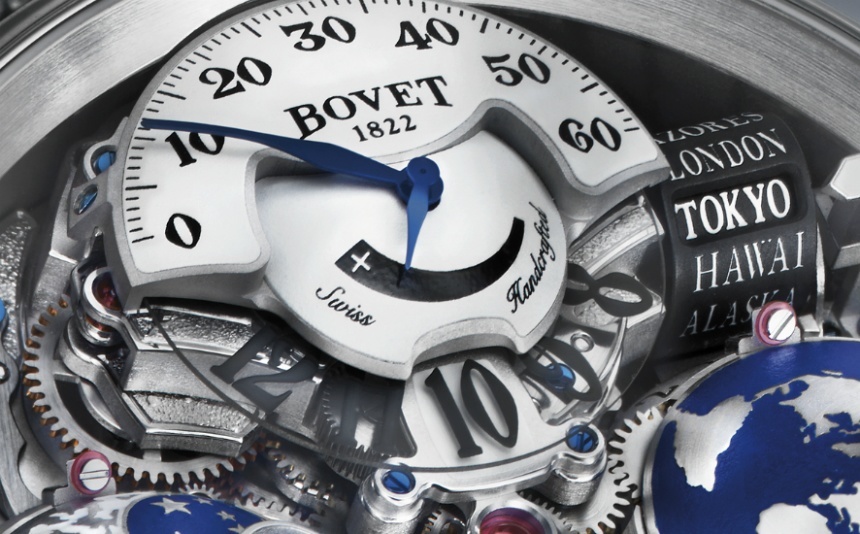 Speaking of viewing things, I realize that I have not even covered the most important aspect of a watch – telling the time. This is, of course, something that the Bovet Récital 18 Shooting Star can do, and it is done up at the 12 o’clock position on the dial, with the minutes indicated on the retrograde scale, with a digital jump hour (printed on a sapphire disc) calls out the hours. In between the hours and minutes, you have another hemisphere showing up; this is where the power reserve is indicated – power reserve of 5 days, no less.

There is one more hemisphere showing up in the Bovet Récital 18 Shooting Star, and this one is a bit more implied. This is where the tourbillon is (down at the 6 o’clock position), the hemisphere indicated by the support structure for the whirlwind cage. The tourbillon runs at 21,600 vph, and has some rather delicate decoration of its own, with the carriage and tourbillon cage being hand-engraved. This complements all of the other hand-engraving that is done throughout the Bovet Récital 18 Shooting Star (the stars, the city names, and so on). 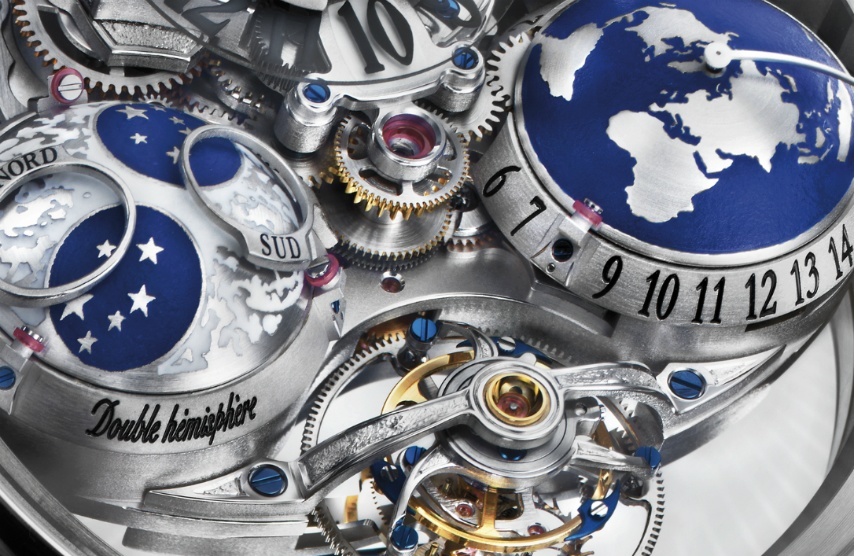 While I have only called out the four most-visible domes, or hemispheres, of the Bovet Récital 18 Shooting Star, the brand counts a total of seven, including the sapphire crystal and dials. some of these are more subtle than others, to be sure, but they are there. In the midst of all the other “gee whiz” features (world time, moon phase, tourbillon, jump hour, and so on) I like seeing this sort of focus on detail, with a recurring theme that is so well-executed that you can notice (and appreciate) it, without it clobbering you over the head with how clever it’s being.

If you could not tell, the Bovet Récital 18 Shooting Star has a lot to like, at least in my book. Of course, when you develop something like this, and hide some rather intricate engineering behind a facade of simplicity, you know that this will not be an impulse purchase. It is anticipated that the Bovet Récital 18 Shooting Star will carry a price tag of 295,000 CHF (in either red or white gold), with the edition limited to just 50 examples. In other words, not a watch I expect to see on my wrist (or that of anyone I know), but these sorts of exercises show what can be done without become overwrought examples of excess. bovet.com