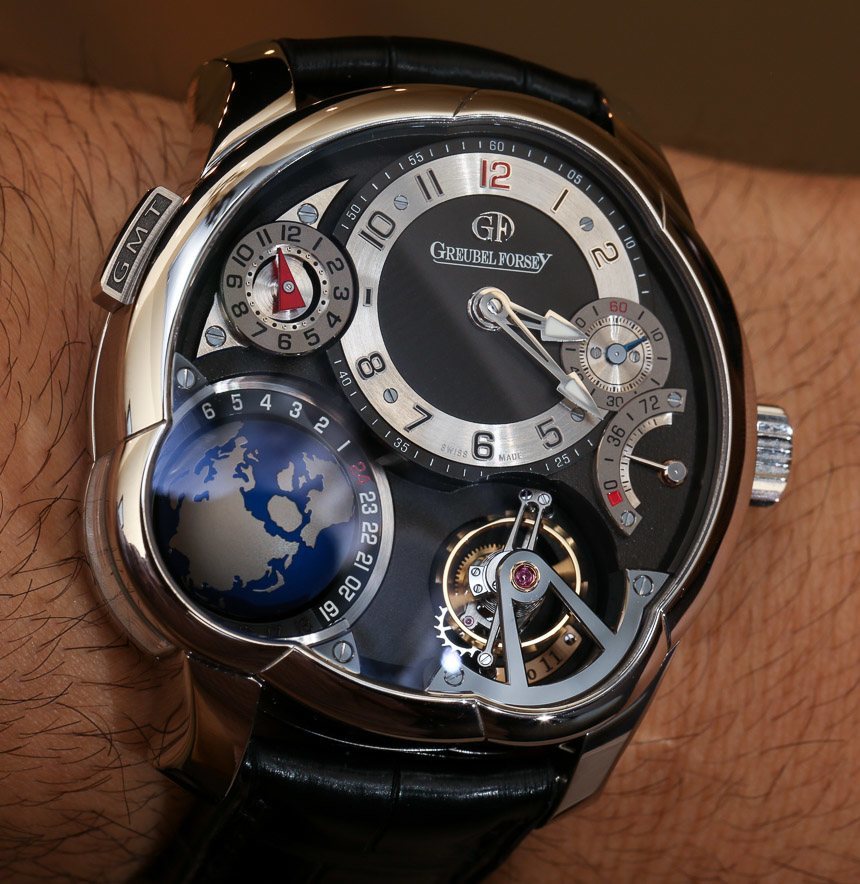 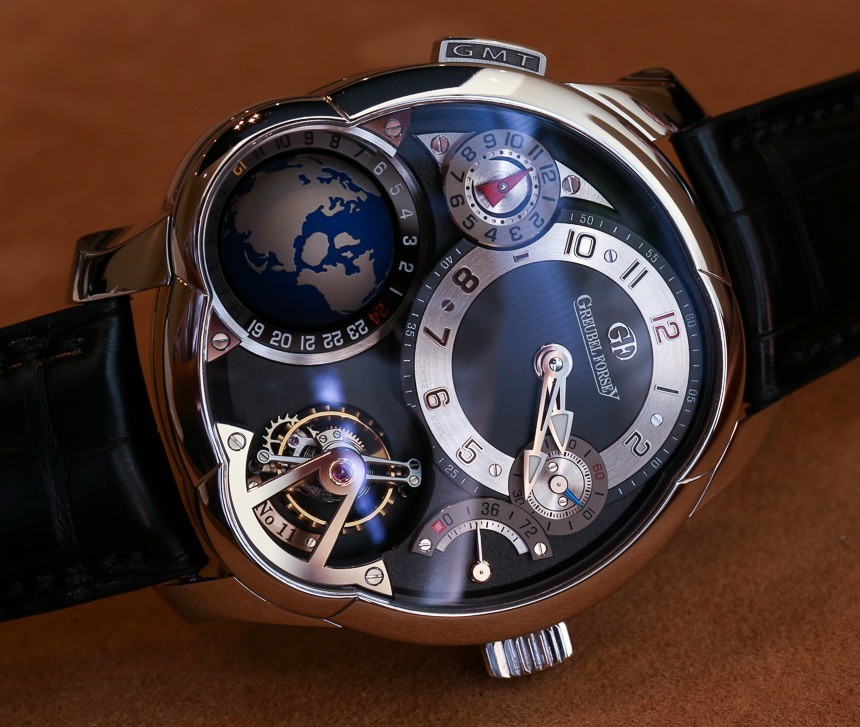 For 2014, the Swiss watch maker Greubel Forsey has released this new version of their humbly named GMT timepiece, in platinum with a black-toned dial. The tendency is often for brands to title their most expensive watches lavishly. Like aristocratic indicators of old, it is almost surprising that this timepiece with its intense level of luxurious finishing and a price that is well north of half a millions dollars has a name comprised of just three letters.

At 43.50mm wide with a case that is… mostly round in platinum, the GMT is a serious statement on the wrist. In fact, all Greubel Forsey watches are wrist statements, but the good thing is that the brand certainly backs up their promise with a product no one else seems to be able to offer. The 16.14mm thick case features a wonderful amount of hand-finishing for the platinum, and is actually quite convenient as a travel watch with two time zones. Practical? Not so much. 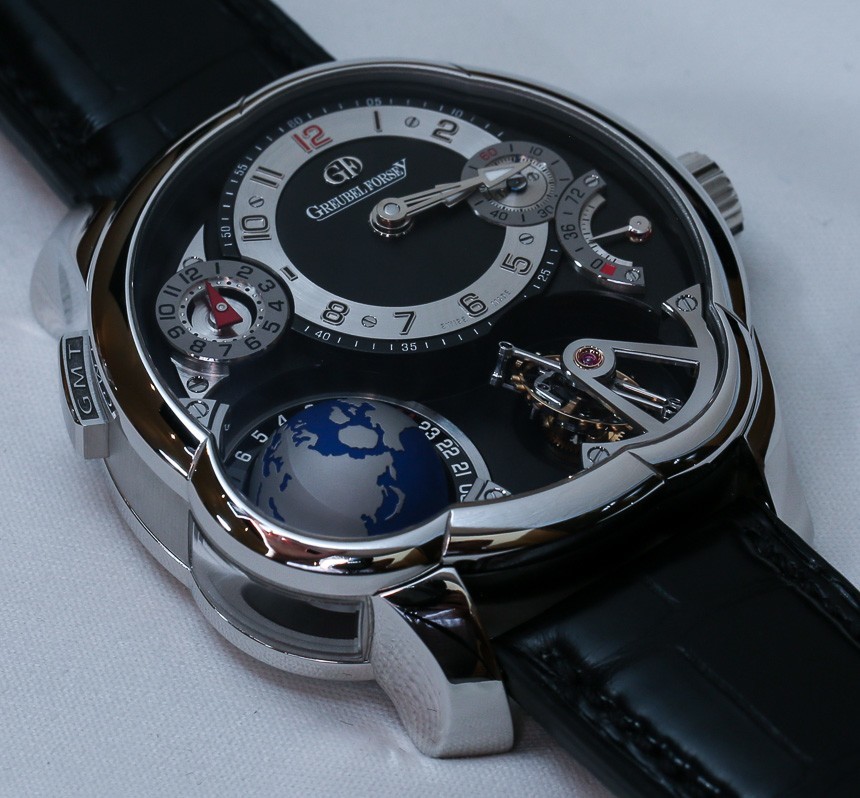 The entire point of the GMT is to take the concept of a Greubel Forsey and add a 24 hour second time zone indicator to it–in addition to some manner of fancy tourbillon. That indicator takes the form of a globe–as viewed top down from the North Pole–that spins once each 24 hours. The 24 hour scale helps the globe, which is crafted from titanium, to further act as sort of world time indicator. If you don’t feel that being able to indicate the time in other parts of the world is all that easy from looking at the charming little globe, then all you need to do is turn the watch around.

On the rear of the case the GMT indicator appears as a full fledged world time disc with reference cities that indicate the time in each of the 24 time zones. There is even a center disc that is there to indicate “summer time” when daylight saving (DST) is not in effect. It is very convenient to have the full world time disc, though it is a bit strange to have to take the watch off in order to inspect it. Then again, there is plenty to look at on the dial side. 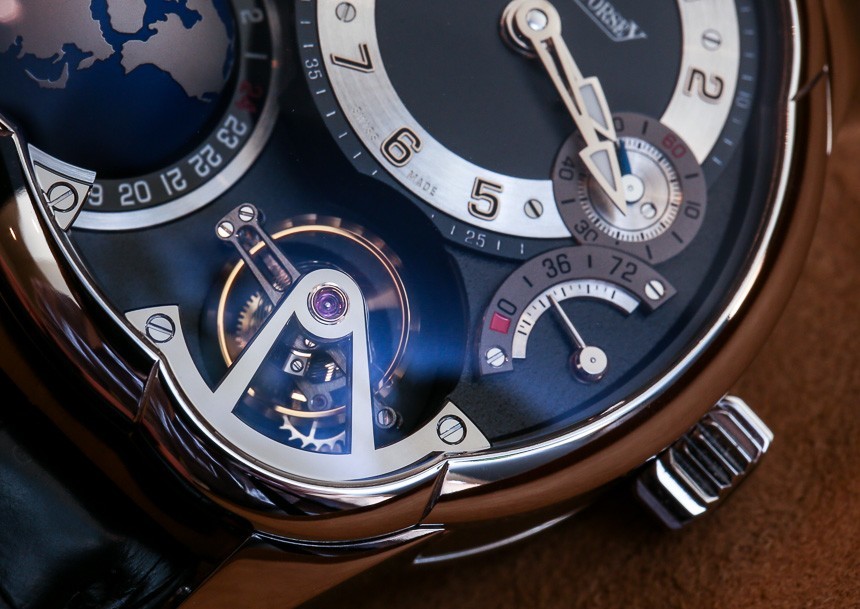 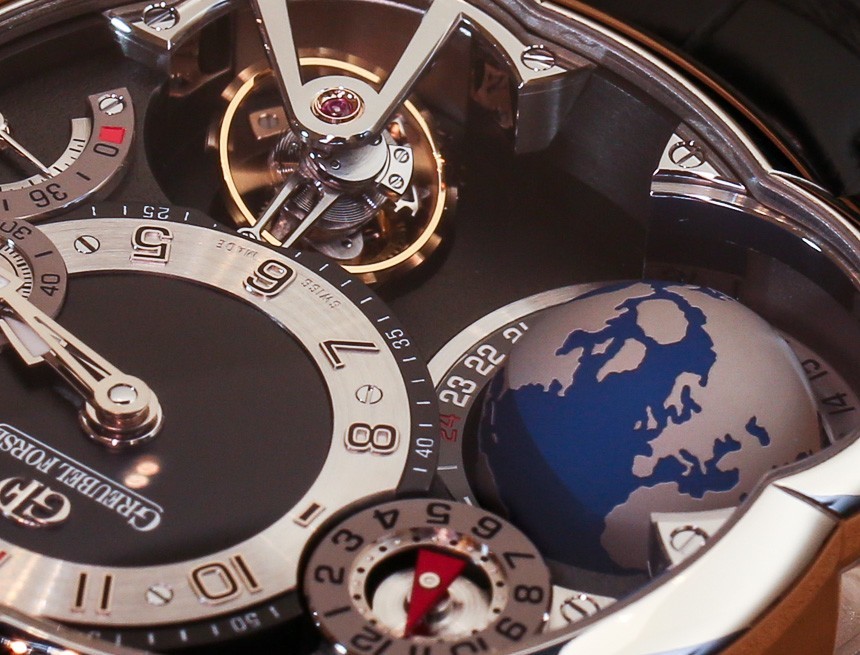 In addition to the 24 hour disc/globe, there is a second timezone hand which makes reading an additional time zone easy. Right above the globe is an independent hour hand which acts as a second time zone indicator in a 12 hour format. A pusher to the left of the dial is used to quickly adjust the hour for use while traveling. So basically, the Greubel Forsey GMT watch combines both a world time function as well as a second time zone. In the traditional sense it actually doesn’t have a GMT hand, which is sort of ironic.

Of course the in-house made and designed Greubel Forsey calibre GF05 doesn’t stop there. It also displays the main time via a clear, off-centered dial on the face, as well as a subsidiary seconds dial and power reserve indicator. The dial is extremely rich in detail and decoration, as well as remarkably three-dimensional. Perhaps the most pleasurable thing about a Greubel Forsey watch is merely inspecting the dial as though you are looking down into a city from the sky. This is not a painting that merely looks good when observed from afar, as the level of intense decor invites a close look at each of the finished parts. 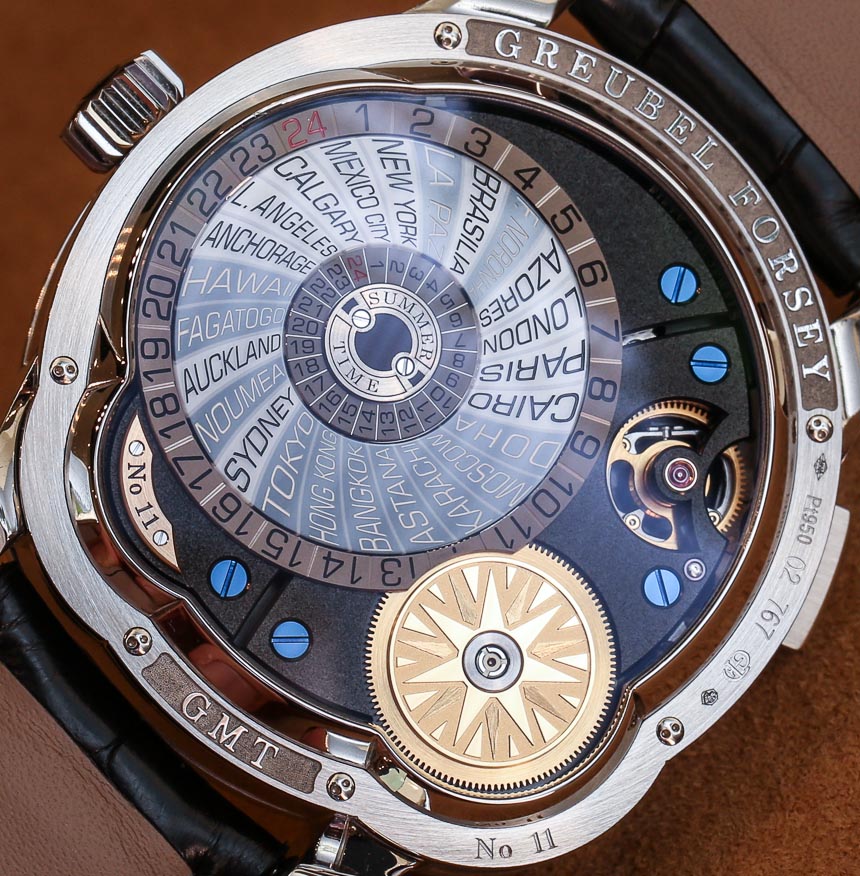