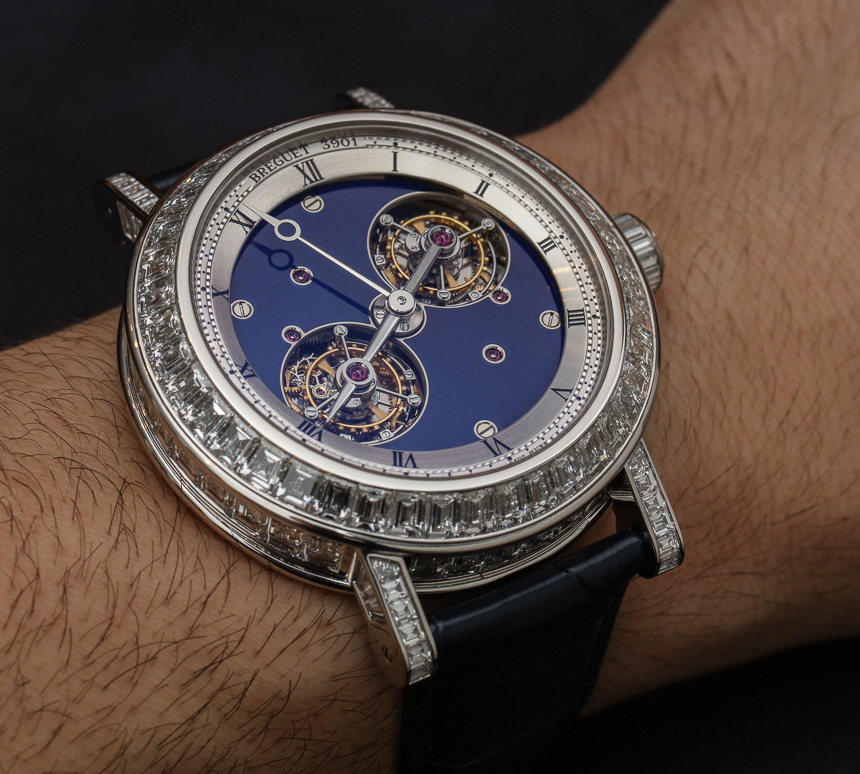 For Baselworld 2016, Breguet debuts a new chapter in their highly exclusive Double Tourbillon collection with an additional member of the Breguet Double Tourbillon 5349 timepiece family. Referred to as a “Grande Complication” by Breguet due to its double tourbillons and “orbital” dial, the 5349 is actually the bigger brother of the Breguet Double Tourbillon 5347 which is a few millimeters smaller in diameter. With a massively sized case in solid 950 platinum, over 30 carats of diamonds, and a showy, complicated movement, this is perhaps the most simple wristwatch way to become the top oligarch in your neighborhood. 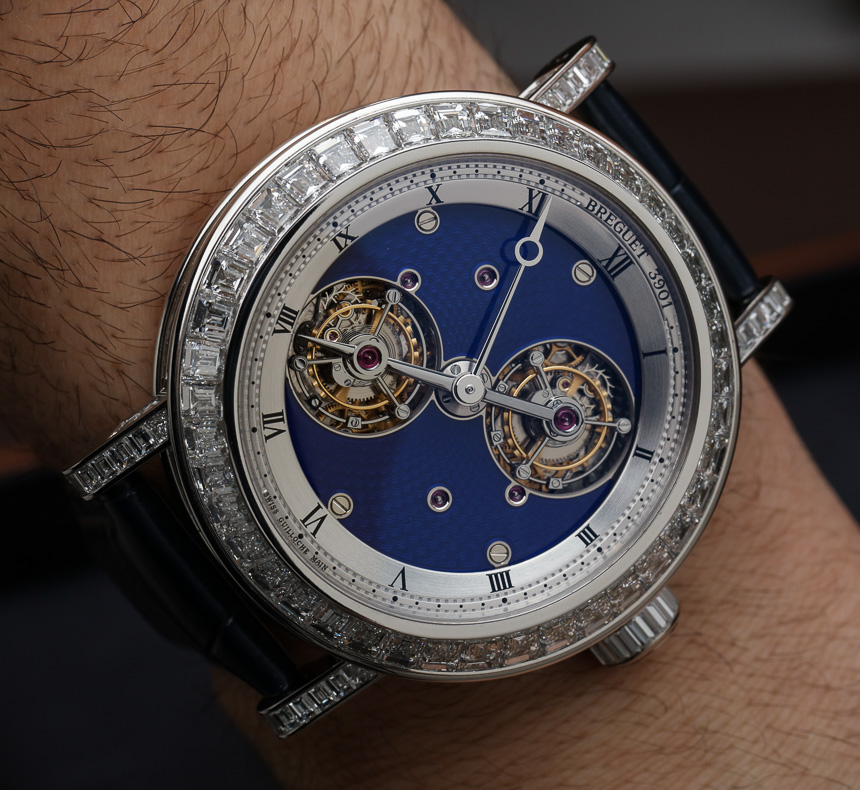 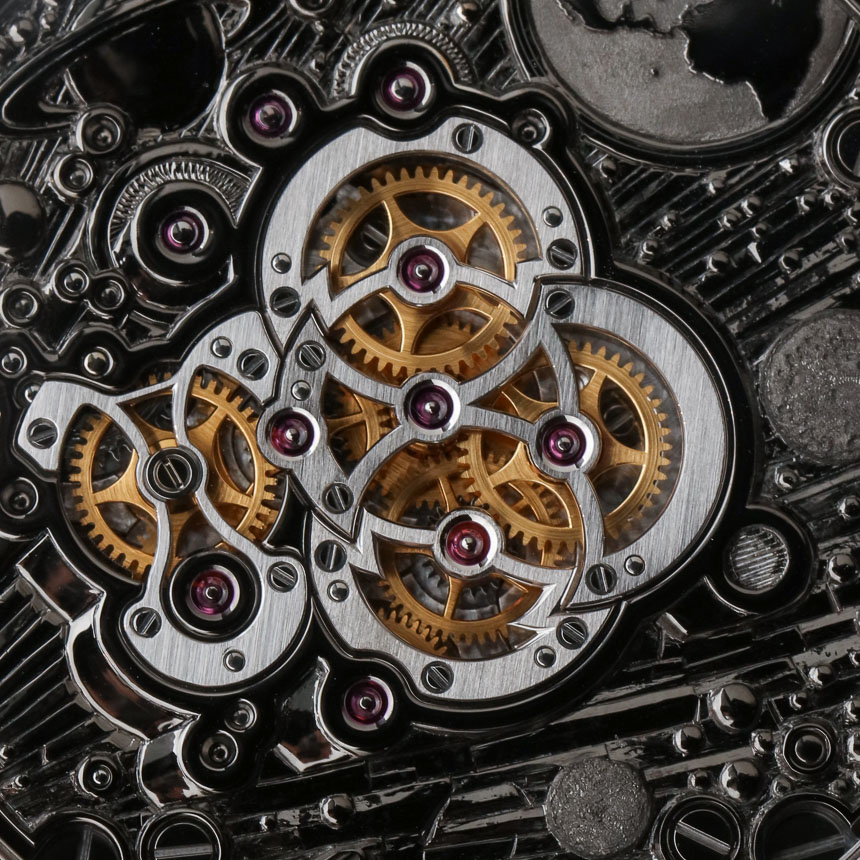 I’m in love with watches like this because they represent one extreme side of the luxury watch spectrum when it comes to patently anti-discreet means of a wearer “saying something” with their timepiece. Few people will actually have a wrist which the 50mm-wide case of the Breguet Double Tourbillon 5349 will appear proportionate on. While it is wearable, the point of the design is to look quite literally “oversized,” as though this Breguet functions as some type of a wrist-worn crown.

Breguet’s smaller 5347 watch contains the same 676-part in-house made Breguet movement, but in a 44mm- versus 50mm-wide case. The movement, which is manually wound and quite lovingly decorated with engravings, offers just the time. The dial is mostly focused on presenting the two non-flying tourbillons, one of which doubles as the hour hand. Basically, the two 60-second tourbillons are mounted to a movement which itself makes a full rotation once each 12 hours. That means the dial itself is the hour hand, with a minute hand over it. The spinning tourbillon cages act as small seconds indicators. 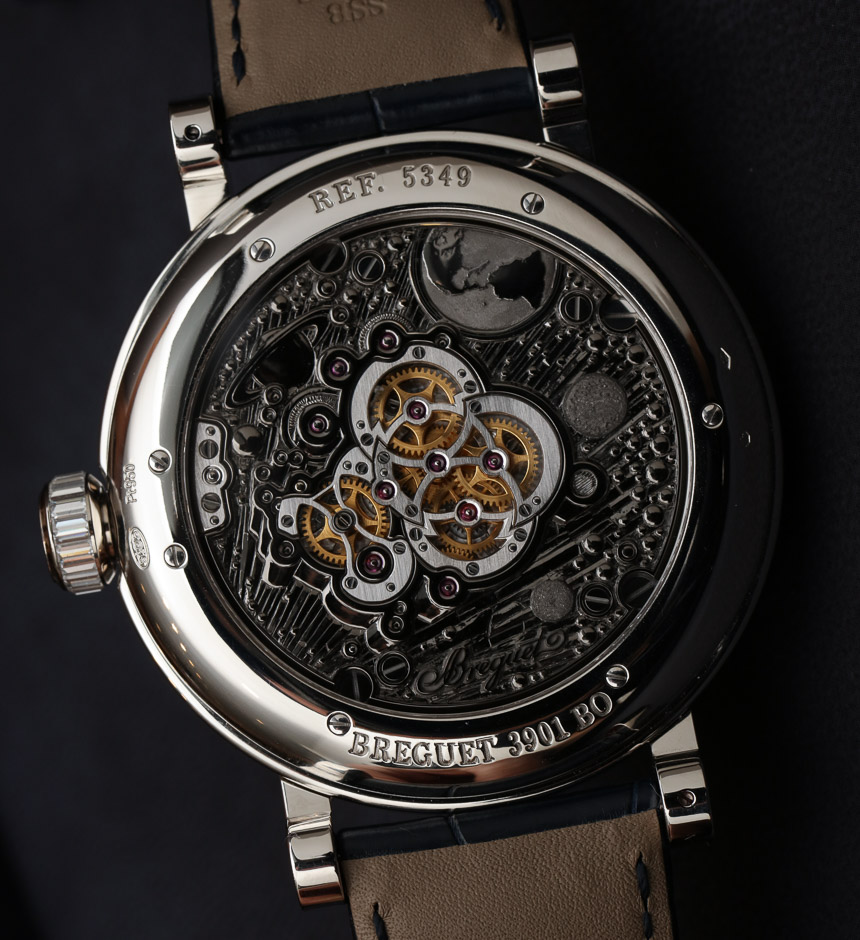 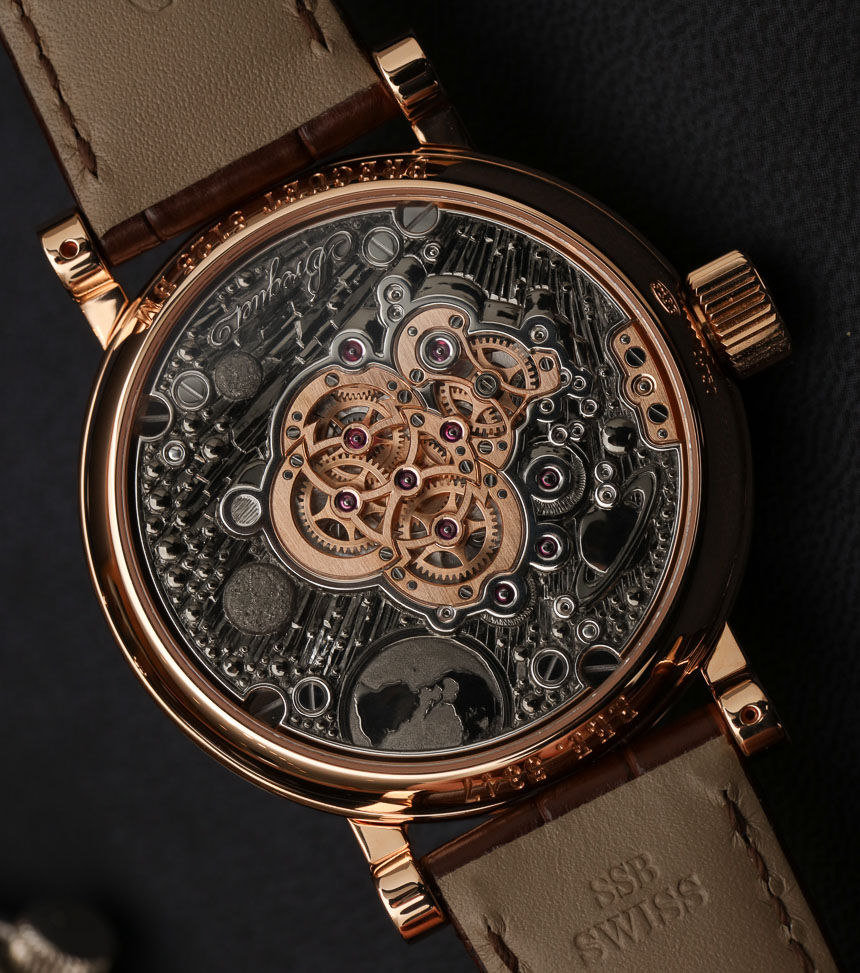 The rear of the watch shows a view of the movement’s base plate which has some stunning engravings of the night sky complete with the earth. The image makes it look like our planet sits right next to some type of nebula made up of watch gears. The quality of the imagery is fantastic. Breguet is able to make that rear plate larger to appear to take up the majority of the case in the 5347 as the plate takes up most of the case back with the gears themselves taking up less space in the center. The backplate is larger so that the movement doesn’t look small on the giant 5349 case. It isn’t even likely that showing the gears there is necessary, but this is done for aesthetic reasons to further suggest the mechanical nature of this ultra-status item. 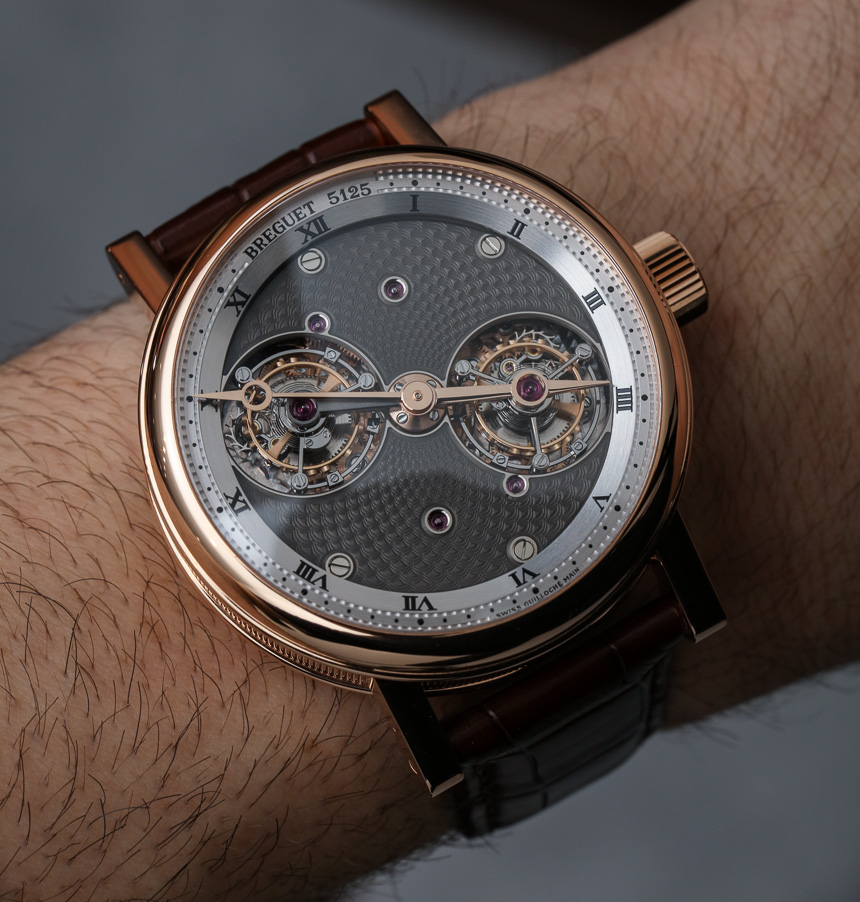 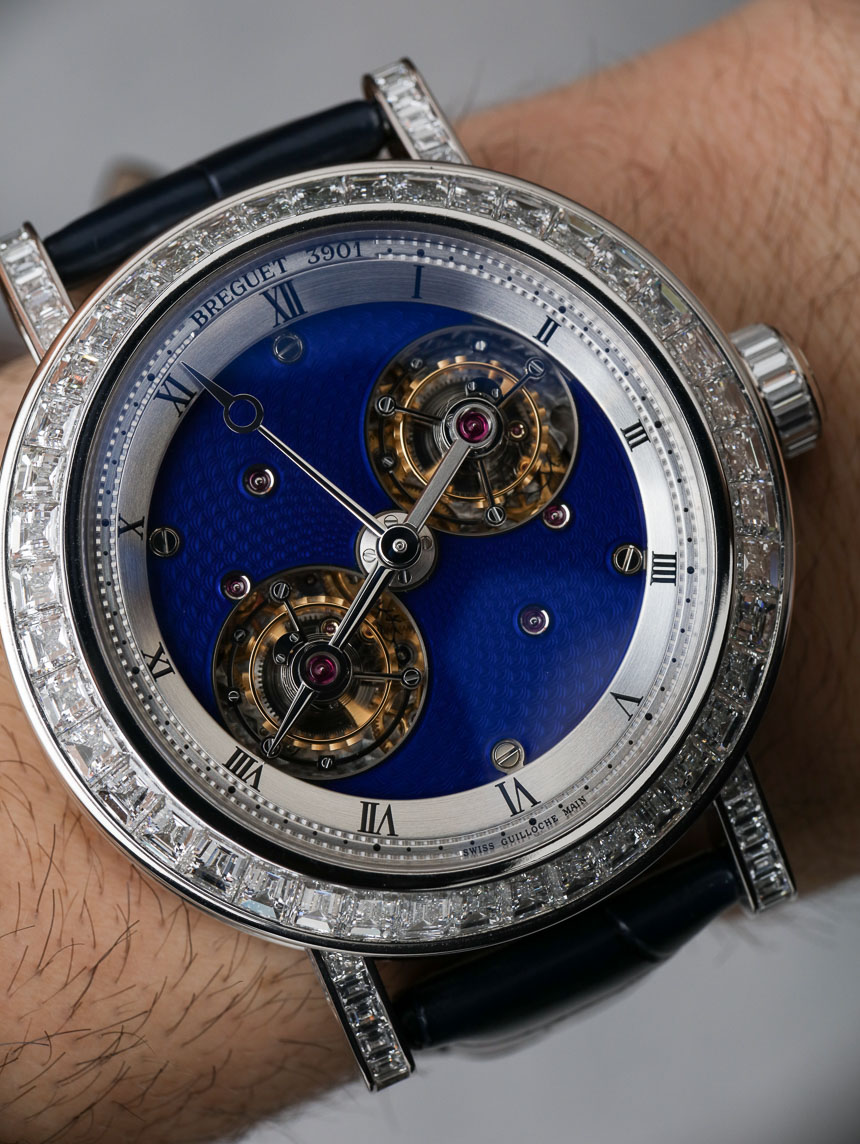 Breguet actually presented three new “on-order” Breguet Double Tourbillon watches for 2016, and each of them focuses on a hand-operated guilloche machine-engraved dial. The dials, after being machined for texture – are then enamel painted for an additional color. This Breguet Double Tourbillon 5349 has blue enamel over the dial, making for a lovely contrast, as blue always goes well with platinum and diamonds. This is also, in my most humble of opinions, a visual improvement on the all-diamond-set dial of at least one previous 5349 model.

For comparison sake, in this article you’ll see both the Breguet 5347 and the larger Breguet Double Tourbillon 5349 on my wrist. While the 5347 makes for a stately, albeit comfortable daily double tourbillon wearing experience, the Breguet Double Tourbillon 5349 is what you want on your wrist when assembling the generals. In addition to being 50mm wide, with large lugs, the case is 18.65mm thick – which isn’t that terrible, actually. On the fitted alligator strap with diamond-set Breguet folding buckle, the Breguet Double Tourbillon 5349 is able to sit snugly against your wrist. You just need to be comfortable with lugs that might stick out past the edges of your wrist. I’d be willing to deal with that size issue to experience the ongoing majesty of wearing a watch that seemingly does the impossible by speaking louder than me despite lacking a mouth of any kind. 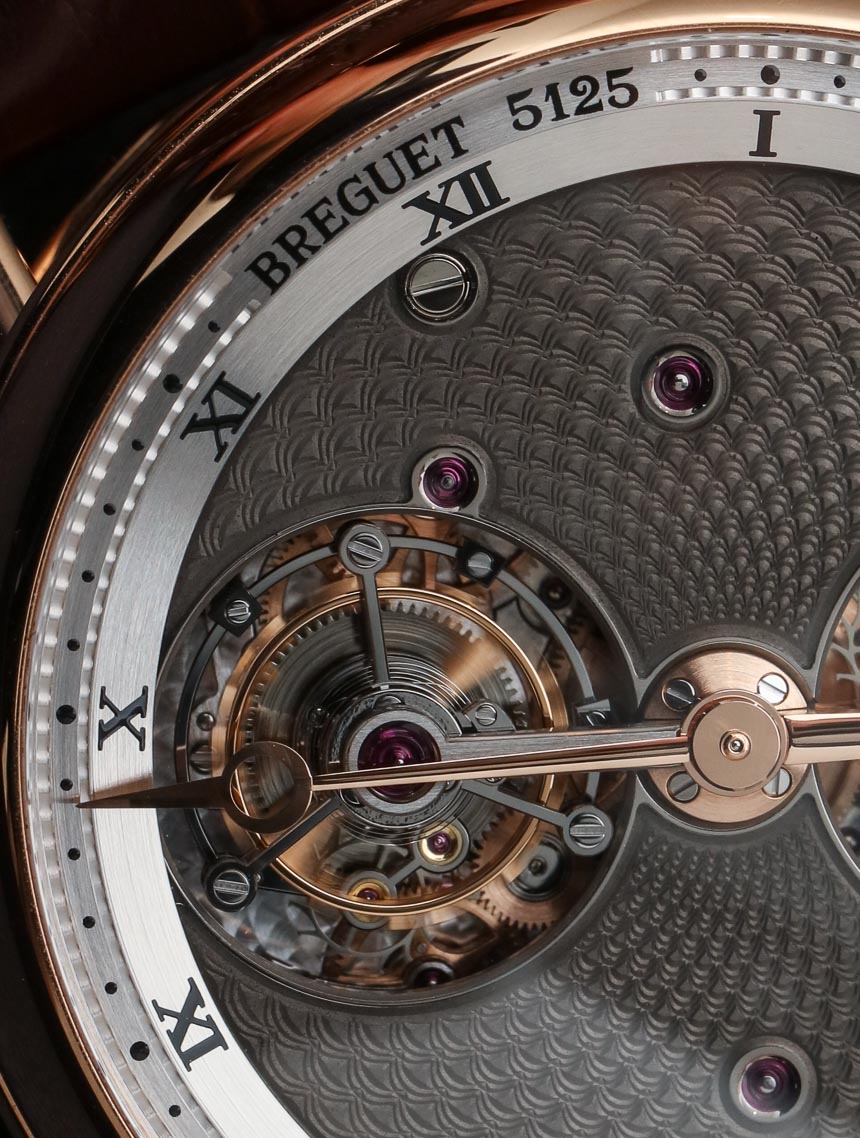 The Breguet caliber 588 movement inside the watch operates at 2.5Hz (18,000bph) with a power reserve of 50 hours. It was developed years ago when having an “orbital” double tourbillon was very impressive. Since then, other watches have graced our courts with more complicated movements and even more tourbillons, but the caliber 588 is still impressive due to its sheer presence. It’s like a comparing a giant naturally aspirated V8 engine (the 588) next to a highly tuned four-cylinder with performance enhancements (many other complicated watch movements) that might have the same power but with a small overall footprint. This is a timepiece meant to wow and move the hearts of both the wearer and those viewing the wearer.

From what I can tell, the reference 5349 Breguet Double Tourbillon simply adds on a few extra millimeters of case size to the 5347 in order to fit all the diamonds on the case. Large in size and totaling over 30 carats of stones, the Breguet Double Tourbillon 5349 case has almost 110 baguette-cut diamonds on the bezel, case, and lugs. It is certainly as masculine an execution of a pave case as you can get. No small brilliant-cut stones, just the monolithic impression of big square pieces of portable value on your wrist. 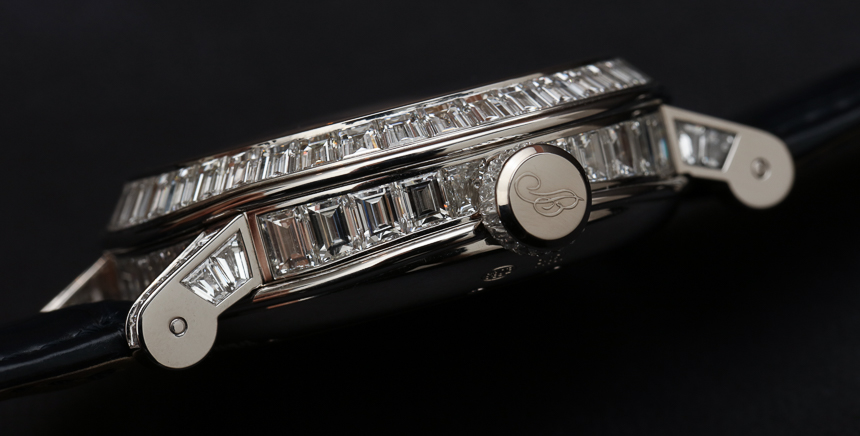 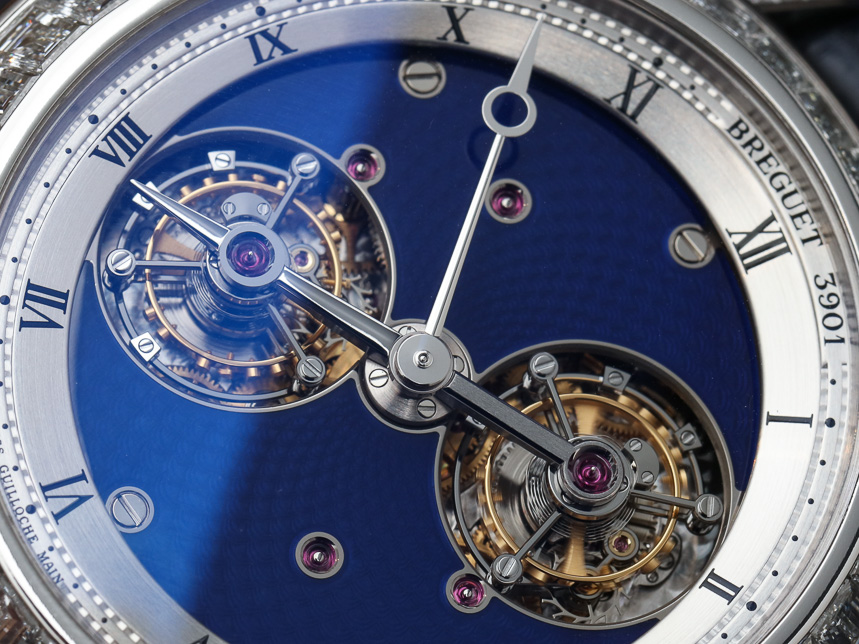 The two smaller Breguet Double Tourbillon 5347 watches in this article are new and priced at 420,000 Swiss francs for the Breguet Double Tourbillon with the translucent gray dial and 450,000 Swiss francs for the translucent red dial. Our more aptly-sized friend with stones in the solid platinum case goes up in price just a bit to 820,000 Swiss francs (a bit more in dollars). When you have the money to spend (or allocate) to a timepiece such as this, you know you’ve arrived at the point in life were people ought to listen to you (or else). Thank you, Breguet, for making me feel like a king, if but for a day. breguet.com