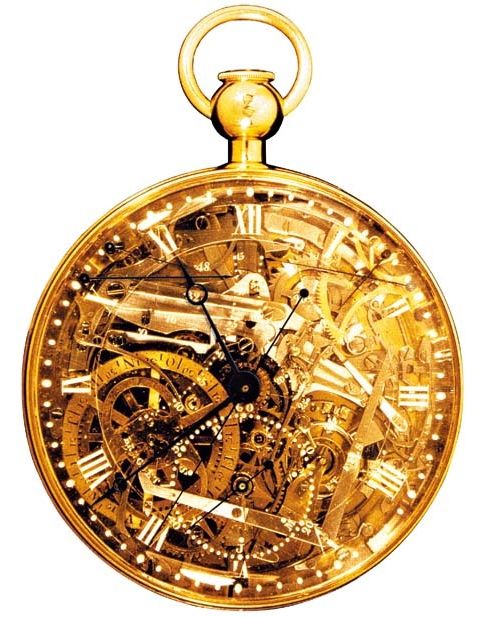 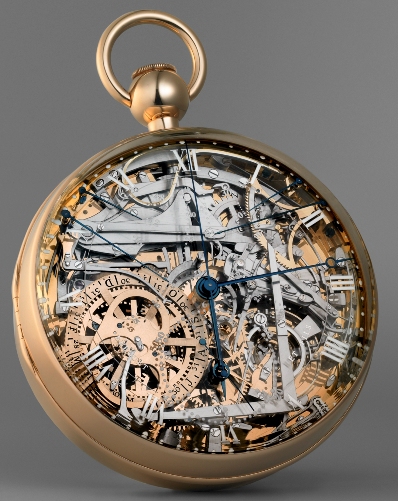 1783 France – Louis Abraham Breguet is contacted for the commission of the world’s most elegant and complicated timepiece to be handed to Queen Marie-Antoinette. A task commissioned by Count Axel de Ferson, an officer in the Queen’s high guard, and a suitor to the queen. Price and time meant nothing, “make the most spectacular watch the world has ever seen;” the noted queen’s affection for jewelry and rare items was to be outstanded. At least that was the idea. In 1793, ten years after work had begun on the Marie Antoinette Breguet pocket watch, the French Revolution took its grasp on French royalty, and Queen Marie Antoinette was beheaded at the guillotine for treason.

Work, however, did not cease on the watch. It was not until 1827 that the watch was finally completed. The result of 34 years of efforts imbuing the pocket watch with every known complication at the time. The movement was an automatic (self-winding) mechanical (obviously) movement with a 48 hour power reserve. Complications included: an on-demand minute repeater chiming on the hour, quarter hour, or each minute; an equation of time indicator (actual solar time versus clock time); full perpetual calendar; jumping hour display; bimetallic mechanical thermometer; and a bevy of internal stability and accuracy mechanisms. It was the crowning achievement for Breguet at the time, and embodied everything the defined technological achievement and the prowess of European mechanical ability. No one seemed to mind that it took so long to develop. After Queen Marie Antoinette was beheaded, there did not seem to be a rush. Once Breguet begins something, determination requires success be achieved. Only the most elite of watch lovers at the time could fully appreciate the Queen Marie Antoinette pocket watch. Almost intimidating to view, the single beautiful 63mm pocket watch moved from collector to collector over the years remaining a source of pride for Breguet. 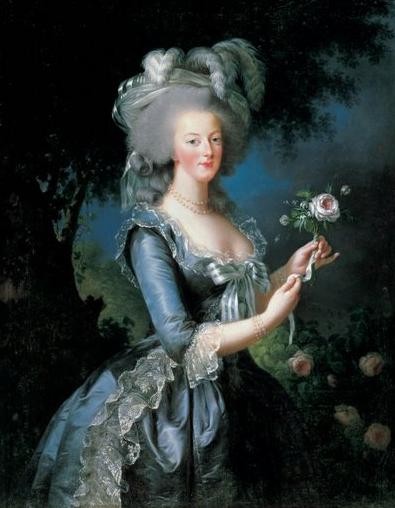 Eventually, the pocket watch made its way into the LA Mayer Islamic Art Museum in Jerusalem Israel. The museum has a wing dedicated to historical watches, many of which are Breguets. The Queen Marie Antoinette Breguet pocket watch remained on display until 1983, when it was stolen. A remarkably smooth burglary, handled like clock work managed to remove several key items at the LA Mayer Islamic Art Museum including the Marie Antoinette watch. No amount of investigation would reveal the whereabouts of the pocket watch, and it once again entered legend.

Breguet was then, and is still owned and operated by the Swatch Group. CEO Nicolas Hayek maintained a deep connection with Breguet which has a history and technological heritage like few other brands. Wanting the safe return of the Maire Antoinette pocket watch, Hayek played with the idea of offering a huge reward for information leading to its safe recovery. However, when Hayek got news that Marie Antoinette’s favorite tree in Versailles was to be cut down, he had a different idea. Negotiating with the French for 1/10 of the cut down tree, Hayek would embark on a mission to recreate the original watch exactly, using wood from the tree for the replica pocket watch’s display box.

Work began on the replica which would be known as the Breguet Grand Complication Ref. 1160 Pocket Watch in 2005. Using only diagrams, pictures, and written descriptions of the original Marie Antoinette watch, Breguet embarked on the ambitious task of recreating a legend. Use of special metals and alloys were used to produce the same colors, along with extreme efforts to maintain the dimensions and functionality. I looked as though it was to be an exact replica, as best Breguet could guess.

Little did Breguet know that they would actually be able to compare the Grand Complication Ref. 1160 with the original Marie Antoinette watch. Recently, in November of 2007, the Queen Marie Antoinette Breguet pocket watch mysteriously reappeared. A watch maker in Tel Aviv Israel came across the watch while purchasing a lot of goods. He had no idea it would be in there, but recognized it as it was stolen in Jerusalem which was less than a 2 hour drive away back in 1983. The movements and location of the watch after it was stolen are still a mystery. I could have been that the notoriety of the pocket watch made it too hard to sell, even on the black market. No one really knows. Regardless, with the original Marine Antoinette Breguet watch recovered, Breguet could now compare the original with the replica.

The Breguet Grand Complication Ref. 1160 was unveiled to the public less than two weeks ago at Basel World 2008. It is a serious monument not only to Breguet, but also to watch making in general. The complexity of the original was outstanding, but begs a question. Was watch making so advanced 200 years ago, or have we really not come that far fundamentally? The most recent advances in watch making fall in materials, design methods, and construction techniques, but complications actually remain very similar to what they were so long ago. The Breguet Grand Complication Ref. 1160 is only a testament to a legend, but also to the greater art form and expertise that is watch making.

My hope is that the original Queen Marie Antoinette Breguet pocket watch and the new Breguet Grand Complication Ref. 1160 pocket watch be on display together so that the public can appreciate both. The watches should travel from location-to-location, allowing all people to fully appreciate the art of watch making both mechanically and artistically. Read a bit more about the creation of the Breguet Grand Complication Ref. 1160 pocket watch from the Swatch Group here.