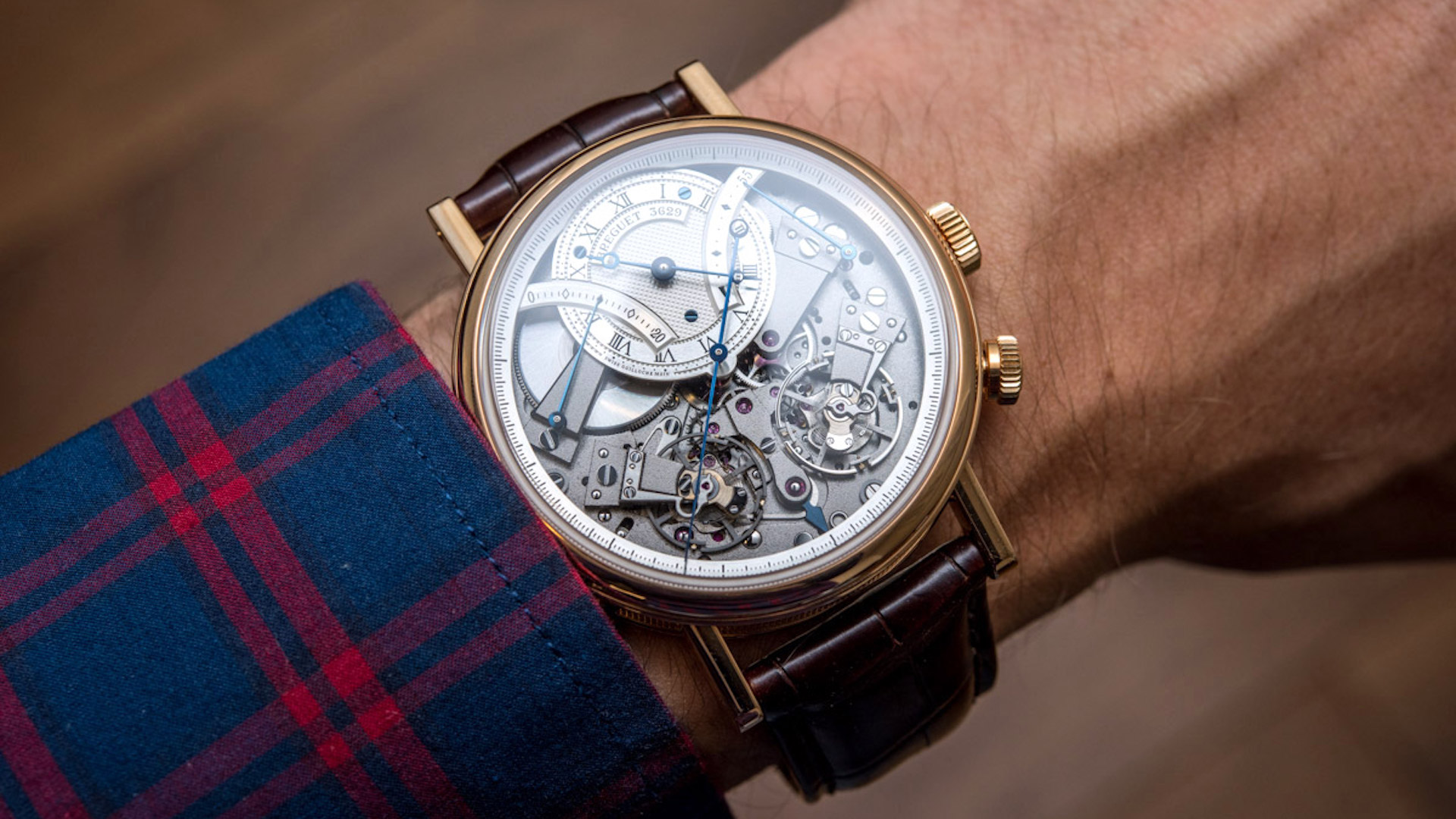 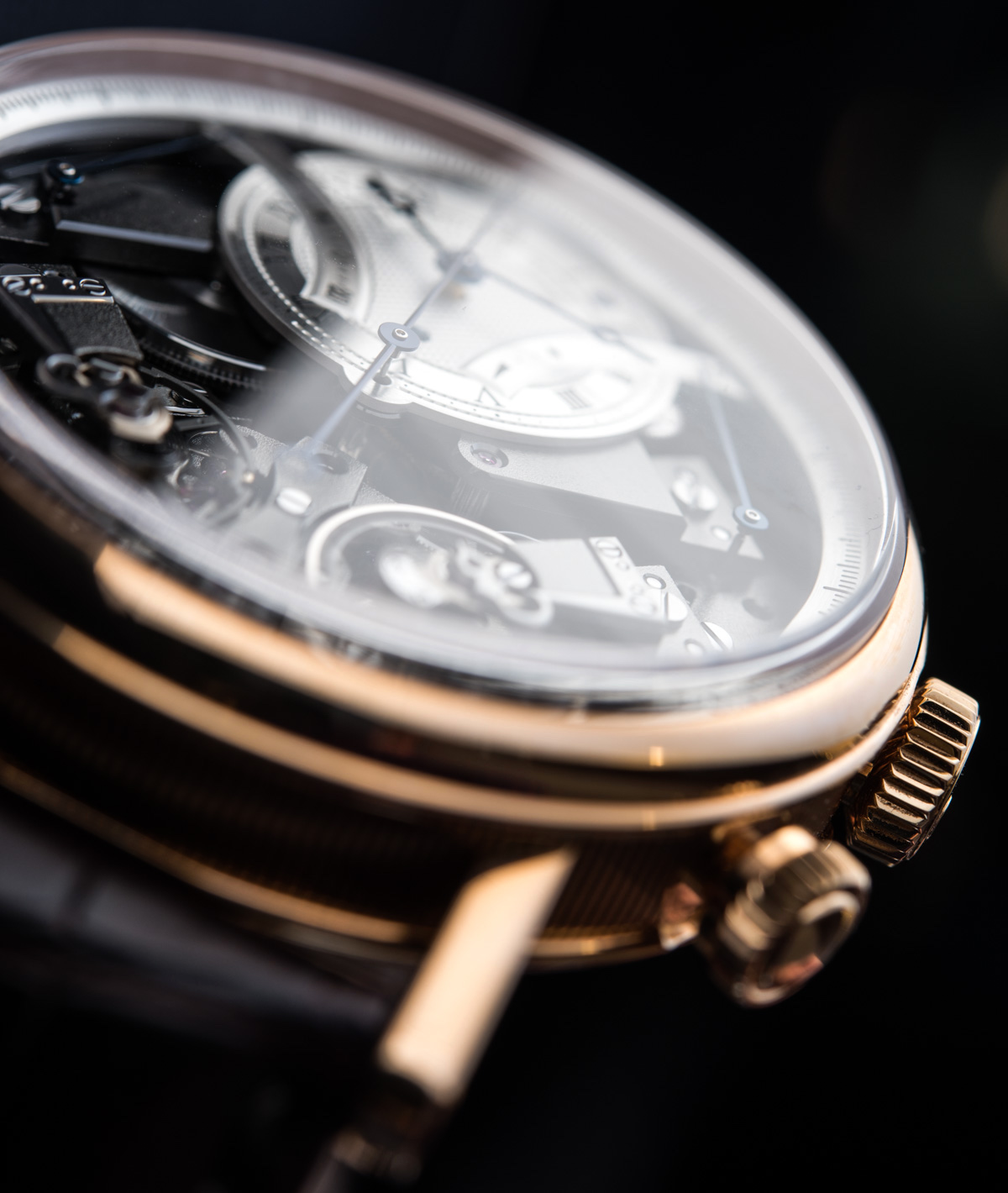 When someone asks me what my favorite watch is, I have long ago figured out the answer I can stand behind: there are so many, it changes all the time, basically. The conversation, fortunately, ends here this way – I say fortunately because this really isn’t a fair or realistic question, in my mind. That said, there are some watches that always stay near the very top on my entirely arbitrary list and the Breguet Tradition Chronographe Indépendant 7077 is definitely among the few… Which is why I’m writing about this watch after Ariel did a hands-on with it on these very pages a few years ago. Simply put, I think it’s one of the best modern watches Breguet has ever made, and here’s why that is. 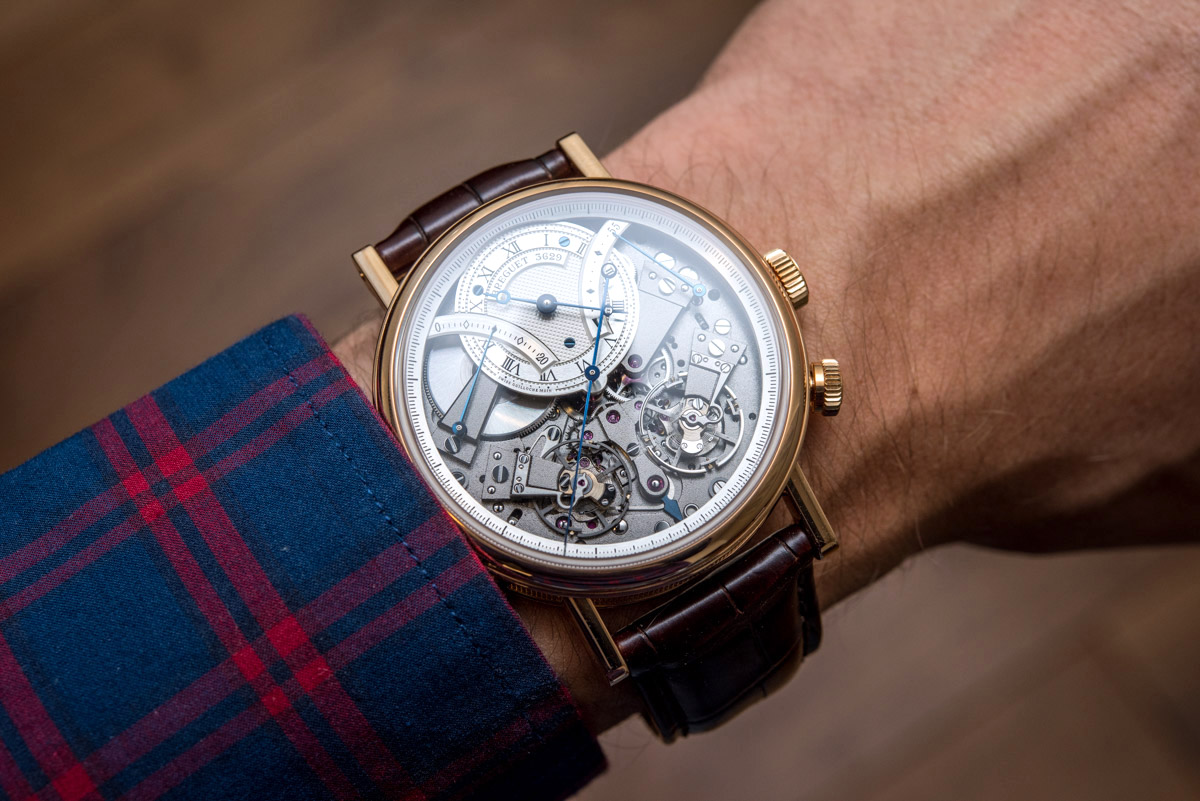 There are few brands where I genuinely care about heritage and how it is maintained today. In fact, in most cases I dread this word and its effects on modern watch brands; the absolute majority of whom were more than susceptible to falling into the cold, unrelenting grasp of their own history. The concept of WWBD, as in What Would Breguet Do still applies though – in my mind at least – to today’s Breguet. And that’s precisely because Breguet was an inventor both in the realm of fine mechanics as well as on the business side of things. 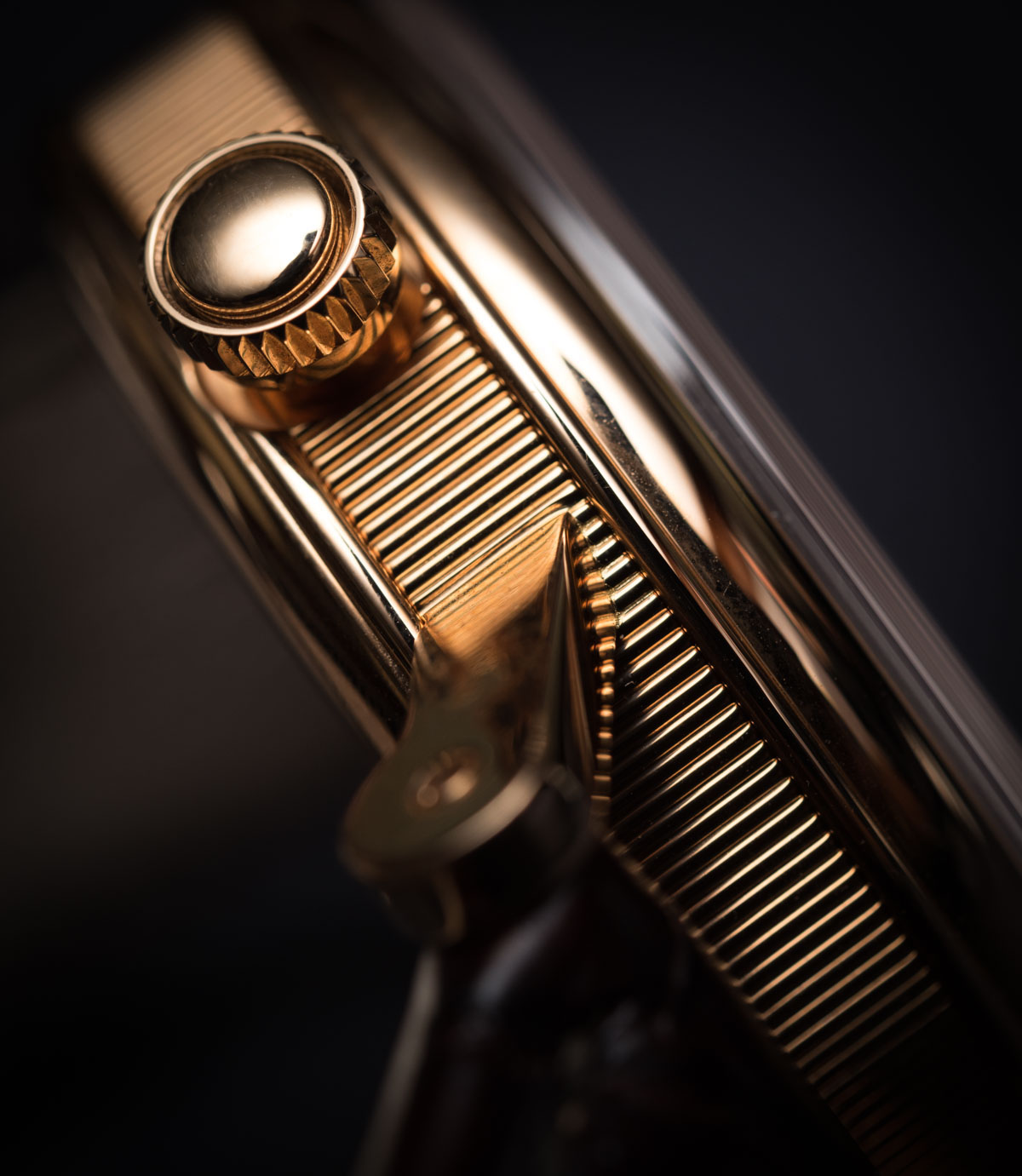 So if I say I wish the modern Breguet paid tribute to its namesake watchmaker genius, I say so precisely because that would entail a spirit of inventiveness. Fortunately for all of us, the Breguet of the 21st century in this sense is very much the Breguet of the late 18th and early 19th century. Here’s an honest, bellowing “Yay!” for that! 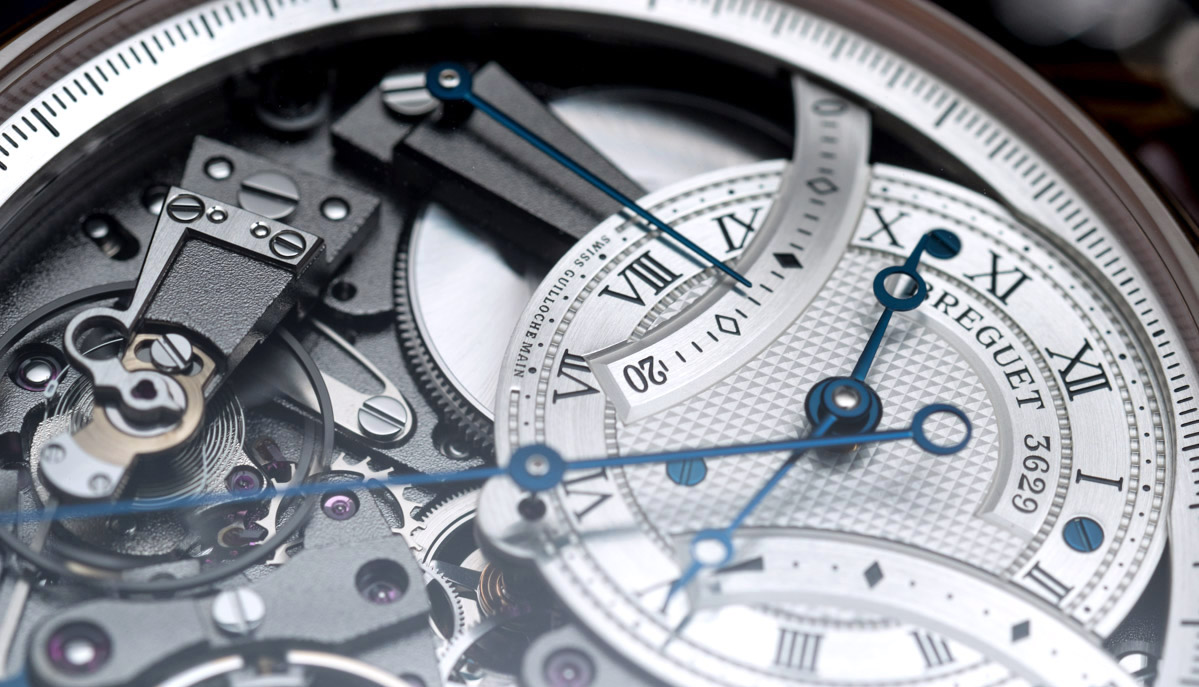 The Breguet 7077 is very much part of this heritage of being inventive while staying well within the self-imposed limitations in style of execution. I find the Marine collection to be a great idea that is still very much trying to find its place so that it appeals to a larger audience than that of Russian oligarchs. The Tradition collection has an easier job to perform, as it, by definition, is allowed to get inspiration and assistance from the elaborate and extensive tradition of the manufacturer. 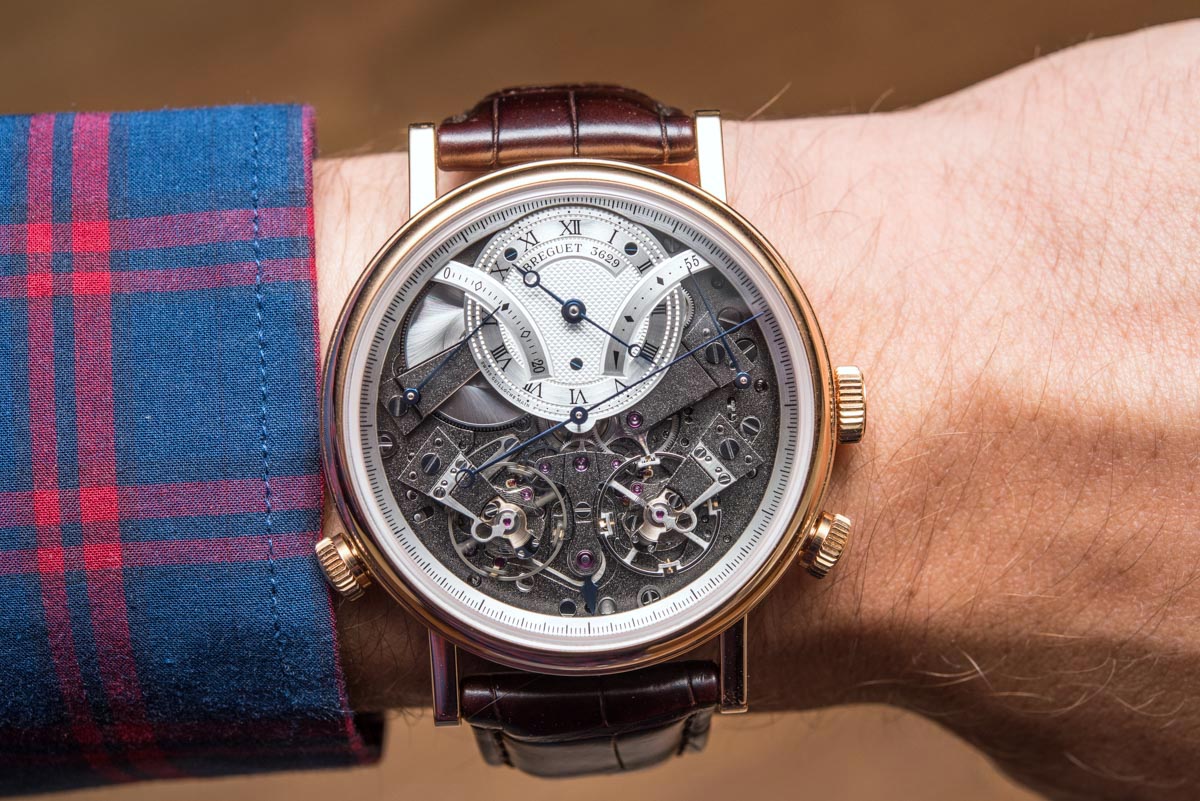 To my eyes, the Breguet Tradition Chronographe Indépendant 7077 looks all sorts of correct. I even find the sizes of its rounded elements to be proportionate to each other – meaning the case, the width of the bezel, the dial, the mainspring barrel, and the two balance wheels. The case is 44mm wide – I guess it could be smaller by that massive flange ring and come in closer to 42mm or so. But from those couple of times when I got to wear the 7077, I only remember being blown away by it and never thinking about the issue of size. It looked and felt alright on the wrist and I had to force myself to consider long-term wearability – which normally is not an issue to keep in mind. 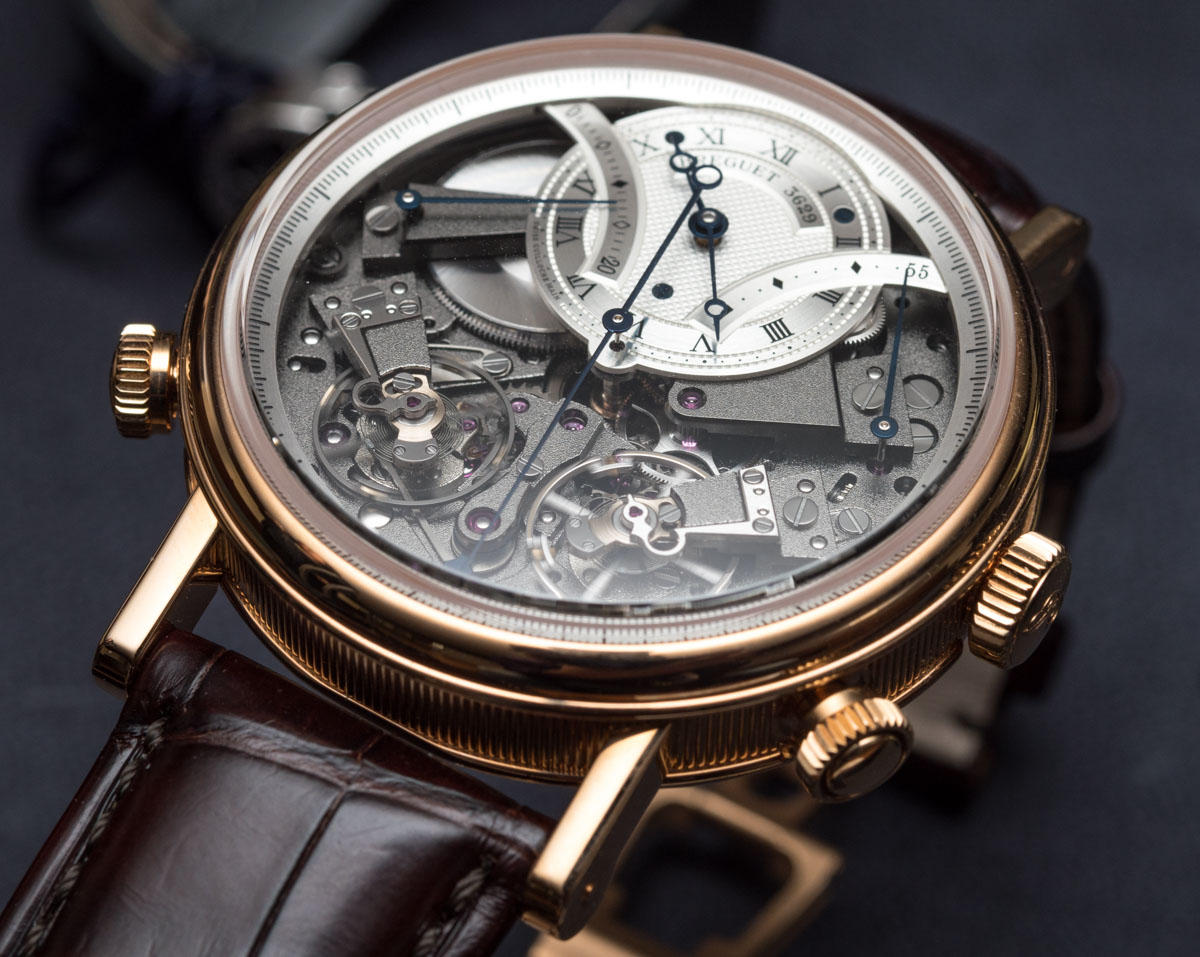 What I like about the Chronographe Indépendant 7077 is how I can look at it and reasonably think to myself this is something that Abraham-Louis would approve of, or even create himself, if he was alive today. But then I say to myself, “Nah, I think if Breguet was alive today he’d say sod all this tradition BS, let’s make a watch out of unobtainium and have its movement driven by colliding atoms.” Because, you see, Breguet, as far as I know, was never that hooked on the “beating heart of a mechanical watch” or any of that nonsense. In the late 1700s and early 1800s, he was at the rugged edge of what was technically possible to make with the manufacturing technologies of his era. 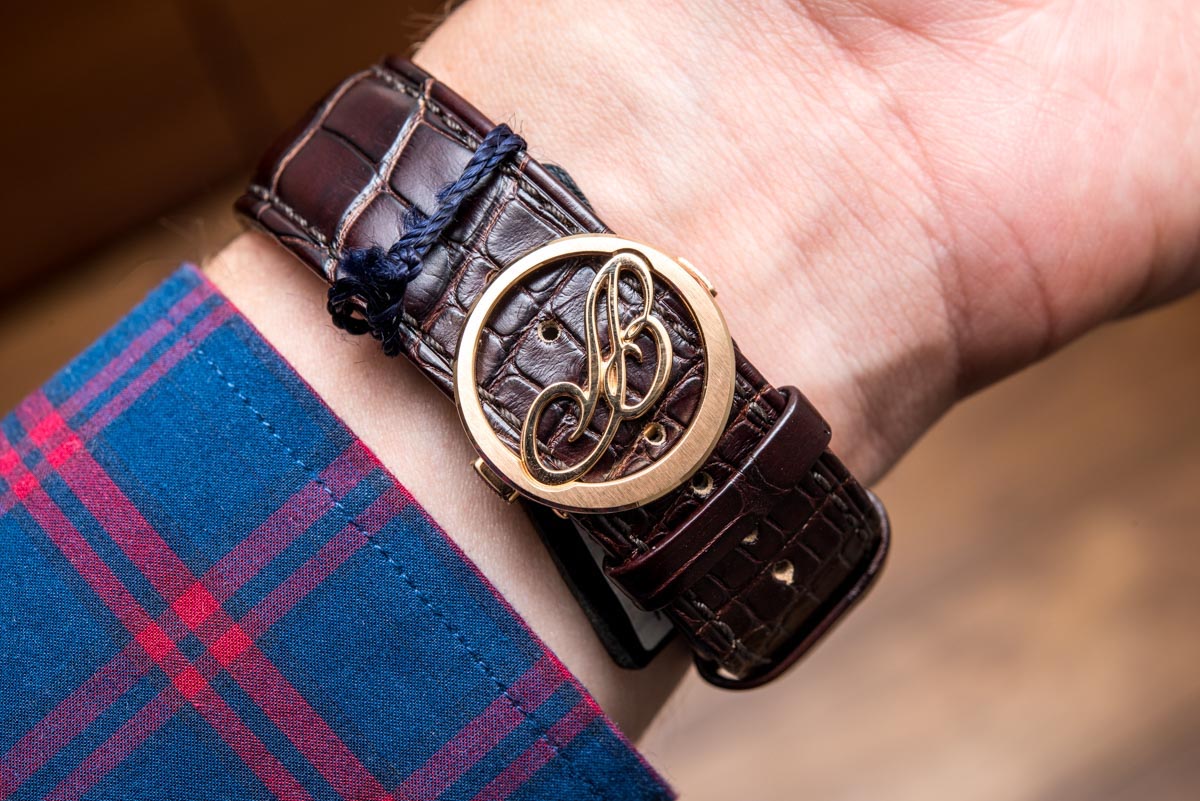 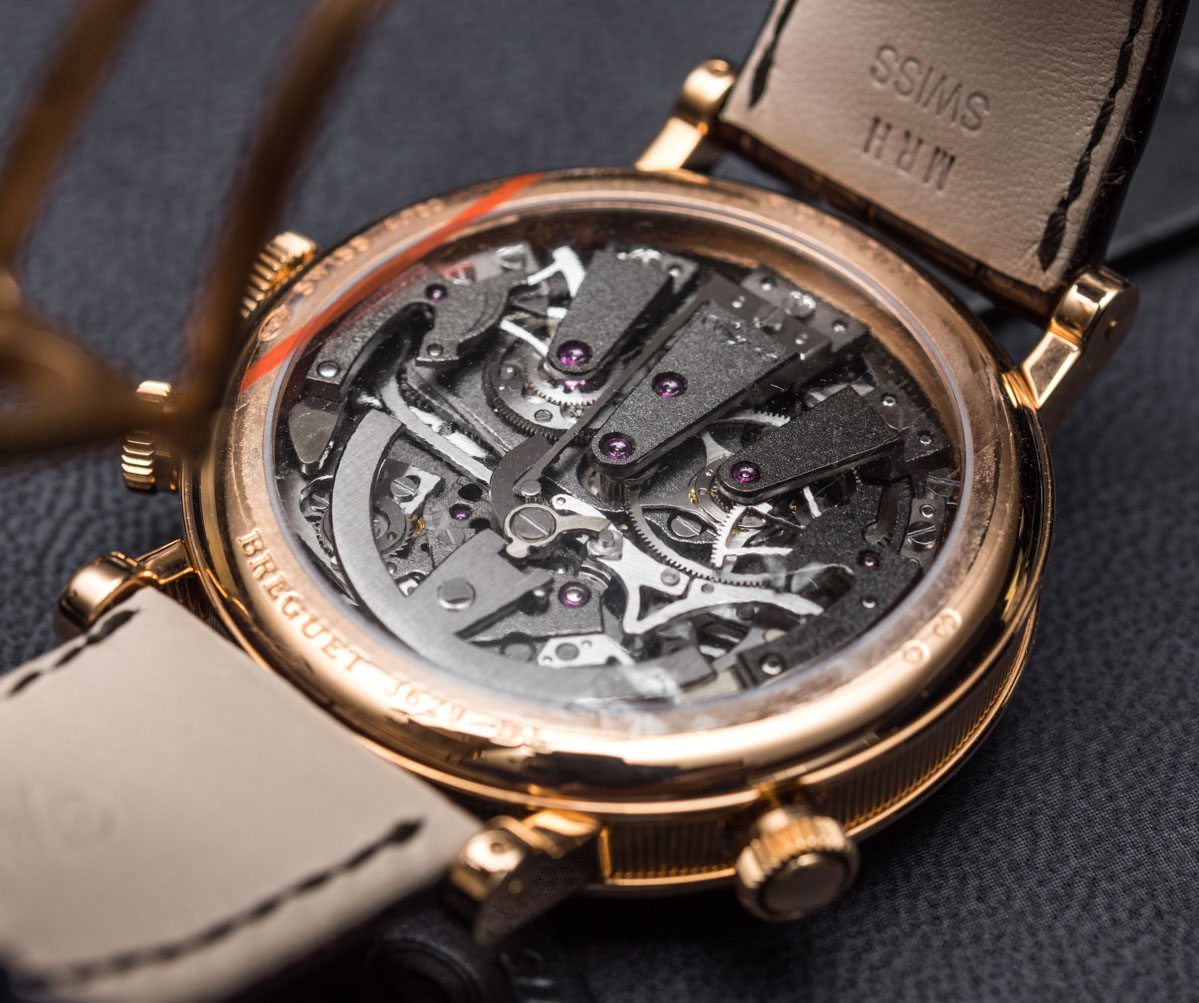 Having seen and even handled some of his original works – what a privilege – and glanced into his hand-written archives (big thanks to the Place Vendome boutique for that), I came away with an impression of a businessman and engineer, rather than a marketer or a hopeless romantic for fine mechanics. He knew how to make watches for the absolute greatest and most powerful human beings of his era just the same as he figured out a way to sell more for less – look up his “montre de Souscription,” i.e. his subscription watches.

I should add that the entire “Souscription” watch system that Breguet created was based around an easy-to-produce (by that era’s standards) movement that had only one hand, a mainspring barrel in its center, and its going train laid out neatly and cleanly around it. The entire Breguet Tradition watch collection of today is inspired by the “Souscription” watch. 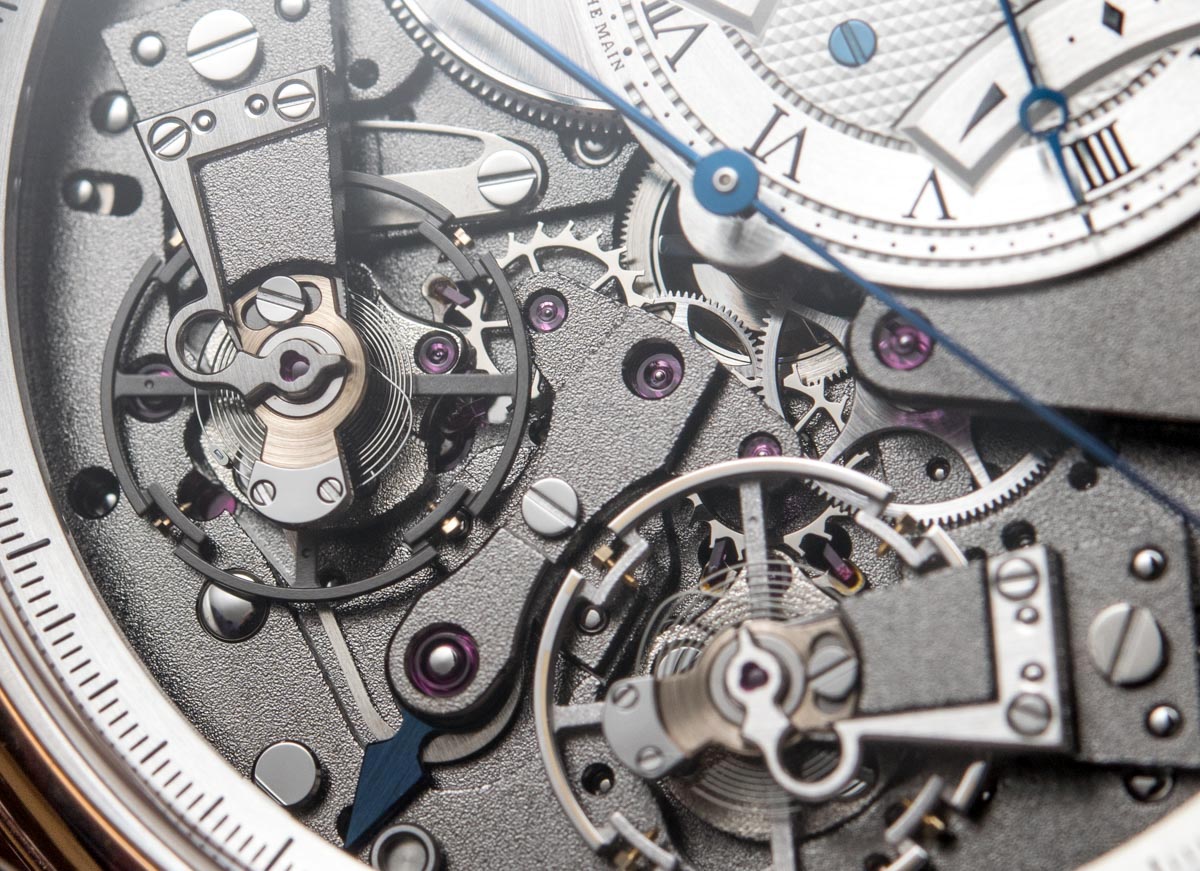 That said, because Breguet today is very much within the realm of the Swiss luxury mechanical watch industry, we cannot expect an atomic wristwatch made from jelly. And if it’s old-school mechanics we have to make do with, then the 7077 is right on the money. Called “Chronographe Indépendant,” it has two balance wheels, the one on the left for the chronograph and the one on the right for general timekeeping purposes. 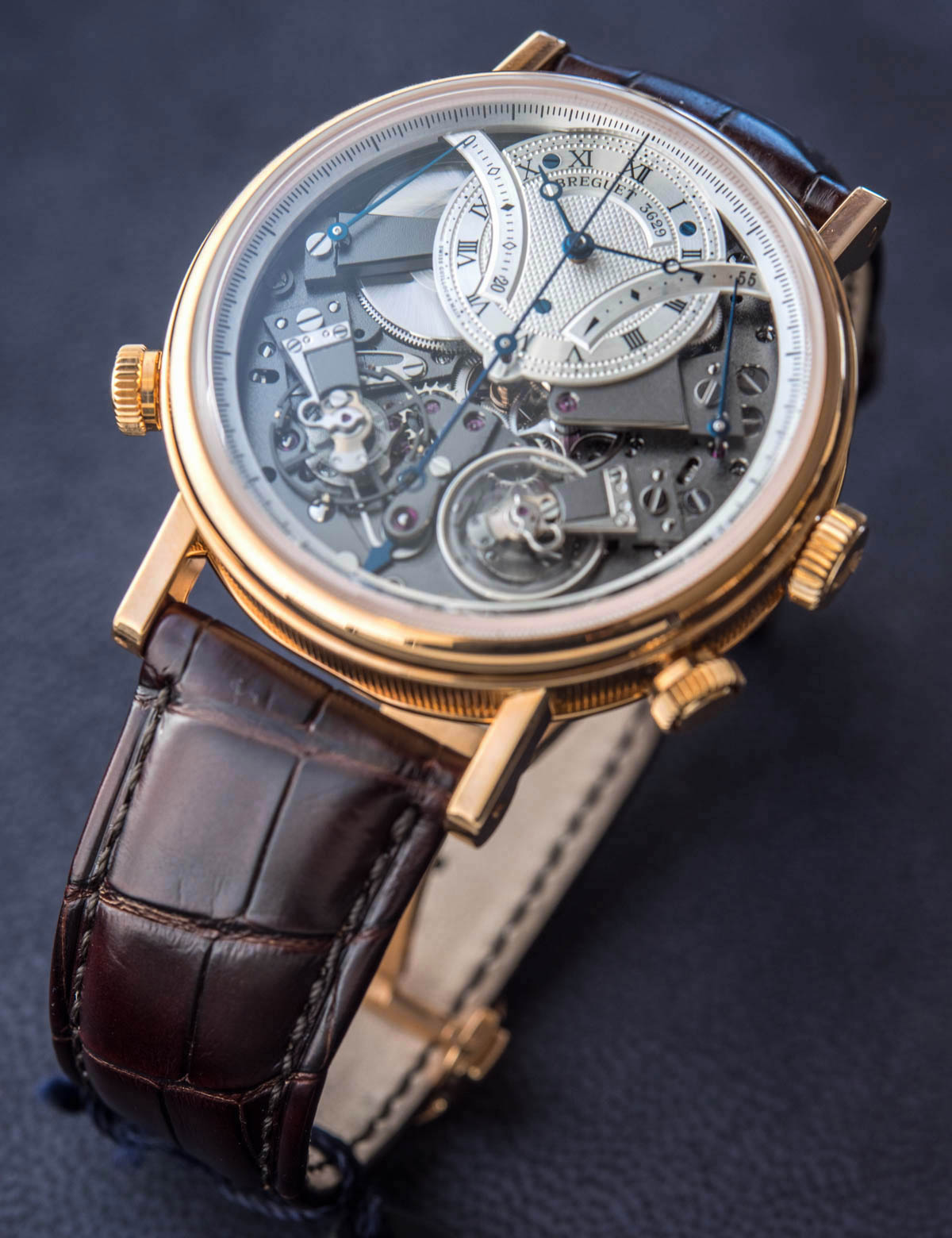 This is done for a number of reasons. The first and foremost reason probably being that it’s a cool exercise for a high-end manufacturer like Breguet to do and show off their expertise. Second, because this way the regular timekeeping is not at all affected by the chronograph function. Whereas in regular watches running the chronograph function and all its parts often results in inferior accuracy due to a drop in amplitude. Here the two are completely separated – not just the gear train, but the power supply as well.

Third, the chronograph’s balance wheel operates at a frequency of 5Hz, technically allowing for a 1/10th of a second accuracy – although the kept time cannot be read with that accuracy from the dial and Breguet simply highlights the higher frequency as something to provide greater timekeeping accuracy, rather than weighing in on the 1/10th of a second game. For this to work, Breguet actually crafts the left-side balance wheel from titanium, so that it can be the same size and symmetrical with the regular balance wheel that operates at a frequency of 3Hz with a power reserve of 55 hours. 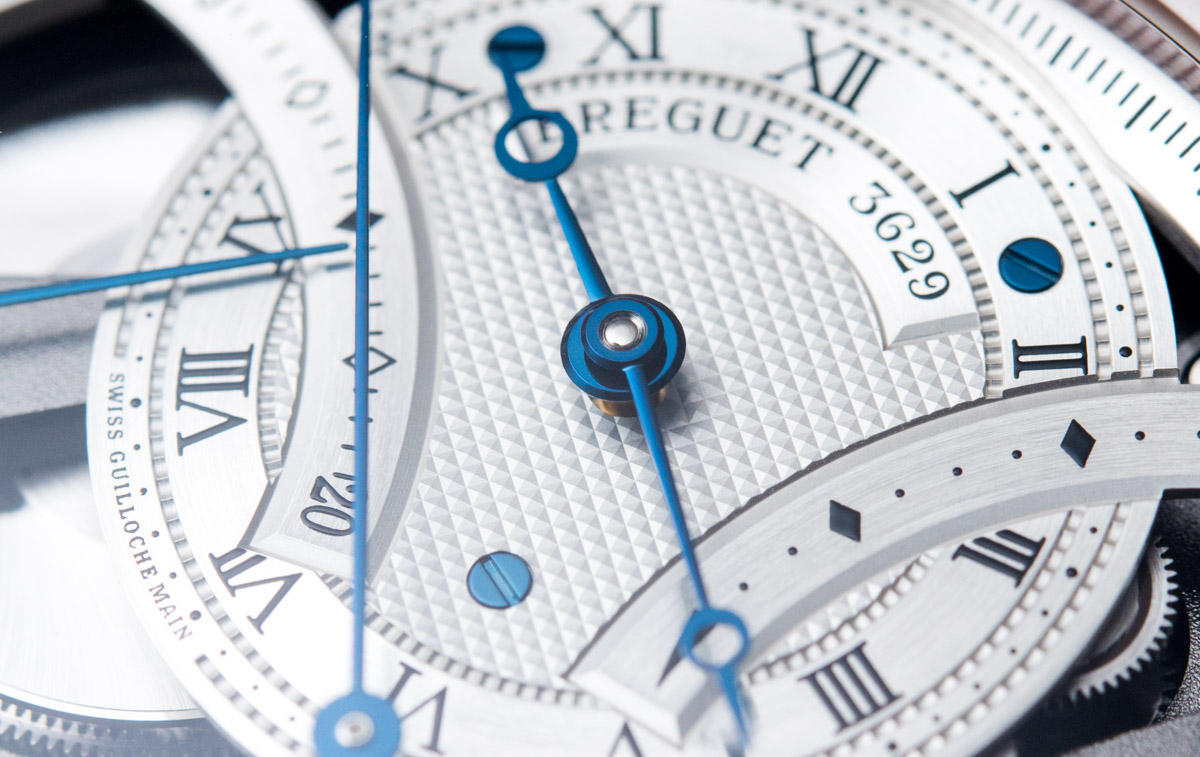 Fourth, so that the two timekeeping features are completely separated, the chronograph is powered by its own dedicated power source, a flexed blade spring. I put that in bold just to highlight how cool that is. This flexed blade spring provides a power reserve of only 20 minutes, meaning the chronograph can only run for and record a time period within that 20 minutes. The spring is tensioned every time when the chronograph function is reset via the crown at 8 o’clock – it is a bit like a minute repeater whose power source on most all watches is “charged” when the minute repeater is launched by a pusher or lever. Here, the chronograph is readied not when started, but when reset to zero – an ingenious and truly elegant solution that I admire greatly. It is like a 20-minute watch that you can operate at your will. 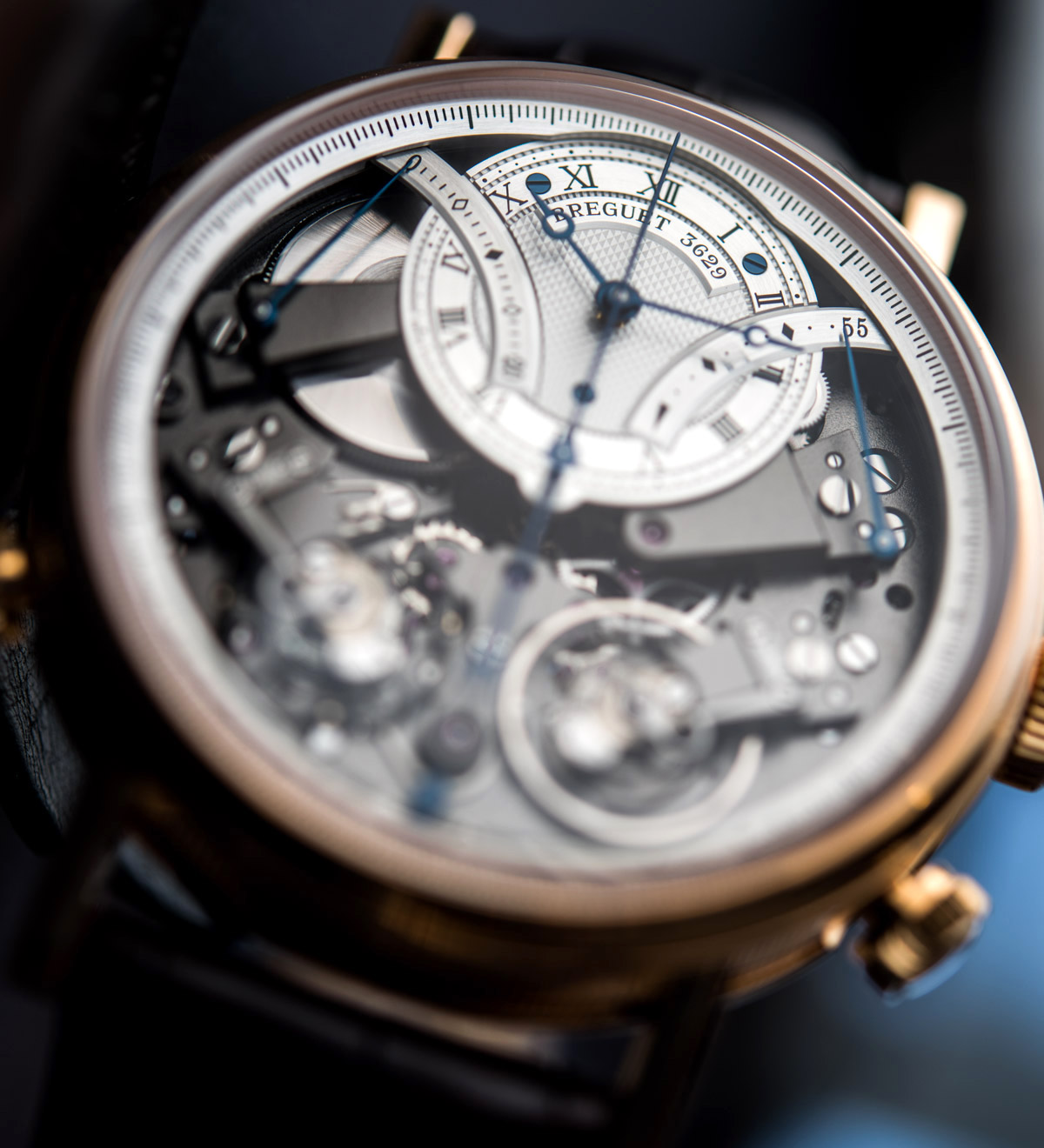 To really nail down dial symmetry, the 20-minute arch counter of the chronograph is balanced by a 55-hour power reserve arch on the other side of the watch. The time is obviously indicated by the small sub-dial at the 12 o’clock position – decorated with a guilloche pattern that Breguet produces in-house. It’s a fact I had been skeptical of right until I visited the manufacture a few years ago and saw for myself the massive room with plenty of these old-school, hard-to-find, massive machines with their rosette stones and cutting mechanisms hand-operated by the guillocheurs of the modern Breguet. Cool stuff, really very cool – as pictured below. 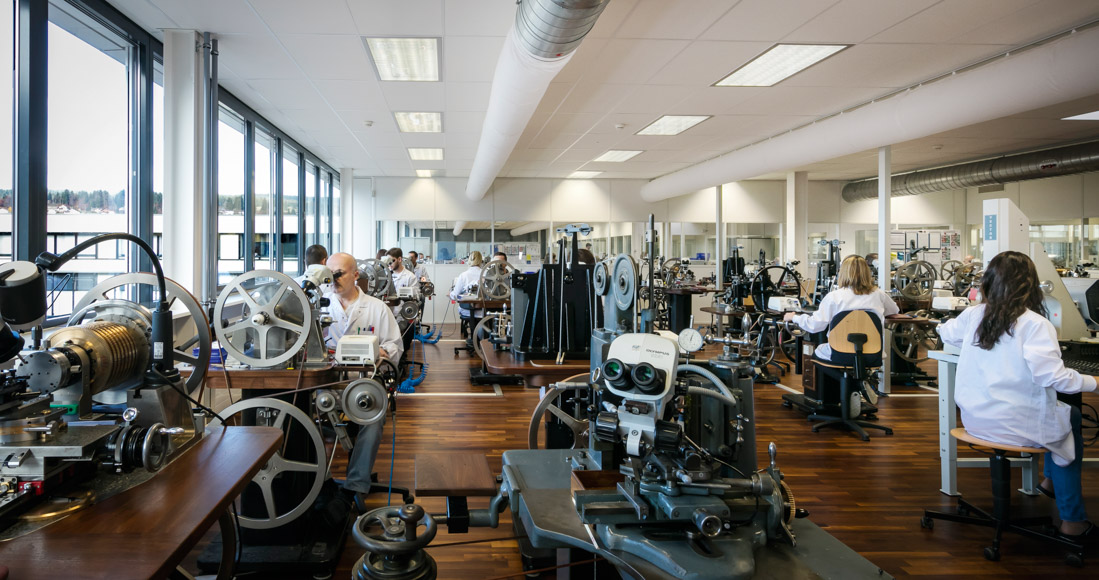 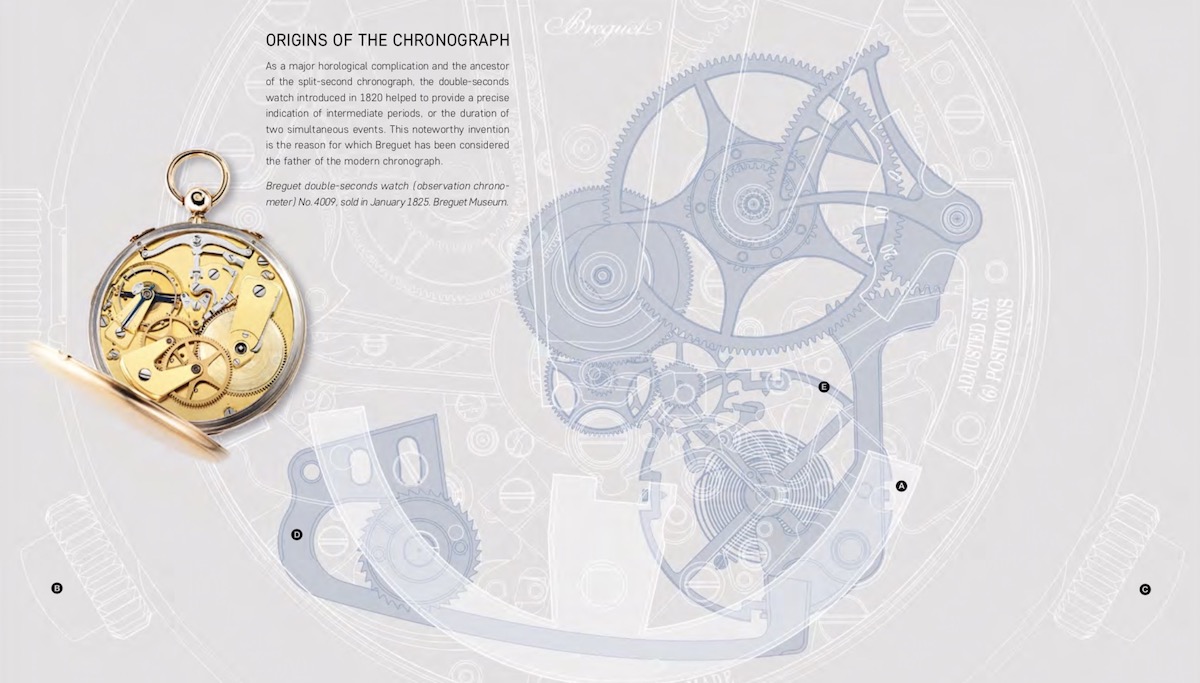 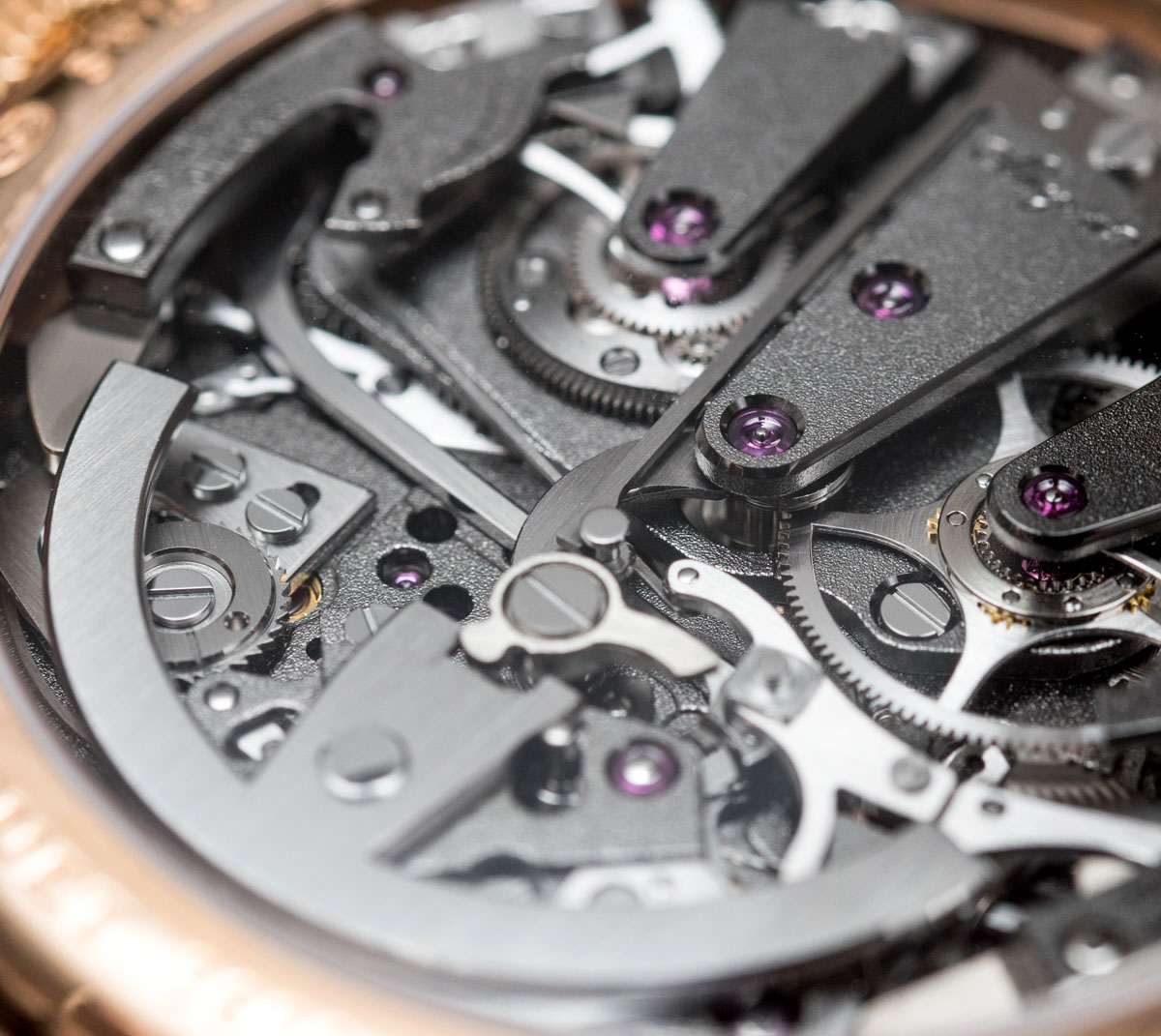 On the caseback side, you’ll spot this large anchor-like component. It is the “chronograph control” part, designed to mimic a similar component in Breguet’s January 1825 No. 4009 double-seconds pocket watch. Because when you’re as obsessed as Breguet, you’ll leave behind a company that continues to keep accurate archives (Breguet passed away in September 1823). As far as I understand, this component on one end is linked to the chronograph’s start-stop pusher mechanism, while the other acts on the chronograph mechanism itself to start or block it. Its vertical strip part acts on the On-Off indicator that you’ll see in the center of the image above, which in turn is linked to a little On-Off indicator arrow in the low-center of the face of the Breguet 7077. This is what you see on the picture one above – apologies for this low-res image that we phished from a Breguet PDF. The chronograph start-stop pusher is on the left-hand side on both my and their image just so you can picture how the whole thing operates. Essentially, when the pusher on the left of these images gets pressed, it acts on the anchor-shaped thing whose middle part swivels the On-Off indicator while its further end starts or stops the chronograph. 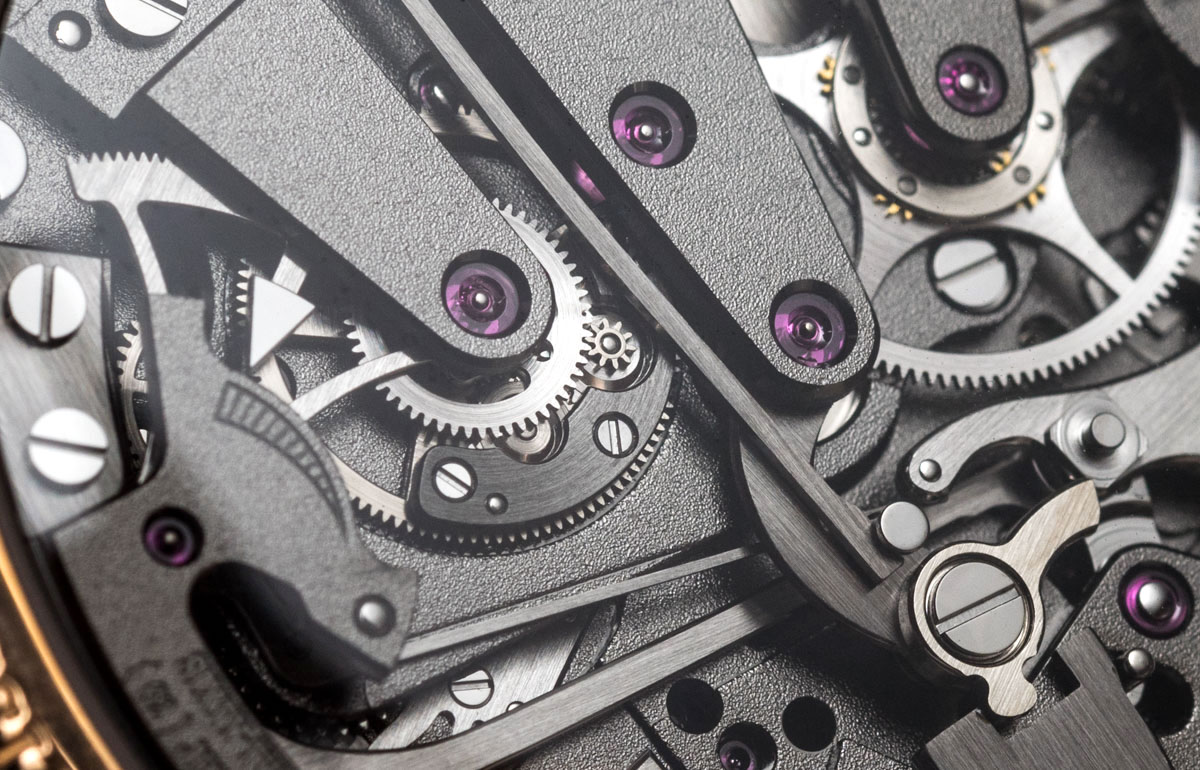 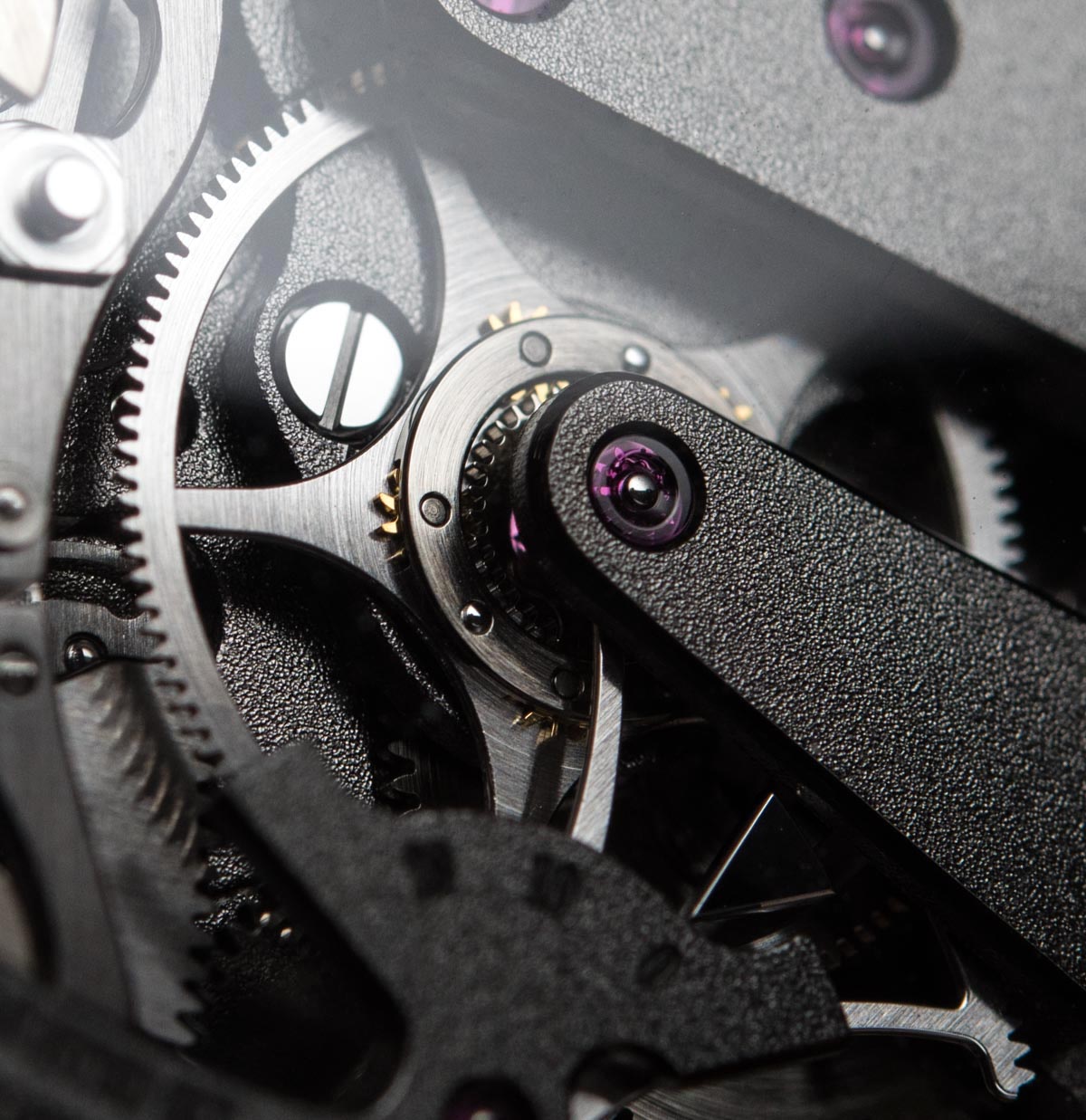 Finishing is in tune with the old-school-cool Breguet vibes. No Geneva stripes or any of that nonsense. In its place, we have a frosted finish and bevelled edges (if you look in the lower right corner if this image above you’ll see a small snail whose unbelievably thin and narrow edges have even been bevelled and polished). All plates are in a dark grey color that lends the entire watch a modern, sleek look. Both the colors and surface treatments make the 7077 that much more special: it just goes out of its way to not appear comparable to anything else out there and I love it for that. You look at this watch and this could only be a Breguet – even today, when we have so many open-face, complex watches from so many brands, there is no room for confusion. 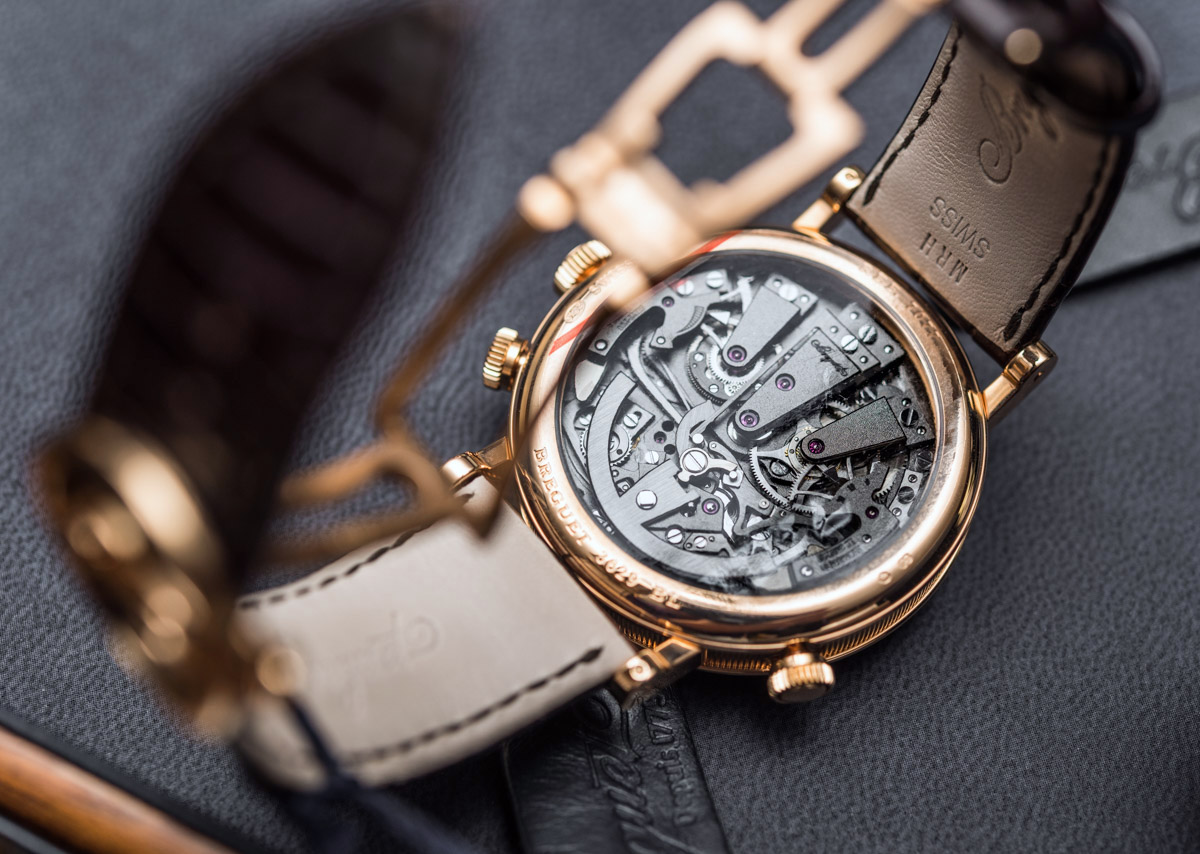 Depending on the light, the Breguet 7077 changes its appearance dramatically: sometimes it looks rather busy and confusing, like on the image below, while at other times the different dial-side components pop and stand out individually. Legibility with the small, Breguet-style hands and Roman numerals is fine and I certainly appreciate the inclusion of a solid dial – Breguet has never fallen for the temptation of sacrificing legibility in favor of wow-factor… Even his Marie-Antoinette watch was sold with a transparent and a solid dial, of course… But that’s a different story. 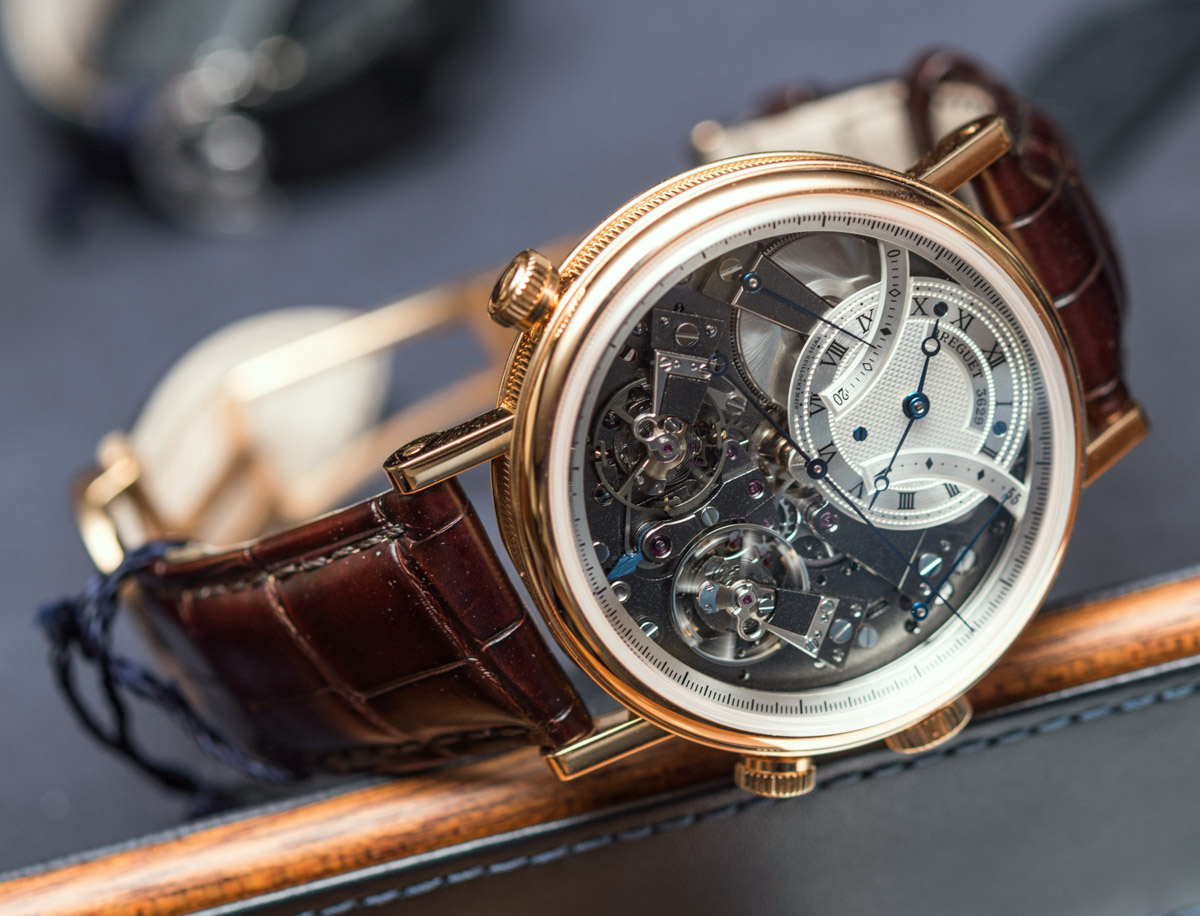 All in all, as I am sure you can tell by now, I do have a soft spot for this watch. It’s elegant, it’s novel, it’s cool, and it’s convincing, without appearing to be trying too hard; and that is all the more impressive when you consider the enormous pressure that comes from the name that it carries on on its dial. I am by no means a fan of all-things-modern-Breguet, but they did knock it out of the park with this one.