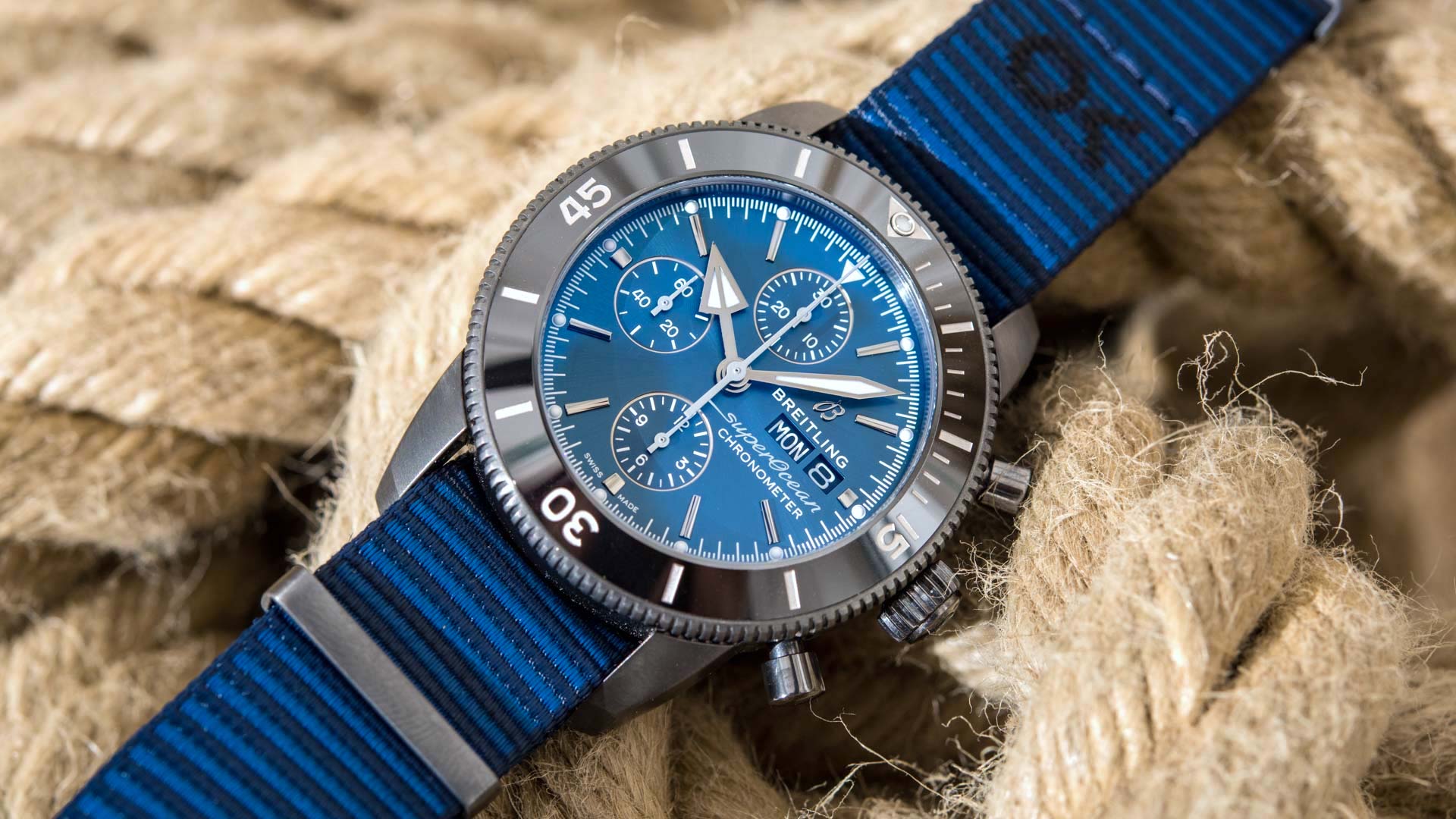 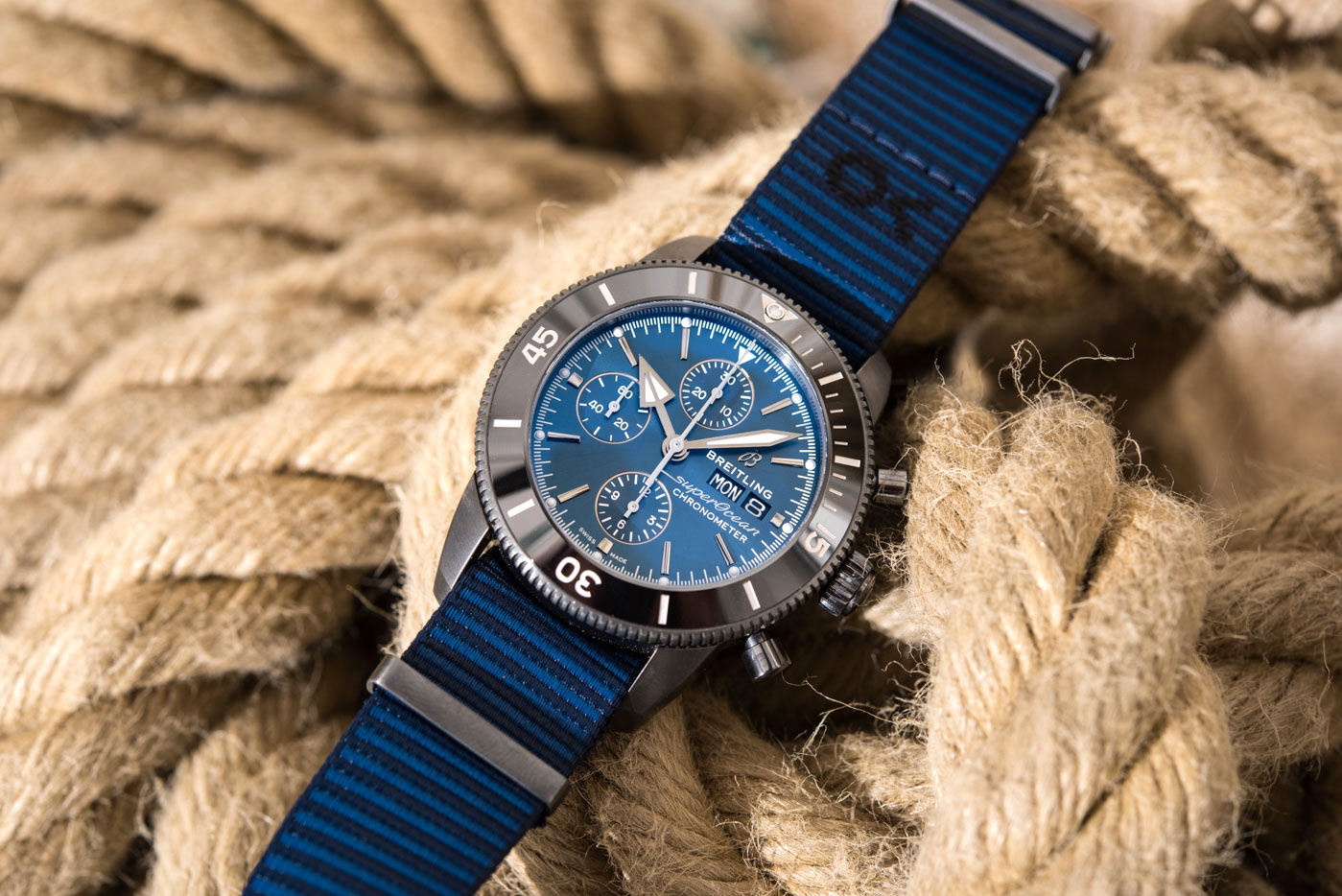 For perfectly good reasons, an ambassador announcement rarely elicits more than an eye roll in the watch world, but when a brand partnership is done right, and for the right reasons, everyone stands to get something out of it – including watch fans. Thankfully, Breitling’s recently assembled “Surfer Squad” is surprisingly shaping up to fall in the latter camp, at least in my book, with the debut of the new Superocean Heritage II Chronograph 44 Outerknown edition watch. Now, bear in mind this isn’t an entirely new watch – it just adds a new dial and a sustainable twist to the existing in-house Superocean II we covered during Baselworld this year, in the form of a recycled nylon ‘Econyl’ NATO strap thanks to a neat tie-in with the ocean preservation initiative of Breitling Squad member Kelly Slater. 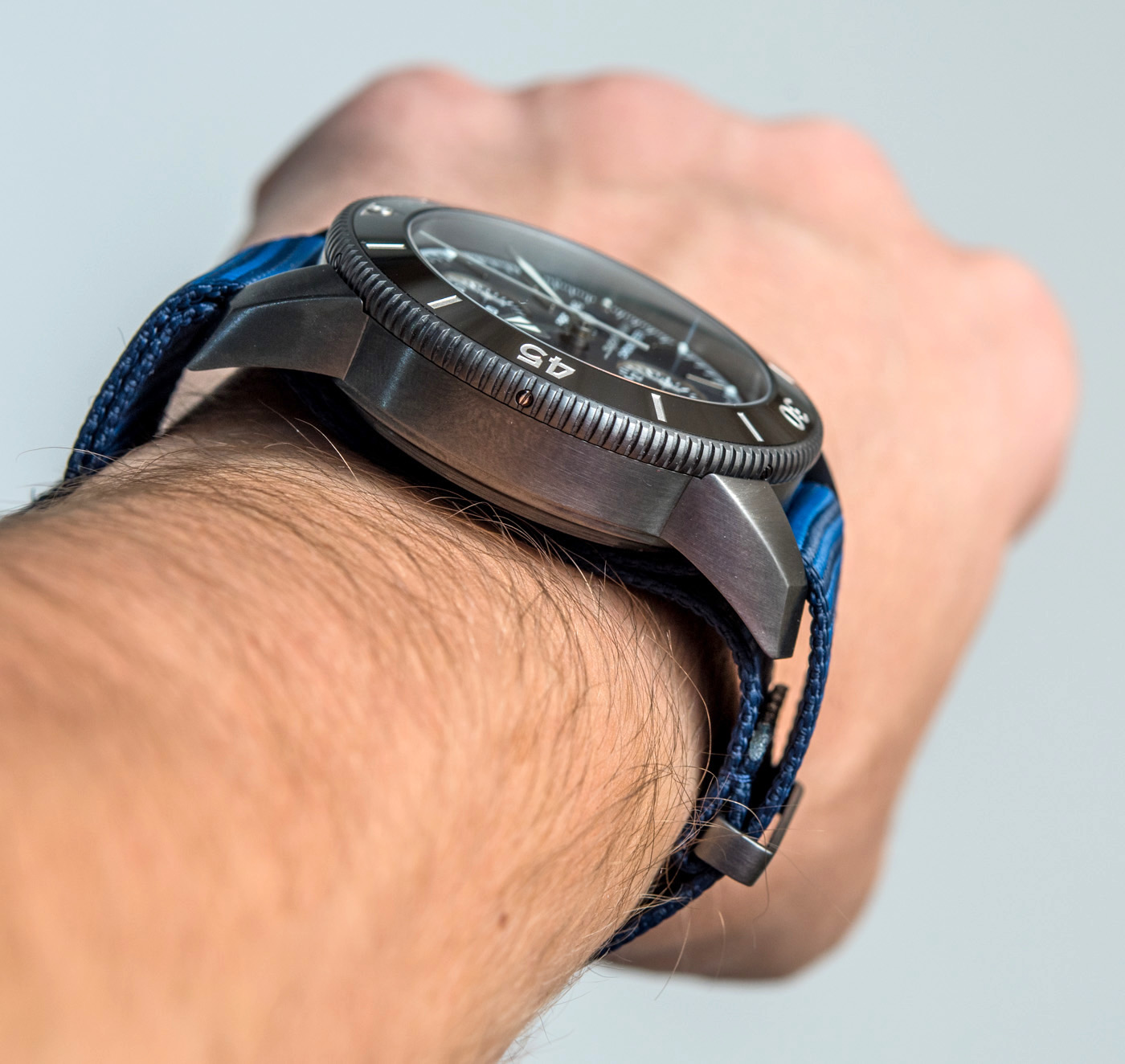 Granted, it’s not the first time we’ve seen a strap built with recycled materials in the watch space. Oris released a Diver Sixty Five earlier this year (to coincide with a beach cleanup initiative) that came on a strap woven from an exclusive new material called r-Radyarn, made from post-consumer recycled polymers. But the journey to this Breitling-Outerknown watch and this special new strap goes through Breitling’s new ‘Surfer Squad’ – a trio of brand ambassadors introduced by new CEO Georges Kern in the early months of his tenure at Breitling, which includes the likes of Australian surfers Stephanie Gilmore and Sally Fitzgibbons; but it’s the inclusion of 11-time World Surf League Champion Kelly Slater that has yielded this collaboration. 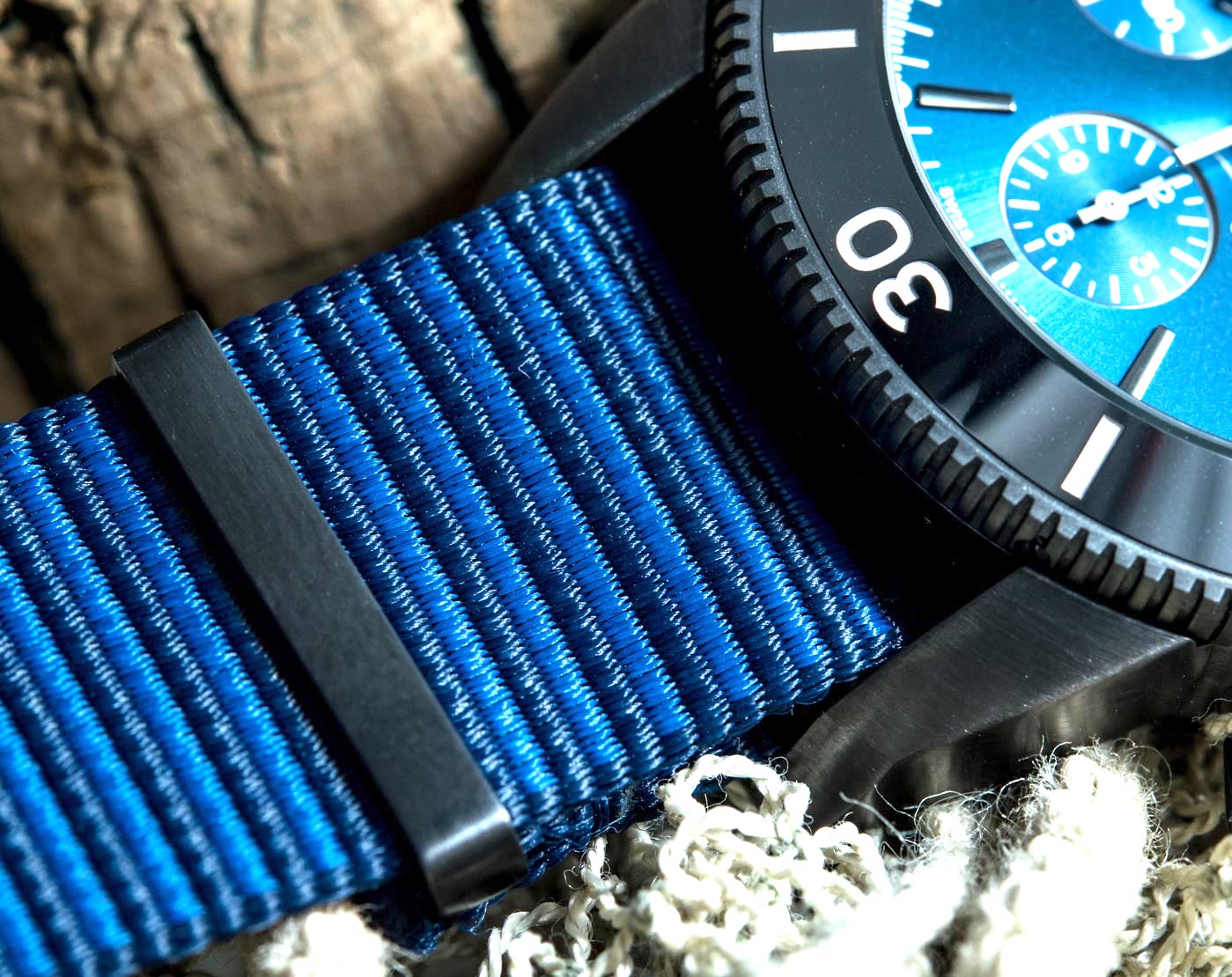 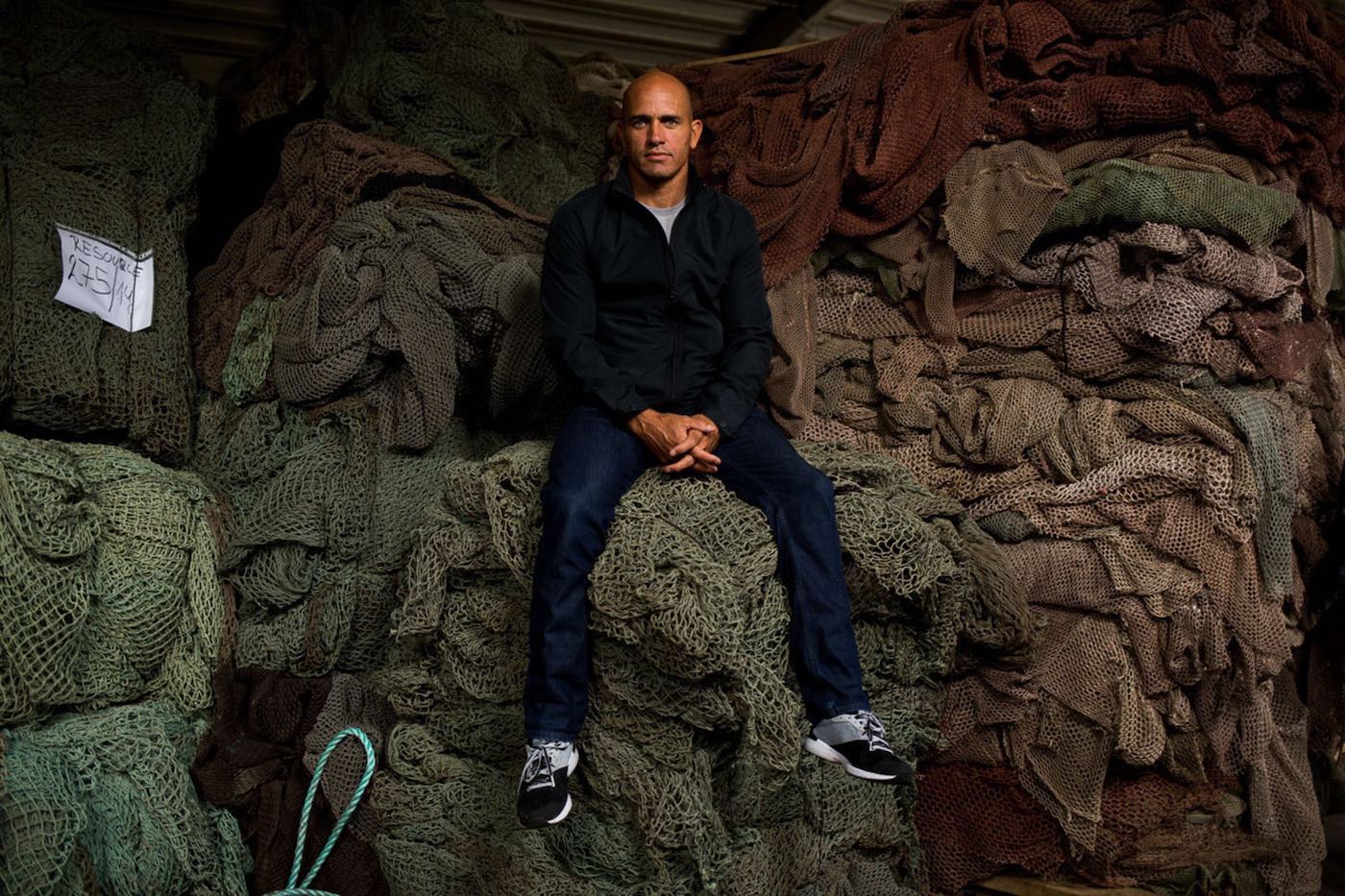 Kelly Slater with fishing nets to be recycled into Outerknown textiles. (PRNewsFoto/Outerknown)

See, Slater co-founded Outerknown back in 2015 along with prolific menswear designer John Moore, and together, the two have created a menswear brand committed to ocean protection while using as many environmentally mindful manufacturing alternatives as possible – including recycled fishing nets and old nylon surplus to create products like flannel shirts, Levi’s jackets, and board shorts. So it should come as little surprise that a watch collaboration with an apparel brand committed to sustainable manufacture would yield not only some kind of nod towards protection of natural resources but watch-specific accessories as well – and so here we are. 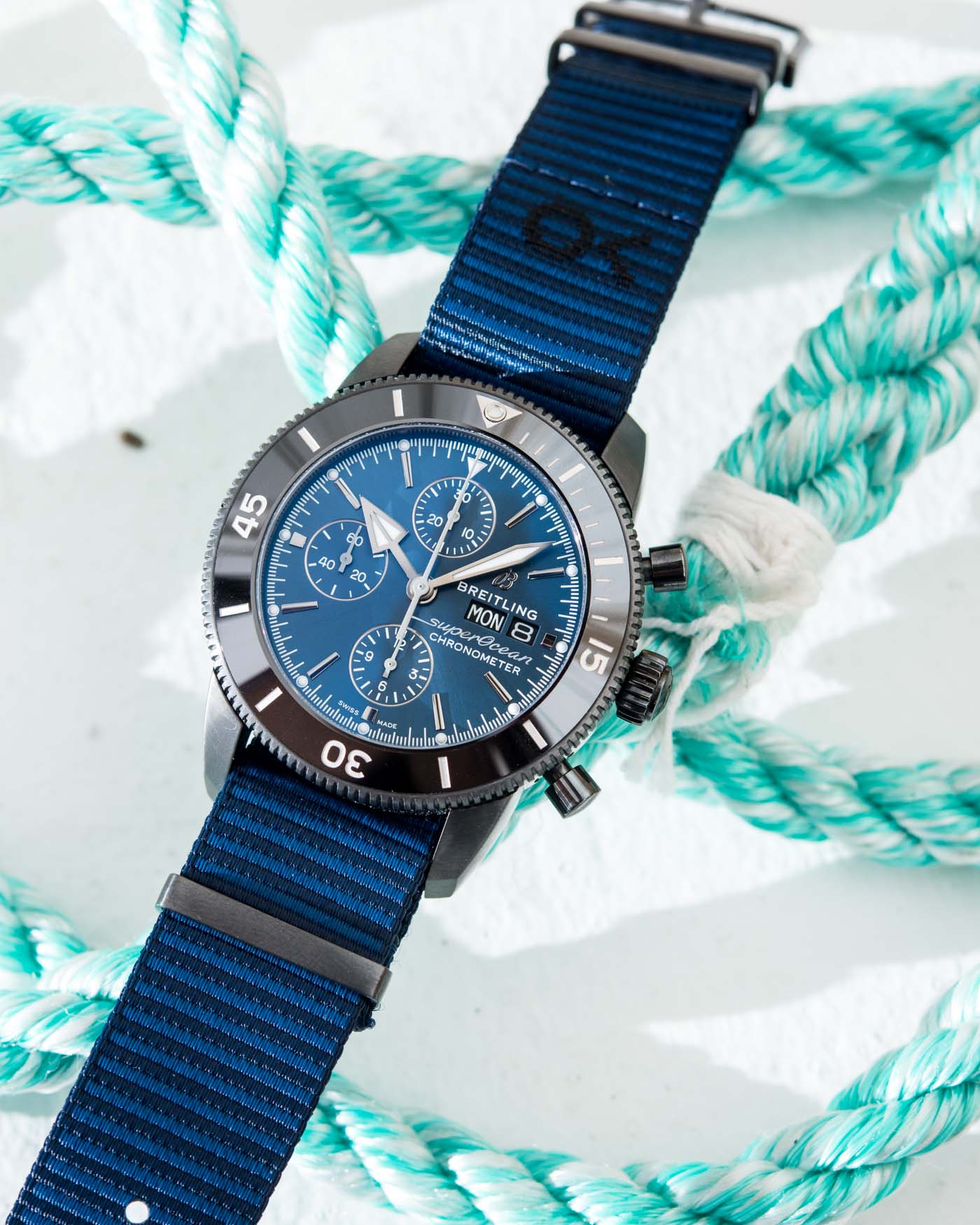 Before we get too deep into the watch itself, it’s interesting to see a brand move away from the traditional avenues of nautical partnerships (sailing, professional divers, etc.), and into the World Surf League – arguably uncharted territory for many Swiss watch brands, with only TAG Heuer springing to mind from recent years as a major brand tipping ints toe into the world of surfing. Beyond the Outerknown collaboration, Breitling (along with Outerknown) is now supporting the Ocean Conservancy, and the brand’s “triathlon squad” just announced a partnership with Qhubeka – a South African charity that provides bicycles to impoverished communities. All three endeavors are admittedly a small philanthropical piece of a larger pie, but one where genuinely good intent appears to be at the heart of Breitling’s new ambassador structure. 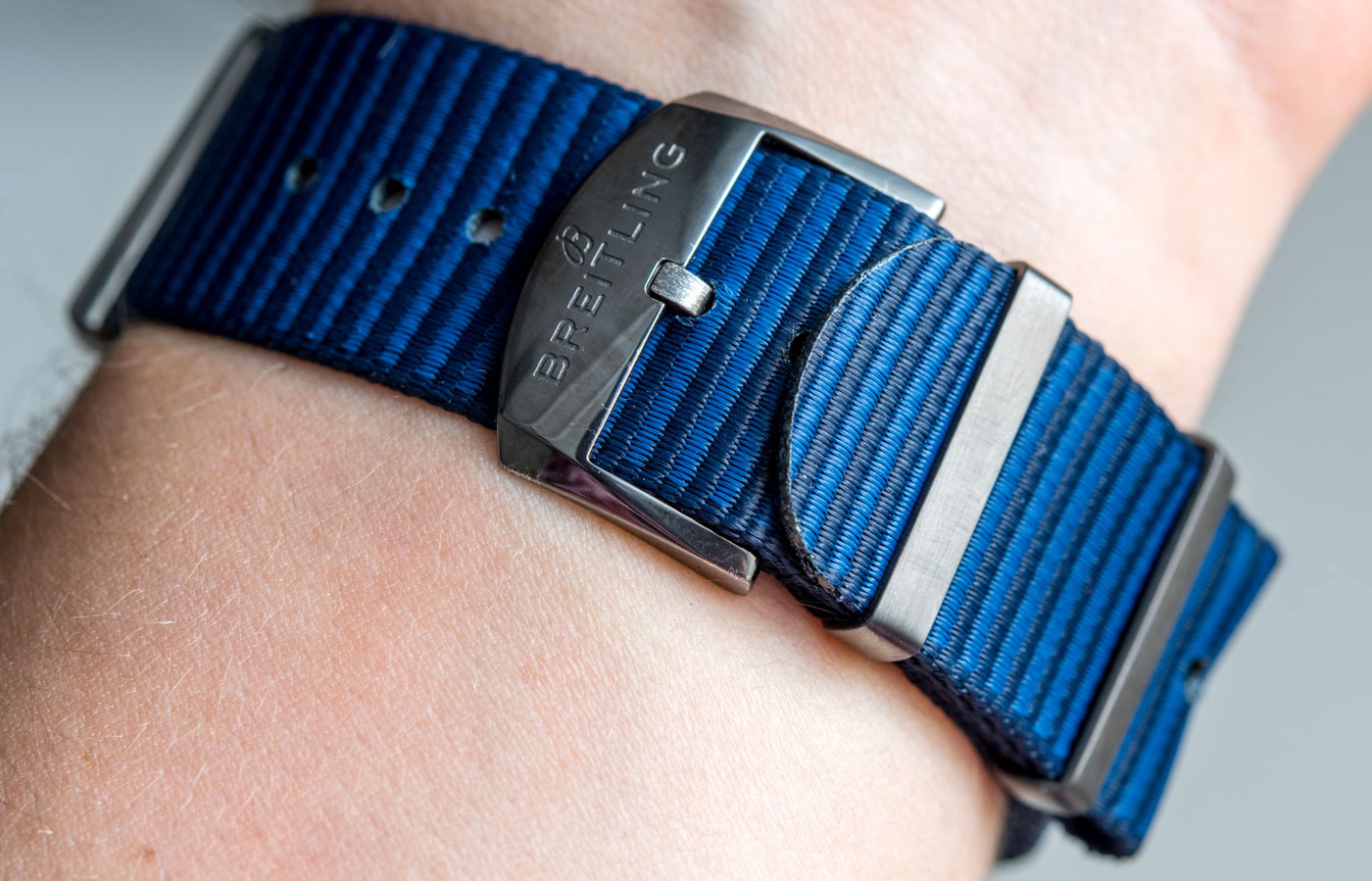 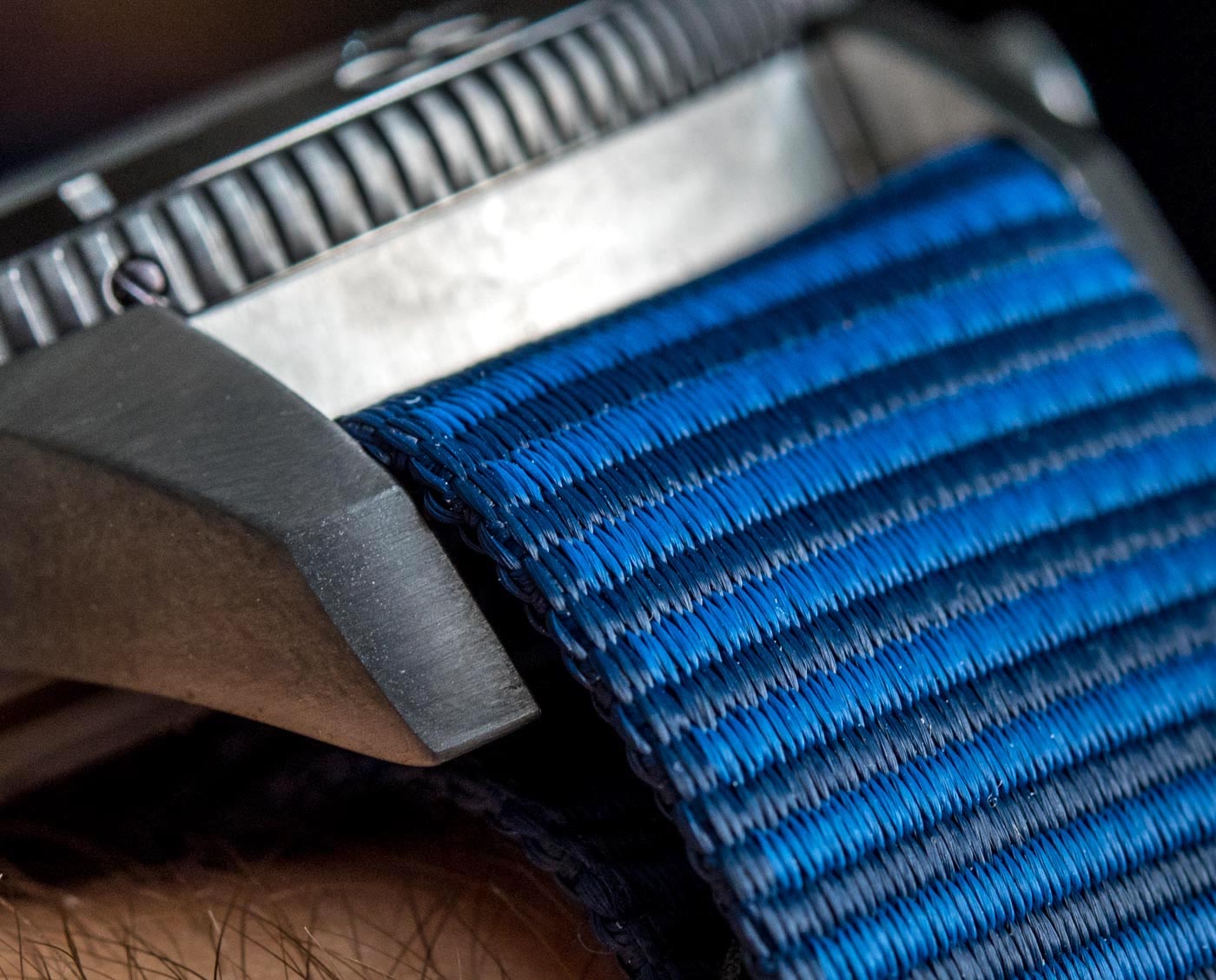 As mentioned, the Superocean II Outerknown builds on the variant introduced earlier this year, by adding a scratch-resistant black DLC coated stainless steel case and a dark blue sun-ray dial – both colors that are expressed in the striped nylon strap, branded with Outerknown’s “OK” logo above the 12:00 side of the case. During a short wear period, our David (who shot these images at the launch event in London) found the recycled nylon strap itself to be surprisingly soft to the touch, and a welcome contrast to many of the overly stiff, thin, and abrasive NATO straps that seem to be en vogue as of late (looking at you, Tudor). But perhaps the best detail of the strap itself is that nothing about it gives away the fact that it’s recycled – it’s quite simply a comfortable, well-made, forward-thinking alternative with zero downsides that we’d love to see more of in the future. It is only once you take a real up-close look at it that you see the plasticky material that resembles the tough fishing nets are made from. It doesn’t look any worse than your regular woven NATO – and, if anything, it feels softer and nicer to touch and wear. 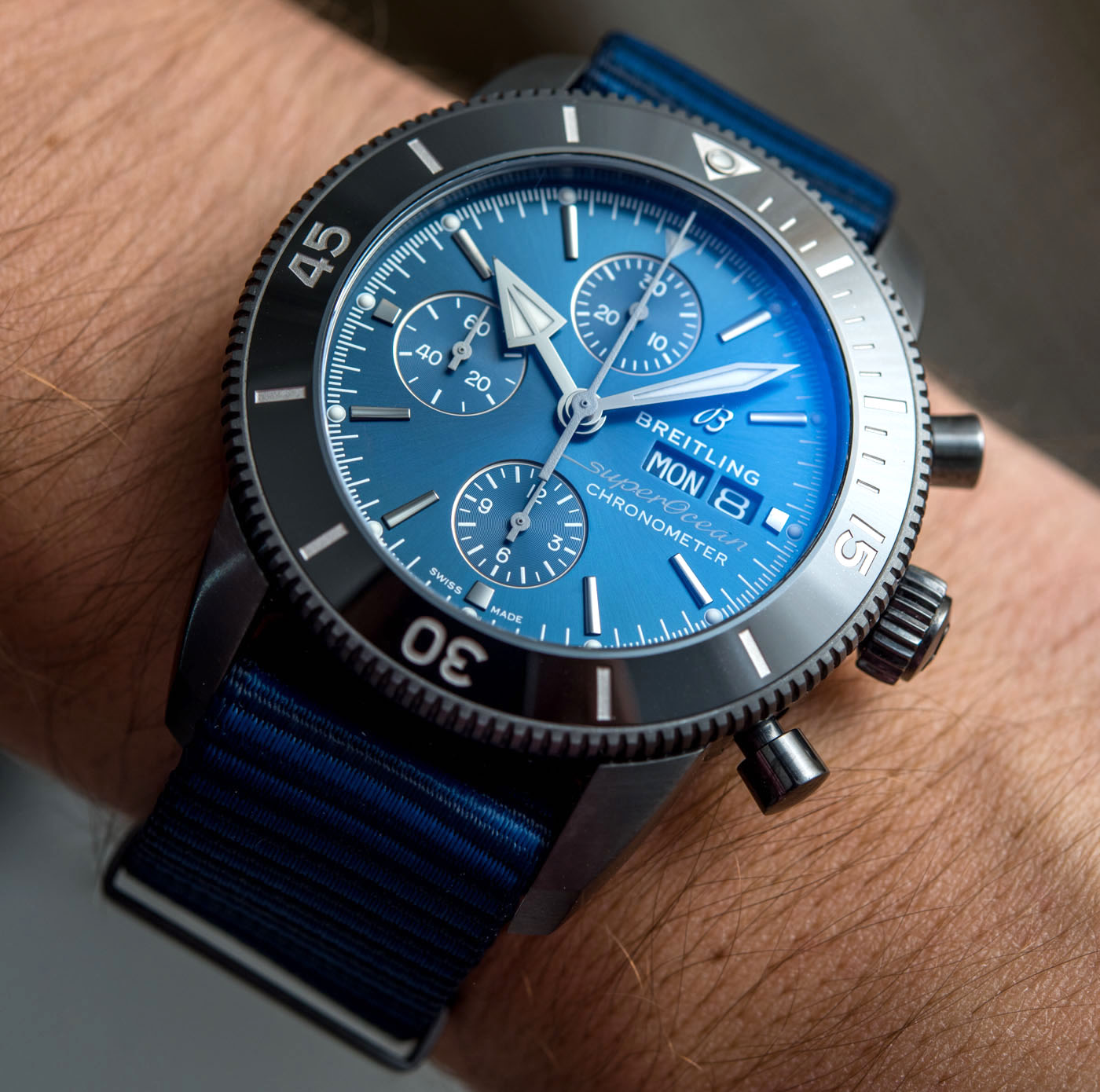 On paper, the watch itself bears all the same metrics of the current SOII: a 44mm stainless steel case, fitted with a Valjoux/ETA 7750 based chronograph movement with a day/date aperture at 3:00. Breitling has been pretty good with minimizing case thickness on these 7750-equipped pieces (that’s a famously thick base caliber), although this one will sit that much higher on the wrist with the strap running underneath it. The real test of this setup is how the recycled strap is able to support such a large, heavy watch head and we found the fabric softness conducive to a snug, comfortable fit that proved more than enough for comfortable wear — even though the watch did “flip” a bit side to side and did not sit perfectly flat on the wrist. Those who like to wear watches on NATO straps will know (and will not mind) this. 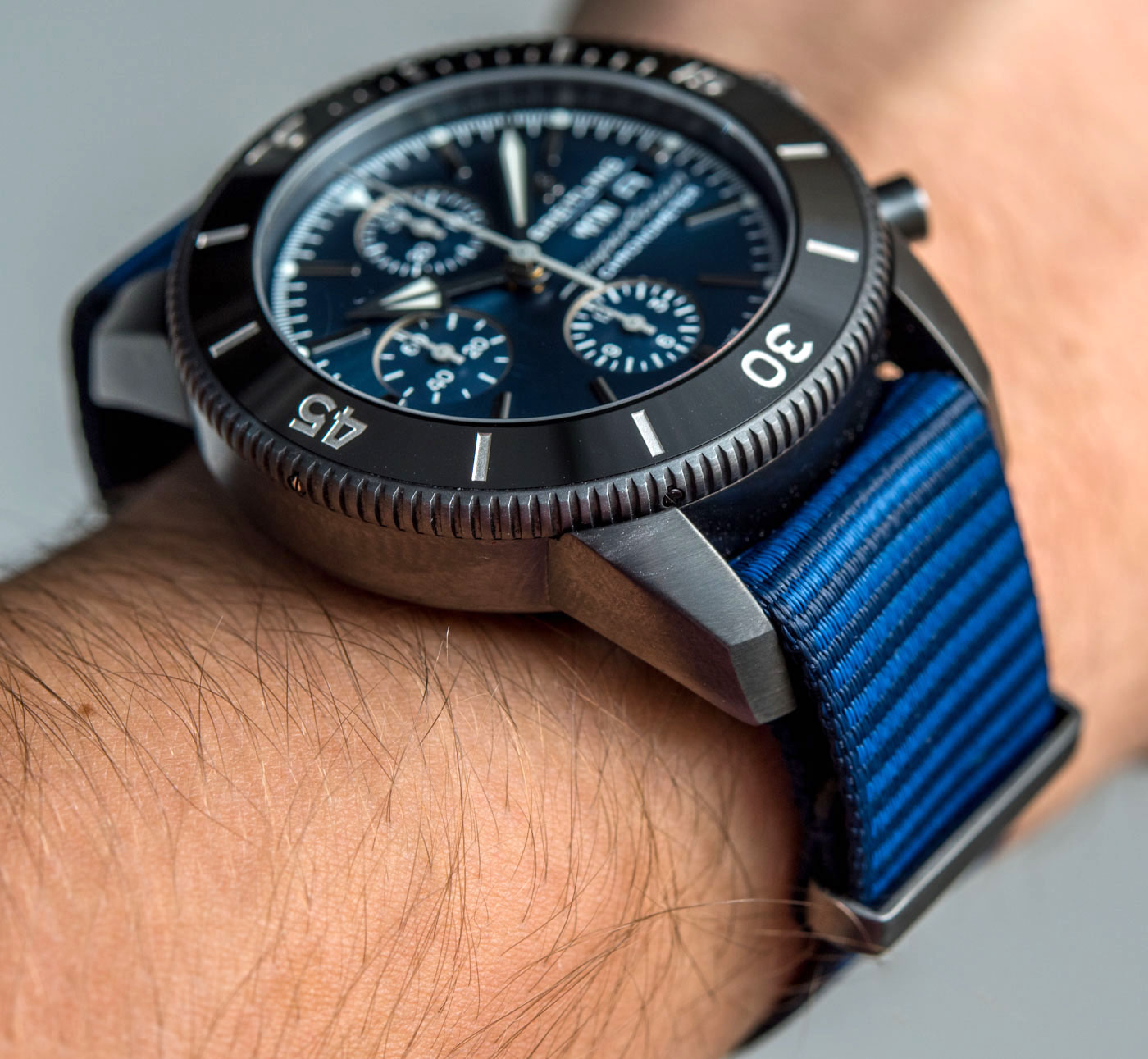 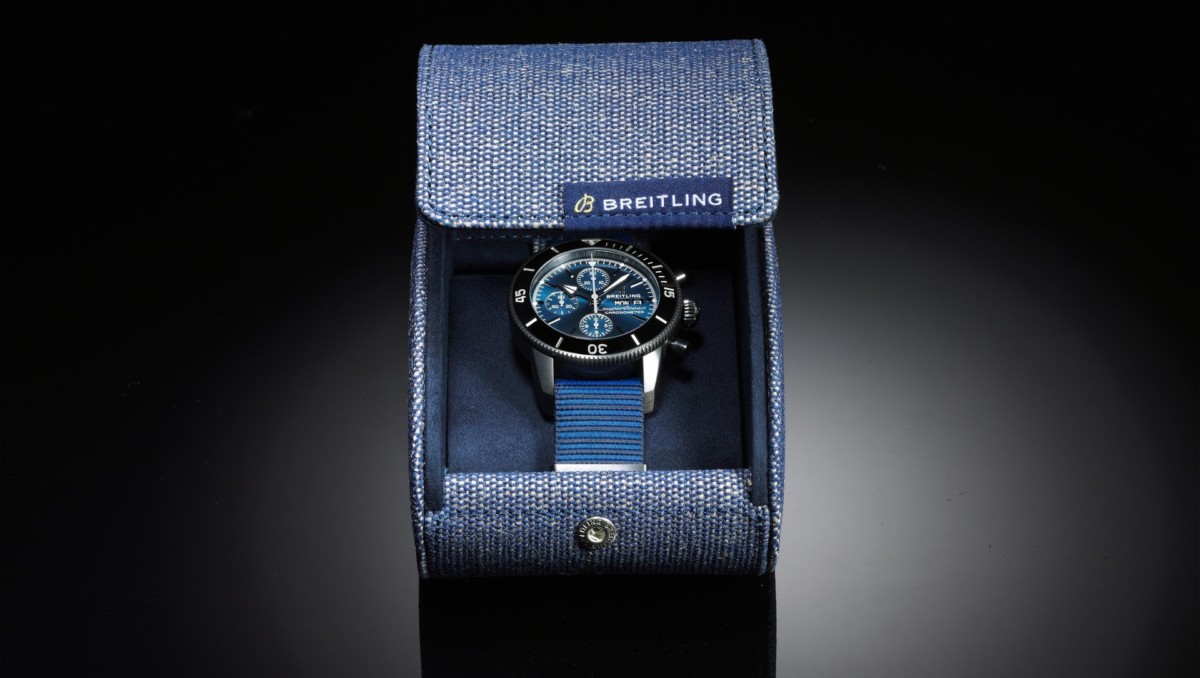 Even Breitling’s signature leather travel case gets the Outerknown treatment, shown here made from recycled materials.

Nearly three-quarters of a million tons of fishing nets and gear are abandoned in the ocean every year, some of which is up-cycled into cheap bracelets, sunglasses, skateboards, and other eco-friendly toys and home products, but this is the first time that we’ve seen recycled nets spun into a watch strap – particularly one from a luxury watch brand. It might be a simple innovation, but it’s a long-overdue one – and in an industry filled with passive, feel-good ‘slacktivism’ as the standard for doing good, it’s great to see larger mouthpieces like Breitling and others starting to brand these types of initiatives in a meaningful way. The new Superocean II Outerknown isn’t entirely a surprise – Breitling did hint on their collaboration page that specific products sharing Outerknown’s mission would be on tap for release by the end of the year, but here’s to hoping there’s more in the pipeline. Anyone taking bets on Breitling being the first Swiss watch manufacturer to create a watch from reclaimed alloys? Learn more about pricing in your area for the new Superocean Heritage II Outerknown edition on Breitling’s site.