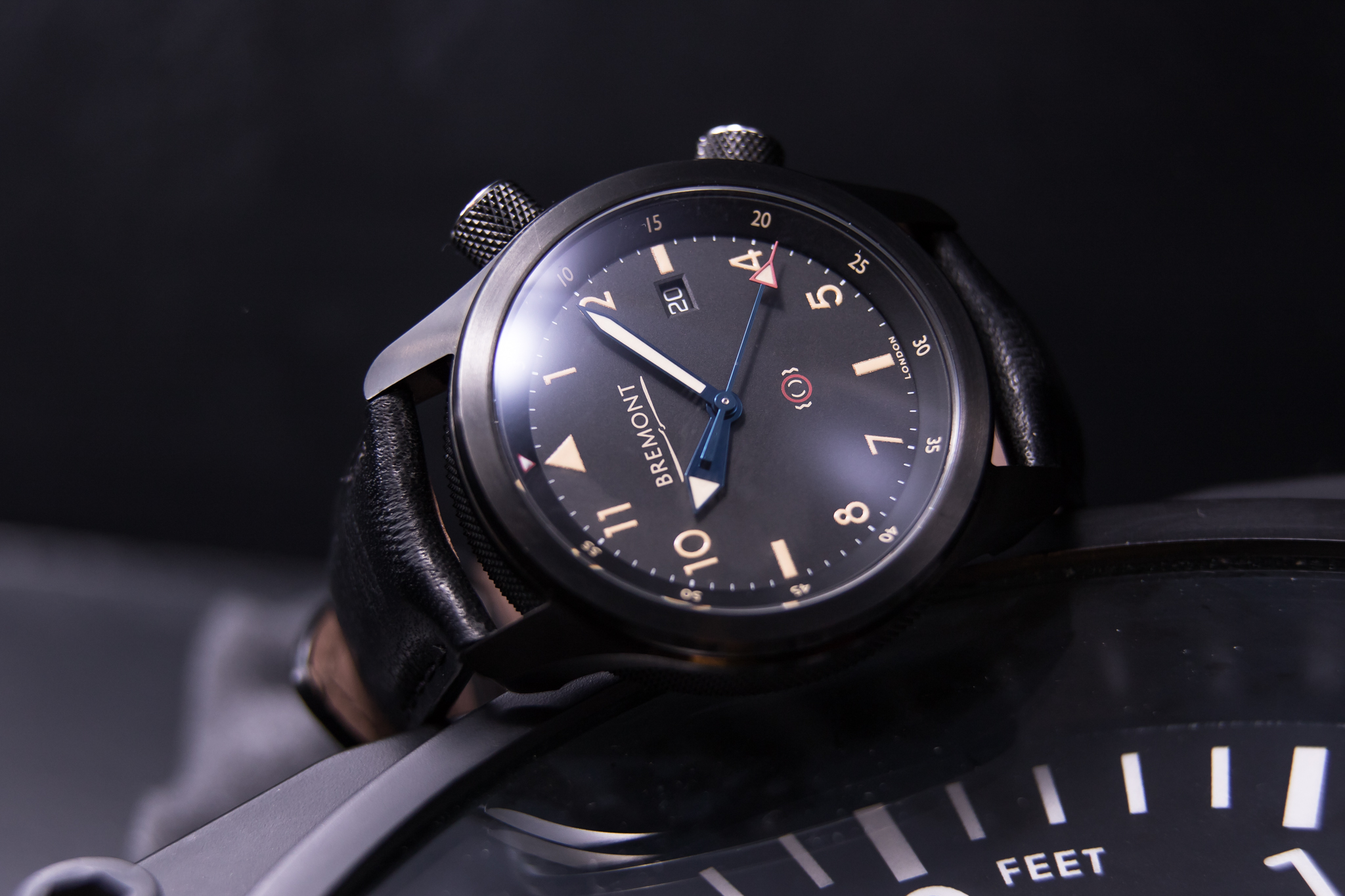 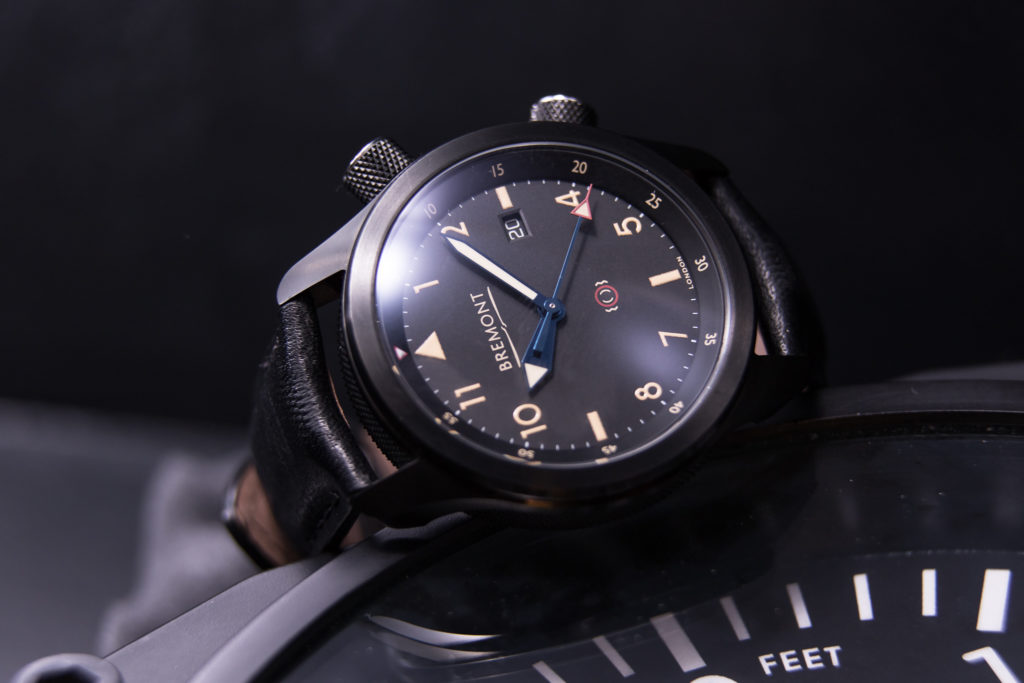 It’s been just over a year since we last wrote the Watch Release on the Bremont U-2/51-JET, where Jason Swire is quoted as saying this was “the brand’s most attractive U-2 model yet,” and after some wrist time, I’d have to agree with him. During those 12 months, the watch had gone to its own “Venom” movie premiere, split L.A. traffic on a Ducati, traveled to Dallas for the Red Bull Air Race, shook hands at several formal events, and took a selfie with an F-15 in Chicago. Suffice it to say, this aviation-inspired timepiece is a capable everyday tool watch and travel companion, with a side of subdued elegance. 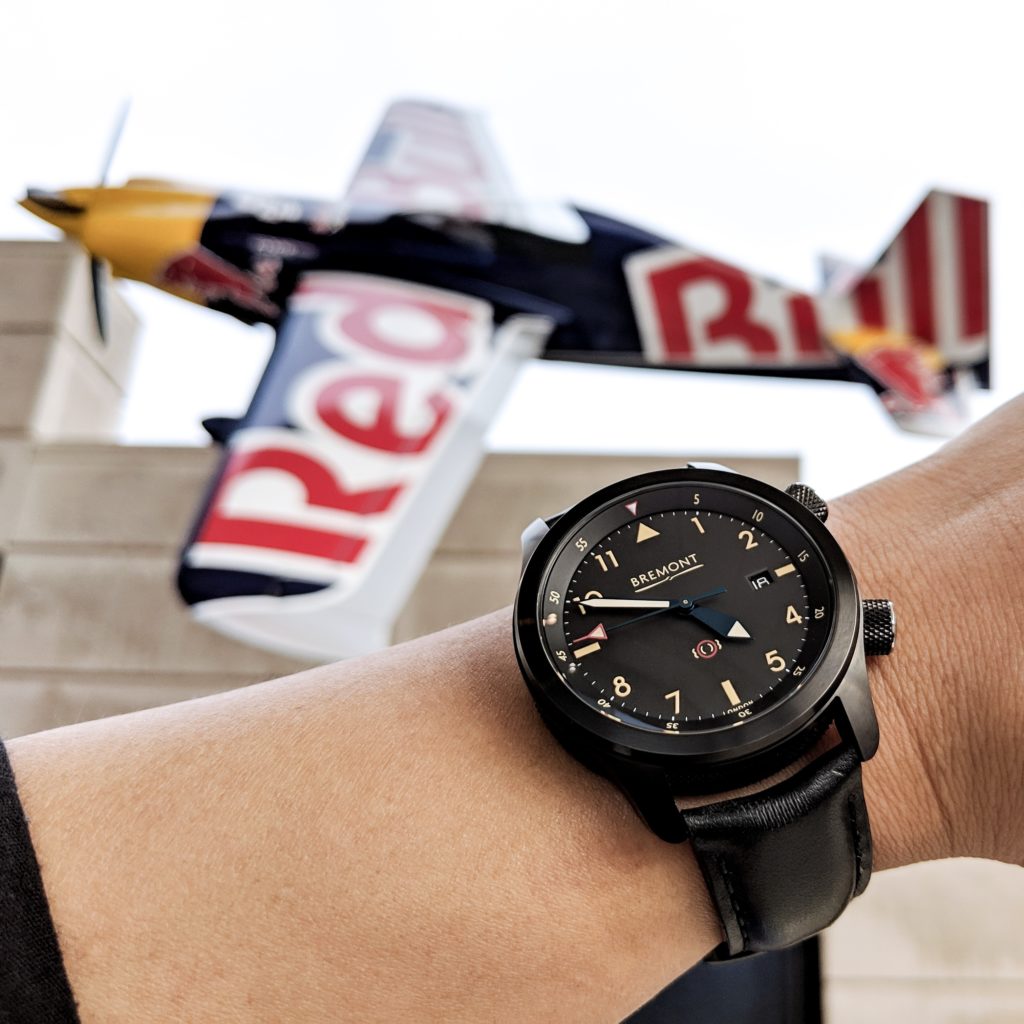 Bremont’s U-2 line of watches has been around for more than 10 years, and it’s gone through several iterations, as well as special, commissioned, and exclusive models. The newest stealth model has what the brand calls a “darker side,” due to its DLC-coated “Trip-Tick” case, smoked exhibition sapphire glass back, design cues from the Hawk T1 Jet aircraft, and a cameo in the movie, “Venom.” 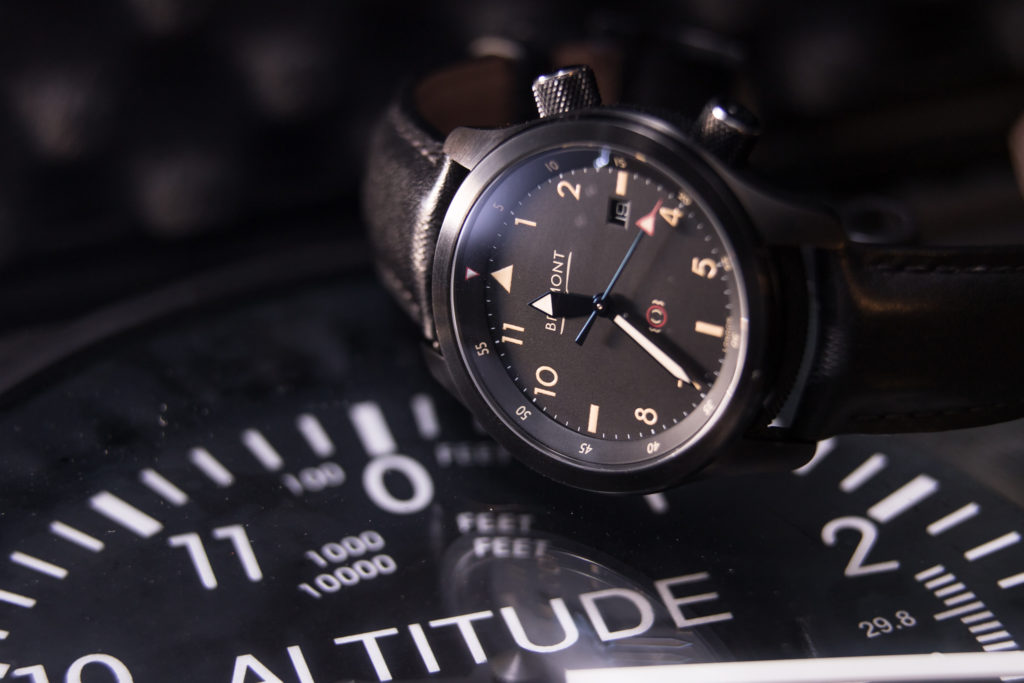 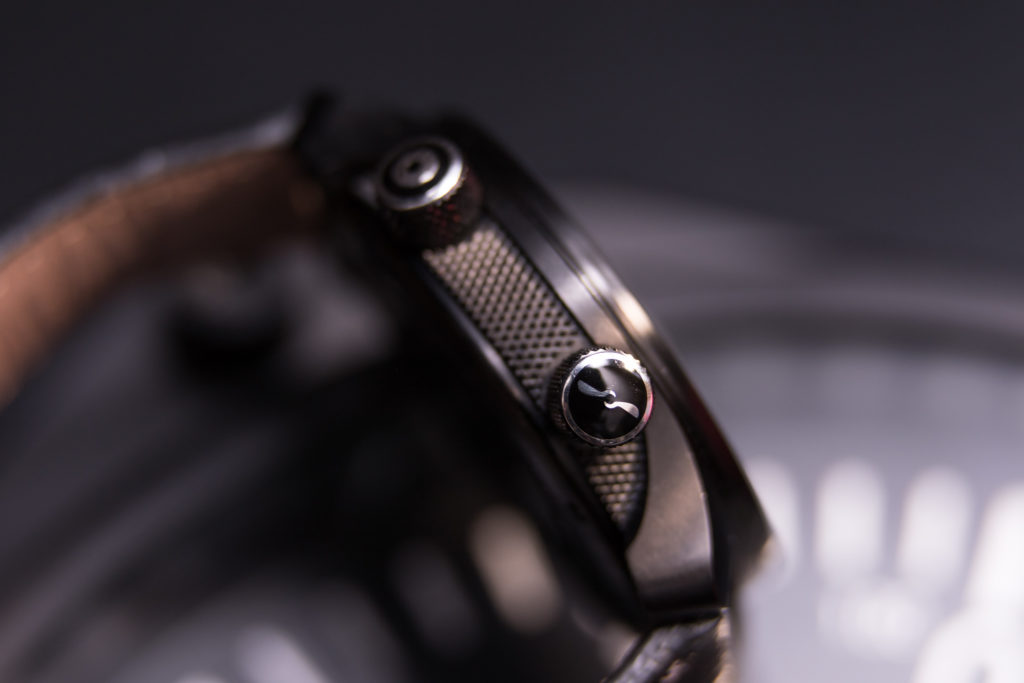 The stealthiness of the watch’s overall package allowed me to wear it on all sorts of occasions, including dressing it up with a full suit. It even paired nicely fully dressed down, with me donning gray jumpers, a prototype ABlogtoWatch t-shirt, and a black beanie. Come to think of it, that’s pretty much what Eddie Brock, Tom Hardy’s character in the “Venom” movie, was wearing, or at least the same color scheme. Unfortunately, outside of a dark monochrome wardrobe, the murdered-out G-shock color palette leaves a bit to be desired. 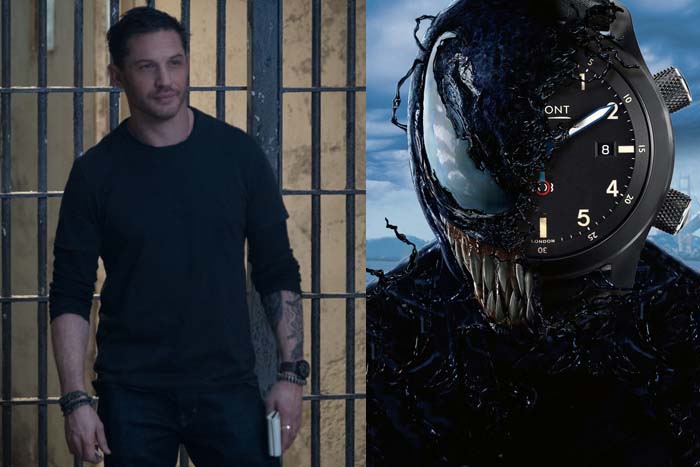 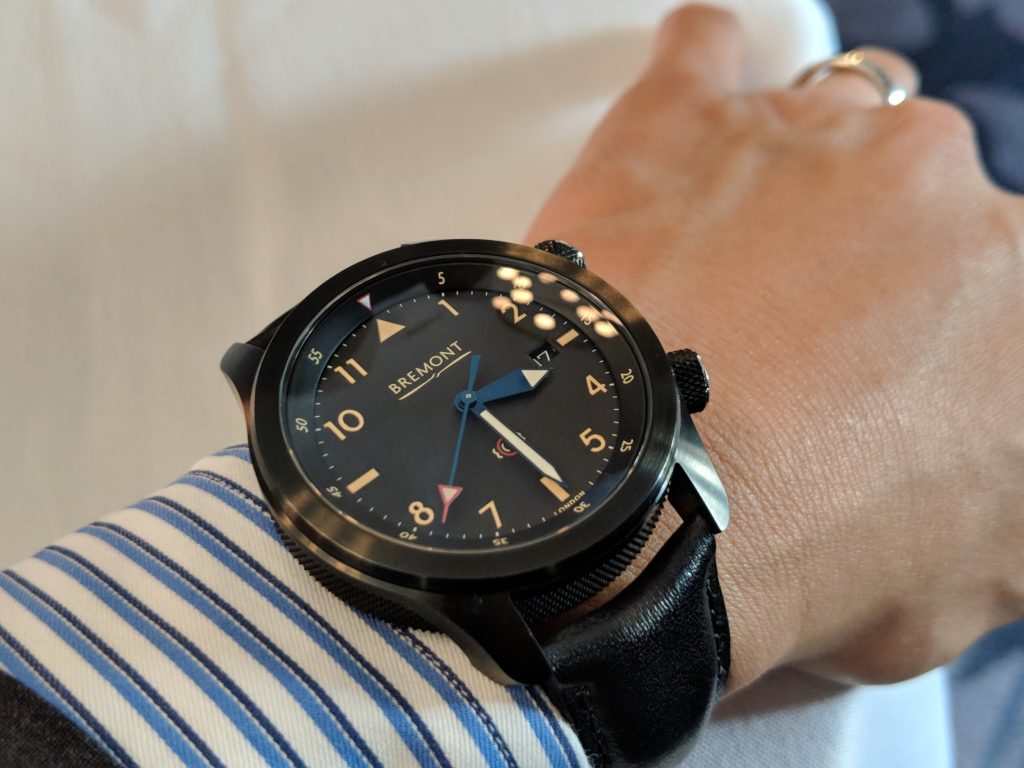 The case itself is the standard 43mm “Trip-Tick” case with a DLC middle barrel and dual crowns at 2 and 4 o’clock. The “modular” three-piece design is reminiscent of high-quality CNC-milled aircraft parts and has masculine lines with strong architectural curves. Both knurled crowns have great tactile presence and use a cross-hatch pattern like many knife grips, motorcycle pegs, mil-spec torches, etc. The caseback has a smoked exhibition sapphire glass that makes the movement look as if it’s been coated in a dark rhodium and displays the signature skeletonized Bremont automatic rotor. 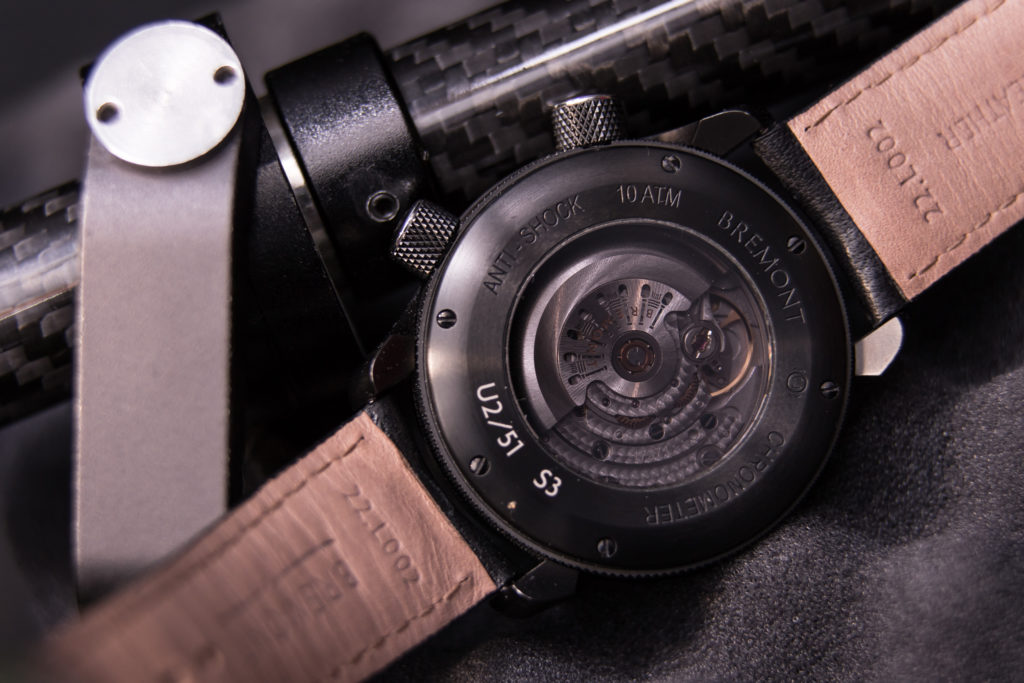 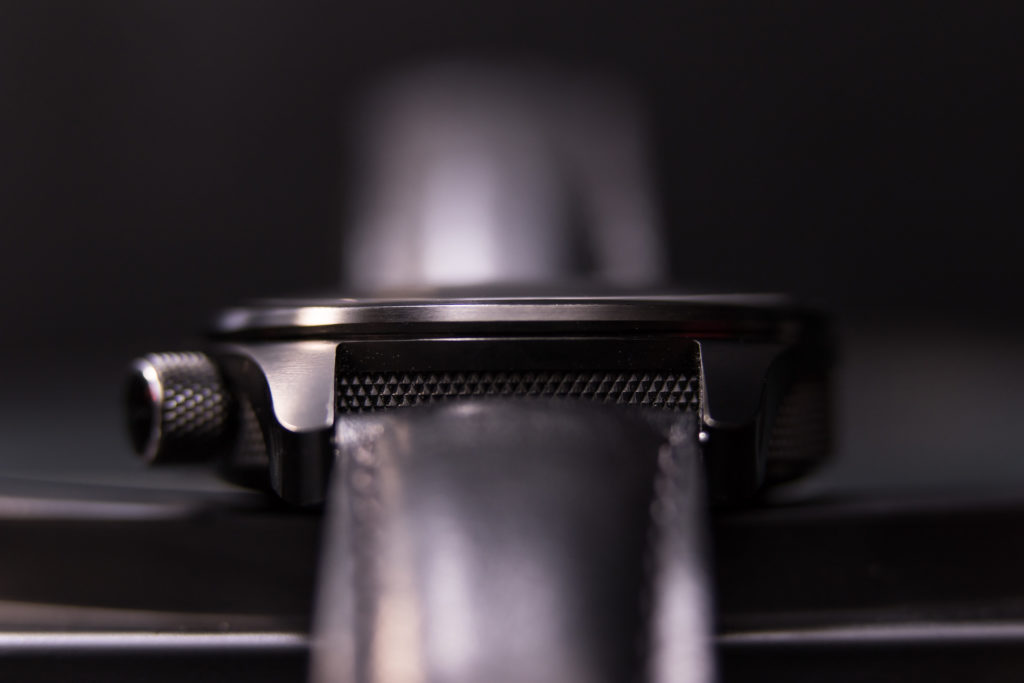 Worn on a 6.25-inch (~16cm) wrist, it’s larger than I would normally wear, but the curved and contoured lugs allow it to be comfortable and not too top-heavy, which isn’t a surprise, as the Bremont Supermarine Waterman Limited Edition felt the same way. 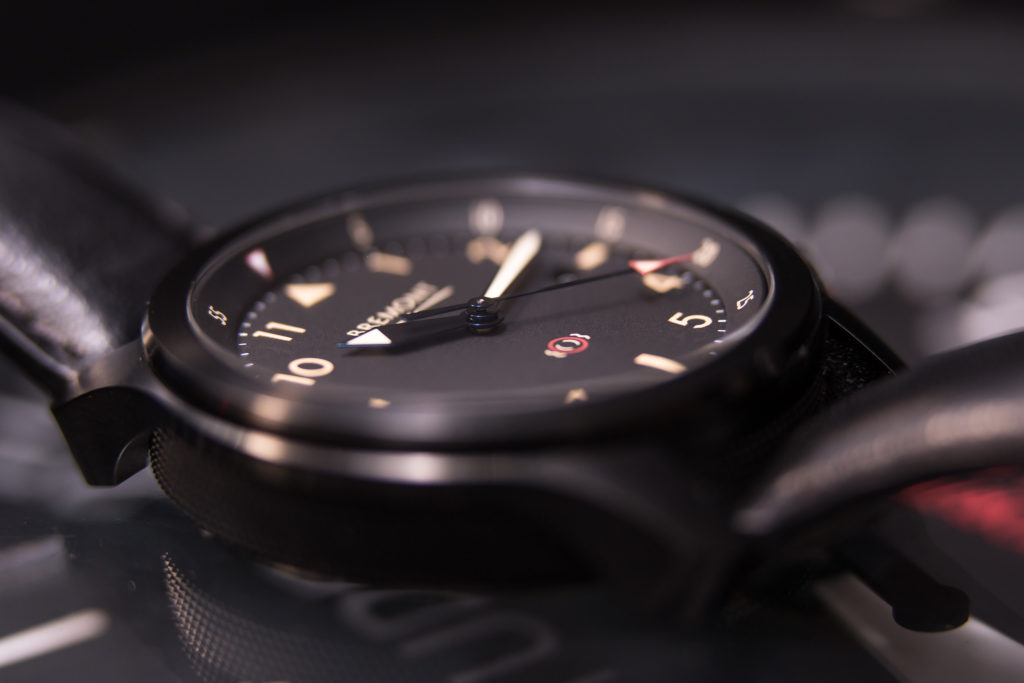 Working our way into the dial, we’re first hit with a visually pleasing domed sapphire crystal that’s crisp in optical clarity, without too much distortion around the edges. In real-world scenarios, the double-AR coating worked well, but the curve and size of the sapphire had me pulling out my hair when trying to take pictures of it. The blue hue of the AR coating actually added to the character of the watch and blended well with the blued hands. 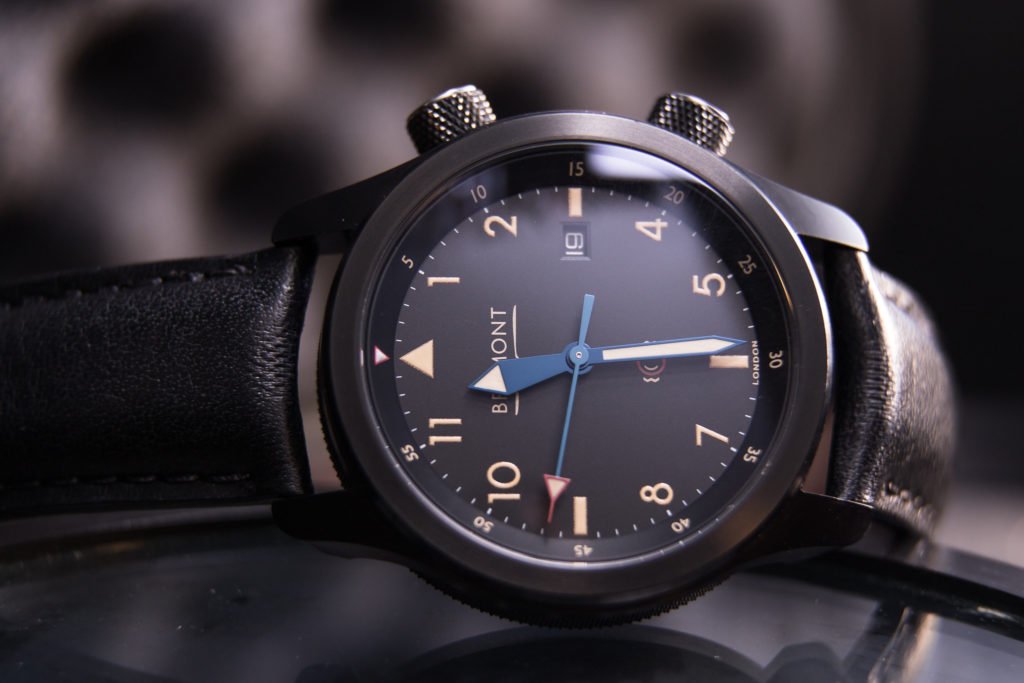 Speaking of the hands, one of our members commented by saying, “Because we all know that midnight blue contrasts greatly with jet black…and a pilot needs visibility above all!” While this is well-founded sarcasm, the watch was designed to celebrate the RAF’s 100 Squadron air ninjas. That said, the watch has gone through rigorous testing and can, if need arises, be ejected from a Hawk T1 Jet, in the event that the air ninjas are spotted by the ground samurai during a night bombing. Oh yeah, the blued hands look amazing on the matte black dial and shimmer with the flick of the wrist as it catches the light.

Another plus of this watch is the absence of all but the necessary text: brand name, country of origin, and anti-shock emoji. Even the COSC certification badge of honor is nowhere to be found. Maybe this is an ideology of the English brothers in that COSC certification should be a standard and not a selling point? Nonetheless, I found the minimalism of the dial, especially on a Pilot’s watch, to be refreshing and highly legible. 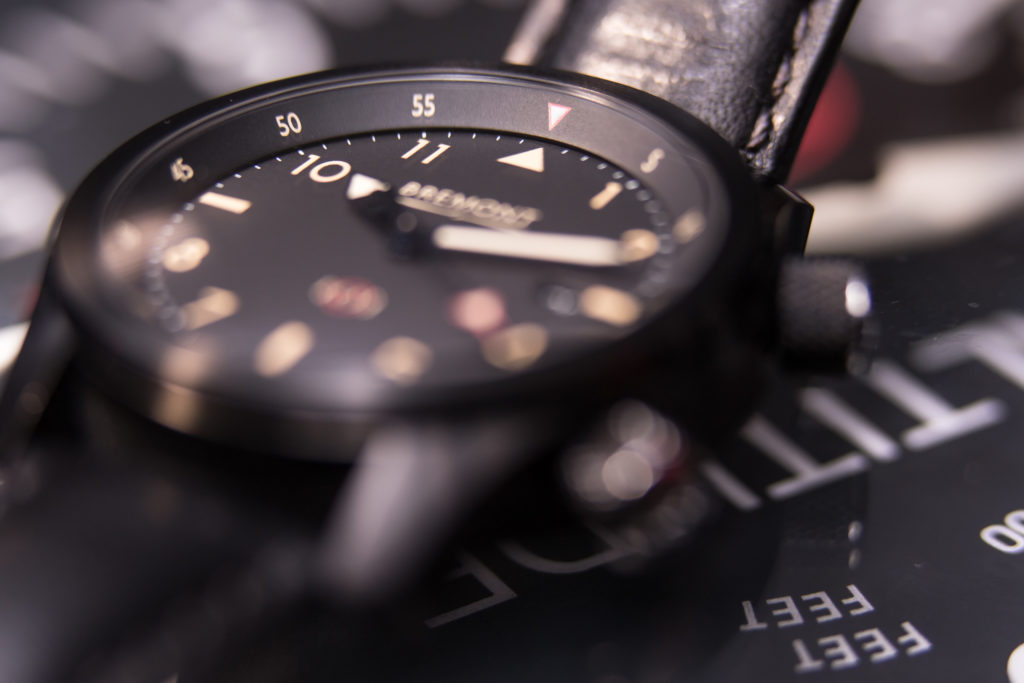 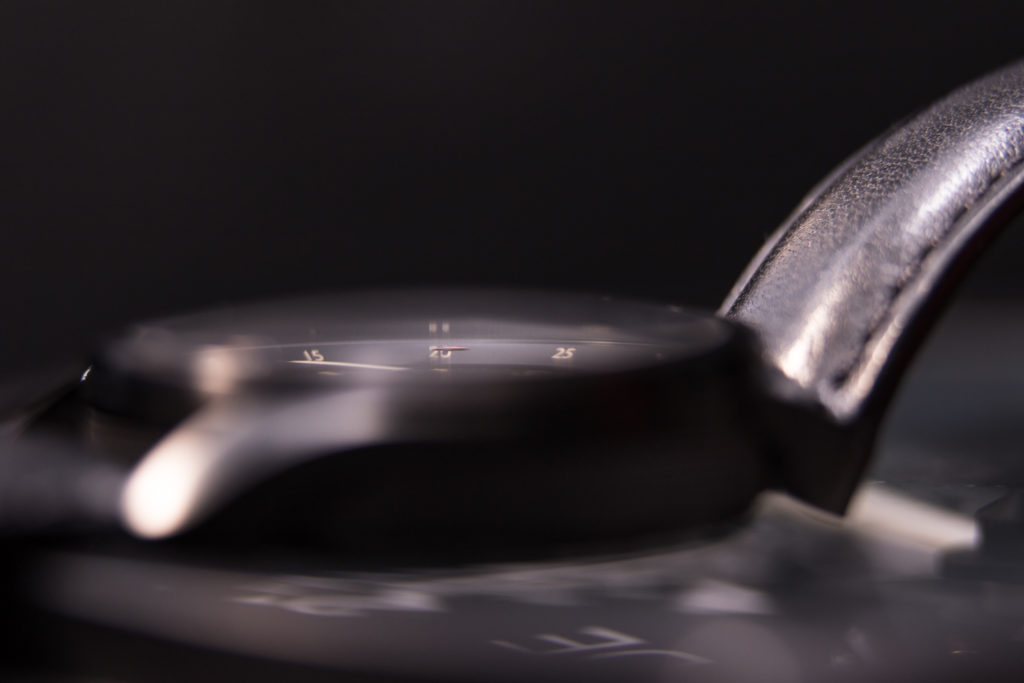 The matte black dial plays backdrop to the P-51 vintage lume on the dial face and the internal bidirectional “Roto-Click” bezel. The print isn’t tack-sharp but it is clear and bold, and alignment is spot on. While I raved about the blued hands above, the white hand lume didn’t match the dial’s vintage lume, and I couldn’t figure out why that decision was made. It would’ve been nice if Bremont had gone the extra mile to match the hands to the dial with the P-51 vintage lume, like its U2/T Limited Edition watch, which had matching lume. 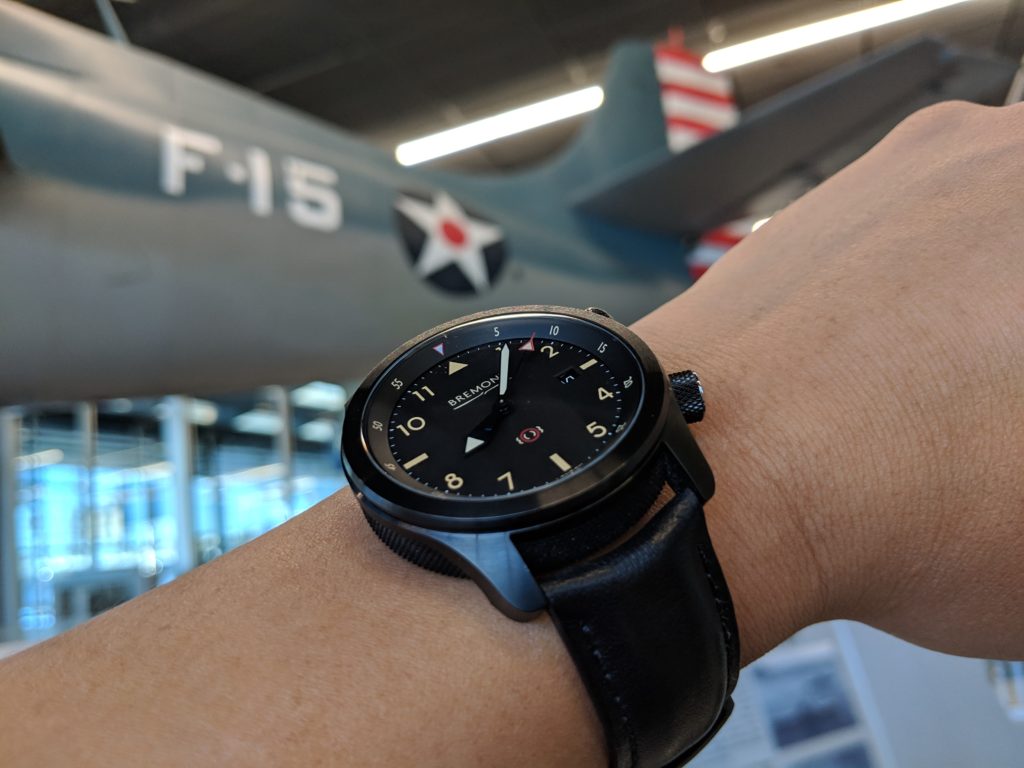 Bremont’s “Roto-Click” Mechanism isn’t as simple a complication as an external dive bezel but is arguably a more aesthetically appealing take on simplicity, form, and function. The internal bezel actuating crown is crisp-feeling from the outside, but the bezel mechanism, while accurate and smooth, lacks the feel of positive engagement when clicking between five-minute intervals. I didn’t get any false clicks, but it didn’t feel as snappy as, say, when scrolling through the date wheel — it’s more like the soft thud you’d get from changing the cities on a world timer. 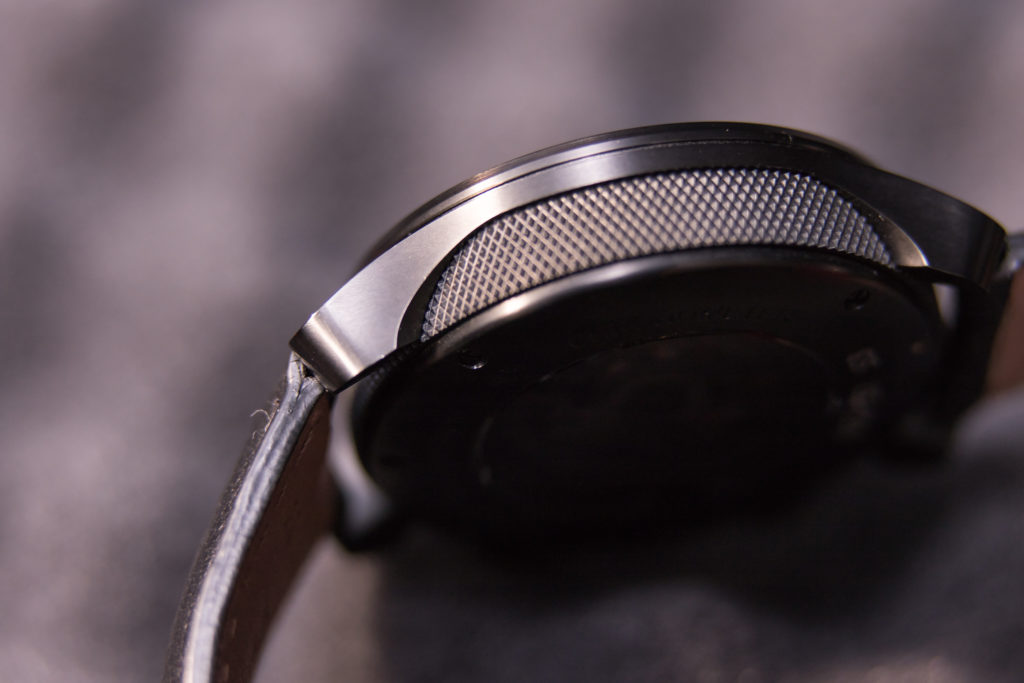 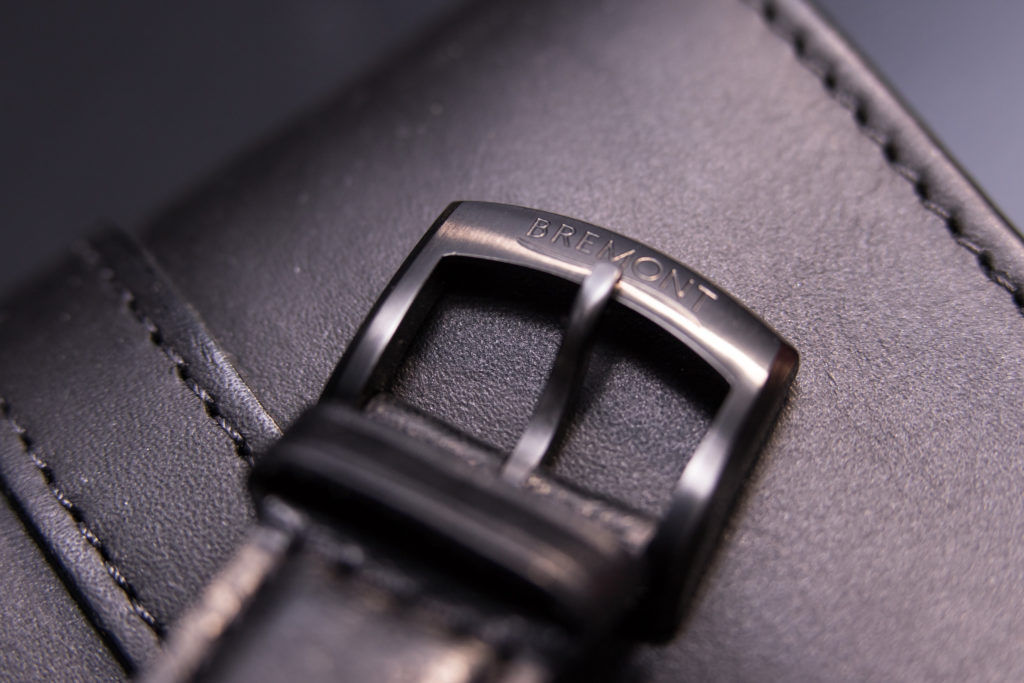 While not a straight-up tool watch or an under-the-radar dress watch, the Bremont U-2/51-Jet accommodates most of your watch-wearing needs by checking off many essentials in an everyday piece. The minimalist look had my eyes searching for clutter when there was none to be found and that ultimately drew my attention to the subtle details of the markers and the dark clarity under the sapphire glass. I guess if I were Eddie Brock and Venom wasn’t my symbiote, I’d pick the Bremont as my second choice — not that he really had a choice, anyway. 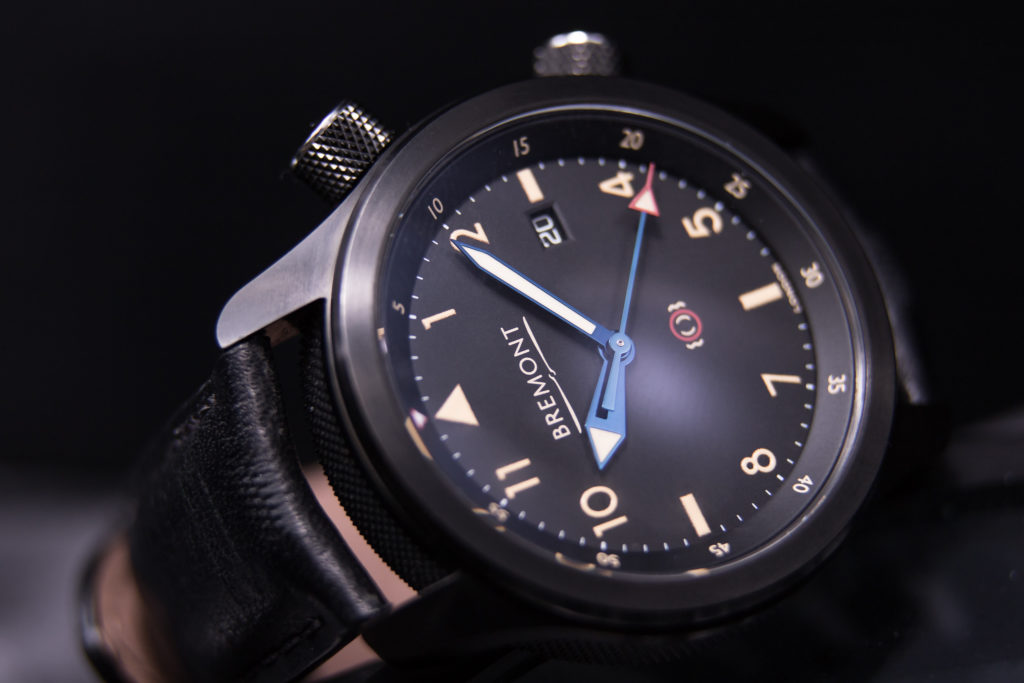