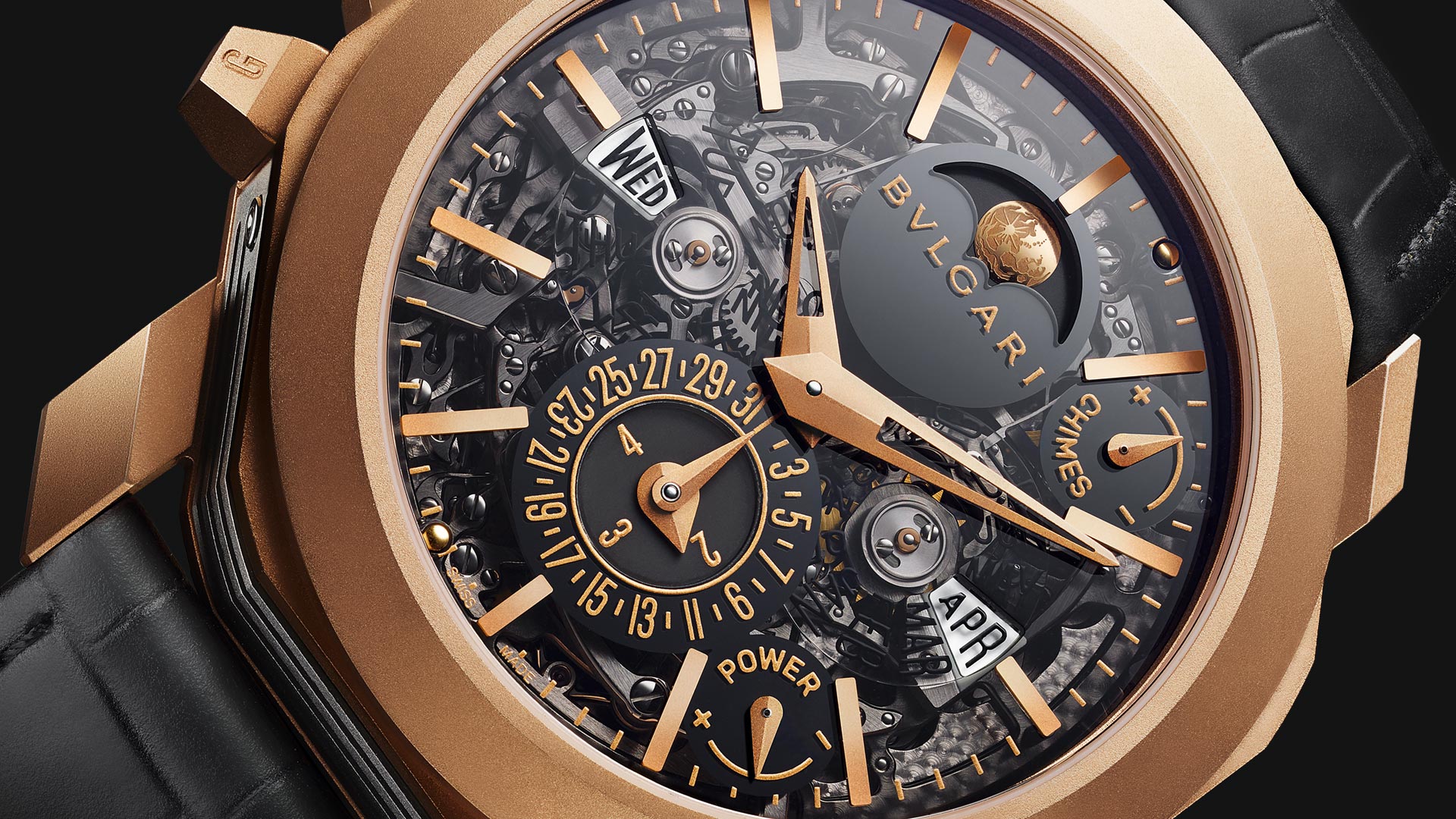 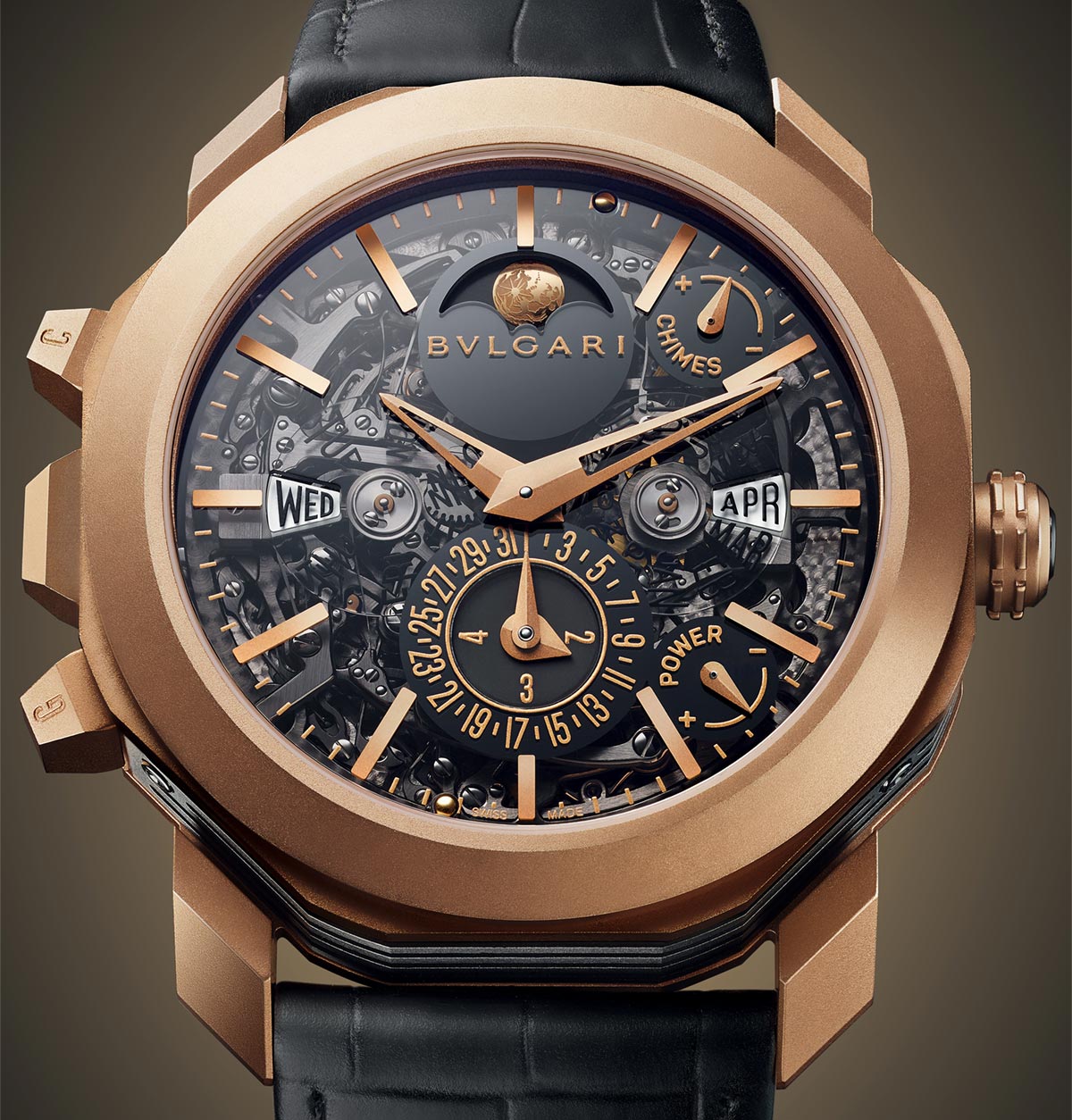 The Bulgari Octo Grande Sonnerie Perpetual Calendar is among the most complicated watches Bulgari has made to date, featuring too many high complications to even fit in its name. Combining both grande and petite sonneries, a minute repeater, tourbillon, perpetual calendar, moon phases, and more, it is a one-off piece that represents the most challenging and prestigious watchmaking techniques. Bulgari particularly emphasizes the difficulty and complexity of the grand sonnerie, more or less calling it the pinnacle of watchmaking, but all these functions integrated with one another and crammed into a familiar Octo case adds up to one uber-complicated watch that most people will not likely even see in person. 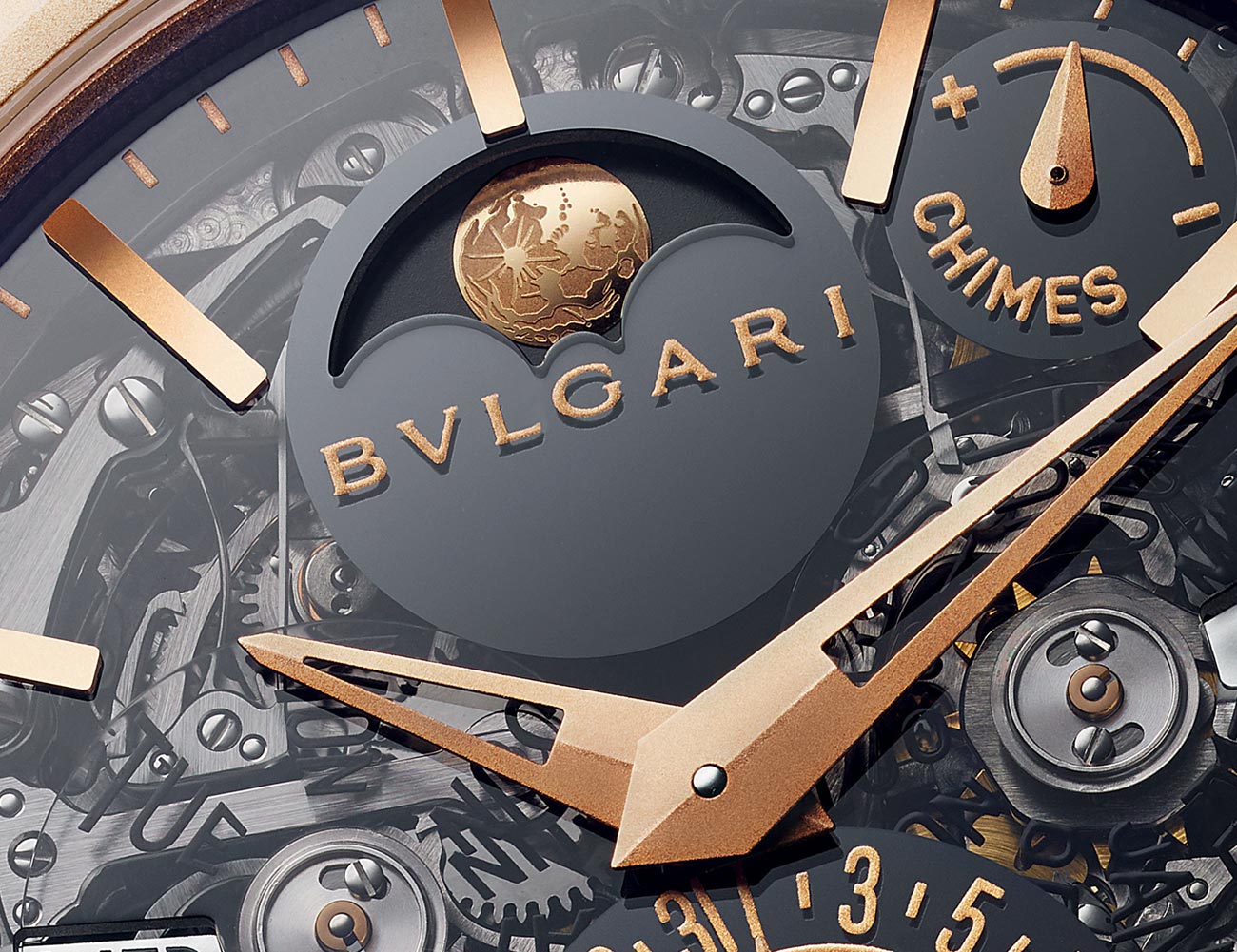 Bulgari actually calls this piece its “most complicated watch ever” in its release, but it is quite similar in terms of its feature list to the Bulgari Daniel Roth Grande Sonnerie Perpetual Calendar released in 2011 and, in fact, shares the same BVL 5307 in-house movement. The 5307 automatic movement uses 923 components with 83 jewels, and the whole watch takes a year to complete, we are told. The movement is visible on both sides through what appears to be a smoked sapphire crystal dial as well as an exhibition caseback – unfortunately and inexplicably, however, Bulgari has not included an image of the caseback, but there are images of the movement from the caseback side of the Bulgari Daniel Roth watch linked to above that will give you an idea of what it will look like. 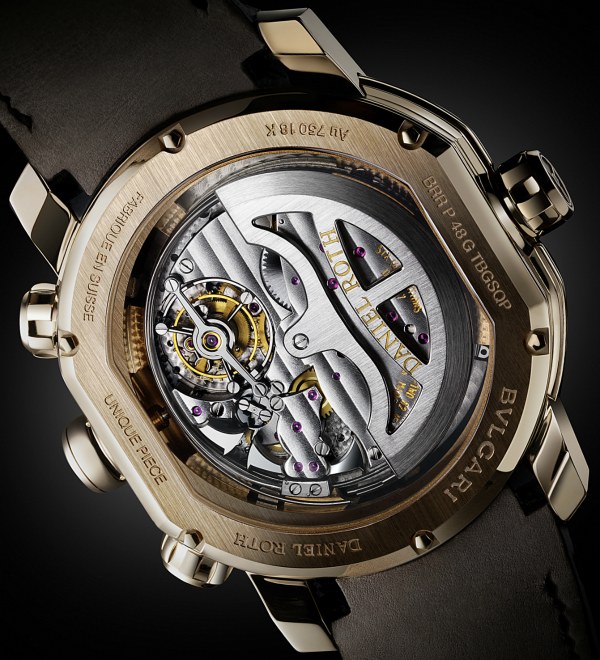 At the caseback is where you will be able to see the tourbillon along with hammers for the chimes, all peeking out from under the winding rotor. It’s interesting that the tourbillon, the horological and visual centerpiece of so many ultra high-end watches, didn’t make it into the name of the watch or even to the front. That perhaps says something about how much else is going on here. Bulgari did a nice job, in my opinion, keeping the design clean and legible despite a lot of information and functions. Smoked sapphire crystal for the dial seems to be a good choice for keeping the movement visible but providing more contrast to keep the time-telling and other displays legible at the same time. 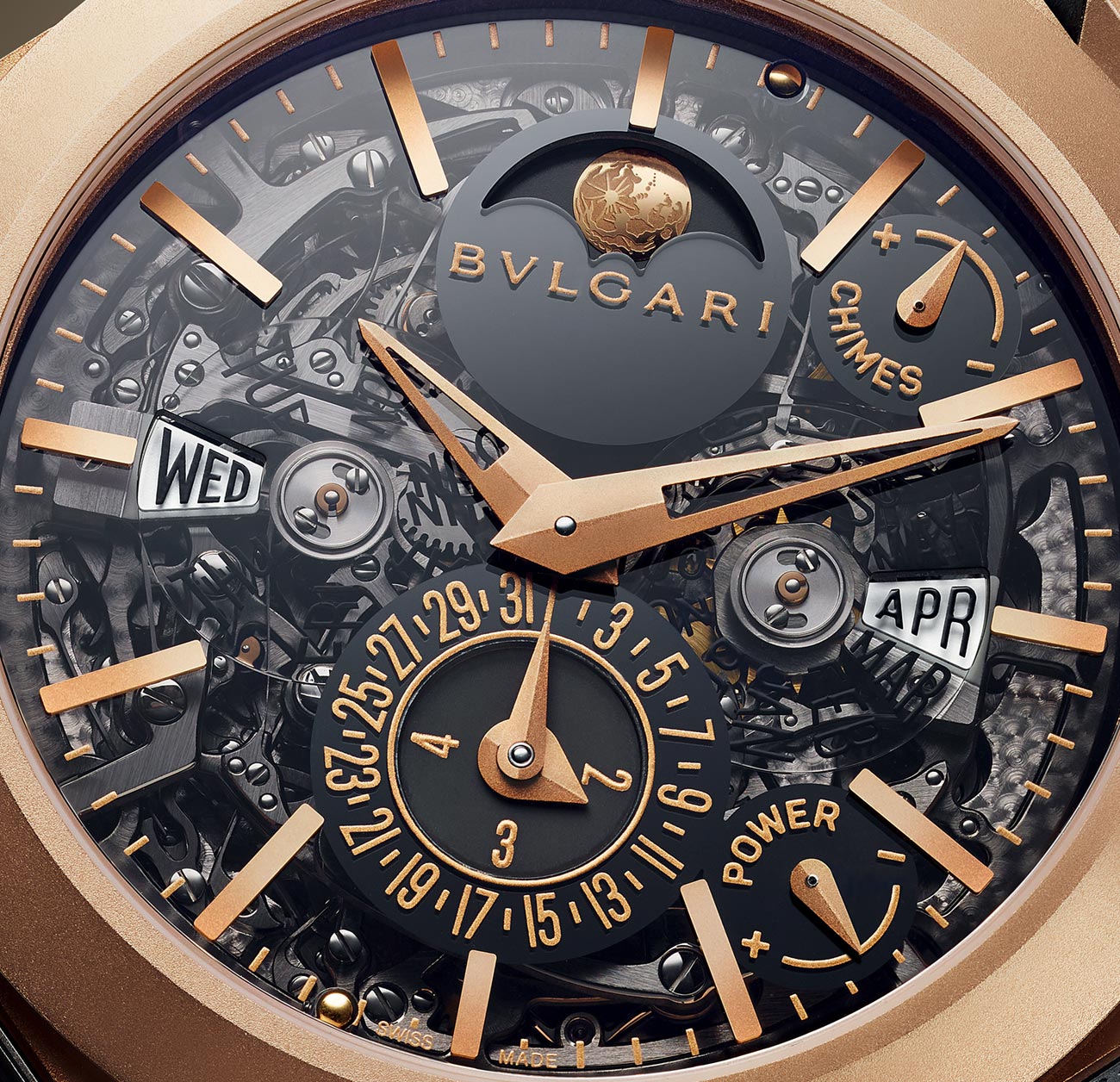 On the dial are displayed the time and perpetual calendar information, meaning date, day of the week, month, leap year, and moon phases, all which will not need adjusting until the year 2100. The day and month indicators are on transparent discs that highlight the current display with a white background. You will also find not one but two power reserve indicators for the chimes at 2:30, which is 28 hours when fully wound and in petite sonnerie mode, and for the rest of the movement at 4:30, which is 48 hours. While the movement and chimes have separate power sources, they are both wound automatically.

The movement and resulting layout of the Bulgari Octo Grande Sonnerie Perpetual Calendar are similar to the Daniel Roth watch from 2011, but its final look is quite different. The Bulgari Octo Grande Sonnerie Perpetual Calendar features a similar 44mm case and look to the Octo Grande Sonnerie watch released last year in 2017, but here its case (30m water-resistant) is in sandblasted 18k rose gold. The brand emphasizes how the case’s architecture has been designed for optimal acoustics. This modern design will probably be more palatable for more people than the eccentric shape of the Daniel Roth case. 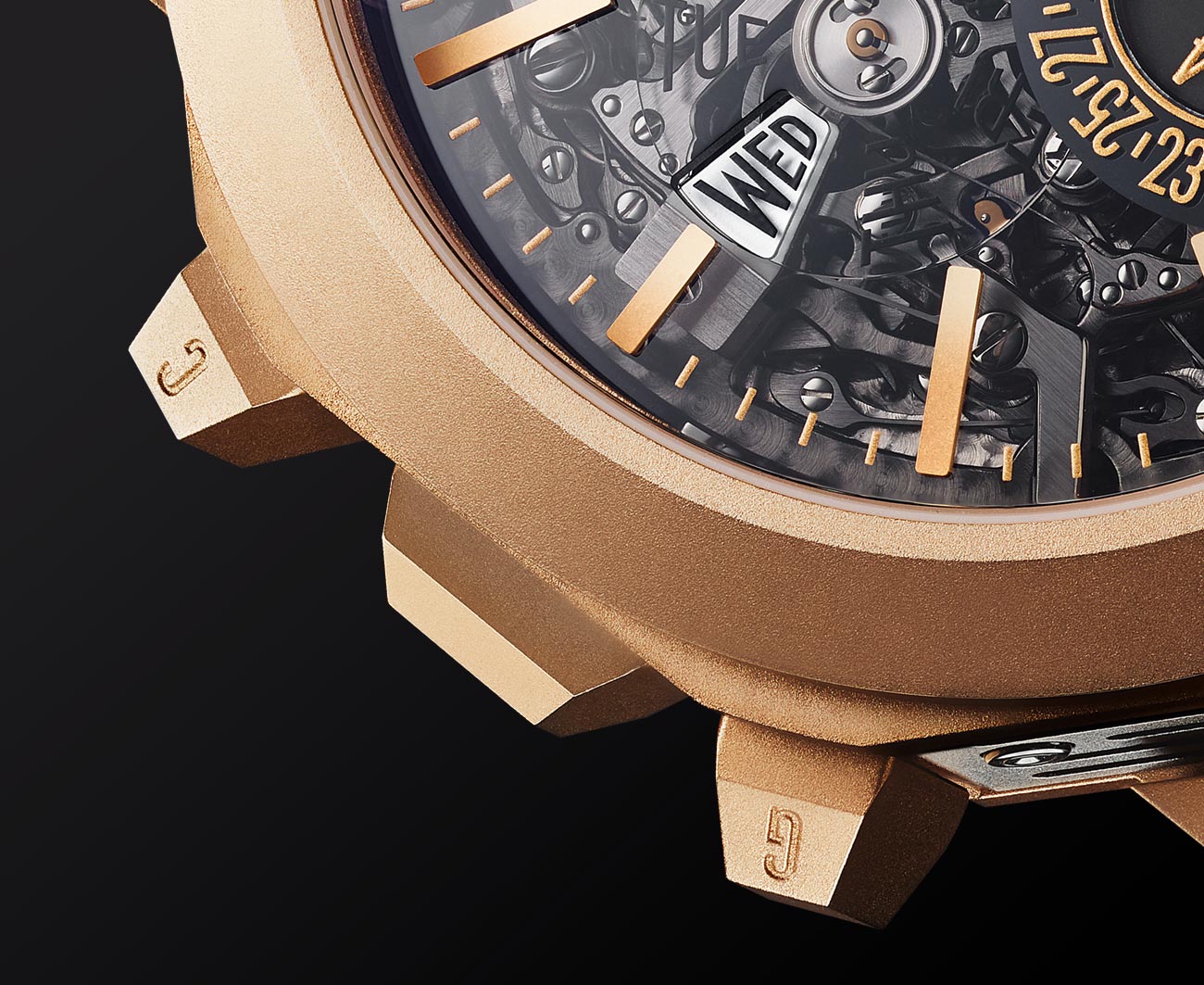 What at first might appear to be pushers on the left side of the case are for controlling and activating the various chiming functions, of which there are several varieties incorporated into the Bulgari Octo Grande Sonnerie Perpetual Calendar. In fact, two of these are like crowns that can be turned, I believe, to select different modes – the one at 8 o’clock toggling between grand and petite mode and the one at 10 o’clock to toggle the silent mode. The pusher in the middle activates the minute repeater. To remind you, a minute repeater strikes the time down to the minutes on demand through the push of a button (here) by the user. Grand and petite sonnerie chimes do not require the user’s interaction and will strike every quarter hour unless you put it on silent mode. The grand sonnerie will sound the full time including the hours every 15 minutes; whereas the petite sonnerie will tell you the time every hour but chime only the quarter hours in between. 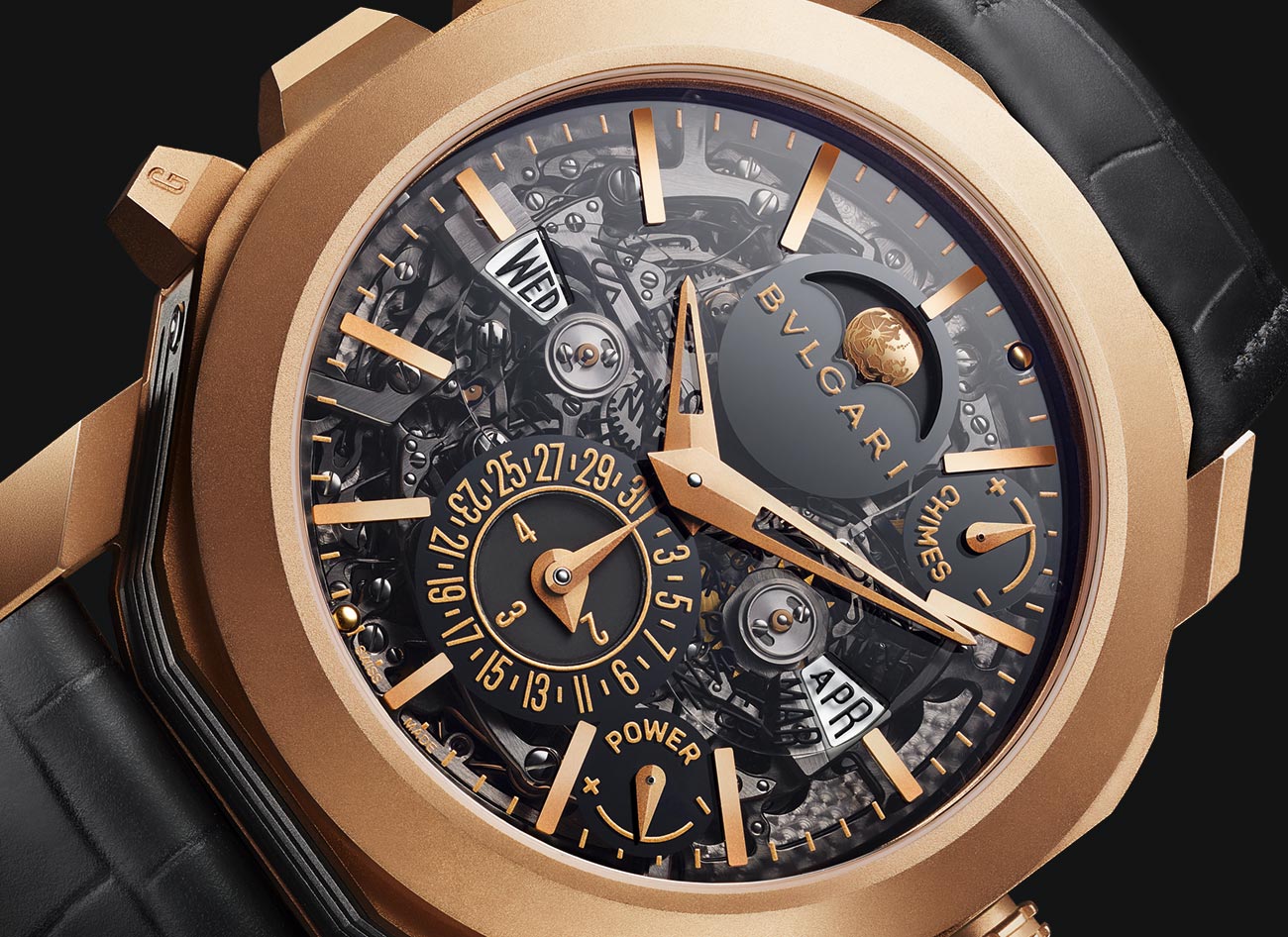 Bulgari counts 22 complications in total – which, while not breaking records like the Vacheron Constantin Reference 57260 pocket watch‘s 33 complications, is still impressive and massively complex. And it all fits on your wrist. This Bulgari Octo Grande Sonnerie Perpetual Calendar may not be breaking new ground in watchmaking or even for the brand, but it helps to remind people, once again, that Bulgari means business and competes among the biggest boys of haute horology. It also functions as a halo product for not only Bulgari but its corporate parent, the LVMH group. Only one example of the Bulgari Octo Grande Sonnerie Perpetual Calendar is being made, so it naturally falls into the “price-upon-request” category and is presumably already sold – but if you must know, its retail price is $708,000. bulgari.com