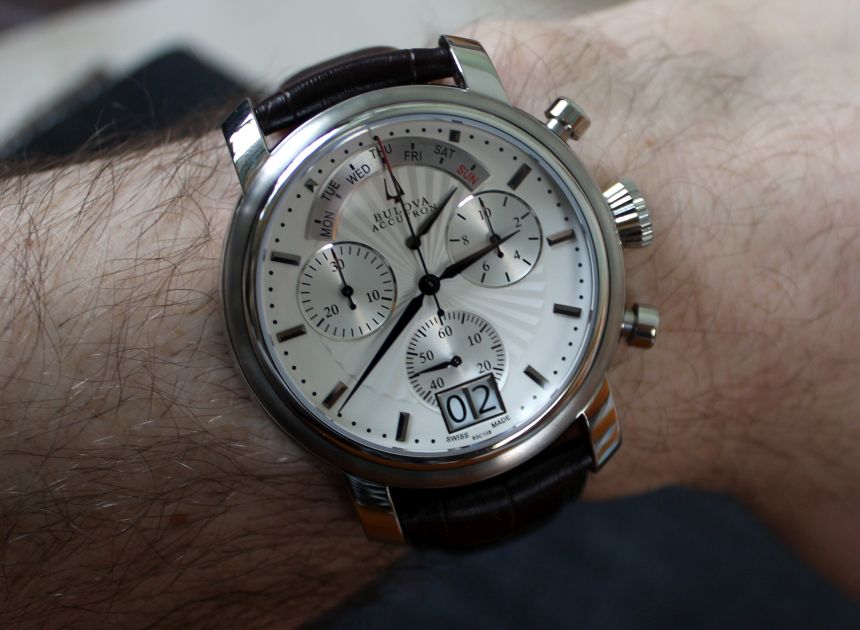 When you think of Bulova, you very likely think of their highly accurate Precisionist line. While those are of interest, today I’d like to focus in on a line that is actually rather storied in their lineup – the Accutron. This is a lineup that first came to be in the 1960’s, and it’s where the tuning fork made it’s entrance, helping to create greater accuracy in the quartz movement. Today, we’ll look at one of the more refined pieces in the current lineup, the Bulova Accutron Amerigo.

The Bulova Accutron Amerigo is a watch that straddles the line between sport (given the inclusion of a chronograph) and dress piece (due to it’s overall styling), though I’d say it leans more to the dress side of that particular spectrum. When I first got this watch in, there were two things that immediately struck me with the dial. First, there’s that three-dimensional sunburst (or paper fan) pattern in the center of the dial. Given how it’s raised up from the outer edge of the dial (where the indices are applied), this gives a great bit of texture that, owing to it’s 3D nature, catches light and shadows in different ways. 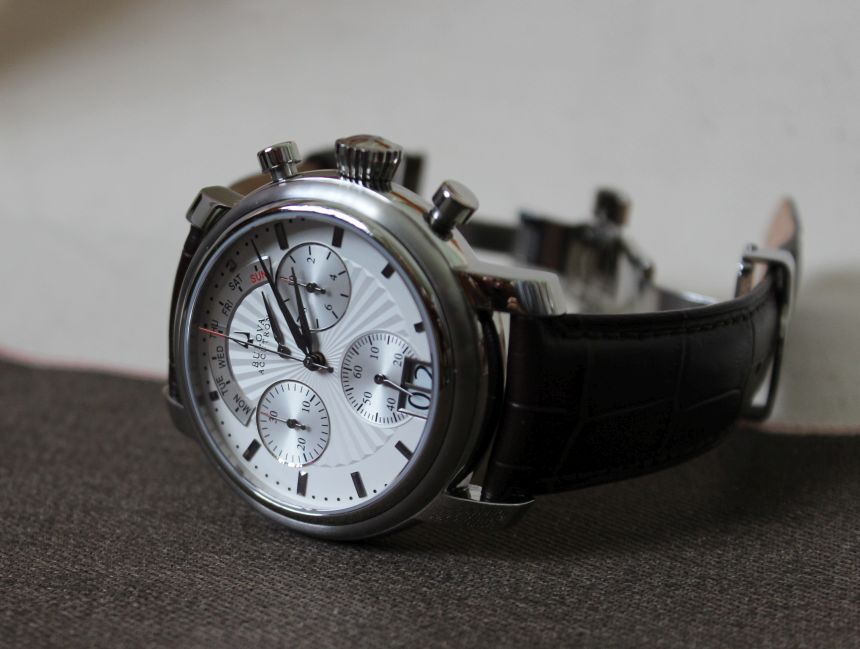 The next most predominant feature of the dial is the day of week register, up at the top of the dial. When I’ve reviewed watches that rely on a hand to indicate the day, they’re more commonly a small subdial, which can be a little difficult to read. Here, on the Bulova Accutron Amerigo, we’ve got a retrograde-style display, where the days are very easy to read out. I will admit, I was a little unsure of this bit of styling at first, but it’s functionality won me over. As an added nicety, the hand used for this register mimics the shape we see in the main handset, which helps to unify things.

That leaves us with the rest of the dial. Down at 6 o’clock, we’ve got a large date display nestled into the small seconds register. This does give an odd look to the register (with it being partially missing), but I think it’s a reasonable compromise in the layout, given that anything else would have looked odd, or required a much larger case. And with that large date display, again, it’s functionality is appreciated just as with the day of week register. Sure, it tells the same information as a regular date window, but it’s much simpler to read the date off quickly. 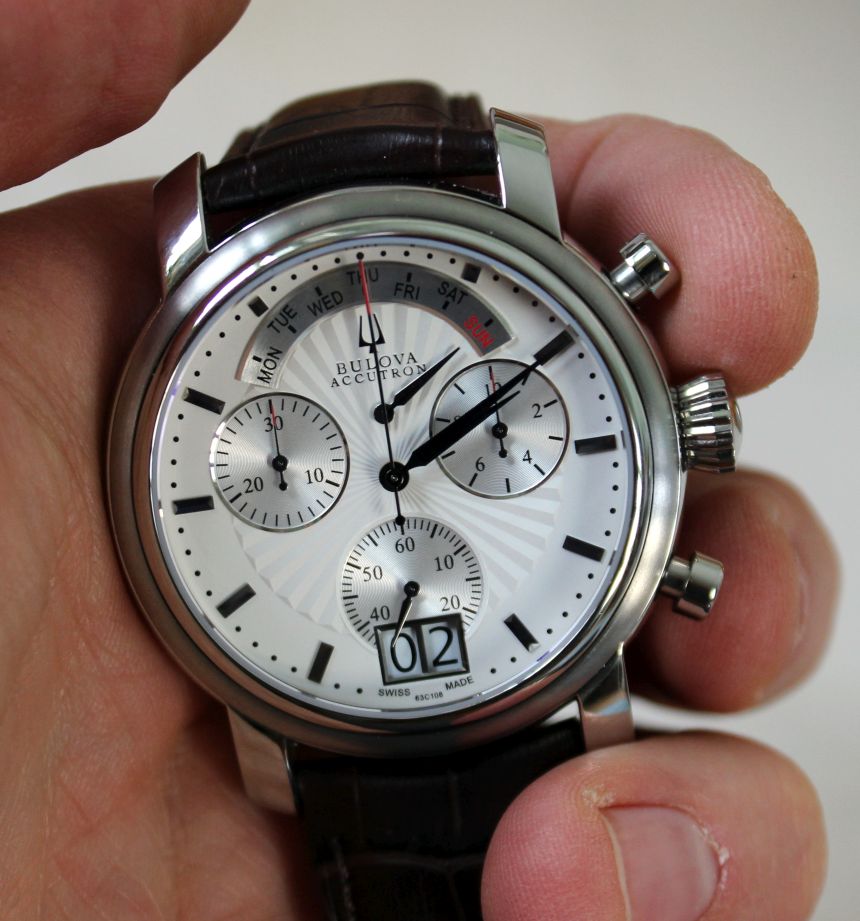 Rounding out the remainder, we’ve got the chronograph registers – a 30 minute counter is over between 9 and 10 o’clock, and the other register (between 2 and 3 o’clock) marks out the tenths (1/10) of a second. This, of course, is a nod to the accuracy Bulova is known for building into their quartz watches. Yes, it’s not the 1/1000 scale we can get from an Precisionist, but it’s still impressive for a watch to have this. I will say that, at first, this layout (with the registers not right at 9 and 3) felt weird.

When you take the dial as a whole, though, you can see that things are placed in a way that makes it look and feel about as balanced as it could be. Obviously, the movement dictates some of where things need to be placed, and ultimately, I think Bulova gave us something that’s just a little bit different than the norm, to good effect. 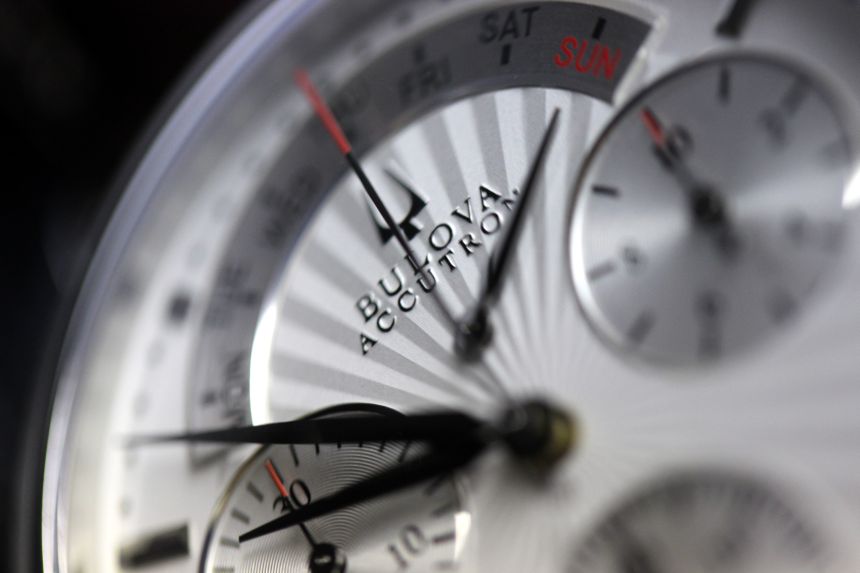 Though the dial itself is matte, there are plenty of polished surfaces within the dial to catch the light (the handset, rings around the chrono registers, indices, etc). This same motif carries over onto the finish of the stainless steel case. While it’s predominantly polished, there is a brushed finish ring near the top of the case. I like this, as it helps tone things down, and helps you keep from blinding yourself when you check the time when you’re out in the sunlight (the domed and AR-coated sapphire crystal helps in that regard as well).

The lugs on the case are longer, and have a nice bit of curve to them, helping to keep the Bulova Accutron Amerigo set closer on your wrist. Bulova also has included a curve in the strap (and, one assumes, the spring bars), which keeps the gap between the case and strap nice and even. The strap itself is decent, a brown leather embossed with a croc pattern; it does exhibit some creakiness in between the lugs. Closing off the strap we have a signed deployant clasp. 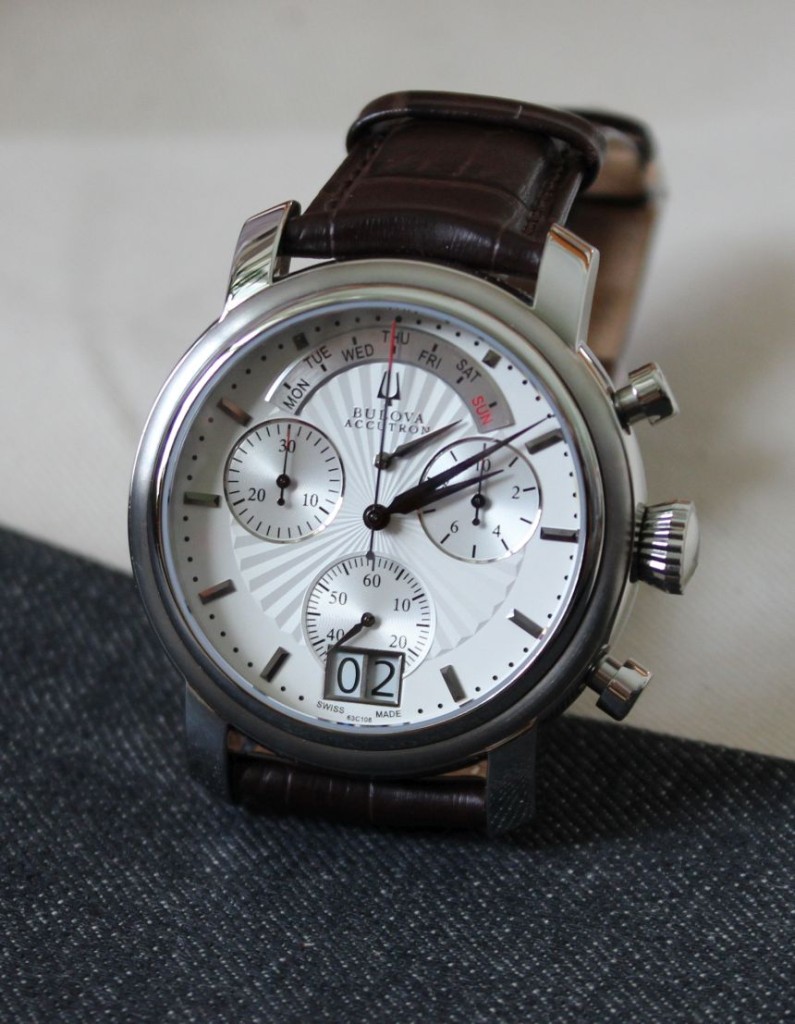 All told, this was one of my favorites of the several Bulova models that were sent over for review. This was largely due to the mix of color and styling, which I felt went for a sort of retro-modern feel. While the Bulova Accutron Amerigo might feel out of place in a more casual setting, I think it works well for the office, or even if you happen to throw on a jacket headed out to dinner. It’s when you get to the asking price (see note below) that you hit the biggest stumbling block for me with the Bulova Accutron Amerigo. While I like the overall styling, the price just feels high to me, even for a chronograph complication added to the quartz movement. That aside, the Bulova Accutron Amerigo has a lot going for it, including a clean and compact layout.  bulova.com

>Brand: Bulova
>Model: Accutron Amerigo (ref 63C108)
>Price: The Accutron Amerigo is no longer available
>Would reviewer personally wear it: Yes, I would – the Bulova Accutron Amerigo can quite easily fill the slot of a brown dress watch, either for the office or with a suit.
>Friend we’d recommend it to first: The buddy who’s looking for a dressier piece to pair up with their khakis, with a bit of a technical wizardry thrown in.
>Worst characteristic of watch: The details around the day and date displays are a bit off-putting at first.
>Best characteristic of watch: Though things are not in the standard configuration, we’ve got a compact and, ultimately, balanced layout to this dial, with plenty of information being presented in very readable fashion.