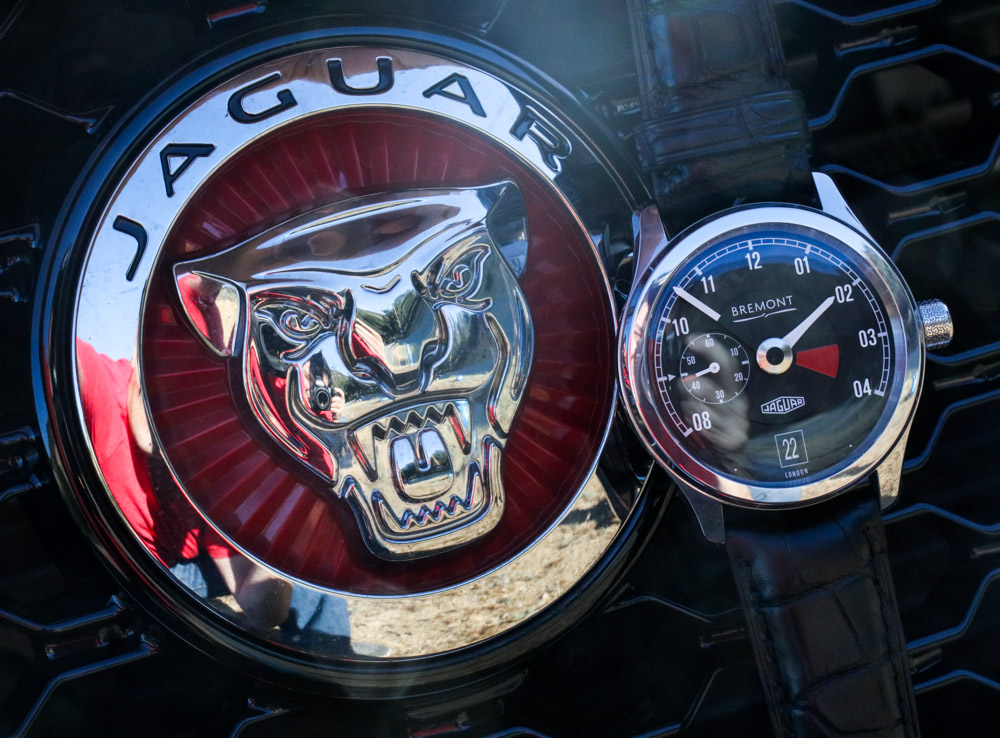 I had an interesting mental moment recently when cruising around in Jaguar’s XJ – their flagship all-purpose sedan – while wearing the Bremont Jaguar MkI timepiece. The car has one of those all-digital screen instrument panels, while the timepiece’s dial is of course all analog. Trends like that are common in high-end cars where electronics have been embraced. Alternatively, in timepieces, high-tech – at least when luxury is often concerned – is shunned. 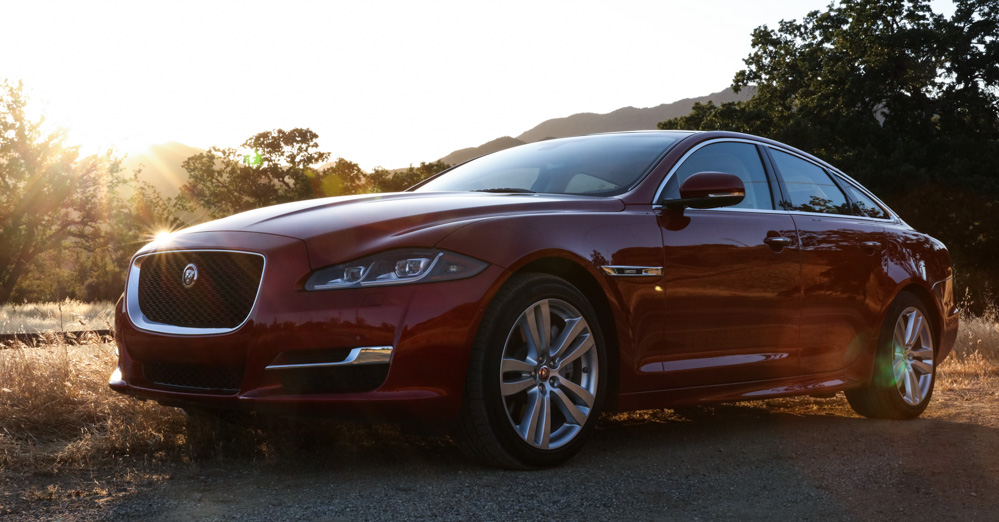 And yet, here are two contemporary tools for aficionados that weave both classical and modern elements together in order to add beauty and some charm to otherwise routine lives. Isn’t that really the goal of most of the “cool stuff” we buy? Our ongoing search is for those items that make us see as much beauty as possible, and experience as much charm as we need in order to give our travels through life (both physical and temporal) the necessary character to make our existence interesting and meaningful.

What these two watches have in common is design oversight by Ian Callum. The head of design at Jaguar (who oversaw the current XJ model design from around 2005 until its release in 2010), Callum has been working with England’s Bremont watches over the last few years. I don’t know if you’d call him the creative director behind the watches (that is Bremont’s job), but I can promise you he gave a good deal of design feedback and the watches probably would not have been green-lighted without Callum’s seal of approval. 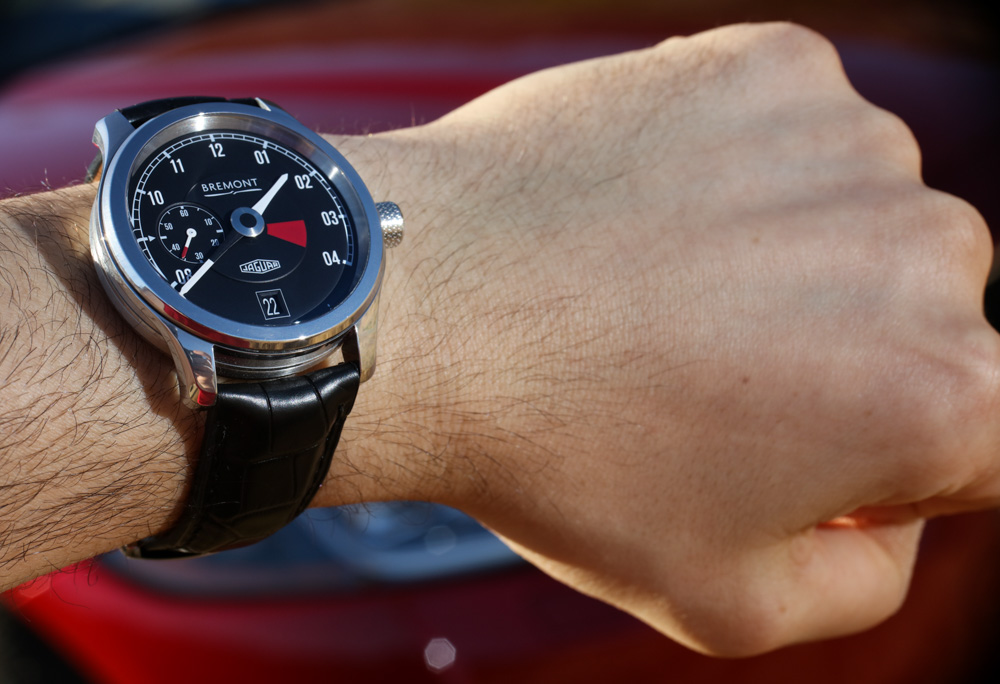 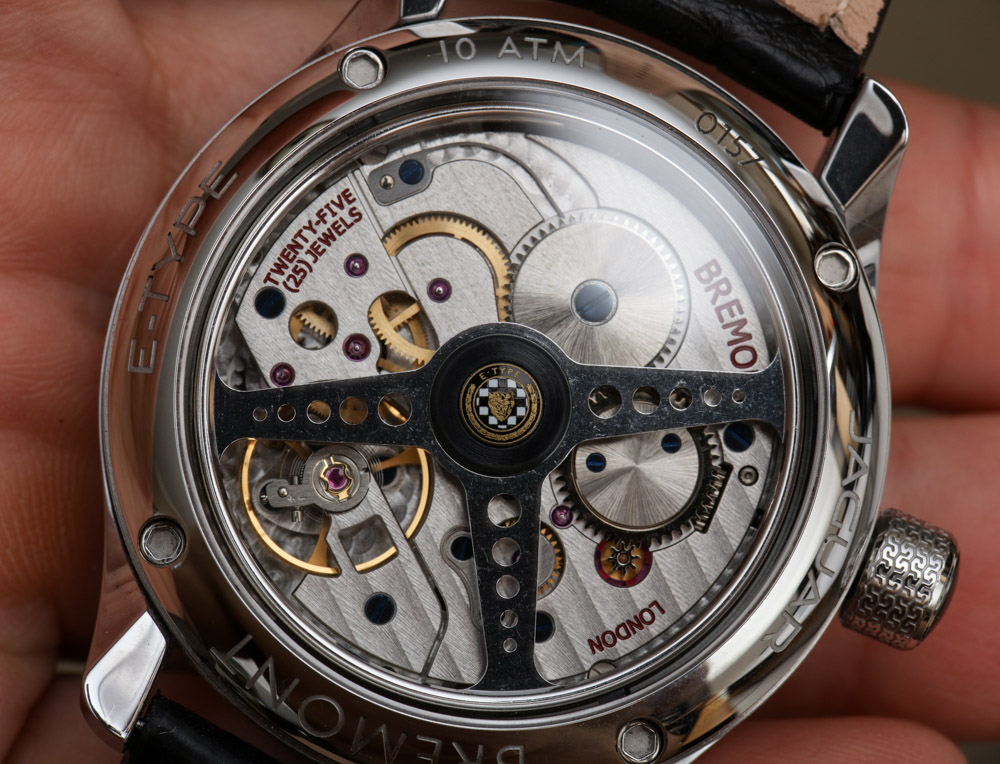 Their first official timepiece launch together was the forefather of the Bremont Jaguar MkI, being the limited edition Bremont Lightweight E-Type Chronometer for Jaguar in 2014. The watch was linked to the release of a handful of six 1960s-era Jaguar Lightweight E-Type cars that Jaguar never finished producing as a promised set of 18. As a nod to collectors, Jaguar actually produced the final six cars by hand to retro standards at a price of over $1.6 million each. Each of the Lightweight E-Type cars had an accompanying Bremont watch with a number matching the VIN and was produced in 18k white gold. It reportedly had a price of about $40,000, and I think each of the car buyers reserved one. 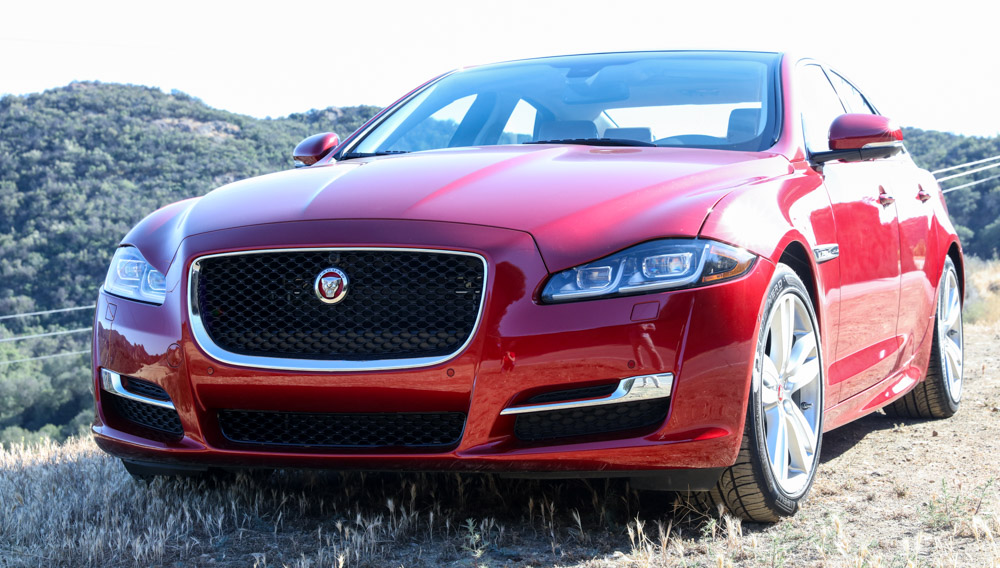 A year later in 2015, Bremont officially debuted its Jaguar watch collection with the Bremont Jaguar MkI and MkII, and later the more accessibly priced Bremont Jaguar MkIII. Each of the watches bore the more historic Jaguar logo on the dial, even though the car maker’s modern logo is engraved into the rear of the case. Moreover, the watches all (currently) come only in steel cases. The flagship model is currently this Bremont Jaguar MkI, and it contains a movement with parts produced both locally by Bremont and by noted Swiss watch movement maker La Joux-Perret. 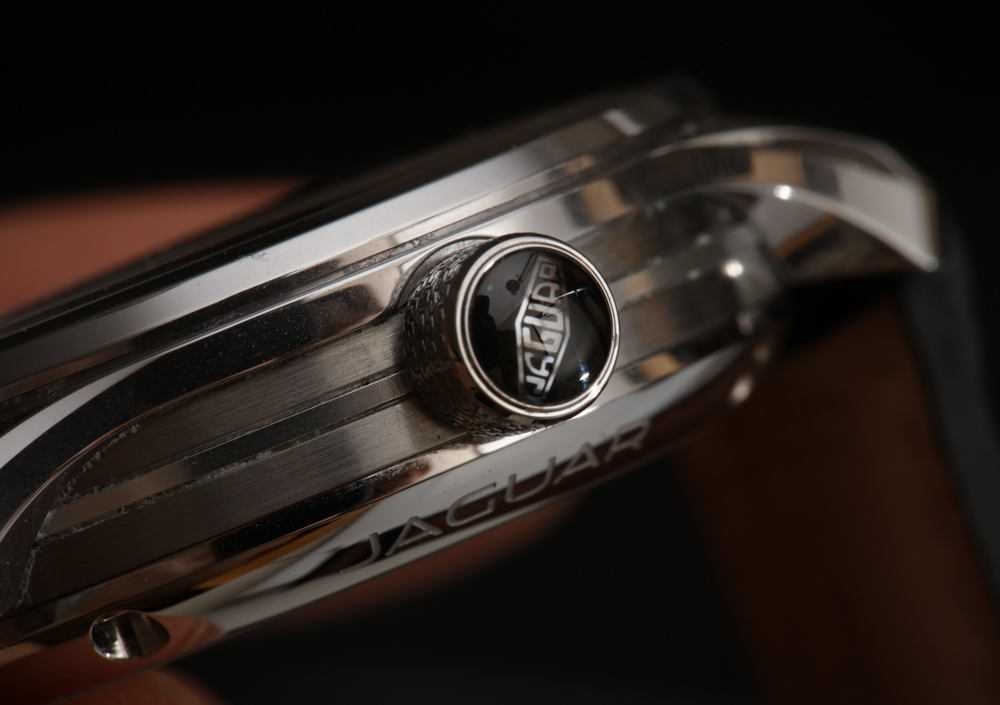 The watch case itself and other parts are produced by Bremont in England. Similarly, Jaguar produces each XJ automobile not terribly far away in Birmingham. I decided to review these items together (car and watch) as an experiment. The Bremont Jaguar MkI timepiece is inspired by the 1960s E-Type roadster, and X351-style Jaguar XJ was released prior to the brands having any type of relationship. I wanted to see how the car and watch went together as a test of the relationship. Further, I wanted an excuse to drive a luxo-sedan – a genre of vehicle I find most endearing – probably because most of my driving is L.A. driving.

Writing a full car review and watch review together is outside the scope of any single article on aBlogtoWatch. What I try to do in these articles is offer a taste of the car while trying to focus more on the timepiece review. With that said, I am a real car guy and want to do the passion many people share for both watches and cars justice when reviewing both types of products. 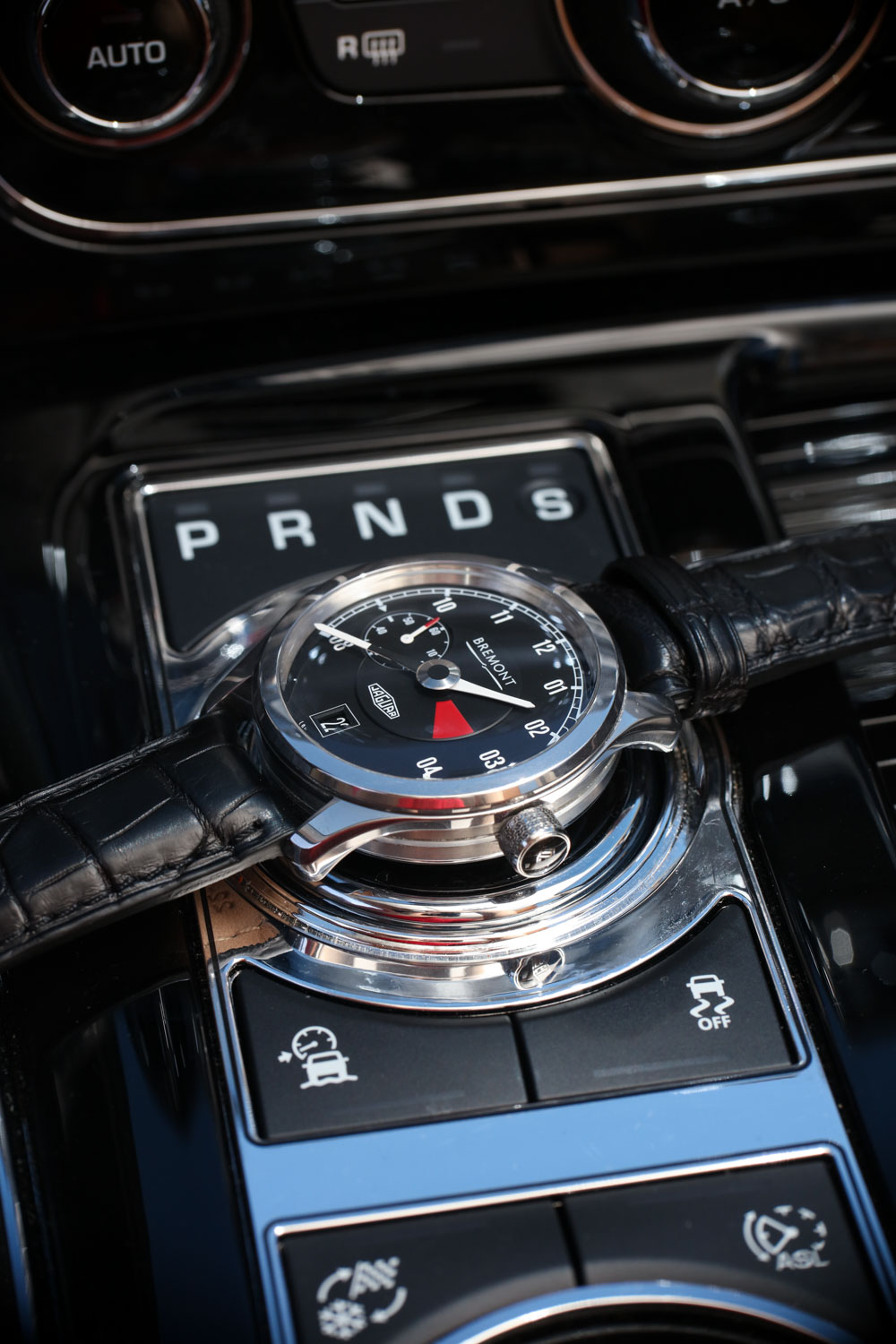 It was years ago in San Francisco prior to the release of this current body style XJ that I first experienced this design language in the new XF. My enduring thoughts were on how odd the “turning knob”-style gear seemed at the time. I still don’t know if I am sold on this means of gear selection some years later, but it no longer seems as odd to me. The Jaguar XJ, even as an aging platform, is still a gorgeous-looking car with a competent ride and admirable handling. It’s due for replacement soon, but I have a feeling the essential look that made the current generation Jaguar XJ so spectacular isn’t going to really go away.

Depending on where you live, various versions of the Jaguar XJ are available. For the most part, people will be selecting a XJ, but there is also the longer XJL – which is about five inches longer, providing for more spacious rear leg room. In the United States, Jaguar offers (aside from more specialty sport models) the 340 hp 3.0-liter supercharged V6 or the 550hp 5.0-liter supercharged V8. This car s the XJ R-Sport AWD with the six-cylinder, but it impressed me. Only the appreciably more expensive XJR comes with the eight-cylinder engine. 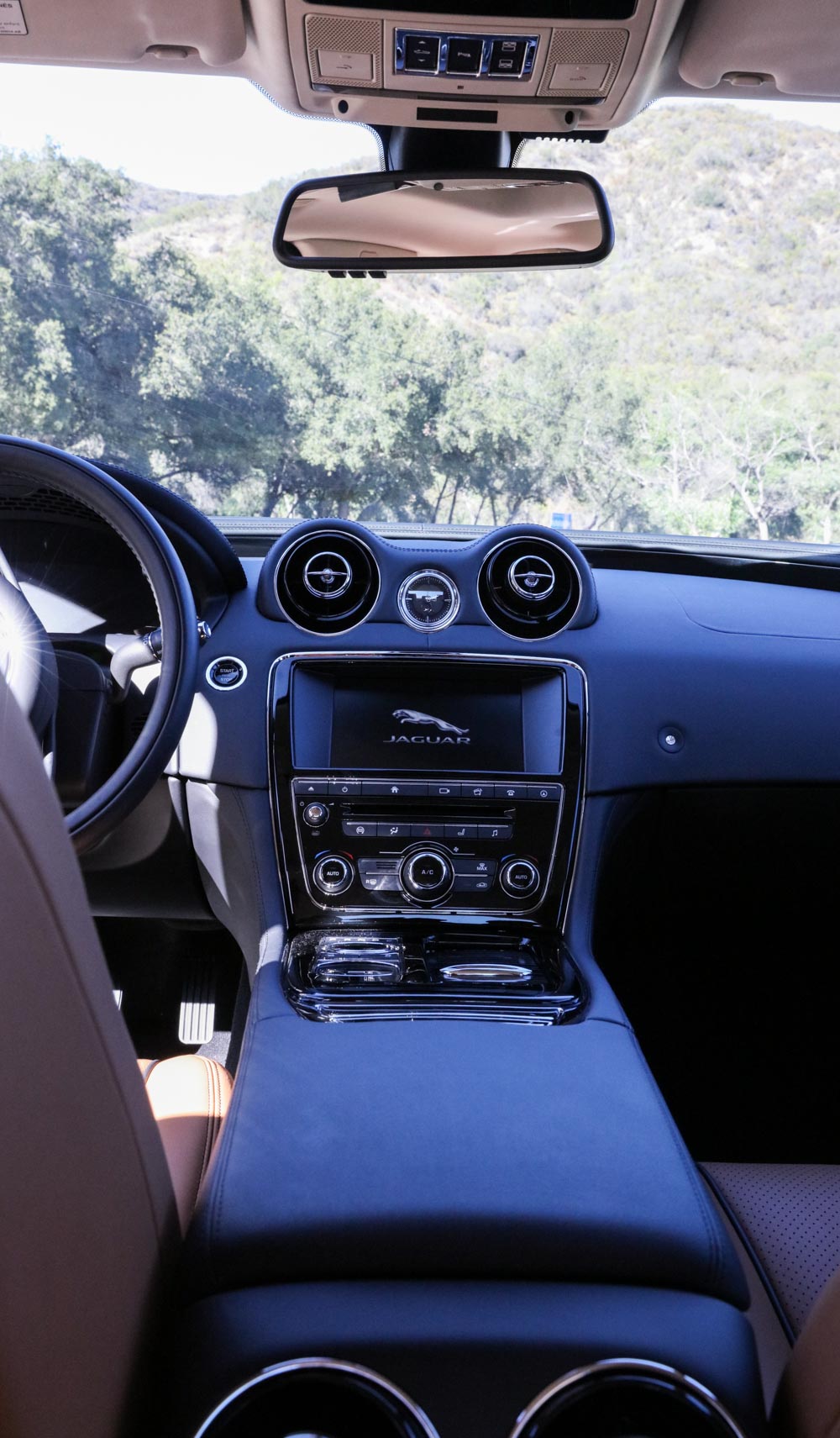 A note about the engine performance, since these things matter to us. Typically, I’d be a snob and shun the V6 in a vehicle like this, but that would actually be a mistake in this situation. I’d say that the V6 isn’t what you might suspect as a tolerable “budget alternative” to the V8, but rather an arguably more suitable daily driving option to the thirstier (and burlier) bigger engine. I haven’t driven the V8 XJR, but I’ve consulted with people who have, and I’ve also driven similarly sized cars with similarly powered engines. At 550 hp the supercharged V8 is going to have power for days and a lot of kick off the line. It’s going to beam the Jaguar XJ to 100 mph before you can even properly steady the wheel. It’s more than enough passing power, and really only “necessary” if you are among the most aggressive of drivers.

Also, the V8 isn’t quieter than the V6 with is audible supercharger. Sometimes car makers like to put a massive, naturally aspirated engine in a car like this to get a smooth, hard pull from the engine as you depress the gas pedal. Thanks to the demanding superchargers, both the V6 and V8 engines are totally rev-happy, and with the 8-Speed transmission (which I found to be very refined, let me add) are able to distribute power well. But I’ll say again, they certainly like to rev. That’s not a bad thing, but it makes the car feel a bit more eager than the driver at times. Mind you, this is an Jaguar XJ, not an F-Type. In London a few months ago, David Bredan and I visited the Bremont watch making facilities and asked for a Jaguar F-Type R to do it in. If you want to play with an over-excited V8 engine that is the vehicle for it (and we certainly did our duty to car guys everywhere by doing so).