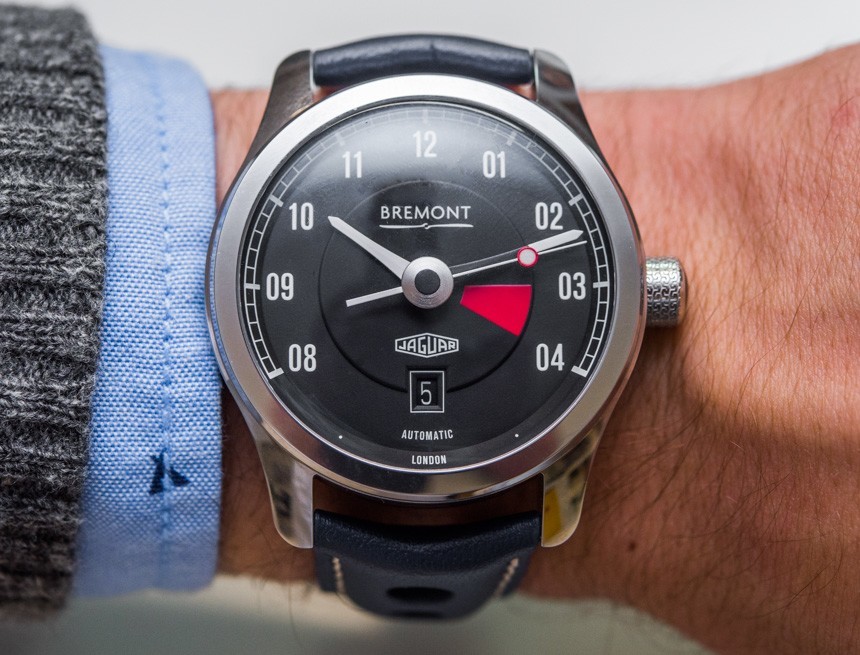 Bremont London has just announced a new “entry-level” model in their Bremont Jaguar watch collection known as the “Jaguar MKIII.” This new automotive-themed timepiece follows the quite popular Jaguar MKI and MKII watch models that aBlogtoWatch debuted earlier in 2015 here. The Bremont Jaguar MKIII will have a slightly slimmer case and a simpler three-hand automatic movement. In some ways, it is the most simple and refined Bremont Jaguar watch yet. 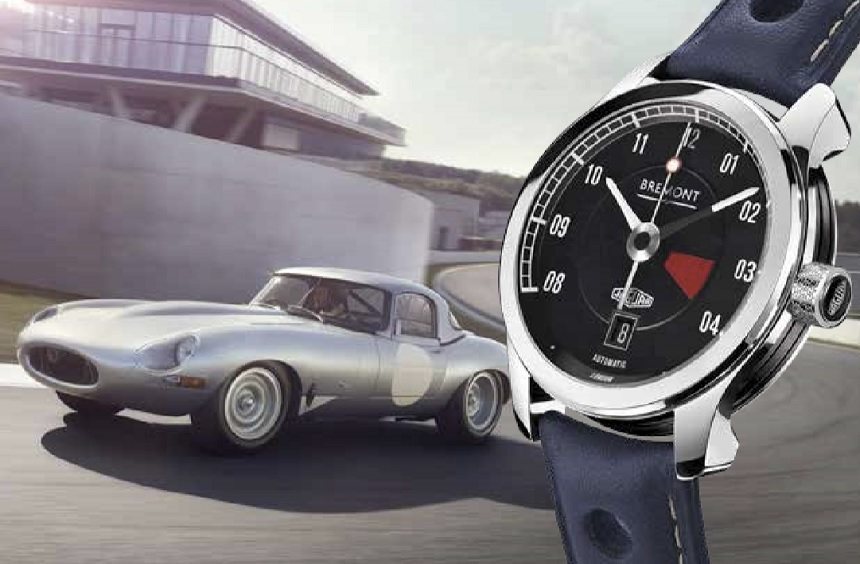 Bremont’s relationship with also-English Jaguar began several years ago and solidified as Bremont formed a close relationship with Jaguar’s head of design Ian Callum (who is a great guy to chat with). In 2014, Bremont unveiled a limited edition version of the Jaguar MKI which kicked-off this collection, known as the “Bremont Lightweight E-Type Chronometer,” that went with a very exclusive set of newly produced Jaguar Lightweight E-Type cars that were supposed to have been completed in the early 1960s. Bremont produced a single watch for each of the cars in an 18k white gold case. 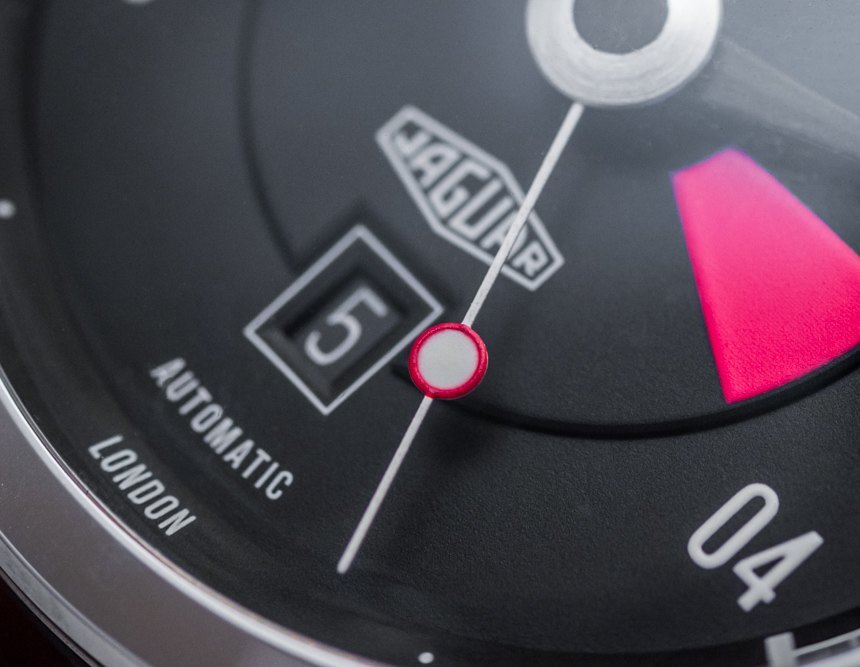 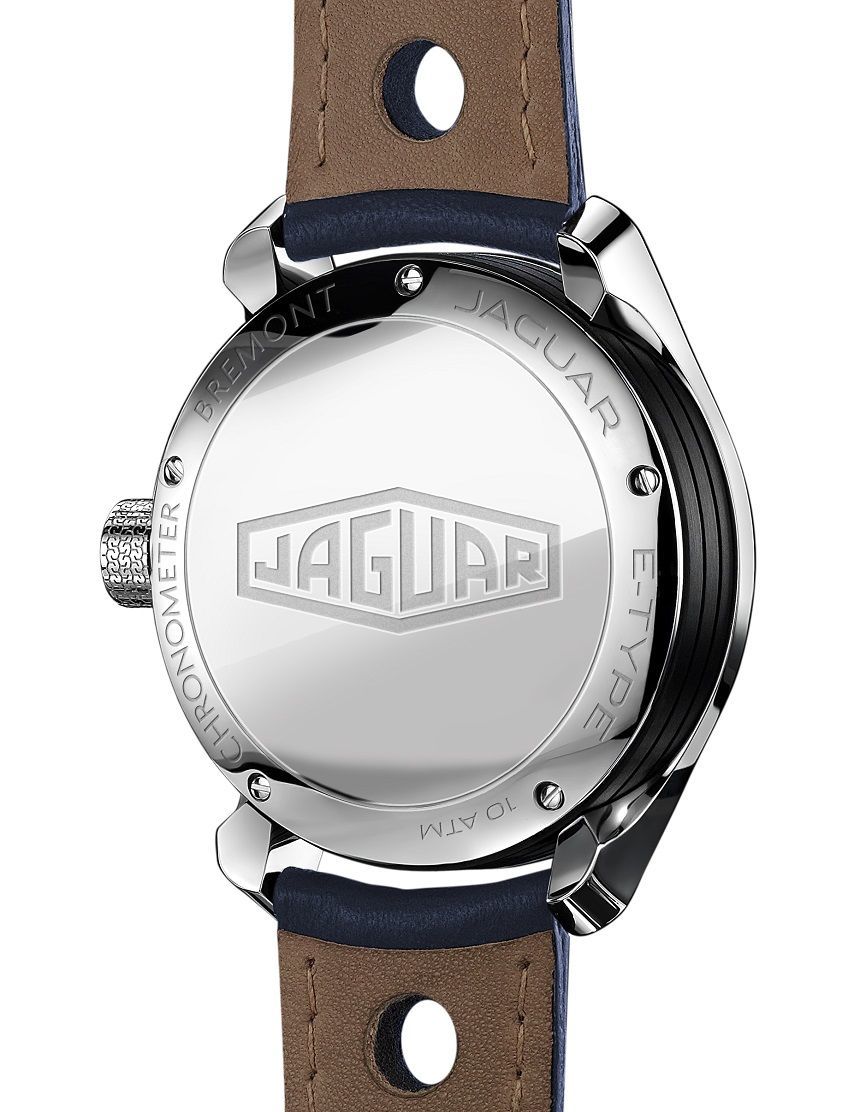 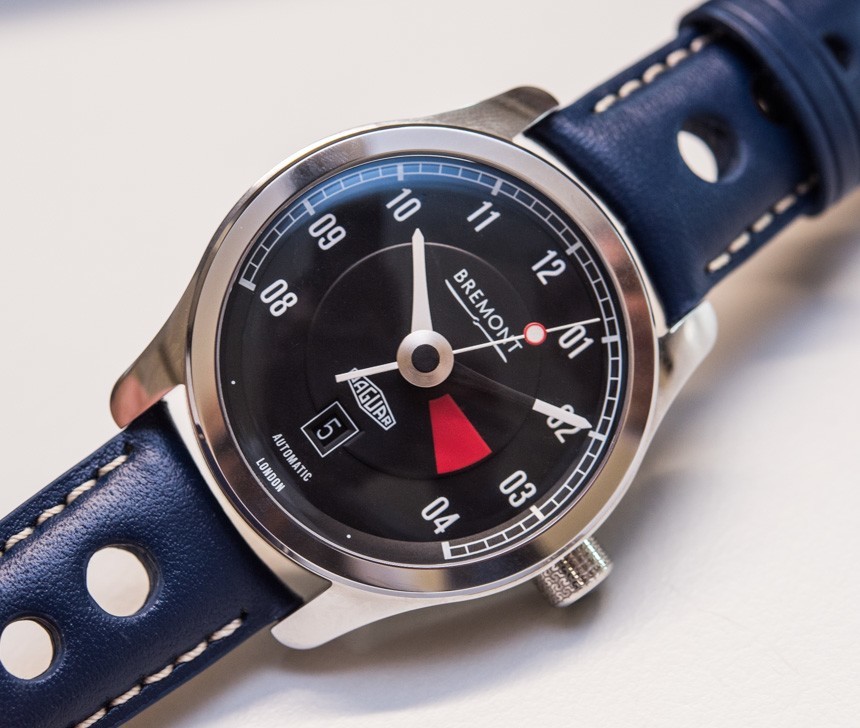 In this article, you’ll see hands-on images of the Bremont Jaguar MKIII watch as well as a picture of the MKII in Bremont’s own original 1960s Jaguar E-Type, where you can see the clear inspiration from the dashboard instruments. Like the MKI and MKII watches, the Bremont Jaguar MKIII comes in a 43mm-wide hardened steel case. The Bremont Jaguar MKIII is also a bit slimmer than the other Bremont Jaguar watches at 13.85mm thick, which gives it a more sleek profile on the wrist. The case has a domed sapphire crystal over the dial and is water resistant to 100 meters. 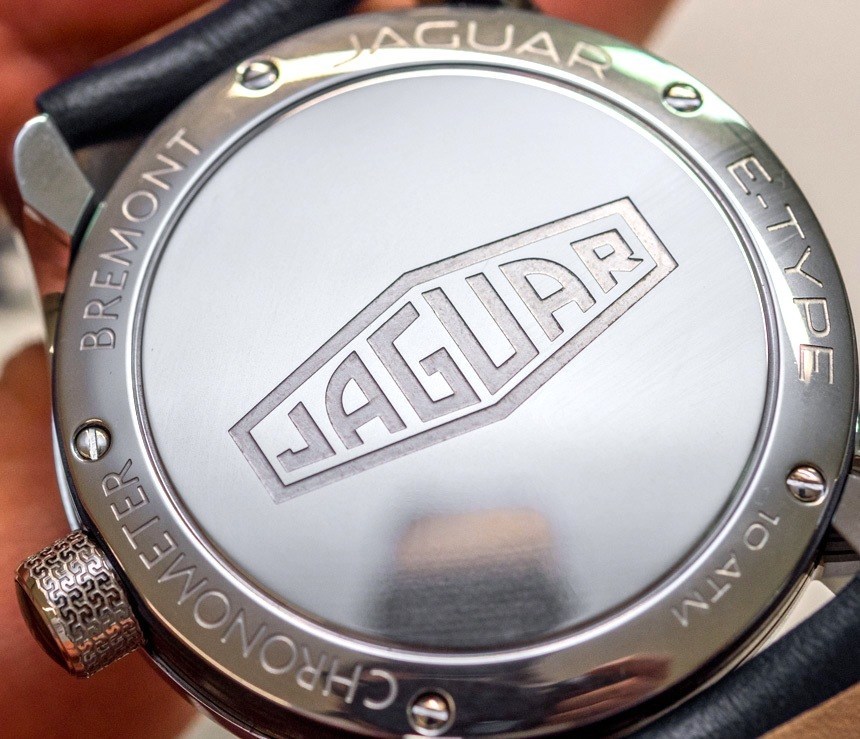 Inside of the Bremont Jaguar MKIII watch is a base Swiss ETA movement regulated and modified by Bremont as the caliber BE-36AE which operates at 4Hz with a 38-hour power reserve – it is a movement you’ll find in some other Bremont watches. The movement has been tested at COSC and given a Chronometer certification. As a more basic model, the Bremont Jaguar MKIII watch has a solid caseback with a vintage-style Jaguar car logo and an “E-Type” label to remind wearers in the future what specific car inspired the design of the watch. This is important, in my opinion, as I think watchmakers should build in more elements into their “themed watches” that allow future generations to know what those items were all about. 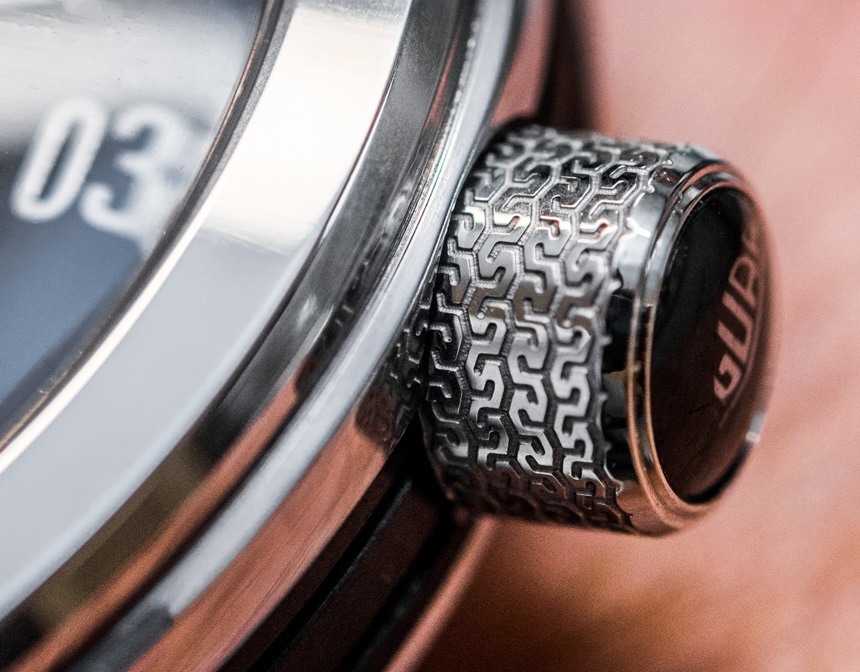 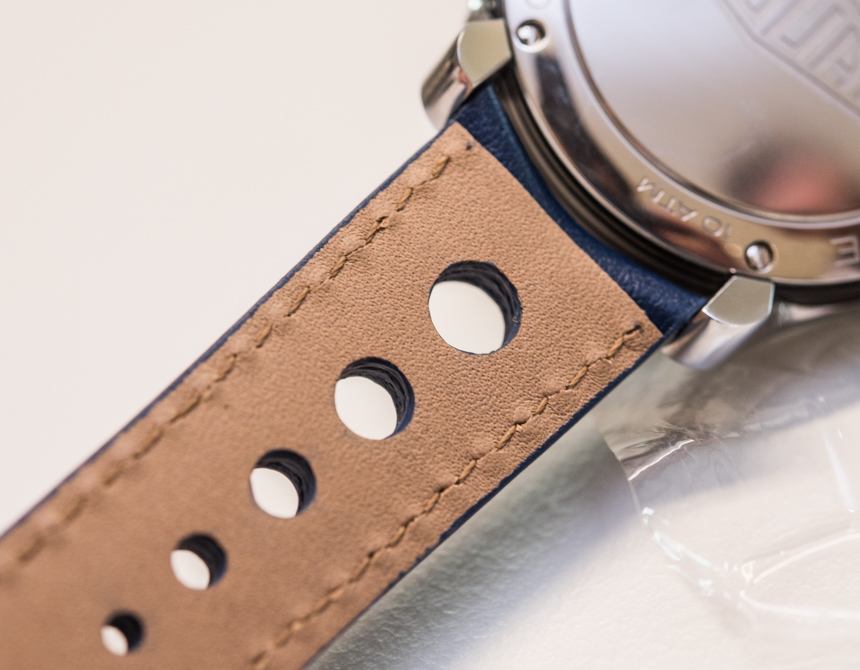 Little details throughout the Bremont Jaguar watches are exactly the types of things we really appreciate – such as the tire tread-style texture on the crown, as well as the nicely made, deep blue calf leather strap with “racing portholes.” Our David, who is wearing the Bremont Jaguar MKIII in these photos, liked the simple elegance of the dial, which allows the watch to be a comfortable daily wear that, nevertheless, reminds the wearer with the “redline” splash of color on the dial that it is automotive-inspired. 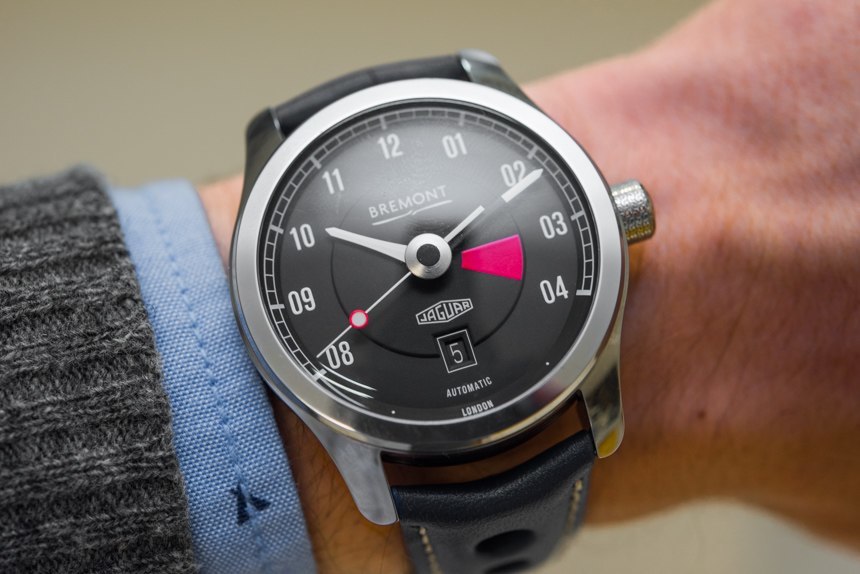 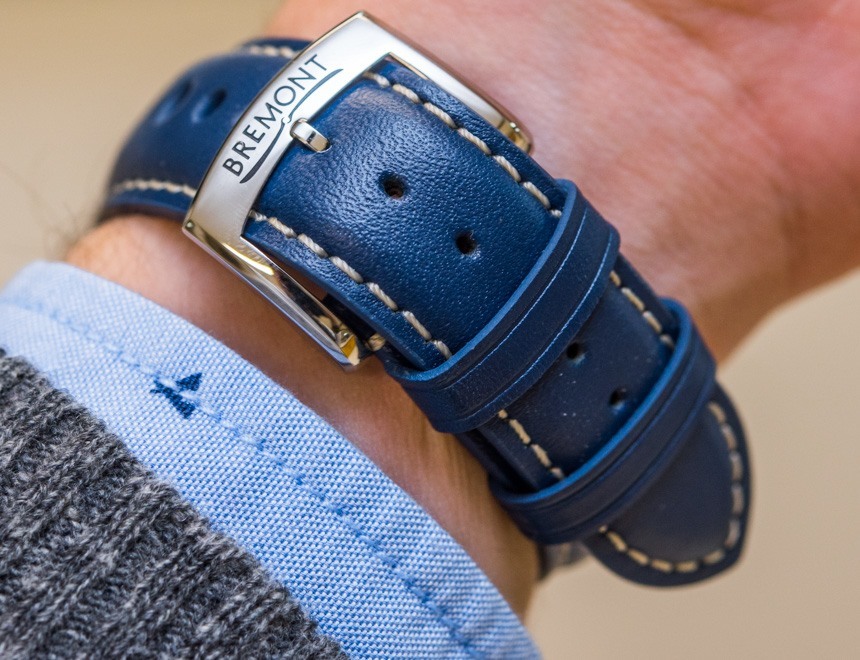 While these are clearly dual-branded watches with both the Bremont and Jaguar names on the dial, the inspiration is the vintage world of Jaguar cars rather than the modern world of what Jaguar produces. I think that eventually Bremont and Jaguar could come out with some very interesting models that remark on contemporary automotive design. When we visited Bremont, we thrashed around in a modern F-Type R and agreed that these are cars for watch lovers, and that working with Bremont makes good sense for the storied British (current parent company is Tata but Jaguar remains, more or less, independent in what they want to make) carmaker. For now, this is all about appreciating pretty, old cars with cramped seats, few safety considerations, and a whole lot of character. Price for the Bremont Jaguar MKIII watch is £3,495 (Update: $4,850 USD). bremont.com