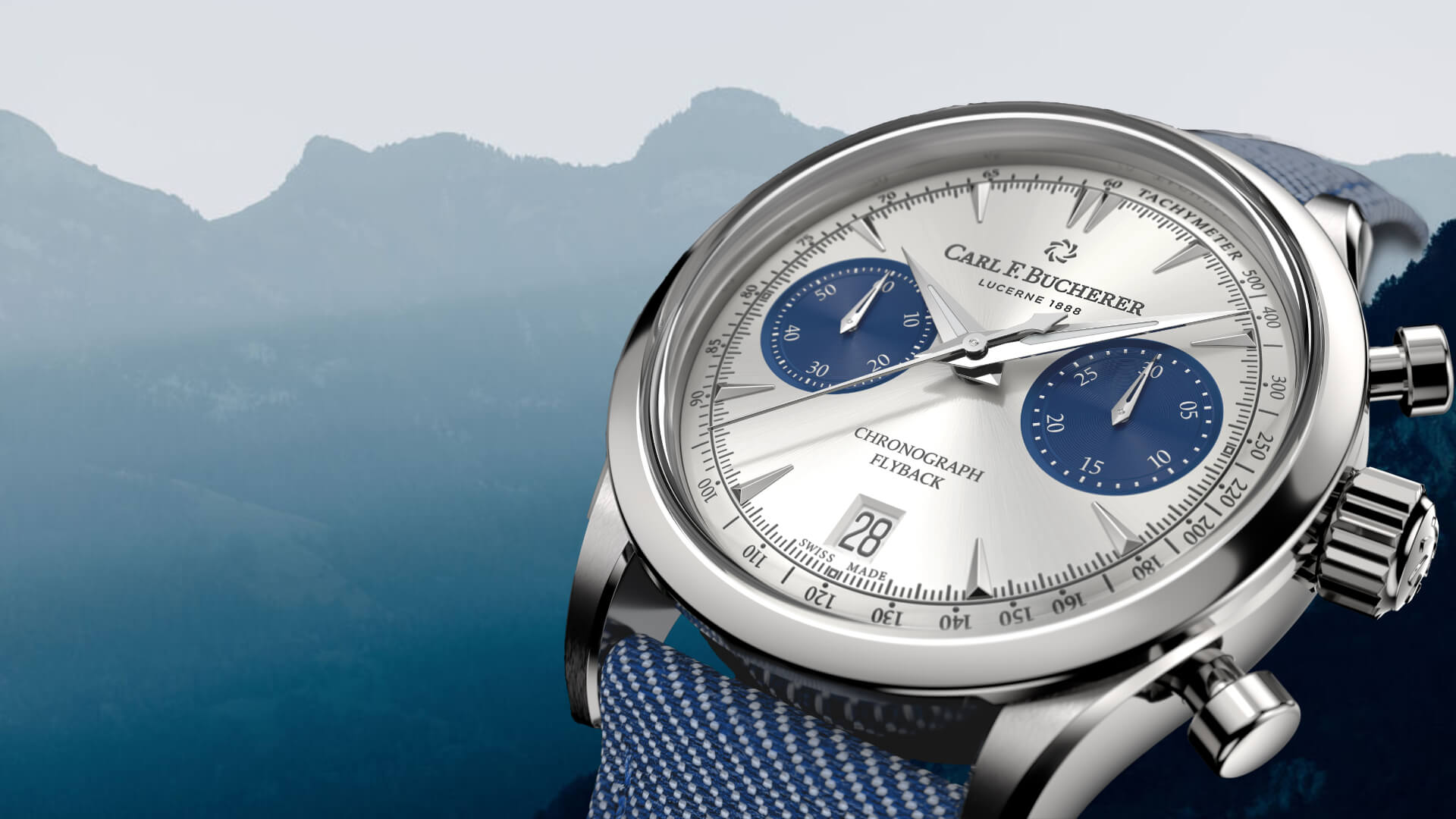 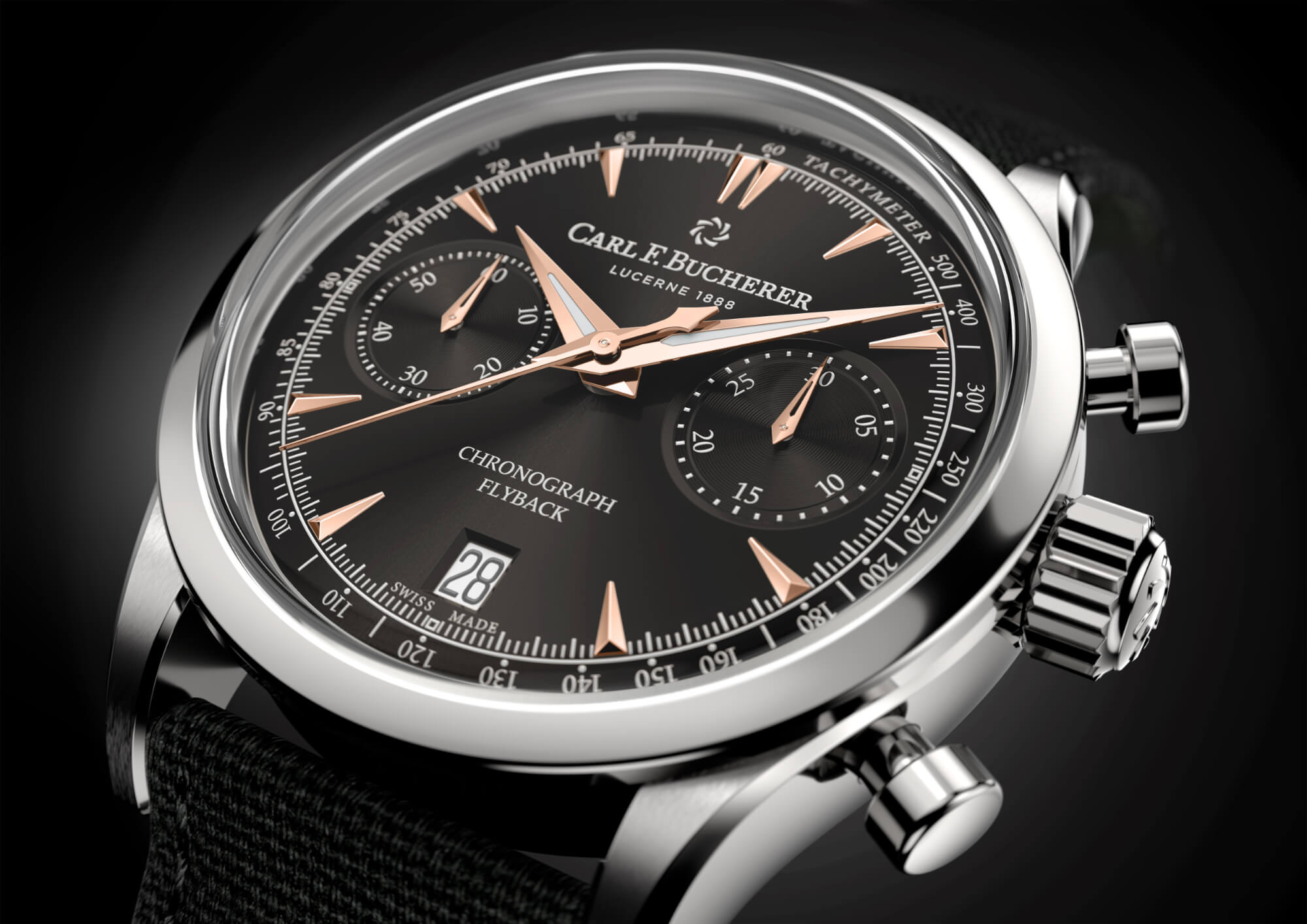 Have you ever seen a beautiful watch, a watch you’d buy immediately, only to check the spec sheet and realize it was too big or too small? After years of objectively large watches, it seems that we are now seeing brands start to produce watches in more modest dimensions. Often, though, this means releasing a single model in a single size. But is that the best approach? Just this month, Ariel was arguing for watch brands to produce models in a variety of sizes (you can read the article here), which would allow the brands to stop trying to please everyone with a single size, and start trying to please most people with an array of sizes — more options, more buyers. Well, it seems he was on to something, because for Geneva Watch Days, Carl. F. Bucherer has released its Manero Flyback chronograph in a slimmed-down 40mm case. Even better, it’s available in five different dials. 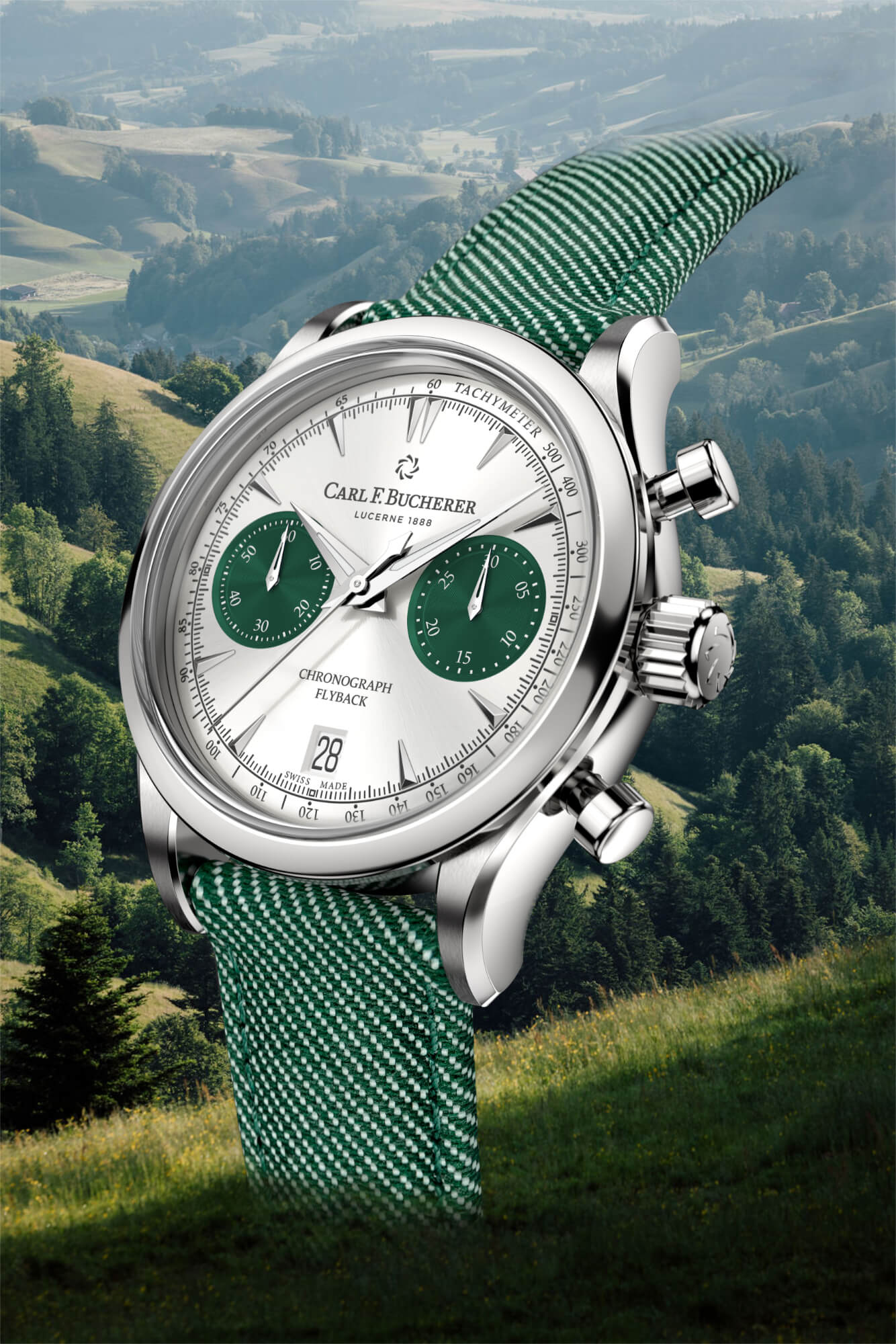 Carl F. Bucherer knows when it has a good thing, and I have to assume that’s why the brand left the case untouched aside from its new 40mm dimensions. In fact, even the thickness remains the same at 14.45mm. Mostly polished with long, curved lugs that are brushed on top, the case features a polished chamfer that runs its length. No-fuss pump pushers and a pull-out fluted crown complete the look. The case achieves a very unsporting 30m water resistance and has a sapphire caseback for ogling the movement. All the models come on color-matched quick-release textile straps made from recycled vegan materials, with pin-buckle folding clasps. No word yet on whether a bracelet is forthcoming. 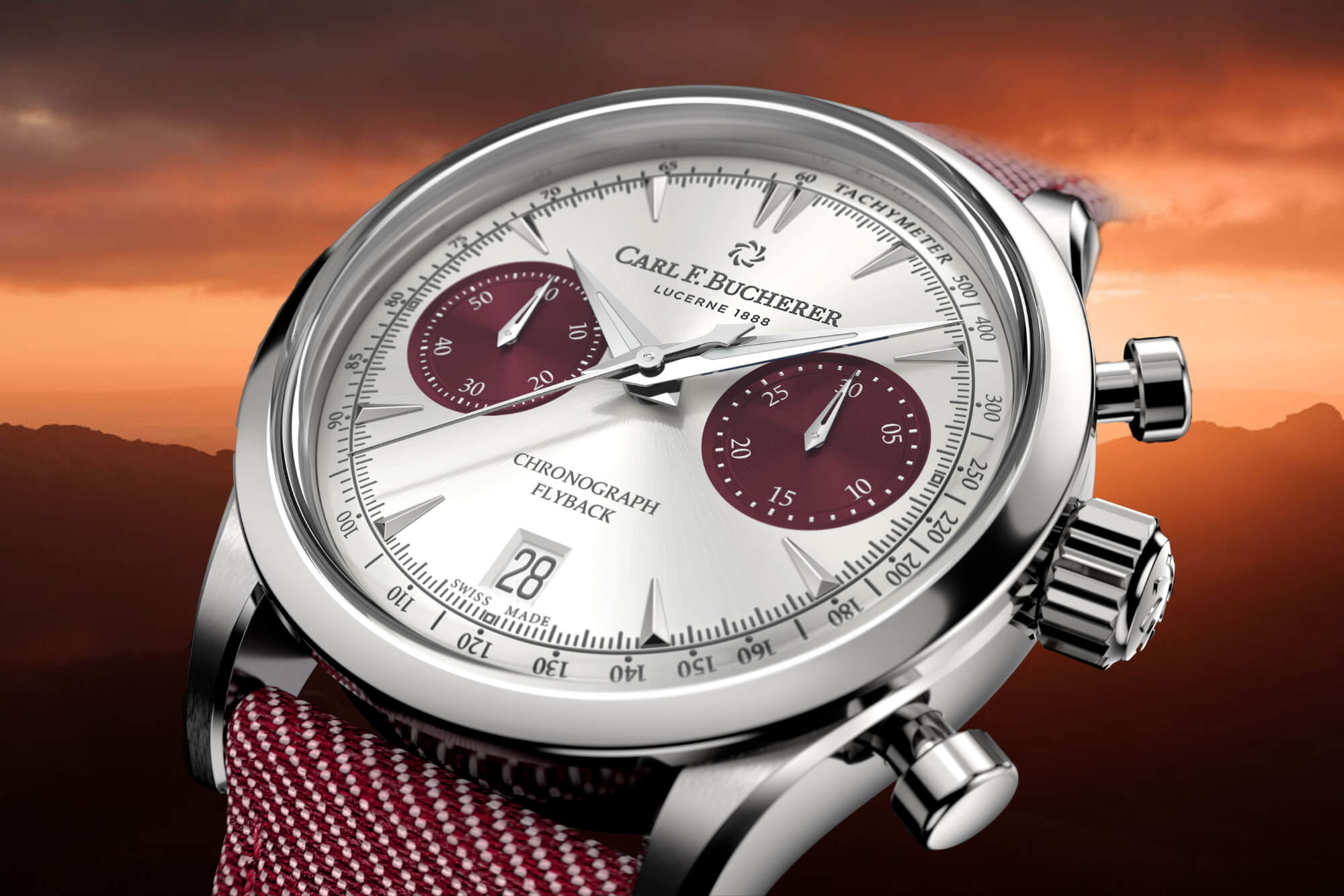 There are five dials available in this first round of 40mm Manero releases. You’ve got black and white options, each of which features rose gold-plated markers and hands, and then an array of colorful panda dials, including blue, red, and green. While the case was simply sized down, the dial has had more changes made. In an effort to simplify things for a more modern look, Bucherer has removed a number of lines from the dial: a frame around the beveled date window; a circle tracing the interior points of the applied, rhodium-plated wedge indices; and an interior ring with demarcations on the sunken, circular grooved sub-dials (running seconds and chronograph minutes). The resulting look is certainly cleaner than the original, but I wouldn’t go as far to say it’s modern—whatever Bucherer’s marketing department wants me to think, this watch is still quite traditional in its aesthetics. What remains unchanged is the dauphine handset with the hour and minute hands each featuring a sliver of lume, the tachymeter scale, and of course, the namesake flyback chronograph hand, which can be reset without stopping the chronograph first. 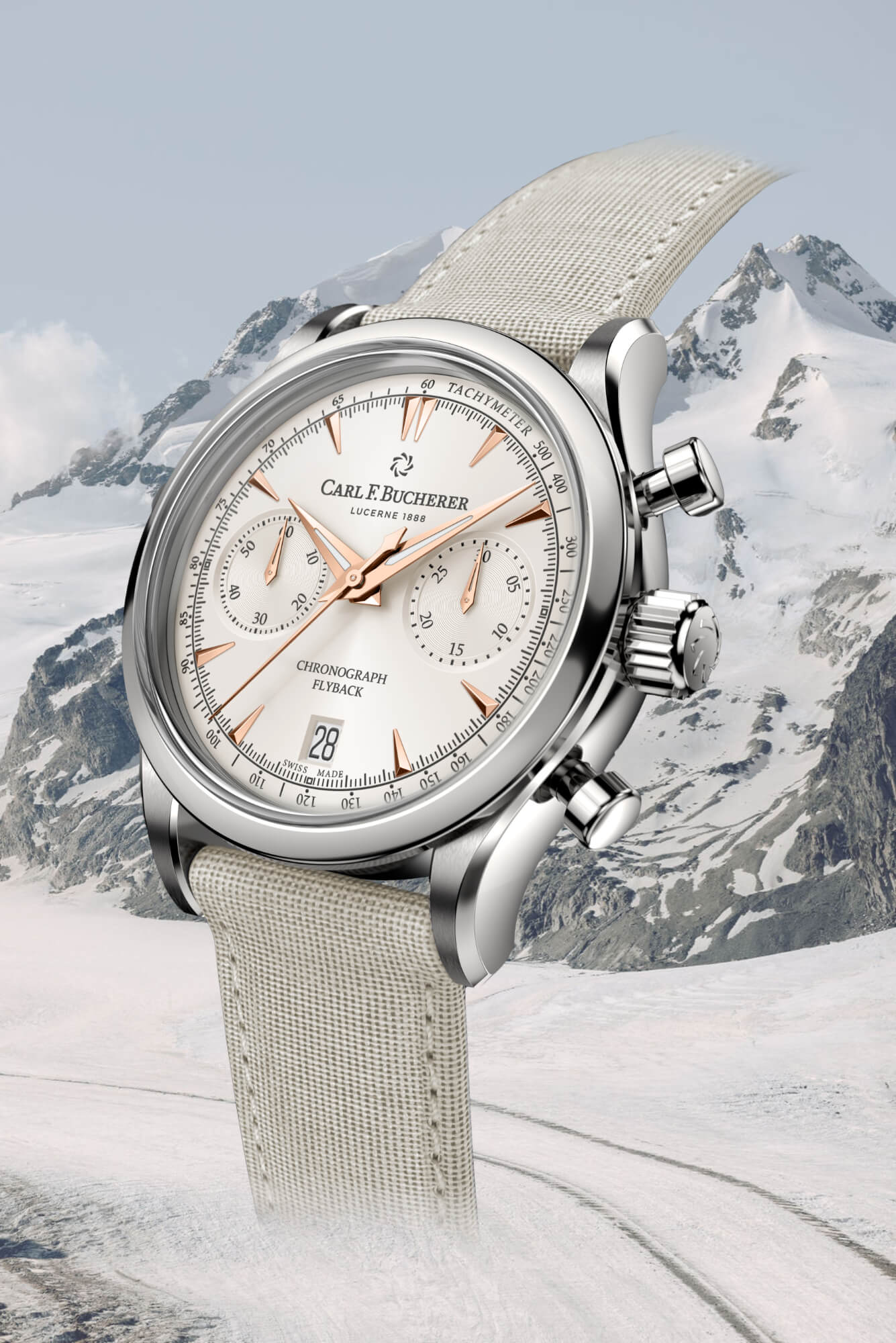 The CFB 1970 caliber that powers the original 43mm model was developed with La Joux-Perret and based on the ETA 7750, with the modifications of a column wheel and flyback mechanisms. The new Manero Flyback 40mm sports the CFB 1973, an entirely new module for the brand using a Sellita base movement. As there isn’t a Sellita movement with a flyback, it’s assumed that Bucherer has also modified this base caliber to suit its needs. The advantages are clear, though: the new movement has a longer 56-hour power reserve (at 28,800 vph) and 29 jewels instead of 25. Given the base movement used here, there’s no reason to think this movement won’t be reliable, and the column wheel and flyback modifications only sweeten the deal.

There are plenty of watches (including some from this year’s Geneva Watch Days) that might puzzle consumers as to why the watches need to exist. It often seems that serious watchmaking is a game of one-upmanship, with brands vying for the thinnest watch or the most tourbillon-ed watch, or some other meaningless horological superlative. That’s not always a bad thing, but it serves the brands’ marketing efforts, not the market itself. The Manero Flyback 40mm, on the other hand, objectively makes sense: You don’t need to look for a rationale beyond a market demanding smaller watches and more sizing options. With wearable dimensions and a pared-back dial, the new models are likely to be a hit. Here’s hoping Bucherer continues to broaden the 40mm offerings with some exciting colorways and a bracelet option. The new Carl F. Bucherer Manero Flyback 40mm is priced at $7,100. For more information, please visit the brand’s website.