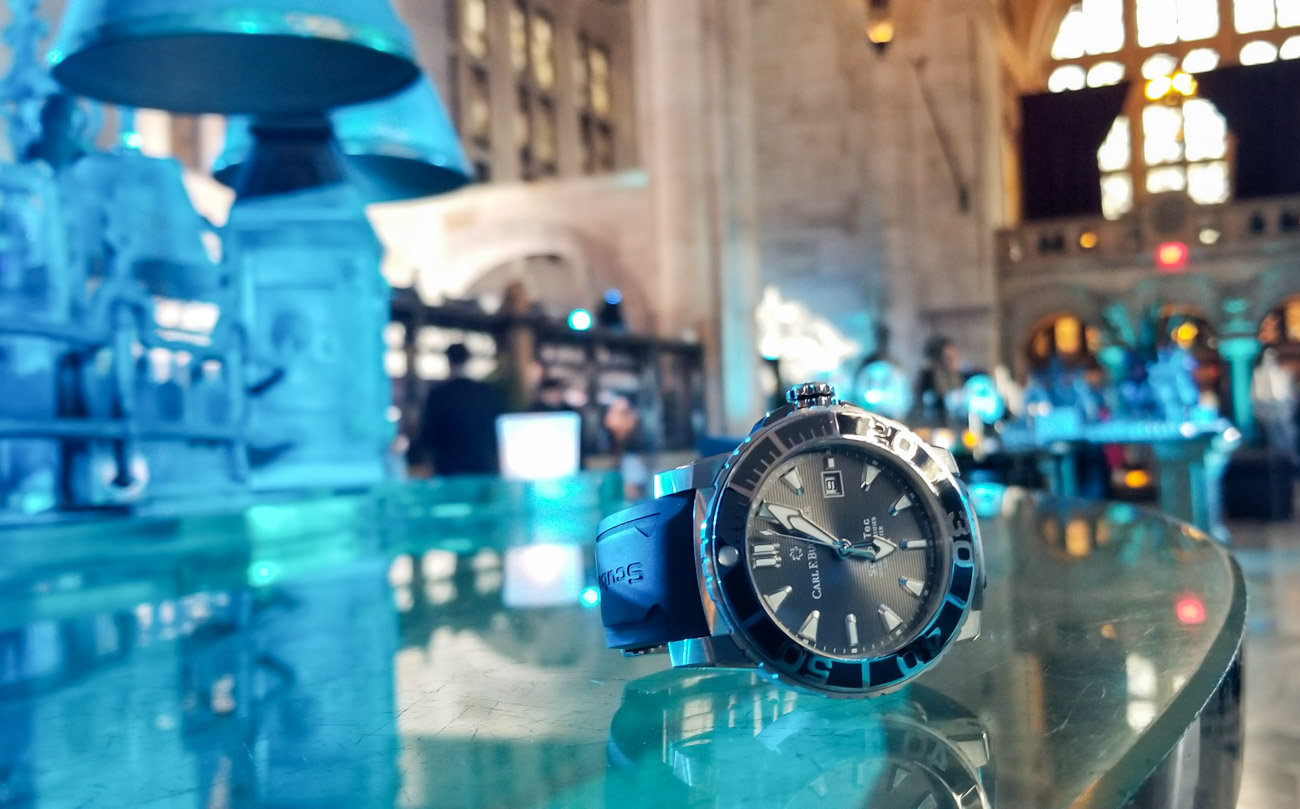 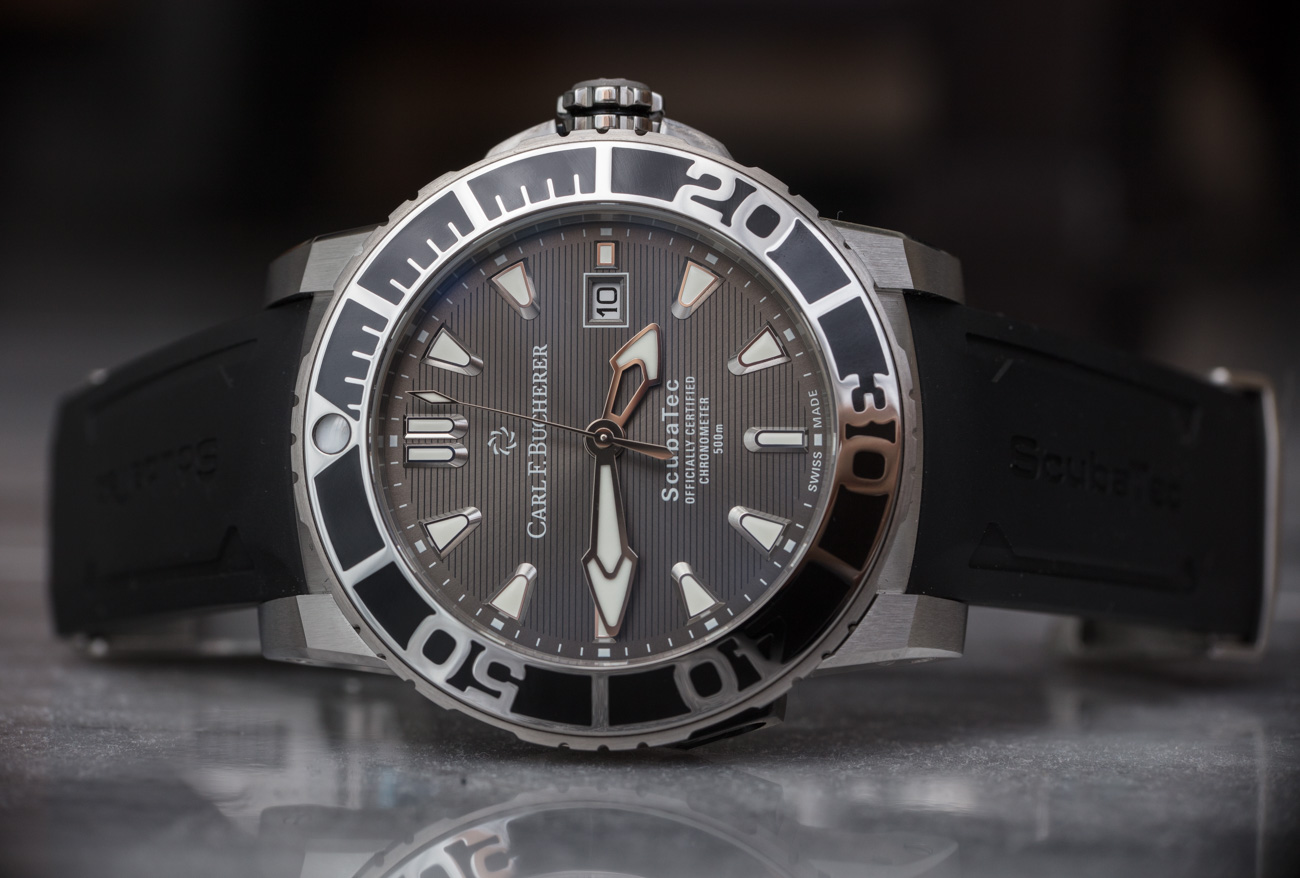 Recently in Brooklyn, New York, I joined historic Swiss watch brand Carl. F Bucherer at the global premiere of the third installment in the popular John Wick movie series. In John Wick Chapter 3: Parabellum, Carl F. Bucherer watches are once again prominently displayed throughout the movie in a particularly natural way that actually seems to enhance the movie’s character and sense of depth. Through close relationships and attending parts of the movie’s filming, Carl F. Bucherer’s CEO Sascha Moeri has helped redefine what it means for a wristwatch to help sponsor a major movie production. 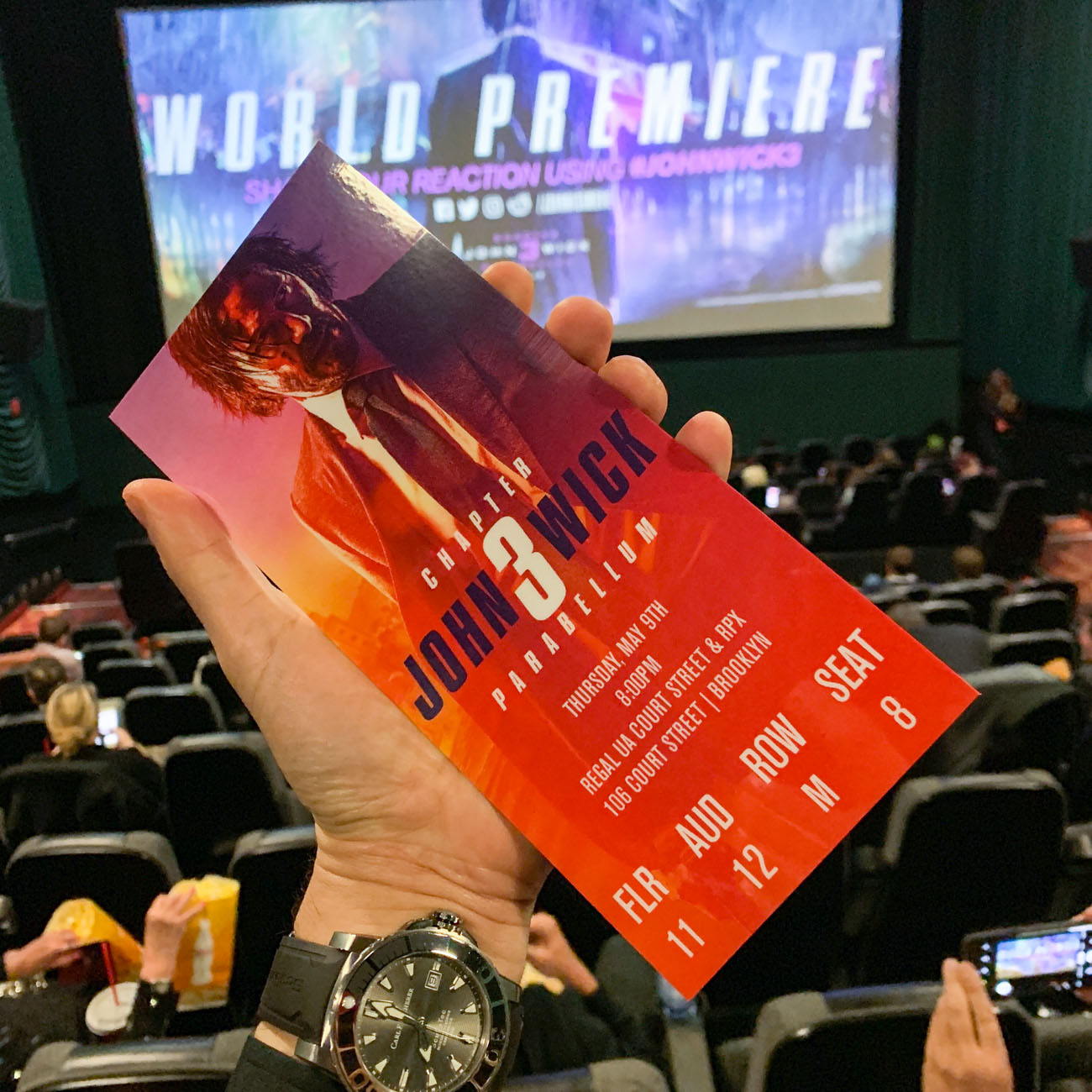 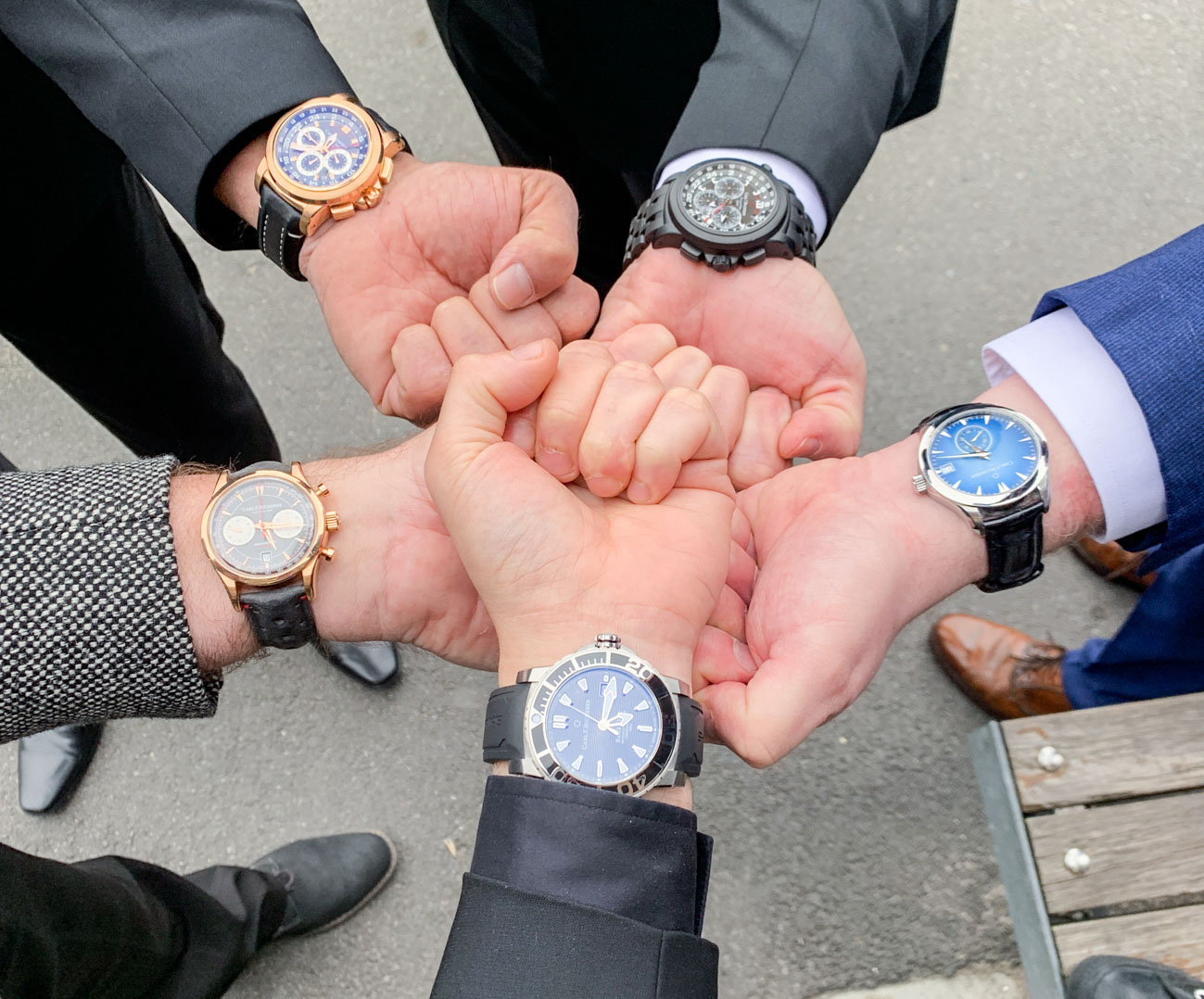 On my wrist at the John Wick 3 movie premiere was a new 50-piece limited-edition version of the Carl. F Bucherer Patravi ScubaTec, produced exclusively for the John Wick 3 cast and crew (not available for standard commercial release). Star Keanu Reeves and director Chad Stahelski got their own personalized versions of the watch, as will many important people who participated in the movie. This particular ScubaTec (with its “John Wick III” engraving on the caseback) isn’t actually in the movie but many other Carl F. Bucherer watches are. Notably, the simple, silver-face dressy Carl F. Bucherer watch is worn “tactical-style” on the inside of his wrist by John Wick actor Keanu Reeves.

Watches play a number of roles in the John Wick 3 movie, ranging from Mr. Wick himself constantly checking the time to gold Rolex timepieces worn by the faux-homeless assassins as subtle yet ironic cues that they are not to be mistaken for mere “street people.” A movie series so linked to the notion of macho ambitions and slick style would be incomplete without guys kicking ass while wearing cool watches. 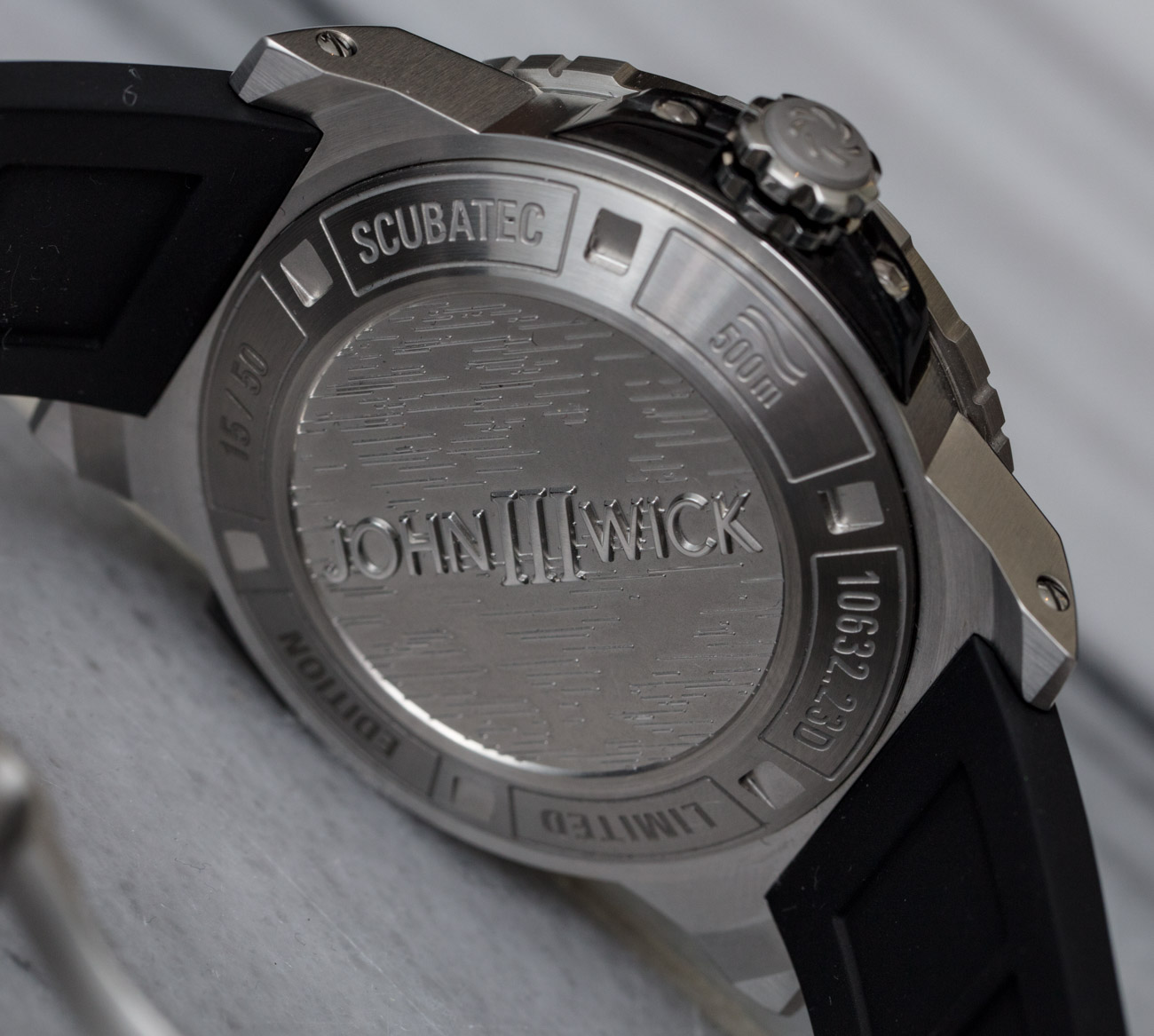 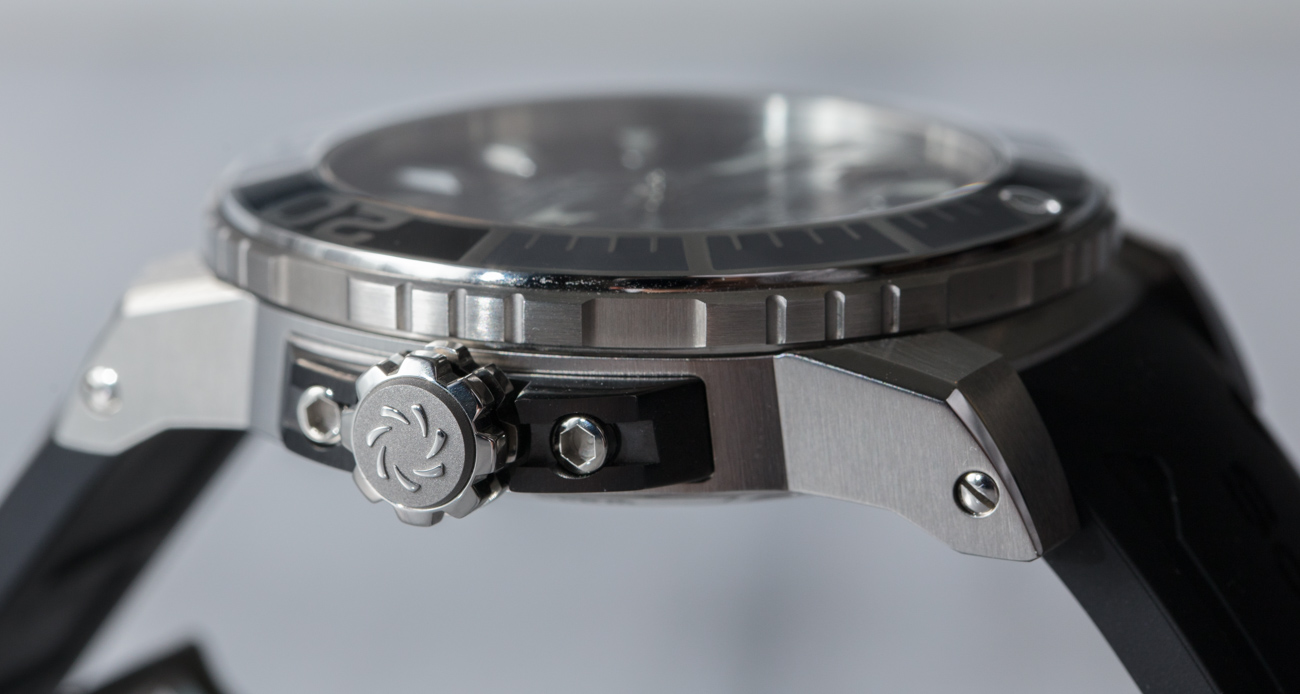 That sounds silly until we consider how many timepieces have acquired cult desirability status because of being worn on a popular character — especially once the movie itself has had time to age and mature into the popular zeitgeist. I’ve heard people say, “I want the watch worn by John Wick,” without even knowing the particular model name, only that it was made by Carl F. Bucherer. Then there is the matter of watch product placement helping out the entire timepiece category segment. Consider one of the more interesting scenes in John Wick 3 to feature Carl F. Bucherer product placement not as worn watches but as atmospheric scenery. During a particularly well-done fight scene in a glass building, an animated billboard in the background features a currently running Carl. F Bucherer advertisement. Many times during the scene, viewers can easily see the back of a watch movement with an exposed movement and automatic rotor. Even the watchmakers get some love in this Hollywood romance between a man and his guns. 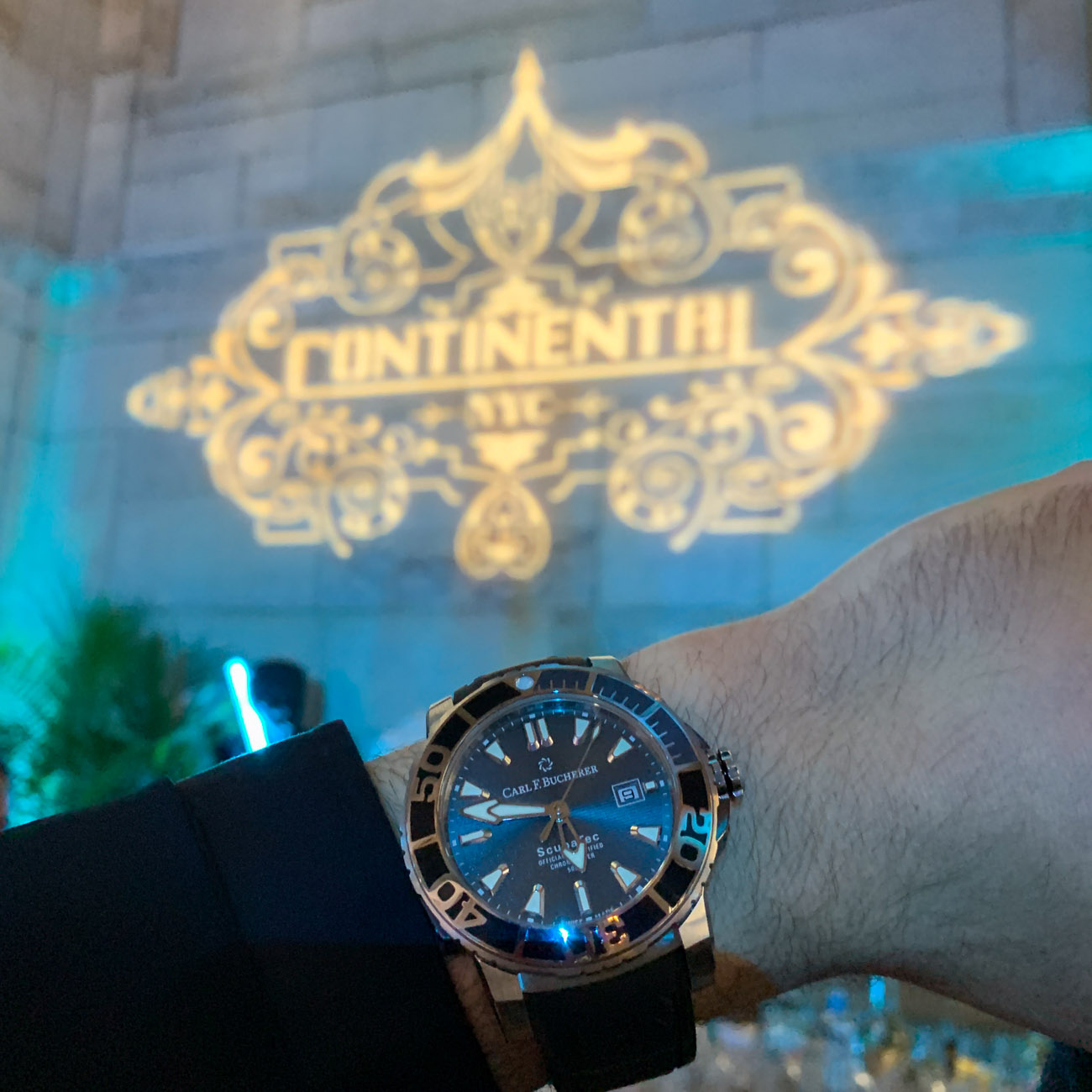 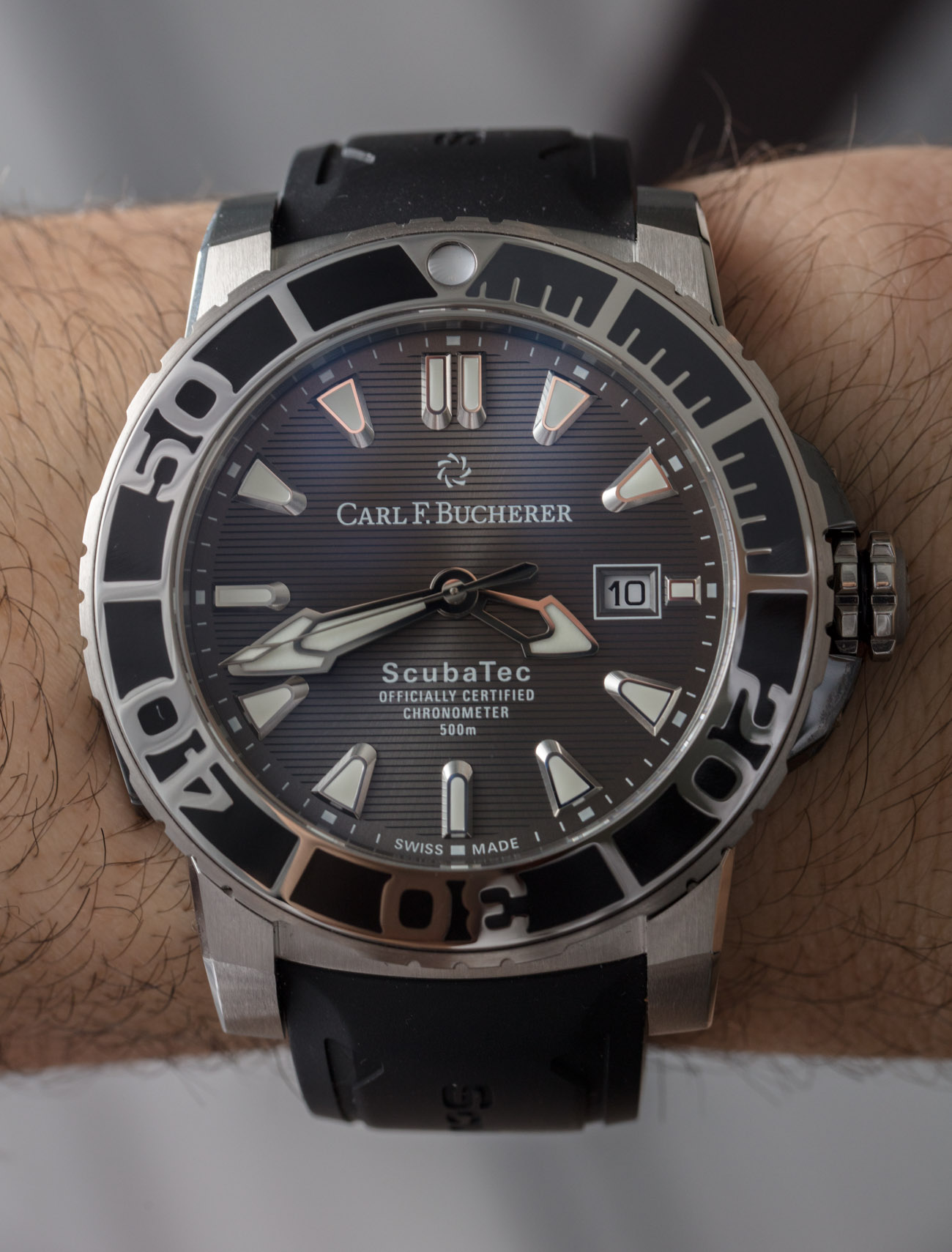 Carl F. Bucherer is a relative newcomer when it comes to participating in major movie productions. Swatch Groups brands such as Hamilton and Omega certainly have a lead here and have been rather successful in their own respects, gaining consumer attention by smartly placing watches in the right films, in the right ways. Other brands have been less successful in placing watches in films, often because the product placement feels too much like an advertisement. That’s really not the best way to go about getting a timepiece in a film.

The best use of a watch in a film is when the design of the timepiece actually enhances the character or set design and when time or wristwatches are part of the plot. It makes sense, for example, to feature a timepiece when time is of the essence and when there are regular cuts to a character’s wristwatch for plot purposes. It makes less sense when the name of a watch brand is included in a movie’s dialogue just for product placement. Even with its relatively short time participating in movies, Carl F. Bucherer has done a better job than most getting its products naturally and satisfactorily into movies. In addition to the John Wick movie series, you can see Carl F. Bucherer in Atomic Blonde, one of the more recent The Fast and The Furious movies, and Deadpool 2. For the latter movie, Carl F. Bucherer actually developed a unique science-fiction-themed prop. 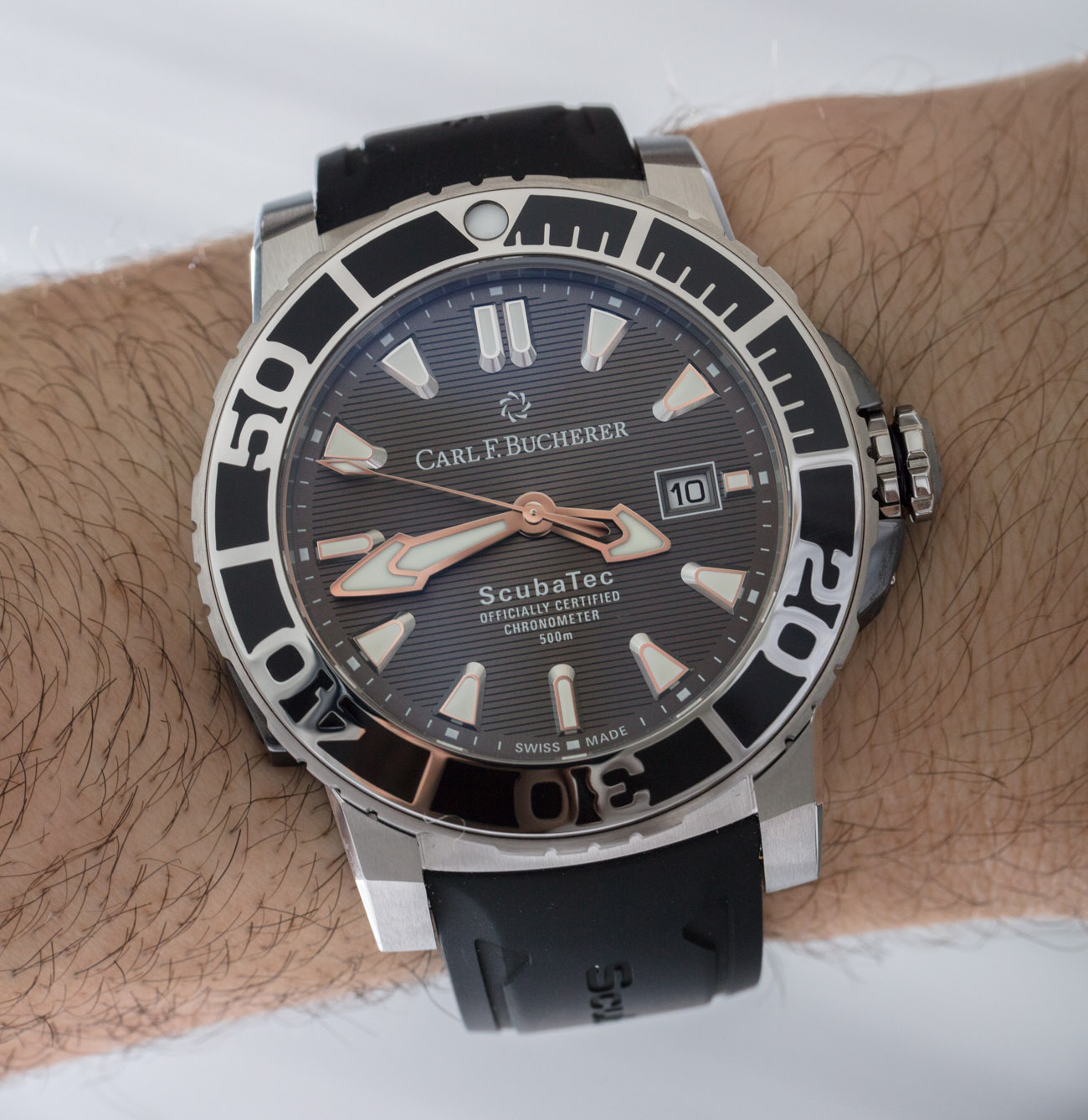 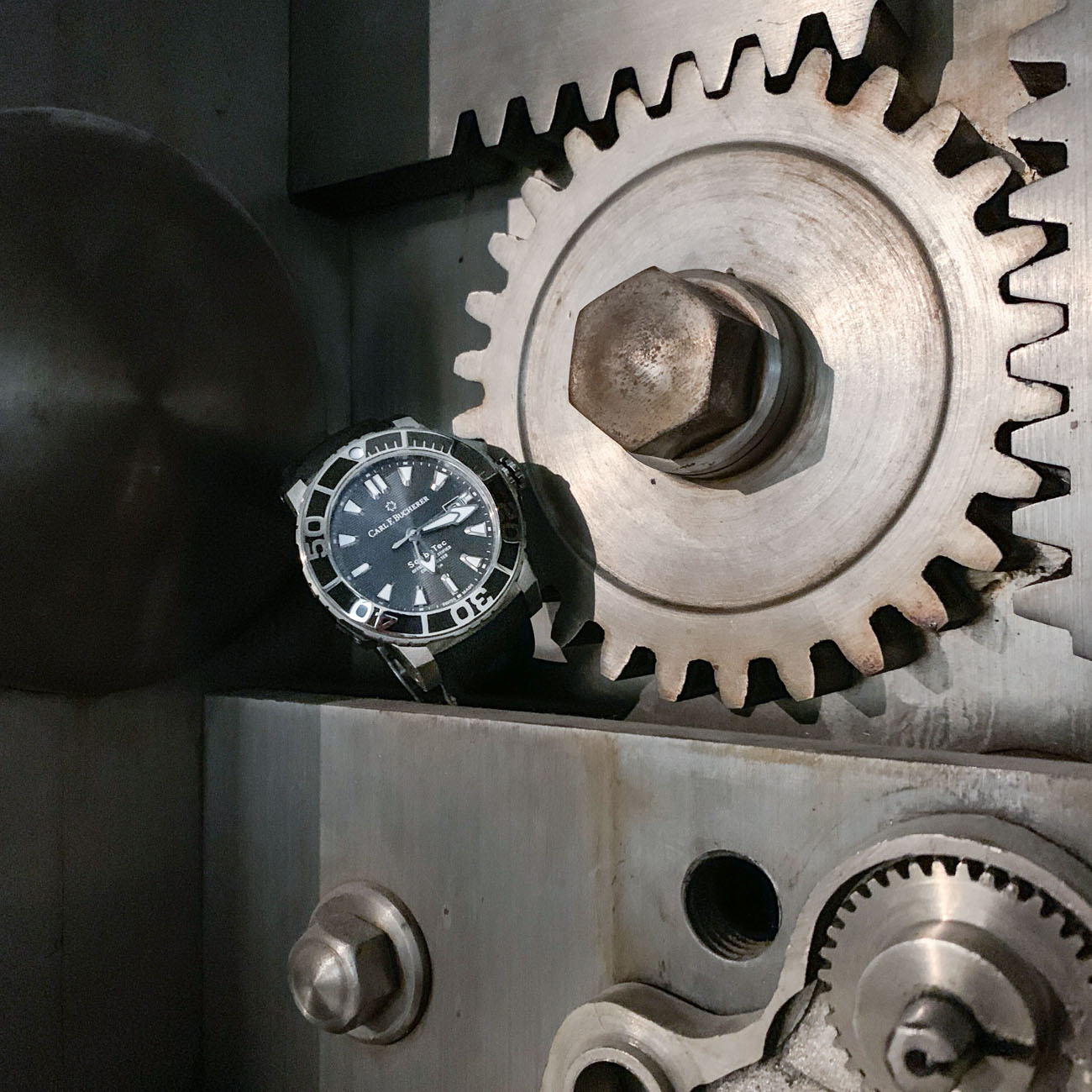 Based in Lucerne, Switzerland, Carl F. Bucherer is a historic brand going back to 1888, but extremely modern in how they approach the watch market. The brand is also bolstered by its integrated relationship with the larger Bucherer watch retailer chain that recently purchased Tourneau — another watch retailer chain — in the United States. At Bucherer and Tourneau stores (soon to be relabeled as Bucherer stores), they consider Carl F. Bucherer their in-house brand.

Carl F. Bucherer CEO Sascha Moeri has one other benefit to his name that I feel deserves mentioning. He was one of the young watch managers who trained under the late Nicolas Hayek, Sr. Senior. Hayek was an incredible watch brand manager, equally savvy in business and consumer psychology. Hayek championed individualism in decision-making, confidence, and thinking outside the box — all lessons extremely important to selling a luxury watch product today. Other managers, such as Jean-Claude Biver, also “studied” under Hayek, Sr.’s professional guidance. With no more Hayek or people like him, those such as Mr. Moeri, who gained knowledge and experience under Hayek, are a rare and very valuable breed of watch industry managers. 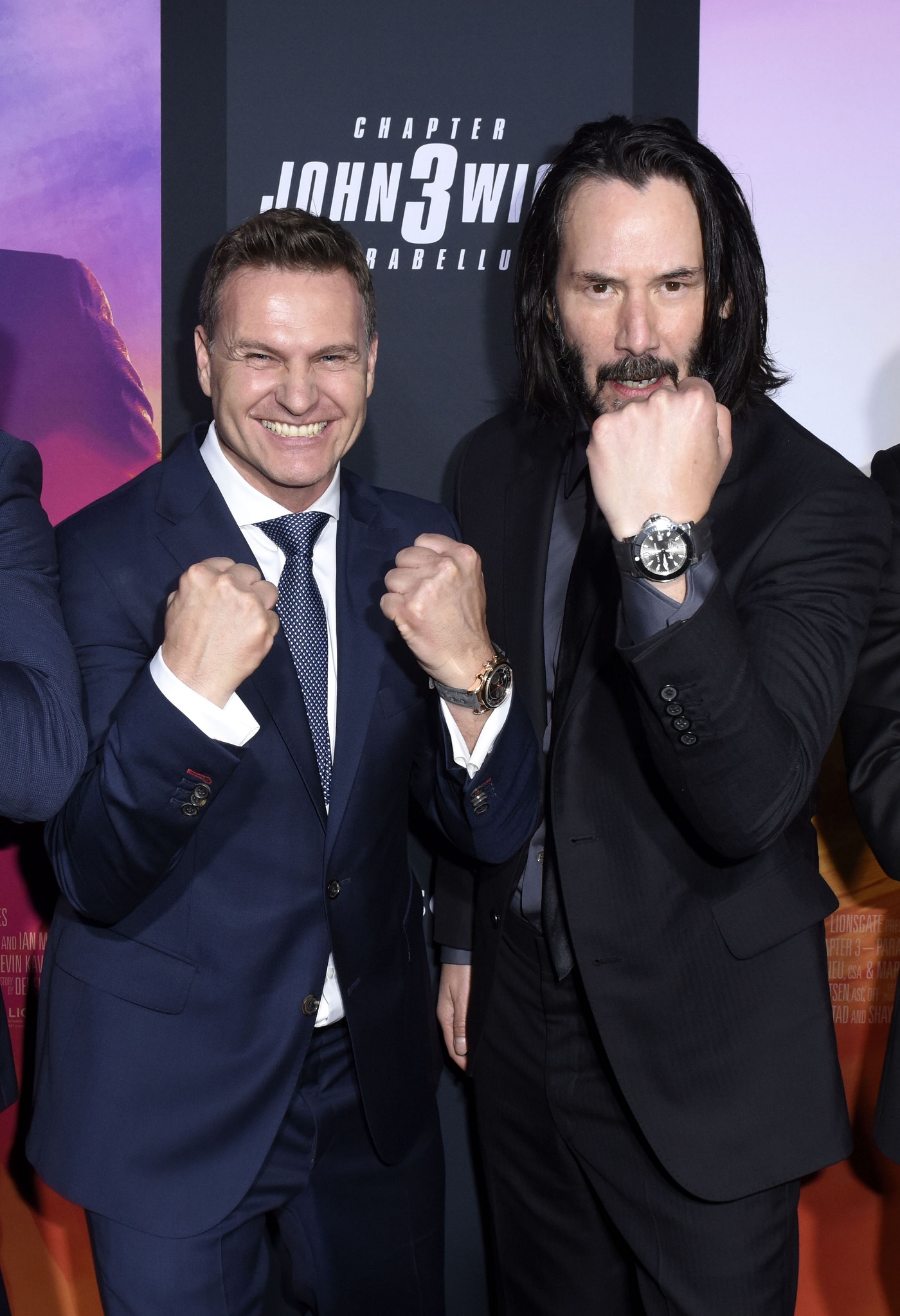 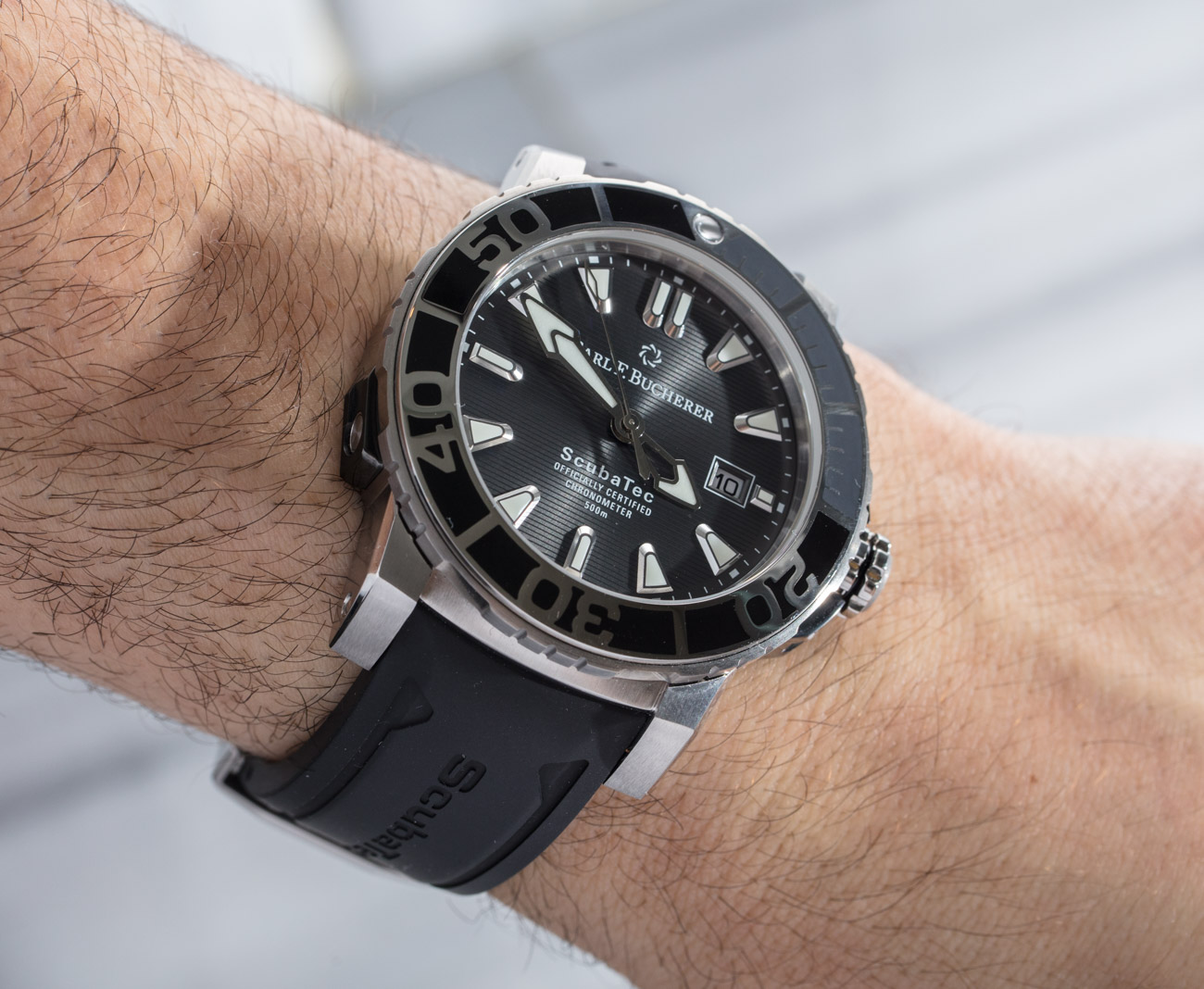 Anyone seeing John Wick Chapter 3: Parabellum will be impressed by how watches (as well as Carl F. Bucherer) are integrated into the plot as well as the visual experience of seeing the movie. It’s a fun-filled ultra-violent action romp that satisfies so much because it allows viewers to vicariously release stress (something many us of in today’s society have too much of) through our main man on screen during his almost non-stop killing spree. Don’t take it too seriously, and look for all the compelling characters, star cast, and tremendous fight choreography production values. Congrats to all the John Wick 3 cast and crew lucky enough to get this limited-edition version of the Carl F. Bucherer Patravi ScubaTec watch that would otherwise have a retail value of $6,200 USD. Learn more at the Carl F. Bucherer website here.