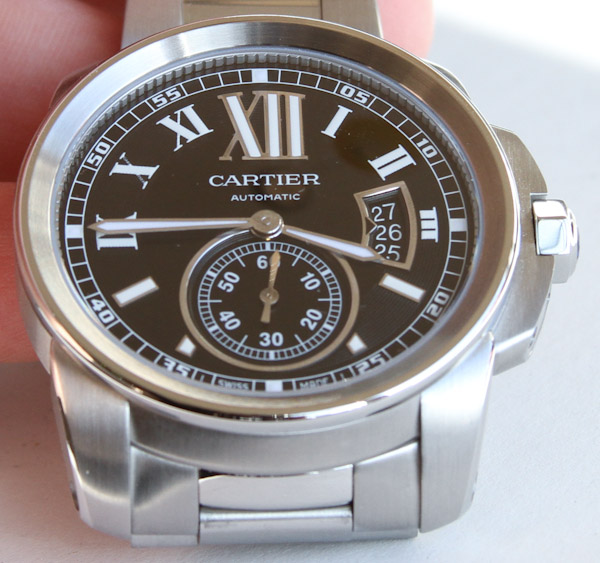 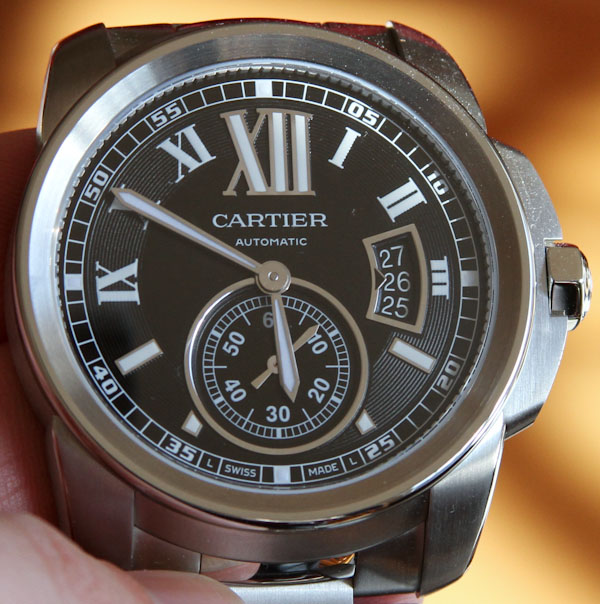 There is a word that is thrown around a lot in the watch world that means the public takes a watch (or anything else for that matter) seriously. That word is legitimacy and I love to hear the French pronounce it. Cartier is what they call a legitimate brand. They have heaps of reputation, a solid history and plenty of important people who wear their products. Classic Cartier designs are also a great influence to their direct competitors. They really are the model of a solid luxury watch brand.

A few years ago, Cartier decided that this was not enough. They wanted even more legitimacy, especially with the growing population of seasoned watch lovers. This meant adding a lot more high-end watches to their range, as well as offering in-house made movements. Well, sometimes “in-house” just meant no one else was using those movements but that’s another matter altogether. I also suspect this push to make movements was partly due to ETA’s (Swatch Group owned while Cartier is Richemont) continual threats to stop supplying movements to outside brands. ETA hasn’t done this yet but Cartier was smart to invest in movement manufacturing in the event that it does happen. 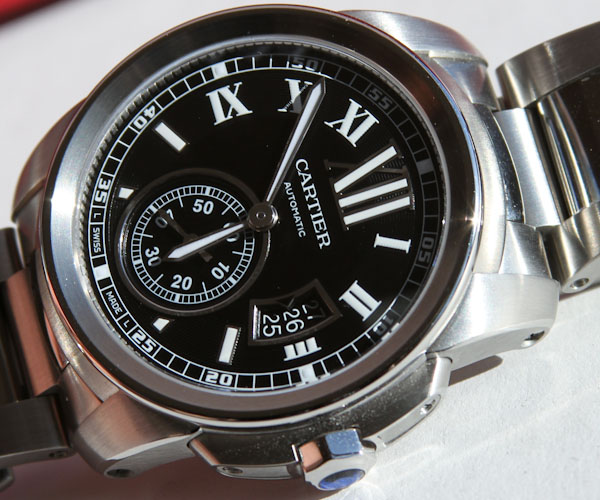 The first watches to contain in-house Cartier movements were very high-end. Cartier offered a brand new look and feel to the type of watch that could bear the Cartier name. All these watches had exotic movements and prices were on par with that of some very nice real estate. In 2010 Cartier announced the release of the simply named Calibre, a story that I covered here. The new masculine watch offered a sporty look (more so than Cartier’s other sport watches such as the Pasha, Santos, and Roadster) as well as, for the first time, an “entry-level” Cartier with an in-house movement.

That movement was the 1904 MC. A thin caliber automatic that had 48 hours of power reserve with a rotor set of ceramic ball bearings. It was rather nicely decorated, too. Functionally, it has the time with a subsidiary seconds dial and the date. Cartier made sure that it had enough differences in comparison to most of the base movements offered by ETA. You can see the movement via the sapphire caseback window on the back of the watch.

I predicted in 2010 that the Calibre would soon have a bracelet option and in 2011 Cartier offered one. For me, the watch was now complete. Cartier is known for rather nice bracelets so it was a shame to see a new sport watch on just a strap. That is the one I wanted to review and so I did. 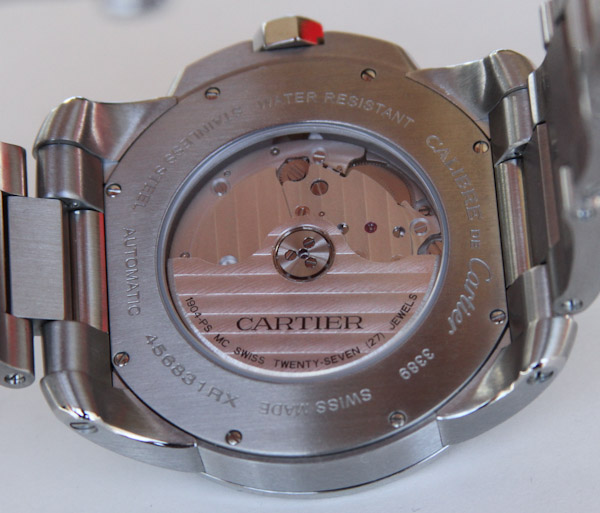 The Calibre is deceptively large. Seeing it in a store window I would bet money it was larger than its 42mm wide size might suggest. Thanks to a hefty crown guard and large, widely spaced lugs this watch is one of the best optical illusions around. Thanks to the lugs allowing the bottom to wrap around your wrist, this watch is quite comfortable to wear and in addition to that, the piece does not have a tall profile.

For the price, the detailing and finishing on the case and bracelet are very good. Thin strips of polished metal are placed around the brushed surfaces with the contrast between the two finishes being very good. Let me explain, on most cheaper watches when you have a brushed area and a polished area, the transition between these finishes is more of a blur/blend. It comes across as lacking refinement. On a watch like this (and many other higher-end pieces) there is a very distinct transition between the finishes. I hope that made sense. 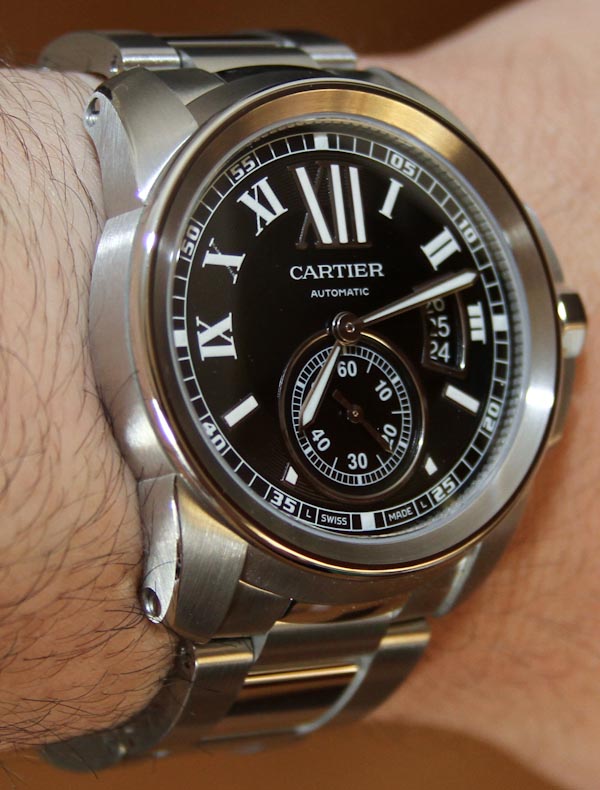 Detailing on the case is impressive with a great deal to look at – including recessed areas and, my favorite part, the bezel and flange ring. Look at the inner sides of the dial and it looks like you are viewing gear teeth. This design feature adds visual interest and complexity to a rather simple dial. Cartier really wanted to make sure the case and dial has the right mix of complexity and simplicity.

The dial is pretty cool and I like seeing it and reading it. However, I feel that Cartier could have extended the minute hand a bit more and given it a bit more lume. In fact, I wonder what it would look like with larger hands overall. The sub second dial is tastefully done and the classic Cartier DNA is preserved with the Roman numerals. The biggest point of contention for most people is the “expanded’ date window – Cartier is just being trendy with that. Personally, I don’t like it and feel that it off-balances the dial. The large date window and crowd guard are meant to be harmonious shapes, but instead they help the watch look a bit “right heavy.” Little quips, but Cartier sets a tall bar so I figured it was worth noting. Here, the dial is in black but they are also offered in white and brown. 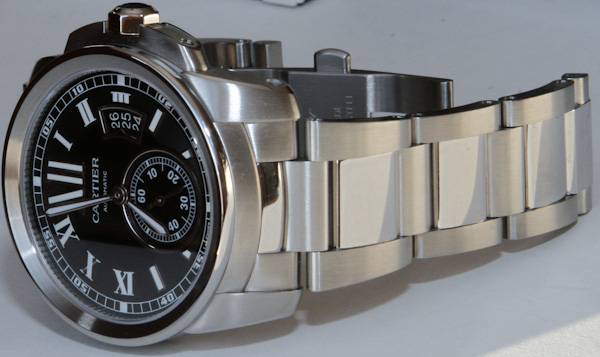 The bracelet is very nice and looks like that of an evolved Roadster bracelet. Aside from looking nice, the best part is the locking butterfly clasp. Some Cartier clasps are mere tension clasps which are prone to opening if your arm experiences shock. They can also degrade over time. The detailing on the clasp is very good and it operates smoothly.

Features like the bracelet, bezel, perfectly domed AR coated sapphire crystal and in-house movement make the Cartier Calibre family of timepieces easy to lust for. Trust me that in the coming years Cartier will offer chronographs and other complications based on the 1904 MC architecture. For now, this model is affordable and attractive … As well as legitimate. Priced at $7,500 for the all steel model and $10,950 for the steel with 18k rose gold model.