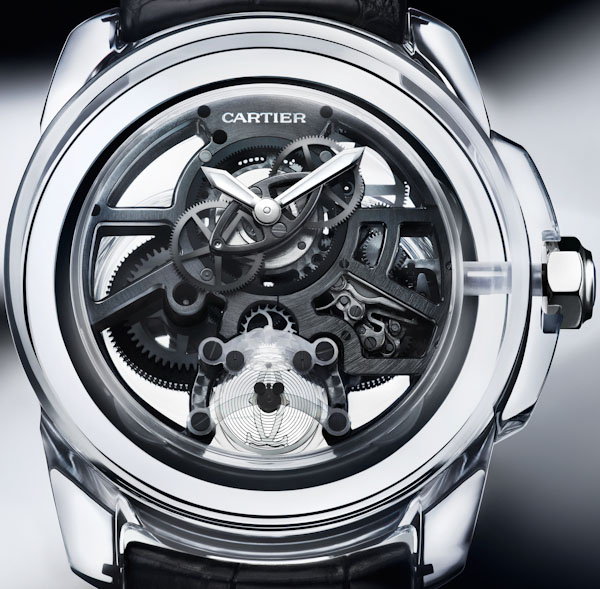 In the slow warm Swiss summer, Cartier wrapped up its announcement of their latest concept watch called the ID Two (ID2). It is a follow-up to the ID One watch from a few years ago and while something totally different, is a serious step forward in the progress the ID One attempted to make (the futurization of the mechanical watch). There are a few ways of looking at the ID Two. You could look at it as a gear-head watch lover and be in awe, you could look at it as a luxury marketer and scratch your head, or you could look at it from the perspective of a consumer and think, “now that is pretty cool, I’d buy one for the right price.” The ID Two won’t be available for any price because Cartier isn’t going sell any. In fact it might be worth much more to them as a marquee product and brand defining concept piece. However, the writing between the lines of the elaborate concept announcement and fancy watch presentation are instructions on how to turn the entire luxury watch industry on its head.

While there are a lot of novel elements in the ID Two, nothing is inherently brand new. What Cartier did was impressively use some very special materials and ideas together to produce a timepiece of the likes the world has never seen before. The whole mission of the ID Two is to increase the accuracy, reliability, and efficiency of a mechanical watch movement. Insofar that you understand the technical achievements, it does that – with a lot of dazzle to boot. What it also does is further remind us how much in the past your basic mechanical watch is. The ID Two aggressively asserts the notion that “if you want a watch of the future, you need to ditch metal.” And that is exactly what the Cartier ID Two and its thematic brethren are doing. 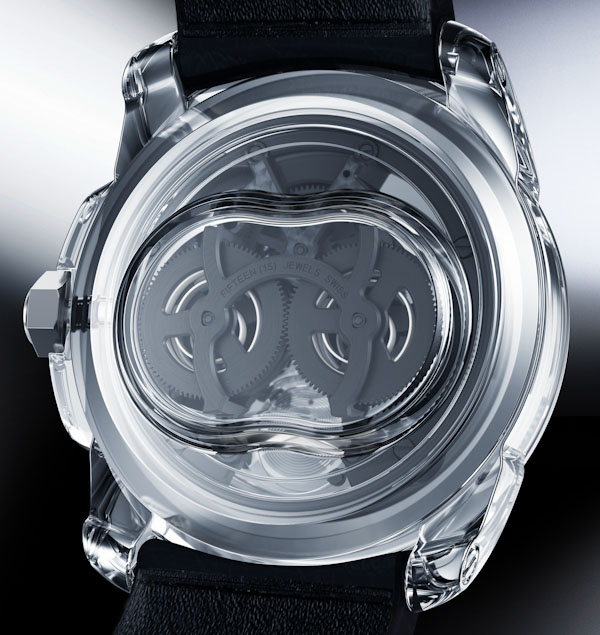 There is metal in the ID Two, but less of it than you might expect. Let’s start with the most notable non-metallic component, the case. The ID Two uses the 42mm wide Calibre style case, but one that is made from Ceramyst. That is a sexy sounding name for transparent polycrystalline ceramic. In other words, a very hard, mostly clear ceramic case. I don’t know much about this material, but according to Cartier they are the first to have used it for a watch case. Are crystals next?

The case has no screws holding it together. In fact, it doesn’t really have air in it either. This is the first watch I have heard of that has a vacuum sealed inner chamber. The caseback of the watch is vacuum sucked to the rest of the case – so don’t try and pry it off. The 99.5% air-free space in the watch reduces friction caused by air – mostly via the escapement. According to Cartier, the removal of air from the case dramatically improves movement energy efficiency by almost completely removing energy that is lost due to air friction. Pretty cool. Though the complications mount when you think about the implications. Those being little things like how to seal the case, how to adjust the movement, and how an air-free space effects the movement. In short, Cartier had to patent a few things, remove all lubrication from the movement, and use some fancy new materials that are almost frictionless and don’t need oil. Things more advanced than standard silicon. 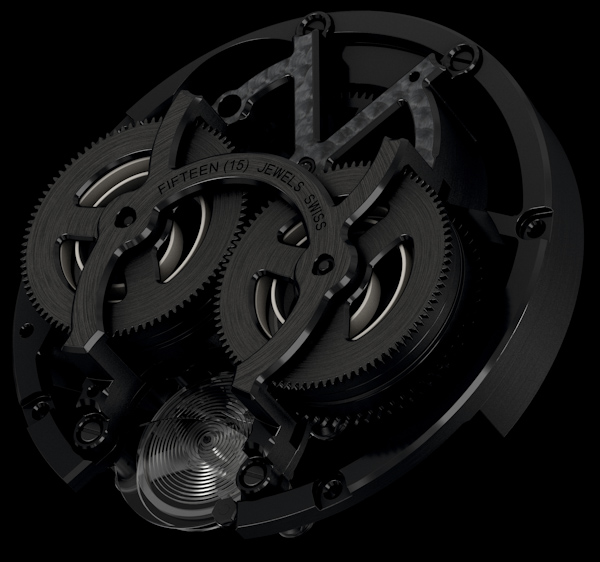 The metal in the case mostly takes the form of bridges, which are titanium. They are DLC coated which make them stronger and darker, and of course help to reduce friction even more. For the escapement parts Cartier used innovations from the ID One. There, an adjustment free escapement was developed. This means that once you put it in the case you don’t need to adjust it for accuracy. This uses Cartier’s DRIE machining technology, and a material they like to call “carbon crystal.”

Carbon crystal is a really fancy sounding term and I am impressed with Cartier’s marketing folk for choosing it. In fact, not one time does Cartier mention silicon. If my understanding is correct, carbon crystal is silicon, but Cartier uses a diamond coating over it. This is similar to Diamonsil – which is a Ulysse Nardin owned technology. Coating silicon with diamonds (using a very special process) is an amazing way to further reduce friction and make silicon much more durable. The ID Two uses carbon crystal parts throughout – including for the balance wheel and other parts. They don’t need lubrication, and live happily in an the air-free zone. More and more metal is feeling left out. While metal has its benefits, it has lately been overshadowed by high-tech materials which offer unique properties in mechanical movements. What effect will this have on the industry, and is a non-metal watch without anything inherently precious still luxury? 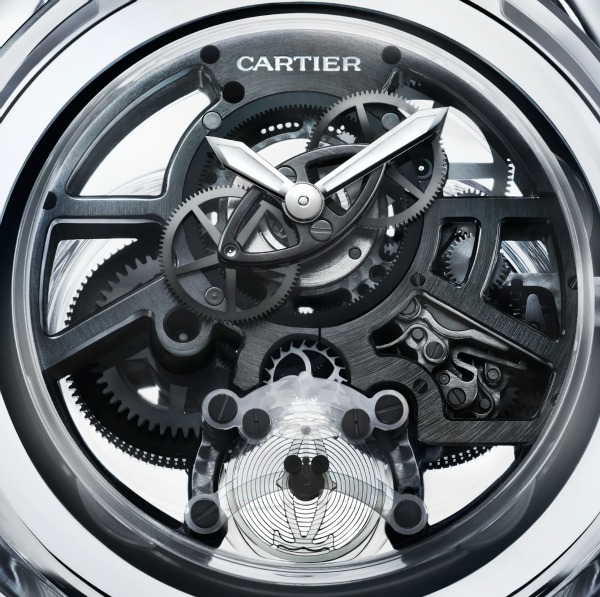 Cartier is happy to point out that the ID Two watch is so efficient it has a power reserve of 32 days between double mainspring barrels. Yup, over a month. They needed to outshine the Lange 31 by just one day didn’t they? The mainsprings in the ID Two are made not from metal, but from fiberglass. Imagine that. This material is said to hold much more energy than metal and it shows with the incredibly long power reserve which is based on the fiberglass springs and the ID Two movement’s incredible power efficiency. It is worth noting of course that the another element helps efficiency. That is a new type of gear train that sends power from the escapement to the hands. Cartier claims that the ID Two produces 30% more power than standard watches, and uses half as much energy. With numbers like that you can begin to understand what is accomplished. 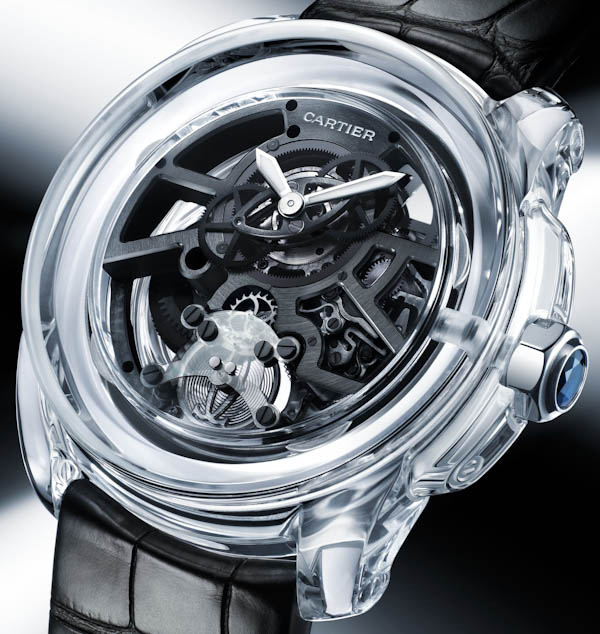 The ID Two concept watch isn’t about telling the time or even precision as far as I can tell. It is about Cartier showing the world that it is focused on developing unique and innovative technology that places a halo on the rest of their products. The ID Two watch technology will hopefully make it to upcoming watches. A bit of it already has actually. Cartier has produced a limited edition version of the Astrotourbillon with carbon crystal parts. More on that another time. As far as metal goes, it has been fun, but in a perfect world you will be replaced by unnatural machine grown parts with hard to remember names and clear personalities. The repercussions are a world that removed the more human side of high-end watch making and the traditions the industry is so steeped in. So give it ten years and let’s see where things are.