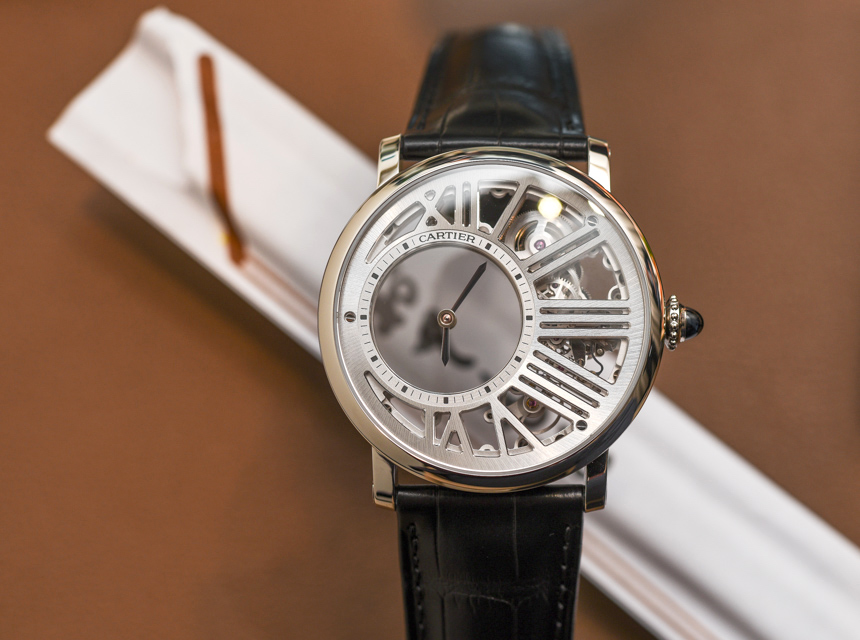 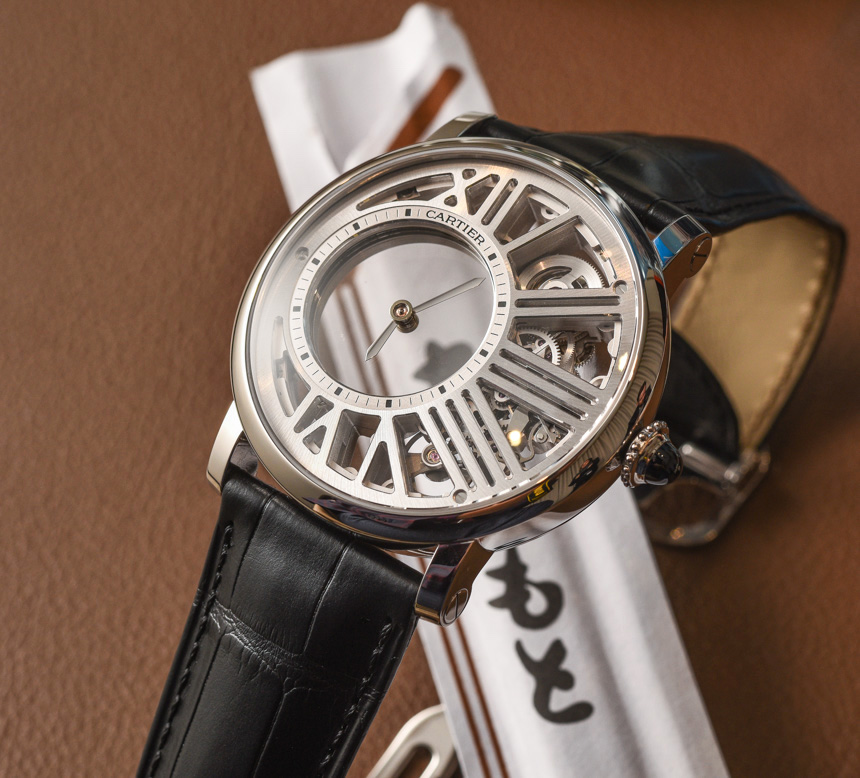 I’ve always had a major soft spot for Cartier watches, especially high-end ones. The particular blend of technique, design, and a traditionally Parisian take on luxury makes them feel both conservative and full of personality. The Rotonde de Cartier Mysterious Hour Skeleton (debuted here) is a good example of what to look for when you want a Cartier that is much fancier than the ones most people have, but not so exotic as to make it challenging to wear on a regular basis. 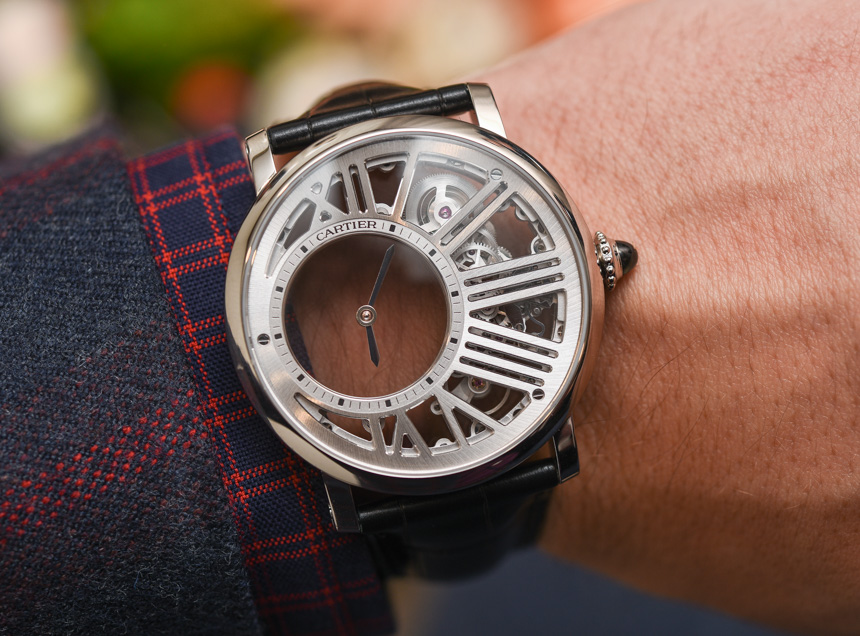 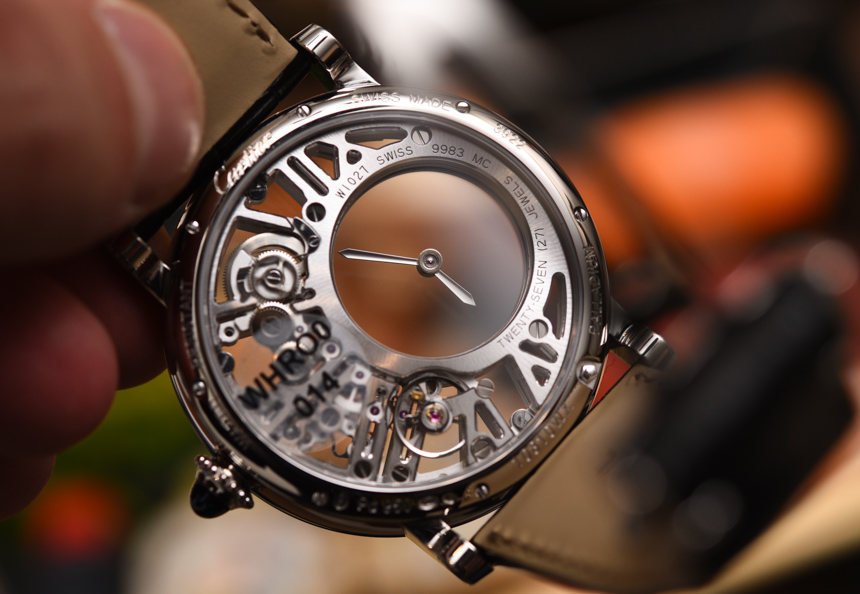 Cartier recently announced that their Haute Horlogerie division would significantly slow down production – as I understand it will focus instead on more practical, accessible (i.e. simple and less complicated) high-end watches. Exotic tourbillons and highly technical and original movements which the brand has received many accolades for will be increasingly uncommon as the brand transitions to mostly service existing watches and producing a smaller number of very exclusive watches that I believe will focus more on decoration than a novel movement or mechanism. 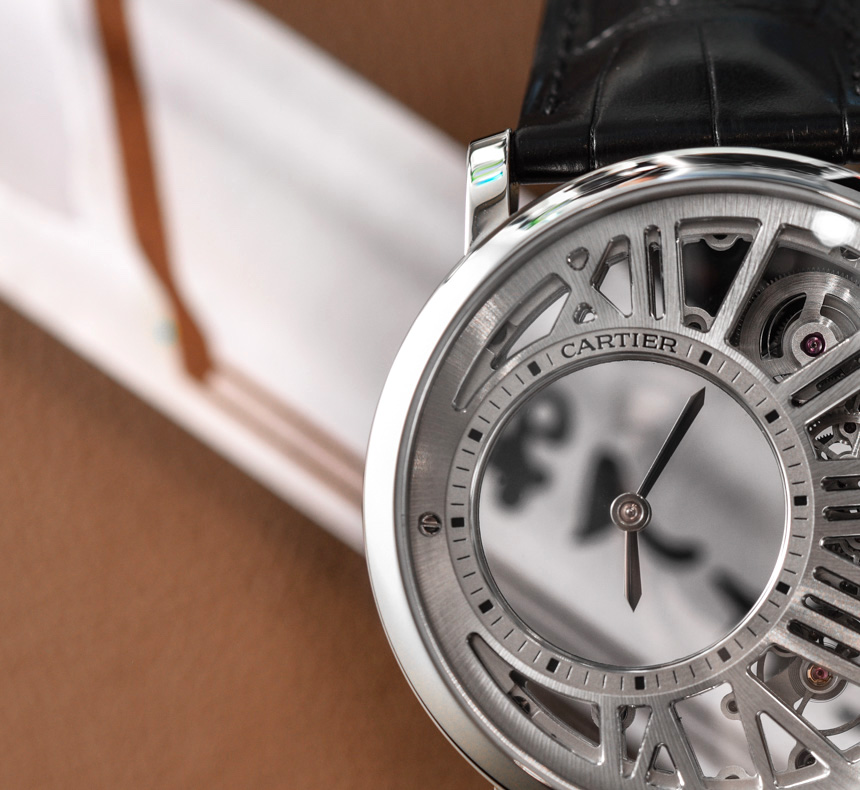 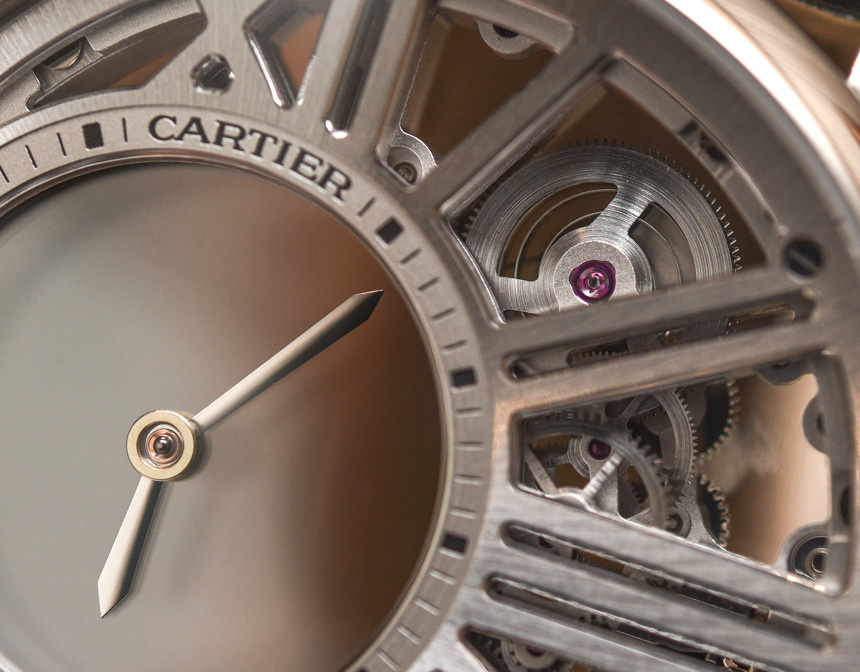 That leads me to believe that for the most part, outside of “piece unique” creations for special customers, watches like the Rotonde de Cartier Mysterious Hour Skeleton might very well represent the top-of-the-line products Cartier makes for men. The watch is actually a combination of three existing items at Cartier, and that includes the Rotonde-style case, “mysterious” movement which has the hour and minute hands on a transparent plane, and on top of that, skeletonization of the in-house made caliber 9981 (which then becomes the caliber 9983) manually wound movement. 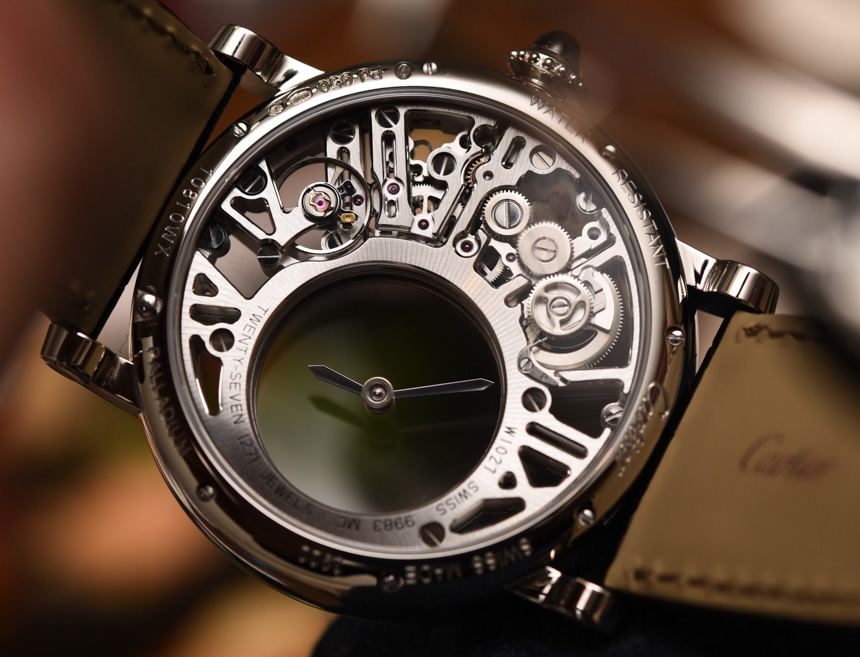 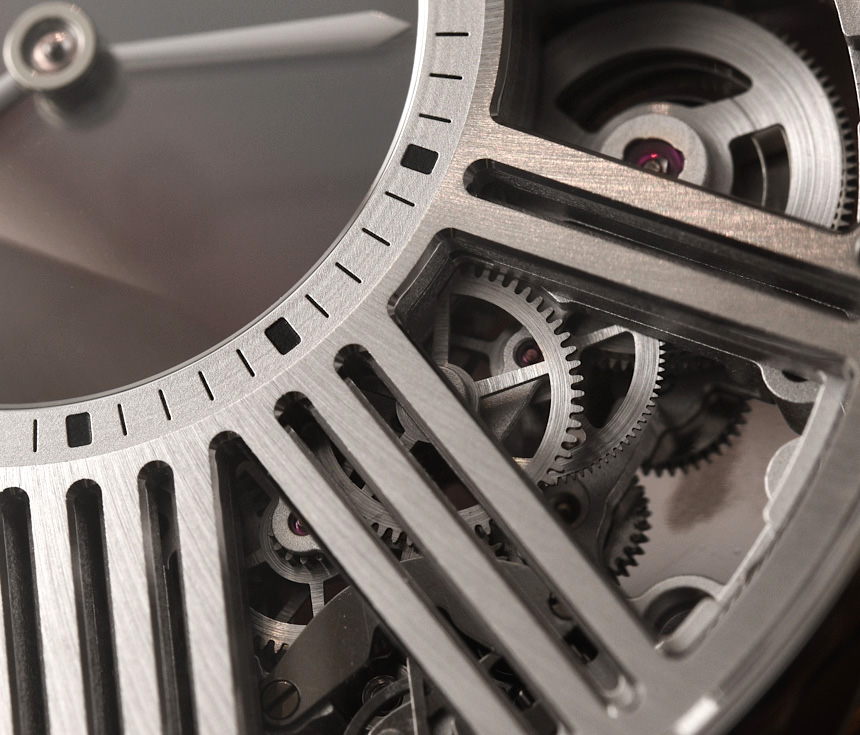 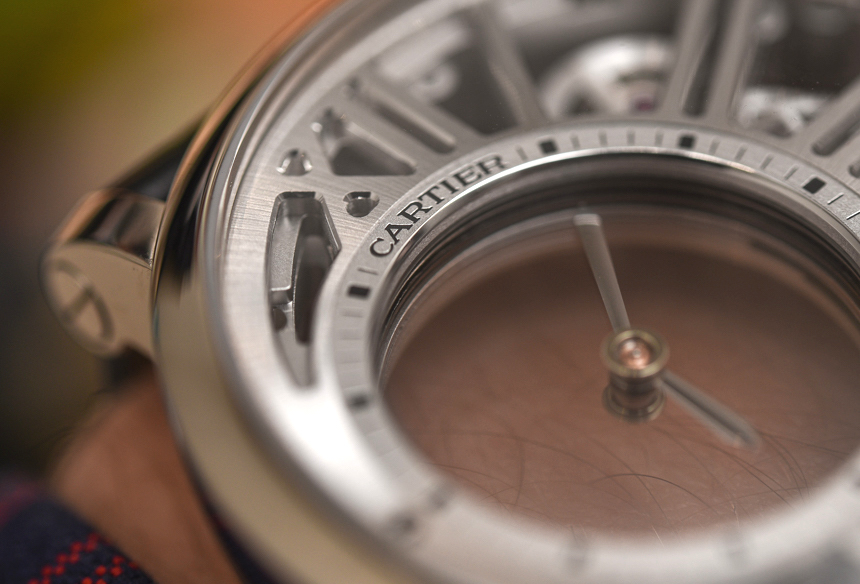 Such designs have a long history going back to early 20th century table clocks produced by Cartier. At the time, it was en vogue for some brands (Cartier included) to produce mystery dial clocks. Many of these Art Deco style creations celebrated the intriguing optical illusion created when the hands were not mounted to the dial via a stem as is the case in a traditional watch, but rather mounted on a transparent plate, which itself features hidden gearing used to move it around the dial. 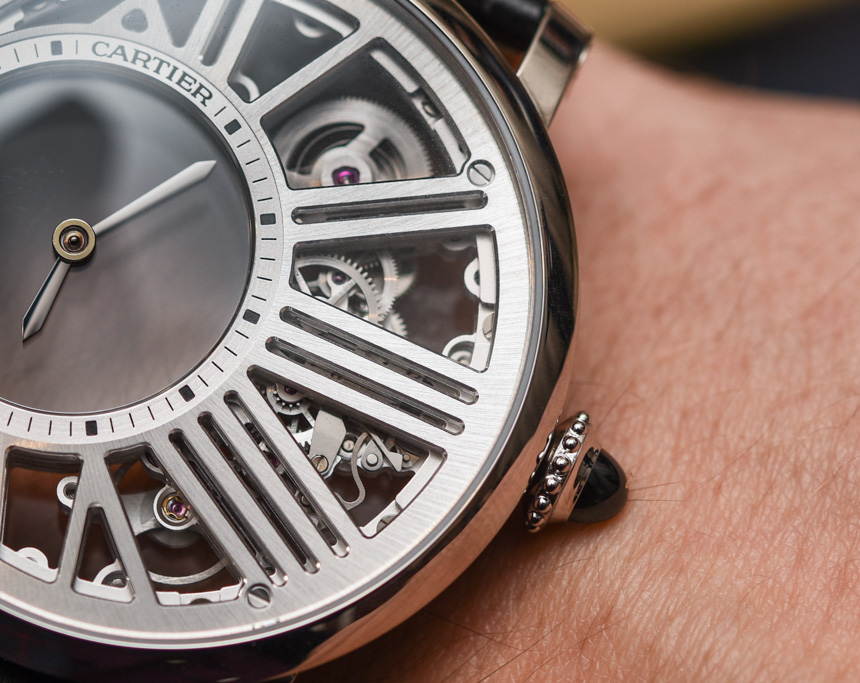 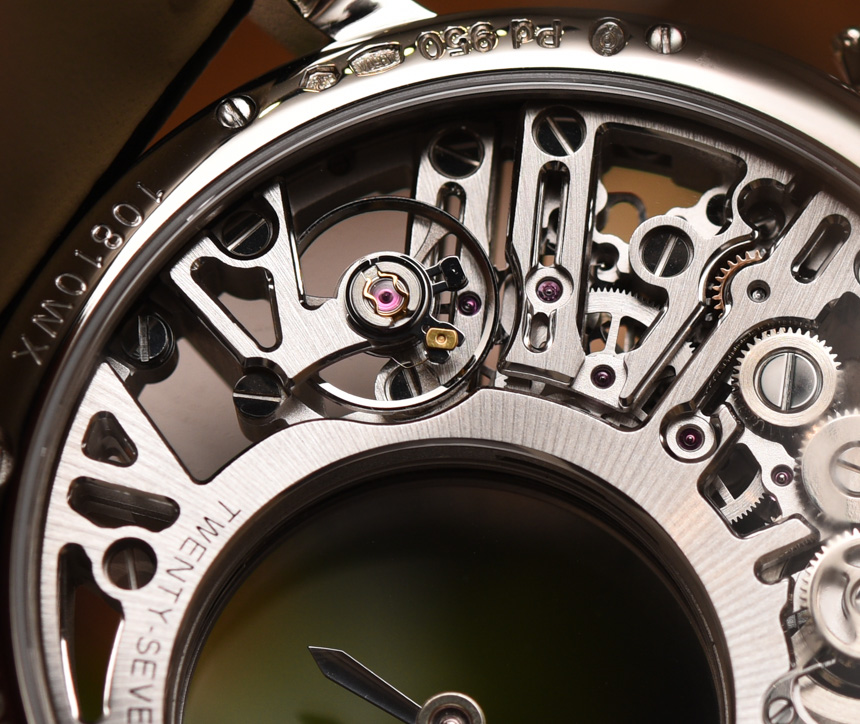 A skeletonized mystery watch is ironic since the skeletonization part sort of “ruins” the mystery. I’ve not seen anyone comment on this, but it wouldn’t stop me from having an otherwise enjoyable experience with a product such as this. In fact, if you liked the original Mystery Hour watch but wanted to “see even more,” then this Skeleton version might be right for you. Note that the privilege of having a skeletonized version of the Mystery complication watch will cost about $15,000 USD more than the non-skeleton model. 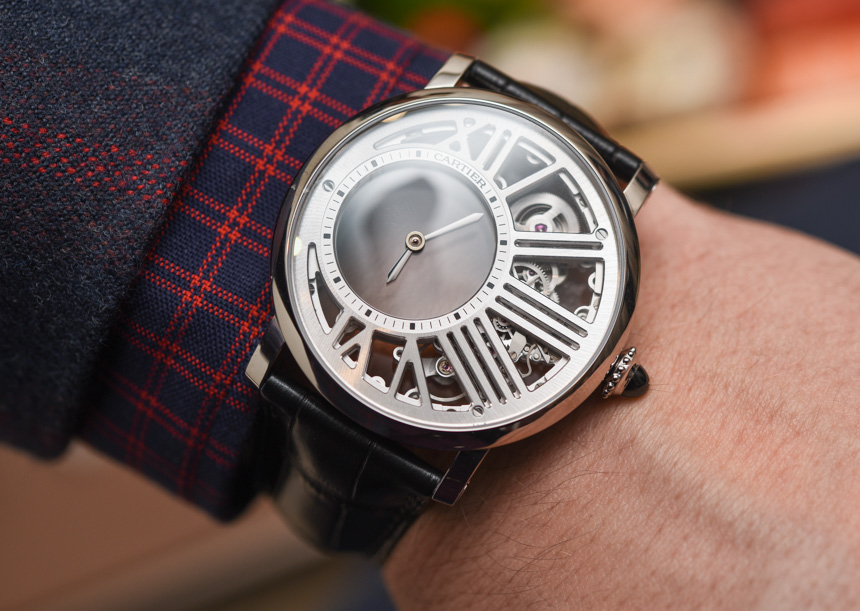 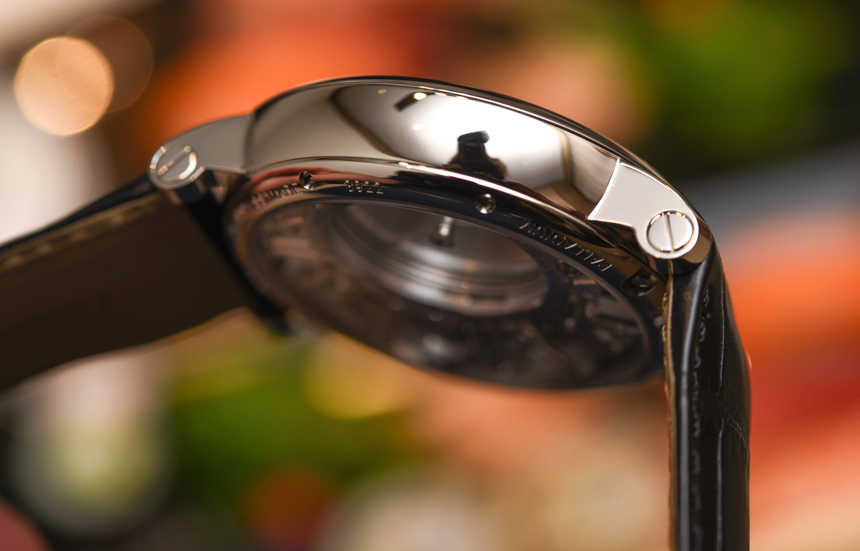 At 42mm wide in palladium (exclusively for now I believe) the Rotonde de Cartier Mysterious Hour Skeleton is just as wearable and comfortable as any Rotonde model. Why palladium? Good question; Cartier likely wants to know if you find the exotic and of-questionable-utility rare material exclusive. The round-case has a bit of French flair (even though it is Swiss Made) with its signature Cartier-style crown with blue sapphire crystal stone cabochon (note while in the past Cartier used mainly blue sapphire crystal for the cabochon, only its higher-end models these days get sapphire while more mainstream-intention models have blue spinel), and attractive, rounded bezel matched to the lugs. 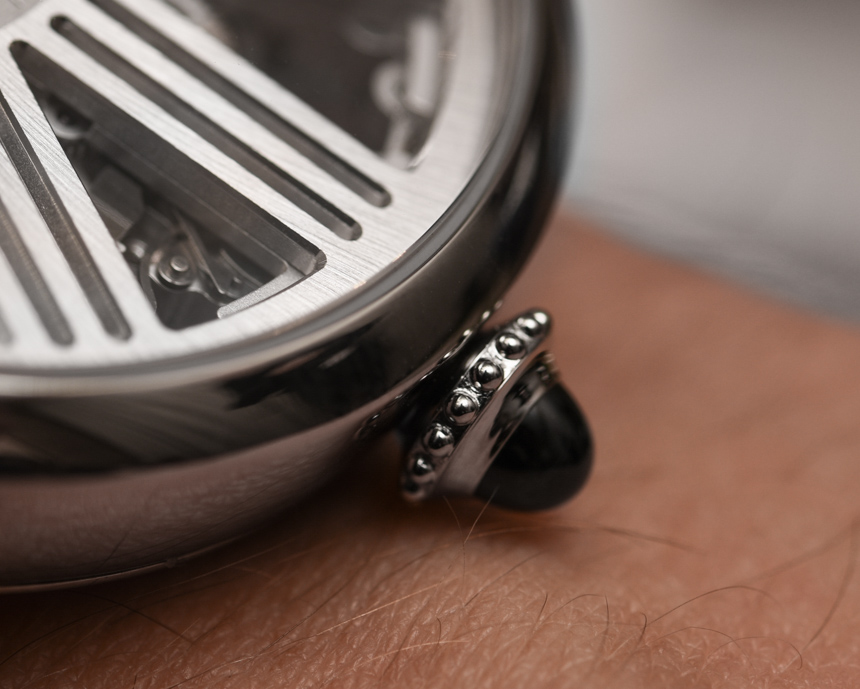 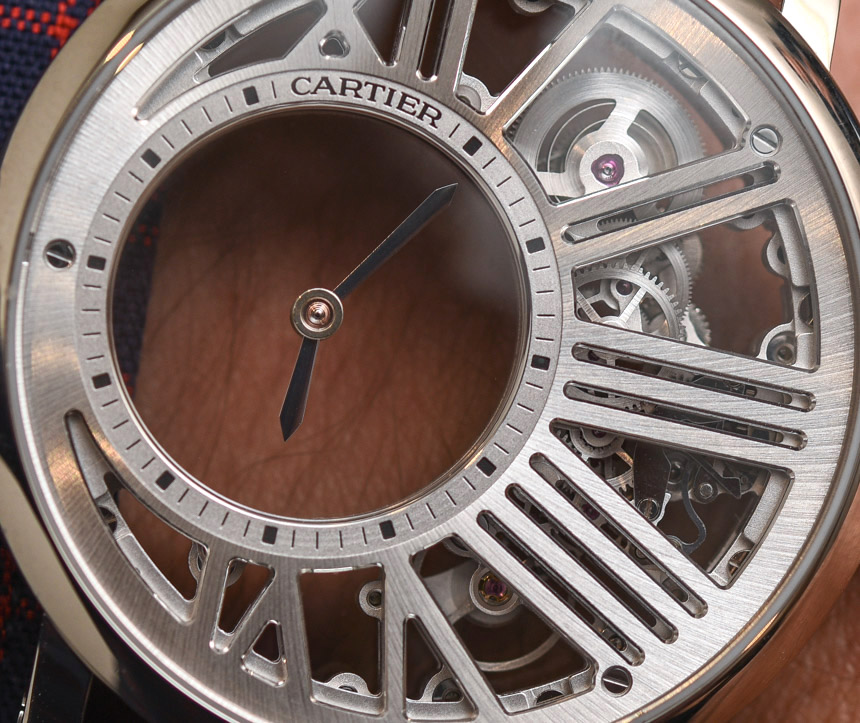 Compared to the Cartier Cle version of the Mystery Hour Skeleton, the Rotonde models’ caliber MC 9983 is more… well skeletonized. Cartier really wanted to make sure that the “open” look of the movement matched the theme of the open look of the dial. In essence, the goal seemed to be that the user can see through as much of the watch as possible. I think the result is lovely, save for those people who aren’t interested in checking out their own arm hair and skin on a regular basis when glancing at this otherwise beautiful watch. 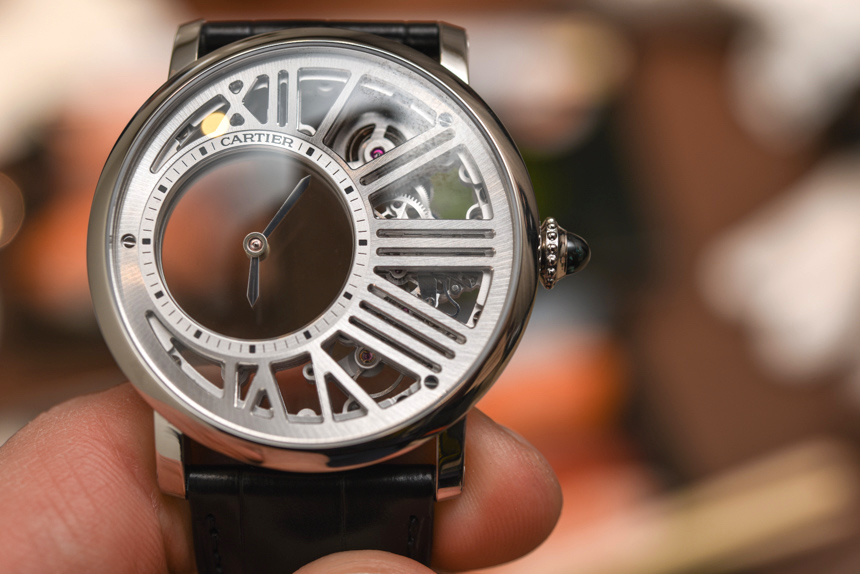 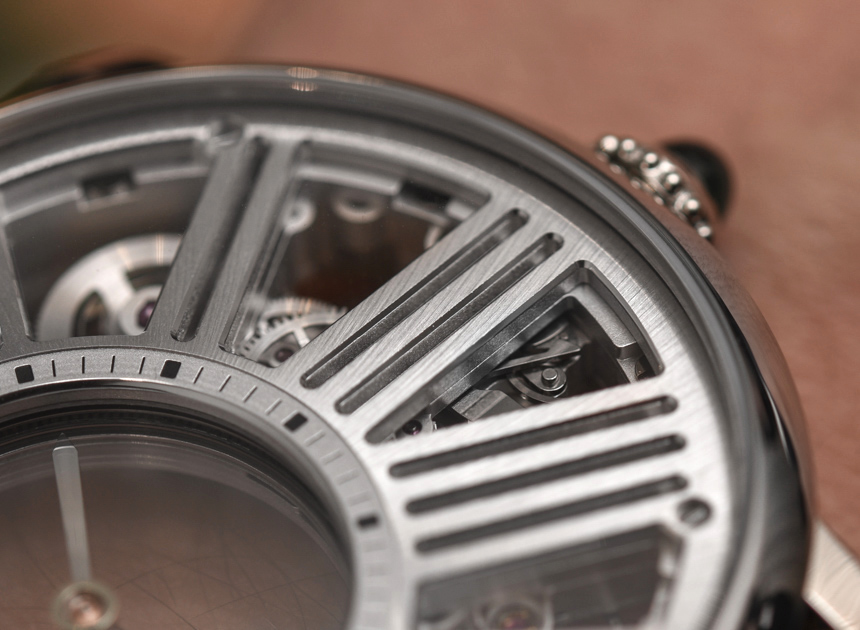 The movement uses two sapphire crystal plates upon which the hands are set. There is a traditional mounting system in the middle where the central axis point of the two sapphire crystal discs connect. Gears to the right of the hour and minute dial move these discs, which in turn move the hands. Framing all of this, and part of the movement, is the hand-finished plate which includes “structural” Roman numeral motifs. The overall look is great, though it isn’t the common decorative style one might consider when imagining a hand-finished mechanical watch movement. Cartier opts for a more modern, arguably masculine look for its particular aesthetic when it comes to skeletonized watch dials and movements. 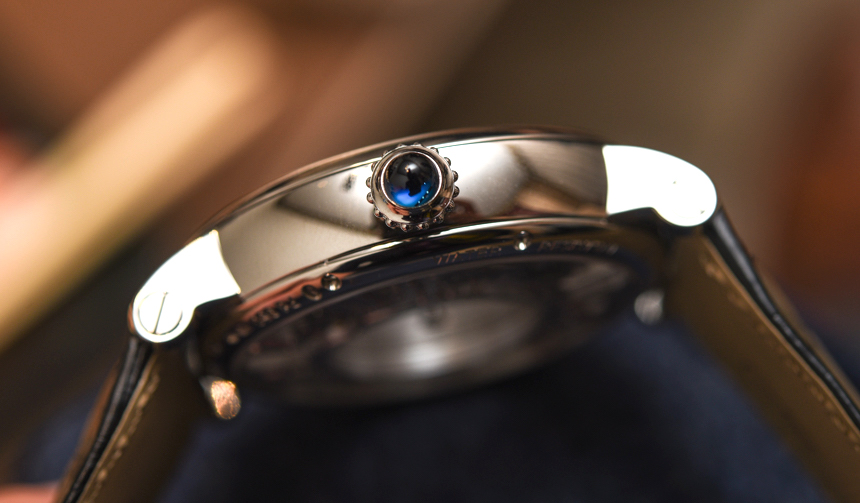 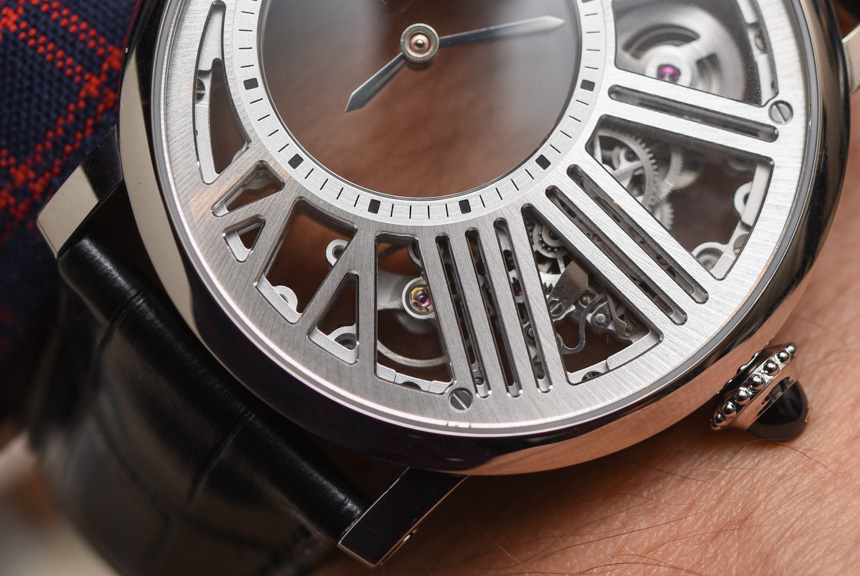 The entire watch is 11.9mm thick (again, 42mm wide) making it both bold but also wearable under sleeves. If there was ever a luxury statement watch for guys who love mechanical movements – something like the Rotonde de Cartier Mysterious Hour Skeleton watch is it. You get the power of a well-known name, lots of authentic horological technique, and refined design along with a enviable mechanical movement on your wrist.

Cartier is thus wise to “mix and match” its movements and cases in order to offer the widest spectrum of looks and styles for its customers. Compared to many more niche luxury watch brands, Cartier arguably is better positioned to ask for luxury car prices for a watch. It is well-established that the popularity of a luxury product’s brand name is directly related to the price a brand can command. Thus, being one of the few watch brands out there with a relatively well-conceived approach to marketing and overall brand awareness, Cartier is perhaps more legitimately able to ask for the Rotonde de Cartier Mysterious Hour watch’s retail price of $75,000 USD. cartier.com