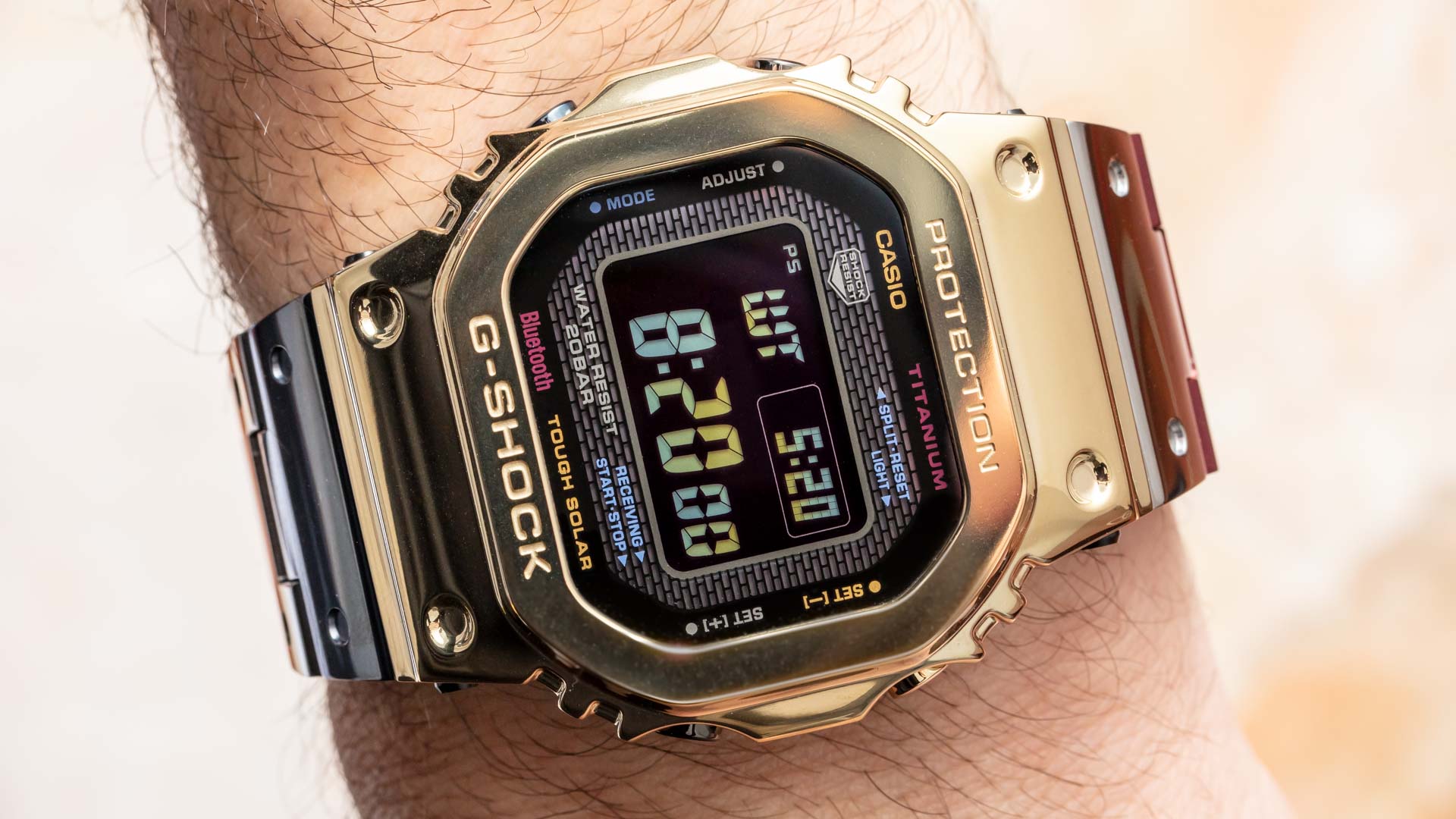 Color, in many ways, is the current frontier of watch design. As brands across the industry are releasing designs with more dial colors than nearly any other time in modern watchmaking history, advancements in materials and case coatings have allowed cases and bracelets to become a new canvas for chromatic experimentation. With the depth and breadth of the massive G-Shock line, Casio carries one of the most colorful stables in modern watchmaking, but for its latest release it pushes both color coatings and metallurgy to bold new heights. As much a technical showcase as it is a wearable watch, the new limited edition Casio G-Shock GMWB5000TR-9 offers a striking multichromatic take on the classic rugged full metal G-Shock design. 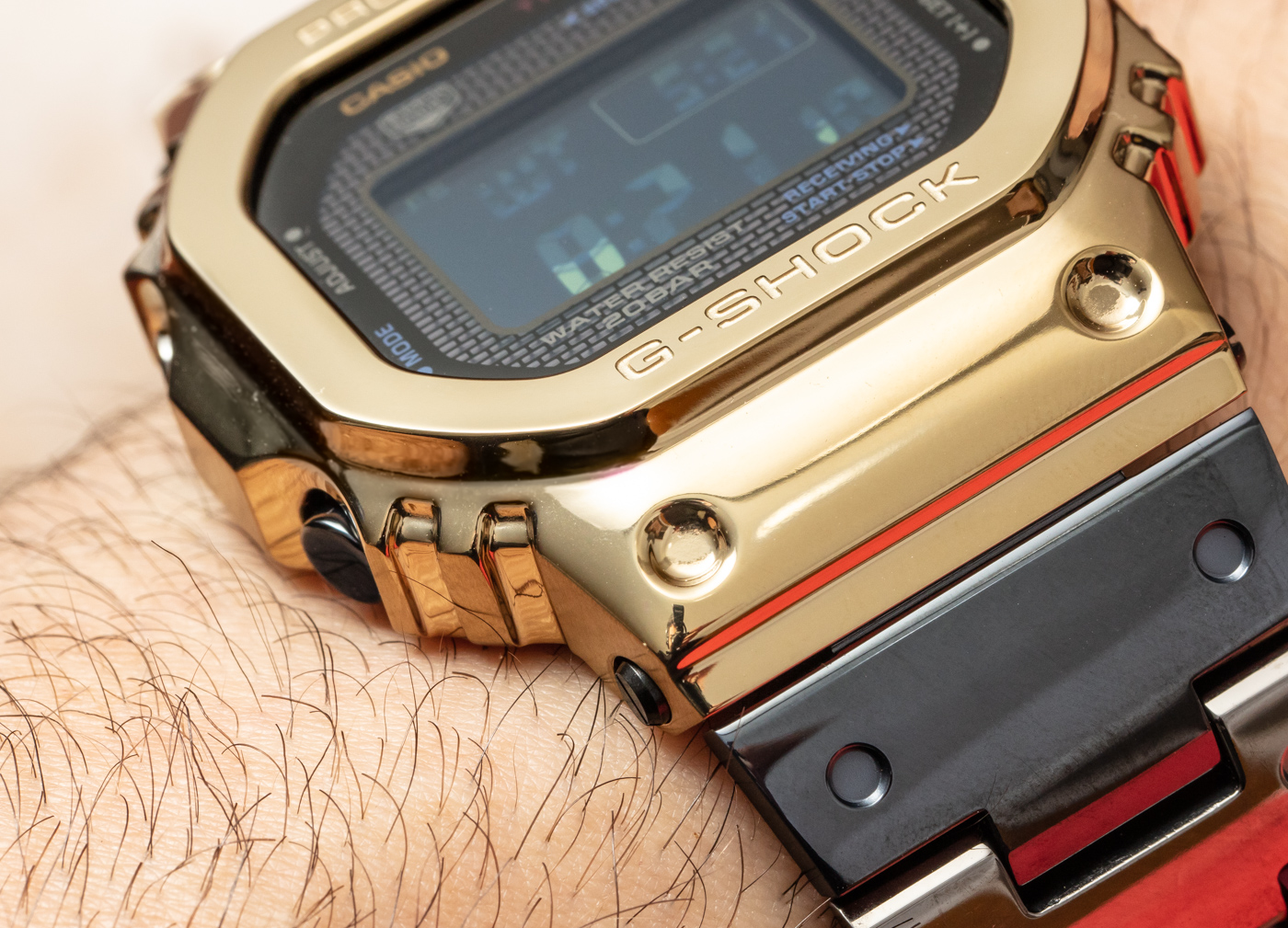 The 43.2mm by 49.3mm case of the Casio G-Shock GMWB5000TR-9 follows the original G-Shock’s mix of industrial and organic cues with its squared off integrated bracelet design. Where this familiar shape takes a turn, however, is with its materials. Full metal interpretations of the original square G-Shock are nothing new, but until now these models have primarily been stainless steel or matte titanium. The GMWB5000TR-9 is the testbed for Super-TIX120AFG, a proprietary titanium alloy developed jointly by Casio and Nippon Steel Corporation over the past six years. While this new alloy is as light and as hypoallergenic as standard titanium, Super-TIX120AFG is approximately twice as hard as most titanium alloys. In addition to immense scratch resistance, this new harder alloy is far easier to polish than traditional titanium, allowing this new model to sport the mirror finish that has become a staple of the full metal G-Shock line. 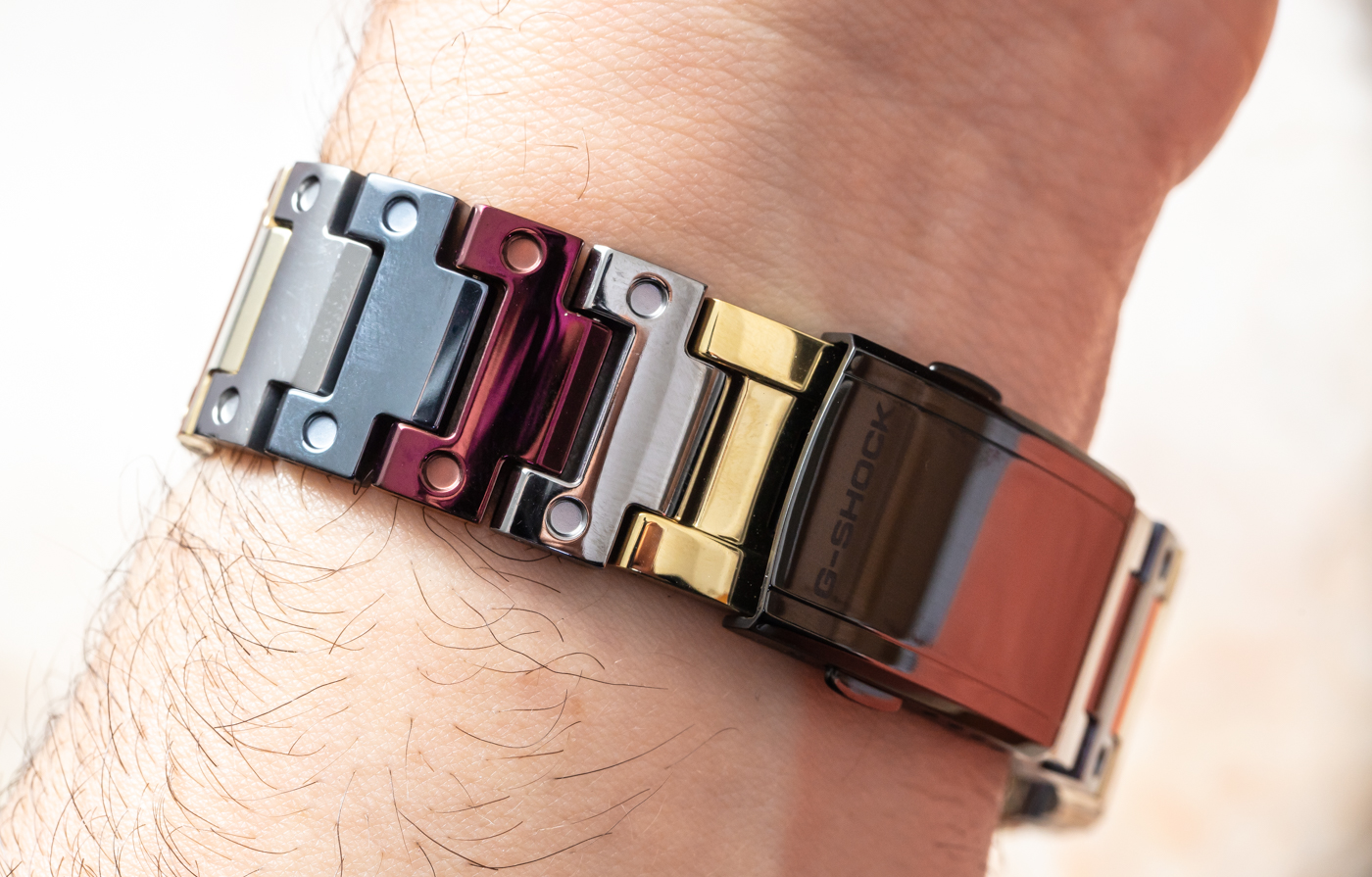 Beyond the new case material, the G-Shock GMWB5000TR-9 is also a showcase for Casio’s ion plating techniques, combining a gold IP main case body with pushers and bracelet links in ion plated wine red, silver, anthracite gray, desaturated steel blue, and gold. Each of the tones is deep and distinct, and the patchwork effect simultaneously calls to mind the Volkswagen Golf Harlequin of the mid-‘90s, Lego bricks, and traditional quilts. It’s an unapologetically bold look on the wrist, but as a conversation piece few G-Shocks can conceivably match it. Like all G-Shocks, the GMWB5000TR-9 offers a robust 200 meters of water resistance and immense shock protection. 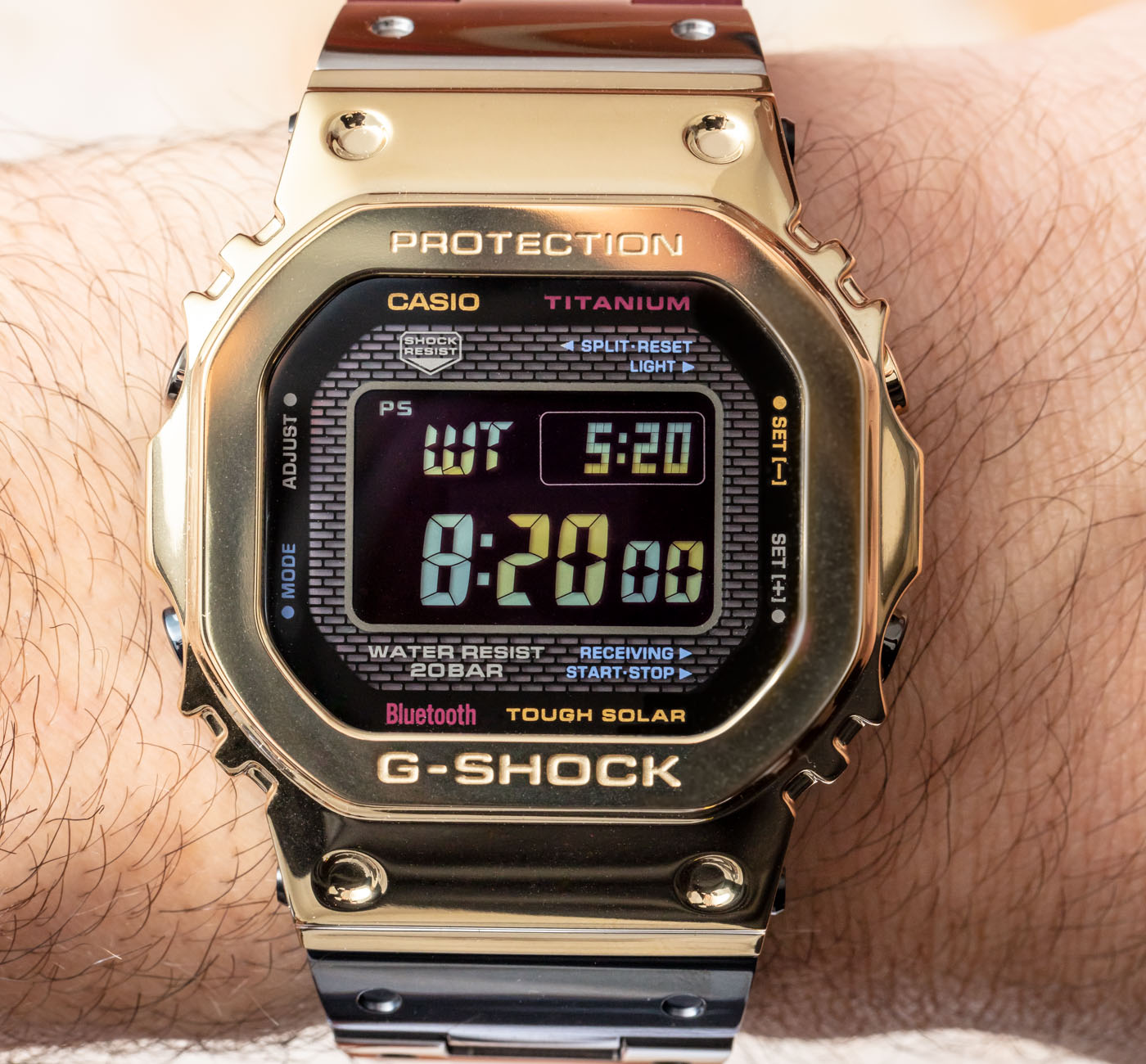 While not quite as aggressive as the case or bracelet, the dial of the Casio G-Shock GMWB5000TR-9 also experiments with color in a novel way. Highlights in pale yellows, blues, reds, and grays punch up the familiar inner bezel and rehaut layout. The inverse LCD digital display gives the GMWB5000TR-9 a sportier case, and this darker dial treatment keeps visual attention on the new elements of the case and bracelet. 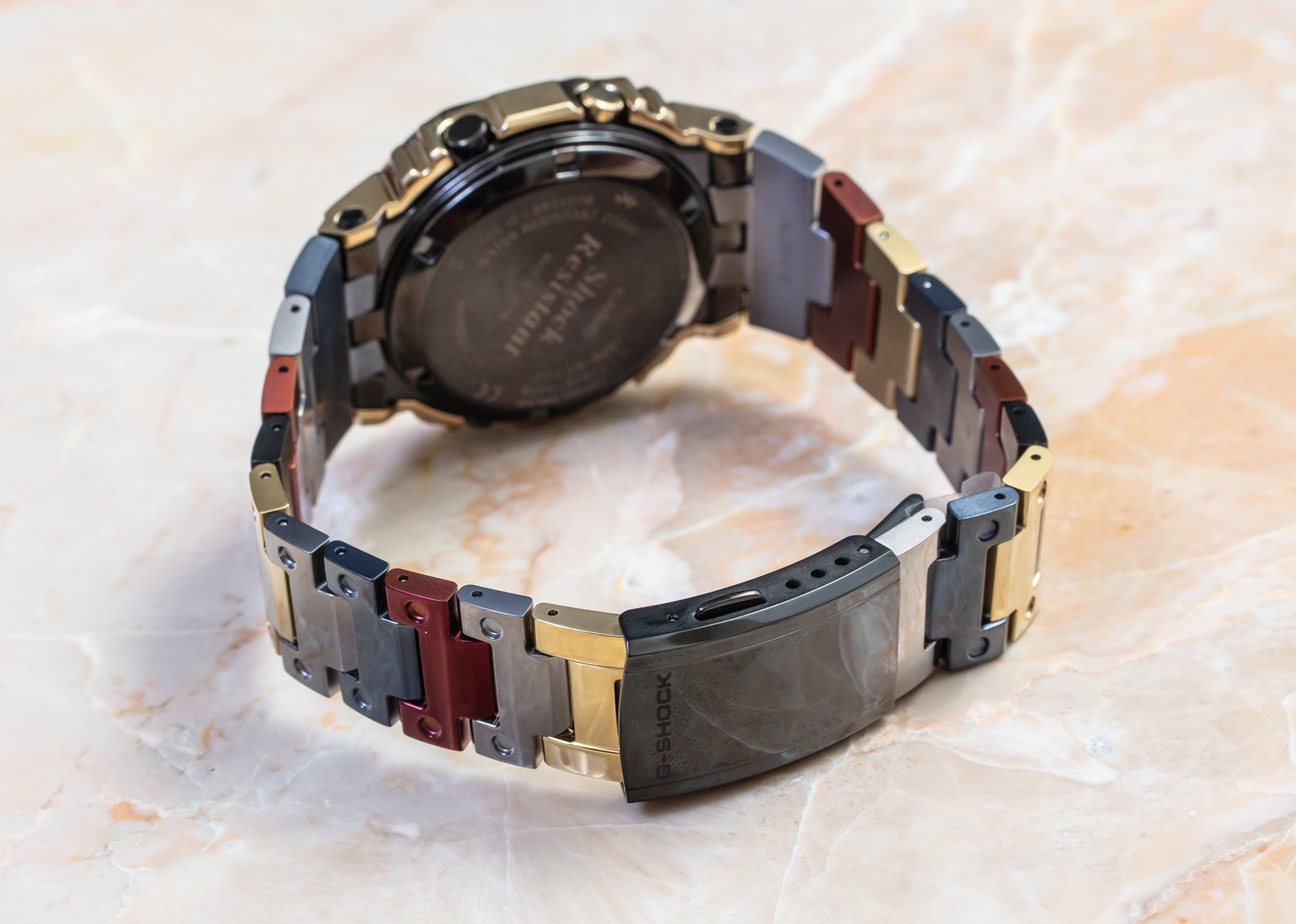 Casio powers the G-Shock GMWB5000TR-9 with its in-house 3458 digital quartz module. The 3458 is one of the brand’s upscale modern takes on the traditional G-Shock formula, incorporating advancements like Tough Solar charging technology, wireless mobile device connectivity via Bluetooth, and radio controlled Multi-Band 6 atomic time correction signals six times per day. Like most G-Shock modules, the 3458 packs in a wide variety of complications, including an LED dial backlight, a world timer capable of simultaneously tracking five time zones, automatic switching for daylight savings time, a 1/100 second split seconds chronograph with a 24 hour duration, a 24 hour countdown timer, five daily alarms, a perpetual calendar accurate through the year 2099, and up to 22 months of battery life after a full solar charge.

With its bold and colorful take on the familiar G-Shock look, the limited edition Casio G-Shock GMWB5000TR-9 is one of the most materially impressive and striking recent releases in the mainline G-Shock series. However, the advanced titanium alloy and extensive ion plated finishing lead to a steep premium over its stainless steel counterparts, which may prove unpalatable to some enthusiasts. Although the G-Shock GMWB5000TR-9 is a limited edition release, Casio does not specify how many models will be produced. The Casio G-Shock GMWB5000TR-9 is available now through authorized dealers at an MSRP of $1,700. For more information, please visit the brand’s website.