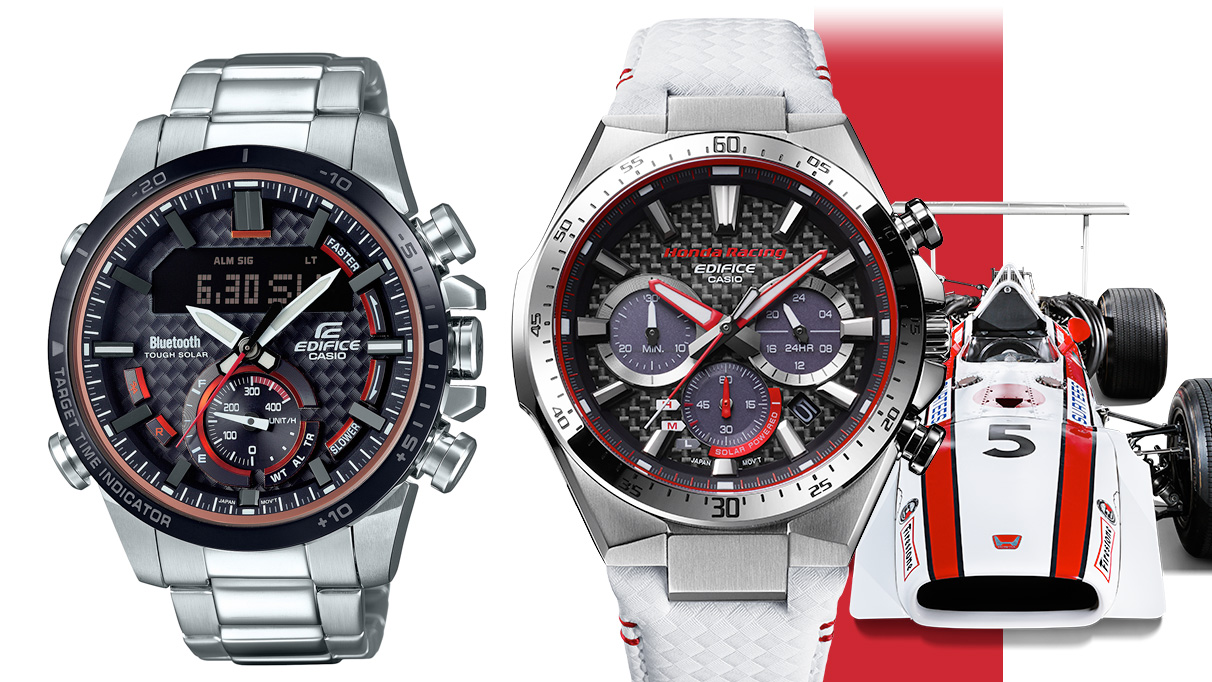 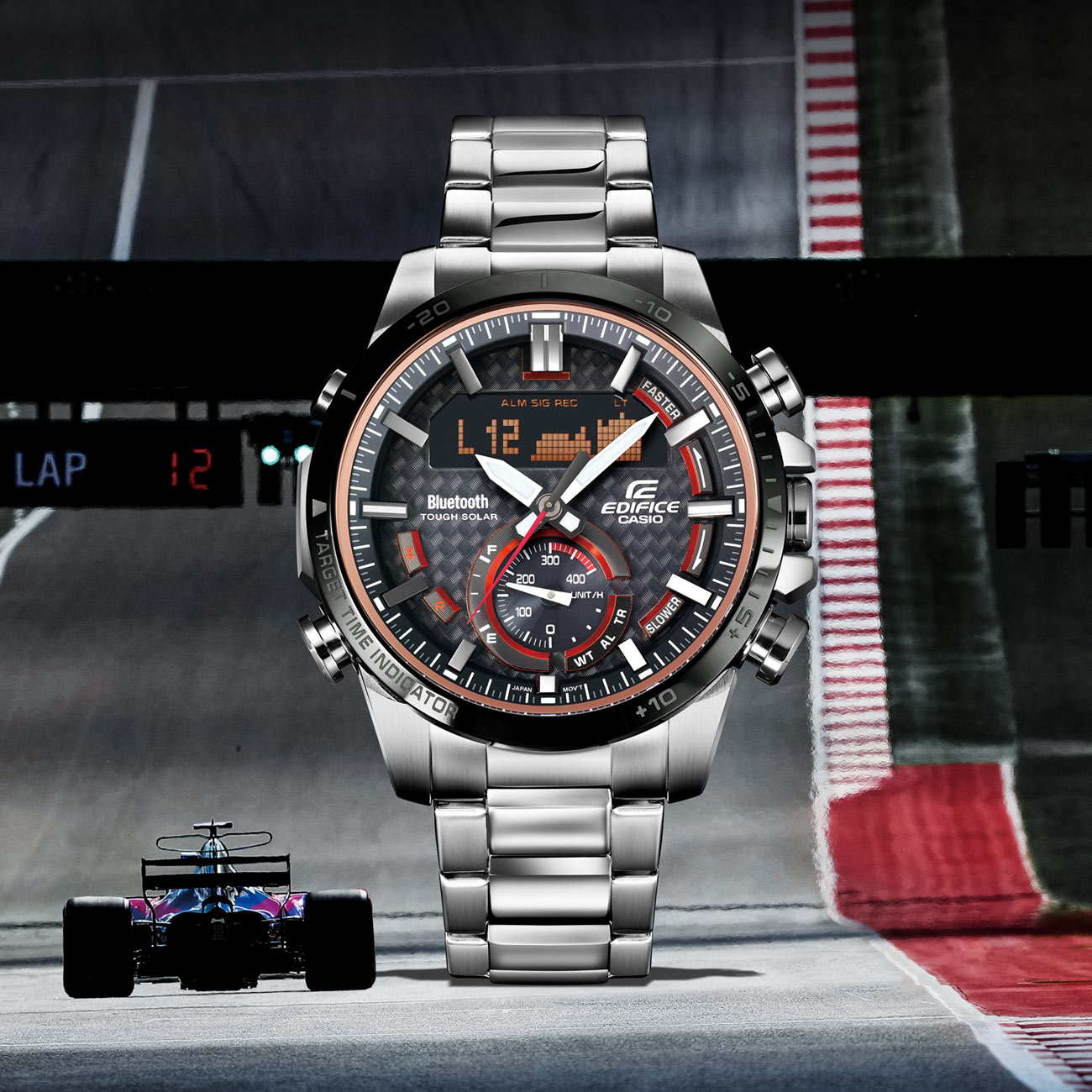 Introducing the new Casio Edifice EQS-800HR and ECB800DB-1A watches, both inspired by motorsports and centering around the Edifice brand’s concepts of “Speed and Intelligence.” Casio’s Edifice sub-brand has always built upon a chronograph foundation, often with the racing associations that it brings. As Casio watches, of course, they also incorporate the practical Japanese technology that expands on that with a multitude of features. The Casio Edifice ECB800DB-1A and EQS-800HR watches could, in fact, be seen as a representative sampling of the current Edifice lineup’s divisions.

The two watches we are looking at today are similar in several important ways and then differ in others. Both have steel cases and carbon fiber dials, the latter due to that material’s importance to the racing industry. Both are solar-powered and have adopted a red and black color scheme throughout. Both have a chronograph and associated functions, plus world time, and others. An easy way to begin to understand the Edifice world is that it can be broken down into Standard (EFR, EFV, and ERA), Solar (EQS), and Bluetooth (EQB and ECB) families identified by the cryptic letters before their reference numbers. Forget about the Standard for now, and let’s look at these Solar and Bluetooth models. 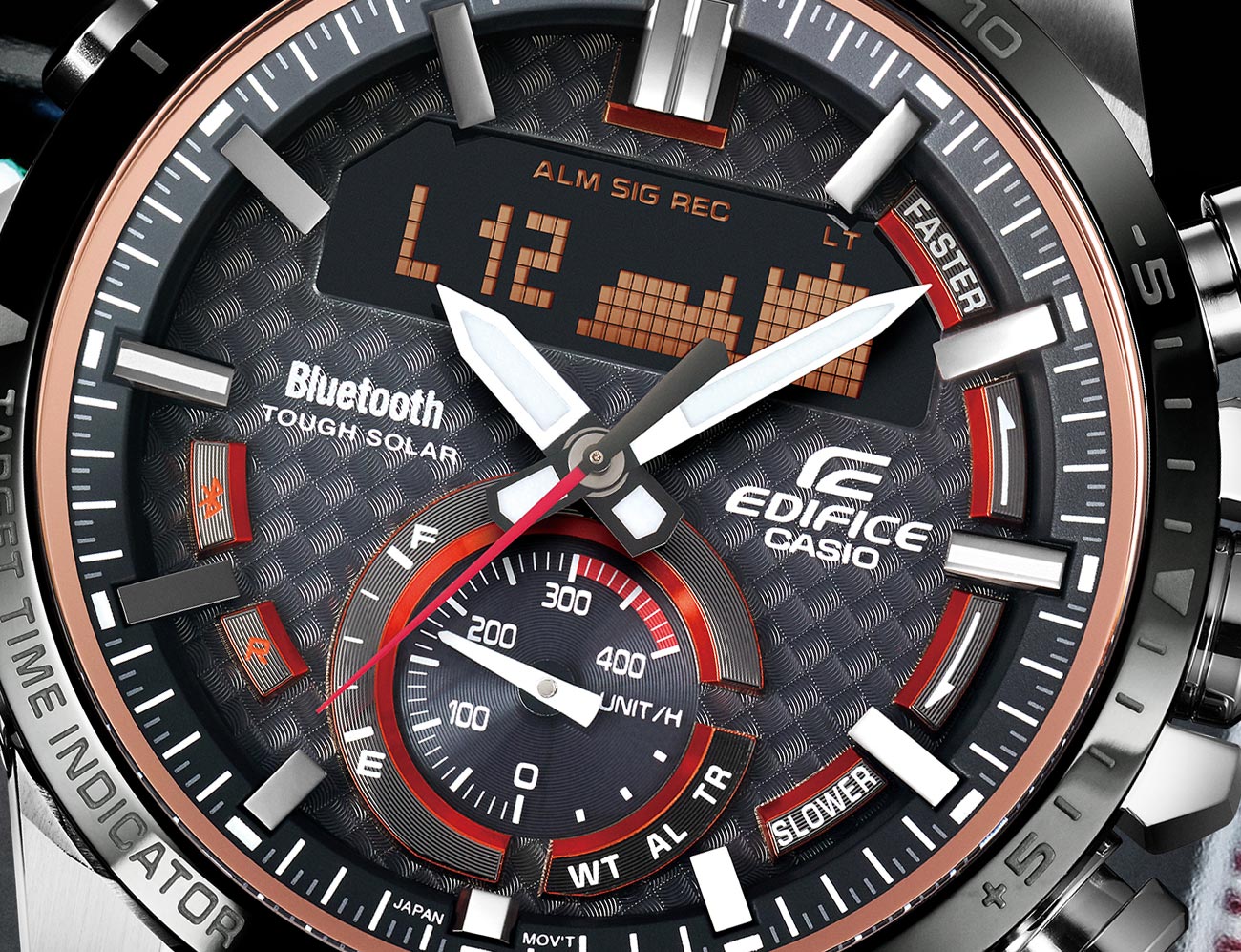 While many Edifice watches offer a lot of similar functionality, they also differ markedly in styling and how information is displayed. The Casio Edifice ECB800DB-1A incorporates a digital display in addition to its traditional handset and subdial and offers a bold if busy design that stands out on the steel bracelet. As a Bluetooth ECB family watch, the Casio Edifice ECB800DB-1A offers a range of connected functionality (“Mobile Link Technology”) via the Casio mobile application. This allows the watch to access the current exact time for 300 cities worldwide (including daylight savings information) and sync automatically (four times daily) or manually. More useful but familiar functions include a Phone Finder and alarms that can be set on the app and sounded on the watch. 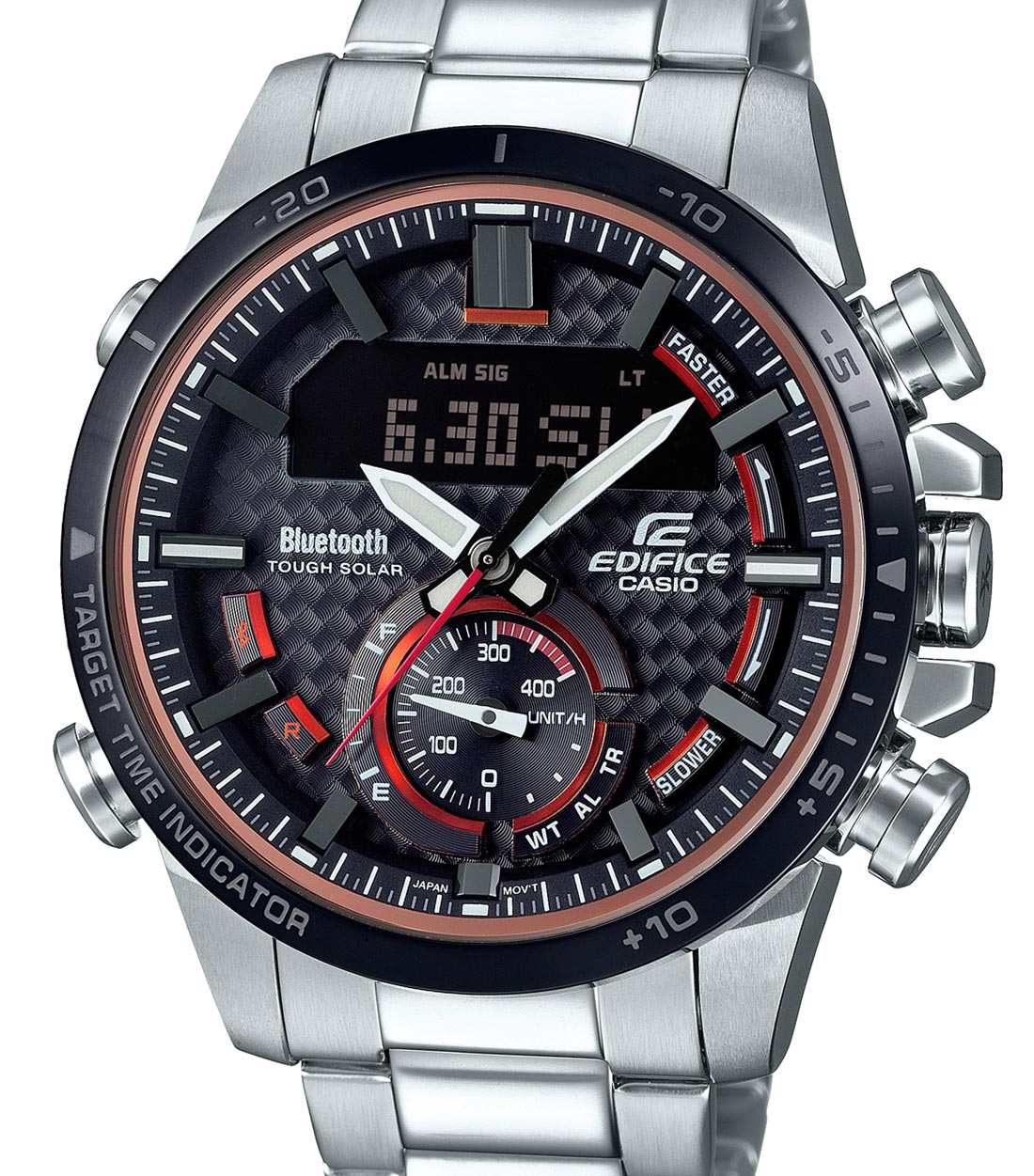 Stopwatch, countdown, laps, daily alarms, and more are standard on many Casio watches and are of course part of the Casio Edifice ECB800DB-1A. The Casio Edifice ECB800DB-1A offers 100m of water resistance and is solar powered, ensuring that your watch is always operating at peak efficiency. Casio makes it a point to mention that solar charging can be used even in low or fluorescent light, and not just in the sunshine. 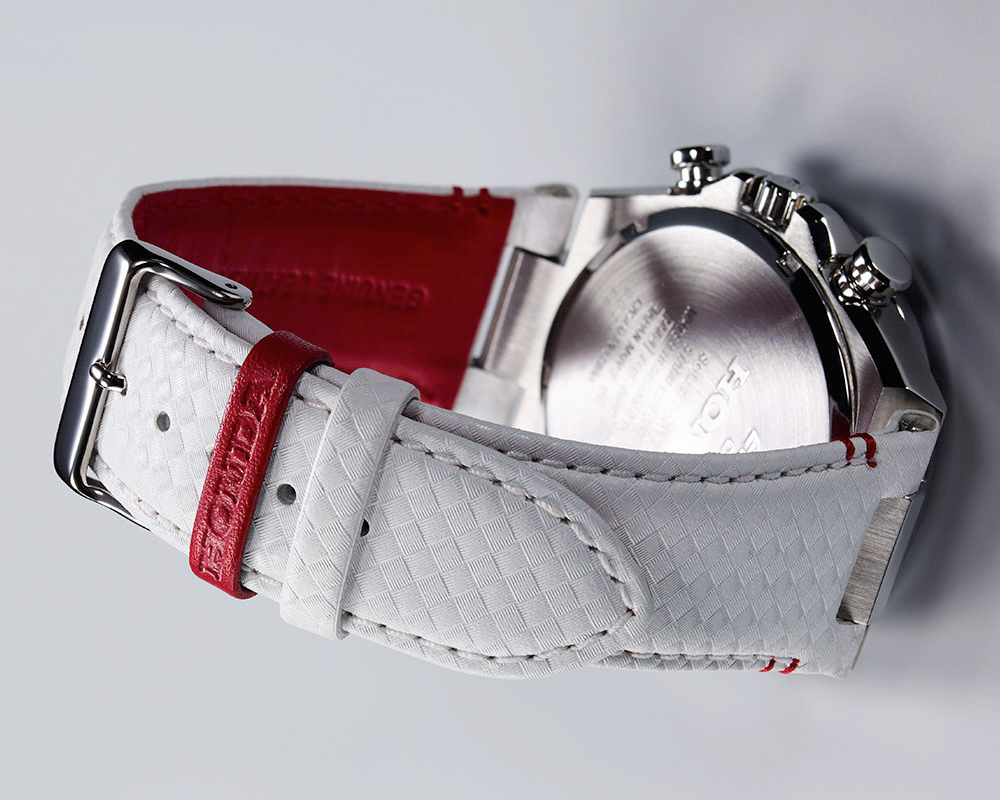 The Casio Edifice EQS-800HR is an interesting counterpoint to its release mate. It is designed in partnership with Honda and has the Honda Racing marking on the dial. This would be a dividing factor for me as I am not a Honda enthusiast, but I do generally like the aesthetic of this piece otherwise and I am guessing I will not be alone in this regard. The Casio Edifice EQS-800HR comes on a white leather band with red lining. Due to the lug construction, it would be difficult to find an alternative strap so the potential buyer would need to be into this look as it’s pretty bold, in my opinion. The Casio Edifice EQS-800HR comes in a special commemorative tin with a card paying homage to the 1968 Honda F1 RA301 Race Car. A more simple solar-powered watch with the look of a traditional chronograph – and that is not connected to one’s phone – has an appeal of its own. 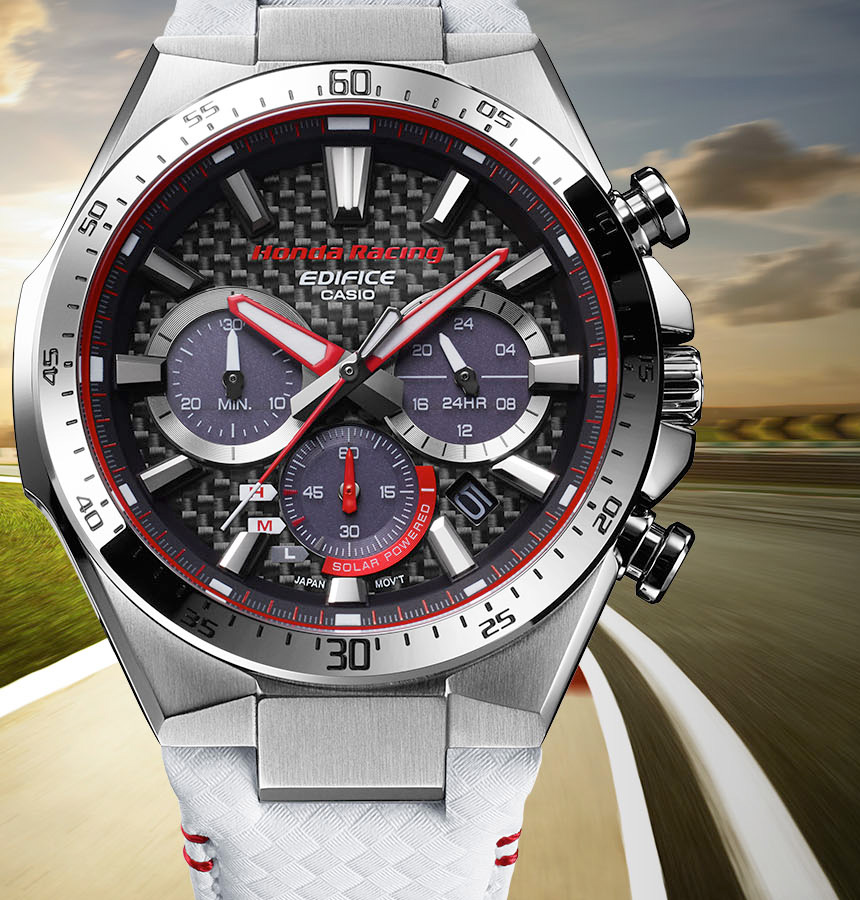 Ultimately, I think a lot comes down to preference and taste, whether you are choosing between these two watches or the many more Casio Edifice iterations available. Of course, the Casio Edifice EQS-800HR and its partnership with Honda Racing will have a special appeal to those motorsport fans. I am particularly attracted to the smartphone pairing capabilities, and various Casio models offer different levels of connected functionality – it can be confusing, but one can delve into Casio’s website to really explore the differences. The Casio Edifice ECB800DB-1A will be available for a price of $270, and the pricing on the EQS-800HR is still to be announced. For more information see edifice.casio.com.