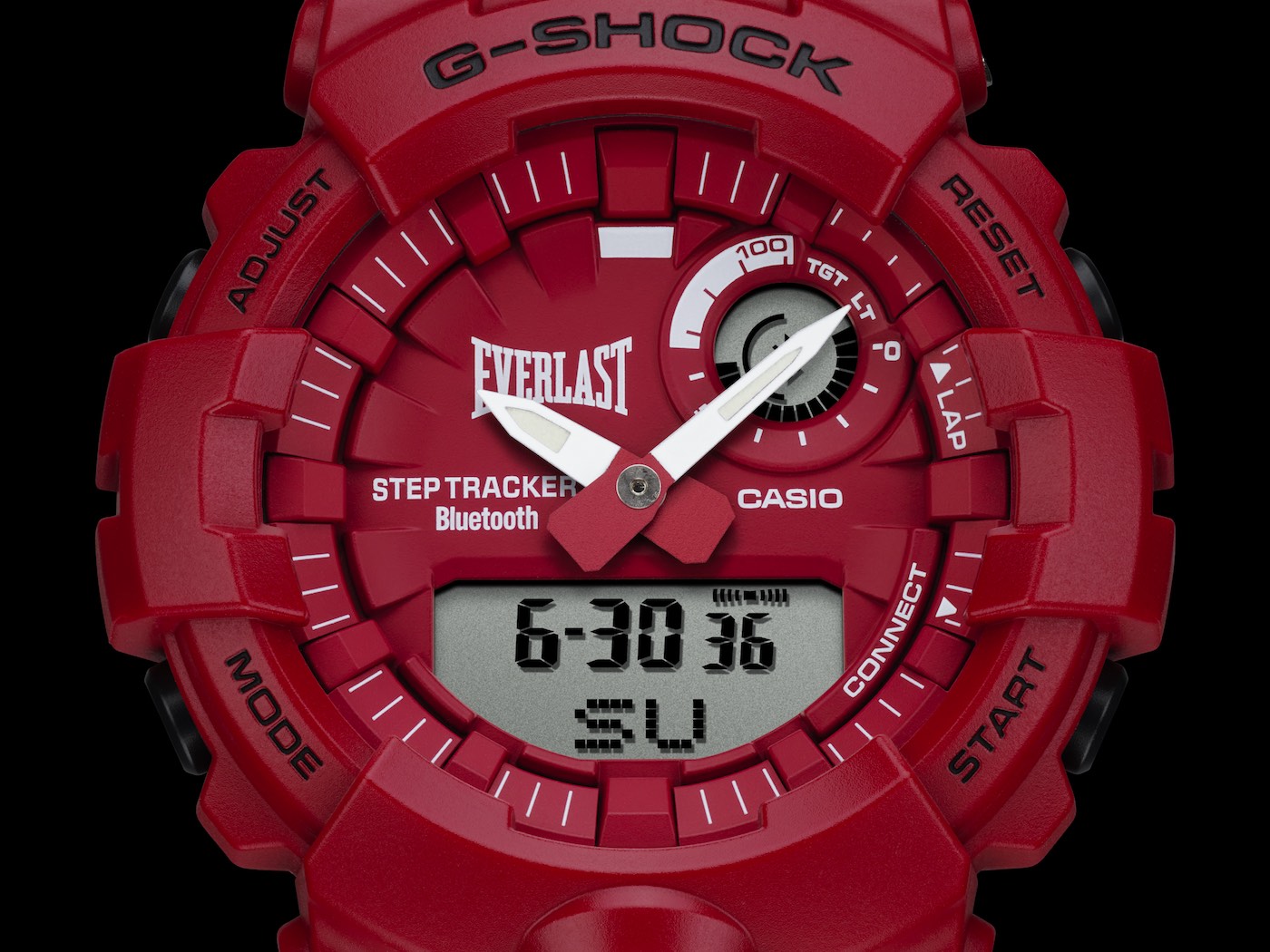 While Casio may not be intrinsically linked to boxing, the latest addition to the G-Shock collection — the Casio G-Shock GBA800EL-4A Special Edition watch — sees the Japanese heavyweight step into Everlast’s corner for a collaboration that has all the vital statistics necessary to challenge for the crown within a voluminous, if often low-quality, price bracket. 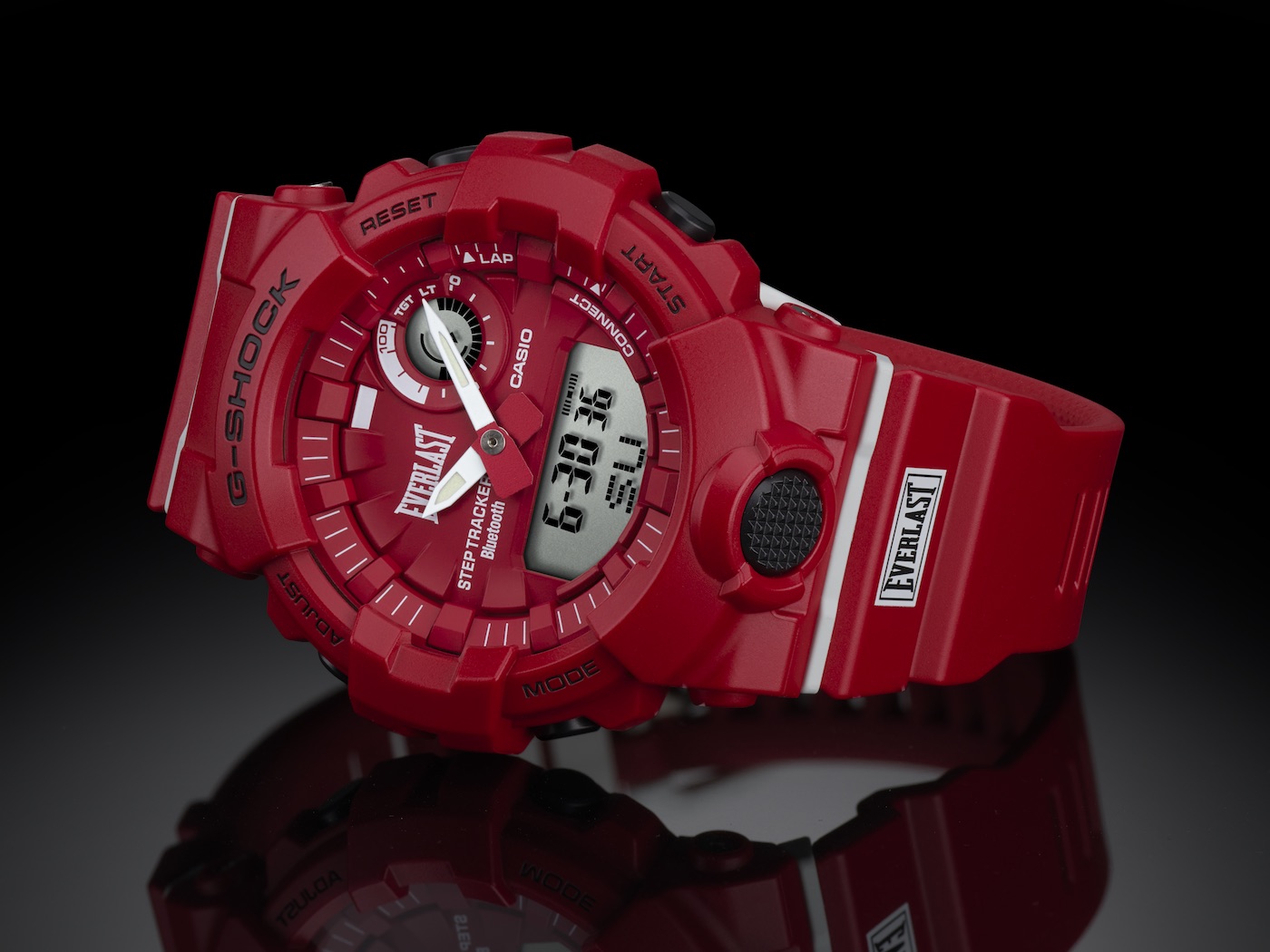 Founded in New York City in 1910, Everlast is a brand whose name is linked with many of the sport’s greatest stars. Associated with pugilists such as Jack Dempsey, Roberto Duran, Joe Frazier, Marvin Hagler, Larry Holmes, Sugar Ray Leonard, and Muhammad Ali, Everlast has recently branched out into MMA (Mixed Martial Arts), bringing more than a century of combat-equipment expertise to this new arena. 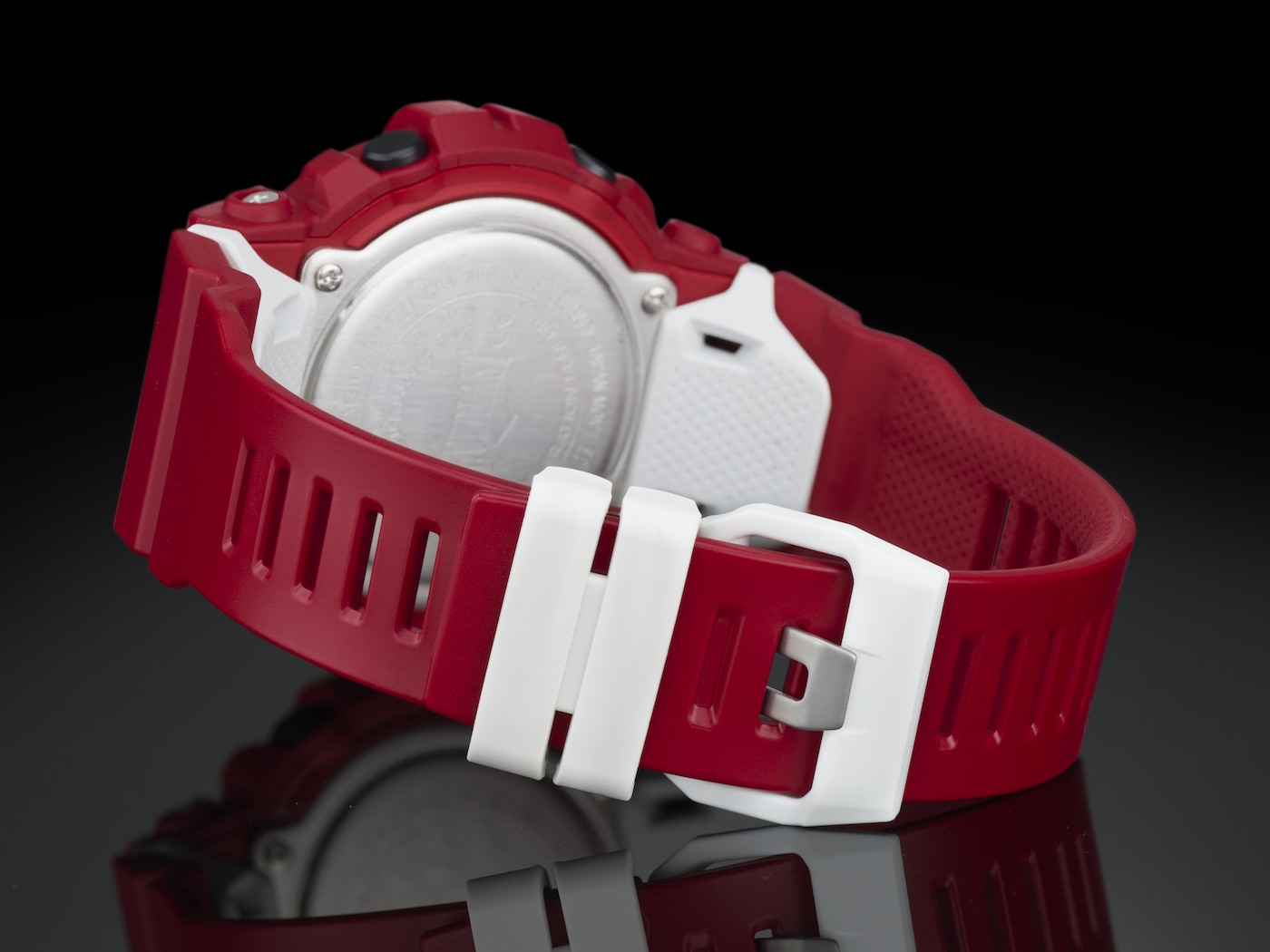 Collaborations of this nature can sometimes feel disingenuous and forced, but the relevant functionality of the GBA800EL-4A (catchy name) makes this partnership work. It does so on both an aesthetic and practical level. This new addition to the mammoth Casio G-Shock line is styled in the classic bright red of traditional boxing gloves, with the white and black accents for which the Everlast brand is known. The brand’s logo is engraved on the stainless steel case and is printed on both the dial (between 9 and 12 o’clock) and the shoulder of the strap at 6 o’clock. 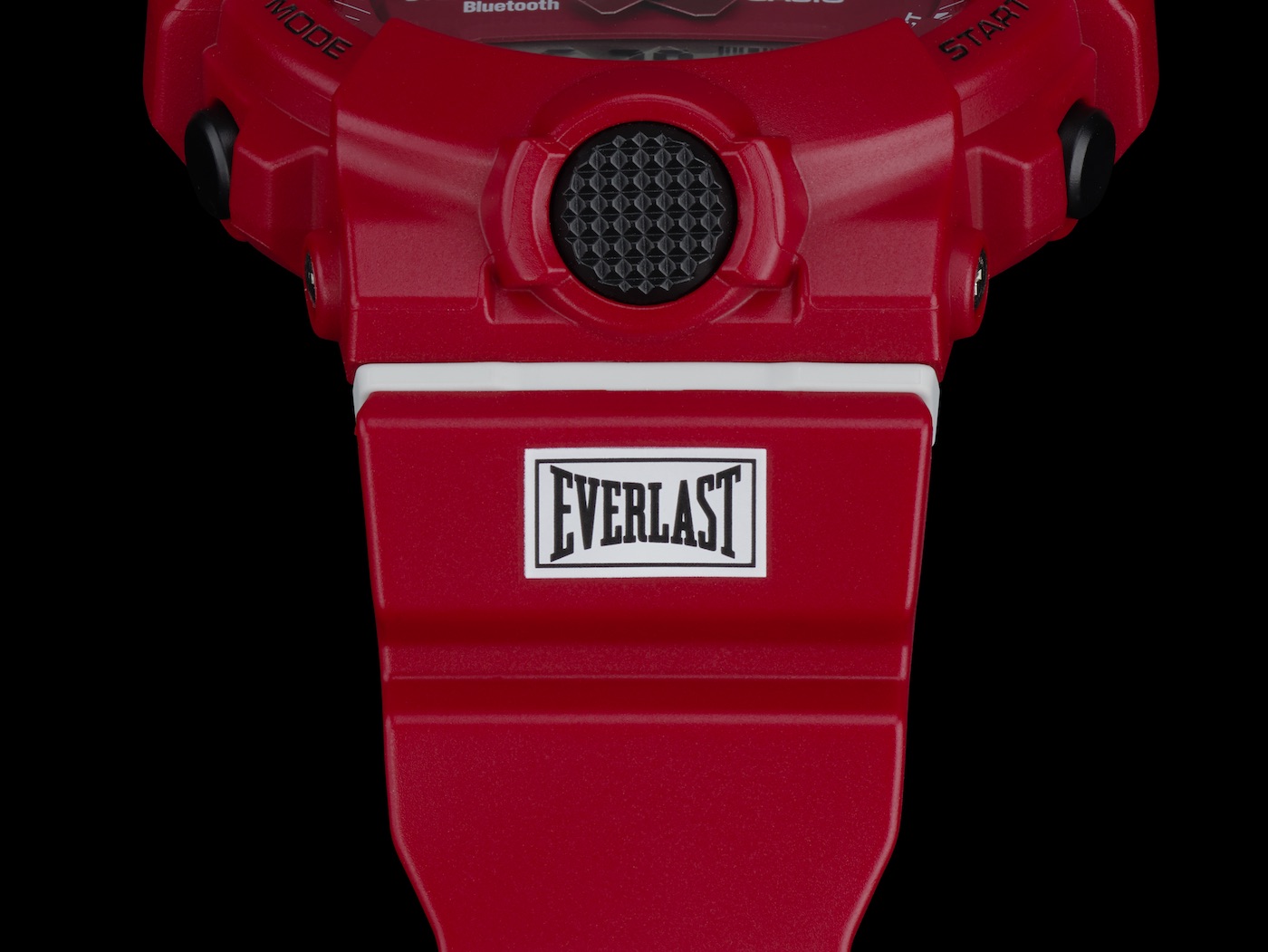 The co-branding continues when the watch’s light is activated, illuminating Everlast’s motto in cursive script in the background of the digital display that spans the bottom third of the watch, providing a clear and simple readout of the data tracked by this multi-functional timepiece. The motto reads, ‘The Choice of Champions” and is uncommonly apt, given how useful a training tool this watch could actually turn out to be. 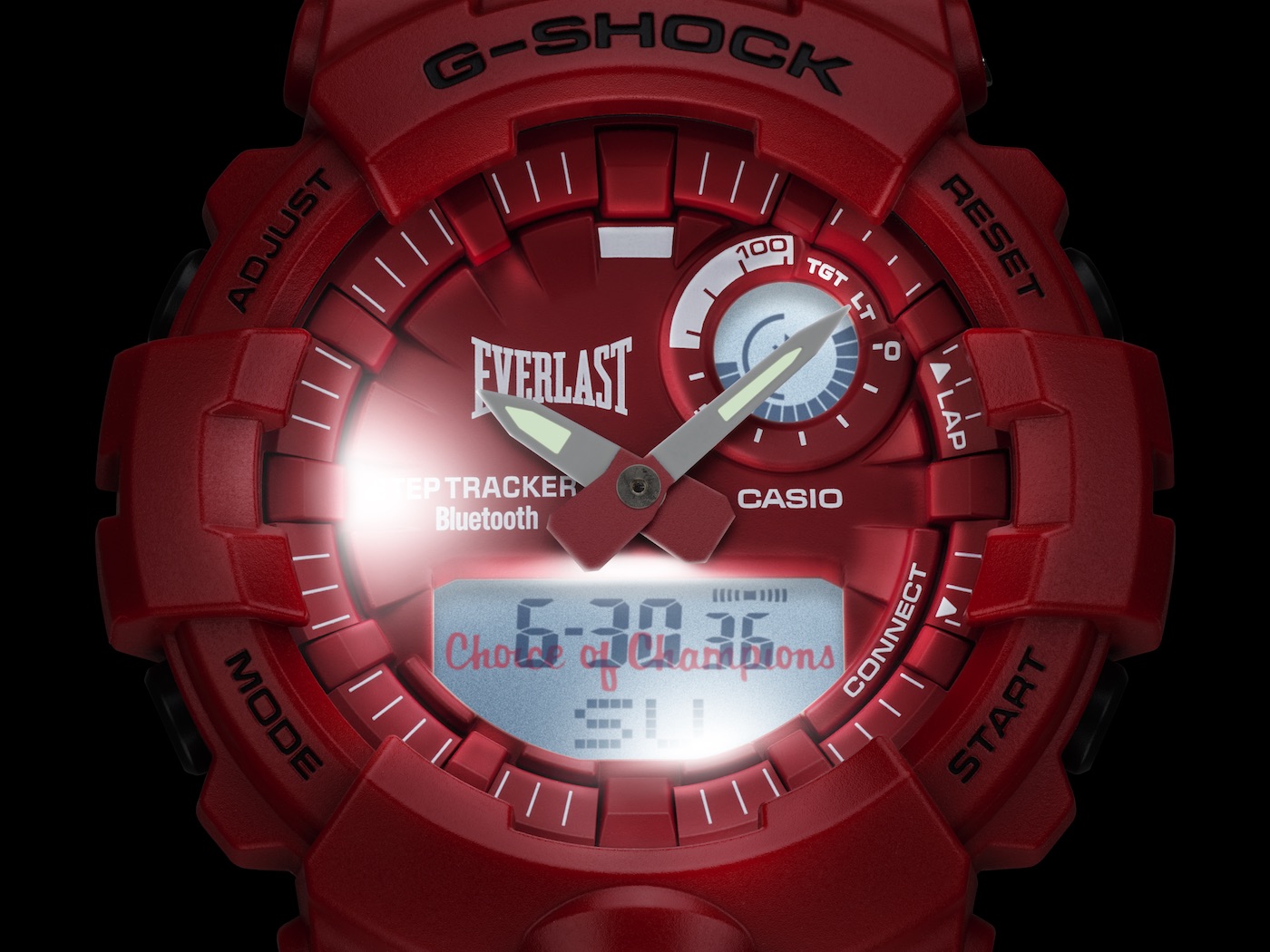 The GBA800EL-4A is fitted with a three-axis acceleration sensor to keep track of step count, as well as walking/running pace. The current step count and hourly step graph can be displayed digitally and read against a status indicator between 1 and 2 o’clock that keeps track of your daily performance, versus your pre-set daily targets.

Setting up targets can be done via the cellphone app, which communicates to the watch via Bluetooth. This also enables more detailed analysis of daily efforts, with graphs of steps taken and calories burned. This data is also broken down by five metabolic equivalent (MET) levels for each day, week, and month. An additional feature (that I find very useful) is that the exact location of the steps taken can be displayed on a map, which makes tracking your movements (and recording preferred running routes) a doddle. 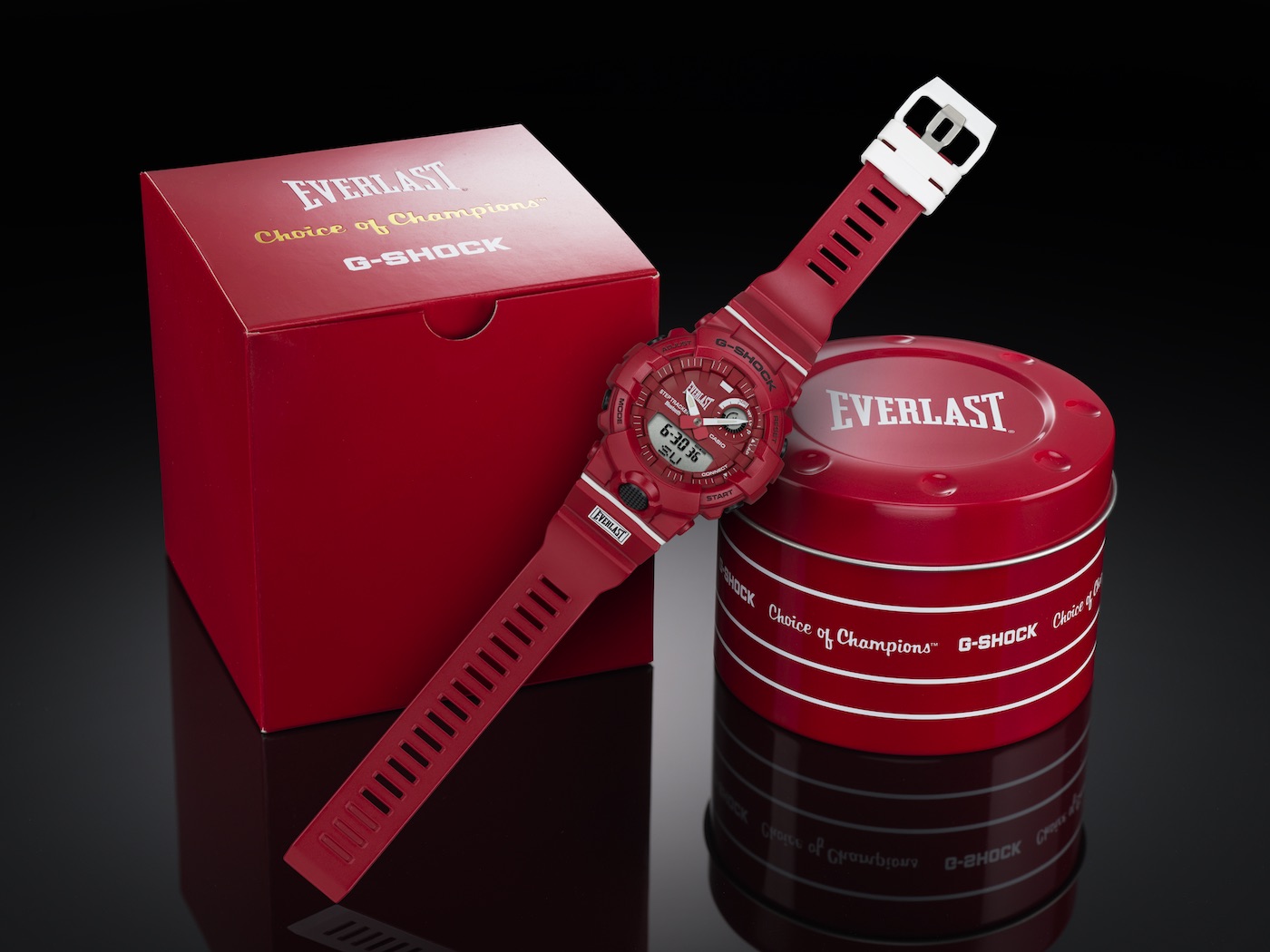 As well as this new Bluetooth functionality, the Casio G-Shock GBA800EL-4A boasts a lot of the common G-Shock tech that we’ve come to expect from this popular Japanese brand. The GBA800EL-4A features 200 meters of water resistance, dual-time functionality, LED light, stopwatch and countdown timer,  five daily alarms, and the option to choose between 12- or 24-hour time formats. 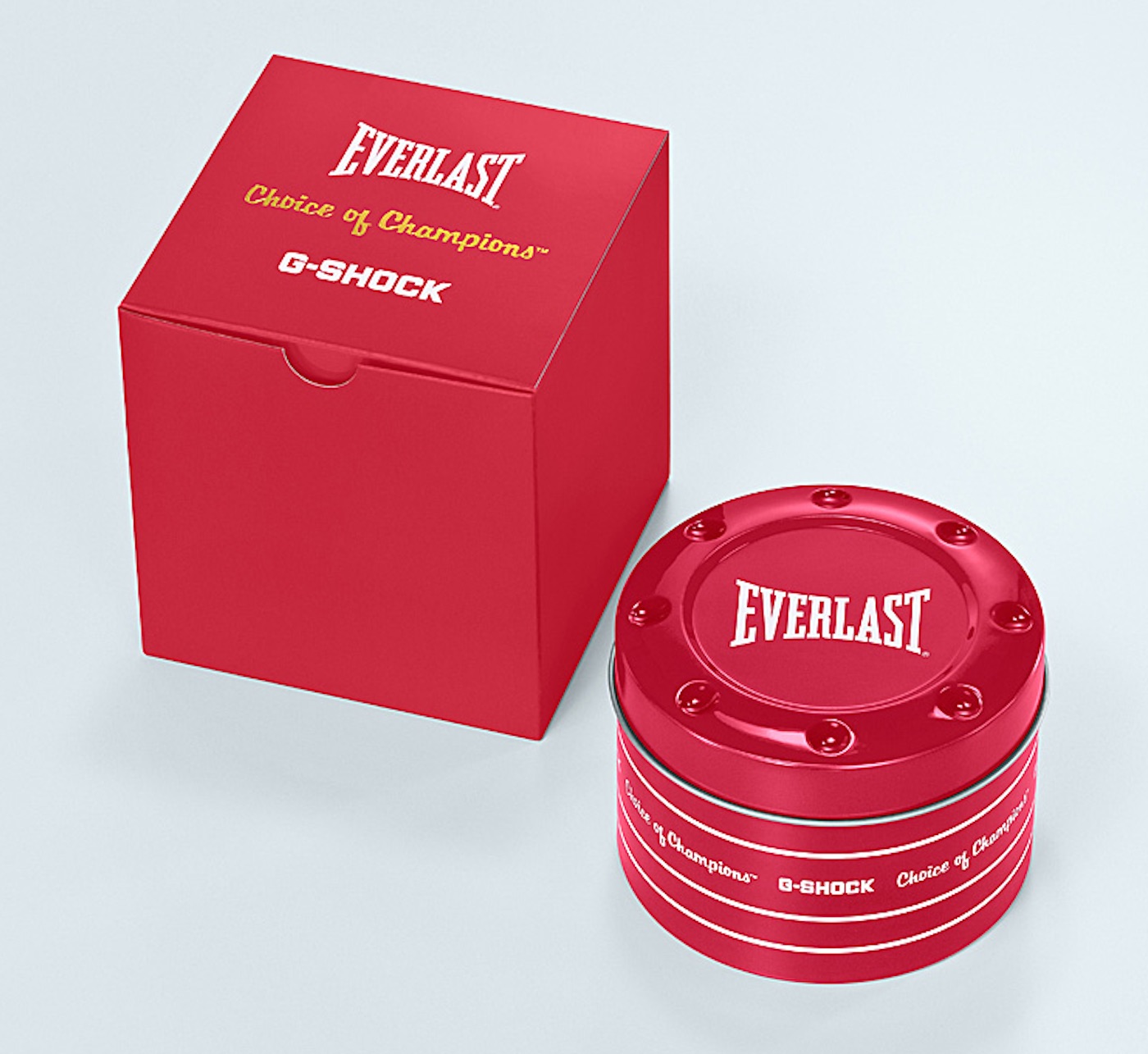 With a retail price of just $160, the Casio G-Shock GBA800EL-4A is a tempting prospect for fans of general fitness, a bold aesthetic, or collectors of boxing memorabilia. While the watch may not have any boxing-specific functions (such a punch-power rater or a speedball strike counter) it does seem very well-equipped to handle the more basic requirements of an athletic training regimen. And while I’ve never been struck by Bluetooth functionality, here it feels quite at home. The watch comes in a co-branded tin and will be available at Macy’s, the G-Shock Soho store (in NYC), and on the official website. While the watch is referred to as a limited edition, the exact number of pieces created has not yet been communicated. The price, and the cross-appeal of what is a very fun-looking watch, really does make this a contender, in more ways than one. Learn more at casio.com.