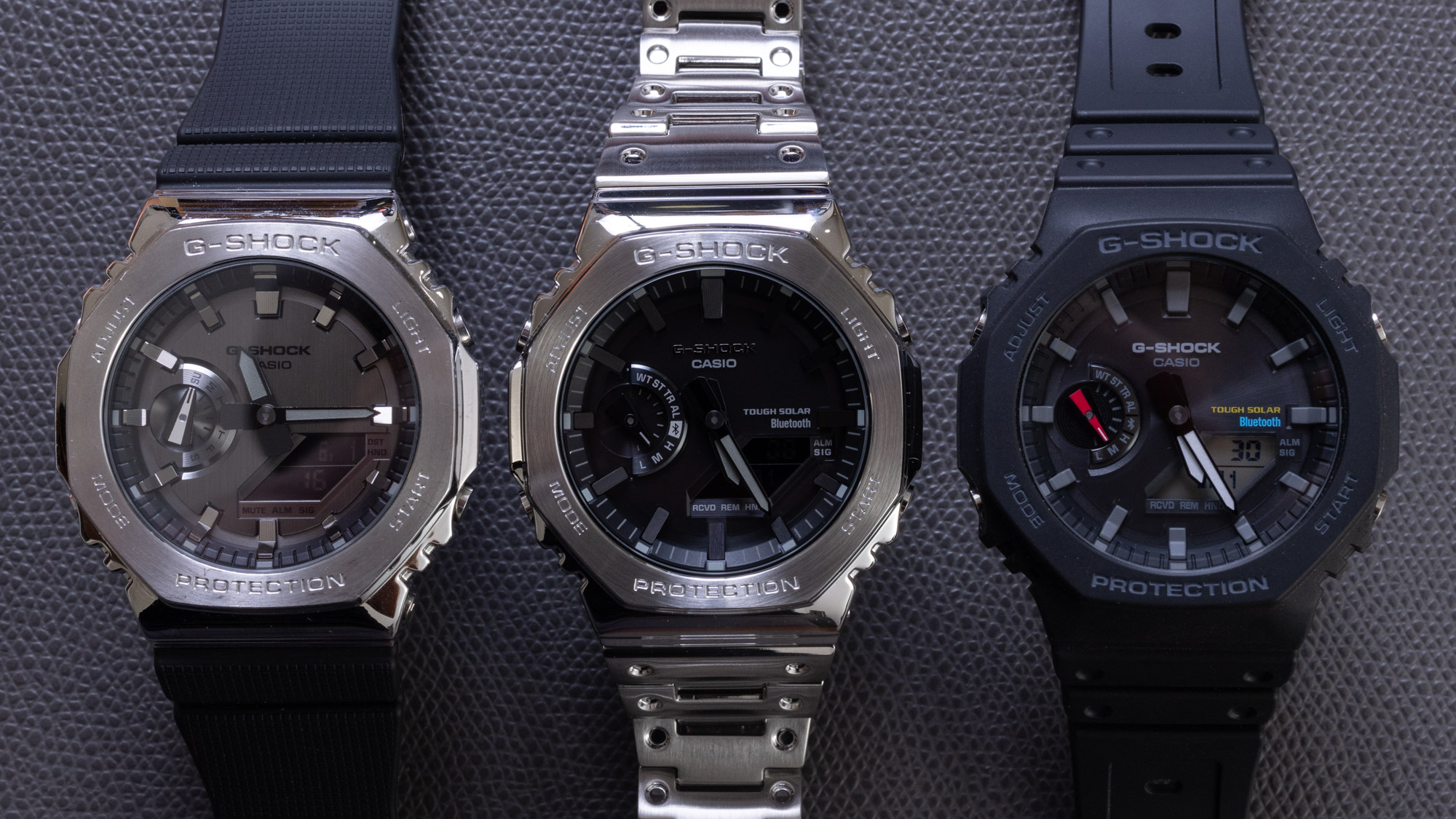 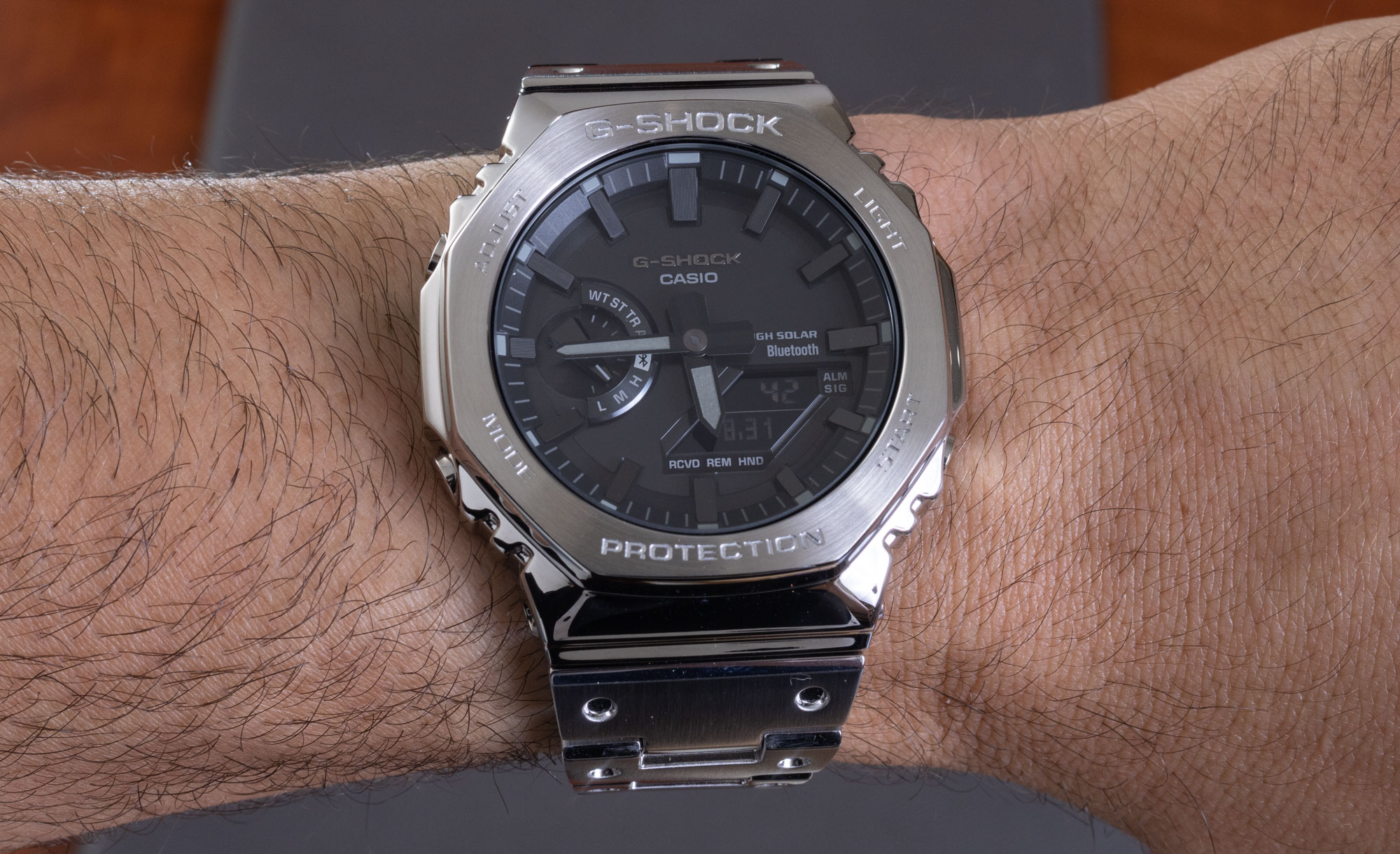 Now that the “full metal” on bracelet version of the Casio G-Shock GA2100 is here, I think it is safe to say that Casio is going to sell an awful lot of these watches. The resulting collection is known as the Casio G-Shock GMB2100, and the particular polished steel version I am reviewing is the reference GMB2100D-1A. The GMB2100 range finally gives the octagonal-cased GA2100 case design concept the more elevated metal look that many consumers have been asking for. Casio didn’t need to do much to please people, and the GMB2100 simply builds on existing models combining materials and features in a watch that offers an excellent sweet spot for a large number of wearers. In essence, the GMB2100 family is really now a sister collection to the Casio GMWB5000 family (one of the aBlogtoWatch reviews here), even if it builds off of the G-Shock GA2100, GM2100, and GAB2100 model families.

So, what does all this mean? It means that fans of Casio’s trendy-looking GA2100 case with its octagonal bezel and relatively clean, analog/digital display can now enjoy the convenience of Bluetooth connectivity, as well as the wearing elegance and fashionability of a full-metal watch case and matching steel bracelet. Just as Casio did with the GMWB5000 collection, I fully anticipate a slew of GMB2100 models, including those in different colors and in different materials later, such as titanium. The debut collection of GMB2100 models includes three watches in steel, with various coatings. This GMB2100D-1A is the “hero model” being in all polished steel tone with a somewhat muted gray dial… and it is really great to wear on the wrist. 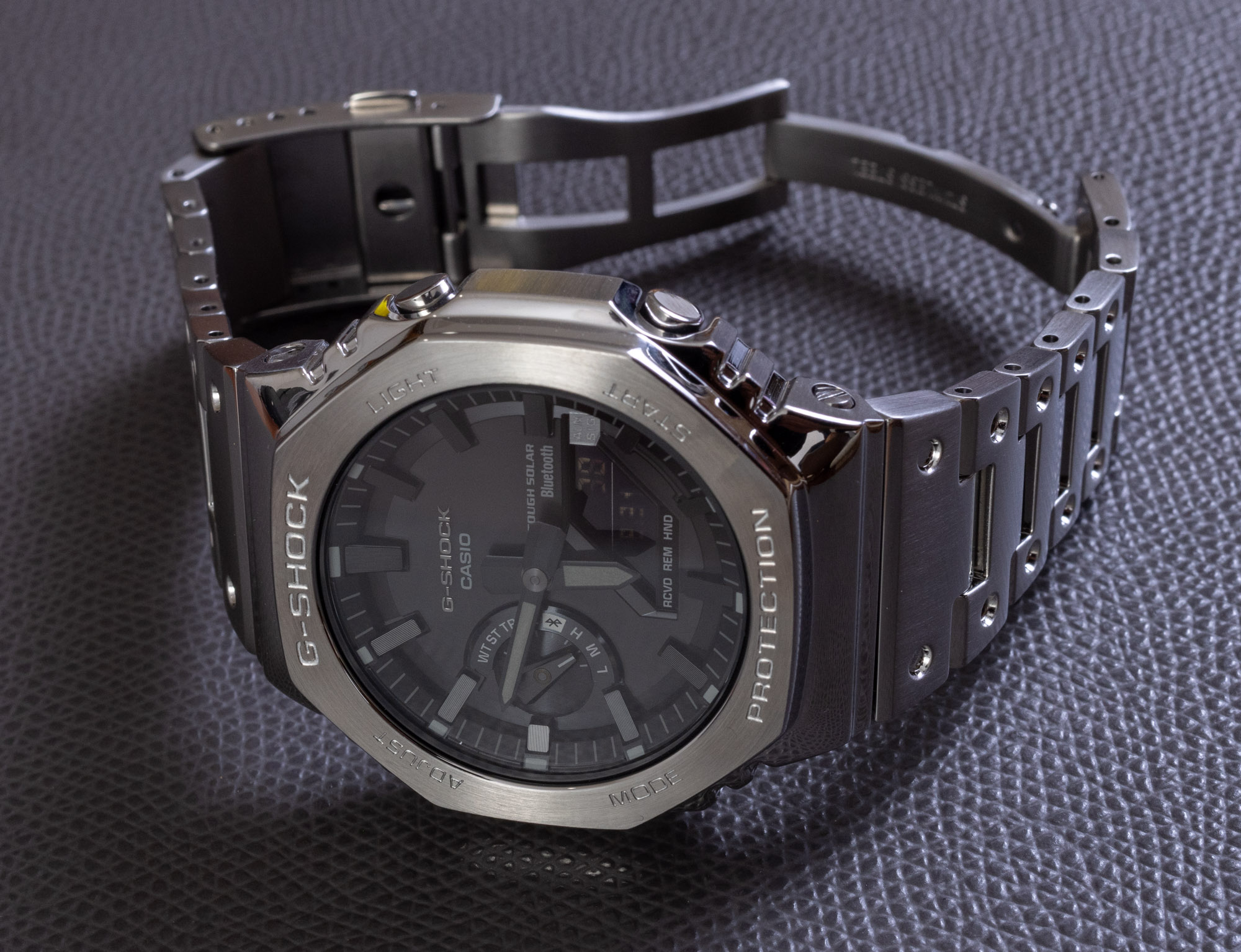 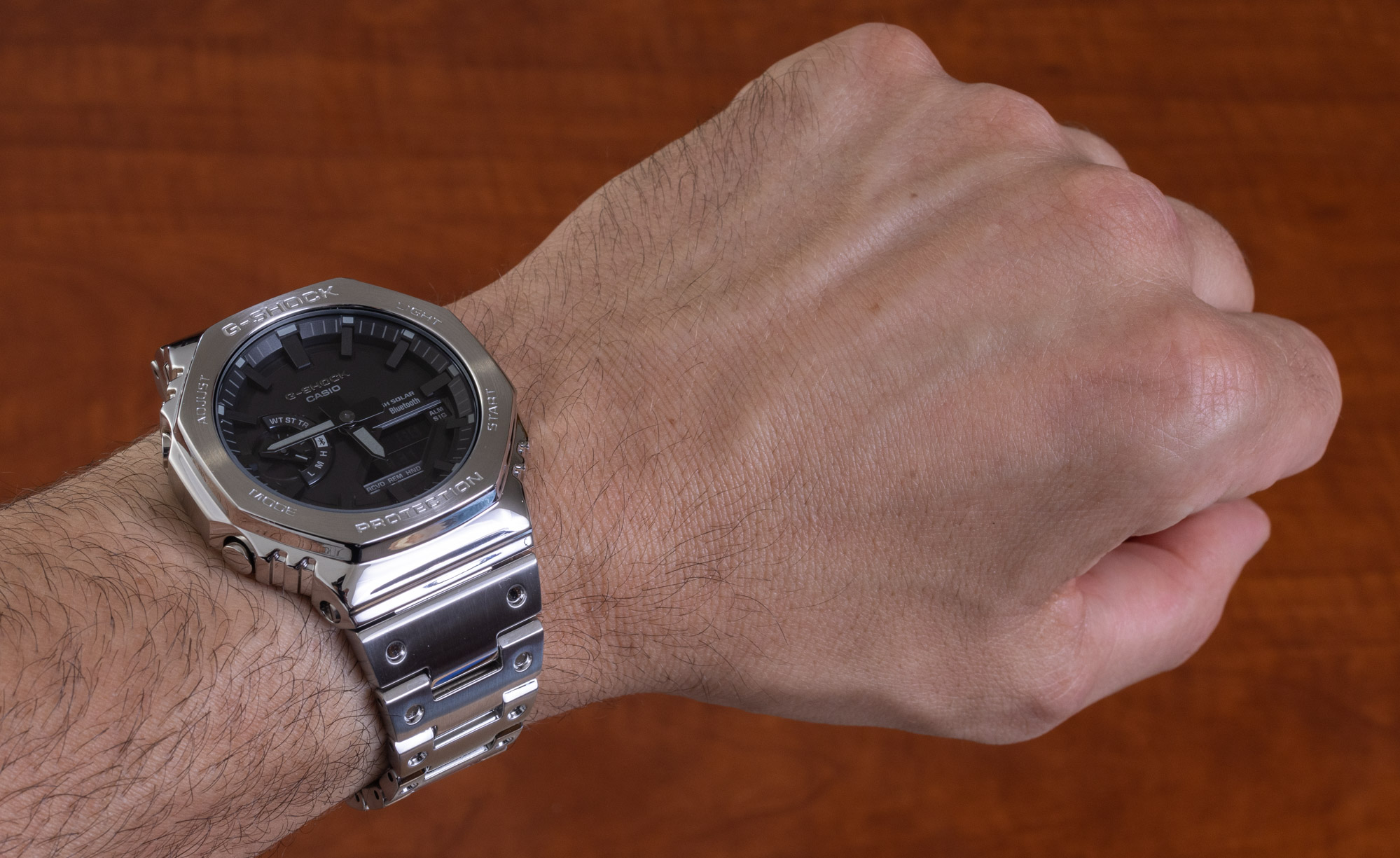 The result is a highly functional tool with a powerful wrist presence that makes this a status piece more than a sports watch. Indeed, the GMB2100 reminds wearers of its durability with the large “Shock Resistant” label on the rear of the case, but the appeal is all in the nice overall shape that you get from the combined polished case and bracelet. Of course, Casio was inspired by the popularity of the Gerald Genta-designed Audemars Piguet Royal Oak for the overall shape and profile of the GMB2100. Companies have been doing that since the 1980s, and most watches that emulate the Royal Oak over the years have not been as successful. Why is this Casio such a hit? Two reasons. First, in 2022 terms, the Royal Oak’s case profile and shape are very popular in pop culture, meaning that the masses are more interested in this look. Second, the underlying value, functionality, and convenience that the GMB2100 watch provides are very high.

The result is a product people want to use with a look that they like to wear. Casio prices are always extremely fair, and consumers know there are probably no more trustworthy watches like this at lower prices. Thus, the reliability and fashionability that Casio alone is able to offer allow the Japanese company great market power in creating demand for a hip watch like this. 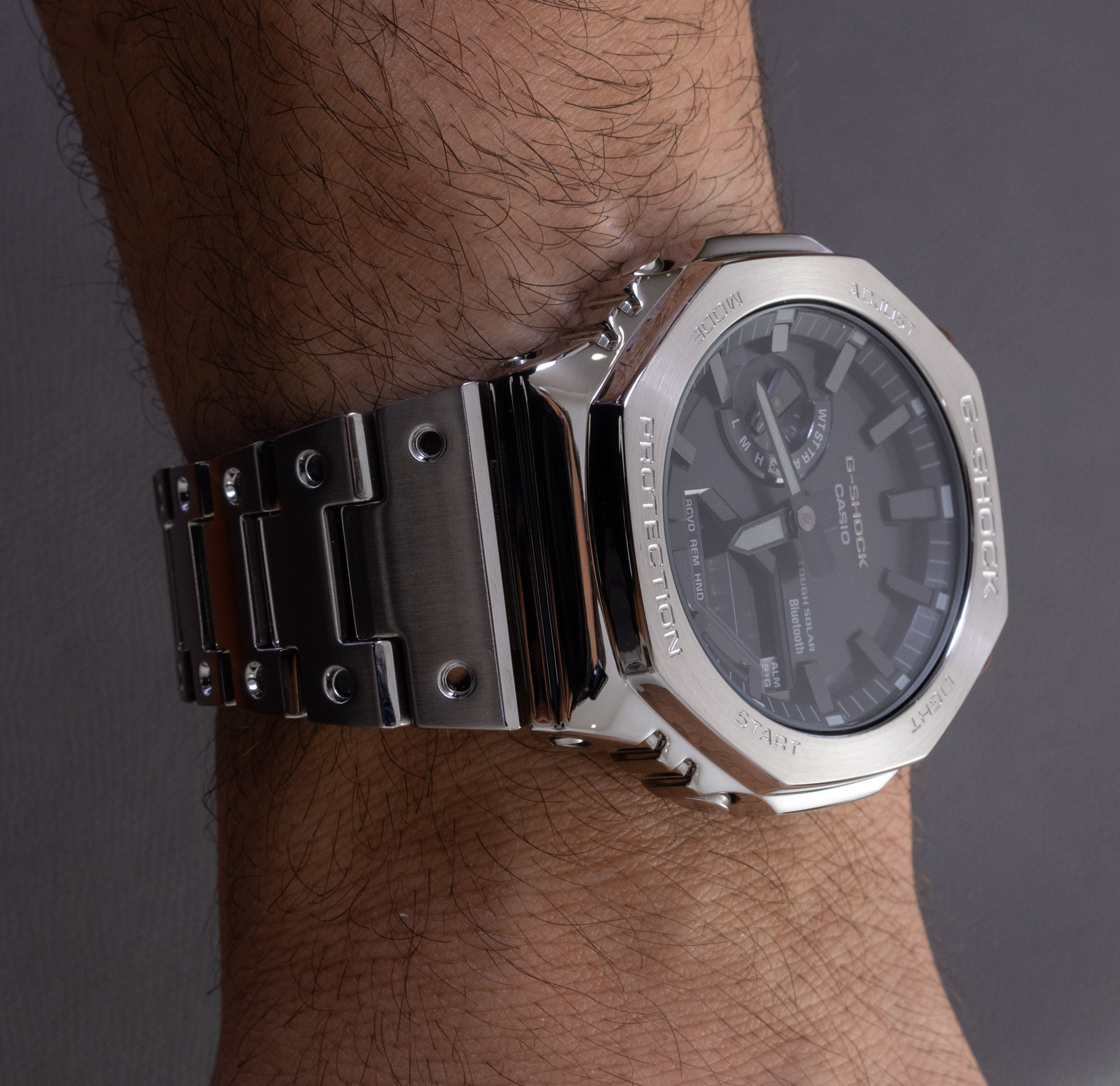 The success of the G-Shock GA2100 collection prompted Casio to build out the range very quickly. Adding metal to cases was the first step, and the second step was to increase the functionality of the Casio-made module by offering the upgraded G-Shock GAB2100 (aBlogtoWatch review here) that includes both Bluetooth connectivity as well as a light-charging “Tough Solar” system. It wasn’t more than about two months after the GAB2100 debuted, in June 2022, that Casio then decided to debut the GBM2100 family that I review today. As I said above, this combination of the more functional module and the full-metal construction makes this G-Shock model family particularly appealing to fans.

The price of the Casio GMB2100 is actually the exact same as the GMWB5000 when you compare 1:1 versions of the watches (same finishing and materials). The former is the analog/digital watch you see today and the former is an all-digital piece. Which you like more is really a matter of taste, but only the GMB2100 has this particular case shape with the octagonal bezel. The bracelets on both watches are the same. They use heavy, solid steel links and easy-to-adjust bracelets that use small spring bars to connect the links, as opposed to more traditional pins. You still need a tool to adjust the bracelet size, but it is quite easy. On top of that, I want to remind people that, unlike more flimsy metal bracelets of the past, these bracelet links and deployants are sturdy solid metal and not thinner stamped elements. 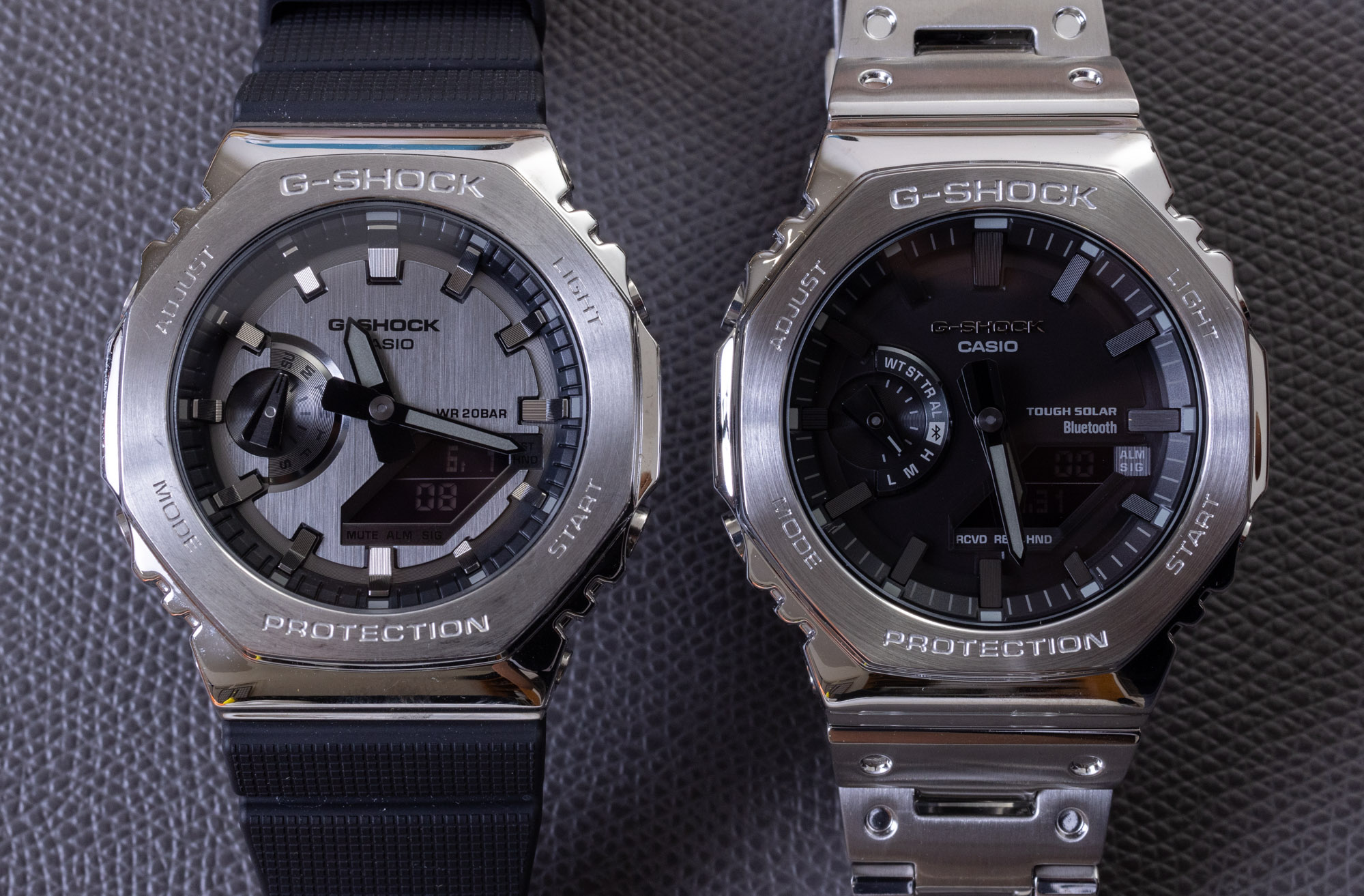 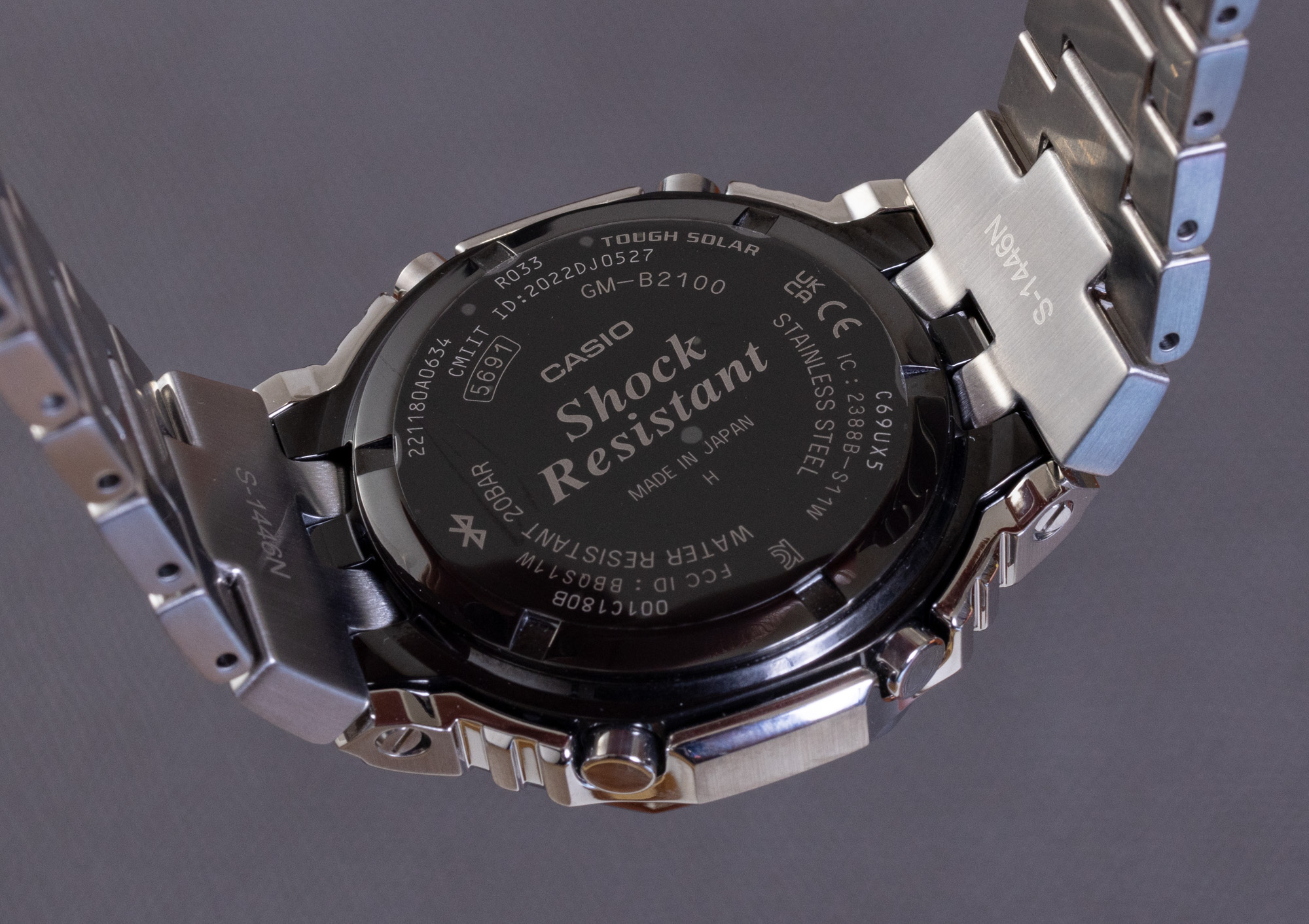 The case and bracelet design are in metal but designed to not only look like the resin parts, but also to be just as durable as Casio’s resin-based G-Shock watch cases and bracelets. The case is also water resistant to 200 meters and is meant to be banged around (though I don’t recommend as much of that with a metal case if you want to keep it looking pretty). Size-wise, the case is 43.2mm-wide, 13mm-thick, and has a 49.3mm lug-to-lug distance. It wears a bit on the larger side due to the higher angle that the lugs point down in, and the length of the end-links.

Over the dial is a mineral crystal, which is probably the one area in which I’d have immediately liked to see an upgrade. Casio does this to keep the cost of the watch down (mineral crystals cost less than the more expensive and more-scratch resistant sapphire crystals), which, at over $500, is still considered a luxury to most buyers. Casio will likely have some fancier versions of the GMB2100 with a sapphire crystal in the future, but I don’t expect those models to cost under $800. Otherwise, there is nearly nothing to complain about in this watch, from an enthusiast’s perspective. 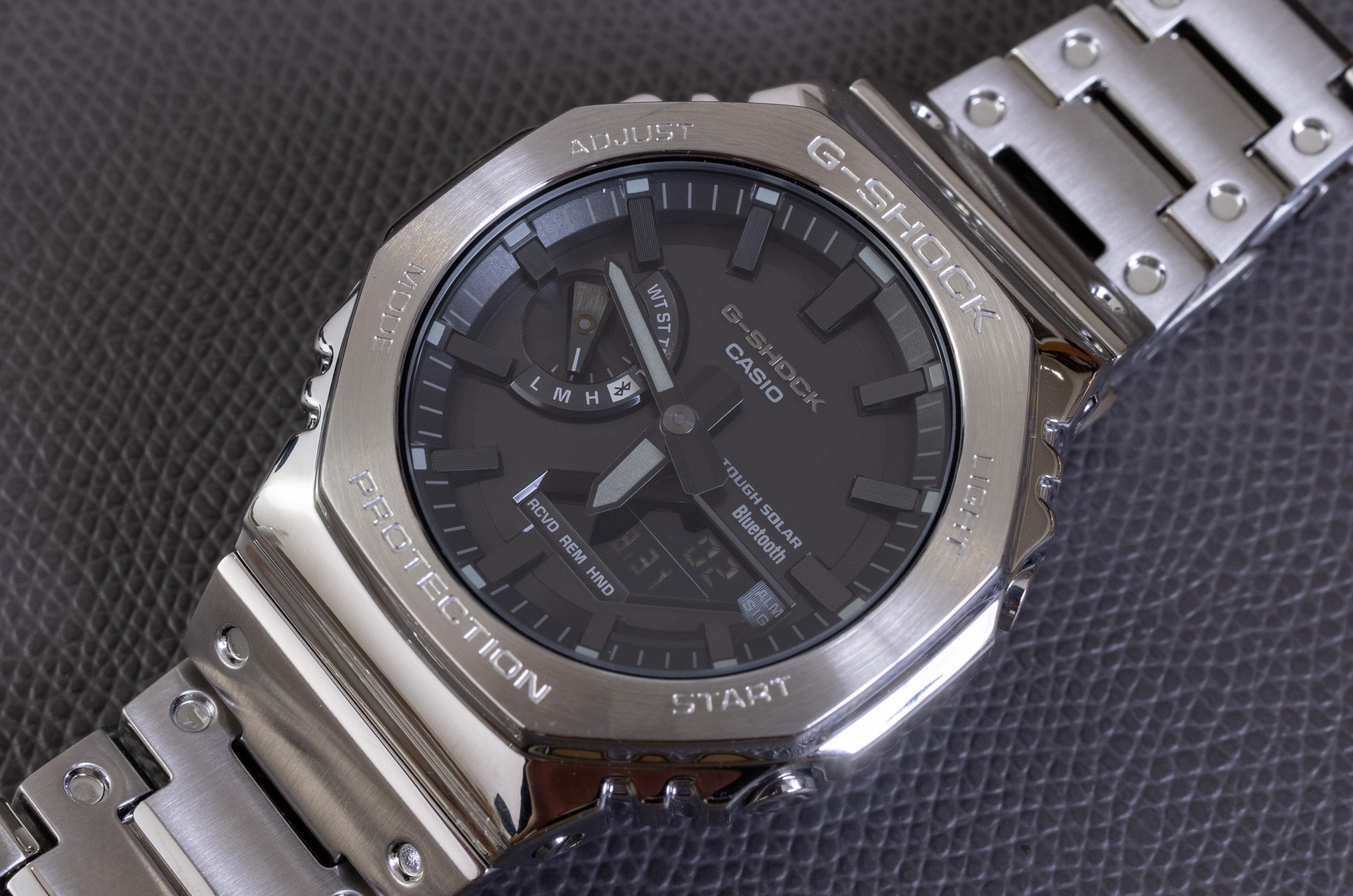 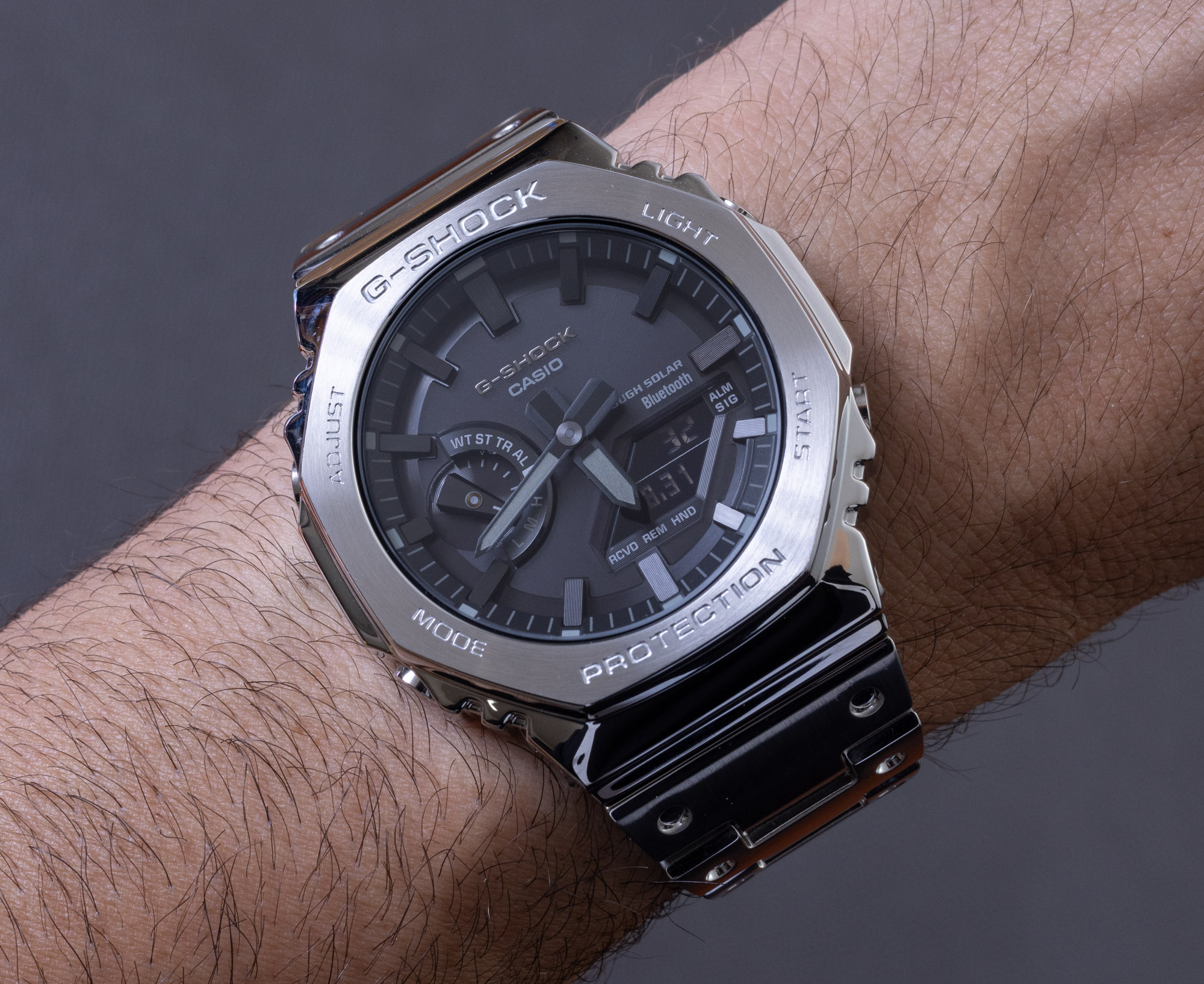 I recommend sizing the GMB2100 watch snugly for comfort because, at 167 grams in weight, you do feel this on your wrist. I don’t mind that, but going from a super lightweight G-Shock resin watch to a metal one does require a mental adjustment. The heft feels good, however, in the sort of old-school way a heavy Swiss Made once did. What isn’t old-school is the modern Bluetooth-enabled movement that connects to a Casio smartphone app. This isn’t a smartwatch, per see, but the Bluetooth connectivity allows the user to do a few things, the most important of which is enabling the Casio app to automatically adjust the time on your watch so that it is accurate even when you are traveling. The second would be the app’s ability to allow you to easily adjust things like the alarms or worldtime function on the watch without having to fiddle with small pushers and a tiny screen. With the solar charging and the always-accurate feature, the GMB2100 is yet another “set it and forget it” Casio product that users like because it is one less thing to worry about in its assortment of regular-carry gadgets.

Casio made a design decision to give this version of the GMB2100 a gray-on-gray face. It is chic and fashionable, for sure, but it means that the luminant on the face isn’t the strongest. The good news is that there is an LED backlight feature to illuminate the dial on command. More so, the various shades and textures on the dial allow the monochromatic look to be relatively legible most of the time. Casio will, no doubt, render the GMB2100 dial in a variety of colors and styles throughout the lifecycle of this particular watch collection. 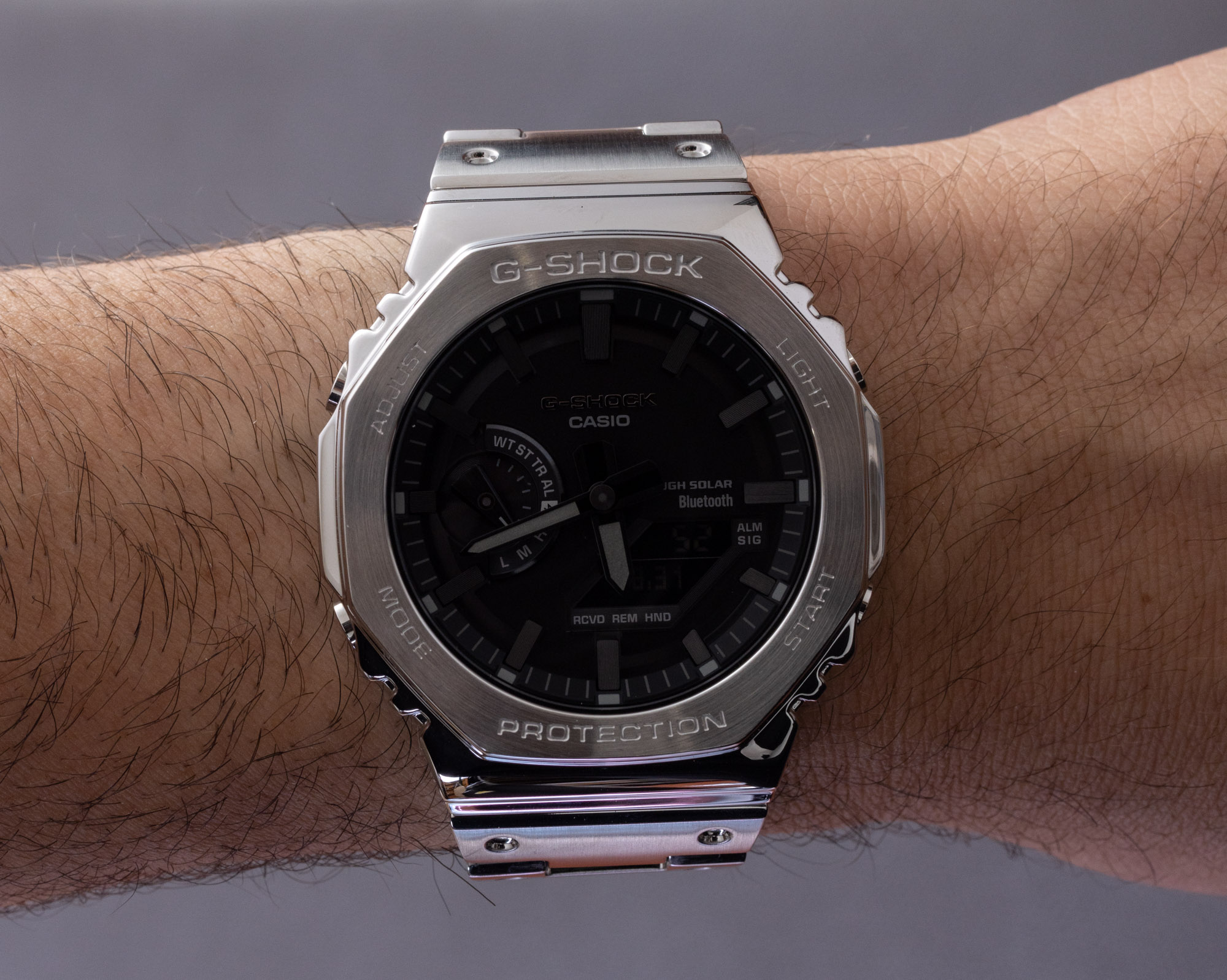 Consumers keen on the G-Shock GA2100 family, and who want the look of a more “lifestyle” versus sports watch, will probably adore the Casio G-Shock GMB2100 series. On the wrist and visually, these are very satisfying timepieces that hit a sweet spot for many consumers. Let me know what you think in the comments below. Price for the Casio G-Shock GMB2100D-1A watch is $550 USD. Learn more at the Casio website here.

Necessary Information:
>Brand: Casio
>Model: G-Shock GMB2100D-1A
>Price: $550 USD
>Size: 43.2mm-wide, 13mm-thick, 49.3mm lug-to-lug distance
>When reviewer would personally wear it: As a hip daily wear in most any circumstance.
>Friend we’d recommend it to first: Fans of octagonal bezels and metal cases who want a trendy look with Casio reliability and functionality.
>Best characteristic of watch: Really good blend of features makes for a highly desirable watch that has the sportiness of a G-Shock with the elegance of a dressier watch. Well-priced and well-constructed.
>Worst characteristic of watch: Mineral instead of sapphire crystal. Gray-on-gray dial isn’t for everyone. Casio might be releasing too many similar products in short succession, which can make it hard for some consumers to decide which piece is best for them.