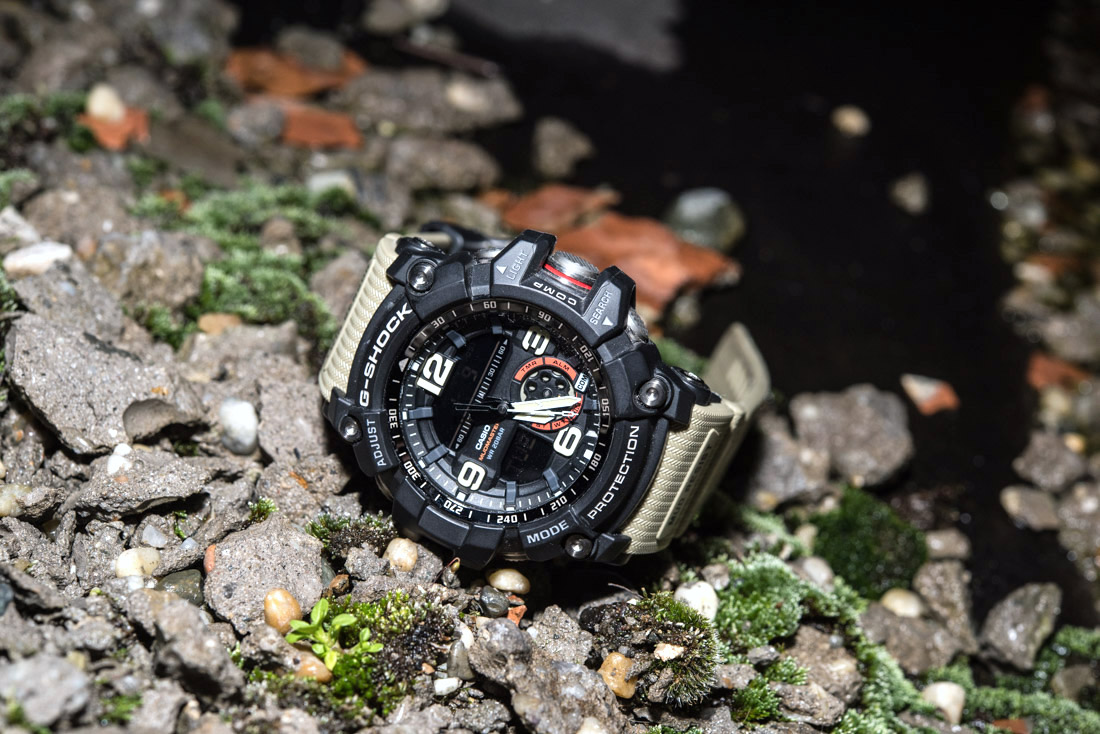 Beyond the 5000 and 5600 lines, of all relatively affordable G-Shocks it is the Mudmaster collection that speaks to me the most. This led me to review the Casio G-Shock GG-1000-1A5 Mudmaster, curious to find out if it could justify its considerable price premium over this reviewed 5600 that I love and wear often.

Our Zach has reviewed the bigger brother of this piece, the GWG-1000-1A3, which, for a bit over twice the price of this $320 GG-1000 range, offered a slew of functionality in a bigger size that I figured I could live without – including an altimeter, barometer, “Smart Access,” and the considerably larger and heavier case.

Zach has given a solid run-down on where the Mudmaster fits into the somewhat confusing hierarchy of Master Professional and Twin-Sensor ranges of purpose-built G-Shock watches, so I’ll just briefly focus on what makes the Mudmaster stand out in general and quickly get to the nitty-gritty of the Twin Sensor GG-1000-1A5.

About The Mudmaster Collection

The professionals who rock a Mudmaster are some of the best brand ambassadors I can think of – certainly many will find them more relatable and convincing than millionaire golfers and actresses. I remember how I was surprised to learn that G-Shocks named after a given field of use were specifically designed for relevant scenarios – admittedly, perhaps my cynical side got the best of me before. 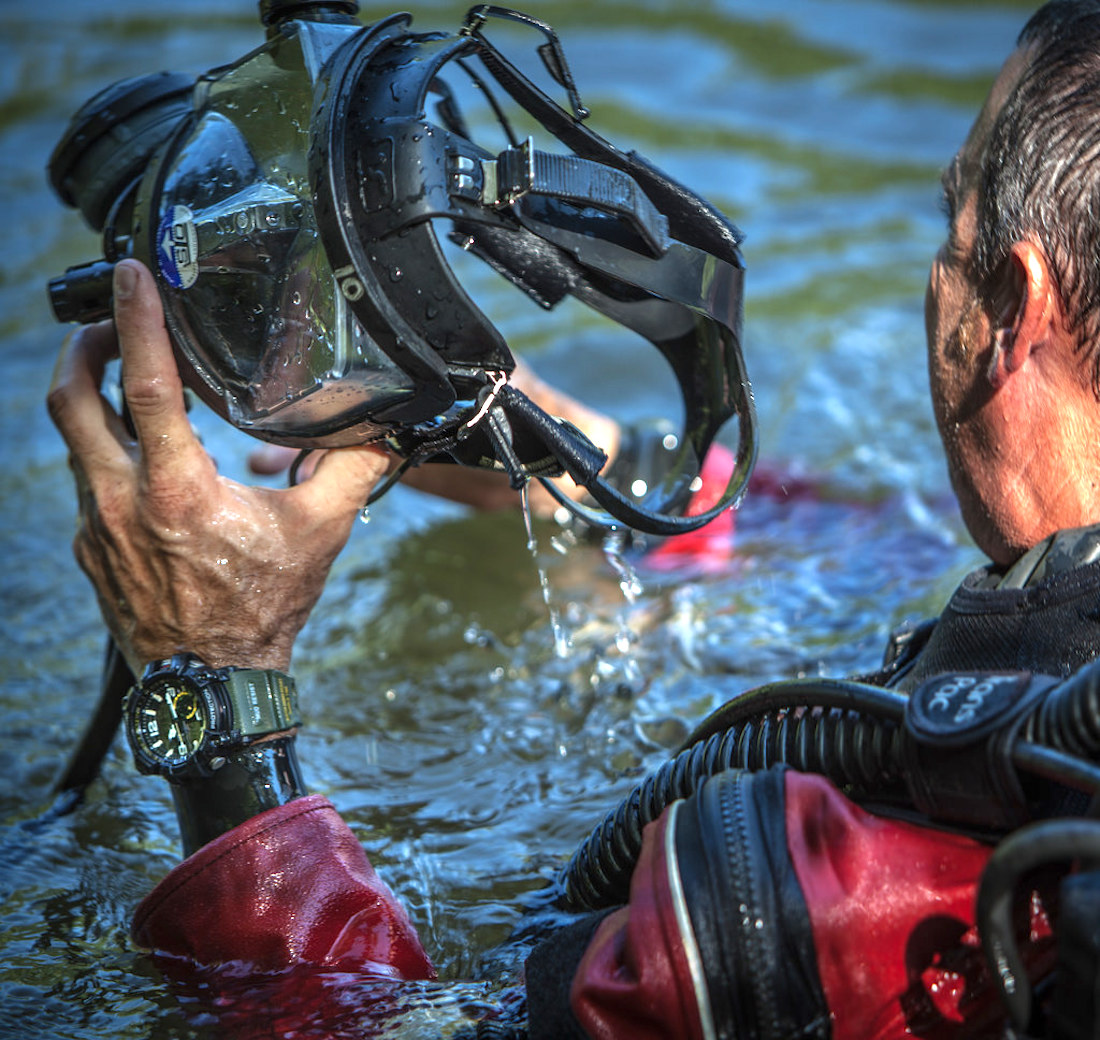 The video above was done with a USAR (Urban Search and Rescue) team and it gives one a good idea about the circumstances the Mudmaster was designed to work well under. There’s plenty of tough impacts as these guys climb through ruined buildings, tunnels, and river banks – further worsened by powerful vibrations through extended and repeated periods when using power tools, as well as, you guessed it, a generous amount of abrasive and intruding mud and high velocity water. 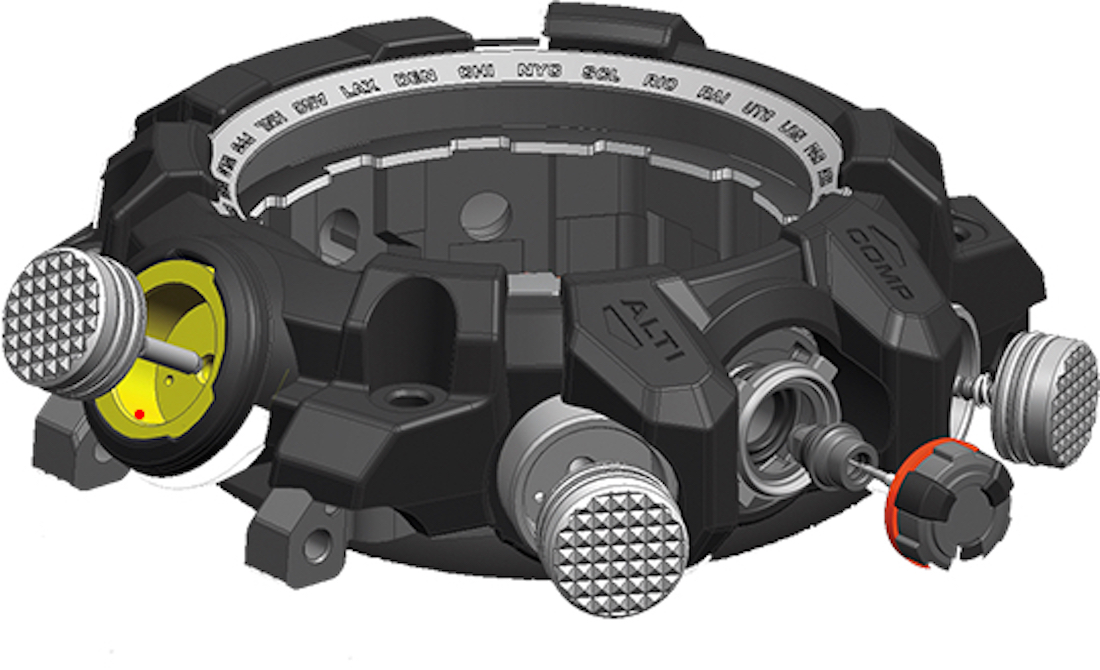 Here’s how the higher-end GWG-1000’s case is constructed. The GG-1000 in some critical ways is similar.

To be fair, a very well-built, ordinary quartz watch and especially a lower-end G-Shock could withstand a lot of these elements. But, it would be only a matter of time before the cumulative effects of such a wide range of hardships would destroy either the seals, the movement, or any of the functionalities.

As much as I respect the GWG – the most expensive variant that Zach reviewed – I find it a bit too large and too complicated to believe it to be actually useful in the field. It’s more of a high-tech gadget version of the useful GG-1000-1A5 that we are looking at today, than a real alternative. This neatly leads us to… 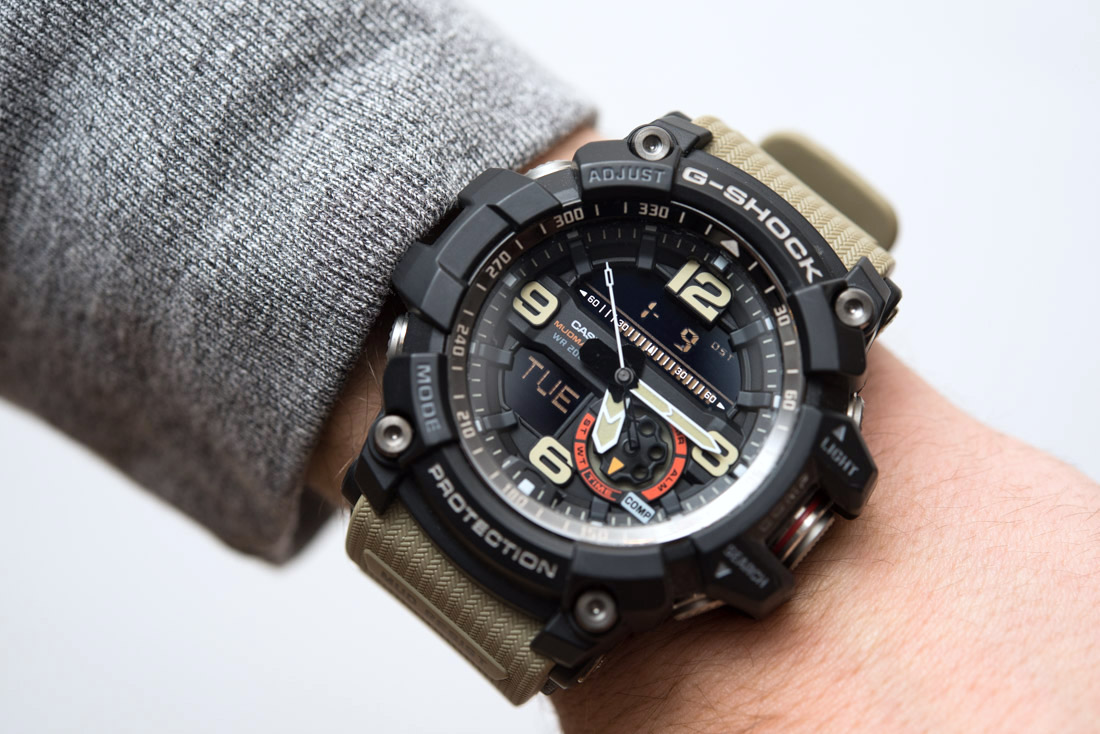 You don’t have to be looking at – or even wearing – the Casio G-Shock GG-1000-1A5 Mudmaster to get a solid impression of its truly purpose-built design. Beyond its rather powerful proportions, I presume it is the five buttons that will stand out upon first interaction with the watch: the wide, easy to find and press-checkered surface pushers feel confidence-inspiring in that you immediately are confident that they won’t break if you use them under water, when they are muddy, or if they endure a few hard knocks. 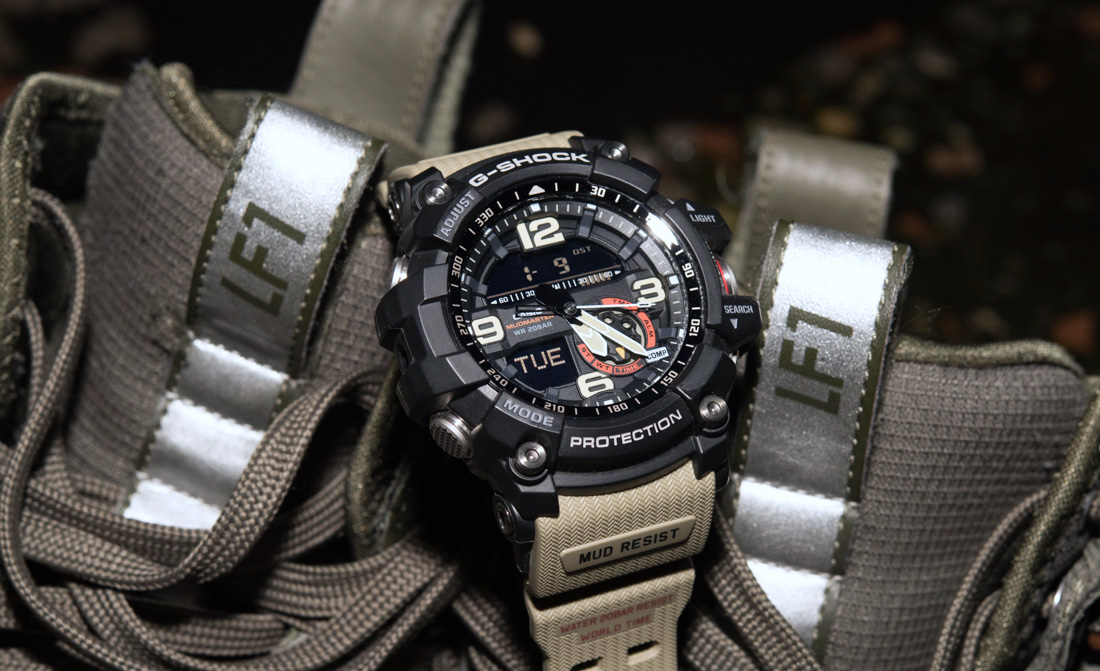 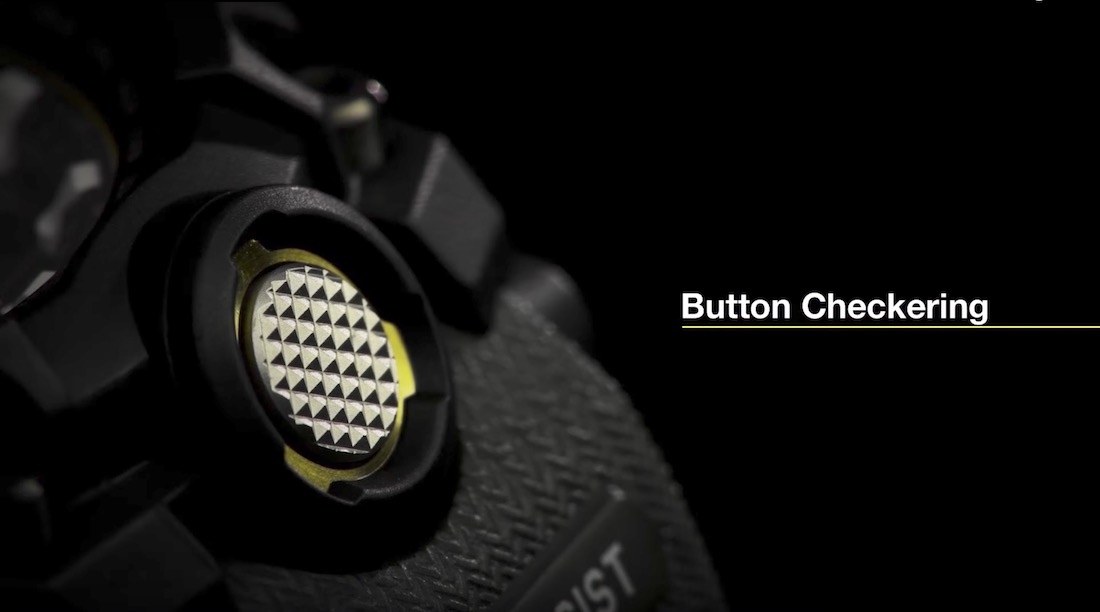 The bulky bezel has a surprisingly soft, rubbery feel to it – it’s a tough old sod of a material, so don’t get fooled into thinking it will peel or dent easily. Strange as it may sound, to my eyes the exterior has a somewhat organic look to it, for its colors, touch, and looks. It’s like an unusually tough bug that lives in the undergrowth and does unthinkably nasty stuff to its peers or survives massive rocks falling on it. You and I may end up with a different analogy, but what I think we’ll agree on is that this watch has a personality to it. 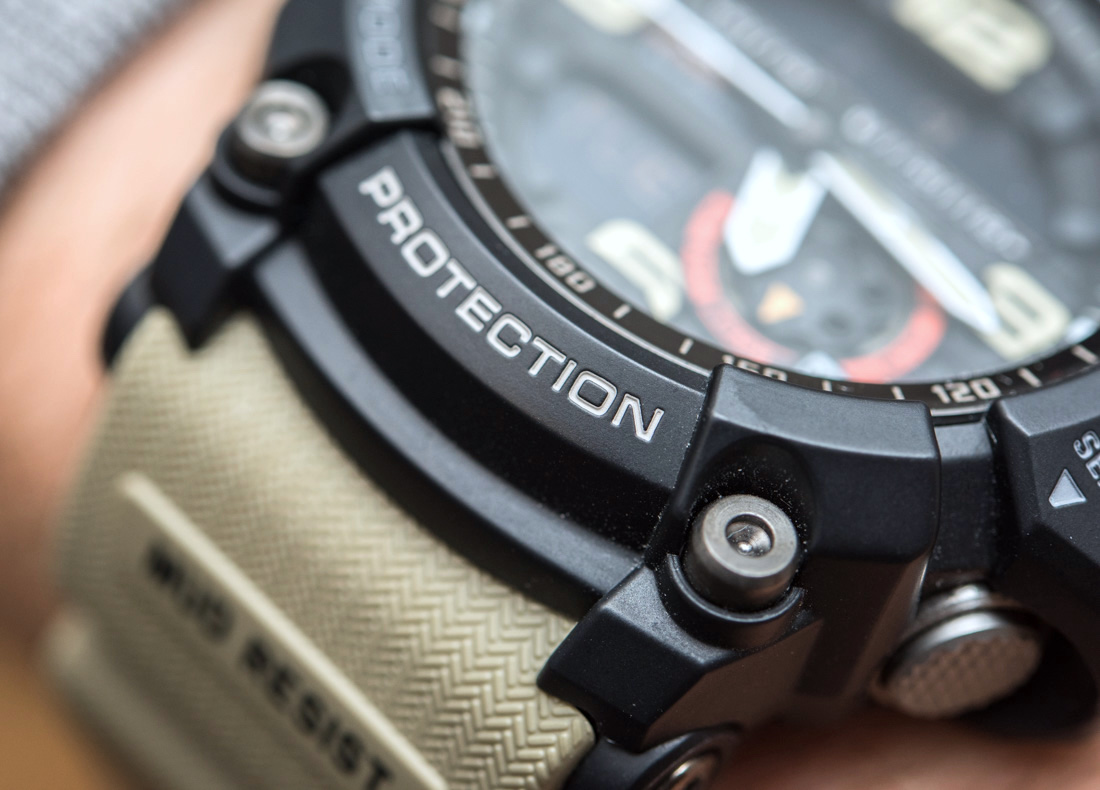 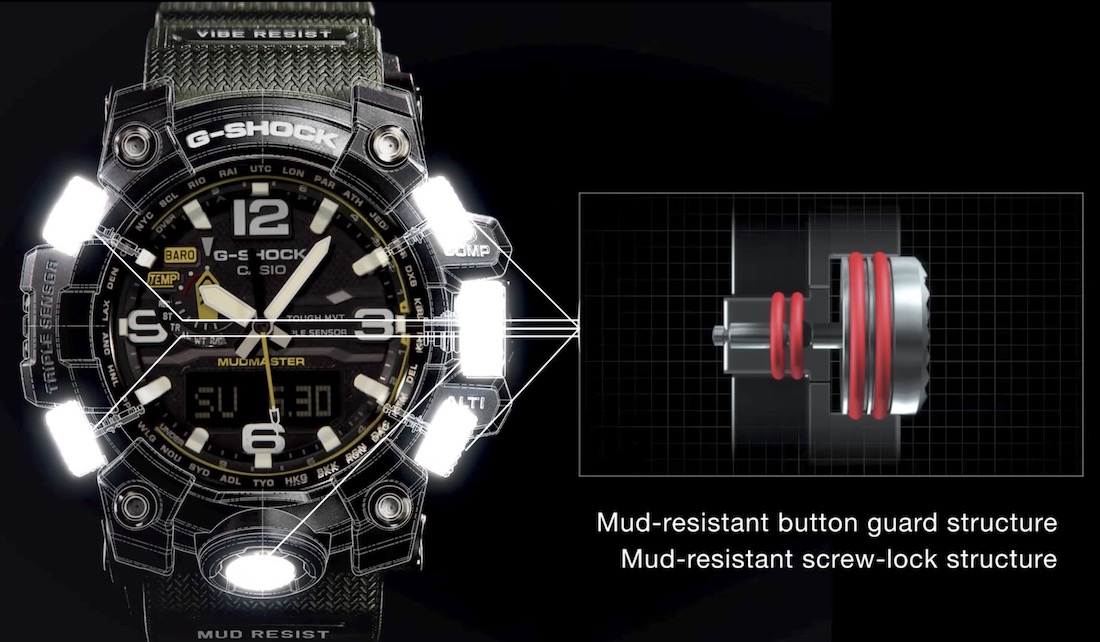 Once again, the more complex GWG-1000 is shown – Casio remains far from amazing when it comes to making high-resolution, relevant images accessible.

The integration of the strap, the tactile feel of the thing, the kind of natural evolution-inspired protective bulges on the bezel and around the “crown,” the almost laughable thickness, the sturdy looks and touch, as well as the relative lightness of the thing do all add up for a long list of likable aesthetic elements.

With all this in mind, looking at the Casio G-Shock GG-1000-1A5 Mudmaster makes me think it will work brilliantly either as an actual tool for those rescue workers and others doing comparably tough physical work out in the wild… Or as a fun-looking, quirky cool watch that is, well, fun to work. I don’t see it however as something that will have your non-watch-savvy, non-rescue worker friends and gals impressed by it in the least. It’s just too big and brash for that – those fun elements will likely be only appreciated by watch and/or gadget enthusiasts. If you want to look cool and stay within Casio territory, I suggest you just get yourself a colorful 5600 series or some other quirky Casio. 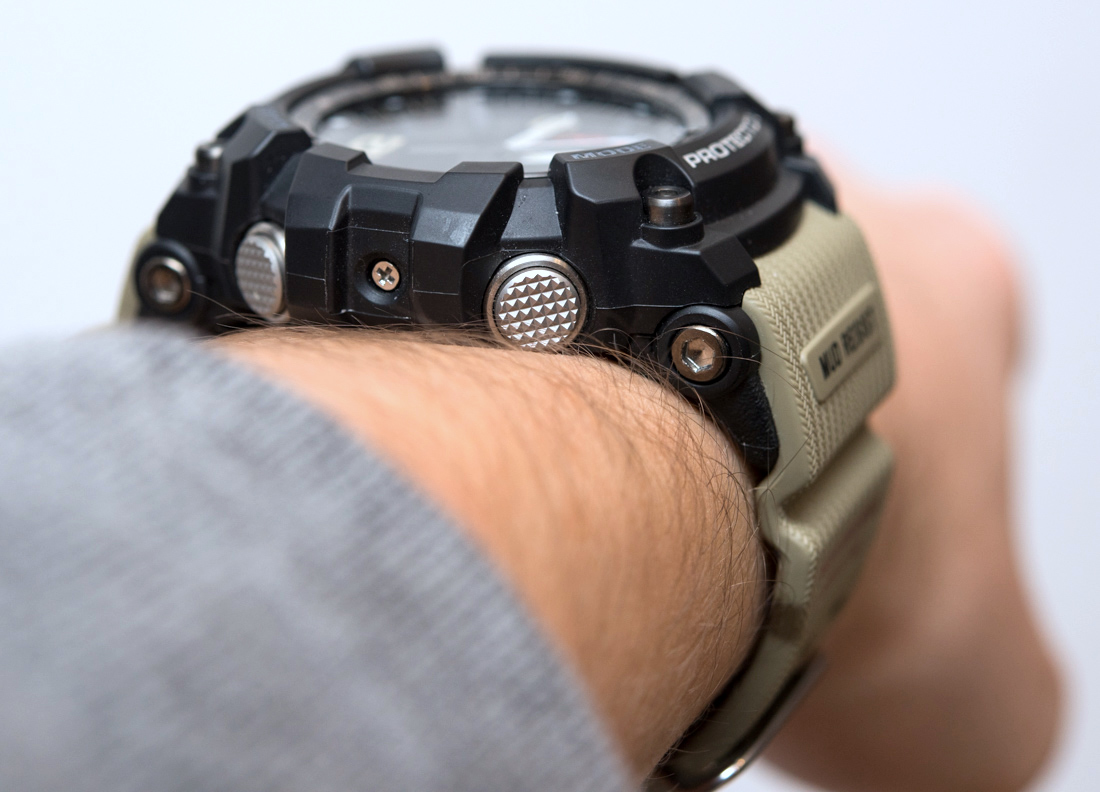 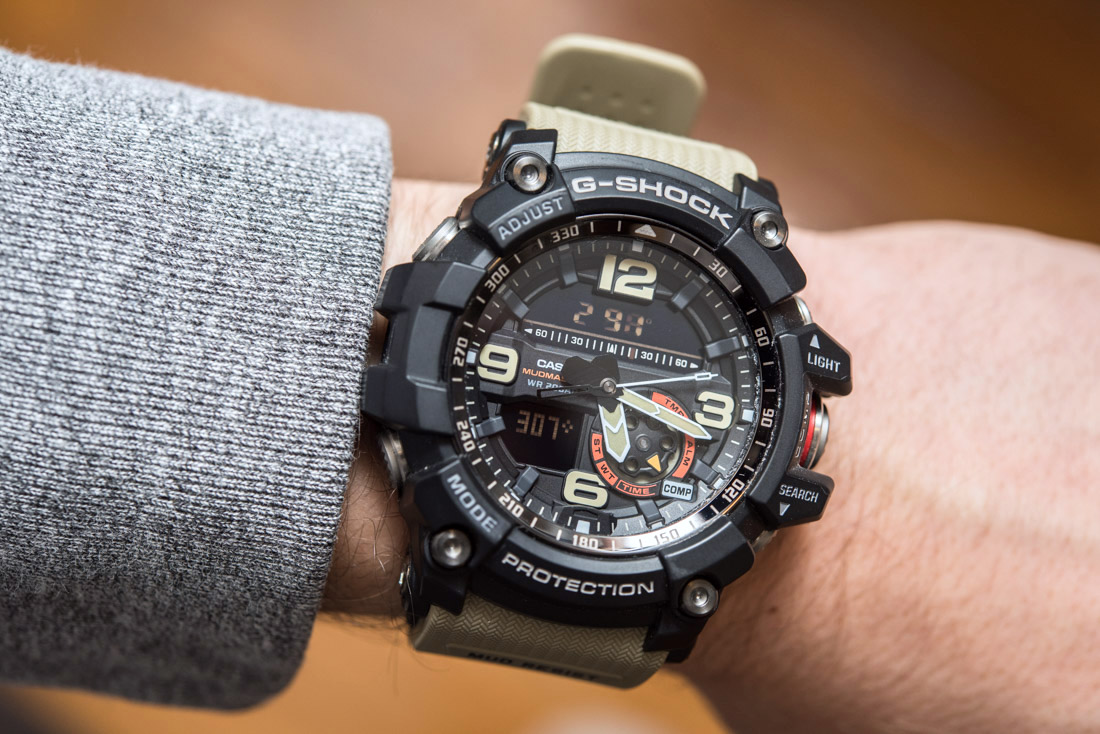 As I said, the thickness is beyond what anyone in their right mind would simply want to call “considerable.” Its 17.3 millimeters is somewhere beyond the implications of that word, a situation worsened by the protrusions on the bezel that have a tendency of getting caught on sleeves and other places. They are rugged alright, but make the GG-1000 even more unlikely to slide under or out from under a sleeve. When looking for stuff in bags or in cubby holes in your car or wherever, the watch will likely get caught on one of those edges. Needless to say, the watch takes it without a morsel of a grumble – it is just annoying. 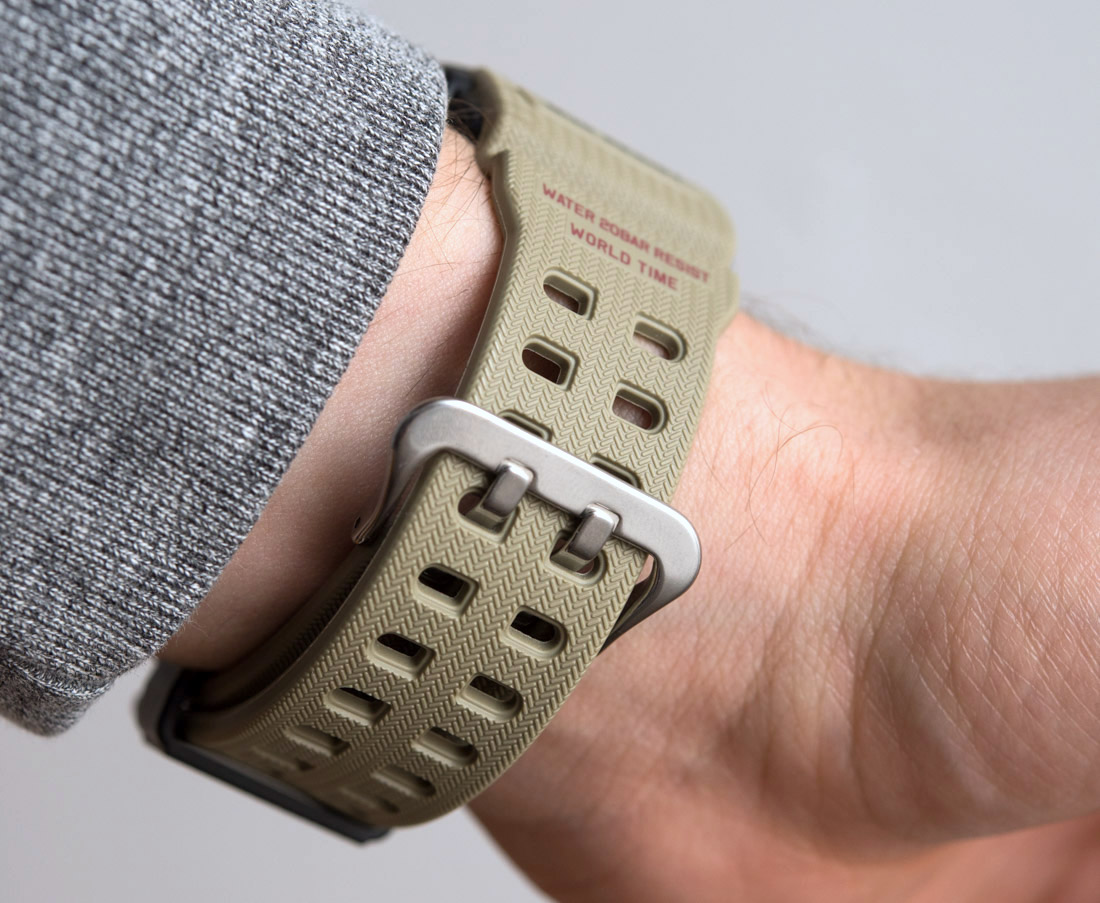 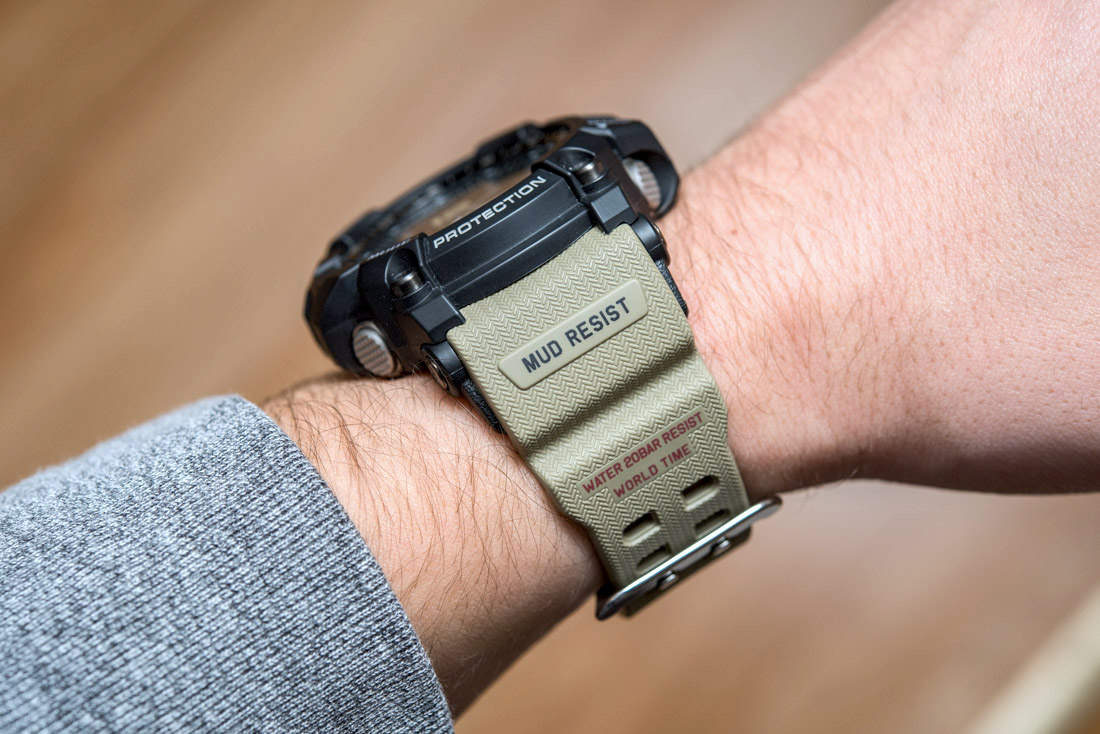 If you know you are – or expect to be – fine with tolerating thick watches, the GG-1000 will reward you with excellent wearability in all other aspects. The integration of the straps combined with intelligently designed lugs and a flat caseback means the watch will sit nice and flat on your wrist and won’t wobble about. The double-pin buckle I presume helps, though, truth be told, I would suggest picking up a second loop for the strap if you have narrow wrists like I do and end up with a long overhang of the other end of the strap. The GG-1000-1A5 measures a whopping 56.2 by 55.3 by 17.3 millimeters, and yet is more comfortable to wear than many of the expensive Swiss watches that come with tragically stiff straps and poorly designed lugs. In other words, when you’re not wearing any sleeves and are not rooting through your bags or other confined spaces, the Casio G-Shock GG-1000-1A5 Mudmaster feels super light and comfortable on the wrist. Few watches sit this settled and flat on the wrist, which is the exact of opposite of what you’d expect from a watch like this.