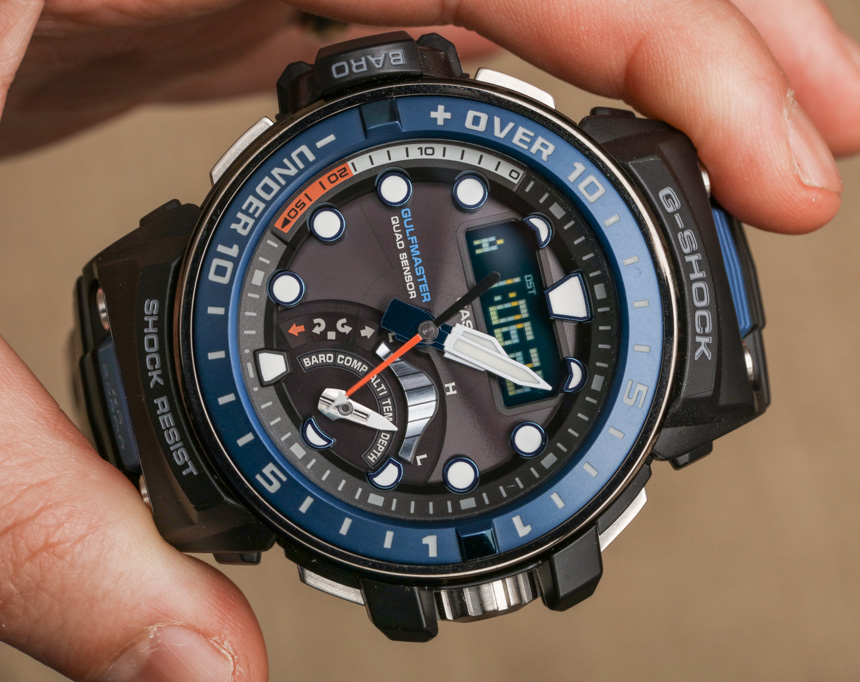 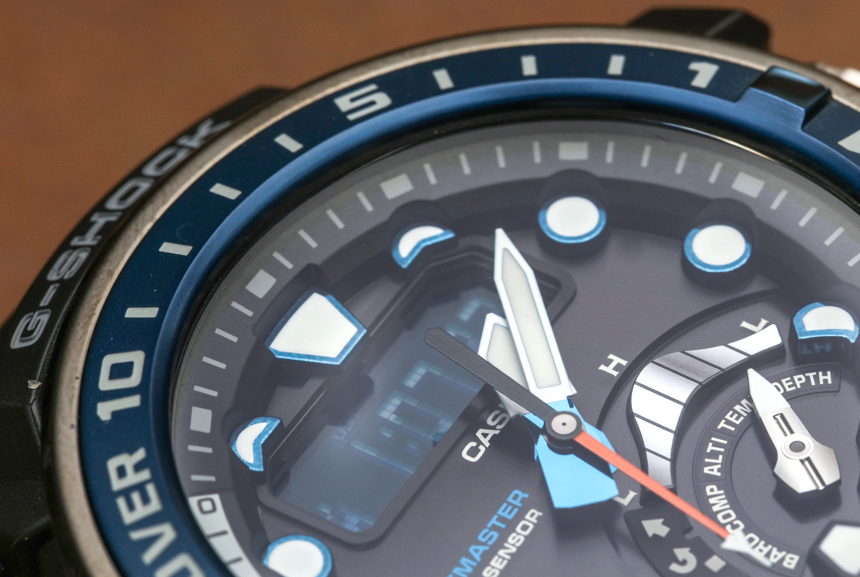 Knowing these “X/Y” coordinates of your location allows the watch to know where you are in the world (as well as the time and date) which allows it to accurately indicate the tide graph data. Such data is indicated visually using the scale and analog hand at 5 o’clock on the dial. When in “Tide” mode, you can also advance the time forward to see what the tide is going to be like in the future – which is really cool as well. Not a new feature for G-Shock models per se, but I still love to use it. 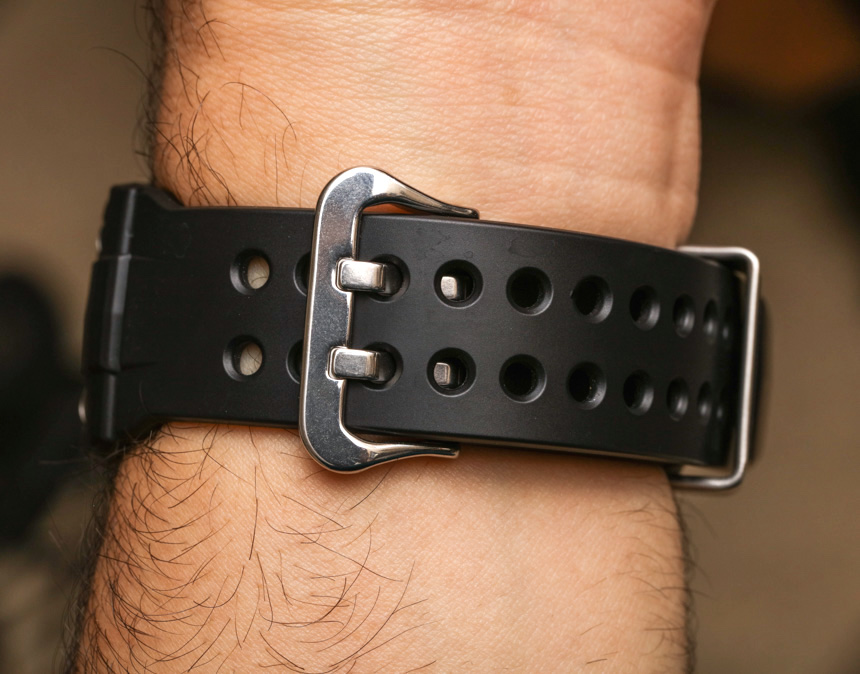 Pretty much all the features you have come to expect in a modern G-Shock watch are here in addition to what I mentioned above. This means sunrise/sunset (which I find very handy and that also uses your location data), 1/100th of a second stopwatch, timer, up to five daily alarms, world time, calendar, and more useful functions that we’ve come to love and rely upon in G-Shock watches. 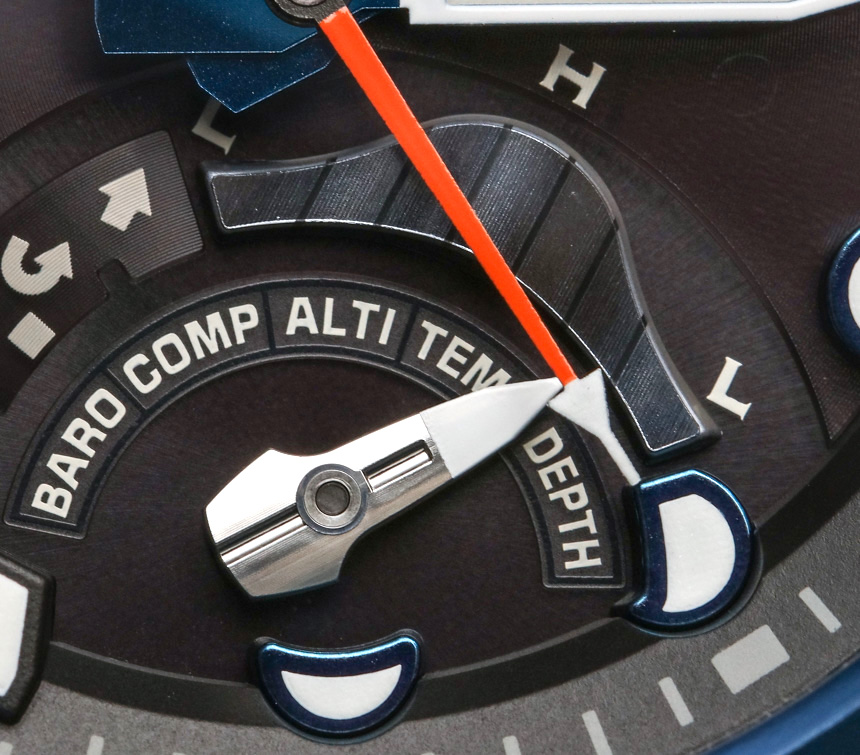 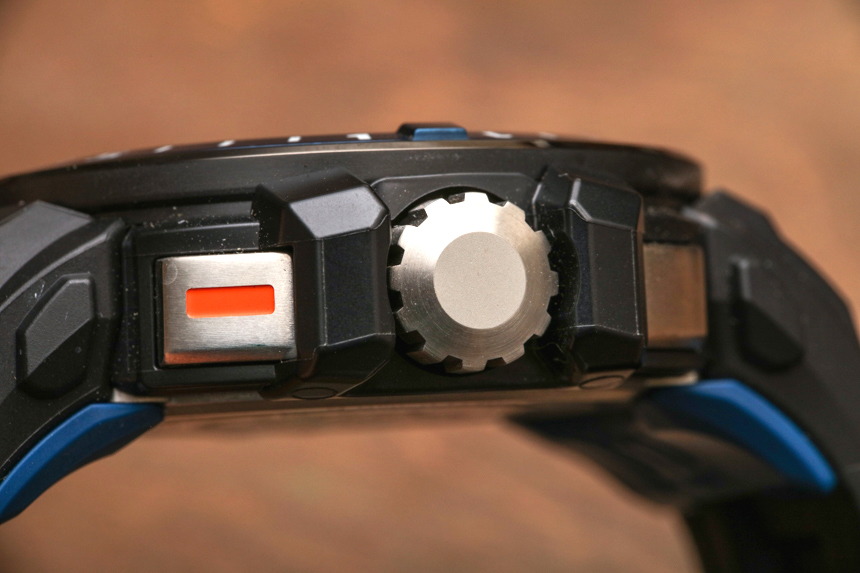 Being one of the newer and fancier mostly analog G-Shock watches, the trick here is in being able to access all of this information. Casio has a sort of odd dilemma these days. That dilemma is that analog G-Shock watches are selling really well (compared to all-digital ones), but that offering a host of different features on an analog dial is much more challenging than on an all-digital one. This requires both innovation and creativity. A few years ago, Casio introduced its “Smart Access” crown, which uniquely replicates the feel of a traditional watch’s crown when it comes to adjusting various elements of the watch. Of course, they also use a host of pushers. This means the Casio G-Shock Master of G Gulfmaster GWNQ1000 has both the Smart Access crown and four pushers on the case. Yes, there is a bit of a learning curve – but after a little bit of “instruction manual diving” you get the hang of how it all works. 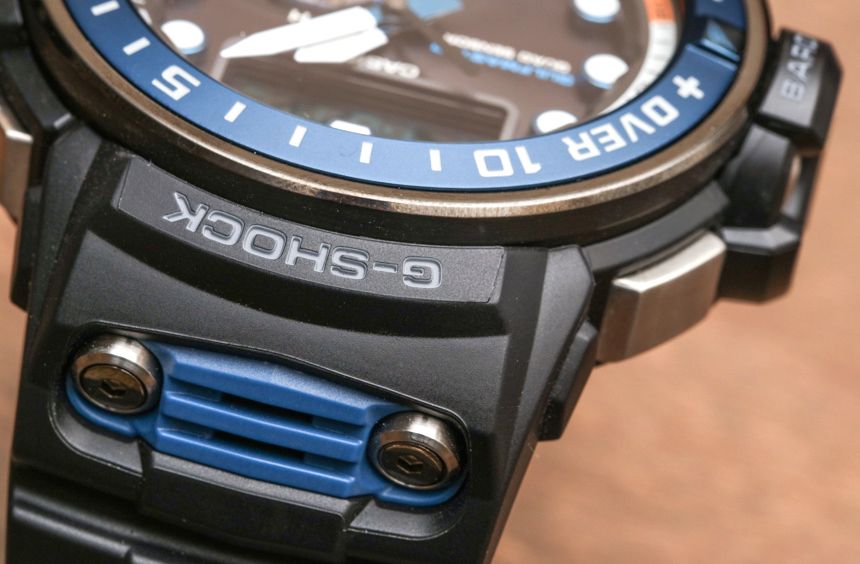 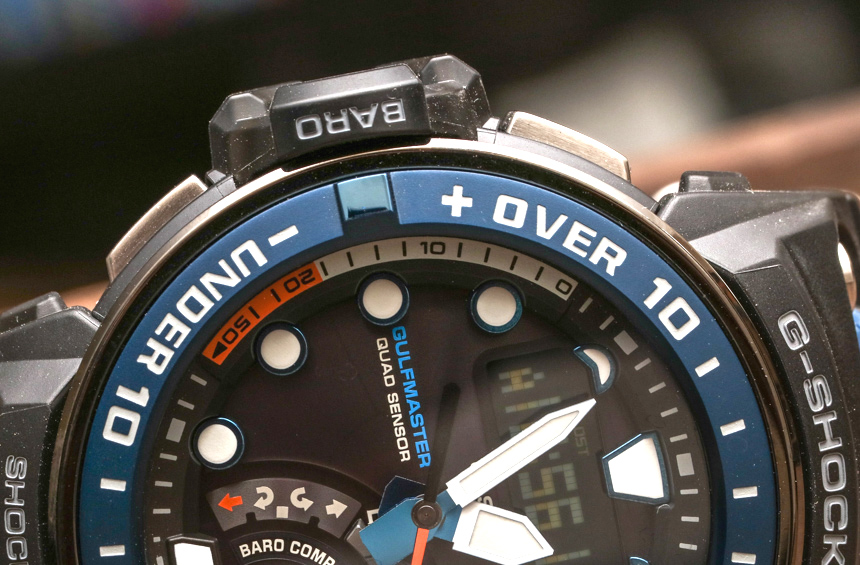 I would say that the only feature missing on this watch that I would have liked to have is the bearing setting feature for the compass. There are a few models which have this, and I hope in the future they include it in more models with the compass feature. The idea is that you can manually set a direction with the compass, and then the watch remembers it. In essence, you set a direction you want to go in, and even if you get disoriented the watch remembers that direction and points you in the right way. On another matter, while it doesn’t bother me, the bezel markers are dedicated exclusively for the barometer function – and if you don’t use that all the time this space might seem better used for something else such as a rotating timing bezel or likewise. 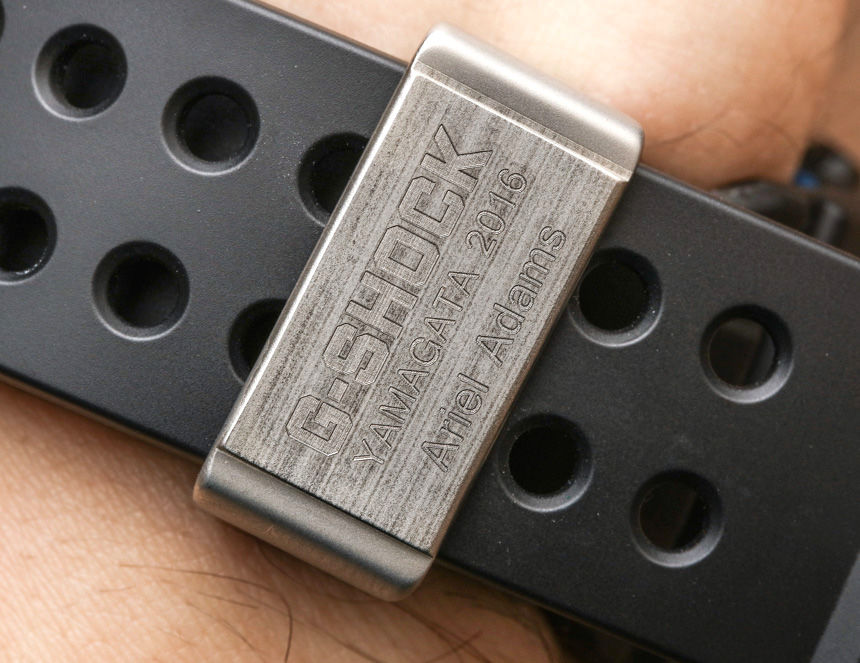 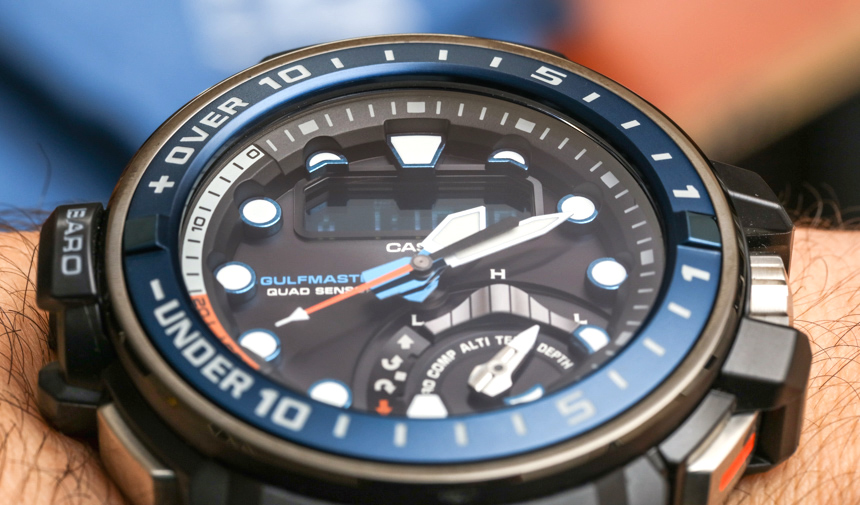 I’ve come to really like the Casio G-Shock Master of G Gulfmaster GWNQ1000-1A, but it took a while since the design looks so different from most other G-Shock watches. Given the prominent hands and hour markers, as well as the cleaner lines on the dial, it just feels a bit unique from the larger G-Shock universe. There is nothing wrong with that, but as I said, it just took some getting used to. Now that I’ve lived with the Casio G-Shock Master of G Gulfmaster watch for some time, I truly like it – not more than what I am familiar with in the G-Shock world, but as something a little bit different. This Casio G-Shock Master of G Gulfmaster reference GWNQ1000-1A model combines a black case with handsome deep metallic blue accents and a hint of orange and white on the dial. I am curious what other people think about it – both those who have a Gulfmaster, as well as those who have just seen them in pictures. 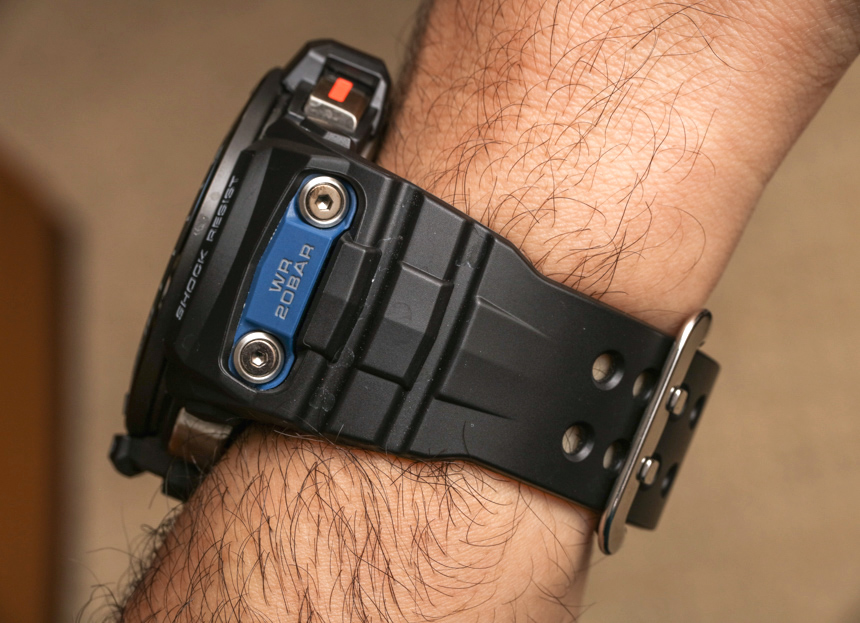 On the wrist, the Casio G-Shock Master of G Gulfmaster GWNQ1000 is 48mm wide, 57.3mm tall, and 17mm thick, weighing 152g. Like most Casio G-Shock watches, the large size is deceptive because Casio engineers these timepieces to comfortably wrap around the wrist. Given that this is a more high-end G-Shock watch, you are also rewarded with better materials, lots of quality metal, and an overall very satisfying wearing and operating experience. 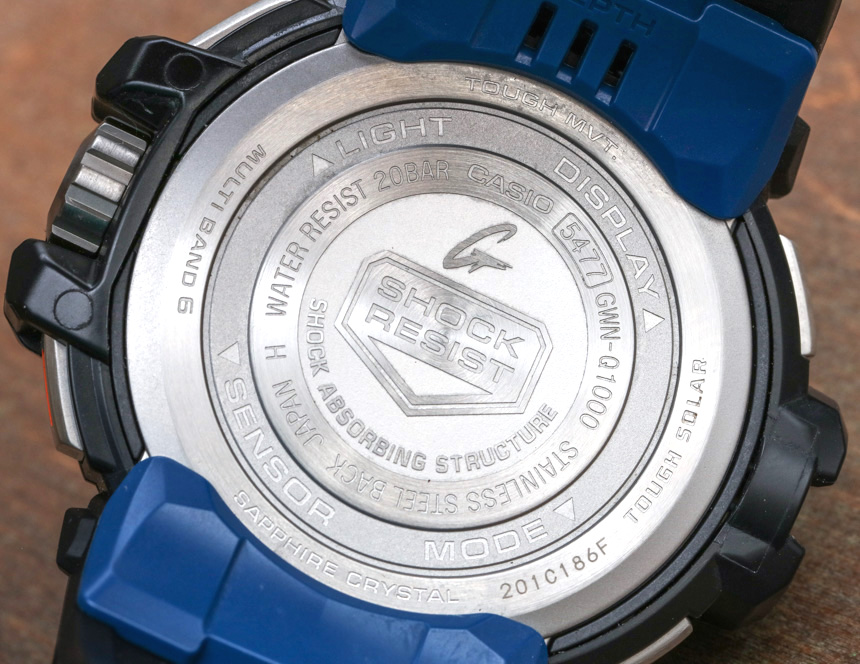 Inside the watch is Casio’s 5477 Module movement. Those very curious about all the features can peruse Casio’s websites since you can spend a lot of time reading all about it. In addition to the many pieces of information it indicates, you also have solar power generation, a “Tough Movement” which is made to automatically realign the hands in the event of shock, and a six-sensor atomic clock radio signal reception. Note that, as a quartz watch, you’ll be happy to see the seconds hand exactly line up with its markers. The seconds hand also moves quite quickly when acting as an indicator for other functions (such as the compass needle) and is produced from carbon fiber. As always, the materials Casio uses for these watches are totally state-of-the-art. 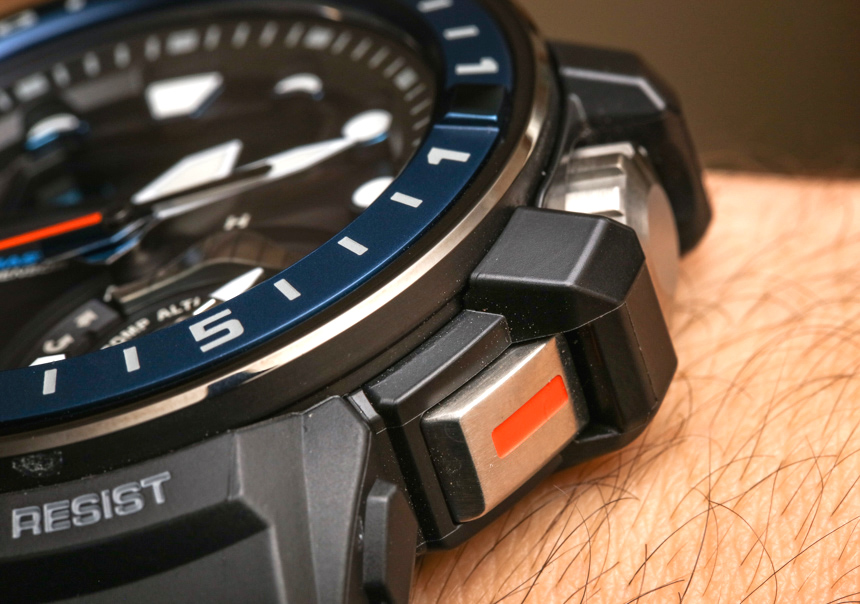 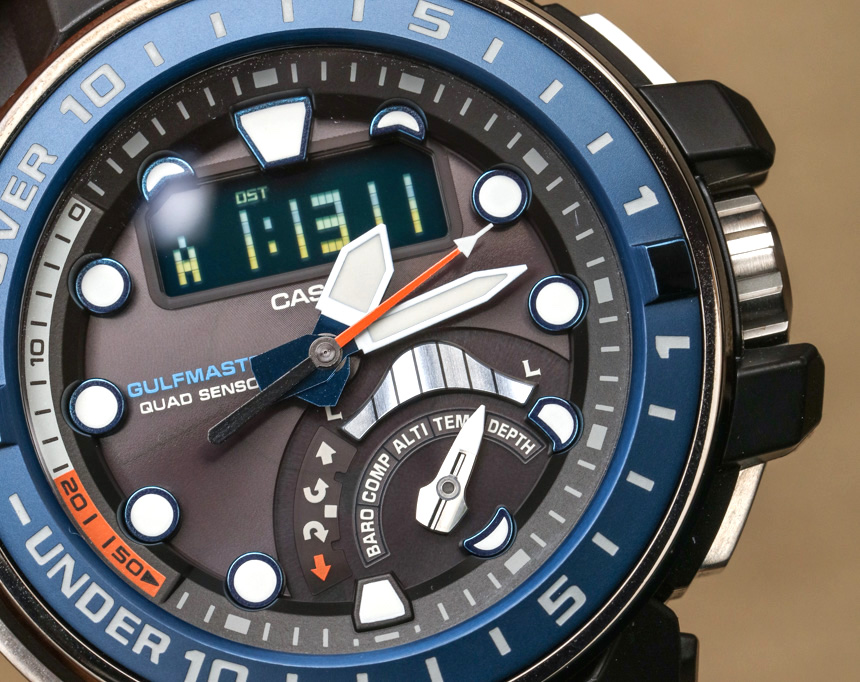 Meant for harsh marine environments, there are surely going to be some people who use the Casio G-Shock Gulfmaster for its intended purposes. For the rest of us, we can simply own a darn cool watch that will serve us well on the occasional times we want to rely on some of its many areas of functionality. Casio is seemingly heedless in its desire to prefect the art of “gadget watch” engineering – and nerds like me continue to benefit as a result. Price for the Casio G-Shock Master of G Gulfmaster GWNQ1000-1A is US$850. gshock.com

Necessary Data
>Brand: Casio
>Model: G-Shock Master of G Gulfmaster GWNQ1000-1A
>Price: US$850
>Size: 48mm wide
>Would reviewer personally wear it: Yes.
>Friend we’d recommend it to first: Boat or marine enthusiast who also dives seeking a cleaner-looking and analog G-Shock watch that they don’t need to worry about putting through a world of abuse.
>Best characteristic of watch: Succeeds in being a still very capable yet different-looking G-Shock watch. Fans of the Gulfmaster range will very much appreciate the addition of the sapphire crystal and the depth meter. Watch actually doesn’t feel like it is trying to do too much.
>Worst characteristic of watch: Not all Casio G-Shock fans will take a liking to the distinctive style that varies from the G-Shock norm. Bezel markings dedicated for the barometer function will be loved by those who rely on this feature, but might seem too prominent and infrequently useful for those that don’t.