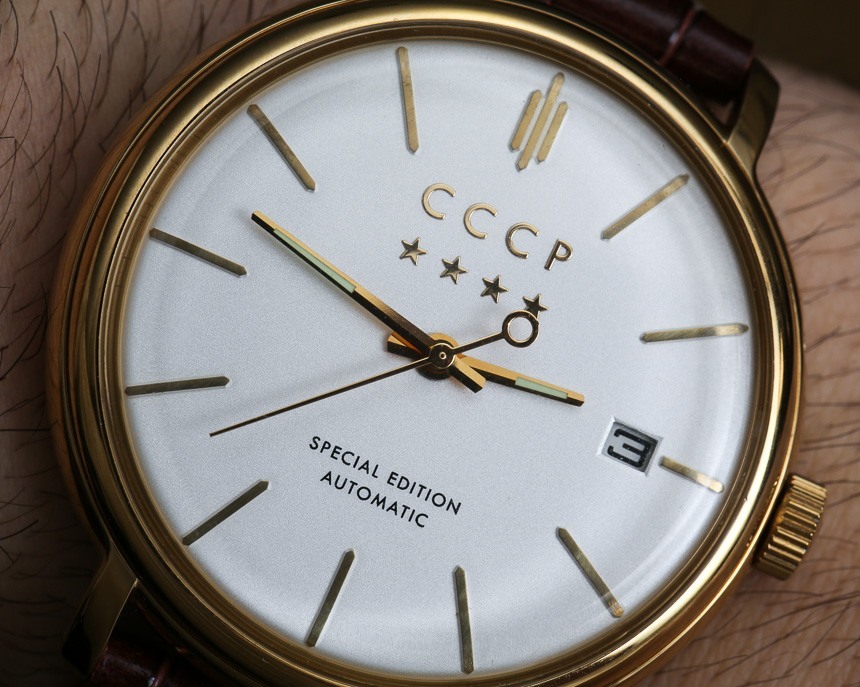 This is the CCCP Heritage ref. CP-7019-05 watch, and it comes from a brand called “CCCP Time,” which – based out of Hong Kong – produces a range of USSR-era themed watches. Some of these watches contain quartz movements, and others contain mechanical movements. Of the mechanicals, some are Japanese, and some are historic mechanical movements produced in the USSR by the watch makers Slava. This CCCP Heritage watch is among the latter, and contains a restored Slava caliber 2427 automatic movement that the modern brand was able to acquire as part of what is an interesting story.

On the surface, CCCP Time is a company producing Russian-themed watches along with a host of other companies. In the West, the history of Russian-made watches is not entirely well-known, but they have a fascinating history. When the USSR annexed parts of Germany they gained new skills in watch making, and over the years the Soviet Union built a range of watch factories across its territory, especially in places such as St. Petersburg and Moscow. Today, only one or so of these factories is still in operation (Raketa I believe), but there are some serious collectors who seek out Russian-made Soviet watches. One such historic Russian watchmaker was Slava, and they had a manufacture in Moscow. 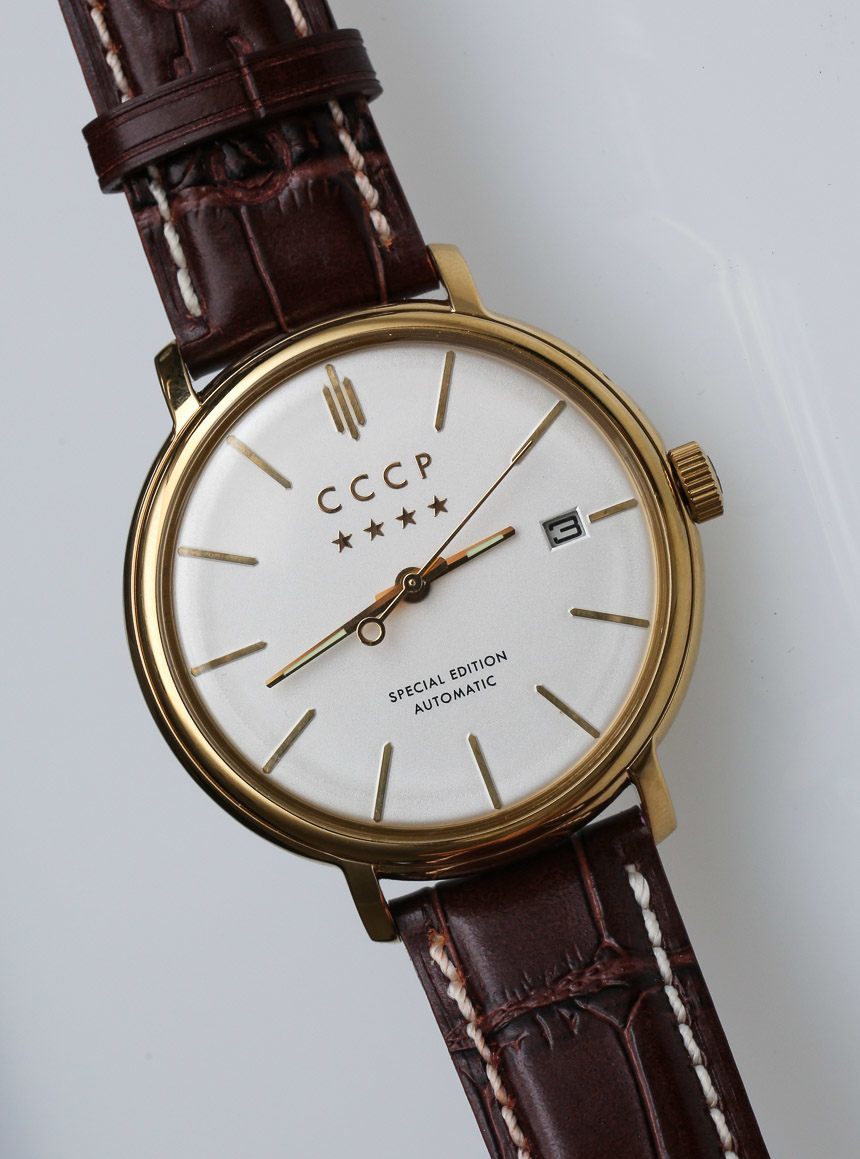 Many Russian-made watch movements were copies of other designs, which of course wasn’t uncommon for the era. The Soviet Union was responsible for producing timepieces for its people, which was an important part of daily life. A particular interest for Russian watch makers was durability and dependability. Because resources were scant, it was important to produce timepieces that required as little service as possible. In many instances they were perhaps not as accurate as Swiss or American watches, but they might last longer between service times. Think of the AK-47 rifle, and its goal of being like a tank and able to put up with a lot while still firing. As I understand it, a similar mentality was applied to the design of Russian mechanical watch movements.

The Moscow Slava movement factory closed down years ago, and I am not familiar with the full chain of ownership, but from what I understand it fell into the hands of Alexander Shorokoff. Watch lovers recognize that name associated with a really nice brand based in Germany designed by the Russian Mr. Shorokoff. So he owned the no longer operating Slava factory and the items it contained. Apparently, he sold off a lot of movements to CCCP Time, that used them for the production of some of its mechanical watches such as the CCCP Heritage. CCCP Time further claims that the movements were in understandably poor shape and that a fair amount of restoration work and new parts were required to make them operate properly. 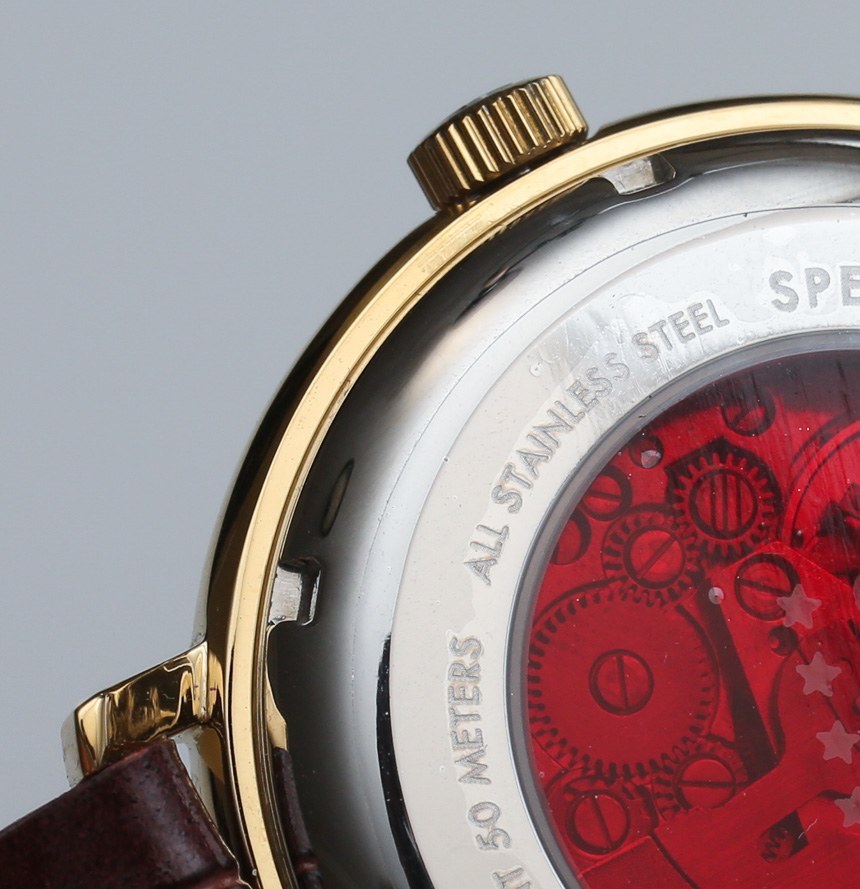 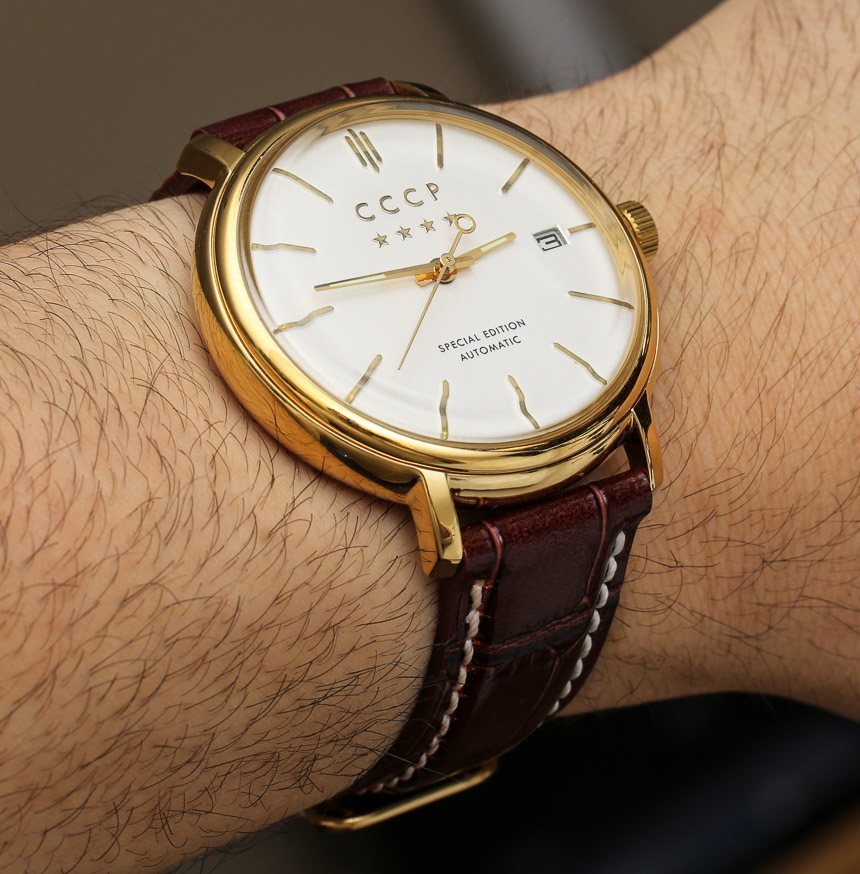 One of the brand’s more simple pieces is the CCCP Time Heritage, and it is a vintage-style dress watch in a modern size. There are some interesting elements to it that may or may not be intentional, but work together to give this new watch an “antique flair” at what is a very affordable price. The name of the brand “CCCP” of course is just the Cyrillic spelling of “USSR,” and while not particularly original, does make it clear to people what the theme of the brand and timepiece is all about.

Note that in the pictures there is a piece of protective plastic over the caseback, which is why the window to the movement looks a bit cloudy and has some bubbles. The mineral crystal caseback window is tinted red (for obvious reason), and the industrial-looking automatic movement that offers the time and date can be inspected inside the case. In terms of Russian-made movements, the Slava 2427 is among the simpler and less expensive historic Russian movements that you can find. It operates at 18,000 bph and was intended to be an entry-level work horse caliber. Given the low cost of this watch, the mixture of design and movement offer a nice nostalgic feel for many. 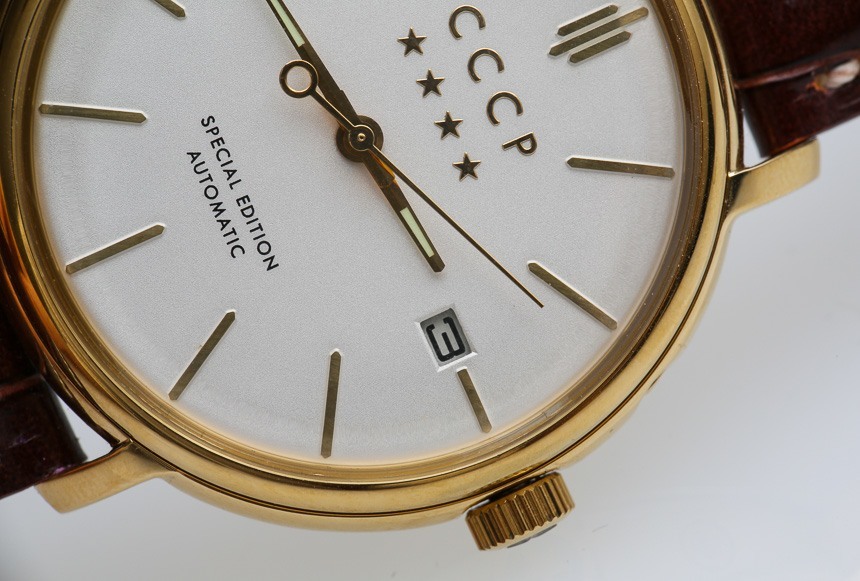 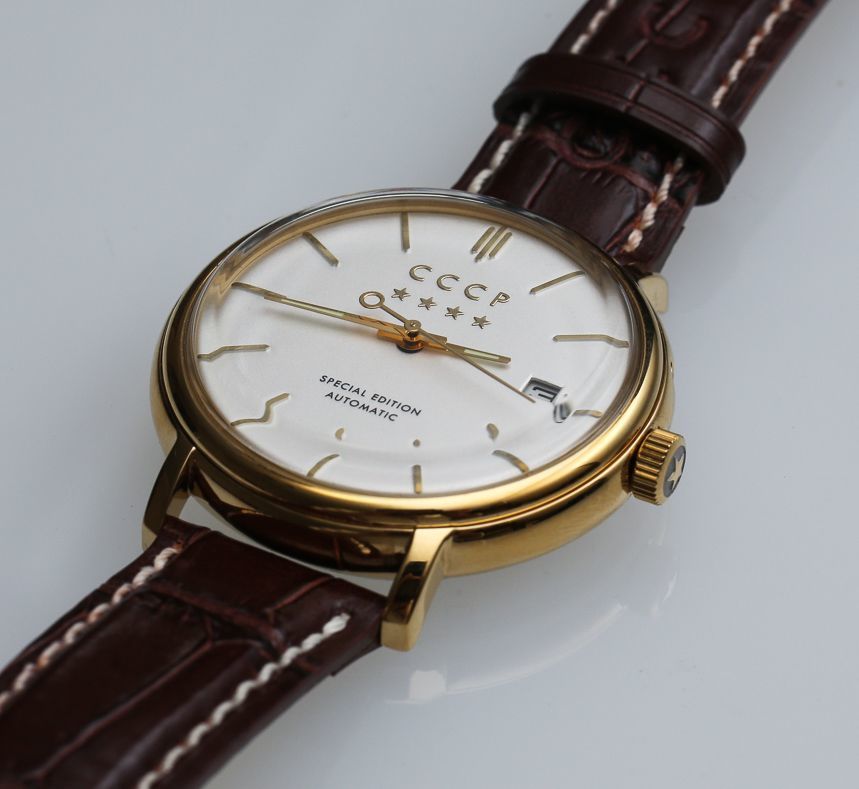 The 43mm wide case is certainly modern in size and at 14mm thick, it offers a substantial presence on the wrist. The case and dial are historically-themed and the CCCP Heritage is available in a range of styles. This version comes in gold-toned steel with a white dial and matching gold-toned hour markers and hands. The hands could be longer but the overall dial presentation is attractive and on-point with the theme of the watch. An interesting detail are the hour markers. Remember that this is a vintage-theme watch, so I actually find it appropriate the that hour markers are produced with a metal that offers a slightly tarnished, aged look.

Honestly, I don’t know if that design element was intentional or not, but it works. The aged look of the metal used for the hour markers helps promote the overall persona of this timepiece as something actually from the USSR era. The design of the CCCP Time Heritage overall is dressy, and unlike some of the more colorful or edgy design of other CCCP Time watches, the Heritage is conservative enough for frequent wearing. 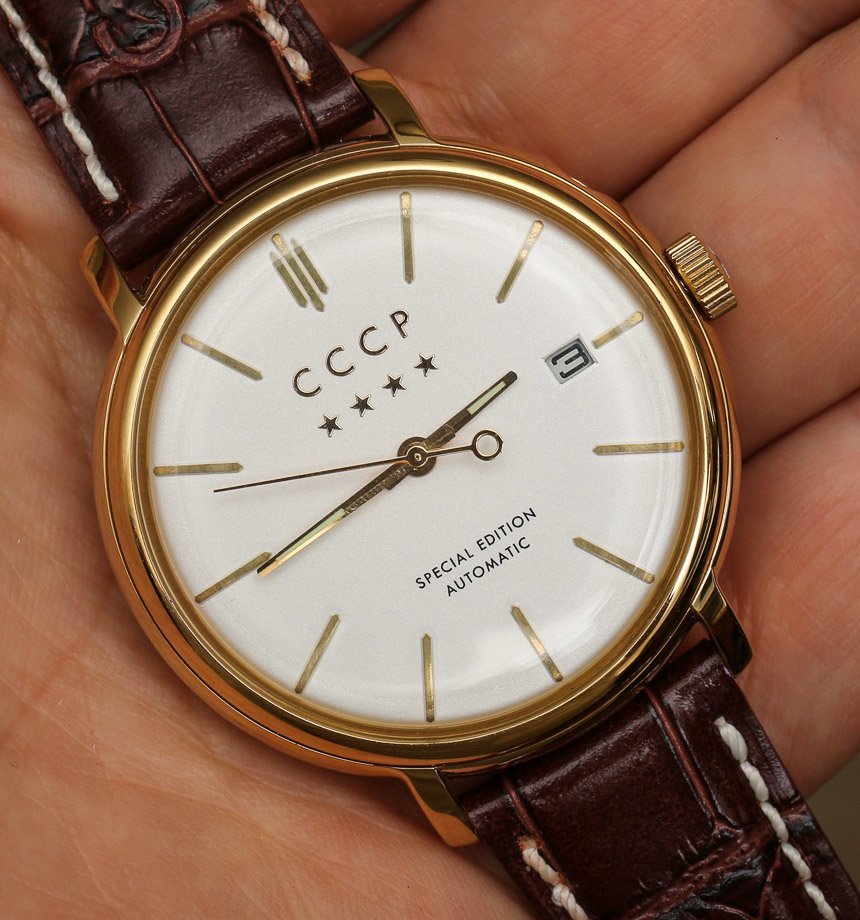