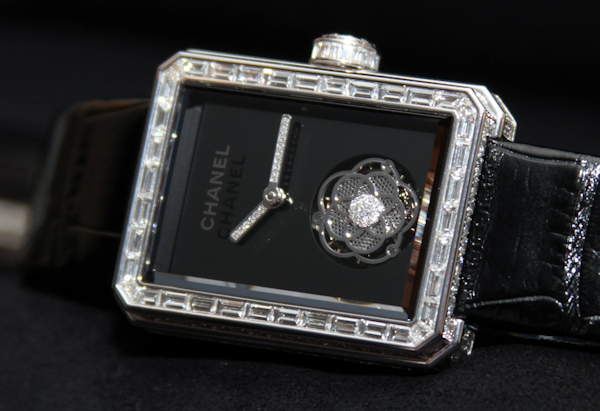 Limited to just 20 pieces, this is a Chanel timepiece you are likely to never actually see in person. I did though, and I am happy to share some views of this award winning high-end watch for women. Even though it wasn’t made for my wrist, I still find it to be a very pretty timepiece.

Produced as an homage to the original Chanel Première watch collection from 25 years ago, the Première Tourbillon Volant is a beautifully designed rectangular-shaped watch with a case that is made to look a bit like a baguette-cut stone. The case shape is adapted from the original Première collection, but made a bit larger of course. Inside the watch is a special flying tourbillon movement which was produced by Renaud & Papi, continuing Chanel’s relationship with the mostly Audemars Piguet owned specialty movement maker and designer. 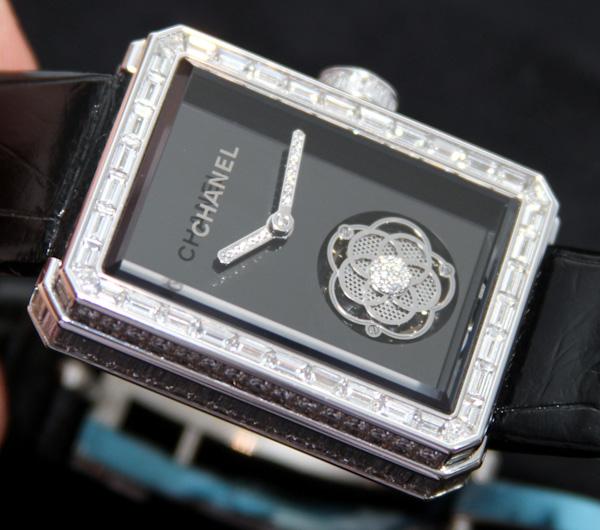 The Chanel Première Tourbillon Volant made [watch] news again recently as it was voted the best ladies watch of 2012 in the Grand Prix d’Horlogerie de Geneve (GPHG), which is like the Oscar’s of the watch industry. Given the piece’s extreme price and exclusivity, I don’t think many people are going to run out and buy one. It does however give Chanel some bragging rights – as its more mainstream J12 watches (typically for women) would not likely ever be recognized by the mostly super high-end award show. Having said that, Chanel hasn’t traditionally had many problems selling J12 watches.

The Première Tourbillon Volant comes in an 18k white gold case that is 37mm tall by 28.5mm wide. It has a load of diamonds all over it. The bezel has 3.9 carats of diamonds on it comprised of 38 baguette-cut stones and 52 brilliant-cut ones. The rest of the case has an additional 3 carats of 47 baguette-cut diamonds. More diamonds exist on the 18k white gold clasp, the crown, as well as on the tip of the flower-style flying tourbillon cage. Oh, and don’t forget the diamonds on the actual hands – you don’t see that very often.

In honor of what made Chanel watches so popular, the dial of the Première Tourbillon Volant is done with a piece of polished black ceramic. Note how the sapphire crystal over the dial has beveled edges. What I like about the watch is that despite the fact it is heavily about being covered in diamonds, it does not appear that way at first glance. The mostly minimalist dial is stark and attractive, focusing on the hands and tourbillon. Even though they do have diamonds, it is not meant to be a blindingly shiny timepiece. Once you look at the case from other angles, then you start to see the delicate stone work.

The tourbillon “flower” is supposed to be a camellia, which apparently was Coco’s favorite flower. It is quite nice looking and is a solid effort at “feminizing” the tourbillon. The Chanel Première Tourbillon Volant itself is not what I would call a girl’s watch. It is a handsome ladies watch with a lot of elegance and sense of high-stature. Exactly the type of thing the luxury industry likes. Consider it a watch for a mature, successful woman who has already left her footprints on this planet. Now she just has to get the hang of reading the time on this watch. More details from Chanel here.