The unrestrained use of floral motifs on ladies’ watches continues, and despite my objection to this feminine cliche, I acknowledge that it is really well-executed in some cases, resulting in watches that actually appear to be made for adult women. The best floral applications on timepieces are applied in either abstract or unexpected ways, and the Chopard L.U.C XP Esprit de Fleurier Peony does both.

The peony is represented on the dial using mother-of-pearl that is carved out and set with diamonds in a pattern that resembles the outlines of the peony’s irregular petals. Chopard’s stylized representation is perfect because it reflects the unruly, lush petal arrangement of the real-life peony, which seems abstract to begin with – daisies (e.g., as seen on the Christophe Claret Marguerite watch – hands-on here), by comparison, are too literal and uniform to be displayed abstractly or elegantly on a dial, in my opinion. The real highlight of the Chopard L.U.C XP Esprit de Fleurier Peony, however, is the decorated movement visible through the caseback. Every surface of the bridges is engraved using a rare métiers called Fleurisanne engraving. Fleurisanne is a technique that involves the progressive removal of metal to form a shallow relief, usually scroll or floral patterns, using a variety of engraving tools. Once raised above the background plane, the flowers and scrolling are given a high polish, and the base surrounding them is stippled – by hand, one dot at a time – to create a grainy surface. It is then rhodium plated to create an even greater contrast with the polished surface above. The bridges are also chamfered and rhodium plated. Fleurisanne engraving was developed and practiced in Fleurier (where the Chopard manufacture is located) in the 19th century, and it was part of the special cachet of the region’s watchmakers. Chopard has revived the tradition and trained its craftsmen in the intricacies of the art. It takes two-and-a-half weeks to complete one watch, including two weeks just for the engraving of the movement. The Chopard L.U.C XP Esprit de Fleurier Peony not only has a high watchmaking exterior and finish, but also an elite movement inside. It contains the L.U.C automatic Caliber 96.23-L, with two stacked barrels for a 65-hour power reserve and a micro-rotor that keeps it to a slim 7.5mm cased thickness – essential now for a ladies watch. Few manufacturers are creating slim automatic calibers for ladies’ watches, and Chopard has a definite advantage with its in-house manufacturing capabilities, particularly going forward in a market that requires watch manufacturers to exploit every advantage possible. Chopard began life in 1860 as one of Switzerland’s original watch manufactures in the Swiss Jura town of Sonvilier. Its in-house caliber, the L.U.C series, is named for its founder, Louis Ulysse Chopard, but it is current co-president Karl-Friedcrich Scheufele, who deserves the credit for founding Chopard as the watch company it is today. Like most heritage brands, the firm slowed down or stopped making mechanical movements at some point, particularly with the advent of quartz, and although it has had much success with its timepiece designs over the years – including the iconic Mille Miglia and Happy Diamonds collections – it wasn’t until 1996 that the company began to produce its own movements again. Chopard co-president Karl-Friedrich Scheufele’s vision was to establish a watchmaking operation that builds in-house movements with Chopard-made components (everything but the screws) and finished with Chopard-made tools. In 1997, a year after establishing Ébauche Fleurier, Chopard emerged with its first caliber, the 1.96, cased in the L.U.C 1860. Today, Chopard produces several distinct families of watch movements, with 50 movement variations, including a perpetual calendar and a tourbillon. The Chopard L.U.C XP Esprit de Fleurier Peony is heavily geared to the Asian market. It is made in a limited edition of eight, a lucky number in East Asia, and the peony represents wealth and honor in Chinese culture. Under the Tang dynasty, peonies were grown on a massive scale and the destiny of this flower was even linked to that of the country, with the blossoming of the peony reflecting the prosperity of China itself. It is symbolic of good health, abundance, and happy marriages. This is not to say the watch wouldn’t appeal to a North American audience, say, especially anyone who appreciates the delicacy of the Fleurisanne engraving, but in general, the symbolism of motifs such as flowers is more appreciated in the “East.” The 35mm Chopard L.U.C XP Esprit de Fleurier Peony watch is priced at $98,000. It is a limited edition of eight pieces, exclusive to Chopard boutiques. The 18k rose gold case is 35mm wide and 7.5mm thick, and water resistant to 30 meters. It is fitted with a brushed pink canvas strap. The bezel, lugs, and case side are set with 2.23 carats of diamonds. chopard.com 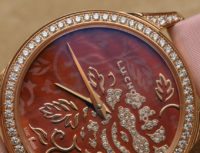 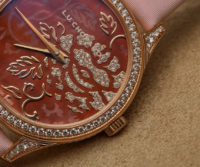 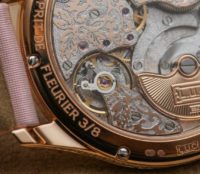 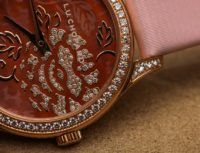 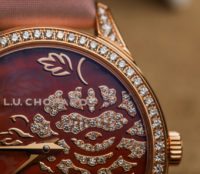 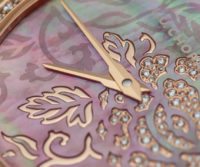 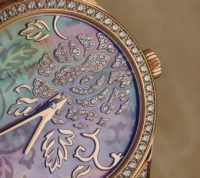 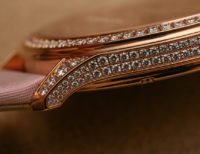 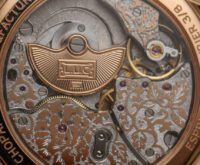 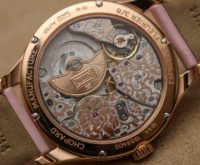