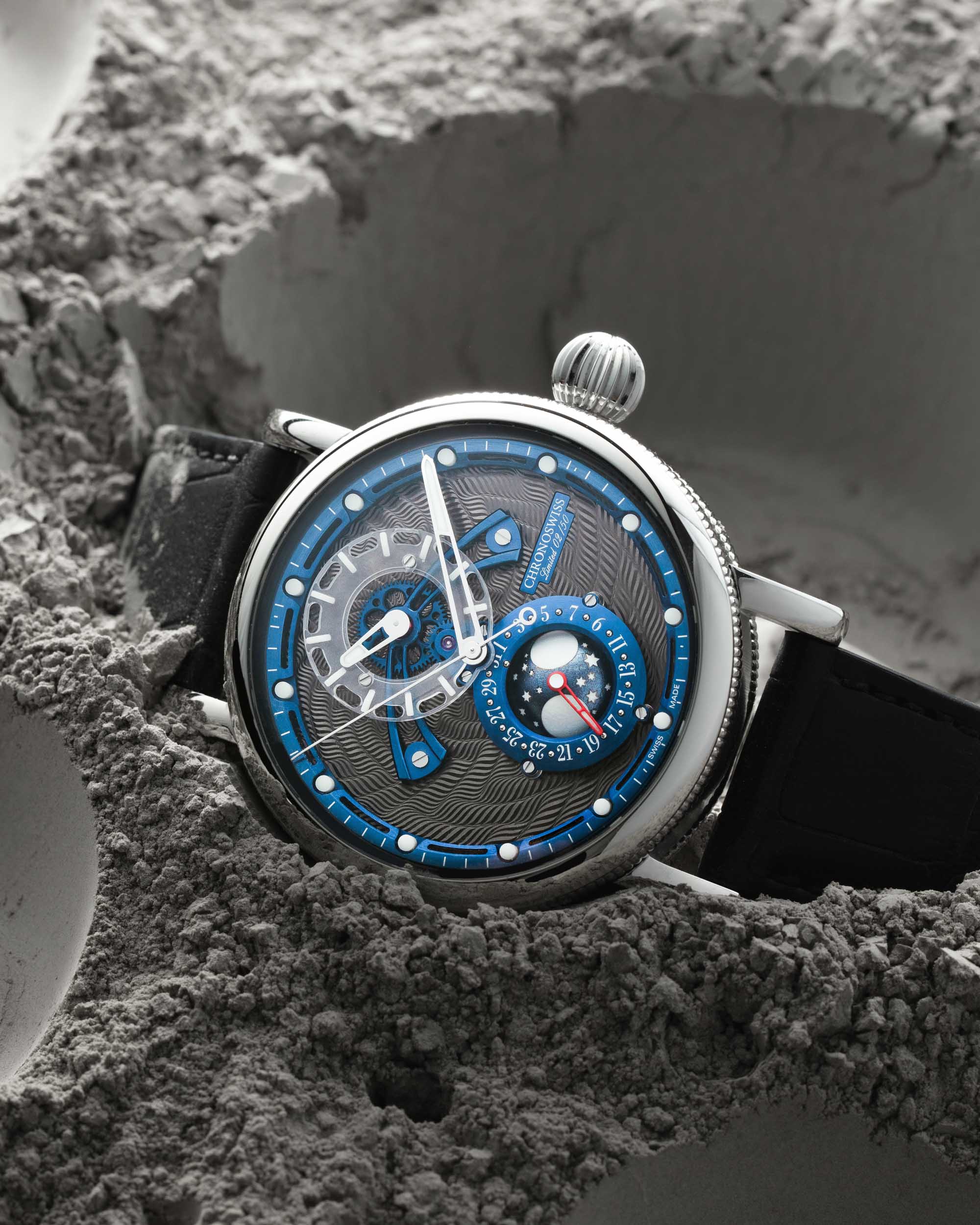 Drawing inspiration from our solar system and the mysteries of outer space, the latest addition to the Chronoswiss lineup comes in the form of the Space Timer series, and it expands upon the platform of the brand’s Open Gear collection to create one of the most complex modes that the company has ever put forward. Featuring a three-dimensional dial that showcases high-tech materials and a unique regulator setup with a titanium spherical moonphase display, the Chronoswiss Space Timer collection makes its debut appearance in the form of two limited edition models, with one drawing its aesthetic inspiration from the Earth’s moon, and the other inspired by the planet Jupiter. Chronoswiss has made it clear that the Space Timer Moonwalk and Space Timer Jupiter watches will be the first of a series that marks the brand’s interstellar journey,  and while both models are essentially the same watch at their core, they each offer a highly different take on the brand’s unique and structural aesthetic. 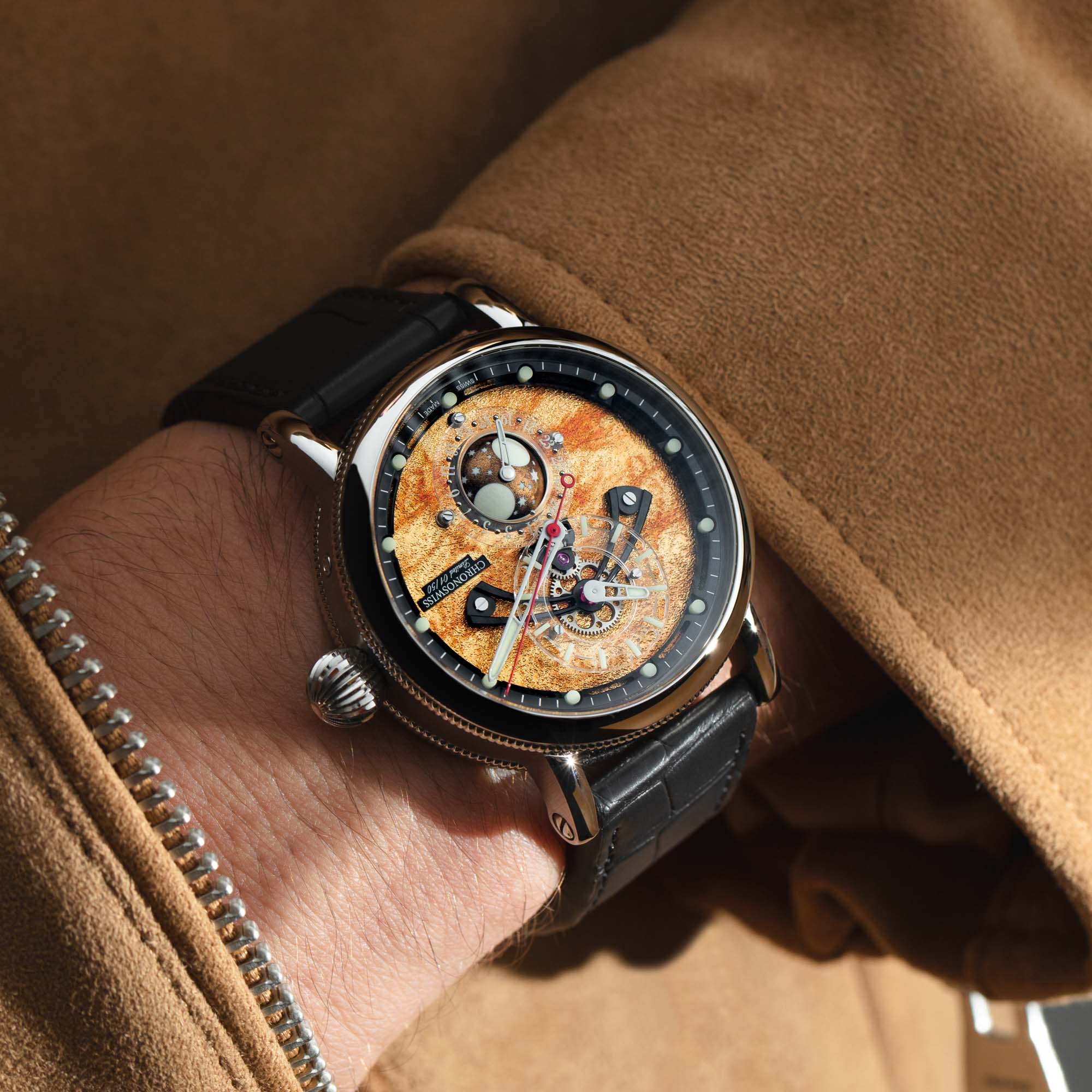 Both models feature a 19-piece stainless steel case that measures 44mm-wide by 15.2mm-thick. Fitted to the top of the case is a domed sapphire crystal surrounded by a polished smooth stainless steel bezel. The sides of the case receive two thin bands of knurling, while a large onion-shaped winding crown and a screw-down display caseback help offer 100 meters of water resistance. Traditionally shaped lugs hold a 22mm-wide alligator strap, and each of the strap holders is screwed down with the brand’s patented Autobloc system. All things considered, the Chronoswiss Space Timer’s external case offers a rather classical and traditional overall aesthetic, which creates a unique contrast against its rather modern and unconventional dial design. While the case itself offers plenty of visual intrigue with its knurled bands set against its brushed and polished surfaces, it could just as easily be an appropriate fit for a very traditional dial design, rather than a three-dimensional regulator that features components made from carbon nanotubes and titanium. 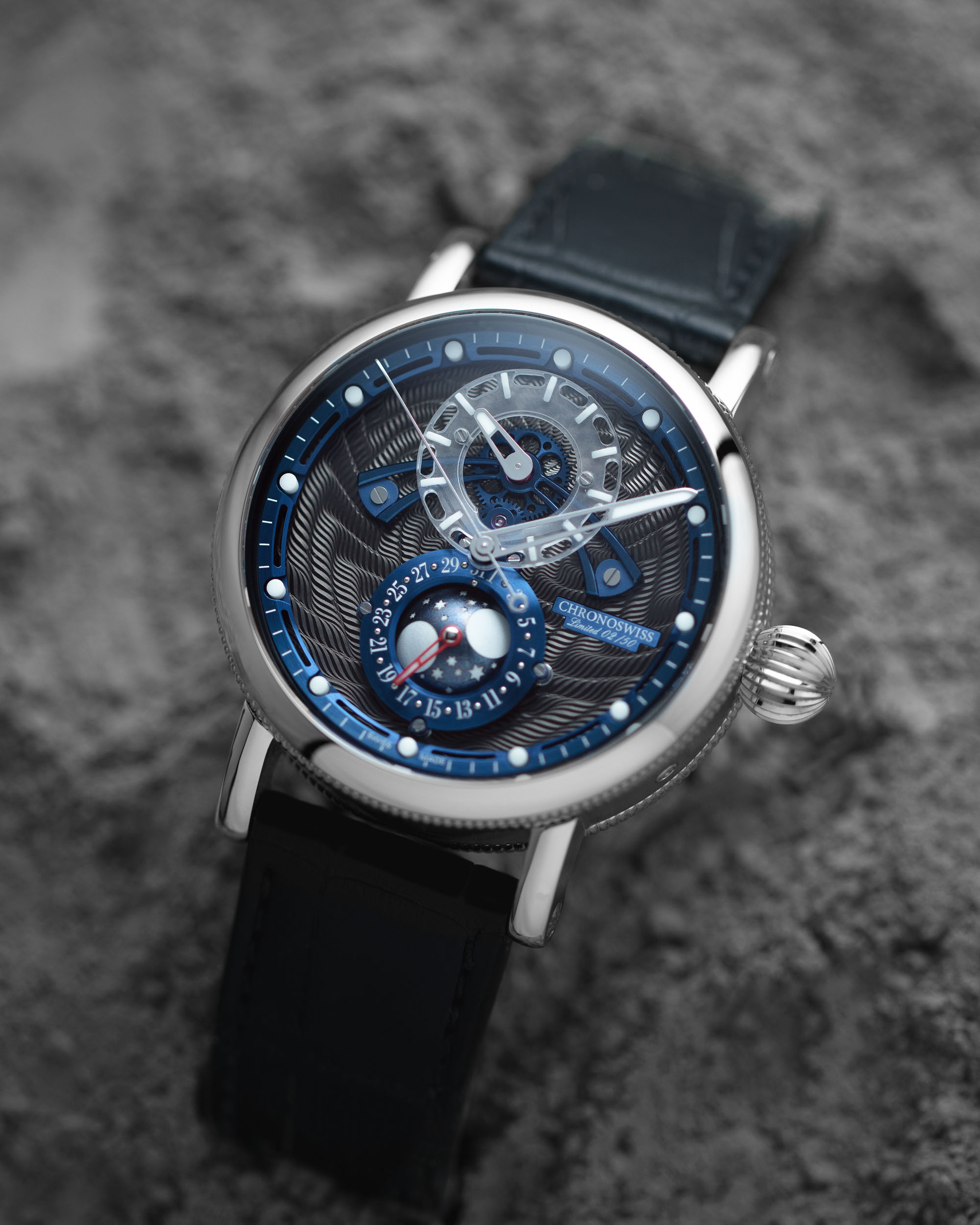 The dials found inside the Space Timer Moonwalk and Space Timer Jupiter both follow the same regulator-style layout, and each one is constructed from 63 separate components to create a dynamic and architectural overall appearance. The dial layout itself is based upon the core design concept of the Chronoswiss Open Gear collection and it features the hours displayed by a register on the top half, while a pair of large centrally-mounted hands track the minutes and seconds against a raised minute track set with large luminous cylinders. However, setting the Space Timer apart is its titanium spherical moonphase display, which resides on the lower half of the dial and features an additional hand protruding through the top of its surface that points to the date on a ring that surrounds it. 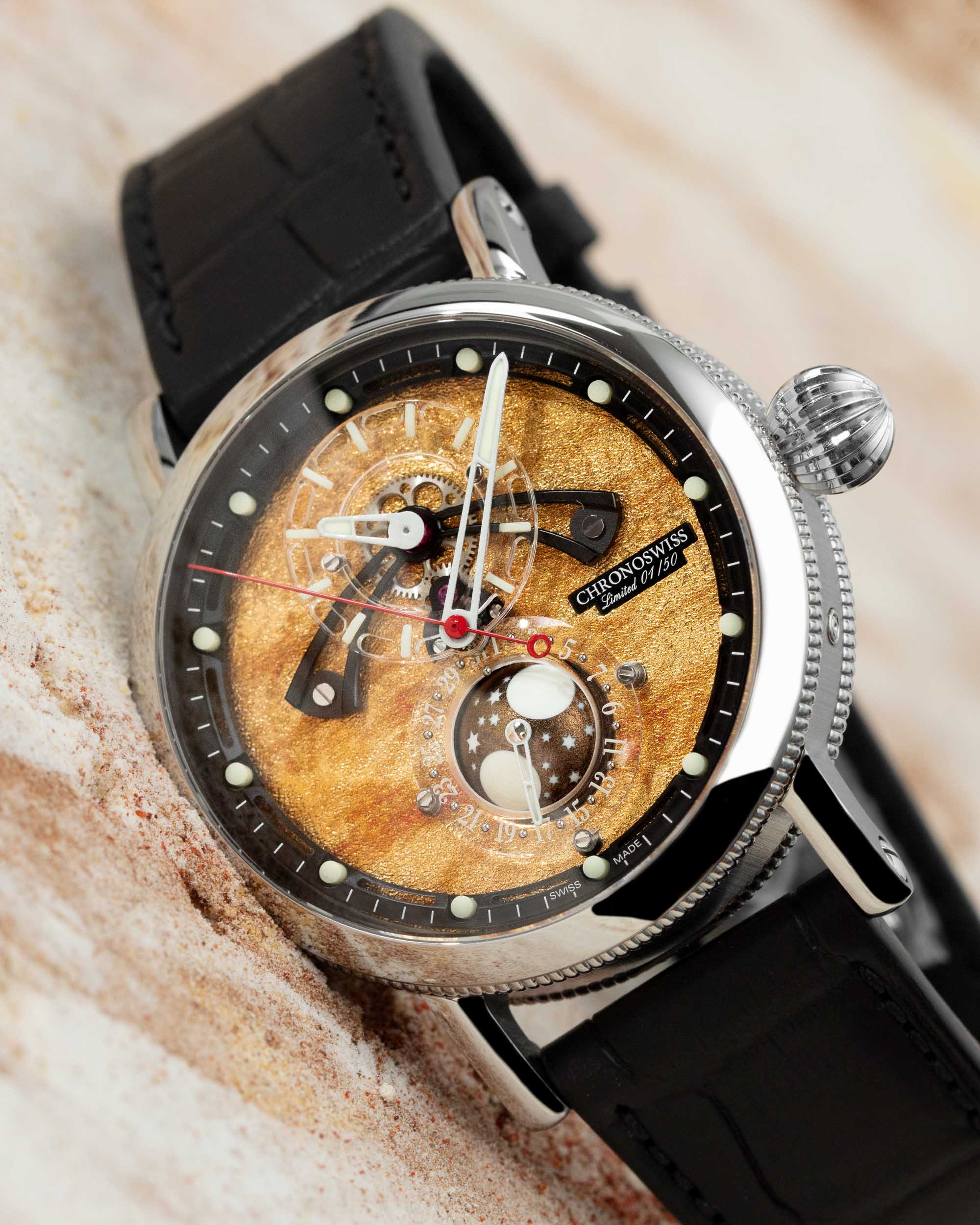 Each number for the date appears as either a small Arabic numeral or as a tiny stainless steel sphere, and the entire ring itself is part of a raised structure surrounding the moonphase that sits above the rest of the dial’s surface. On both Chronoswiss Space Timer models, the hour hand indicates the time against a clear disc crafted from ITR2, which is a new-generation carbon nanotube material that is eight times lighter than steel and is capable of taking on a variety of different colors and surface finishes. The disc itself is positioned above the large train wheel bridge and is finished with luminous marking to give the appearance that the glowing portions are floating above the dial in the dark. 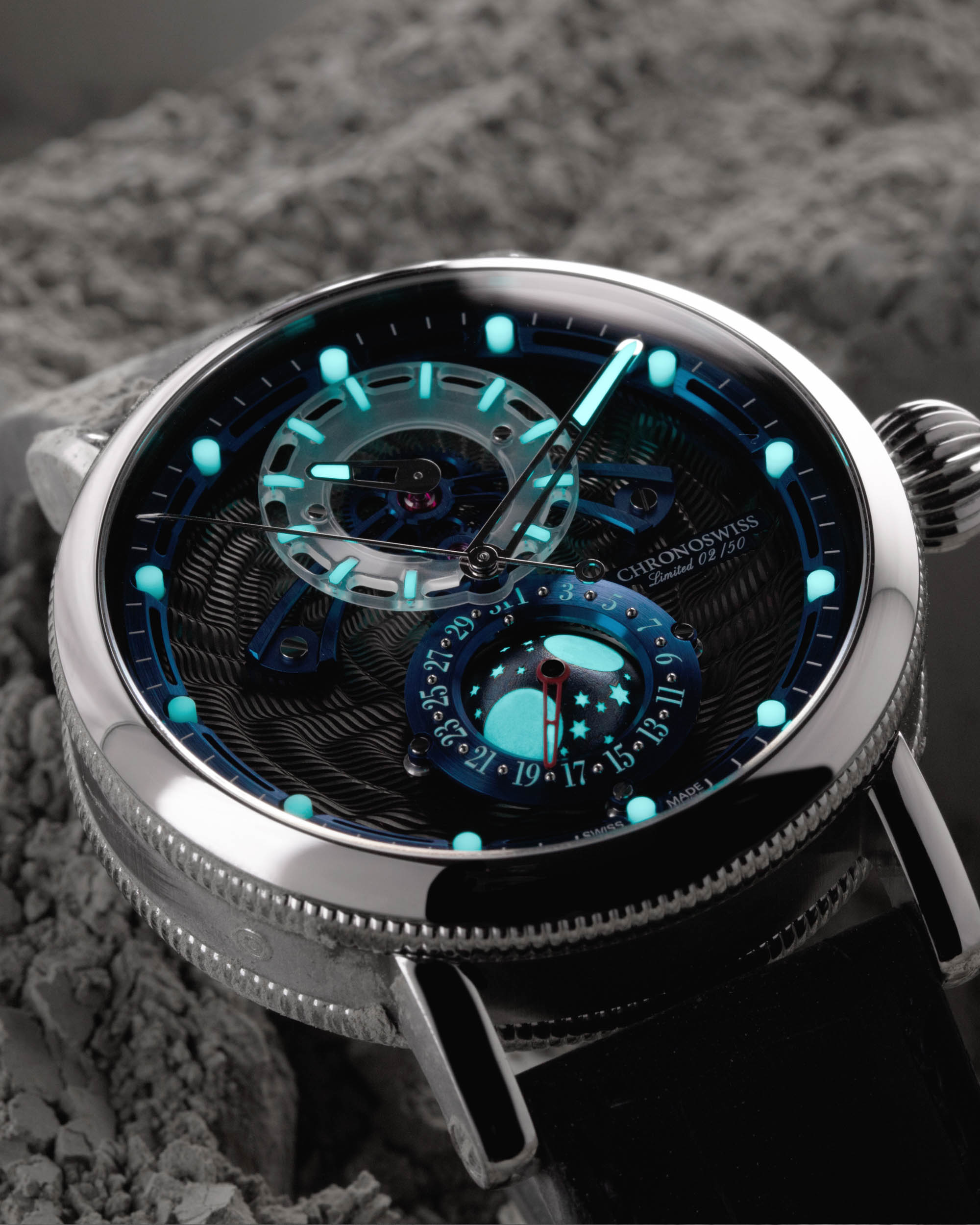 On the Space Timer Moonwalk model, the dial surface is adorned with a special handmade guilloche pattern developed by Chronoswiss, and it features a dark gray galvanic meteor coating on its lower base layer. The various raised elements on the dial such as its minute track, train wheel bridge, moonphase display, and date ring structure all receive a bright blue CVD coating, while the ITR2 hours disc is given a sandblasted finish with Super-LumiNova markings, and the skeletonized hand for the date is finished bright red for a contrasting splash of color. 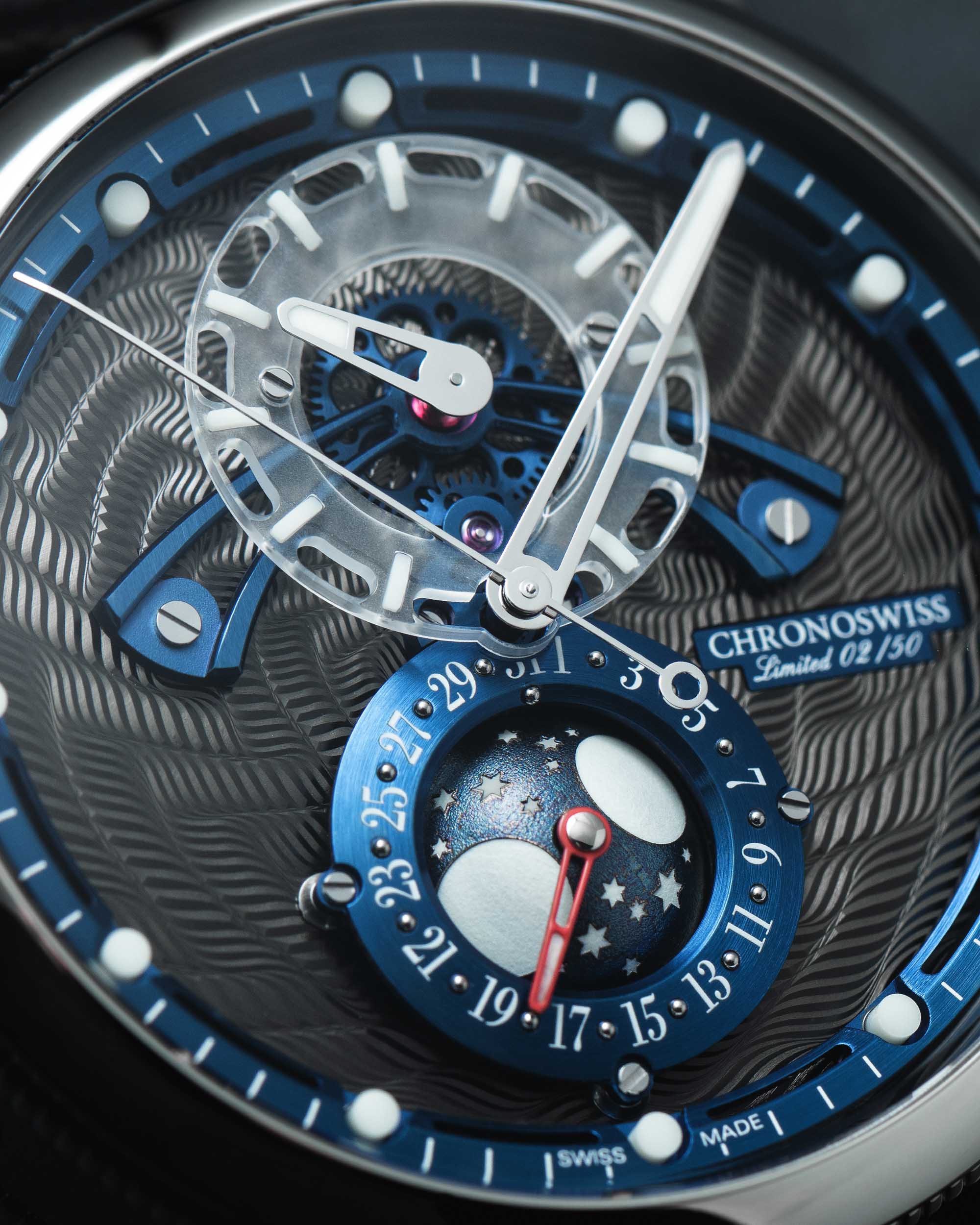 Meanwhile, on the Space Timer Jupiter, the lower dial surface is laser-sculpted with a nano-print finish, which makes each example slightly unique and resembles the appearance of Jupiter’s colors and gas planet structure. The minute track and train wheel bridge are given a galvanic black finish, while the ITR2 disc for the hours is entirely transparent with Super-LumiNova markings. Additionally, while both the titanium moonphase sphere and the raised structure for the date appear in blue on the Moonwalk model, the Space Timer Jupiter features its moonphase sphere in a thermally colored orange hue, while its date disc structure is crafted from clear ITR2, which gives its markings the appearance of floating above the rest of the dial surface. Lastly, while it is the date hand for the date display that receives the red finish on the Moonwalk model, the Space Timer Jupiter features its splash of red on its centrally-mounted running seconds hand. 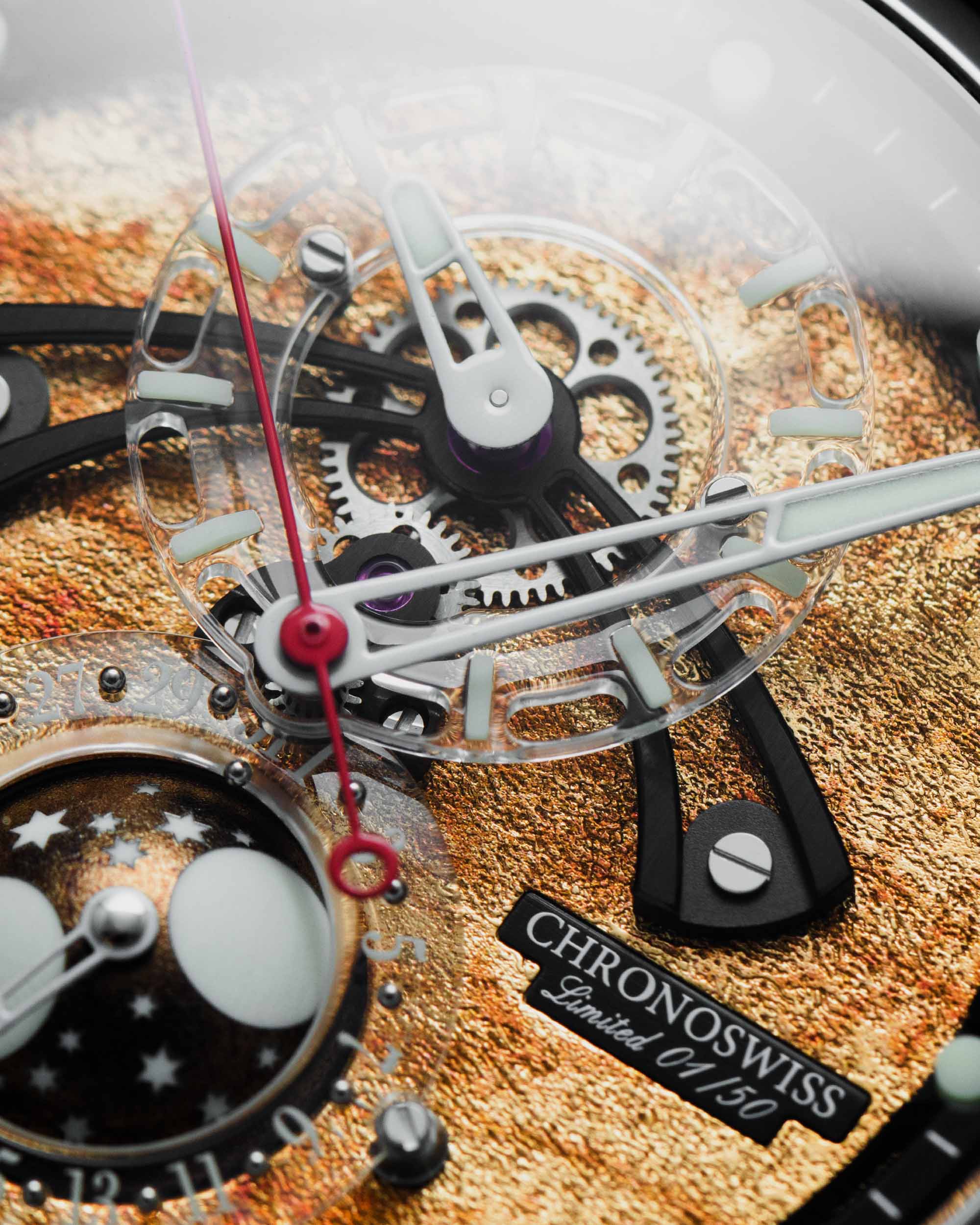 Powering the Chronoswiss Space Timer collection is the brand’s Caliber C.308 automatic movement. Swiss-Made and self-winding with 33-jewels, the Caliber C.308 runs at a frequency of 28,800vph and offers a power reserve of approximately 42 hours. At its core, the Chronoswiss Caliber C.308 is based upon a well-known and proven design from ETA, although it goes without saying that it has been modified quite a bit in order to achieve the unique display and functionality present on the Chronoswiss Space Timer series. In addition to the modifications required to achieve the appearance on the dial side of the watch, the bridges and plates themselves are decorated with perlage, and the skeletonized rotor is given Geneva stripes with a dark gray DLC finish. While many space-inspired watches are quite on-the-nose when it comes to their overall designs or are otherwise leaning into the modern aesthetic often associated with space exploration, the Chronoswiss Space Timer is a space-themed watch done in a rather classic style that stays true to its watchmaking-focused roots. Just by looking at either the Moonwalk or Jupiter models, it might not be immediately clear that the watch is inspired by one of the heavenly bodies of our solar system, yet once someone tells you about it, the aesthetic inspiration behind its design does become rather clear. 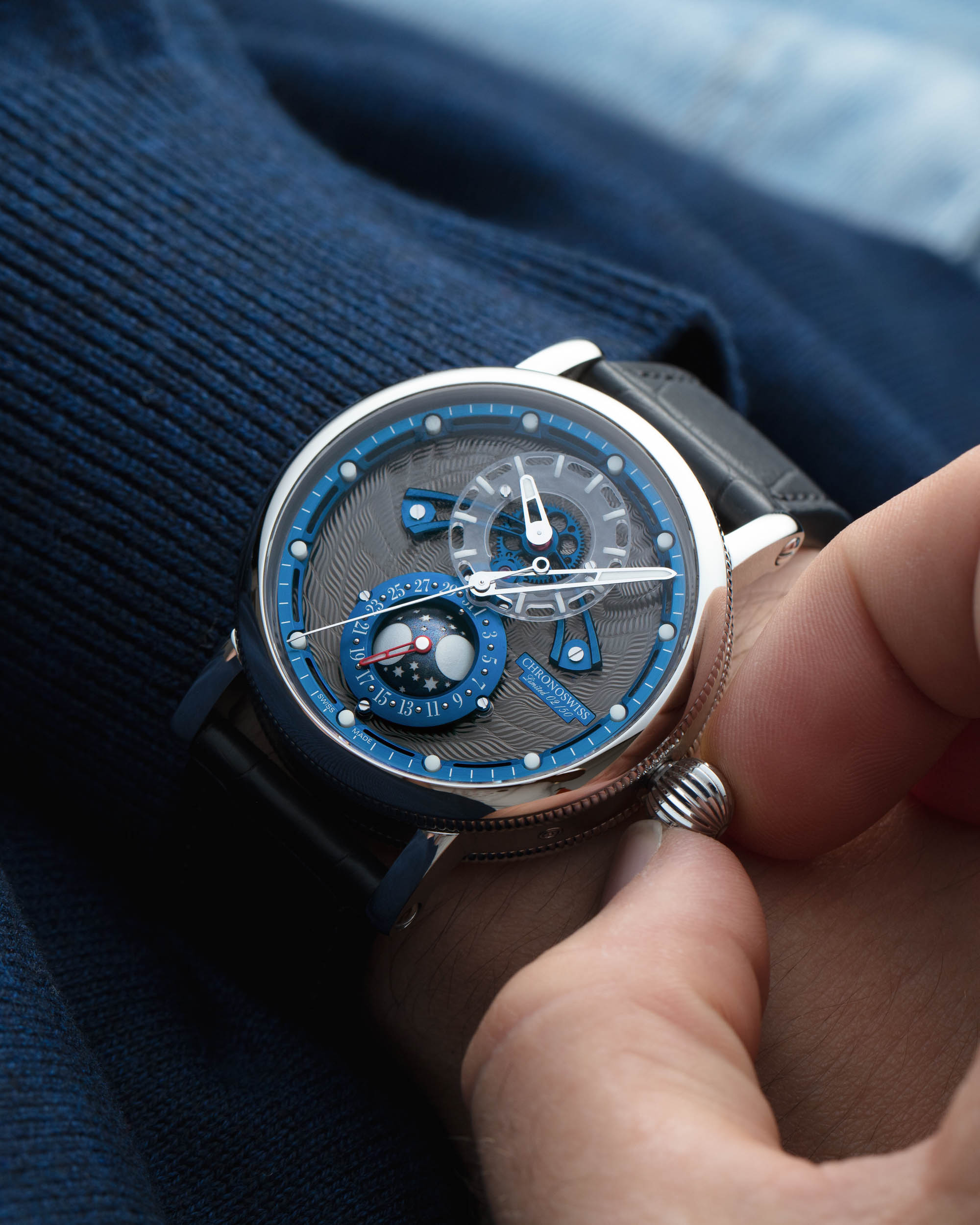 Both the Chronoswiss Space Timer Moonwalk and the Space Timer Jupiter will be produced as limited editions of 50 pieces worldwide, and both models will be accompanied by an official retail price of €16,600 EUR. Additionally, considering that the brand has explicitly said that “the first two planets of the interstellar journey of Chronoswiss are Moon and Jupiter,” you can guarantee that additional Space Timer models will be following in the near future with dials inspired by other planets in our solar system. Given that the various models from the Space Timer series are not being released all at one time, collectors won’t have a chance to simply pick their favorite, since the 50 examples of the current models will almost certainly be sold long before the next ones make their appearance. This marks a significant contrast to the “Pokemon” approach of the Omega MoonSwatch and its solar system-inspired lineup, where all of the examples were released at once, and buyers could simply pick their favorite or hunt down the remaining ones that they didn’t already own. For the Chronoswiss Space Timer series, those who wish to collect all of them will likely need to purchase the watches in real-time, or will otherwise be forced to hunt down one of a very small number on the secondary market. For more information, please visit the brand’s website.