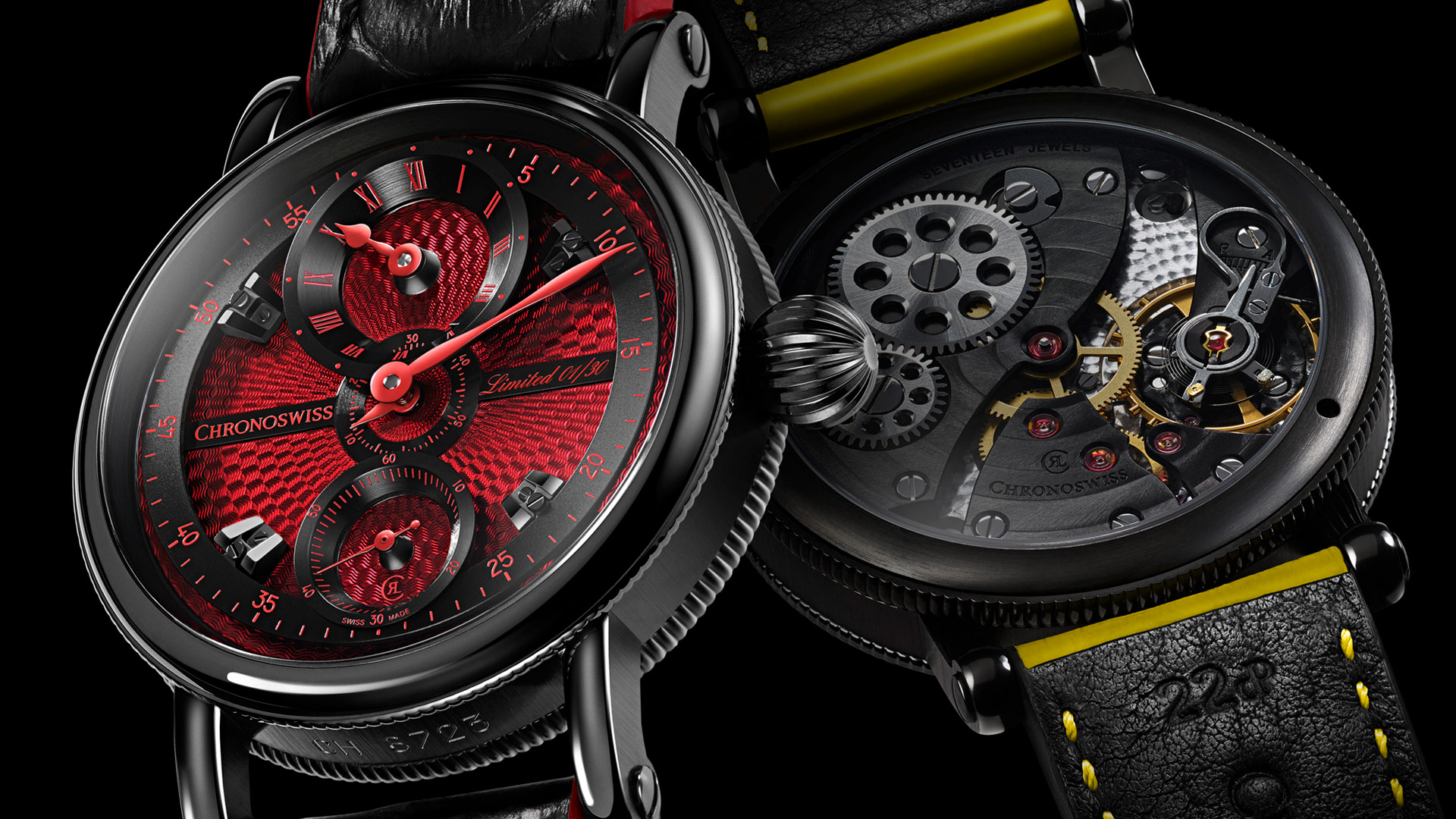 2017 marked a fantastic year for Only Watch, a Muscular Dystrophy charity that encourages watch brands to donate a unique model to be auctioned to benefit the research of the disease. Last auction, they were able to raise almost eleven million dollars to the cause, in no small part because of the brands’ graciousness in their donations. Among them, was Chronoswiss with what they called the Flying Regulator Red Passion – a new twist on the recently relaunched Flying Regulator model – utilizing a guilloche bright red dial and black DLC-coated case. The model was well received, exceeded its auction estimate by a large margin, and left enthusiasts wanting more. New for 2018, Chronoswiss is making the look more attainable and adding two new models to the collection – the red Flying Grand Regulator Limited 30 and a yellow Flying Grand Regulator Limited 15. The stainless steel case measures in at 44mm x 12.4mm. Chronoswiss, in general, has flirted with the line of dressy and sporty, and it’s one of the things I’ve admired about their case designs. For these two limited editions, they go all in on the sporty influences and I find that it works. First, the satin finished DLC coating brings a brooding look to both. I’ve always felt the fluted case edges felt dressier, but now seeing it coated in DLC, it works a lot better than I would have expected. The extended screwed lugs, and the oversized onion crown are reminiscent of a pilot’s watch but fit the watch just fine. My only gripe is that the low 30m of water resistance hardly makes this watch a contender for the sea, but maybe the race track? Overall, I feel that a lot of things that shouldn’t work, do – and that presents a bolder look to a collection that typically leans dressy, even if I can’t place where it would belong in the overall sport watch space. If there are two identifying factors of Chronoswiss, it would be regulators and guilloche – and these models handle both really well. Chronoswiss’ claim to fame is being the first serially produced wristwatch with a regulator style dial. That was in 1987. 20 years later, Chronoswiss updated the look of that collection with the Flying Grand Regulator and gave the watches a 3D look that is both striking and legible. These two new models with the splash of color were a perfect fit for what they were trying to accomplish. Both models feature a handsome guilloche dial plate with the next level up being the minute indexed chapter ring for the centrally placed minute hand. Above the chapter ring, you have the hour register under the 12 o’clock position, and the second register above the 6 o’clock position. The blacked-out yellow model provides some great contrast with the yellow hands, though in the case of the red model, I am perplexed by the decision to include the same color hands as the dial in the press images. A bit of google-sleuthing found that the handset is an almost salmon color and actually really legible. Both watches feature a break from 9 to 3 o’ clock that features the “Chronoswiss” brand name, and the limited-edition number. On the backside, you’ll find the hand wound Chronoswiss Calibre C.678 visible through the sapphire caseback. While Chronoswiss doesn’t readily say which base caliber they are using, it would make sense that it’s a Unitas movement that’s been heavily modified by the brand, since that’s what has been used in past models. Chronoswiss developed its own in-house regulation system utilizing a swan neck regulator – allowing for finer adjustments to the watches’ regulation. Fitting for a watch aptly named the Grand Regulator. Additionally, the movement features a stop second mechanism where a slide will lock the seconds hands when the wearer pulls the crown – a functional addition for the more anal retentive enthusiast. The decoration is well done with the black main plate featuring circular Geneva striping, many visible jewels, and a nice bit of perlage. The brushed or sandblasted gears give a more industrial look to the mechanism, and I find it reallyattractive. The decoration fits the overall look and feel of the watch, and when paired with the overall aesthetic, there’s something intricate to look at no matter the side. The watch beats at 2.5Hz and features a power reserve of approximately 45 hours. Tying the look together, the Flying Grand Regulator utilizes a “Hornback” alligator leather strap. This means that down the middle is a horn (or some call “scaled”) piece of the leather that protrudes out slightly and is a bit more brooding than what you would expect from a typical alligator strap. Personally, I didn’t think I would like it as much as I do. When paired with the contrasting cross stitching and colored belly, both are unique and fit the watch well.