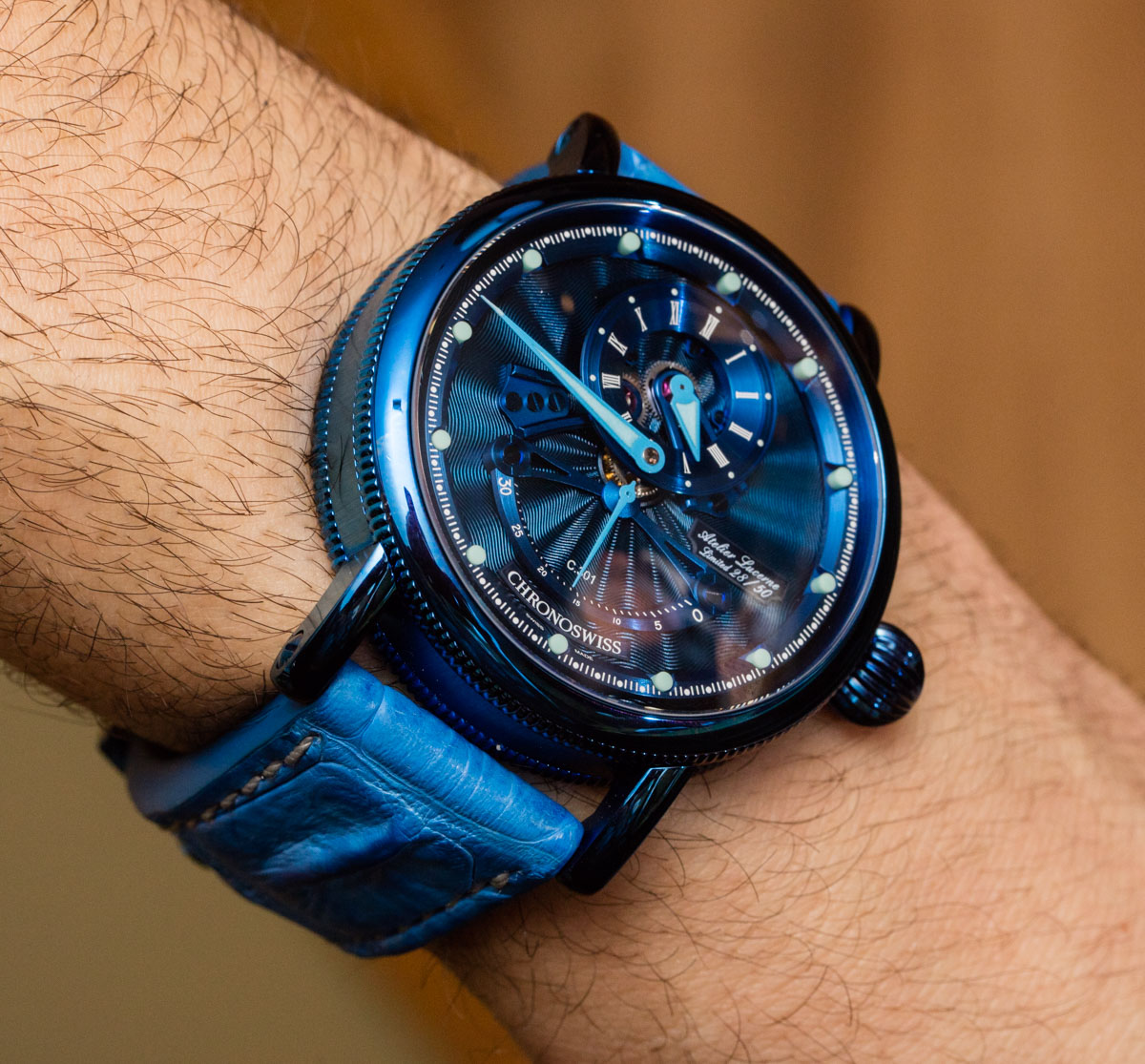 Moments into the aBlogtoWatch meeting with Chronoswiss at Baselworld 2019, I knew what my favorite new watch from the brand was. I was particularly enthused by this “Blue Note” (as I called it) Chronoswiss Flying Grand Regulator Open Gear ReSec watch, which is limited to just 50 pieces. Blue is a popular color right now, and this watch is literally covered with it.

It can be a bit challenging to sort through the many slightly different Chronoswiss regulator models. At times, I can easily confuse two models. For example, can you immediately tell the difference between this Grand Regulator Open Gear ReSec and the Chronoswiss Flying Regulator Open Gear (reviewed on aBlogtoWatch here)? The short answer: the use of a retrograde seconds indicator for the ReSec model, as opposed to the traditional seconds dial for the other watch. So, when selecting a Chronoswiss watch, it pays to choose carefully. 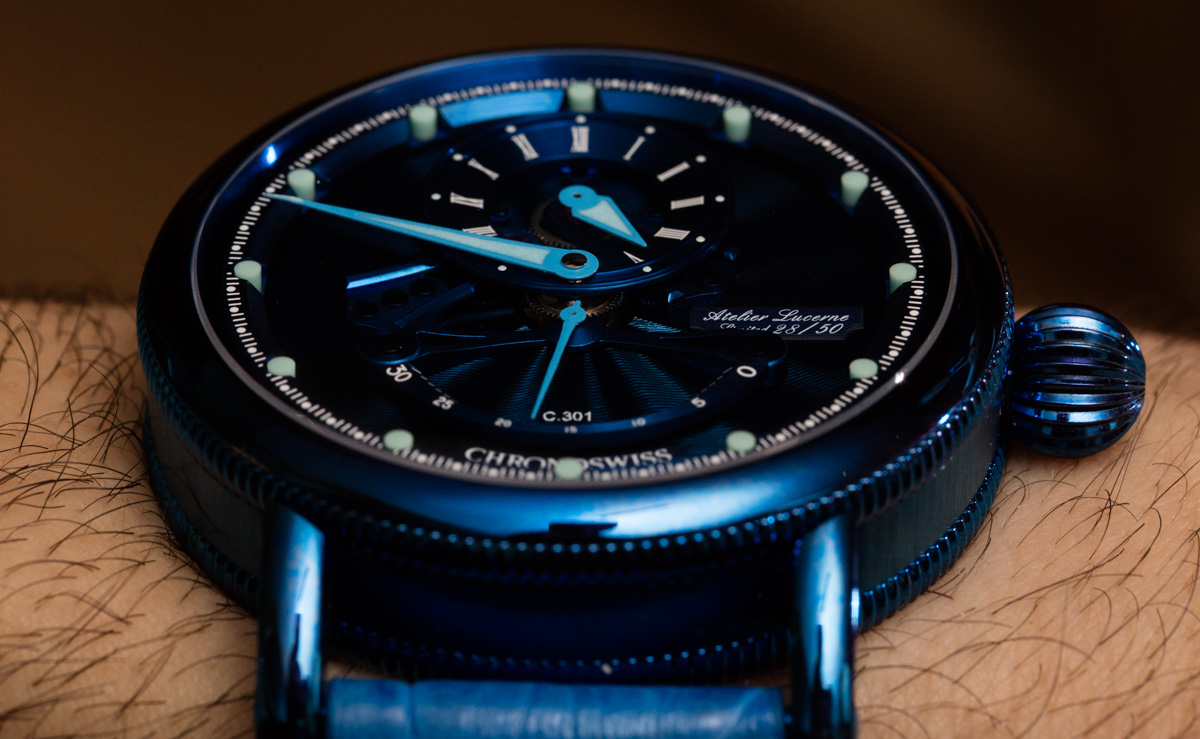 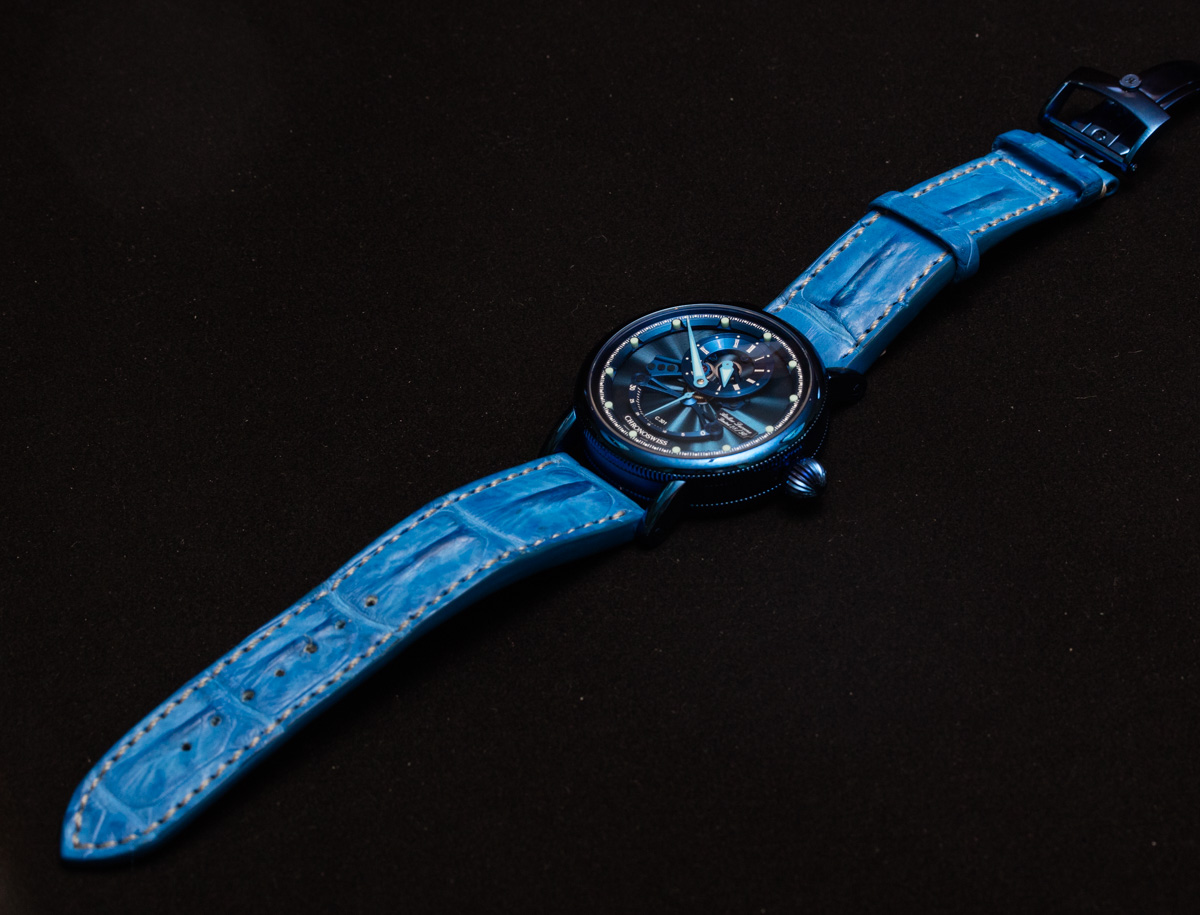 As I mentioned above, “ReSec” is Chronoswiss’ short way of saying “retrograde seconds.” Sometimes you might see this watch with its (deep breath) longer full name, which is “Chronoswiss Flying Grand Regulator Open Gear Retrograde Seconds.” Now you know why I told Chronoswiss, “Just call this particular model the Blue Note.” Doesn’t that sound better? The blue itself is striking, and on the case, it comes in the form of blue DLC-coating over the base steel layer. Chronoswiss pairs the case with a blue Hornback crocodile strap, as well as a blue dial with blue hands. This might be the bluest watch of the year!

Chronoswiss was careful to ensure high levels of legibility on the complicated dial that seems to throw in so many little details. Regulators at their core are all about precision-reading, but the concept often needs to be “sexed up” a bit in order to make for an attractive watch dial. Chronoswiss knows that the “regulator” is sort of their “thing,” so we have experienced a dial that attempts to build on the core concept as much as possible. This is not only represented in the rich three-dimensional look of the dial but also in the “Open Gear” look at part of the movement under the 12 o’clock position, as well as the retrograde seconds hand. One of my favorite dial details are the “columns” of solid luminous material (as opposed to paint), which act as five-minute indicator points. (If this were not a regulator, then they would be the hour markers, of course.) 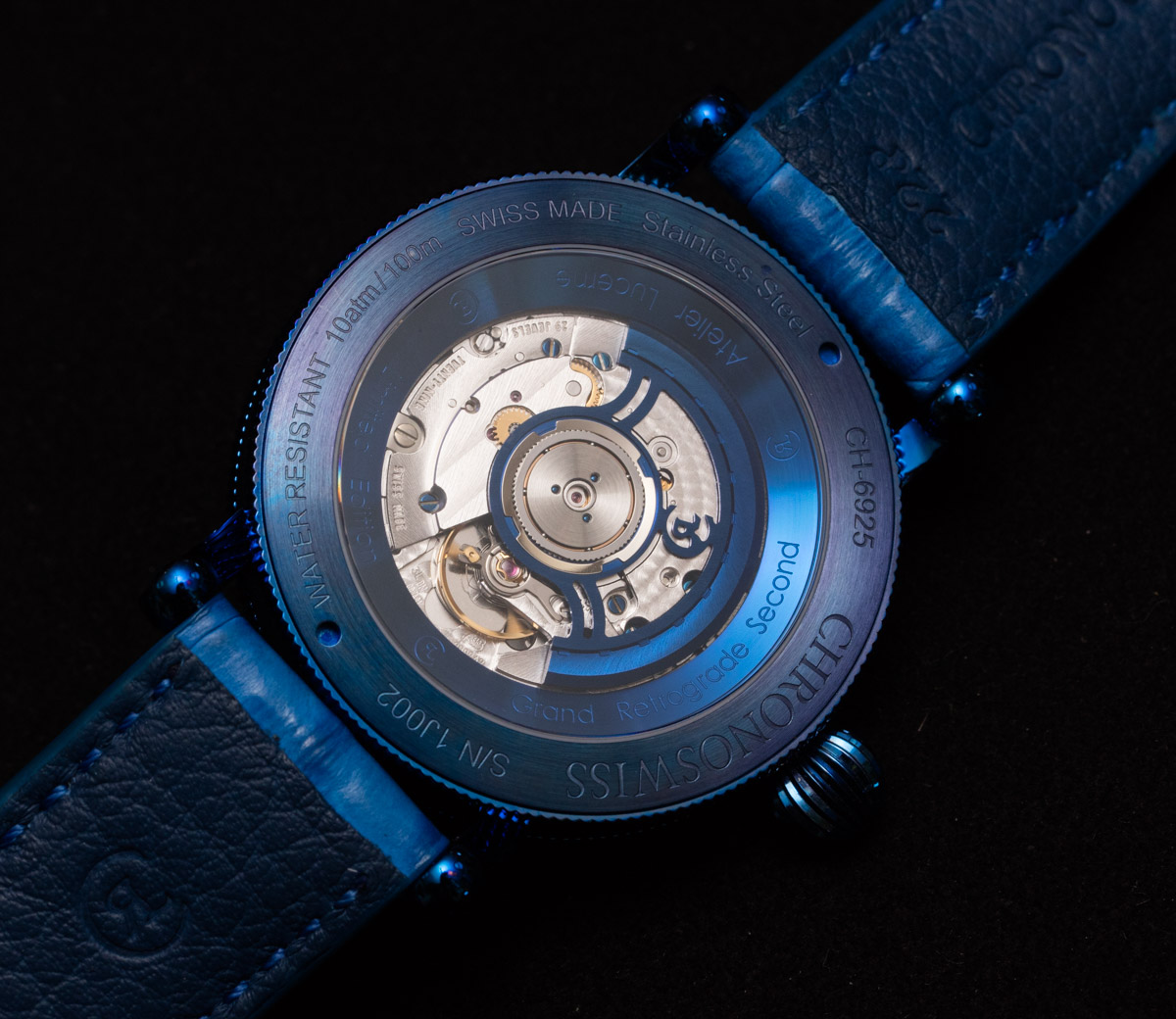 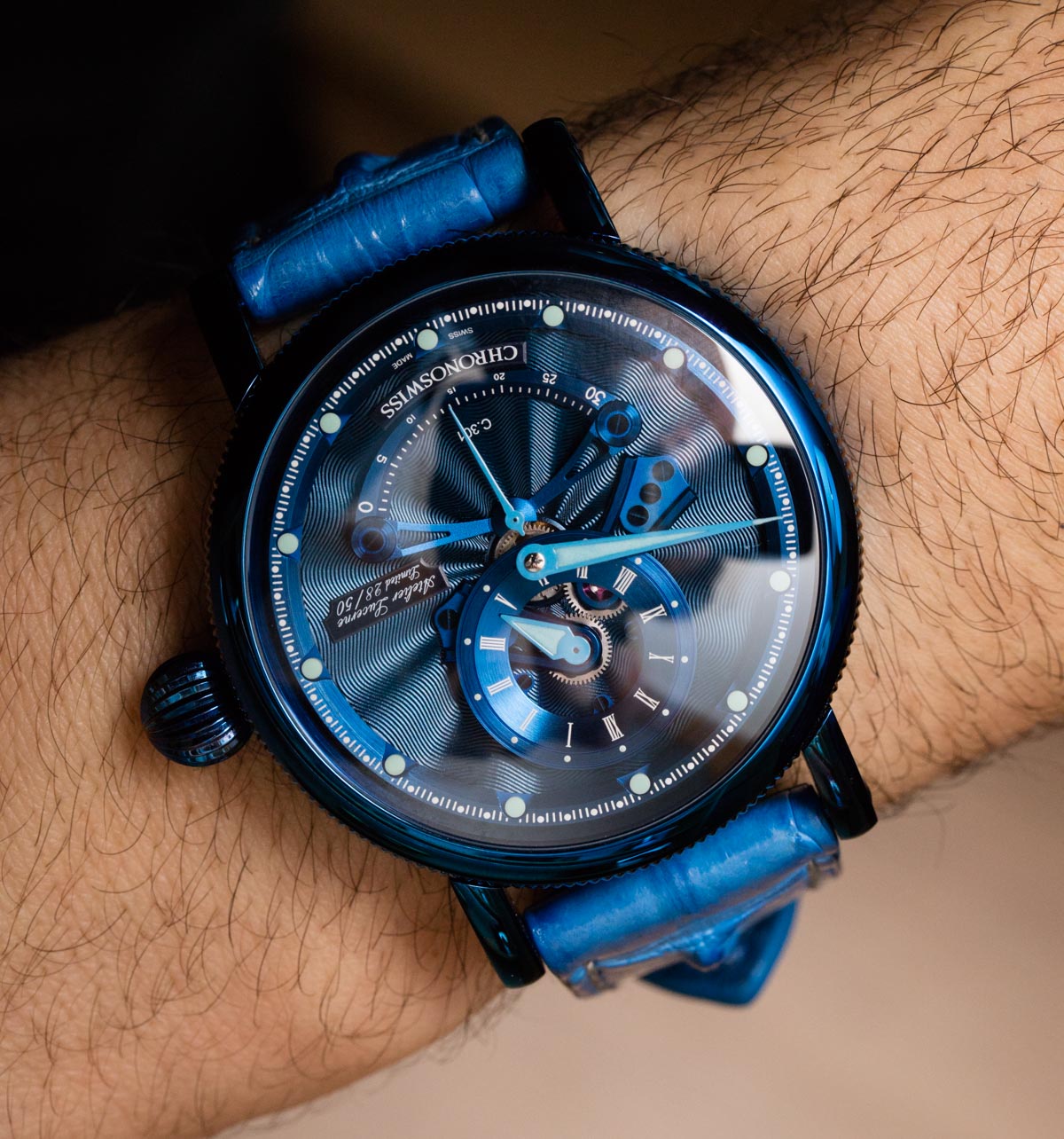 The Flying Grand Regulator Open Gear ReSec is a watch lover’s collectible lifestyle item that combines a functional spirit with a lot of visual pizazz. With its striking blue design, 44mm-wide (and 13.35mm-thick) case, and multiple levels of decorative elements placed on the dial, such a watch is, in many instances, the polar opposite of a petite vintage sport watch — which is ironic, in a sense, because, underneath the blue and tricked-out dial, the Flying Grand Regulator Open Gear ReSec does look like a large vintage pilot watch in regard to the case and crown.

Inside the watch is the caliber C.301 automatic, which begins life as an ETA 2892-A2 and has a Chronoswiss patented module on it for the regulator-style time display and the retrograde seconds indicator. You can view the 4Hz, roughly 42-hour power reserve movement through the year of the case… and, of course, it has a matching blue-coated automatic rotor. The 44mm-wide Flying Grand Regulator Open Gear ReSec case itself is comfortable (assuming your wrist can pull off the longish lugs) and water resistant to 100 meters. 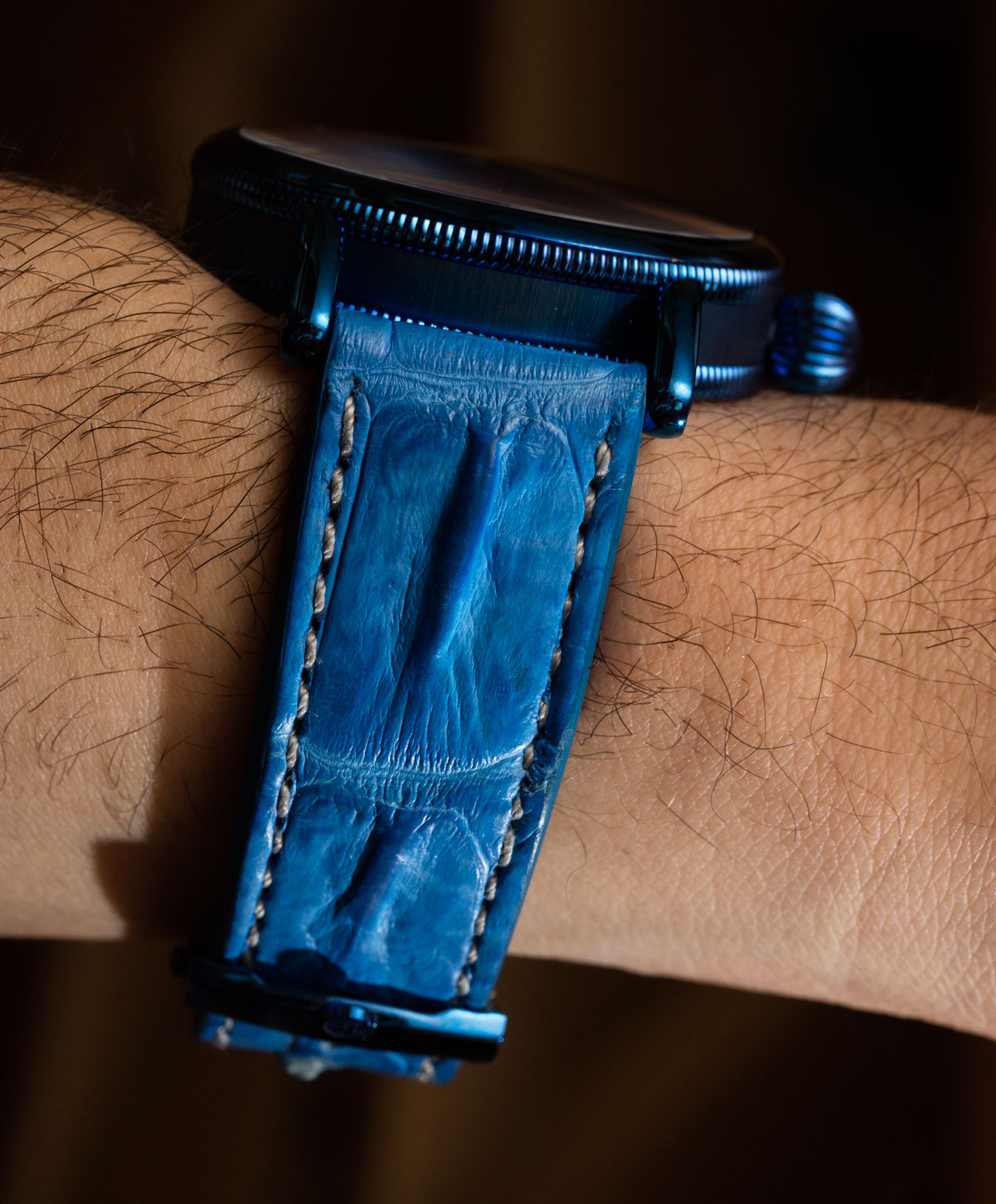 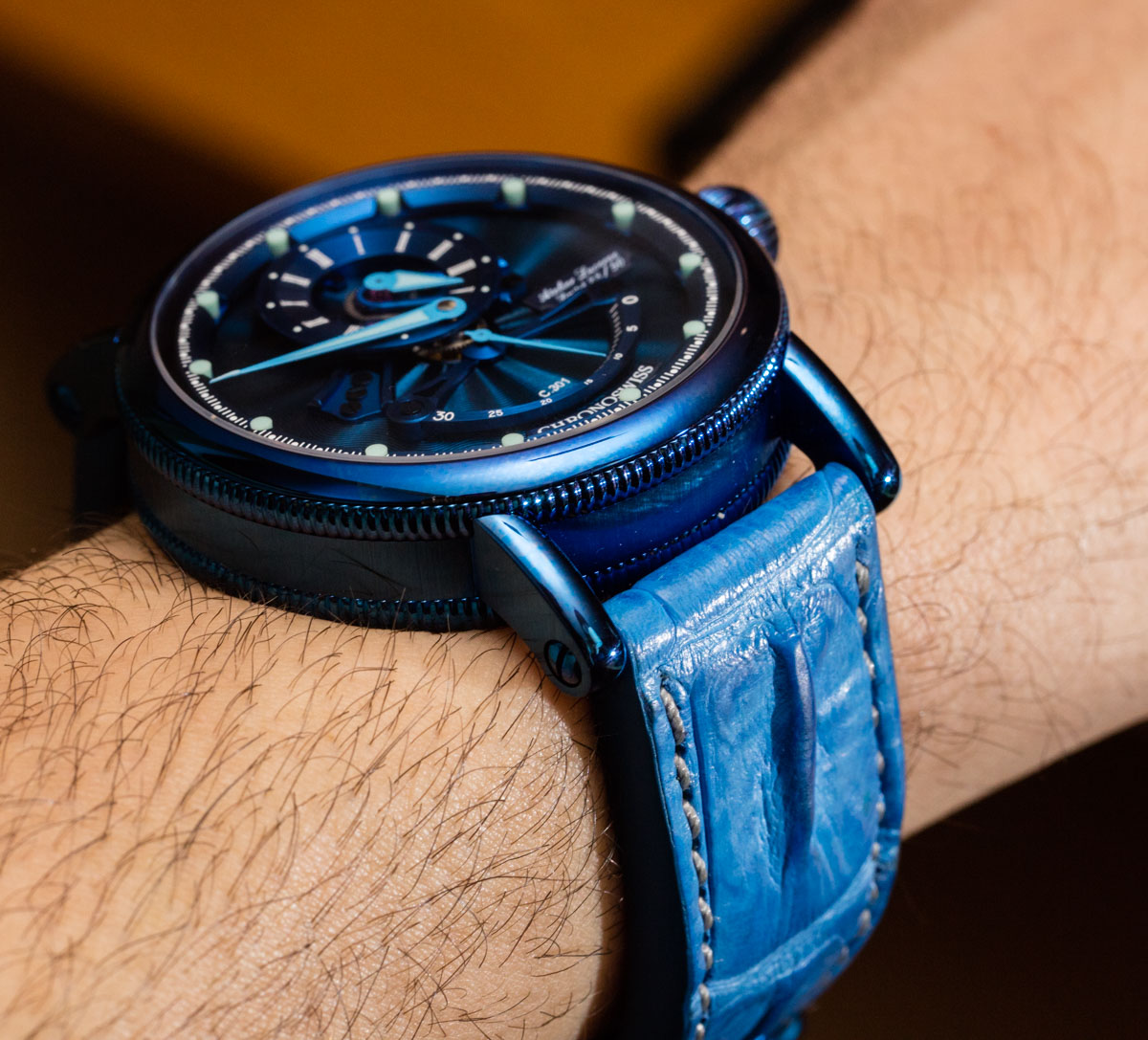 Another important feature of value in the Blue Note watch is the fact that the dial has been hand-guilloché-engraved (as opposed to machine-stamped), which adds further human effort (and thus inherent value) to this product. People will, however, wear the Blue Note and its four sister watches in the current Flying Grand Regulator Open Gear ReSec because they are fun — which is particularly well expressed in this ref. CH-6926-BLBL. Price for this limited edition (of 50 pieces) in blue is actually the same as the price for the other steel-cased limited-edition Chronoswiss Flying Grand Regulator Open Gear ReSec watches and is 9,900 Swiss Francs. Learn more at the Chronoswiss website here.