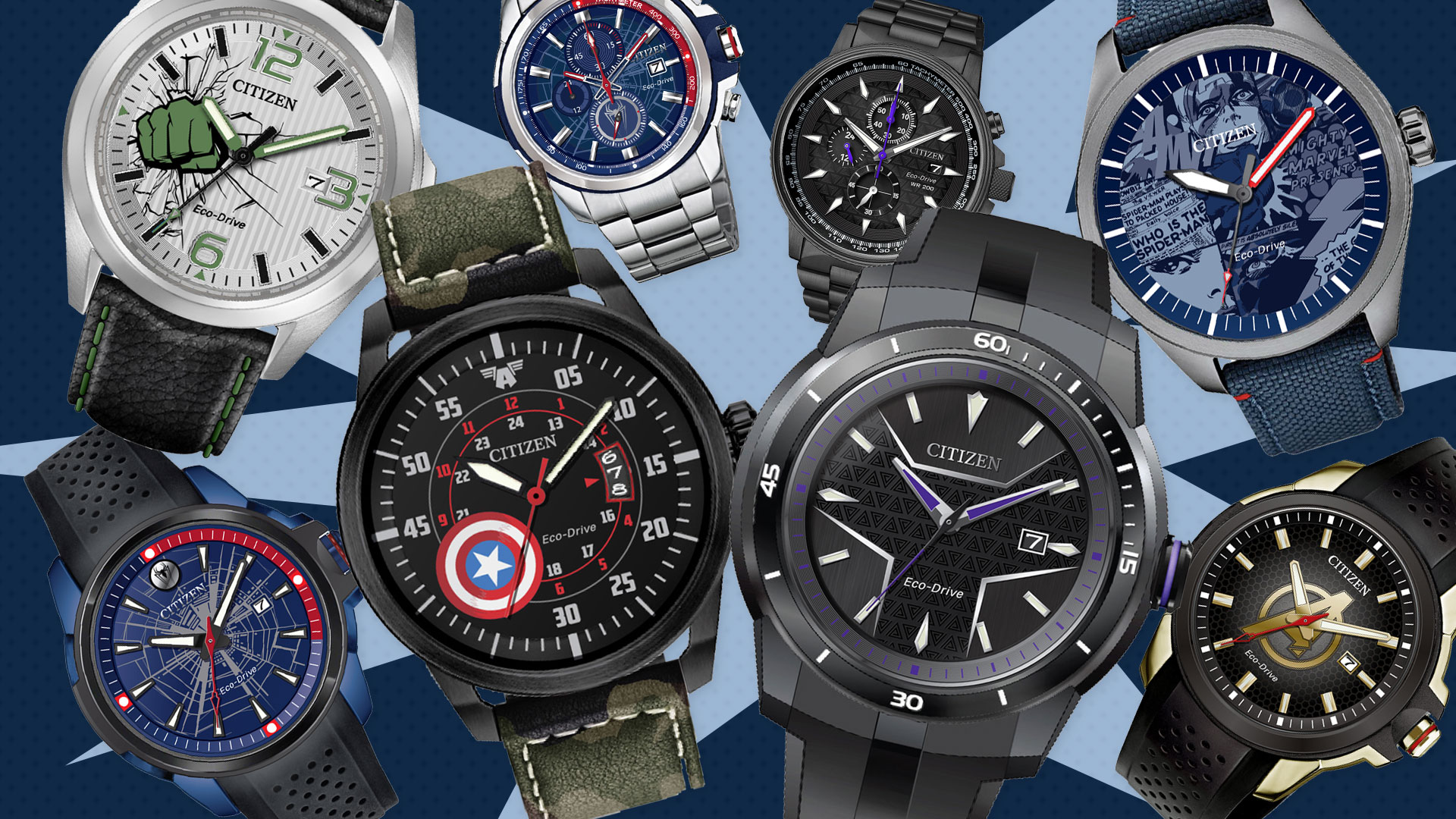 This month, Citizen unveiled an interesting new Marvel-themed collection at New York’s Comic-Con event. These Citizen Eco-Drive Marvel Avengers watches center around select members of Marvel’s Avengers including Black Panther, Spiderman, Captain America, and the Hulk. Additionally, Citizen released a watch featuring the vintage panel artwork of classic Marvel comics as well as a watch that is broadly Avengers-themed and focuses on the unity of the heroes as a whole displaying a large Avengers “A” in the middle of the dial. 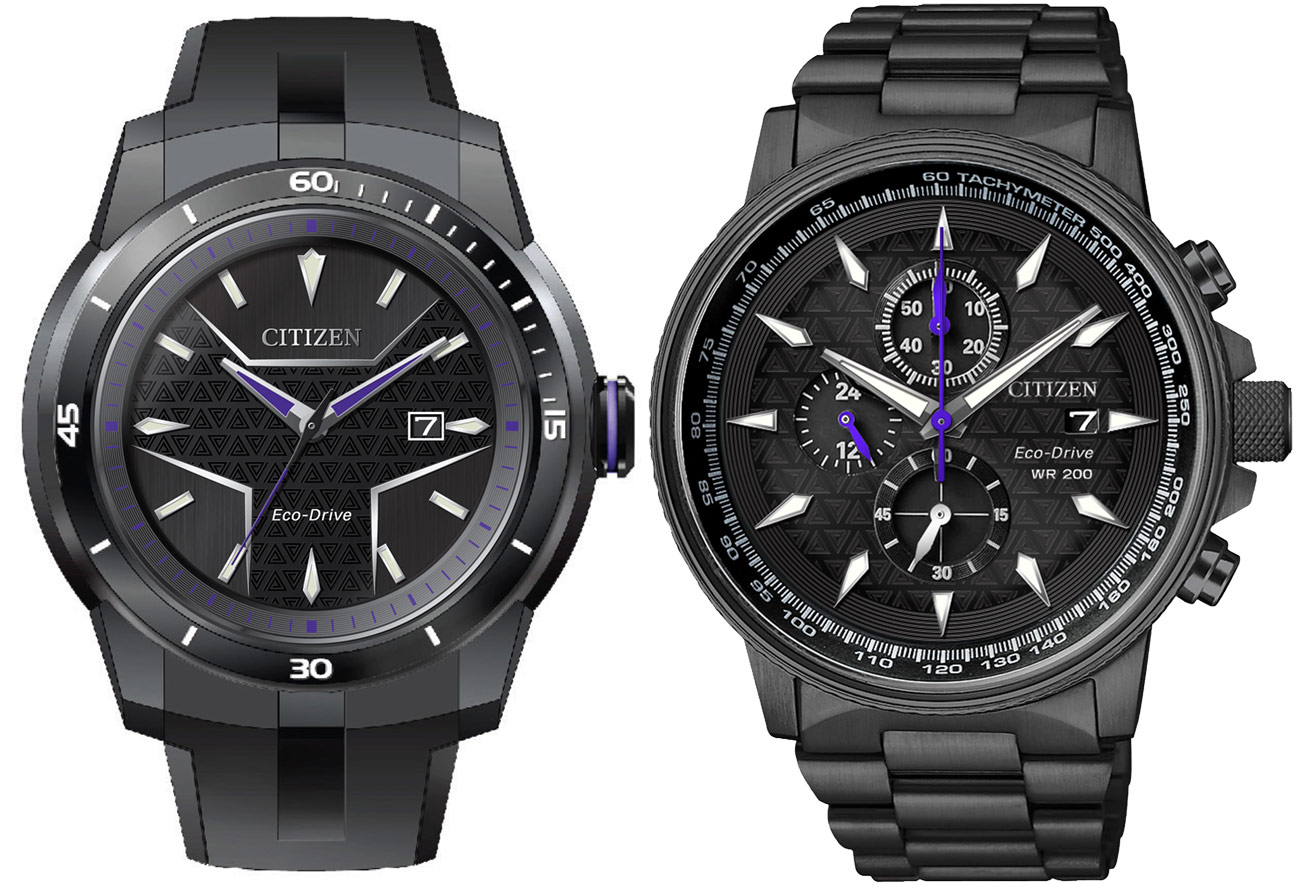 The two Black Panther-themed Citizen Eco-Drive Marvel Avengers watches feature a Wakandian-style tribal pattern on the dials and hands/indices modeled after Black Panther’s T’Challa’s necklace that featured prominently in the movie. Both watches are highlighted with violet accents, again as a call back to Black Panther’s power to absorb kinetic energy and release it back at his enemies in the form of a violet wave. The chronograph is available on a black steel bracelet and the time-only version comes on a black/violet accented rubber strap – both watches feature black coated cases. 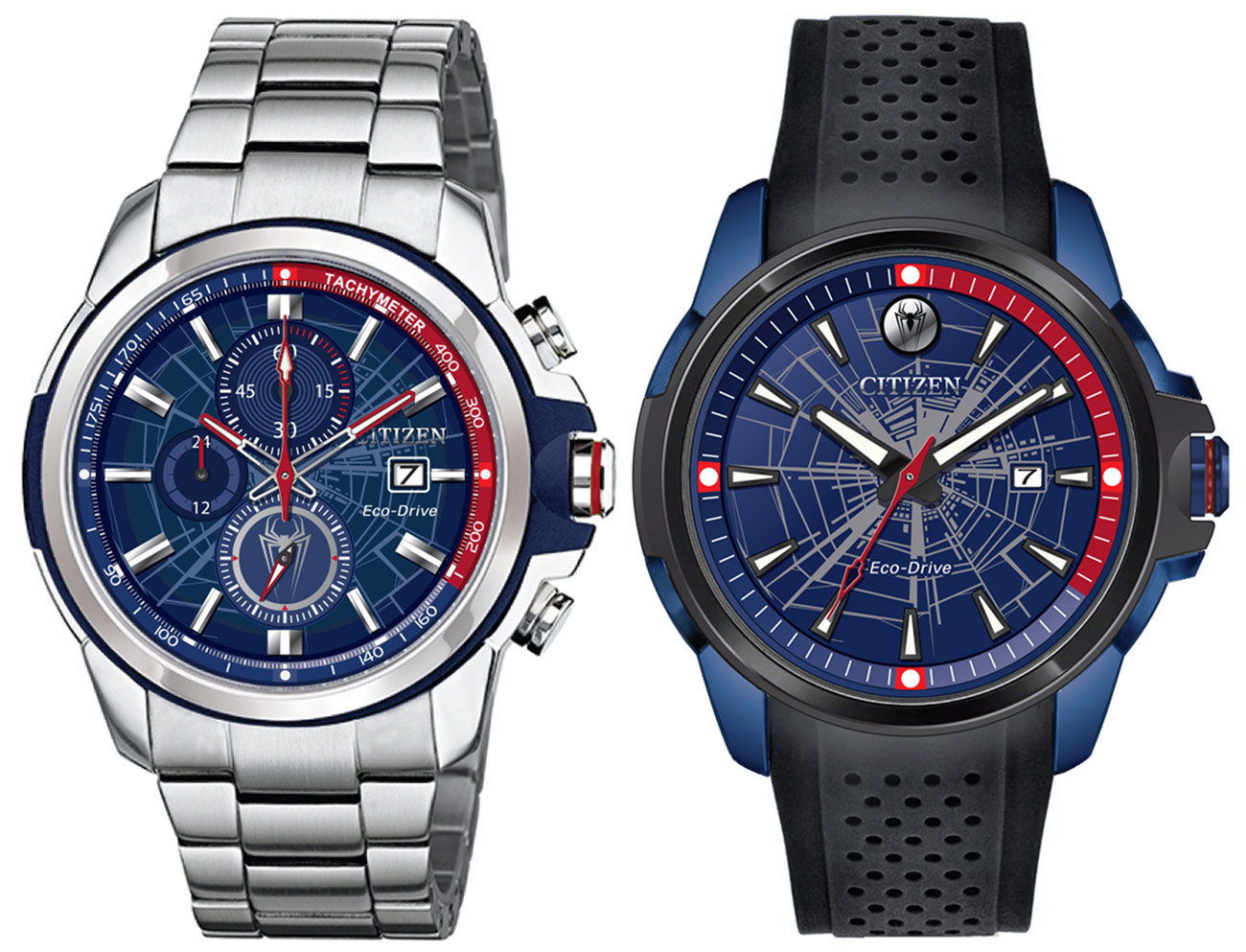 The two Citizen Eco-Drive Spiderman watches prominently feature Spiderman’s red and blue color scheme across the dial and chapter ring/tachymeter. As a further reference to the superhero, Citizen has printed a complex web pattern across the dials of both watches as well as the Spiderman logo in the subdial of the chronograph and in place of the 12-hour index of the time/date model. That chronograph version is available in steel with a steel bracelet, whereas the other is shown with a black rubber strap and blue/black accented case. 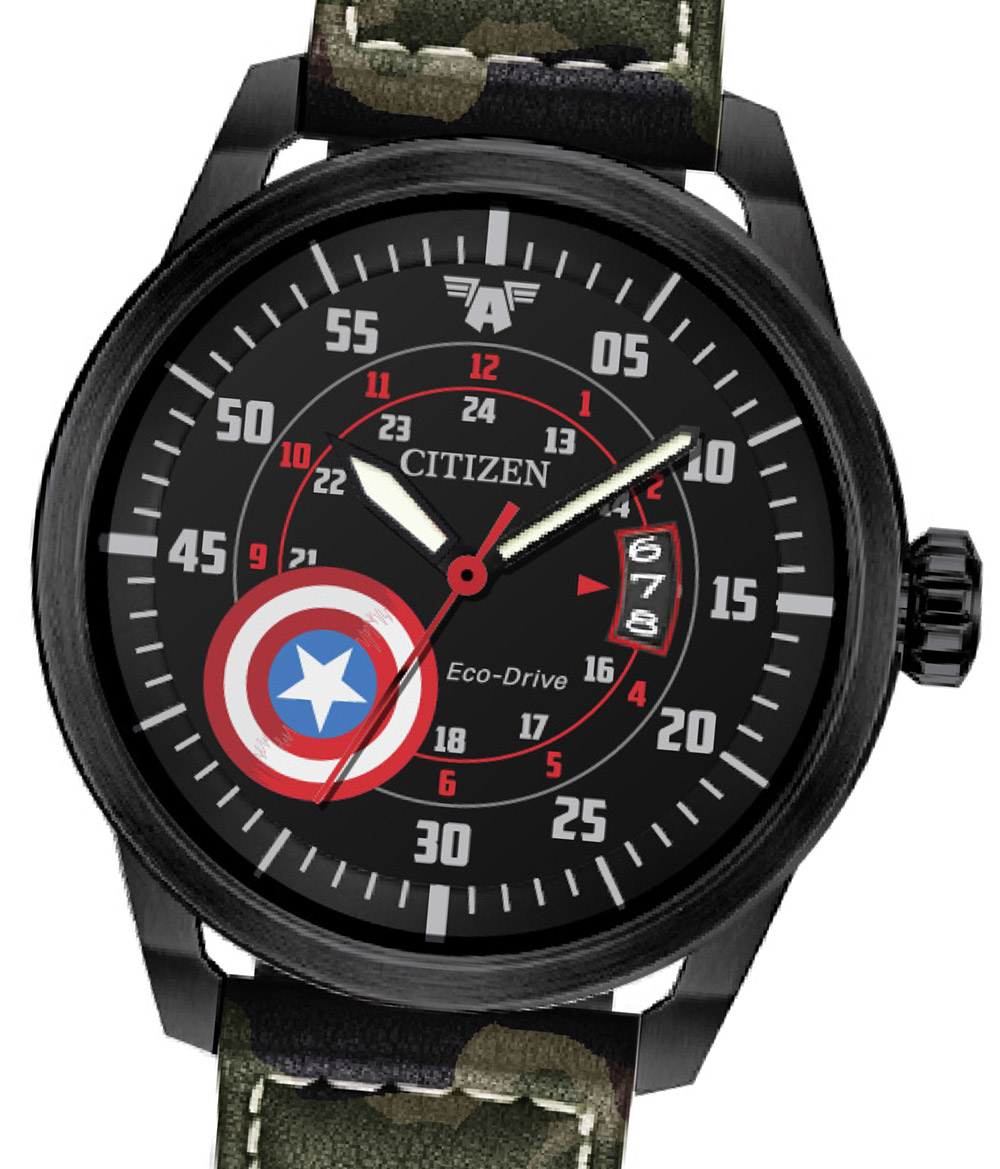 Captain America’s watch features the Captain’s red, white, and blue star logo in the lower left quarter of the watch, with the “00” indices redesigned to mirror the captain’s helmet, an A with wings. As a nod to Captain America’s history during WWII, the watch features a 24-hour inner track on the dial to make reading the time in “military time” easier. This particular watch comes on a camouflage strap. 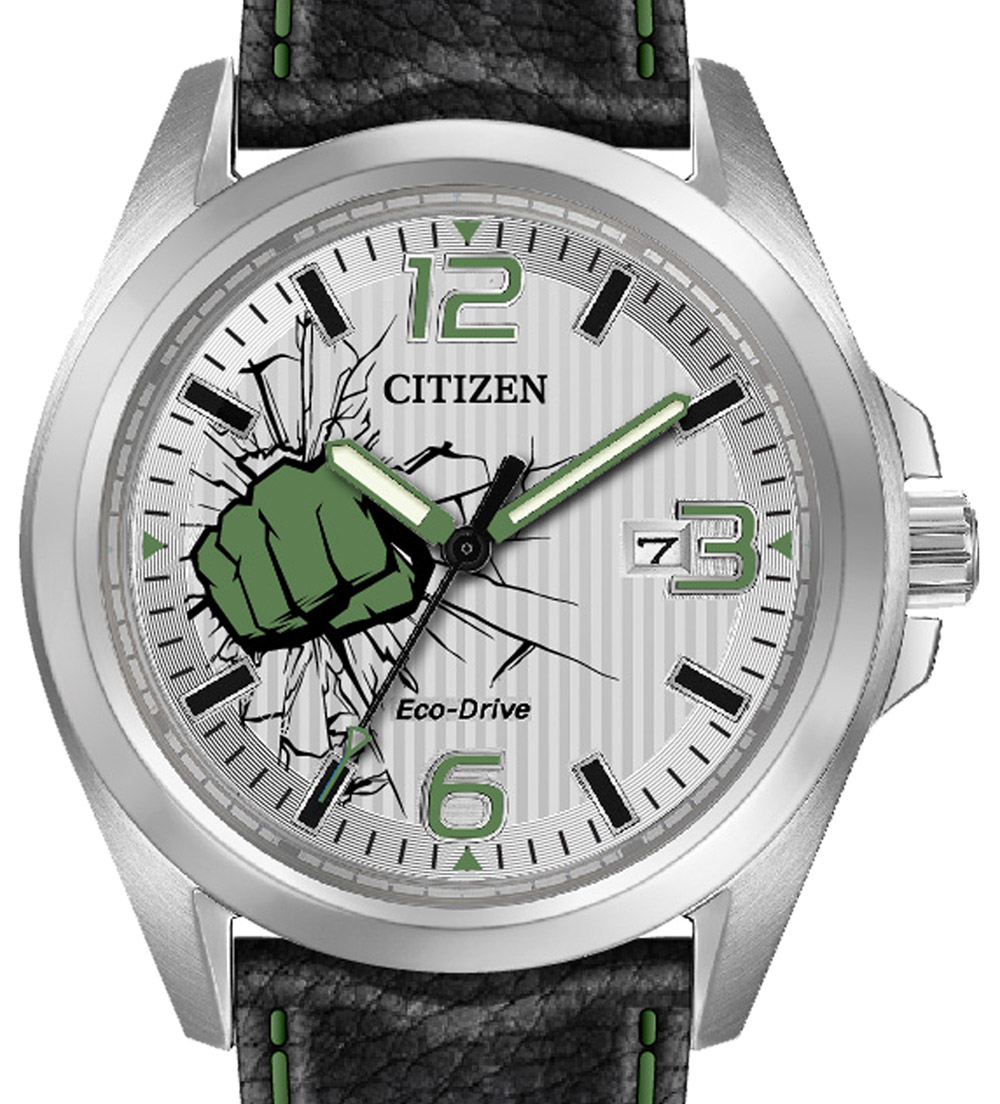 Finally, Hulk’s watch is exactly what you’d expect from a hero whose catchphrase is simply “smash!” A silver dialed watch with vertical striping, prominently featuring a green fist busting through the dial where an Arabic 9 should be. The surviving Arabic numerals are filled with Hulk’s signature green. This watch ships on a heavy buffalo grain strap. 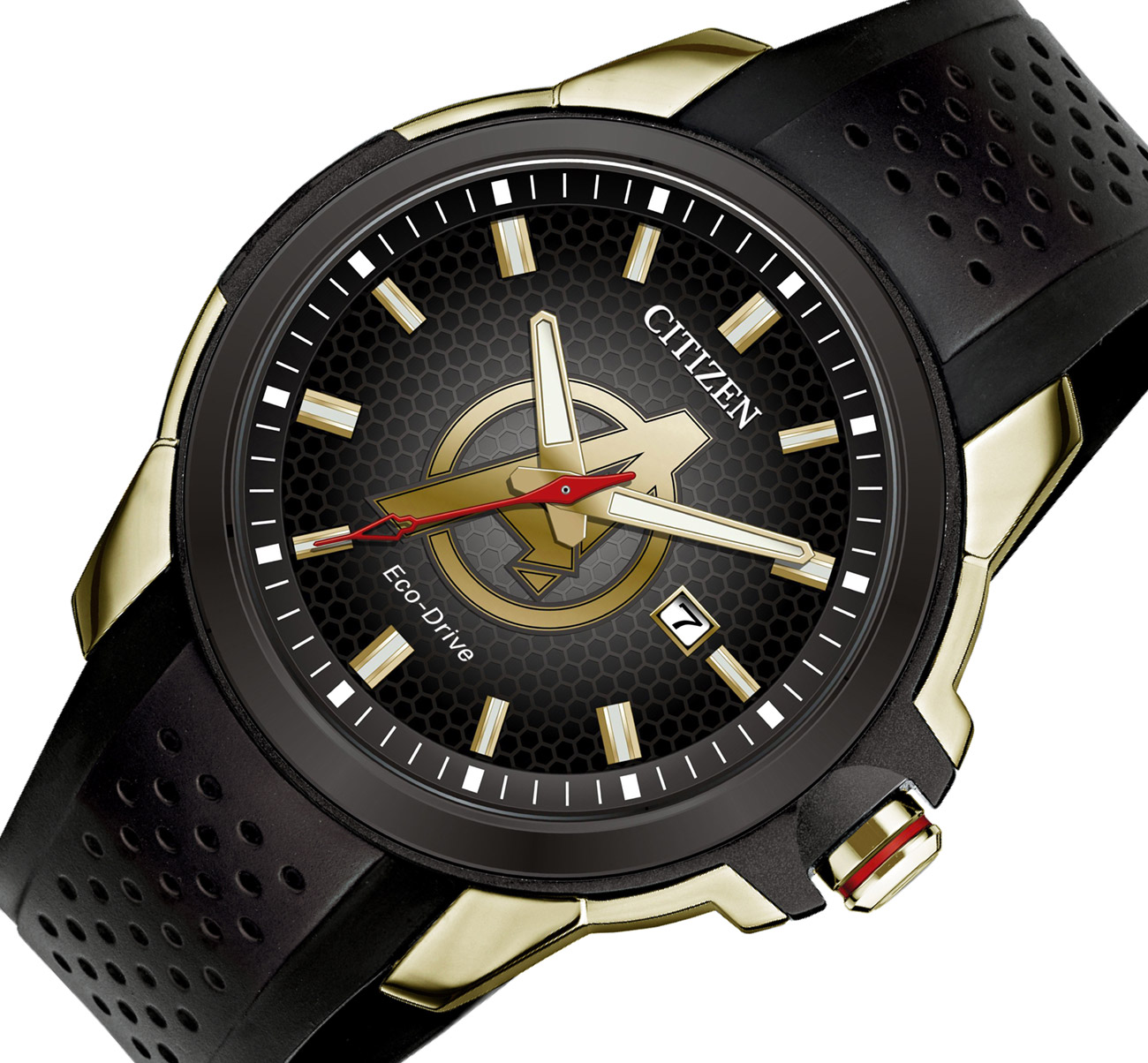 At the end of it all, I think it’s pretty fun that Citizen would partner with a brand like Marvel and make a series like this. I am trying not to take it personally that they ignored my favorite Avenger, Ironman, but maybe there’s something in the future for him. While I prefer to see something completely new, it was an easy move for them to redesign existing watches with these themed colorways and motifs. The Spiderman Chronograph appears to be a redesigned CA0349 style chronograph, for example, and the Captain America is likely a redone AW1360. 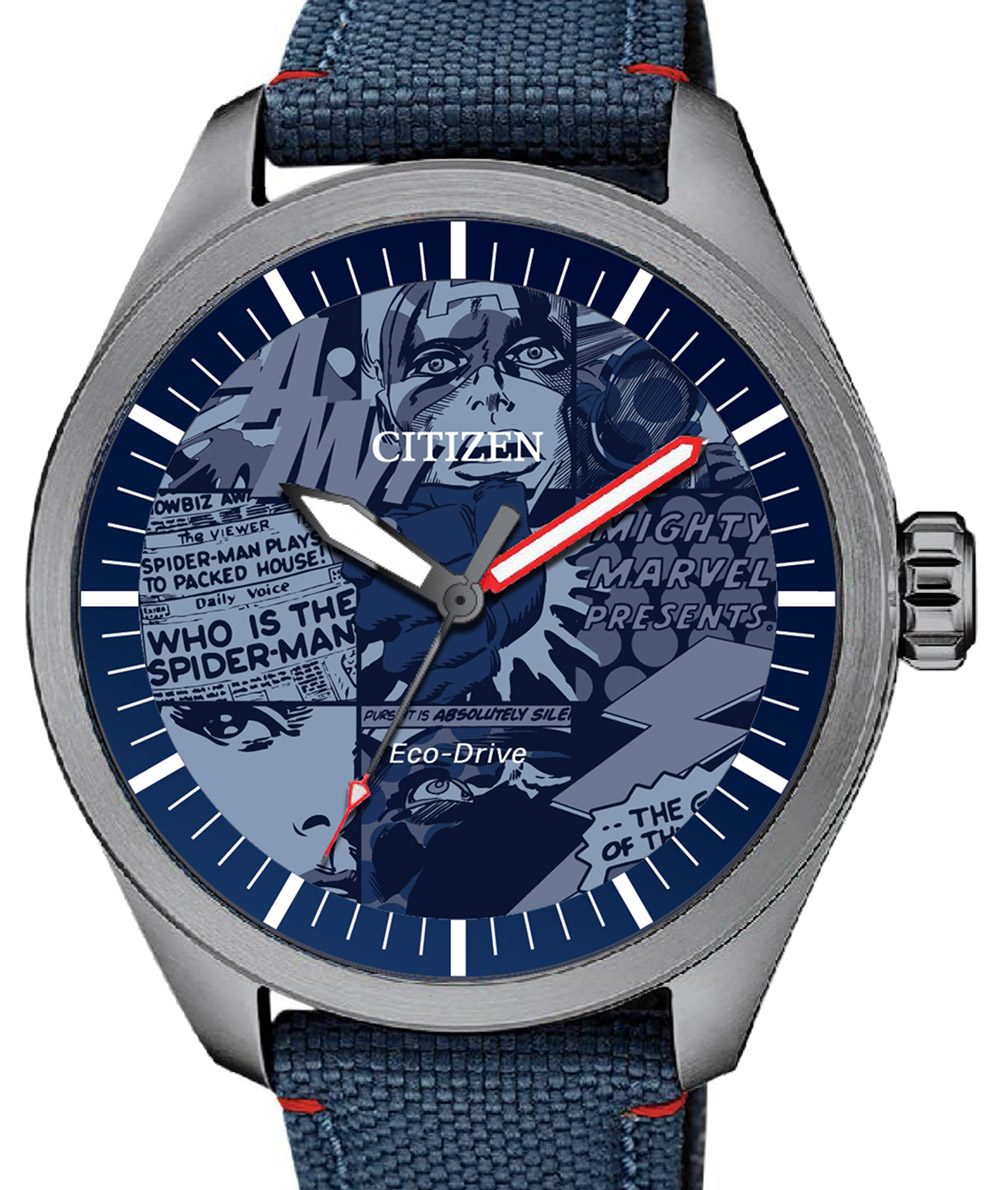 With that said, my pick of the lot as a favorite would be the watch that features vintage panel artwork on the dial. I feel that it’s the truest to a classic comic book fan’s watch, and I have always been an appreciator of vintage Marvel artwork. Each watch in the Citizen Eco-Drive Marvel Avengers collection features Citizen’s light-powered Eco-Drive technology, and Citizen states that prices across the collection will be in the $275–$625 range. For more information visit citizenwatch.com.