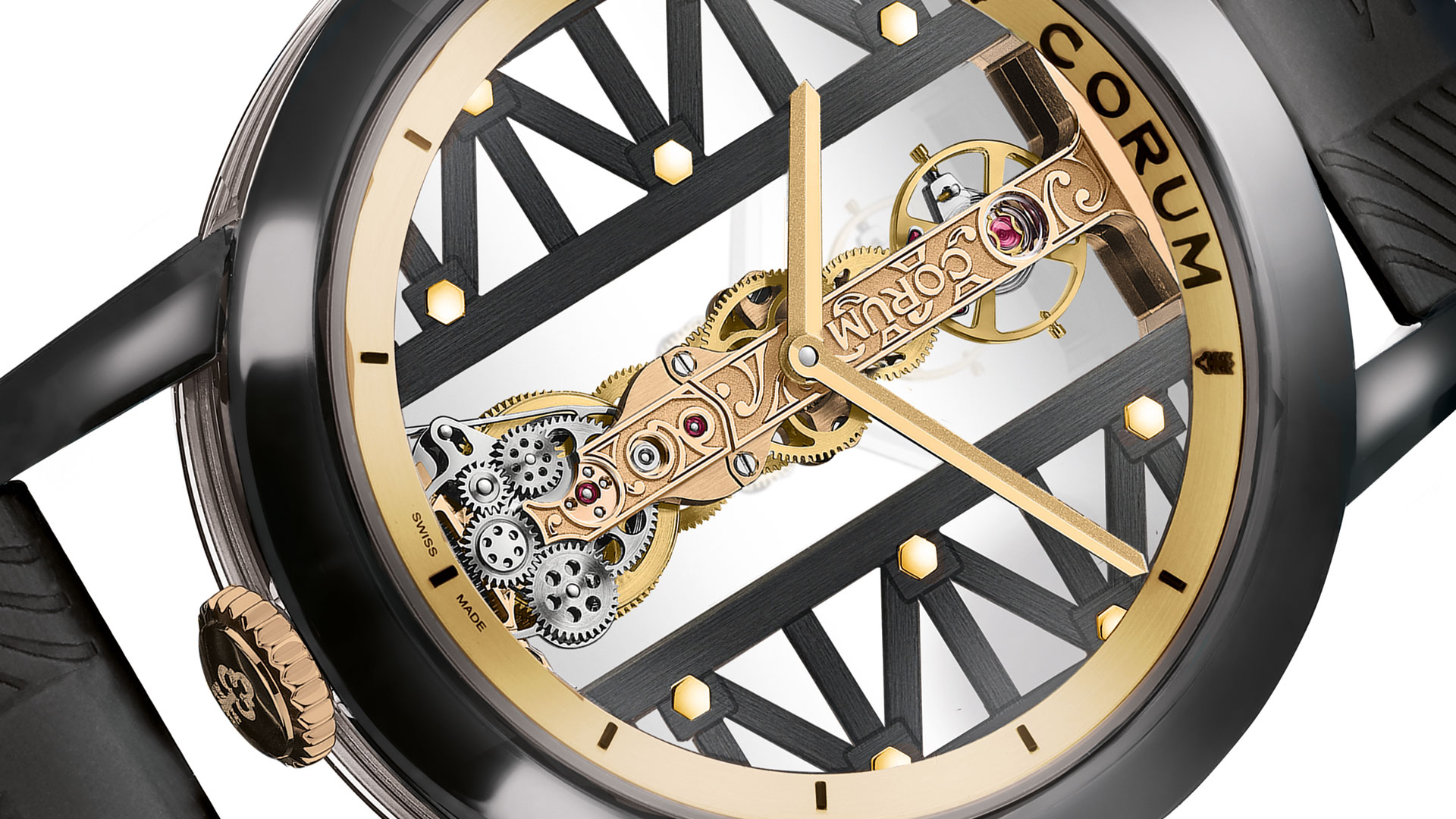 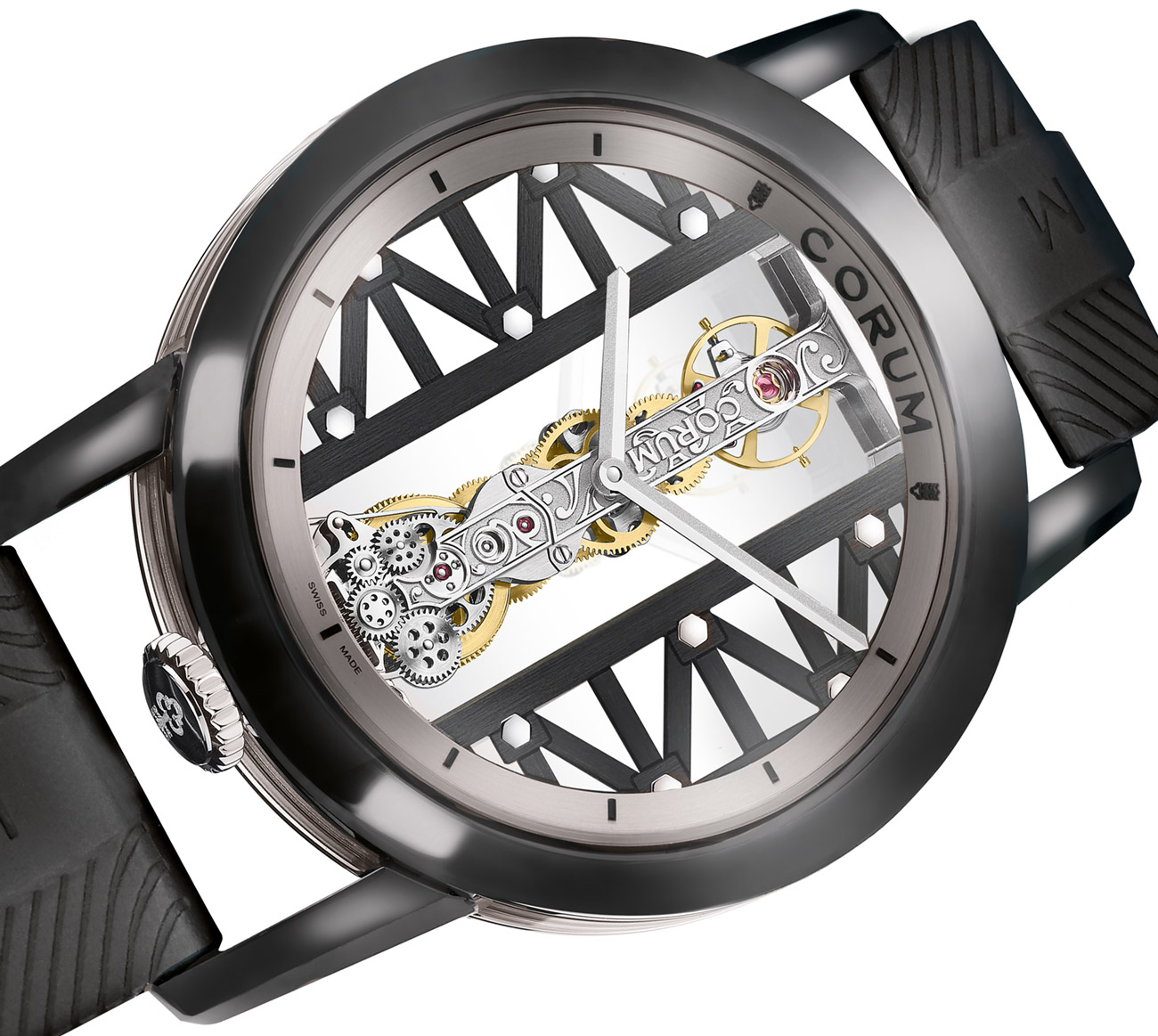 At first glance, the Corum Golden Bridge Titane DLC can be a little difficult to wrap your mind around. This is the evolution of Corum’s Golden Bridge with its “linear” movement that first finally came in a more traditional round case that we saw hands-on here. With its suspension bridge-like “struts” flanking the movement on either side, this new version has a rich black DLC finish applied to the titanium case. Meant to reference the Golden Gate Bridge or Brooklyn Bridge, you can easily see the correlation in the design. 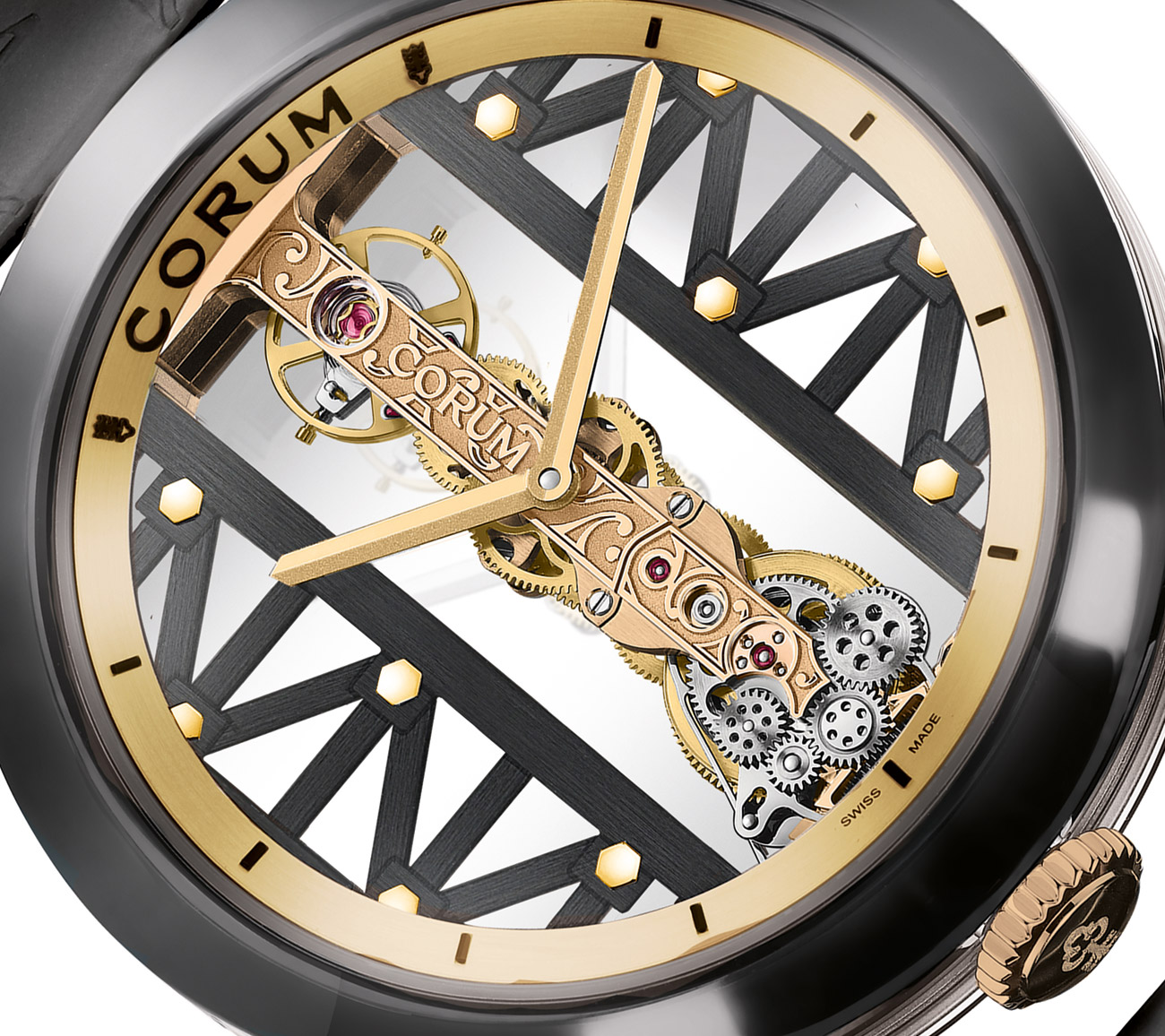 Corum has unveiled two versions on this occasion, one in white gold (B113/03832) and the other in pink gold (B113/03831). You can see this difference primarily on the movement itself where the bridges and screws are fashioned in each metal, along with the hands and rehaut. The linear, or as Corum calls it “baguette,” movement is what helps set these watches apart from their peers. The hand-wound Corum CO 113 movement, operating at 4Hz with a power reserve of 40 hours, is arranged in a straight line running from noon to 6 o’clock. The 43mm-wide case (30m water-resistant) is sandwiched between two sapphire crystals offering you an extensive view of the entirety of the movement. 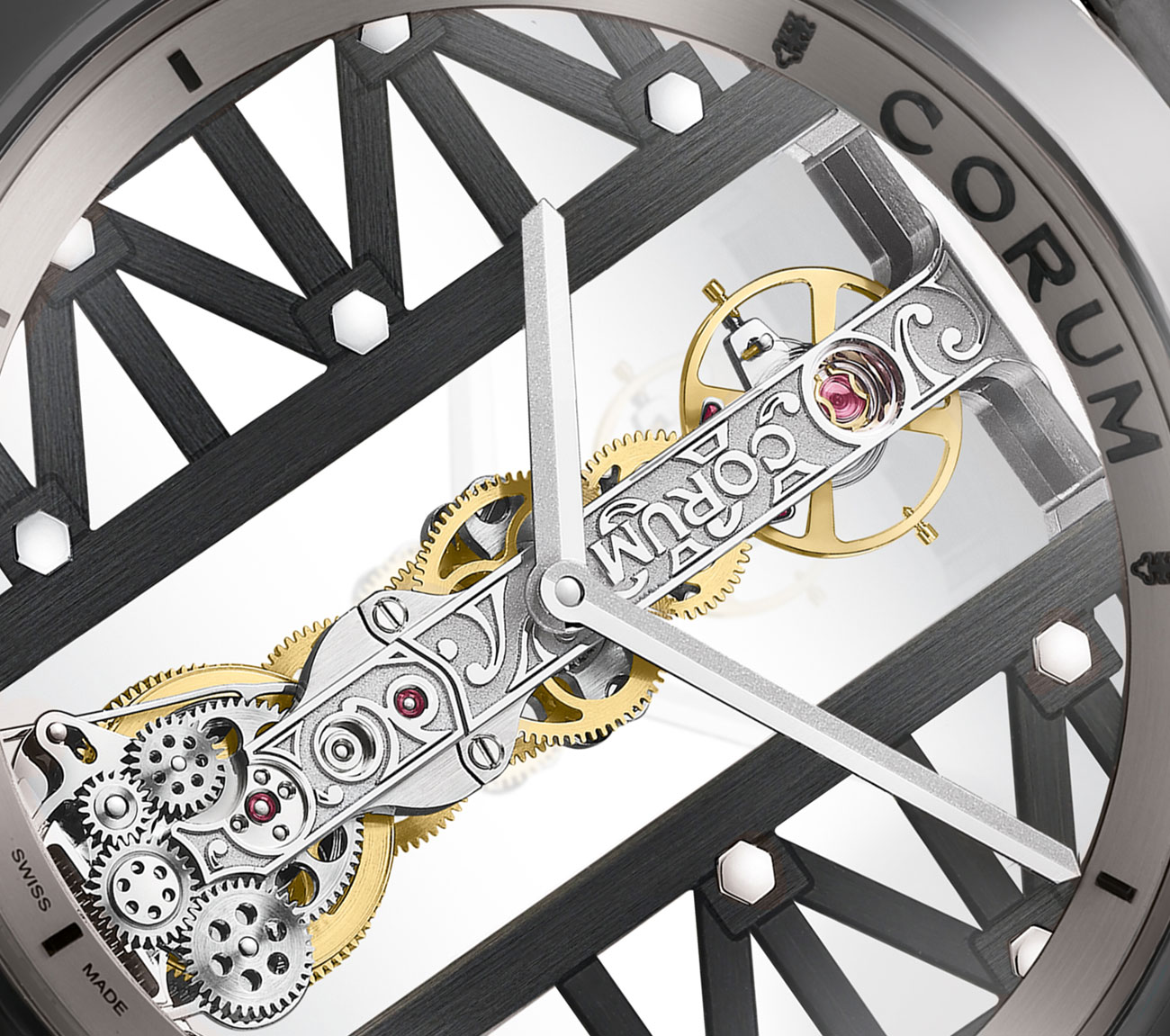 These new variations on Corum’s circular case seem apropos with the progression of the brand’s design concept. The movement itself and its unconventional construction are emphasized and displayed here. The contrast between the polished DLC on the case and struts of the watch cause the precious metals on the movement itself to pop, accentuating that “bridge” that makes up the overall movement’s aesthetic. 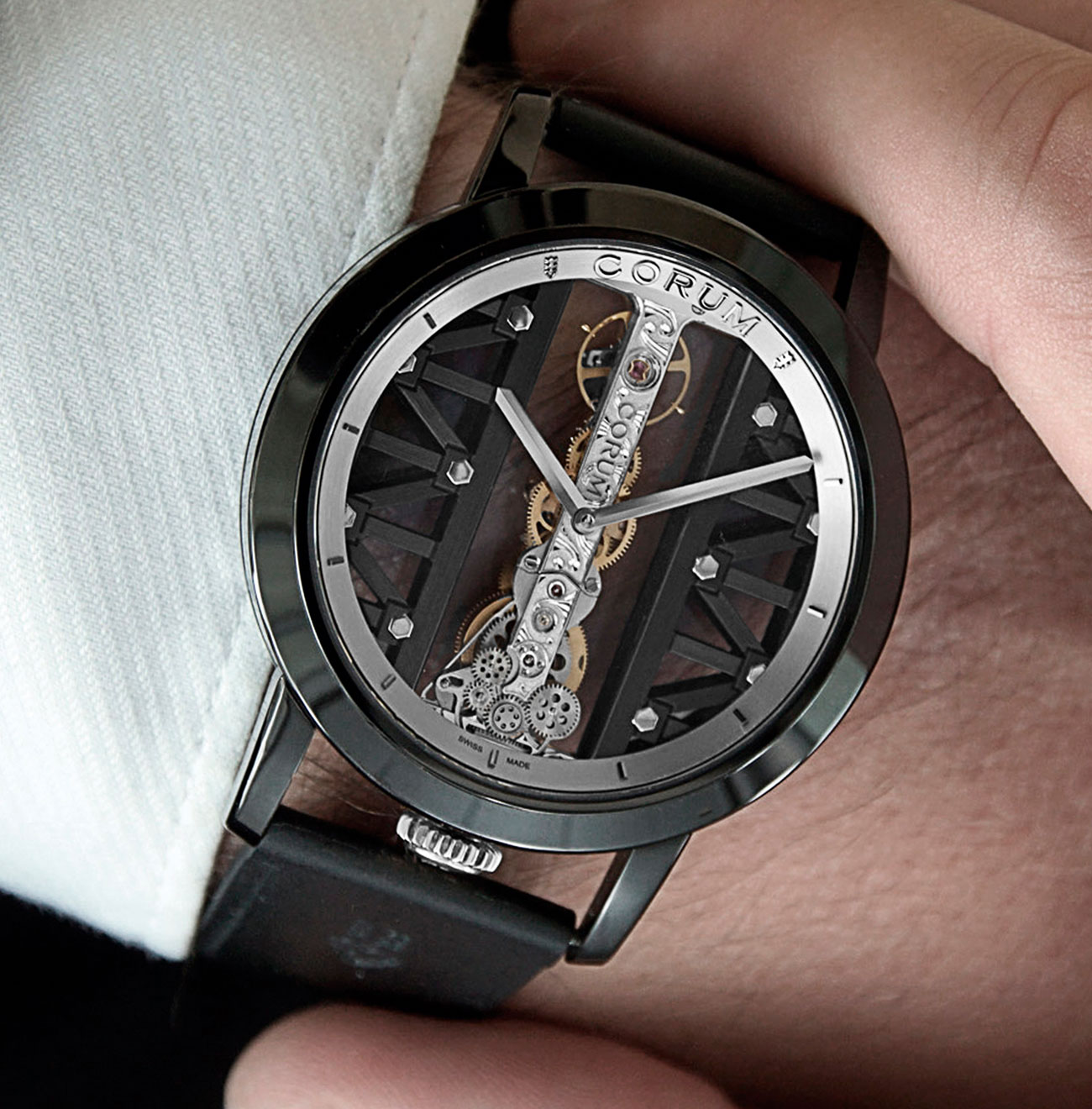 The construction of the watches we wear is something we perhaps don’t consider enough. We may discuss different elements of a watch between the case, dial, etc., but the Corum Golden Bridge emphasizes the structure of the piece both physically and conceptually – the linear movement suspended at either end of the case and the gear train ticking away between two sets of DLC-coated struts really bring this into sharp focus. I find these visual elements to be very compelling. 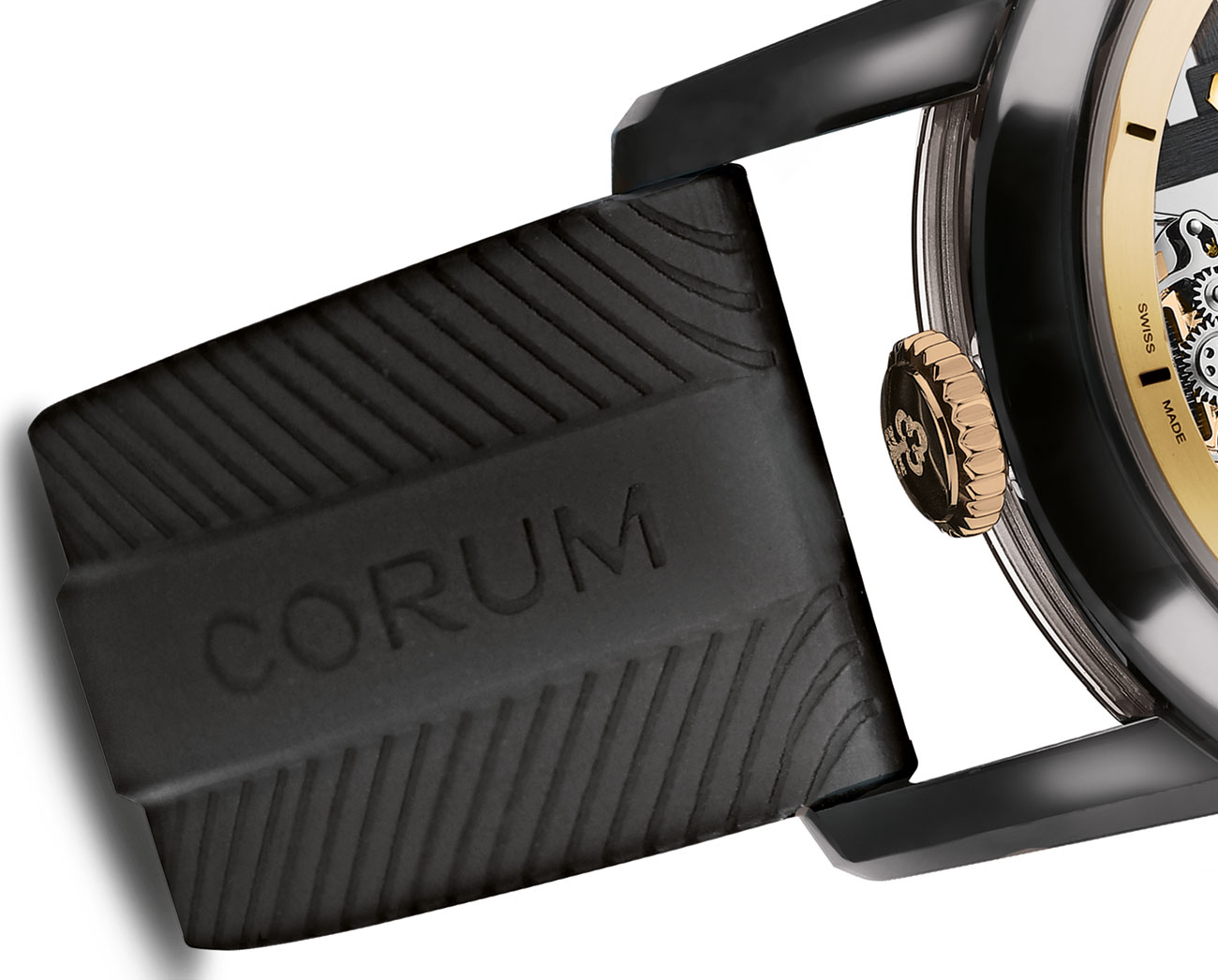 The Corum Golden Bridge Titane DLC watches will be offered on a rubber strap with a tire tread-like texture across it, outlining the brand name engraved into the center stripe. This seems like an interesting choice, perhaps appropriate for the sportier look that DLC will convey compared to a precious metal case. On one hand, I think a nice dark leather strap may have fit better, but I can see what Corum is trying to say by using the rubber. 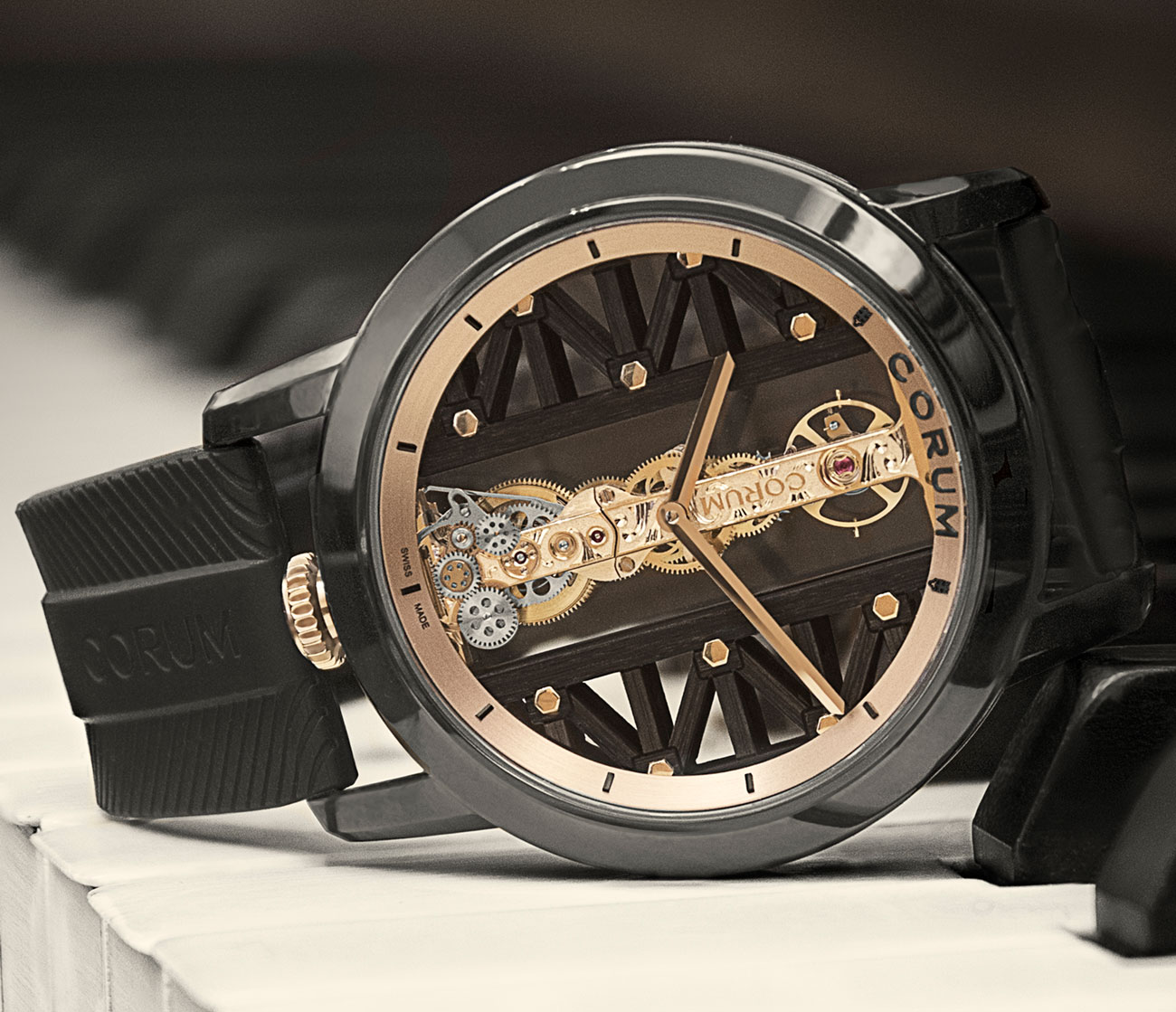 Corum also states that these two watches will soon be accompanied by two additional models “available in the same shades of gold.” It is not clear if the DLC elements will be carried over to those new models. Ultimately, I think the success of these watches will be determined by Corum’s fanbase and collectors focused on fine watchmaking and movement innovation. The Corum Golden Bridge Titane DLC will have a USD price of $23,800 in rose gold and $23,500 in white gold. Visit corum-watches.com for more information.