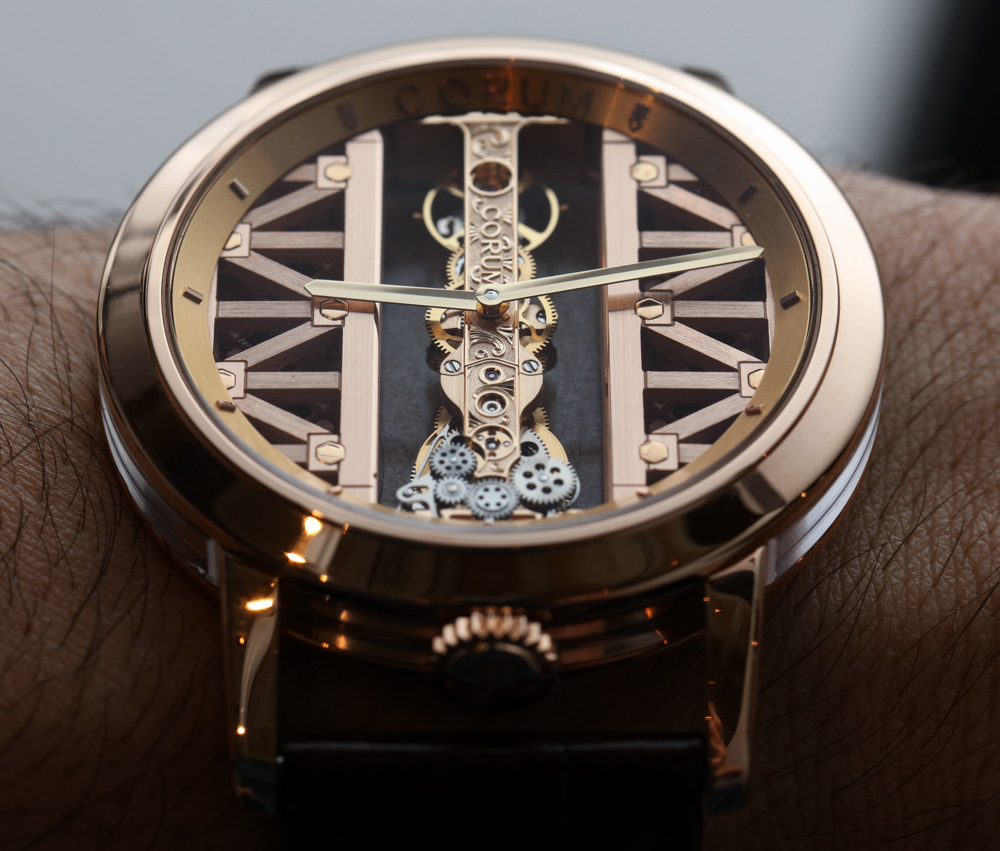 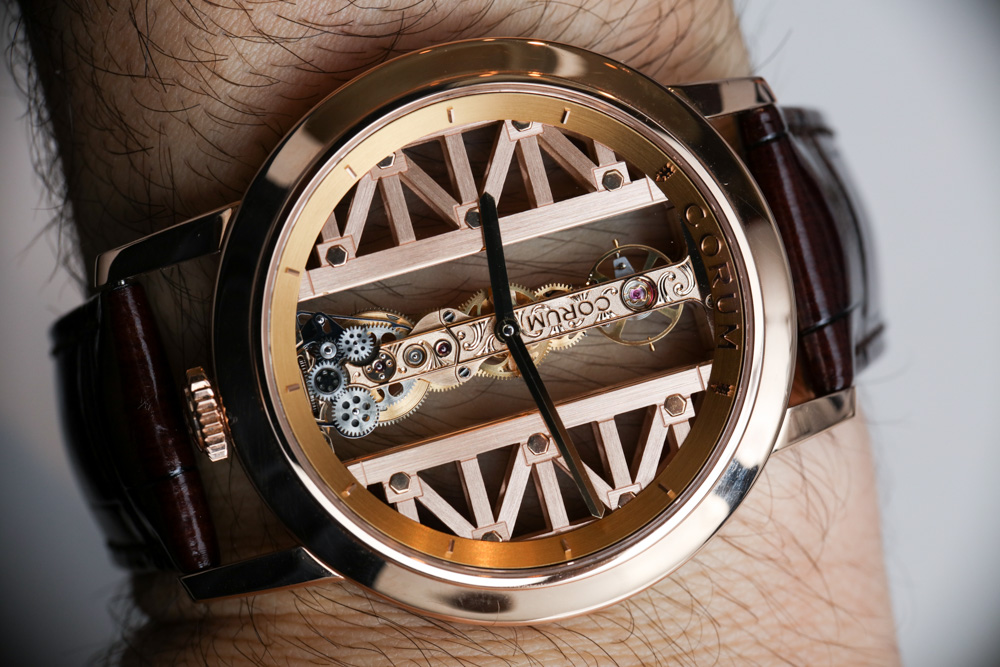 Like many modern watchmakers, Corum has had an interesting time over the last few years. Through ups and downs, the brand circa 2016 is rediscovering itself as well as recalling some of the personalities that made the modern brand interesting. Corum of old (like 10-15 years ago) was a true innovator in terms of style and fashion when it came to how people wear modern timepieces. The Bubble, for example, (which is back this year as well) was a true testament to how a high-end watch could also be really fun. The Golden Bridge is easily one of Corum’s most distinct movements and timepiece concepts, but has had a tough time appealing to Western males despite a really interesting visual presentation. 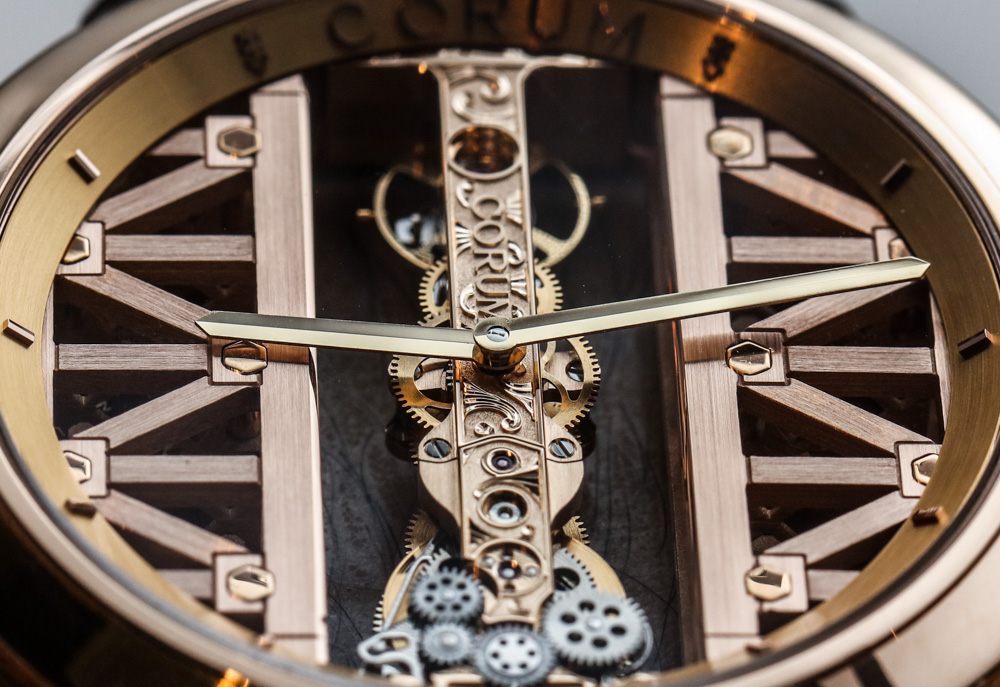 For 2016, Corum might have found a new sweet spot when it comes to the Golden Bridge collection with the new Corum Golden Bridge Round. This is the first time Corum has designed a round case for its linear movement, and the result is pretty interesting. The Golden Bridge movement (here the caliber CO 113) is an interesting mechanical mechanism which is designed to have all the parts stack up in a column-like shape (Corum calls it an “in-line baguette” movement). The bridge holding all the movement parts together is in 18k rose gold, and in this case is decorated with some attractive traditional-looking hand-done engravings. Despite the very compact size of the movement, it still operates at 4Hz with a power reserve of 40 hours – which isn’t too bad at all. The CO 113 movement only indicates the time with hours and minutes. 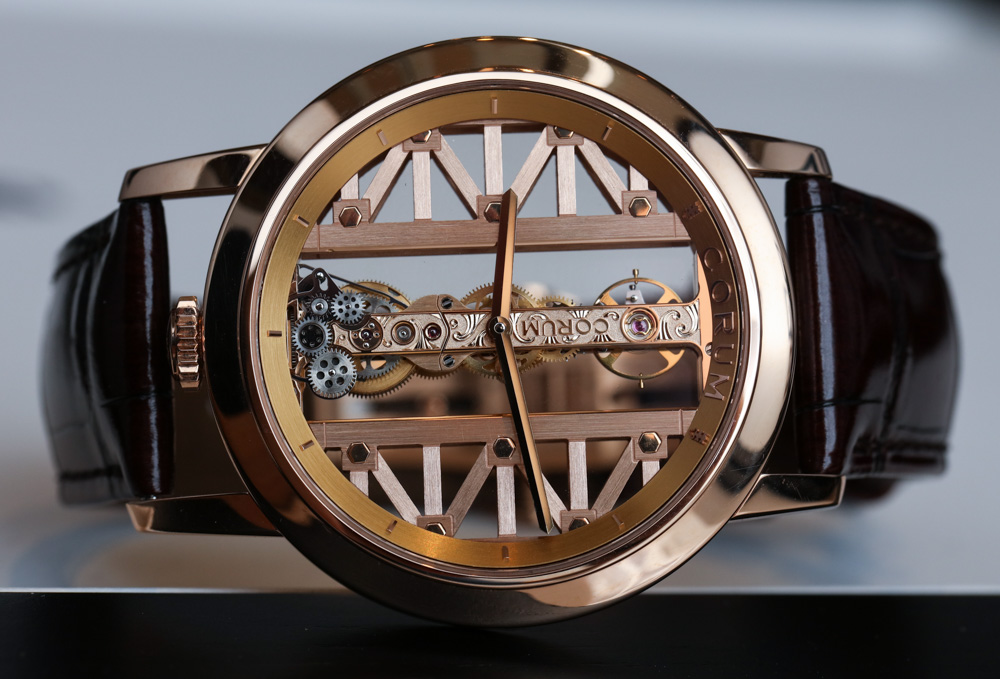 The last time Corum ventured forth in making a more masculine version of the Golden Bridge was with the Ti-Bridge collection (hands-on here). The Corum Ti-Bridge put the movement on its side in a horizontal position and turned the timepiece into a sort of modern sports-style watch. Pricey and without a clear intended demographic, I am sure the Ti-Bridge will be a collector’s favorite in the future, but during its release it was hard to find takers given often niche appreciation of the concept and the competition at that price point. 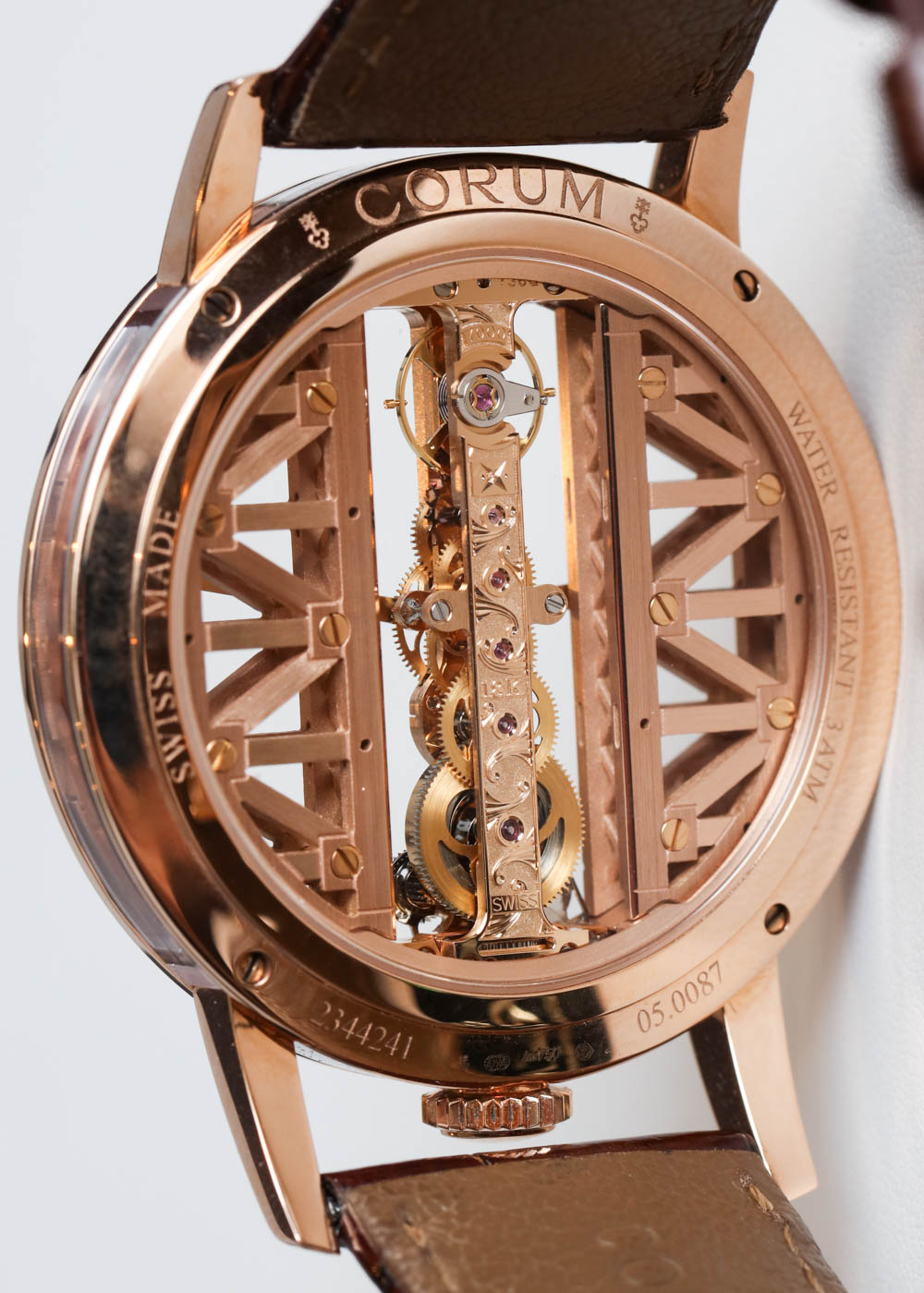 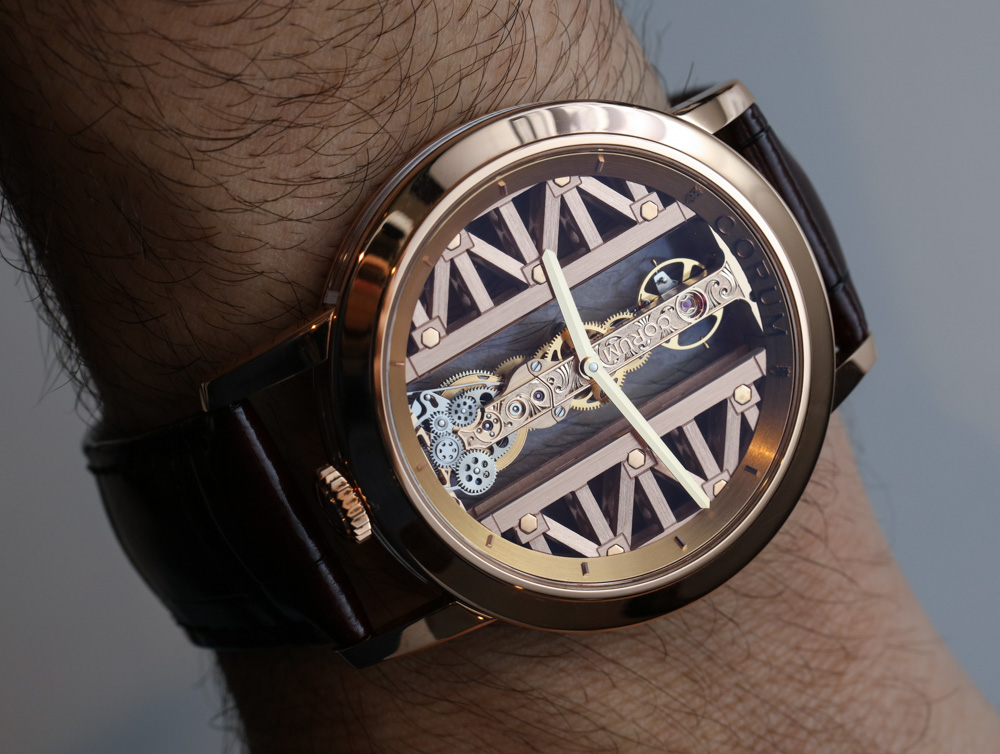 In 18k rose gold (as well as an 18k white gold model set with diamonds), the Corum Golden Bridge Round watch is 43mm wide and just 8.8mm thick, sandwiched by two pieces of AR-coated sapphire crystal. Also, the sides of the case are set with curved pieces of sapphire crystal offering another glance at the “bridge work” decorating the inner parts of the case that flank the movement. At the bottom of the case is the crown for the movement, which is a nice symmetrical position and leaves the sides of the Corum Golden Bridge Round case free from a crown.

The watch hands and flange ring attempt a slight contrast, being done in yellow gold-toned brass. There is a full scale of hour markers on the flange ring, but the watch isn’t super legible by my standards – though for a dressier watch, it isn’t too bad. Attached to the Corum Golden Bridge Round case is a glossy reddish-brown alligator strap that works well with the two gold colors on the case and dial. If you have just the right color of shoes, this strap can look pretty killer. 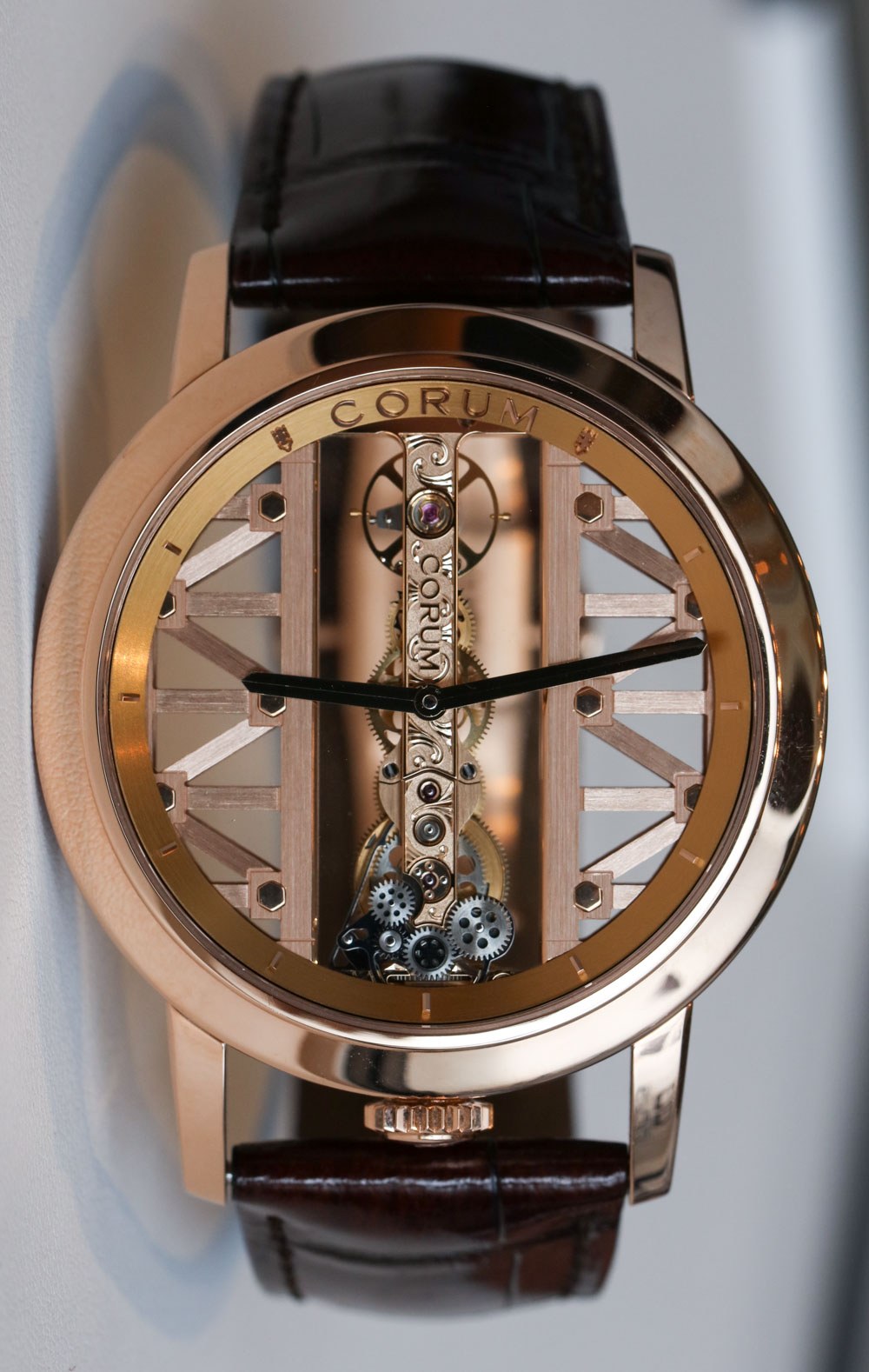 At 43mm wide, there is no doubt that this is a bold timepiece, but being thin with delicate features, the result is more dignified and artistic than brash. Is this a new golden era for the Golden Bridge? I don’t know about that, but Corum has certainly made a compelling new argument for those people who enjoy the movement concept but haven’t until this point had a properly-designed Golden Bridge watch for their wrists. Price for the Corum Golden Bridge Round watch in 18k rose gold is $41,700 and in 18k white gold with diamonds the price is $48,000. corum.ch