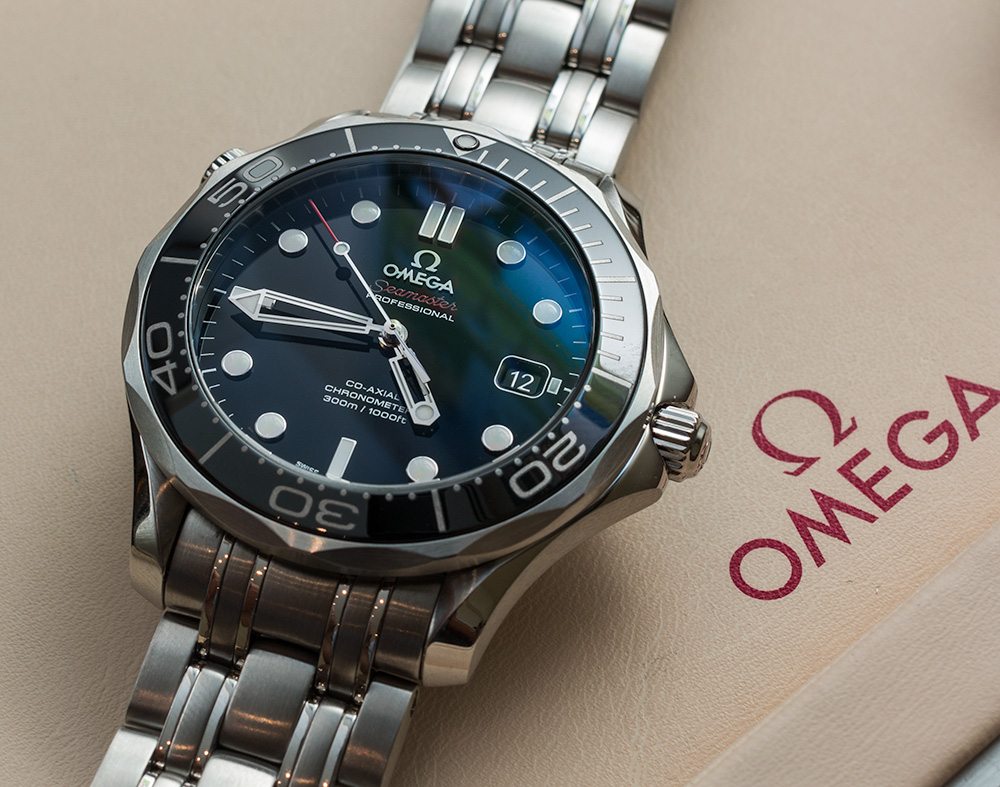 Welcome to the latest installation in our Cost of Entry series, where we find the most affordable entry level pieces from some of the leading luxury watch brands. We previously looked at Rolex’s Oyster Perpetual watch, the Panerai Luminor PAM000 Base Logo watch, and the Hublot Classic Fusion Titanium as each brand’s respective entry-level model. No less than a giant in the watch world, and with more than a few fans in the aBlogtoWatch community, our series would be incomplete without Omega Watches and, to play within the rules of our Cost of Entry series, a look at the brand’s most affordable automatic timepiece available today: the Omega Seamaster Diver 300M Co-Axial Chronometer watch. Oh, and we’ll also check out the Omega Seamaster Aqua Terra 150M, a quartz model coming in as the brand’s lowest priced men’s watch. 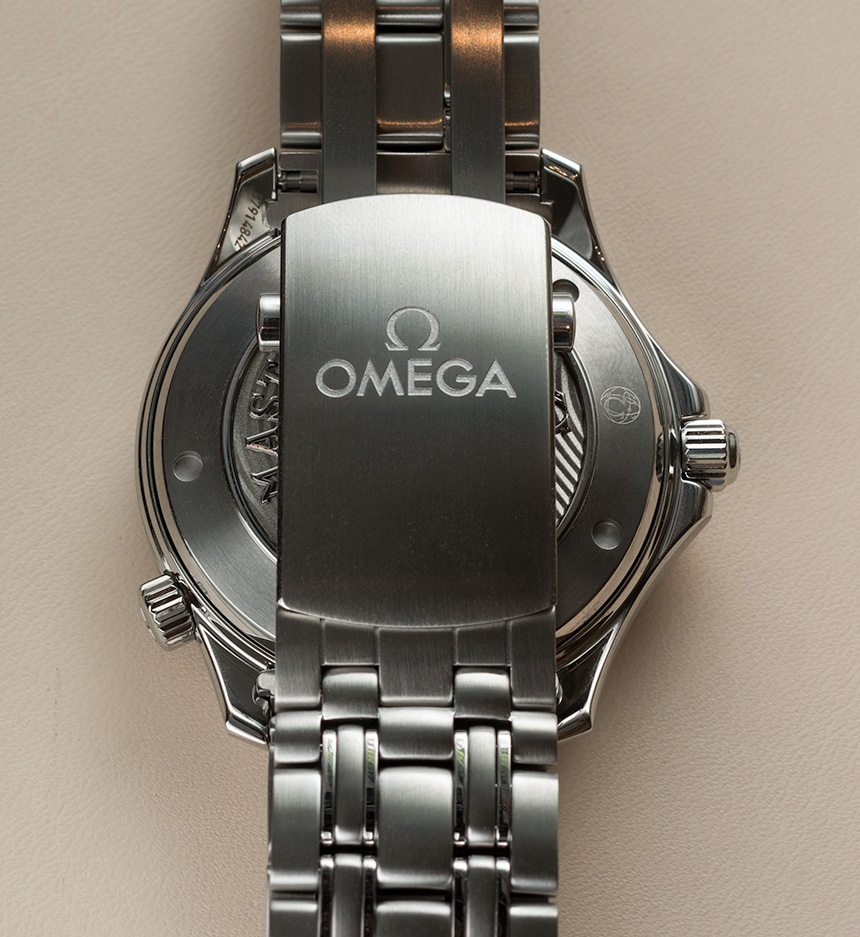 In recent years, Omega has been upping their game in build quality, movements, design, and yes, as a consequence, sometimes in pricing. This year saw a revamped Seamaster Planet Ocean line featuring several models that boast the new “Master Chronometer” movements, which means passing extensive METAS in-house testing at Omega. The METAS certification was debuted with the reintroduction of the Globemaster in 2015, a revamped version of an old Constellation watch that, for many onlookers, was the gauntlet being thrown at another dressy, fluted-bezel watch with a date window that we won’t single out.

Omega plans to eventually apply the certification to most all its in-house movements. That’s just part of what’s been new at Omega, and although we can’t even get into the near-mythic Speedmaster Moonwatch for this article, I will mention the one-of-a-kind cool-factor that comes with the Seamaster being the “007 watch.” Fans of the Omega Seamaster can rejoice that the line represents the most affordable Omega watches, both mechanical and quartz. 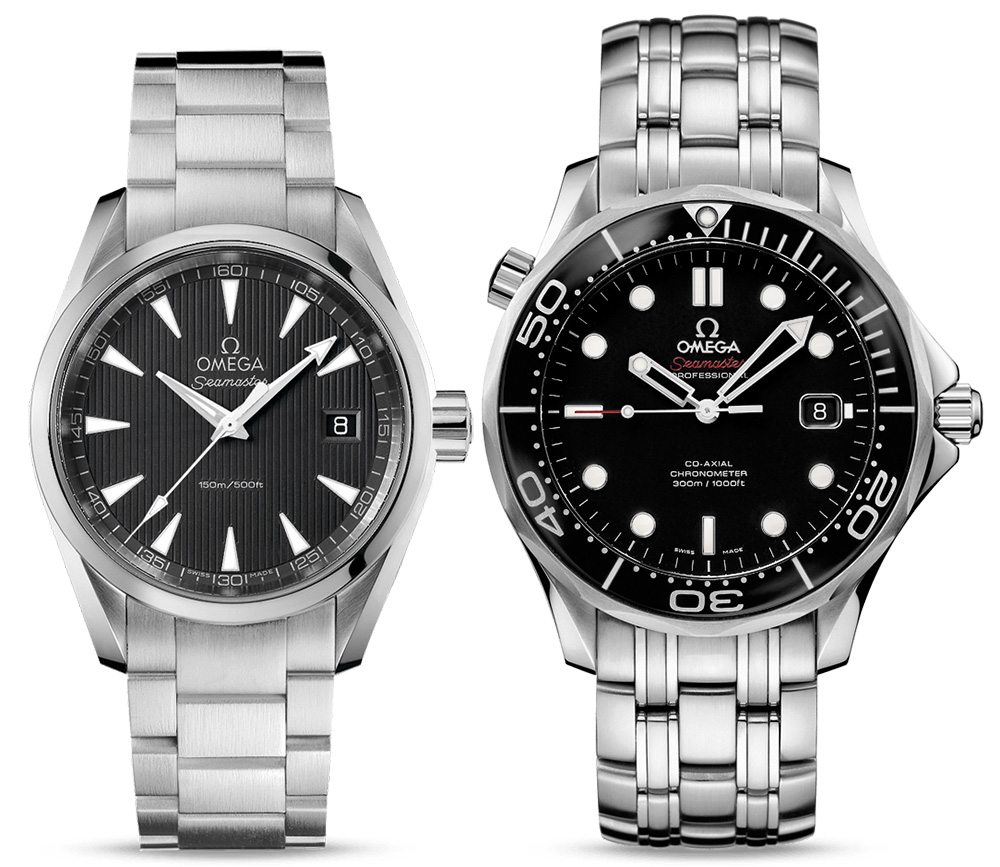 For the record, I believe the absolute least expensive Omega watch overall is the ladies’ 24.4mm quartz De Ville Prestige, at around US$2,650. But, according to Google Analytics, the aBlogtoWatch audience is about 90% male (no towel snapping, please) and probably overwhelmingly interested in mechanical watches, so we are tweaking our Cost of Entry definition a little bit. Today, we will be looking briefly at the Omega Seamaster Aqua Terra 150M as the entry-level men’s quartz watch at under US$3,000, and then more at the Omega Seamaster Diver 300M Co-Axial as the entry-level men’s mechanical watch at US$4,000-plus.

Fans of the brand will find that Omega’s most basic watches offer a lot of what they like – if not everything some perhaps want, of course. We should not be surprised or disappointed that luxury bells and/or whistles cost more, and that entry-level pieces don’t have some of the premium features that get horology fans excited. In Omega’s case, however, these are not stripped down, compromised, or at all lacking in the technology, quality, style, or history the brand is known for, and we want to look at exactly what they offer. 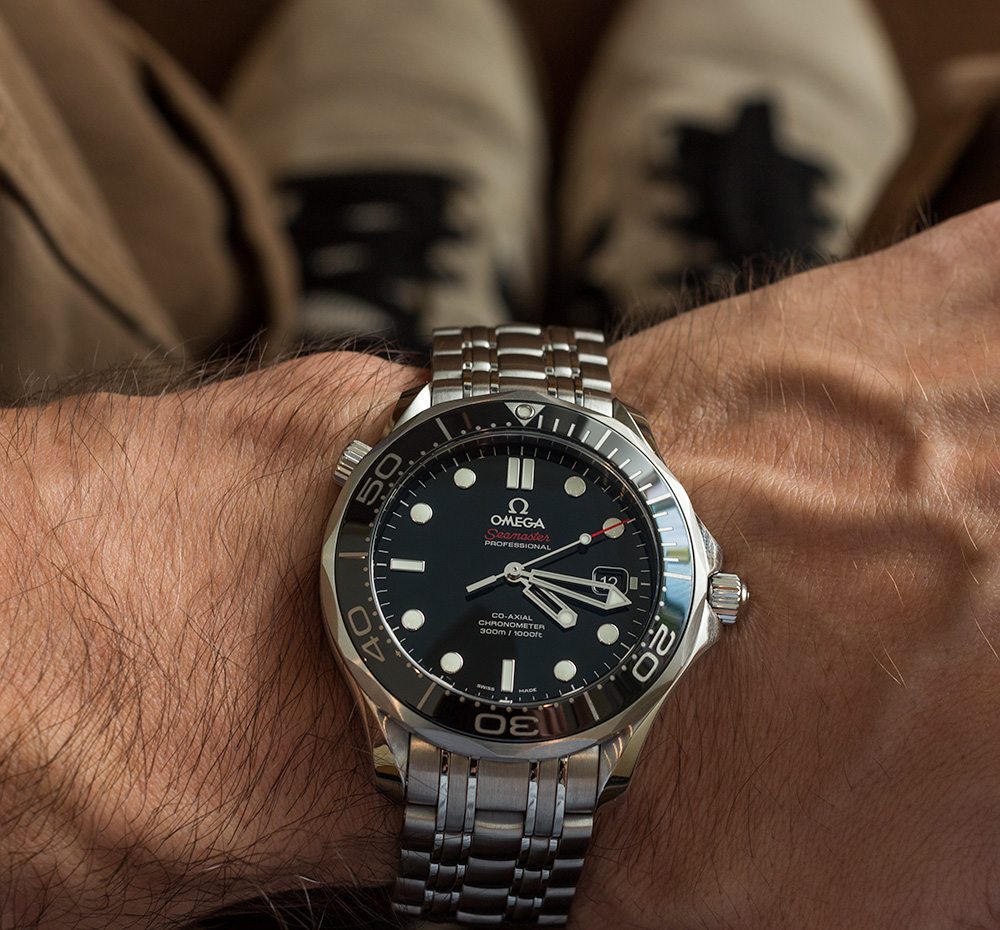 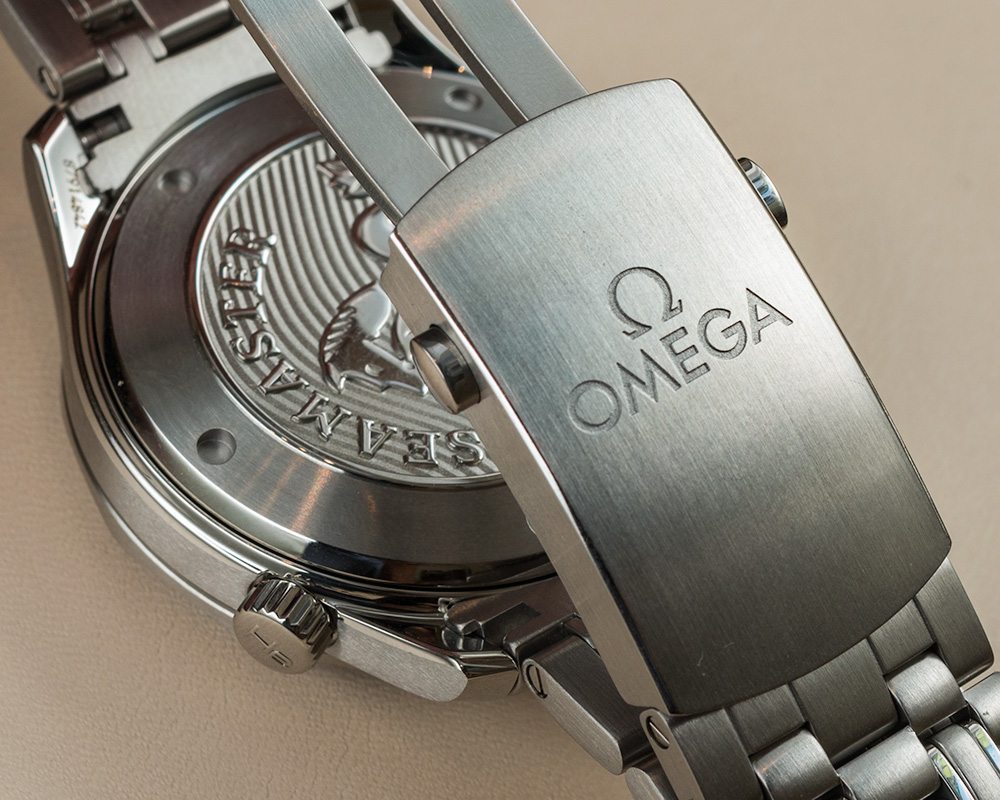 Someone who wants an Omega on their wrist for more than just the luxury name likely appreciates the history that comes with it. At least for many fans, the Seamaster and Speedmaster lines are the most representative of Omega. The venerable Seamaster line is where our focus is today because that is where we find both the Diver 300M and the Aqua Terra. The Seamaster is the oldest of Omega’s current lines, introduced in 1948 – when the brand was already 100 years old. The Aqua Terra stands apart in the Seamaster line that today is otherwise Omega at its sportiest and is mostly populated by serious dive watches. The Omega Seamaster Aqua Terra 150M watches, on the other hand, are reminiscent of the earlier and more dressy Seamaster watches, but still retain a modern, masculine, and subtly sporty edge – not to mention 150 meters of water resistance. 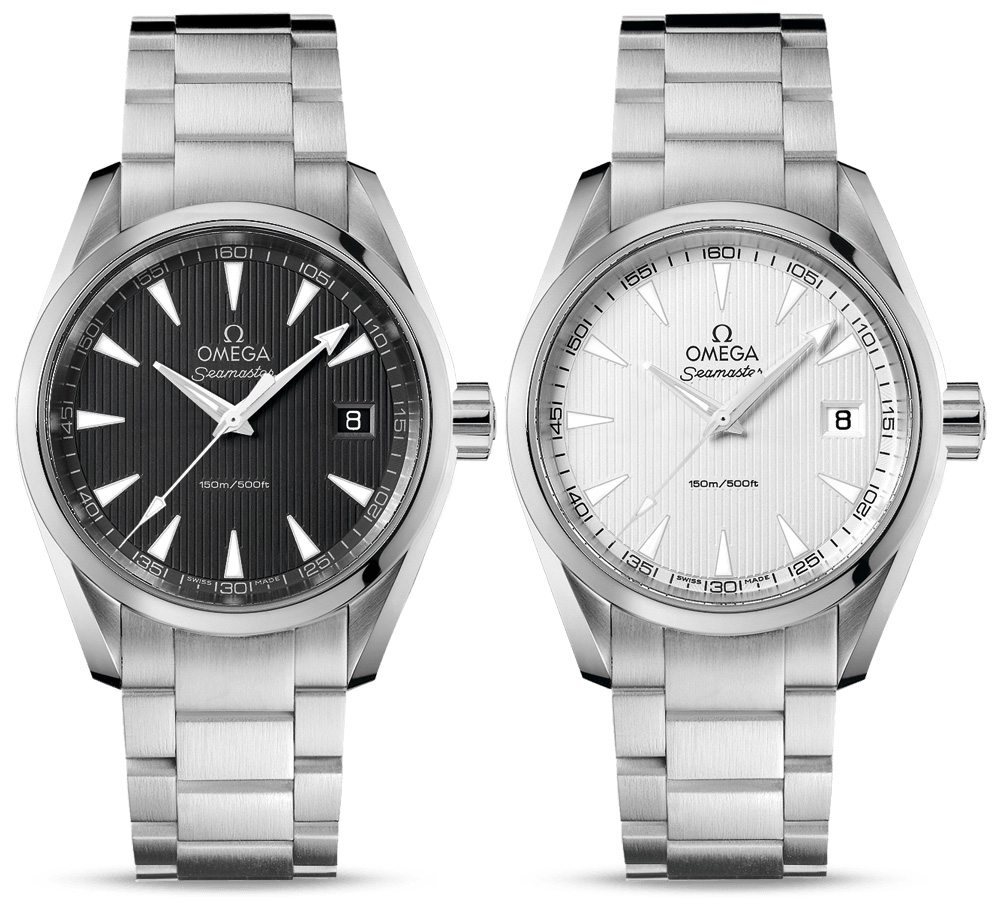 Pictured above, this particular Aqua Terra 150M model is the most affordable men’s watch from Omega. With Omega as Official Olympic Timekeeper of the recently concluded 2016 Summer Olympics in Rio, the brand also gifted these particular models to the U.S. Olympic team athletes (who, in addition to their new watches, took home 46 gold medals) – so we felt this article is timely in a couple of ways. With a choice of grey or white dial in a 38.5mm steel case, this Omega Seamaster Aqua Terra 150M runs on the Omega 4564 Swiss quartz precision movement – from Swatch sister company ETA – with a battery life of 25 months.

The full range of Omega Seamaster Aqua Terra watches offer a number of sizes and variations, with the materials, finishing, and construction you should expect from Omega. All are 150 meters water-resistant, promising a good level of durability, especially considering what may be seen as a more classic/dressy styling. They can, of course, claim to share the history of the Seamaster line and Omega overall. So the most affordable Omega men’s watch offers all of that – in other words, more or less all you should want from an Omega watch except for a biggie: a mechanical movement. 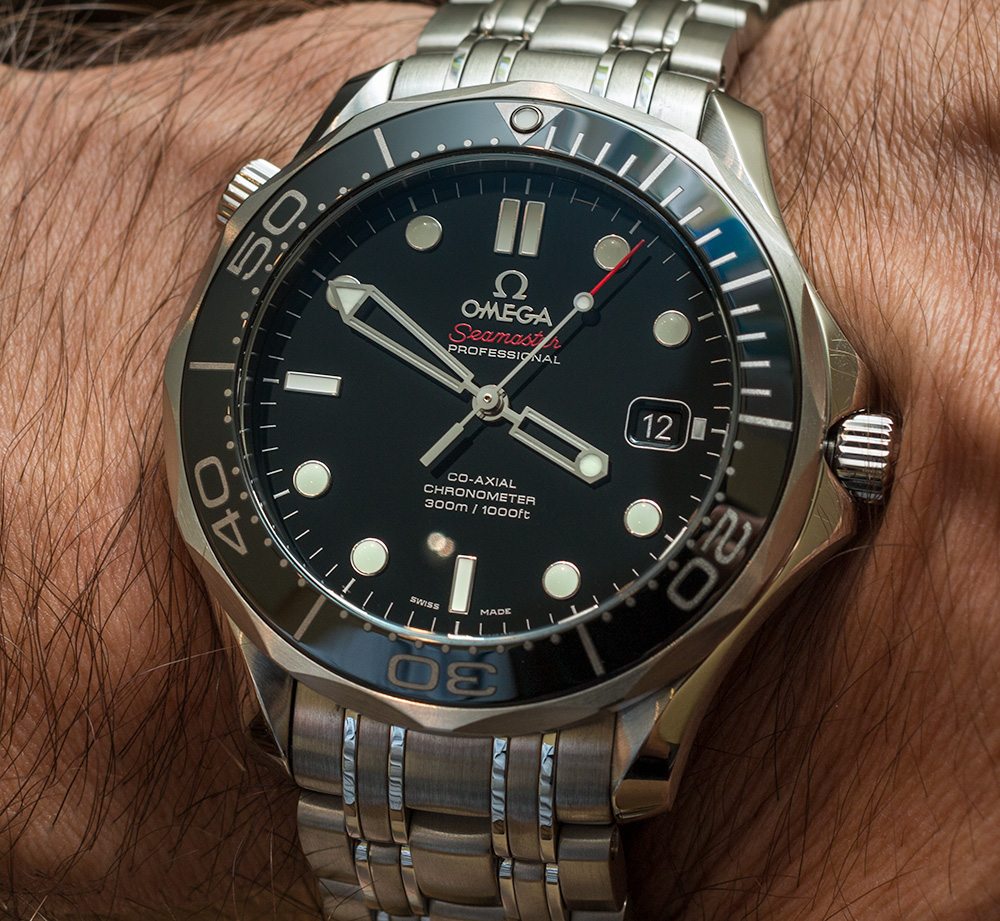 So, since quartz won’t cut it for many watch lovers, they will be looking to the Omega Seamaster Diver 300M Co-Axial as the most affordable mechanical Omega watch for men. At this price point, the simple three-hand Omega Seamaster Diver 300M Co-Axial watches are available in 41mm and 36.25mm cases, each with lacquered dials and ceramic bezels in blue or black. The photographs here are of the 41mm-wide, 13mm-thick version (and for reference, my wrist is 6.5″, or about 17cm). 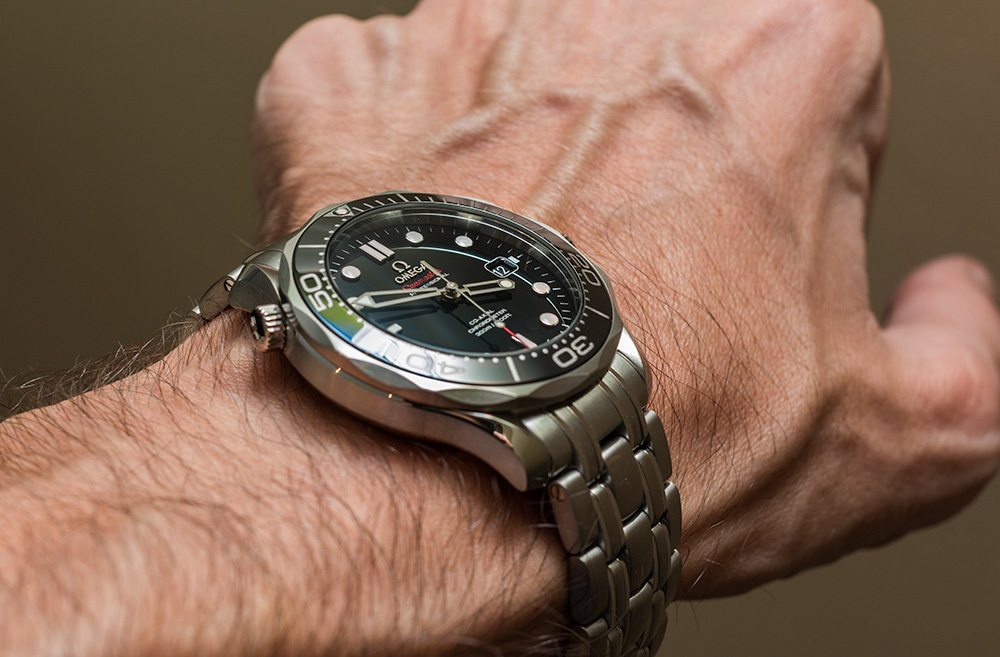 Obviously water resistant to 300 meters, the Omega Seamaster Diver 300M Co-Axial qualifies as a “professional dive watch” and includes a helium escape valve at 10 o’clock. While the helium escape valve will mostly find function as a conversation piece, not all dive watches include them – so it lends to the idea that even Omega’s least expensive mechanical watch is not at all a bare-bones product. 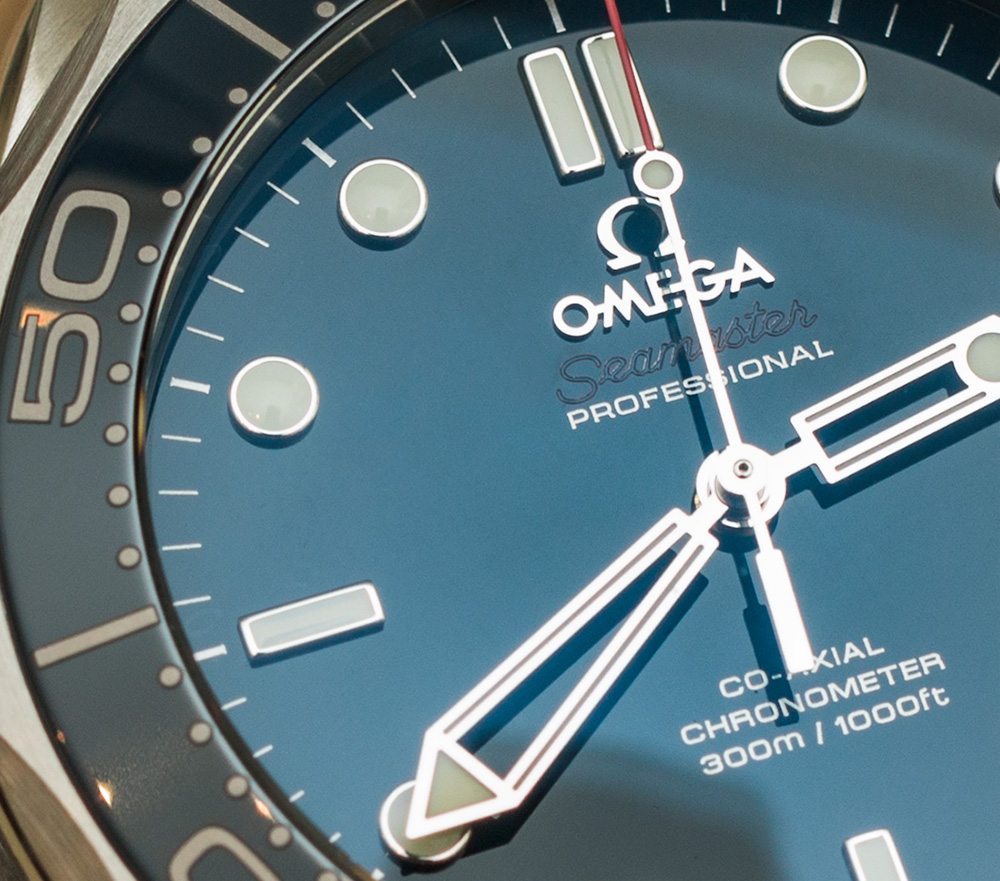 Further supporting that notion is the ceramic bezel. Even though the use of ceramic is becoming more common and even approaching “standard” in dive watch bezels these days, the Omega Seamaster Diver 300M has featured it since 2012. The ceramic bezel adds notable value, and in combination with the sapphire crystal, it means that the entire front of the watch is essentially scratch-proof forever. Note, also, that the lume extends not only to the hour markers, bezel pip, and tips of the hands, but thin strips on the skeletonized shafts of the hands also glow in the dark – ensuring that your Omega watch will be readable and recognizable in all lighting situations. 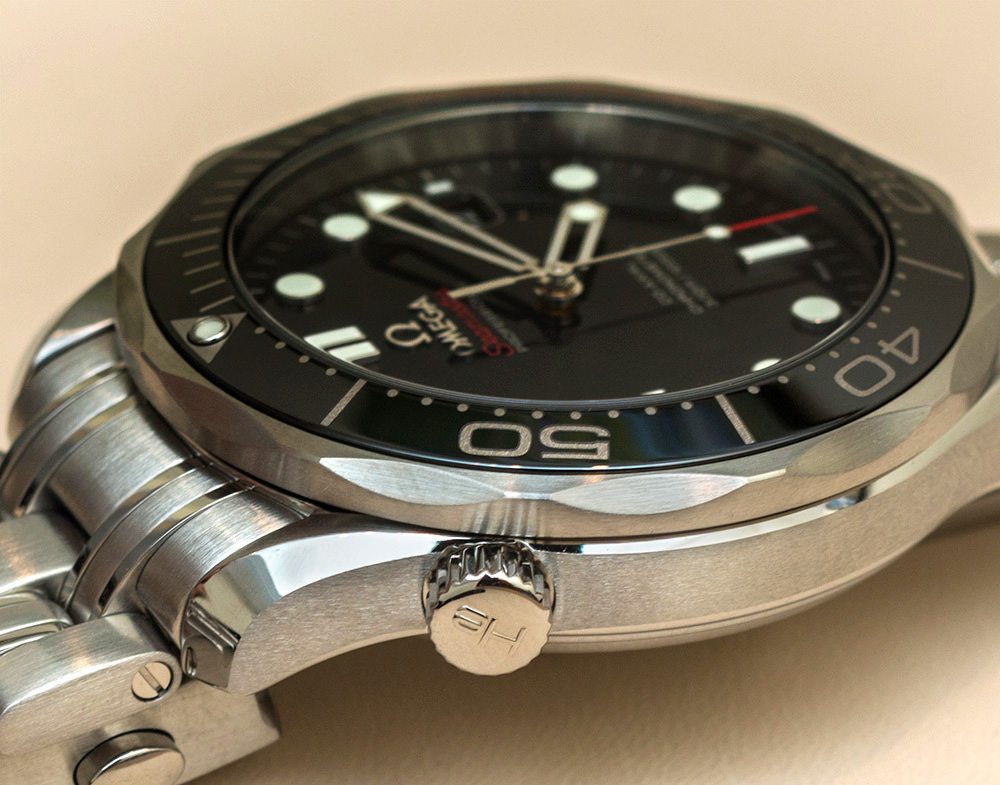 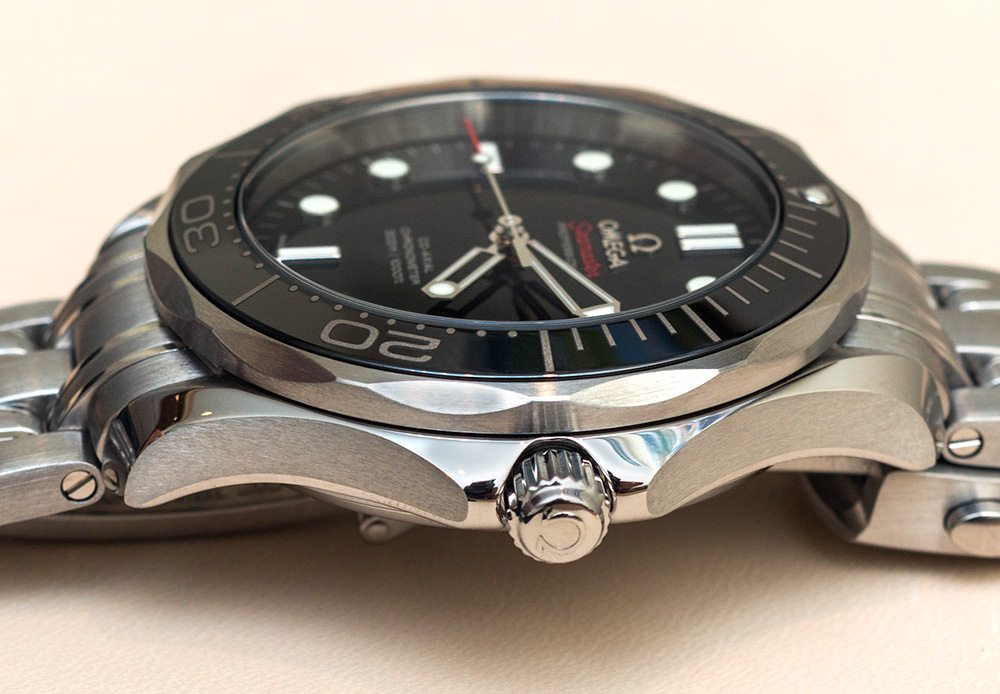