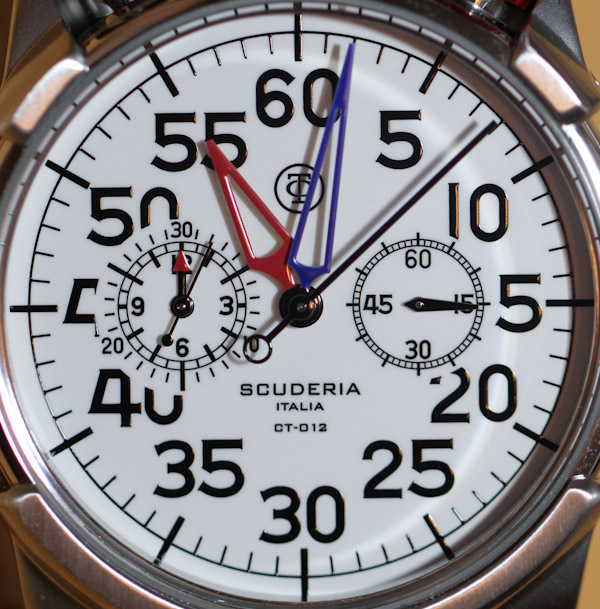 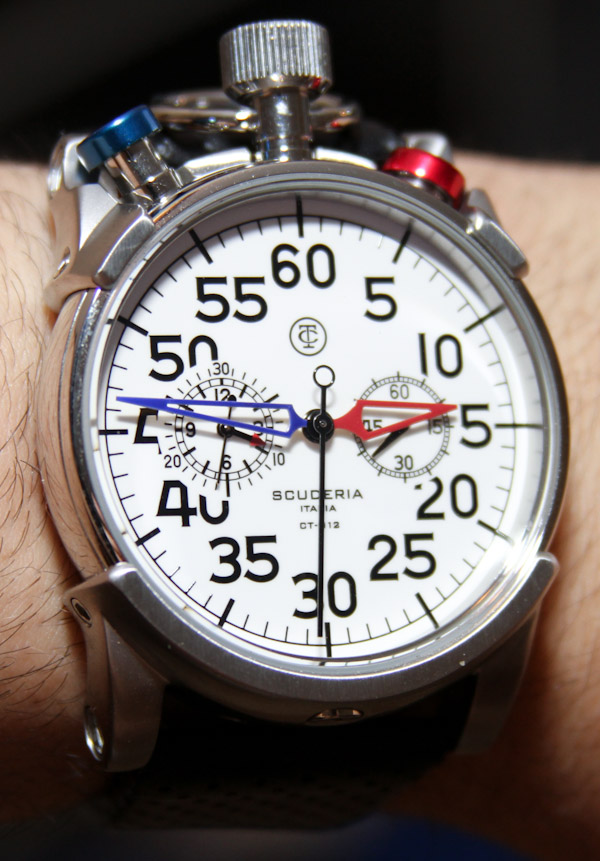 What we don’t suffer from in any short supply are modern wrist watches made to look like vintage sport watches. What we have a lot less of are modern watches meant to look like sport stopwatches. I don’t really get why that is. Most serious sport or event timers use dedicated stopwatches to measure time versus a watch on their wrist. Today stopwatches are purely digital, but the tradition of using them continues. Most historic stopwatches – even more so than wrist watches – were designed to be legible and functional.  It would seem to make sense that clever watch makers might try to adapt their look and personality into wrist watches more.

While CT Scuderia might not be the first brand to design a wrist watch based on a sports stopwatch, they are among the few. My favorite stopwatch watch design is however the Seiko Izul (but good luck finding one of those champ). More affordable, and more clearly a stopwatch in theme are pieces in the CT Scuderia brand, a new Italian-designed watch maker. The Corsa is one of their flagship pieces and we get to review it for you today. 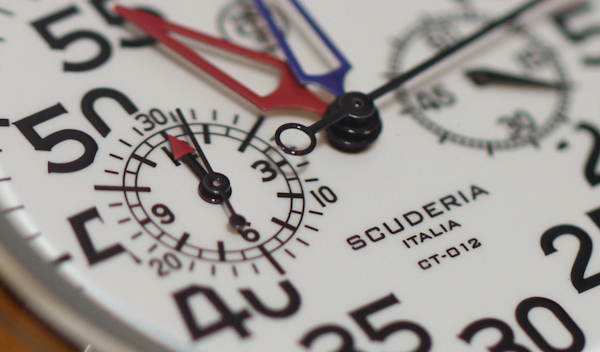 What I realized about the Corsa very early on is that it is a very polarizing design. I find that such a quality is more and more common with modern Italian designed timepieces. In an effort to be different, you get some usually clever, but often avant garde watches that you either really like or won’t want to get near. Italy has long since been known as a test market for watches and fashion – so it makes sense for their watches to be so wonderfully different. While the Swiss are known for being conservative and the Germans are known for their laser focus on utility, the Italians have a more emotive sense of watch design that shows they are willing to take risks.

Out of all the CT Scuderia pieces the Corsa with its white lacquered dial caught my attention first. The white dial and contrasting black markers are very utilitarian and suggestive of a pocket watch. I love the purplish-blue minute hand and the red hour hand as well for the splash of color they add. While not the most sophisticated dial on the planet, it has good proportions and looks both stylish and functional as the brand seems to have intended. In addition to the white dial, black dialed CT Scuderia watches are also available – but for different models (such as the Touring). If you want a more simple dial for the Corsa, then the black-cased model has an all black and white dial available.

While the dial has just two subdials, it does measure a full 12 hours. The right subdial is for the time’s sub seconds, while the left subdial has two hands in it. It measures the chronograph minutes and well as hours. A central hand measures the chronograph seconds. Anyone wishing to use the Corsa as a stopwatch will be able to, but one drawback is that the Swiss Ronda quartz movement only measures time in one second increments. This means that timing results cannot include any fractions of a second. That is simply the nature of the movement used in the watch.  Having said that, reading the watch is pleasurable and legibility is quite high. 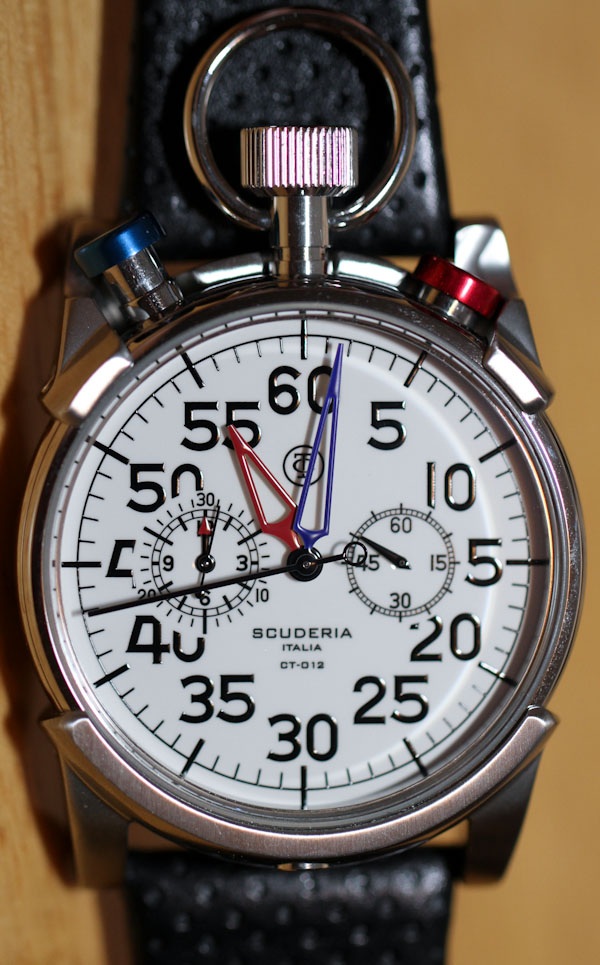 The Corsa watch case is in steel, and offered in this picture of brushed and polished finishing, or in a PVD black case. The case design sort of looks like a bracket holding a pocket watch style stopwatch. The position of the crown and pushers are on the top, and the ring around the crown is still there. The colored aluminum caps on the chronograph pushers are a nice colorful touch. One is raised up to remind you it is the start and stop pusher.

How does it look on the wrist? Pretty much as you would expect. A bit strange but certainly wearable. You could make a rather persuasive argument that for some, the watch could be very fashionable. I can see that with the right outfit – though I am not sure what that outfit might look like. On my wrist I think it is rather interesting in a sort of avant garde unique way. My lady isn’t totally into the design, but some of my guy friends think it looks hip. It just goes to show that it is hard to predict what people will think about the interesting CT Scuderia brand. 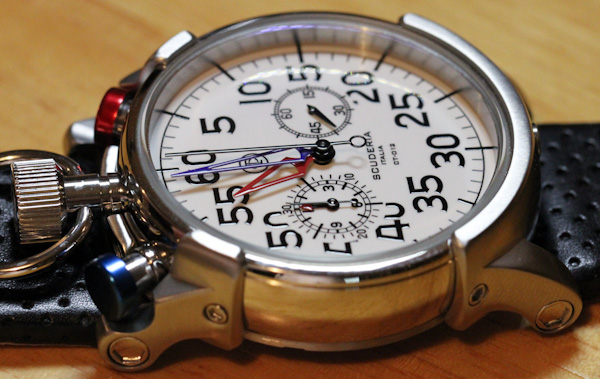 Little details on the side of the case such as the hex-screws and the metal plates are welcome – adding a level of sophistication to the case design. Again, you don’t have to love the watch to appreciate its unique character. That is really what I love about the watch industry – the fact that not all watches are designed to appeal to everyone. Some people see this Corsa and say “wow I want that.” Others think “no way I would wear that.” The fact that reasonable people can disagree on watch design is what makes this hobby the most enjoyable for me. I want to add that the perforated and tapered black leather strap is super Italian (of course), and also helps the design of the Corsa watch a lot.

As a designer watch the Corsa is very interesting and represents the theme of the newer CT Scuderia brand rather well. It certainly isn’t a watch for everyone, but the right people will be drawn to its stopwatch/motorsports aesthetic and personality. Even though it has a Swiss movement, the watch is quartz based and priced a bit on the higher-end in my opinion. Having said that, the detailing and construction of the watch is of a high-quality. I supposed we aren’t used to quartz watches with prices over $1,000. The entire CT Scuderia watch range goes from about $995 – $1,395, with this specific ref. CT20100 Corsa model being priced at $1,295.