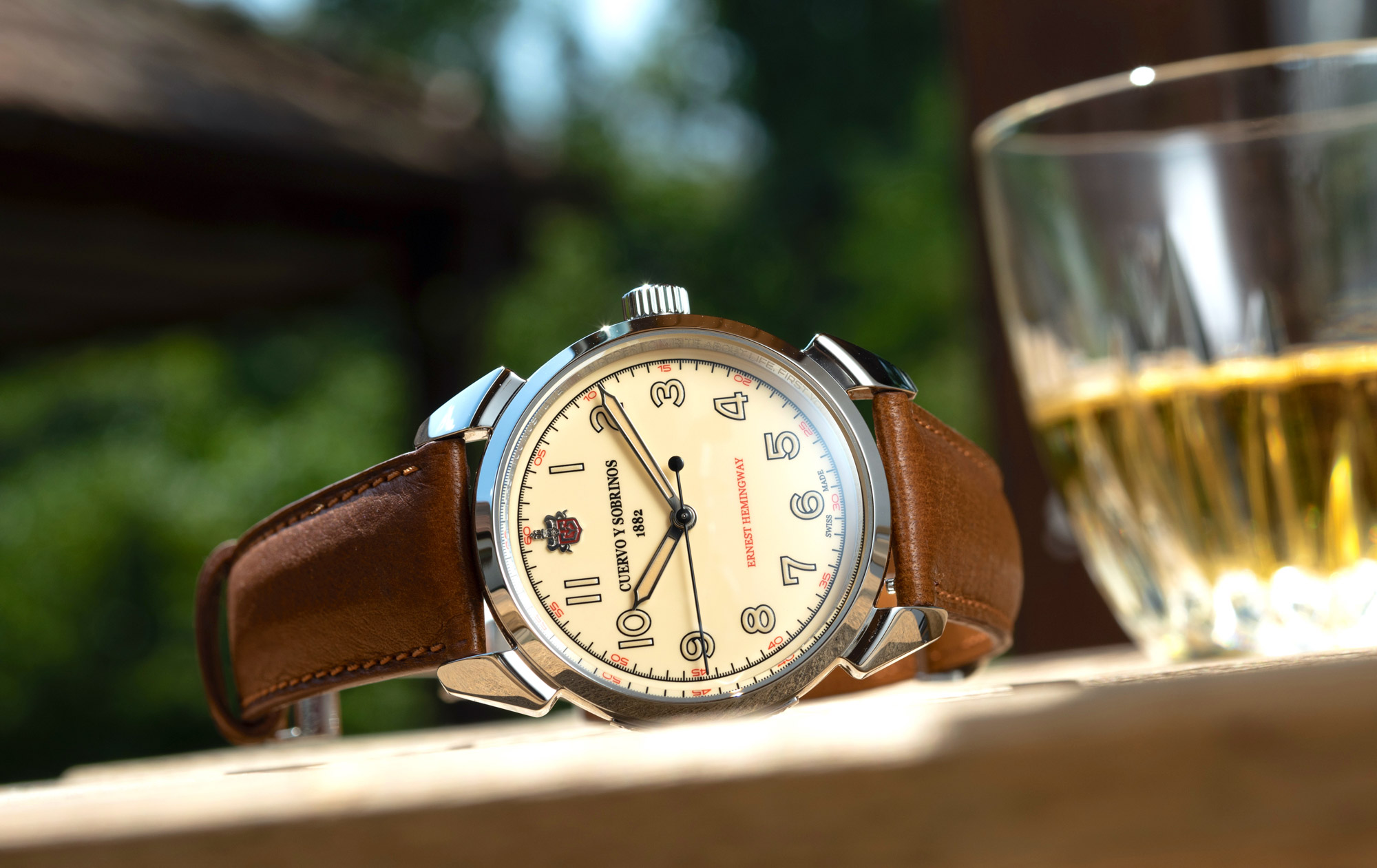 Founded in 1882 by Ramón Fernández Cuervo in the heart of Havana, Cuba, Cuervo y Sobrinos is the only luxury watch brand with a true Latin legacy. Since the company’s re-launch in 1997, Cuervo y Sobrinos has been committed to producing finely crafted Swiss-Made timepieces that pay tribute to Havana’s golden years by embodying the rich and vibrant culture of its home city. The brand’s latest release is the Cuervo y Sobrinos Historiador Hemingway, which honors Ernest Hemingway, the great American literary figure and former patron of the brand, who would frequently visit the Cuervo y Sobrinos boutique in Havana during the years that he lived in Cuba. Created in collaboration with Hemingway Limited, the new watch is officially licensed by the organization that manages the Ernest Hemingway trademark and features a number of design details that pay tribute to the life of the great literary hero. 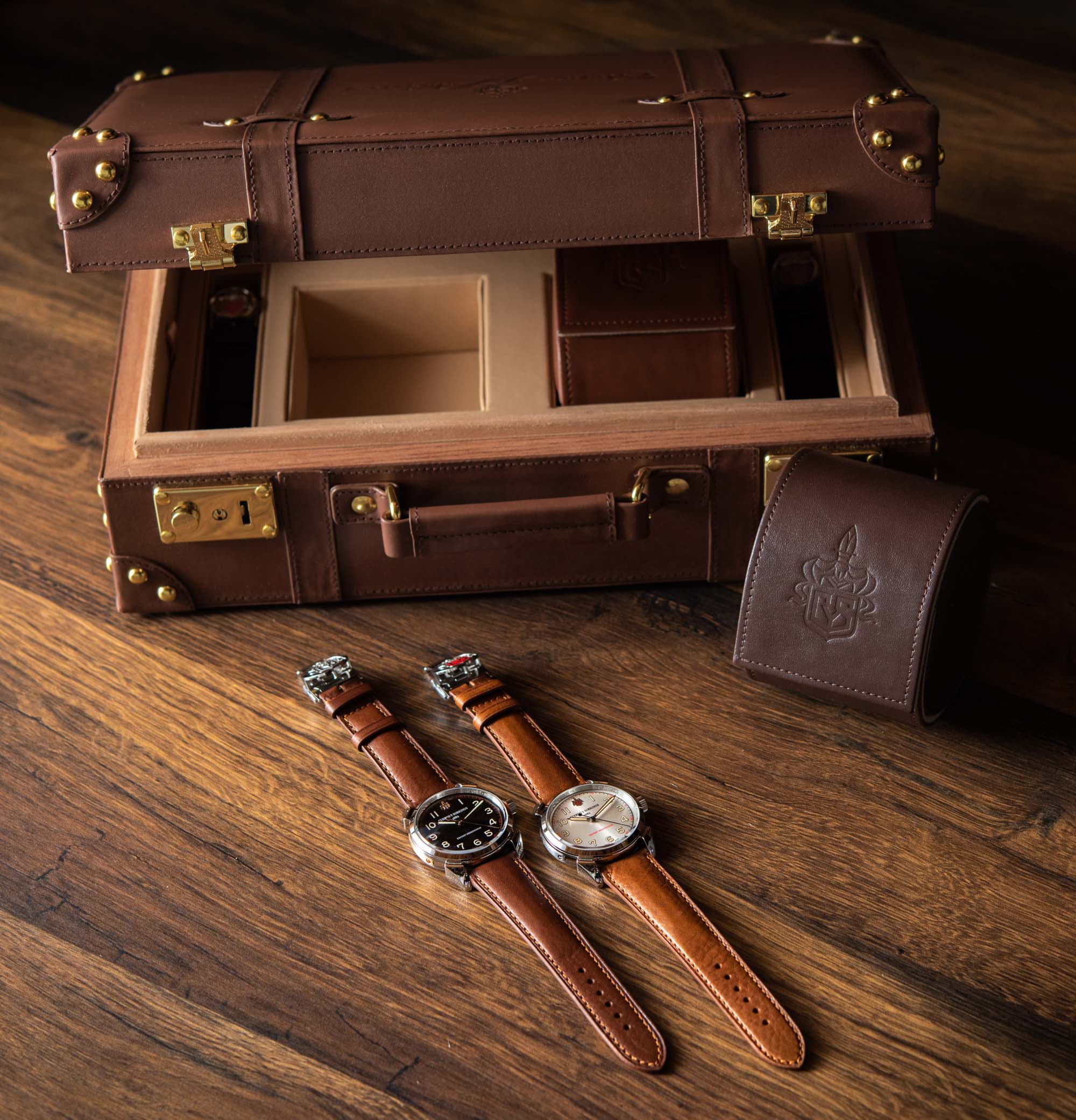 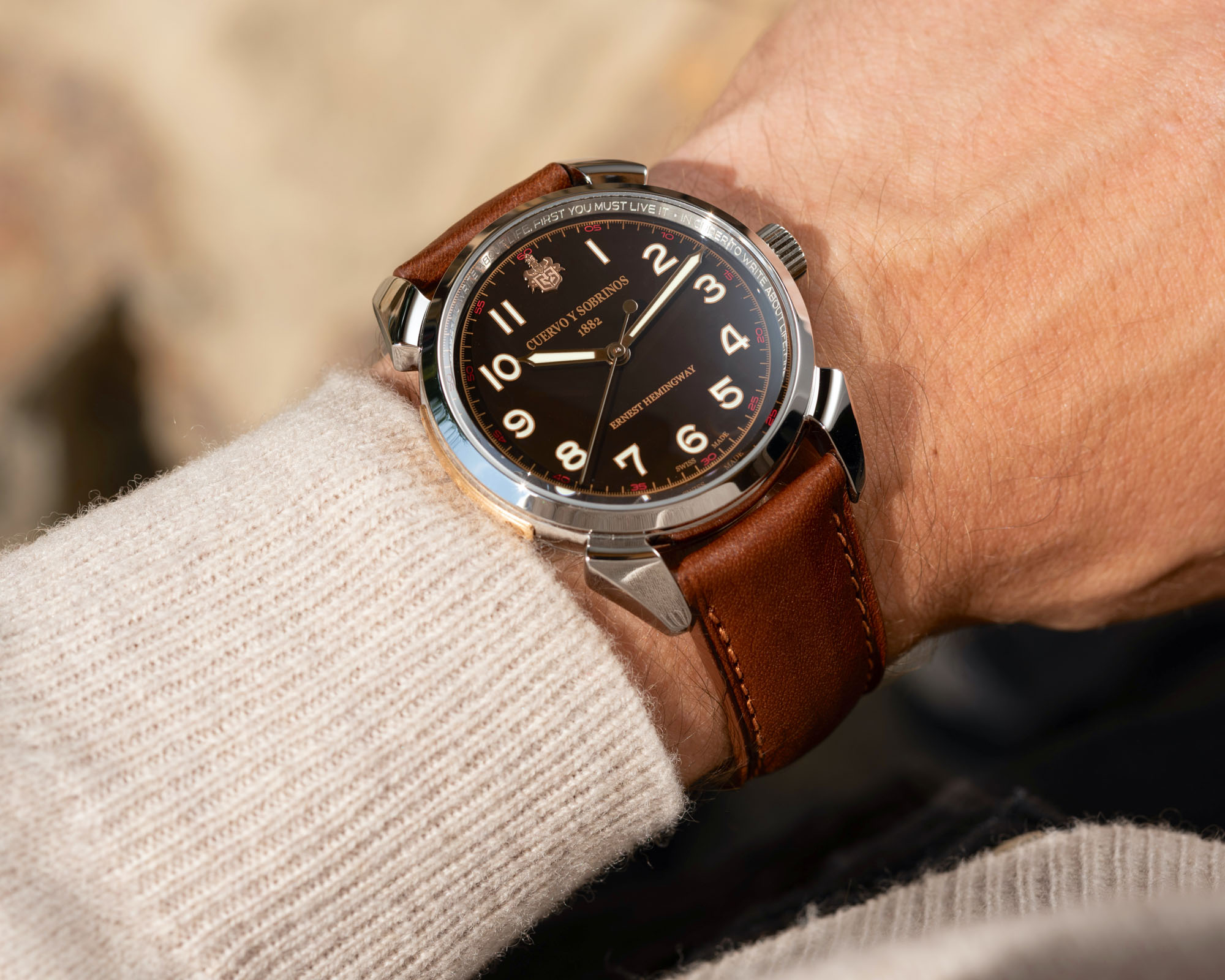 Based upon the brand’s Historiador watch design with its signature sculpted lugs, the case of the Cuervo y Sobrinos Historiador Hemingway is crafted from stainless steel and measures 40mm in diameter by 11.75mm-thick. Fitted to the top side of the case is a thin, smooth bezel that surrounds a double-domed sapphire crystal coated with an anti-reflective treatment. Attached to the reverse side of the watch is a solid screw-on stainless steel caseback that features an engraved Hemingway logo, while a signed screw-down winding crown helps provide the Cuervo y Sobrinos Historiador Hemingway with an ample 100 meters of water resistance. As an added tribute to the famous novelist and literary genius, the rehaut is engraved with a famous Ernest Hemmingway quote that reads, “In order to write about life first you must live it.” 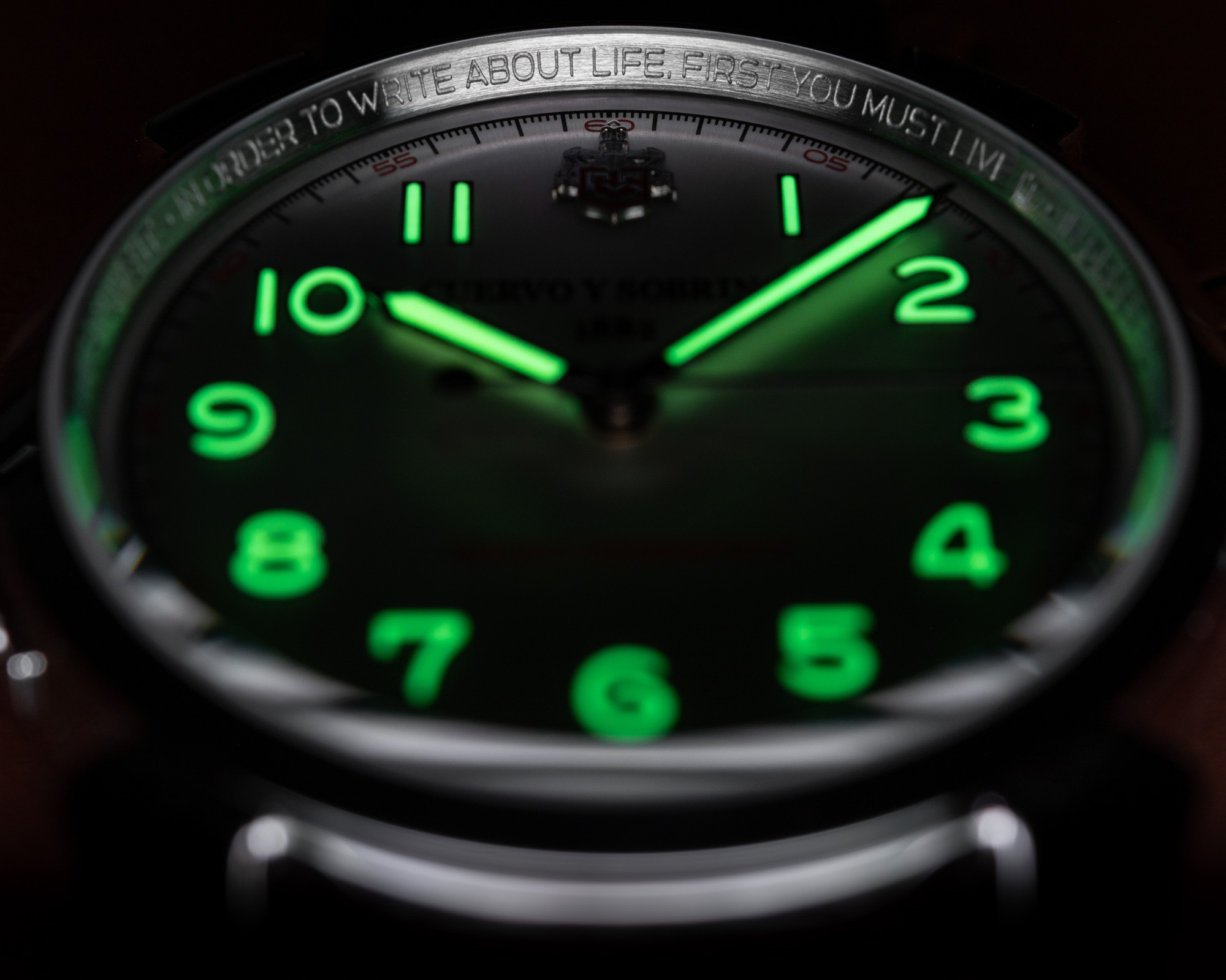 The new Cuervo y Sobrinos Historiador Hemingway collection consists of a total of four watches, and each one features a different dial color that draws its inspiration from the tones that would have surrounded Ernest Hemingway during his time in Cuba. The cream and brown dial versions are limited to 140 pieces each, while the other two models feature either black or silver dials and are exclusively offered together as a two-piece collector’s set that will be limited to just 30 worldwide. The black and brown dial models have 18k gold plates mounted to the side of their cases that display their limited-edition numbers, while the cream and silver dial examples have their limited-edition plates crafted from stainless steel to match the rest of their cases. 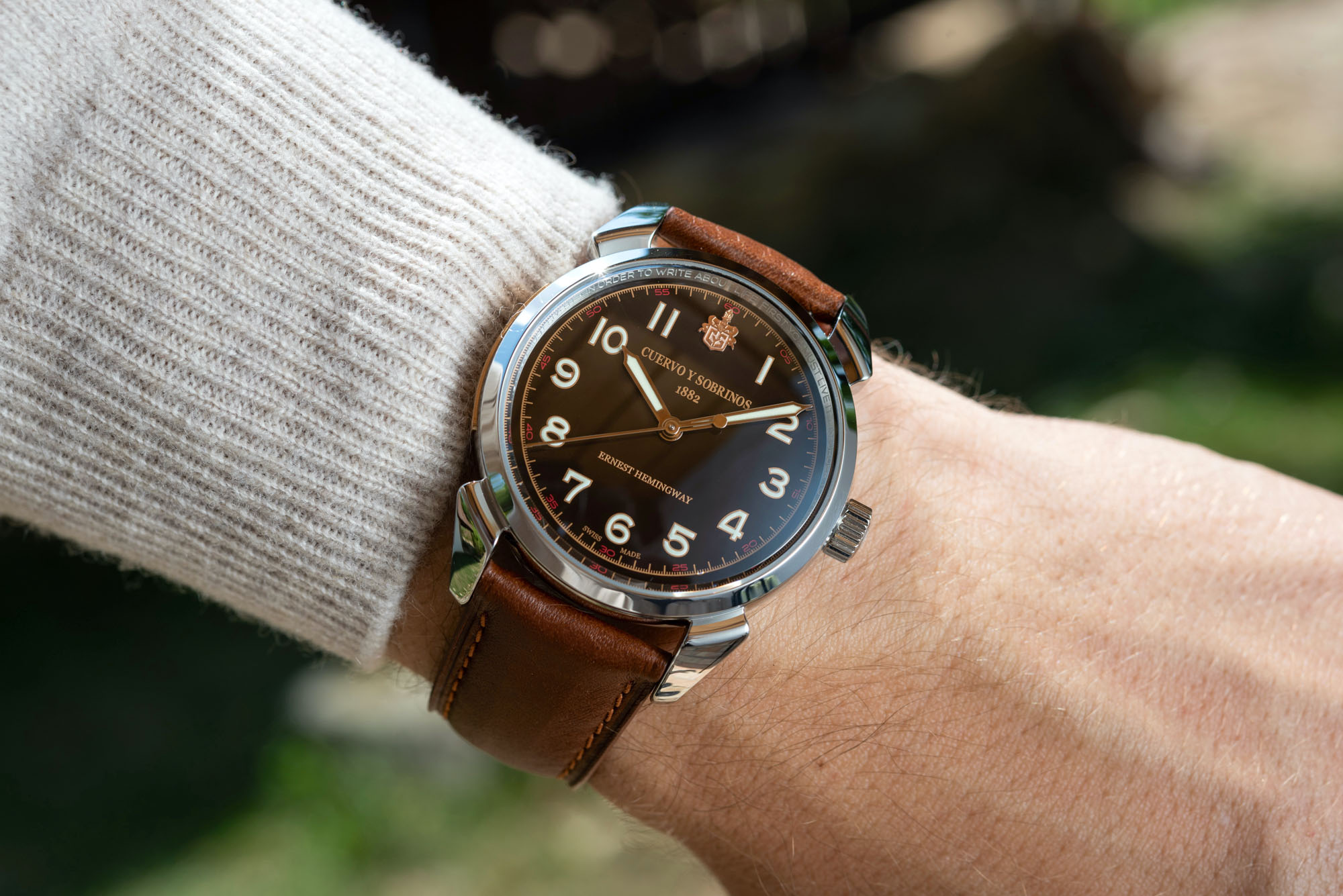 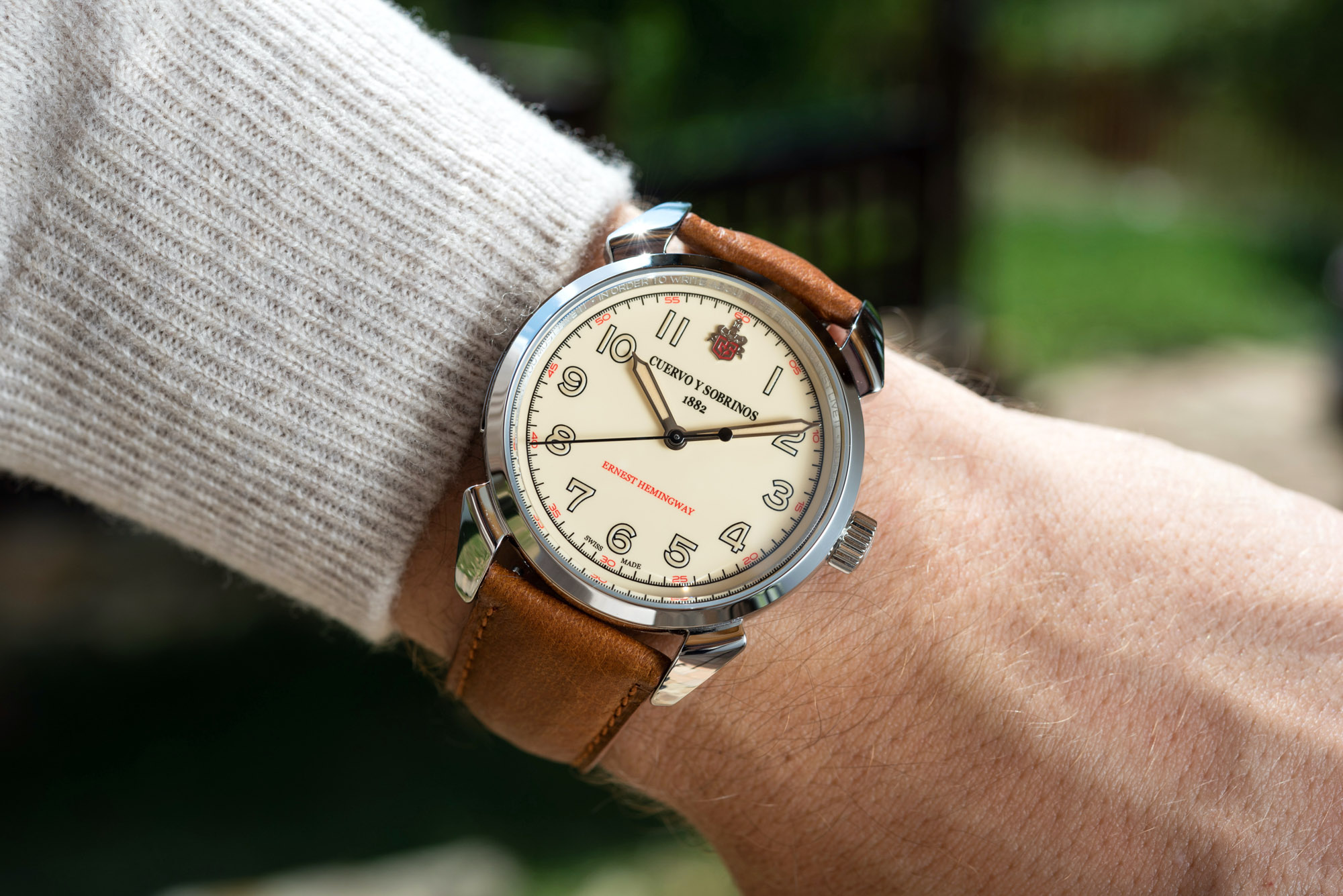 Regardless of their differences, all of the dials fitted to the Cuervo y Sobrinos Historiador Hemingway watches feature the same core layout with a clean time-only display, large Arabic numeral hour markers, a trio of centrally mounted hands, and a railroad-style minutes track with the “Ernest Hemingway” name in red letters on the lower half of the dial. Additionally, while the black and brown dial models feature white Super-LumiNova on their hands and hour markers, the silver and cream dial variants feature colored Super-LumiNova for a warmer vintage-inspired appearance. Furthermore, despite their differences in color and production numbers, all of the dials fitted to the Historiador Hemingway feature an applied Cuervo y Sobrinos logo in place of the 12 o’clock marker at the top of the dial. 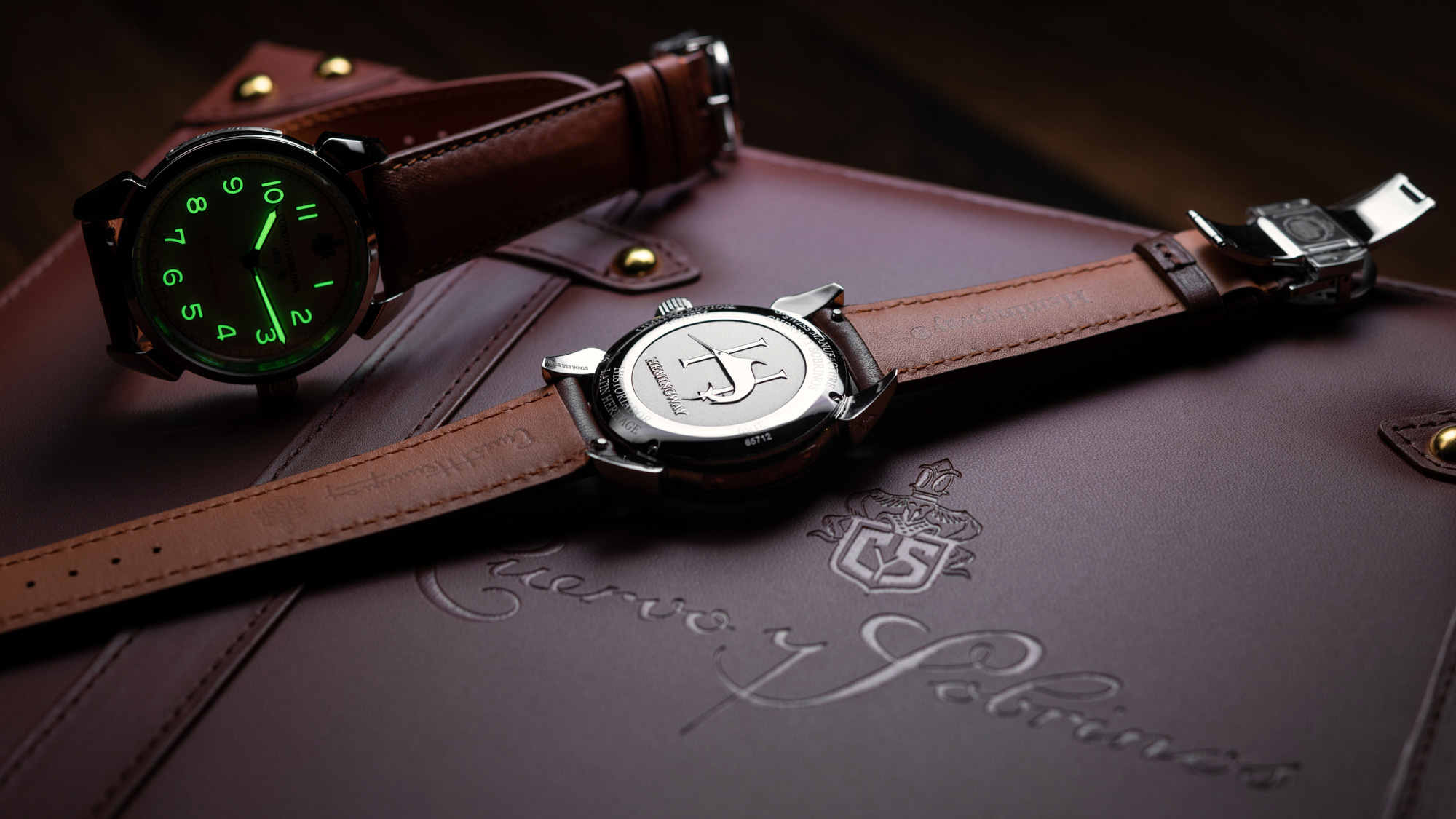 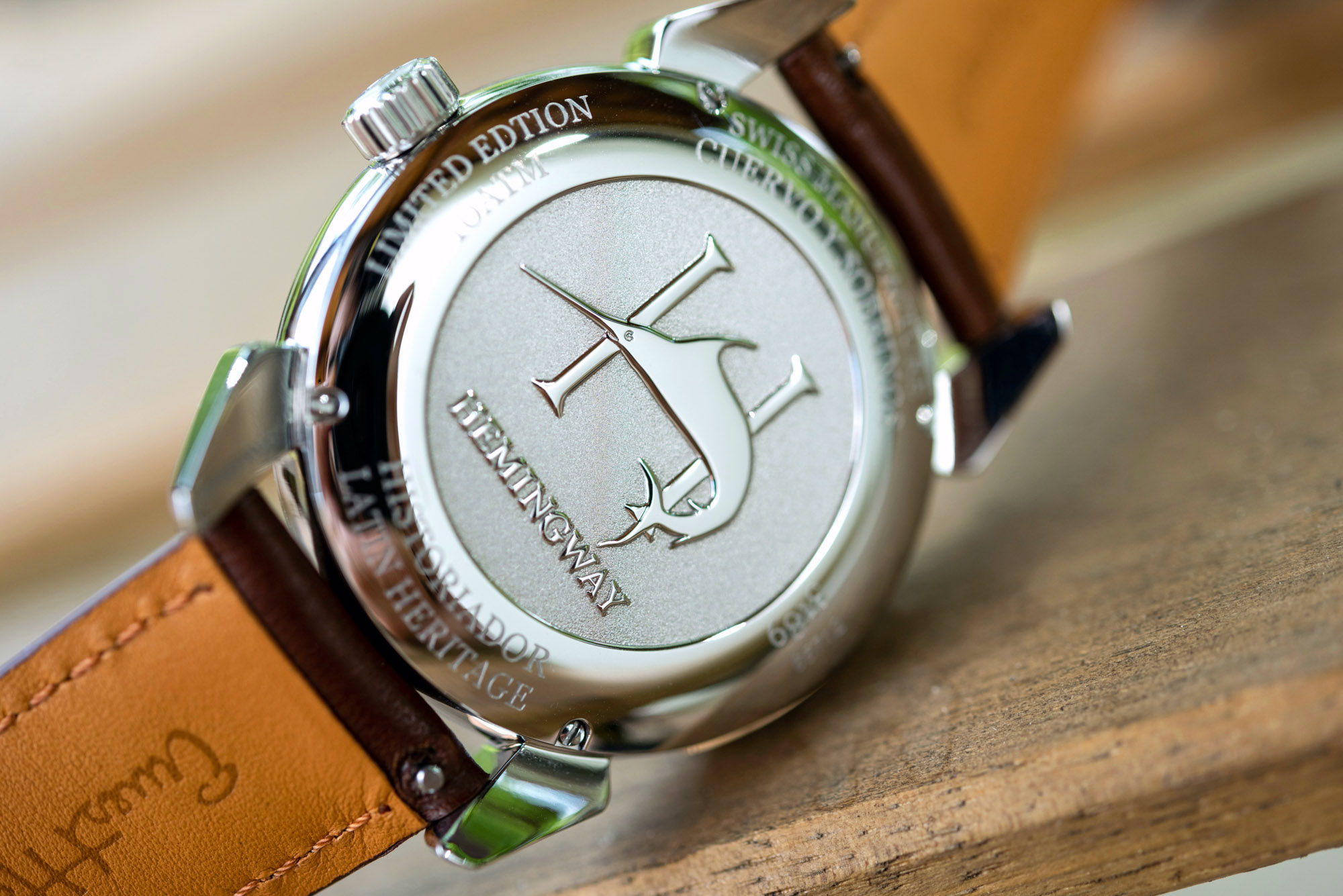 Powering the Cuervo y Sobrinos Historiador Hemingway and sitting hidden below its solid screw-on caseback is the CYS 5121 automatic movement, which is based on the popular Sellita SW200. Running at a frequency of 28,800vph and offering users a power reserve of approximately 38 hours, the Swiss-Made CYS 5121 movement also features a custom engraved oscillating weight. A proven design with a reputation for reliable timekeeping performance, the familiar nature of the CYS 5121 movement means that it has the ability to easily be serviced by any qualified watchmaker or repair center in the entire world. 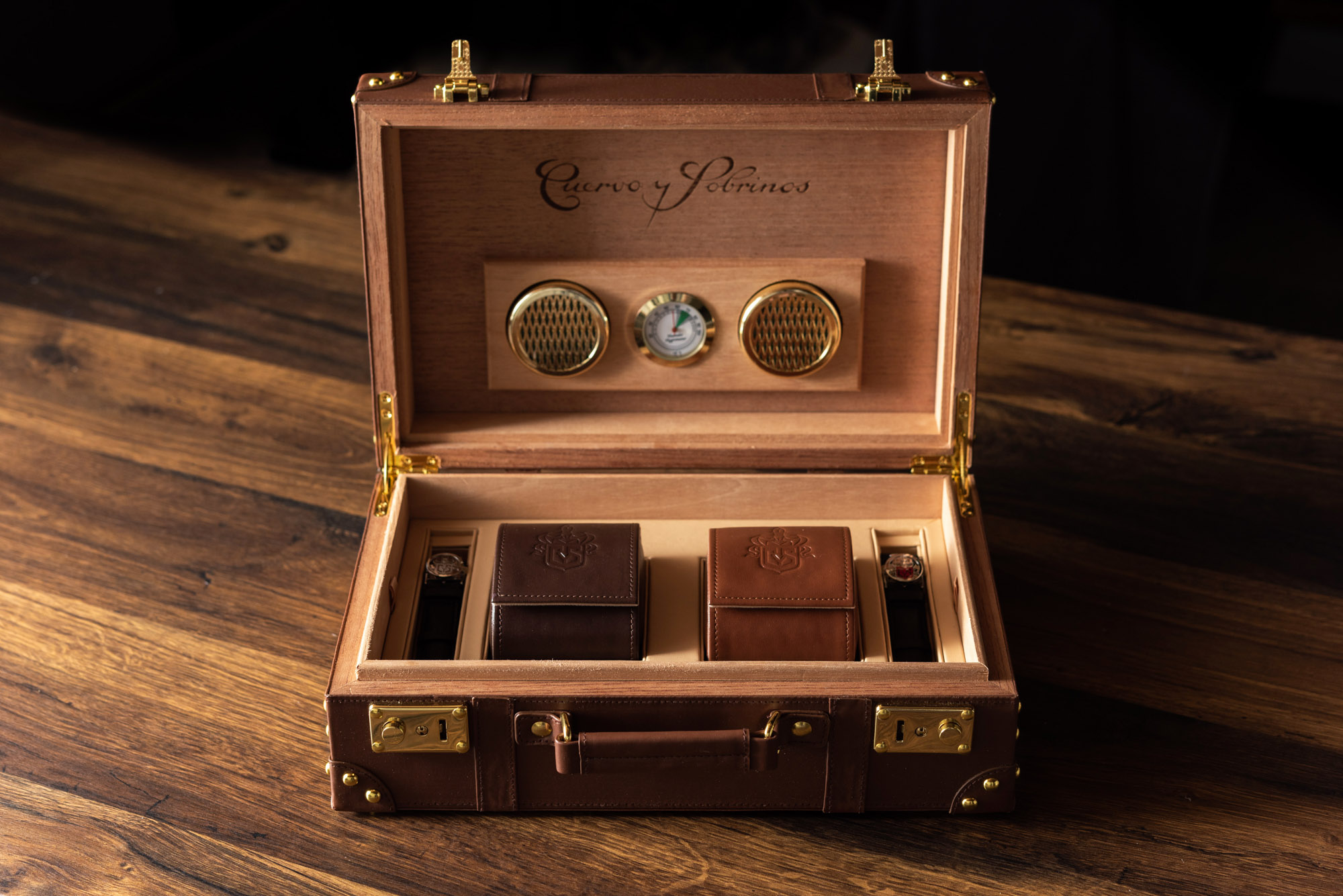 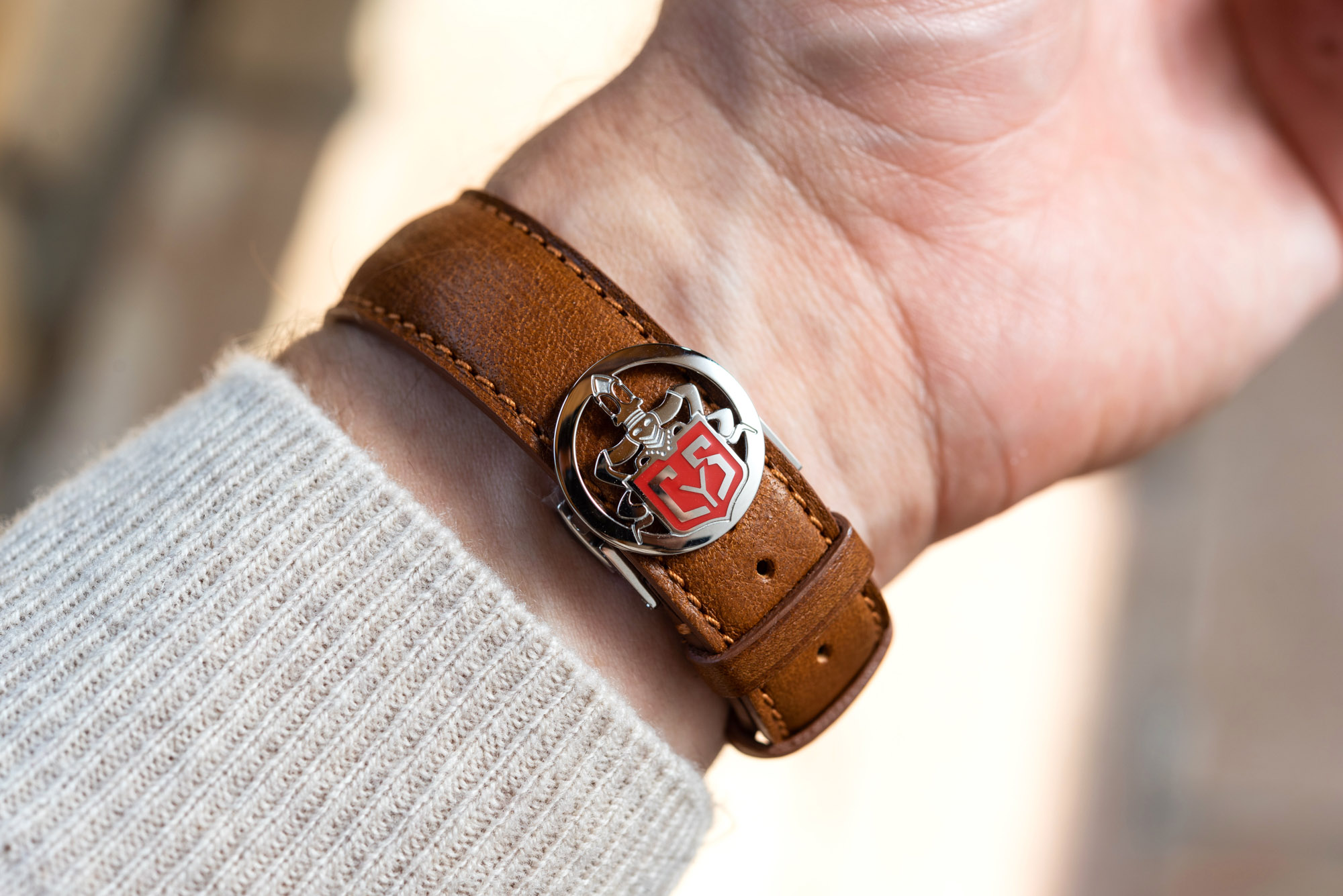 When it comes to straps, both the silver and cream dial models are fitted with light brown leather straps, while the black and brown dial versions receive straps made from dark brown leather. Additionally, the 30-piece limited edition collector’s set that includes both the black and silver dial models includes two additional black leather straps, and all of the various strap options for the Historiador Hemingway include double push-button, butterfly-style deployant clasps that are signed with an engraved and open-worked Cuervo y Sobrinos logo. 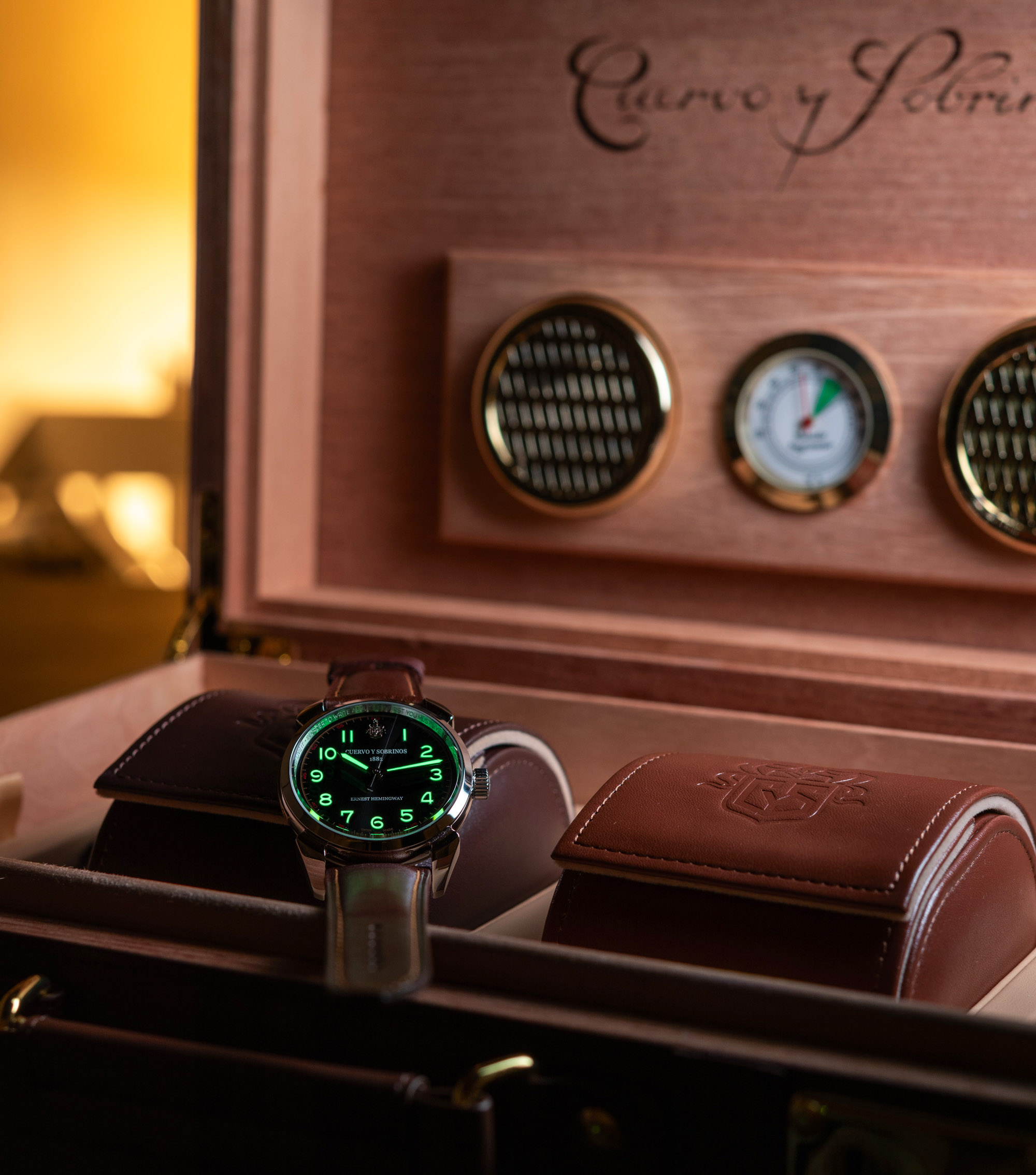 Additionally, since the brand has always been against the idea of wasteful and unwanted packaging, Cuervo y Sobrinos sells its watches inside fully functional humidors as a nod to one of Cuba’s most famous luxury products: fine cigars. The two 140-piece limited edition watches that are fitted with either brown or cream dials come in a special-edition wooden humidor that has an Ernest Hemingway logo on the top side, while the 30-piece collector’s set is packaged in an exclusive leather-wrapped travel humidor chest that can be used to either store both watches and their included alternate straps, or it can serve as a luxurious travel humidor for transporting a collection of premium cigars. 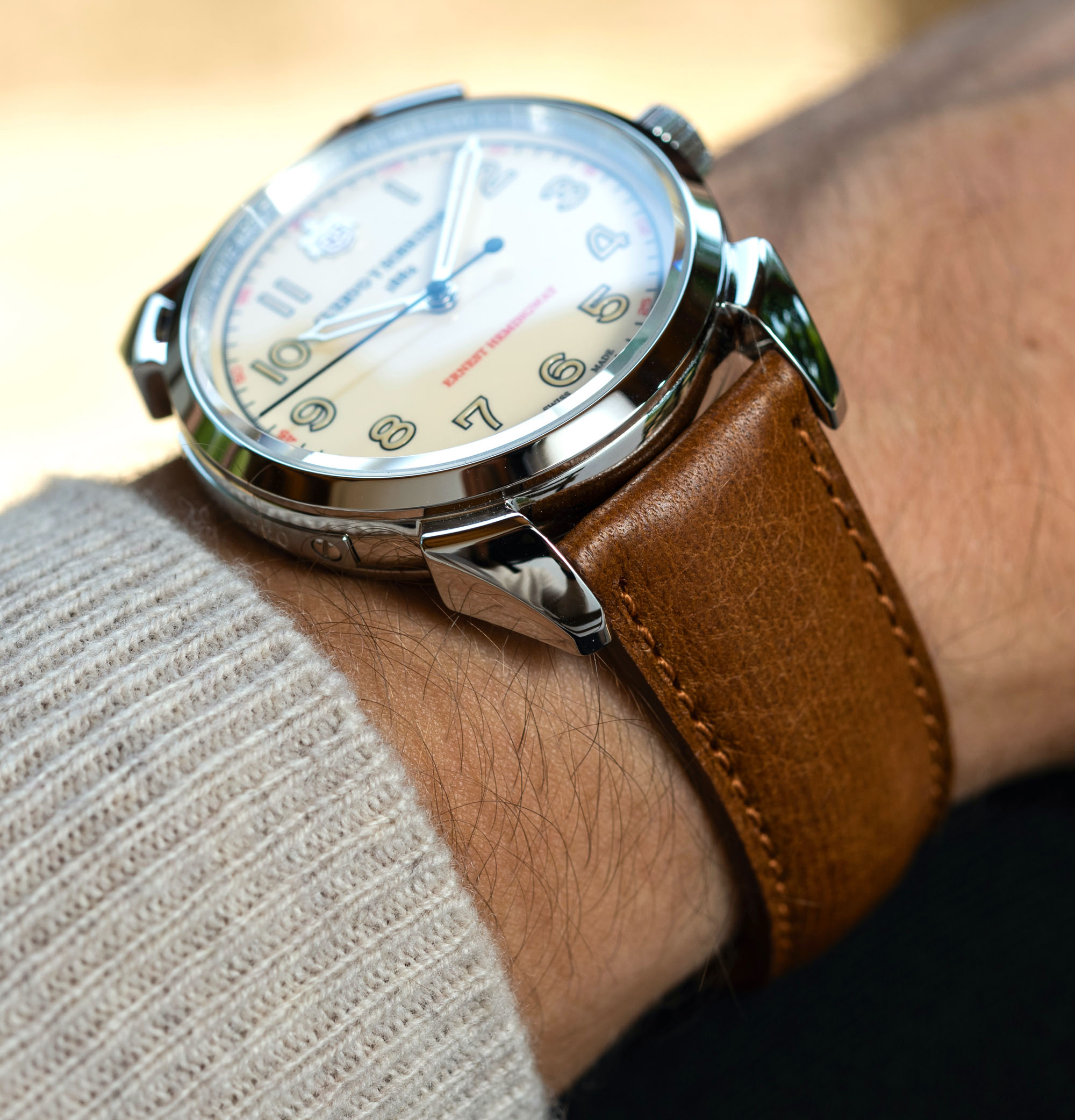 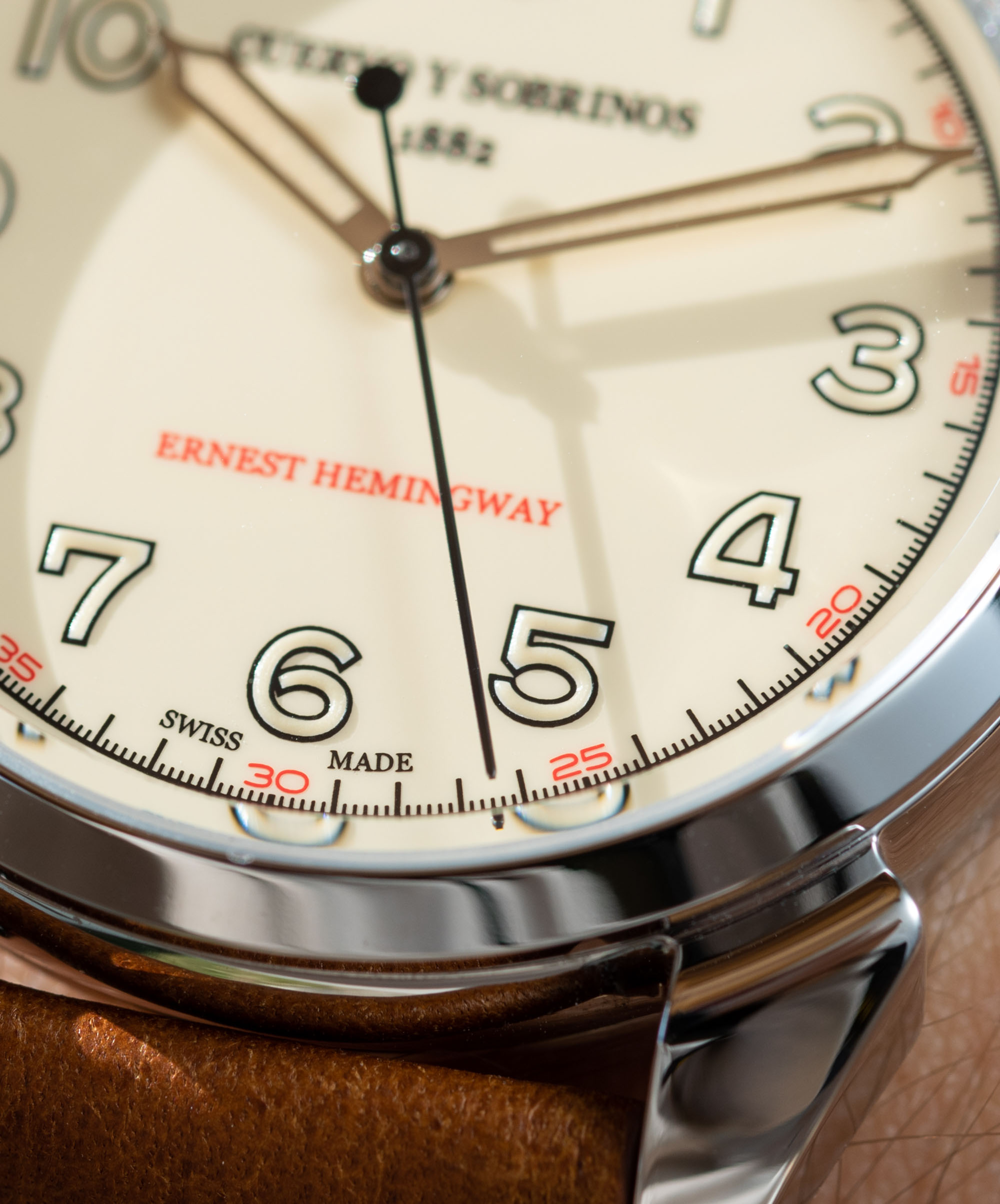 Ernest Hemmingway is often considered to be one of the great American writers, but he actually spent a significant portion of his time living in Cuba between 1939 and 1960. For more than 20 years, Hemmingway would travel to Cuba with his family to escape the cold Idaho winters, and it was here where he wrote iconic classics such as Islands in the Stream, A Moveable Feast, and The Old Man and the Sea. During his time in Cuba, Ernest Hemmingway was a familiar face at the Cuervo y Sobrinos boutique, and now the historic brand honors its former patron and literary legend with a collection of watches that honor his life and his love for the city of Havana. 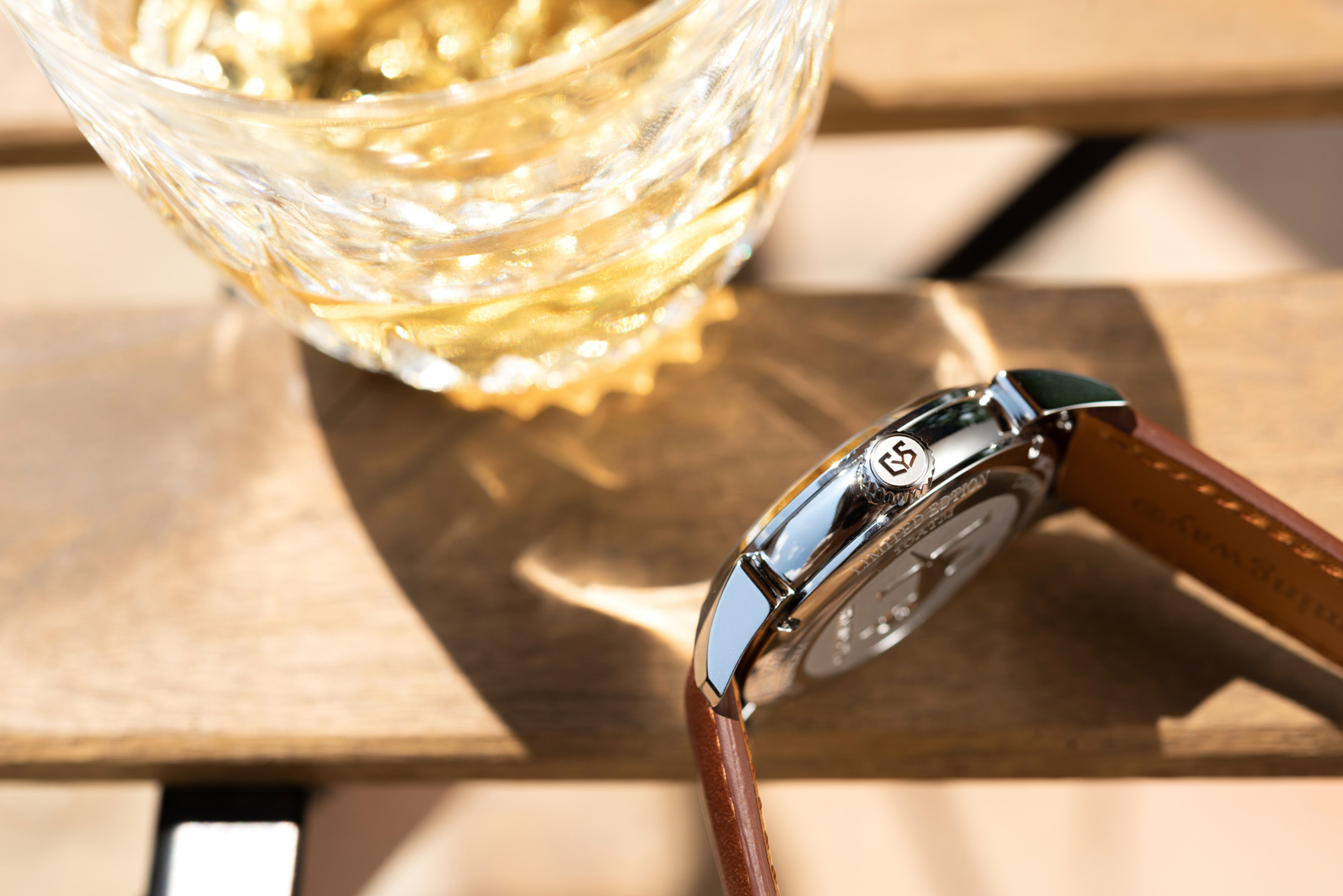 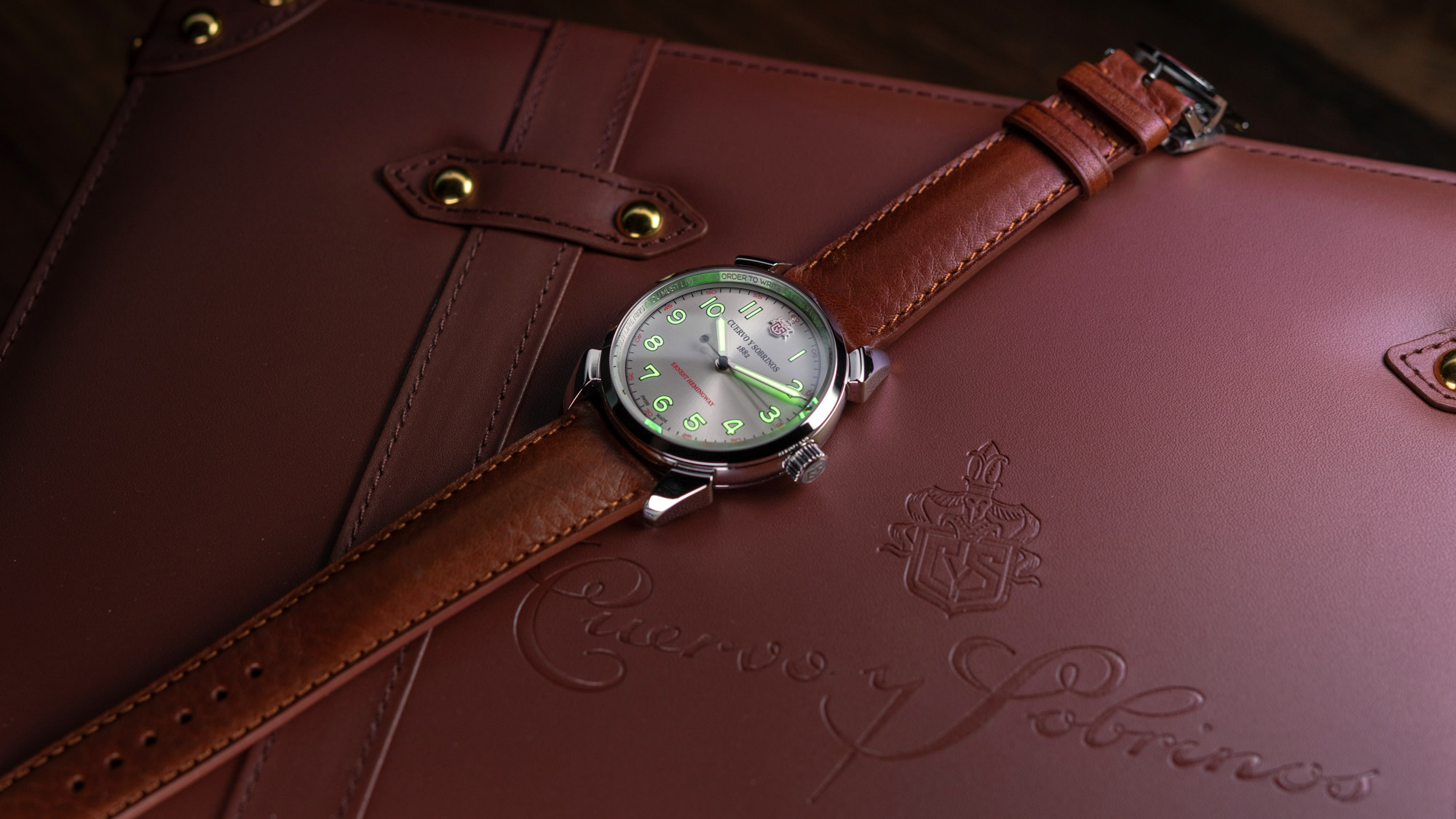 Retail prices for the two 140-piece limited-edition Cuervo y Sobrinos Historiador Hemingway models are CHF 2,500 for the cream dial version and CHF 3,000 for the brown dial model, with the difference in price a direct result of the use of solid 18k gold for the limited edition plate on the side of the case. The 30-piece limited edition collector’s set that includes both the black and silver dial Historiador Hemingway models, along with the two alternate black leather straps and travel humidor case is accompanied by an official retail price of CHF 6,000. These new models from Cuervo y Sobrinos are the first Swiss watches to be officially licensed by Hemingway Limited, which was founded by Ernest Hemingway’s eldest son, Jack, in 1988 and preserves the legacy of his father’s name. For more information, please visit the manufacturer’s website.