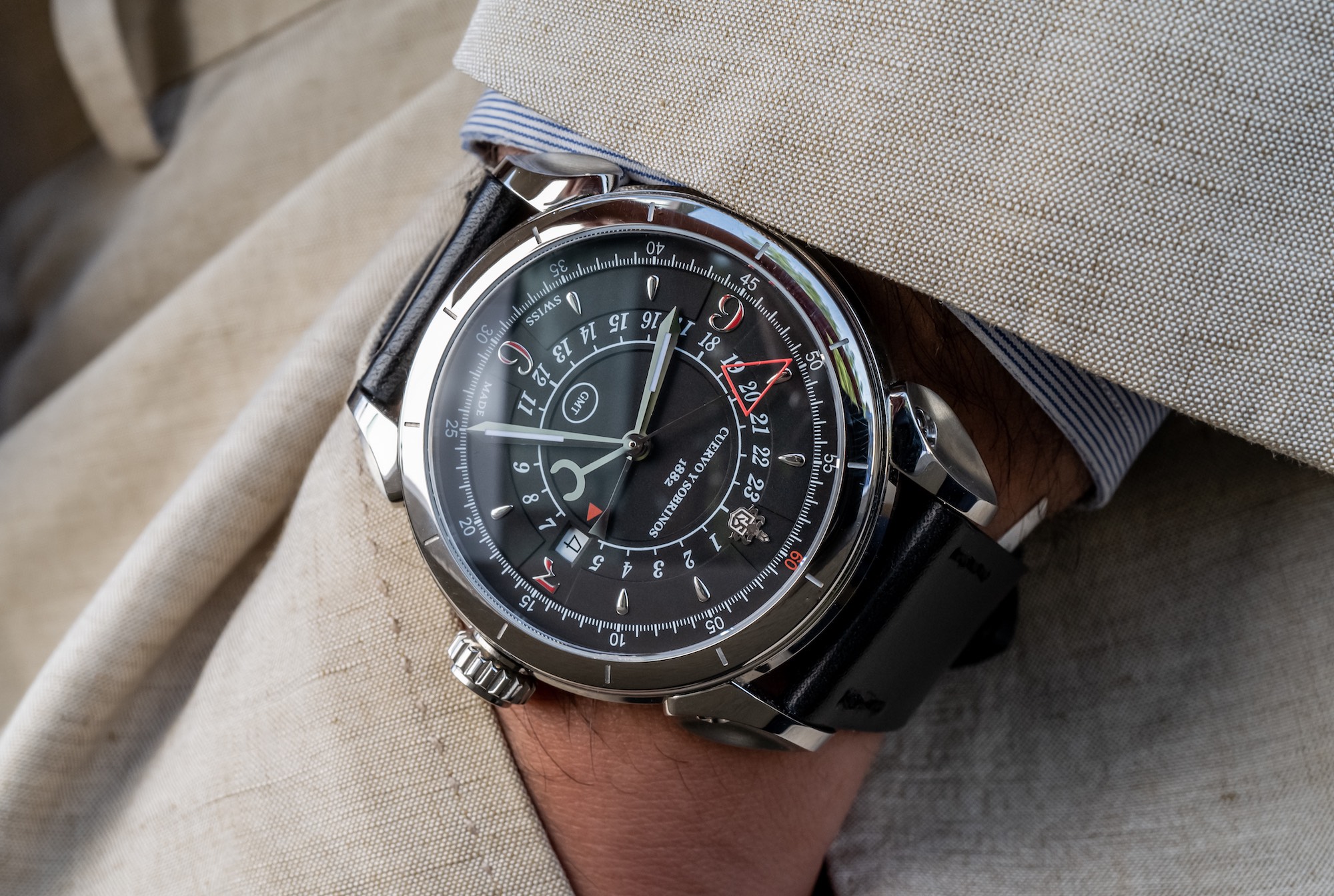 The Cuervo y Sobrinos Vuelo GMT isn’t a new model, but rather just a watch that caught my eye from a brand that’s always evaded closer inspection. The Swiss brand with Cuban history and “Latin DNA” creates some pretty impressive cases that house unrestrained design exuding personality. It’s anything but generic, and the brand doesn’t seem to mind the divisiveness that goes along with that. You may not guess it at first, but the Vuelo is the brand’s more “contemporary” collection that aims for the sportier side of elegant. Some other Vuelo lines hit the “sporty” side more than the GMT, such as the Domino Rosillo. Categorizations aside, I went from initially indecisive to a legitimate fan of this flamboyant and very well-made travel watch from Cuervo y Sobrinos. 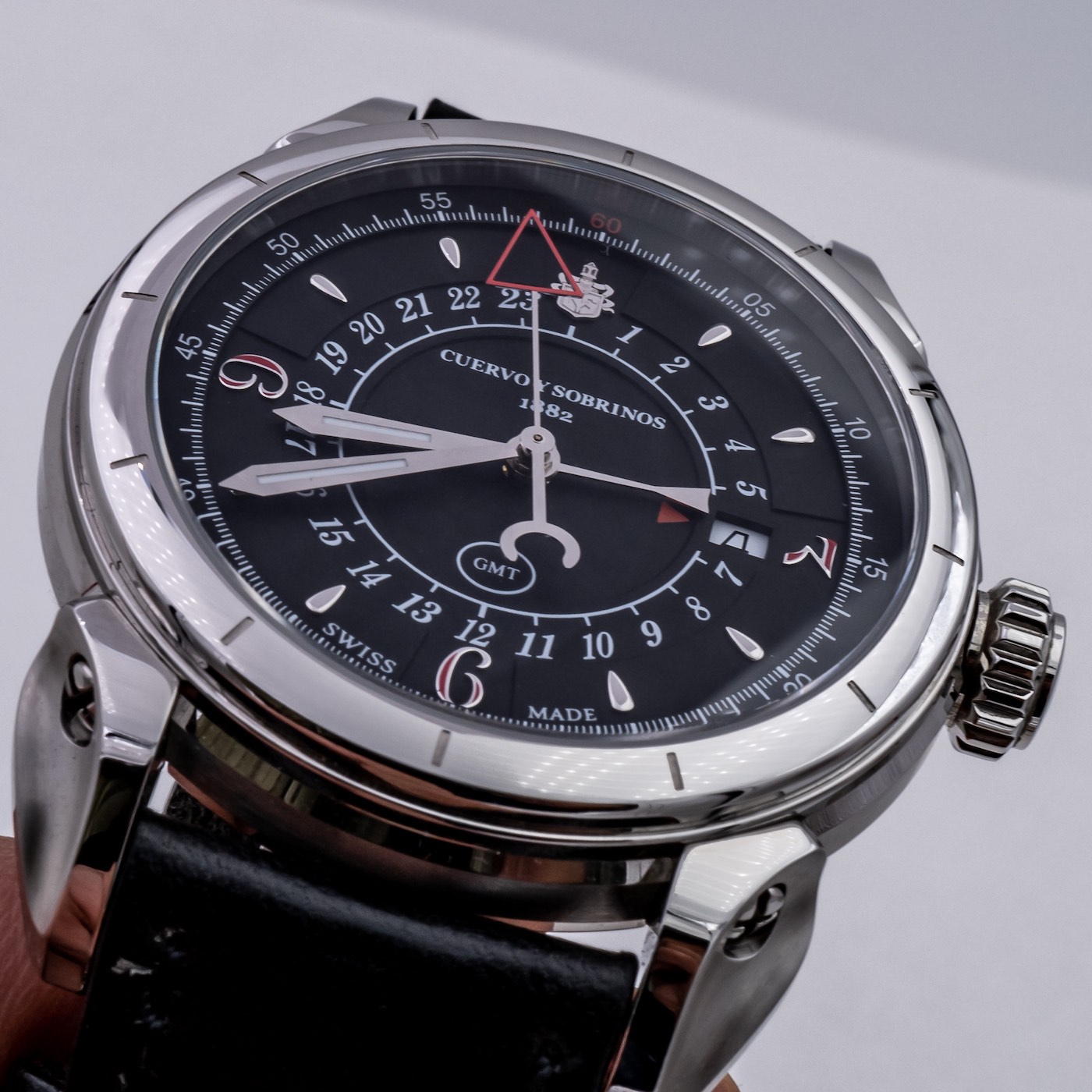 The Cuervo y Sobrinos design ethos is about as far as one can get from the pathological minimalism that’s run rampant in contemporary watch design. The word “flamboyant” is apt when looking at the case and dial of the Vuelo GMT. In fact, I couldn’t help but think of some of the form-over-function classic automobiles known as “Yank Tanks” that are so common in Cuba. Anyone remotely familiar with Cuba knows that American classic cars from the 1940s and 1950s are everywhere, after many decades of car scarcity following 1959 due to the U.S. embargo after the fall of the Batista government.

It’s somewhat important to note that Cuervo y Sobrinos isn’t, and wasn’t, a Cuban-made watch. The story of the brand can be told in two chapters, the first of which runs from 1882 to approximately 1965, which marks the period between the boutique opening in Havana through the time right around 1965. The events of the 1959 revolution are what caused Cuervo y Sobrinos to suffer and essentially disappear for about four decades. 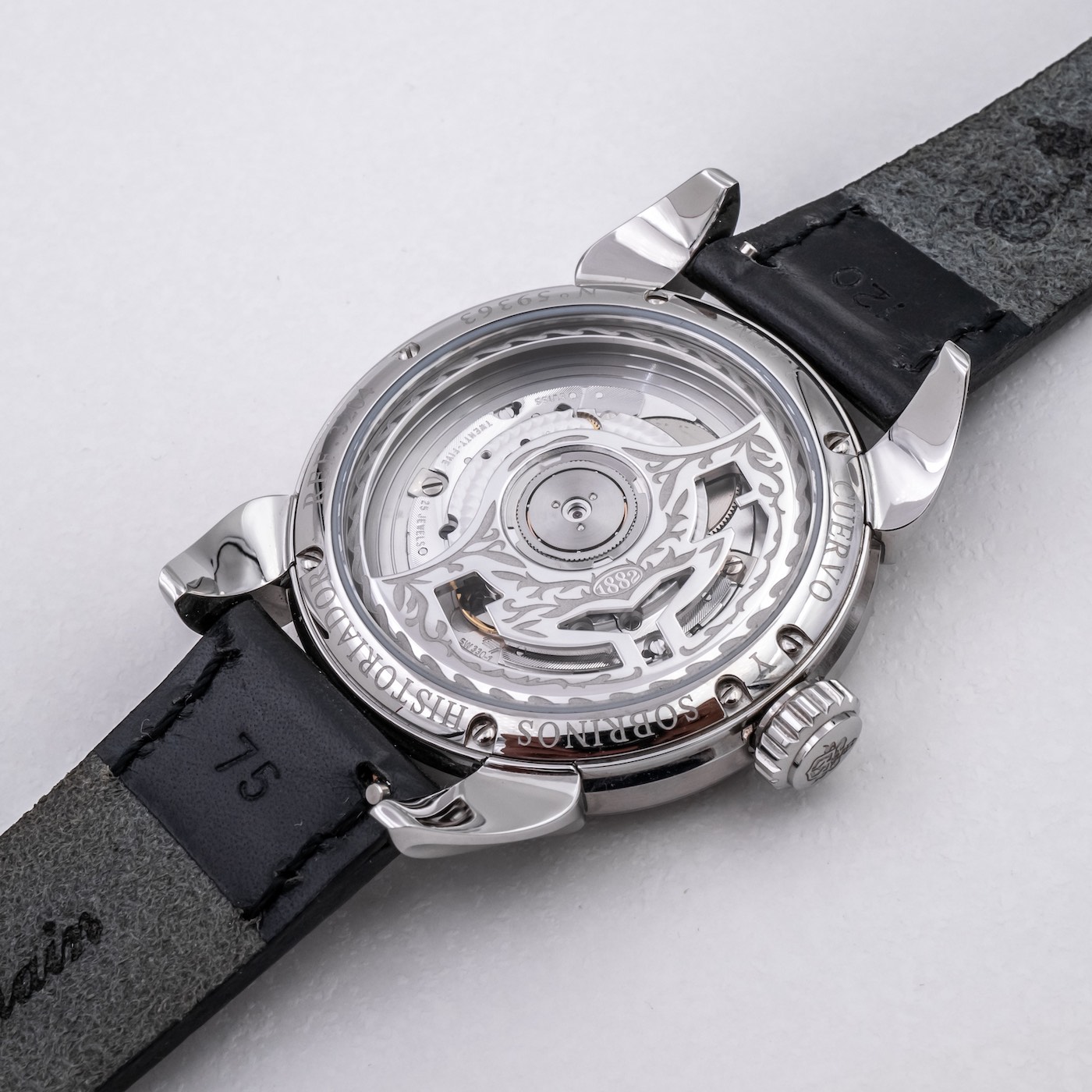 The second chapter begins around 1998 and runs to the present day.  When the brand was revived by Marzio Villa around the early aughts, he relaunched it from Switzerland, and it wasn’t until 2009 that the brand again had a presence in Cuba when they opened a boutique and shop across the street from their original location. In 2018, Cuervo y Sobrinos was purchased from Marzio Villa by a group led by Massimo Rossi, who had been involved with the brand for some years. They relocated the headquarters and production to Le Noirmont in the Swiss Jura.

The curves and soft recessing of the lugs are stamped with a large screw affixing each of the four to the case of the Vuelo GMT. Even though the Vuelo is more associated with aviation (the word does mean “flight” in Spanish, after all) the curves and scoops of this warm-industrial aesthetic immediately recall some of those old Ford, Buick, and Chevy cars we see in so many photos. 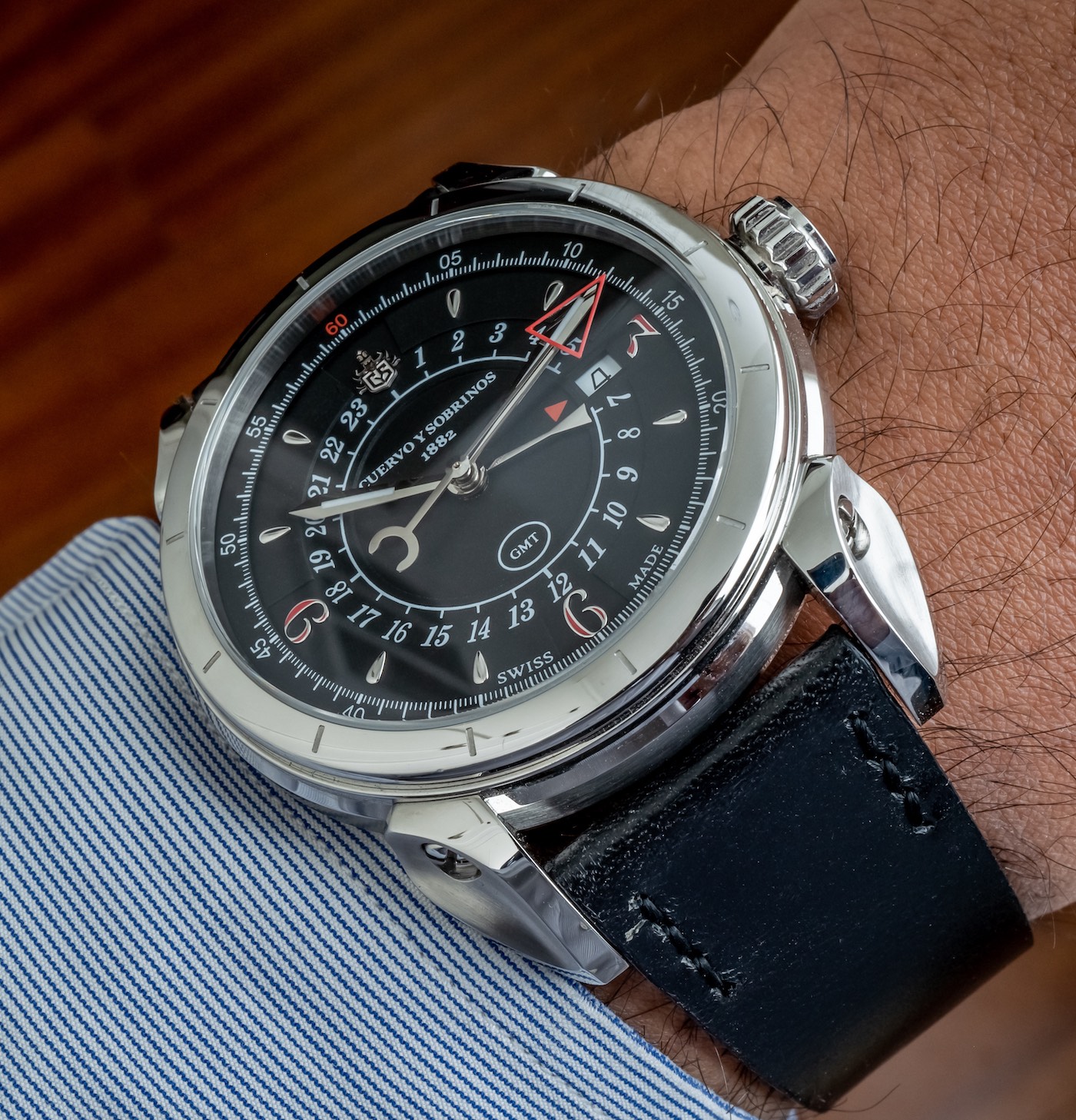 The 44mm-wide and 15.15mm-thick case does wear on the larger side with a lug-to-lug measurement of just around 56mm. The case is otherwise quite well-done with alternating brushed and polished finishes, and I again want to point out how nice the lugs are. They are certainly not for everybody (and I could do without the plate reading “Vuelo” on the left side of the case), but they’ve got a distinct personality and a style that is executed meticulously. That’s saying a lot these days as we’ve seen the proliferation of cookie-cutter design. The sapphire crystal on the dial and exhibition caseback is done with ample AR coating and glare isn’t much of an issue, thankfully. The crown isn’t screw-down, which plays a role in the passable, but certainly not worry-free, 30M water resistance. 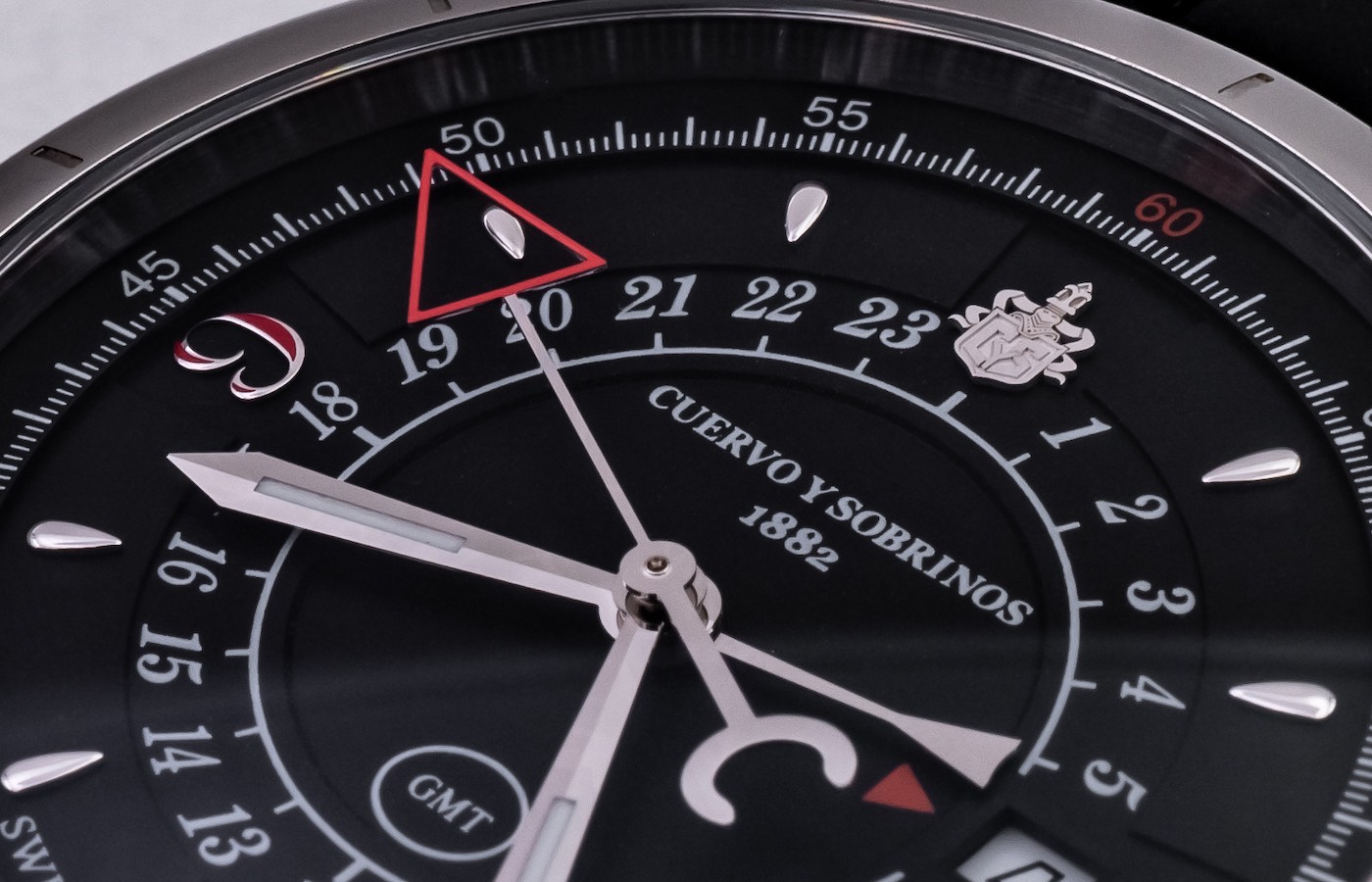 The dial has a lot of that Cuervo y Sobrinos flair that isn’t shy about its use of stylized fonts and shapes. Fortunately, by sticking to black, red, and white along with the silvery applied indices/numerals, everything is actually very easy to read and totally legible. The black dial makes the various levels of the rings a bit hard to appreciate in photos, but it does add that extra level of finish to the Vuelo GMT. 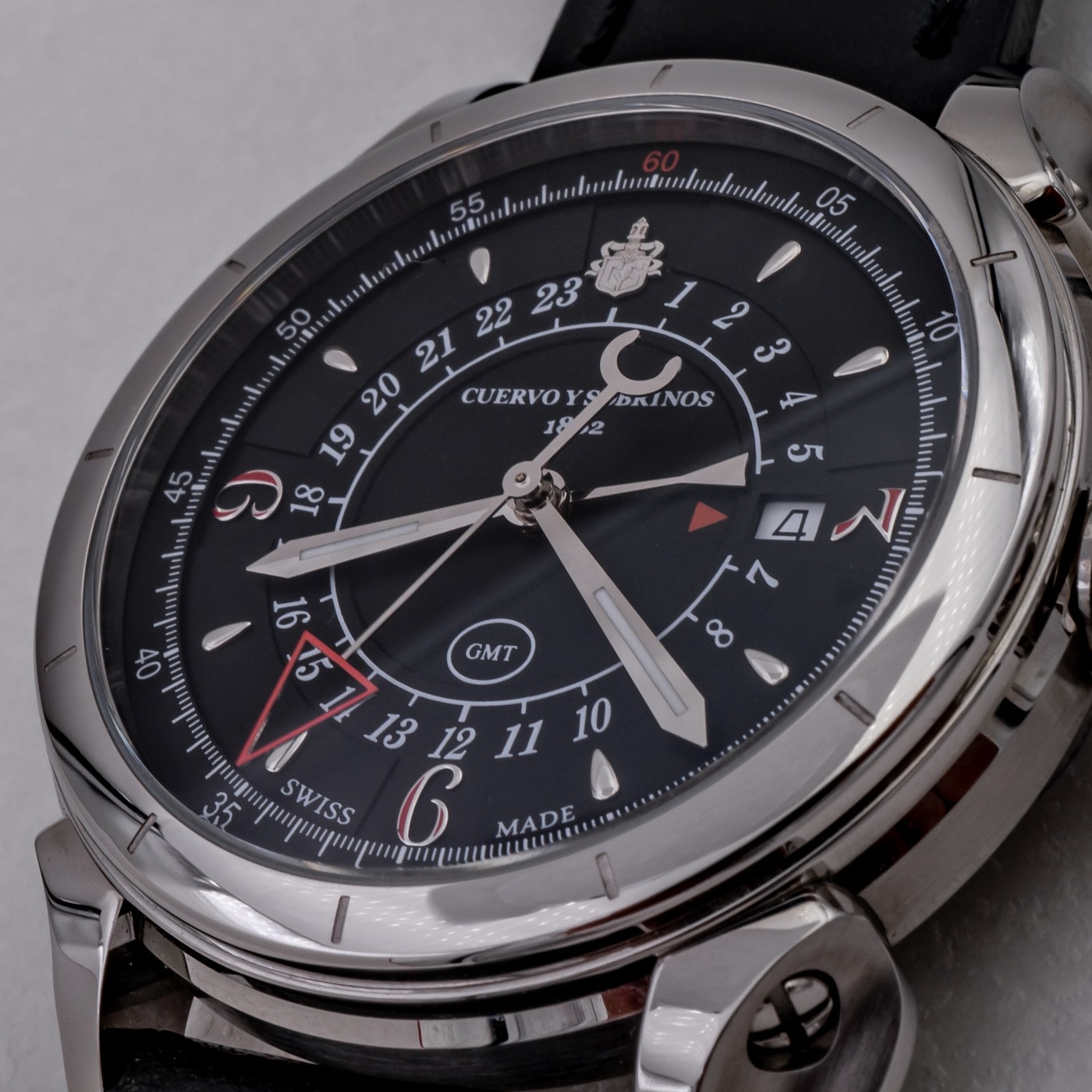 I did initially assume the seconds hand with its skeletonized red triangle was the GMT hand until a brief closer inspection showed that it’s both too long and large to play that role. Such a top-heavy seconds hand isn’t one that I’m too used to seeing and, while I appreciate that it frames the Cuervo y Sobrinos logo at 12 o’clock, I couldn’t help but imagine the dial layout with a more subdued seconds hand. 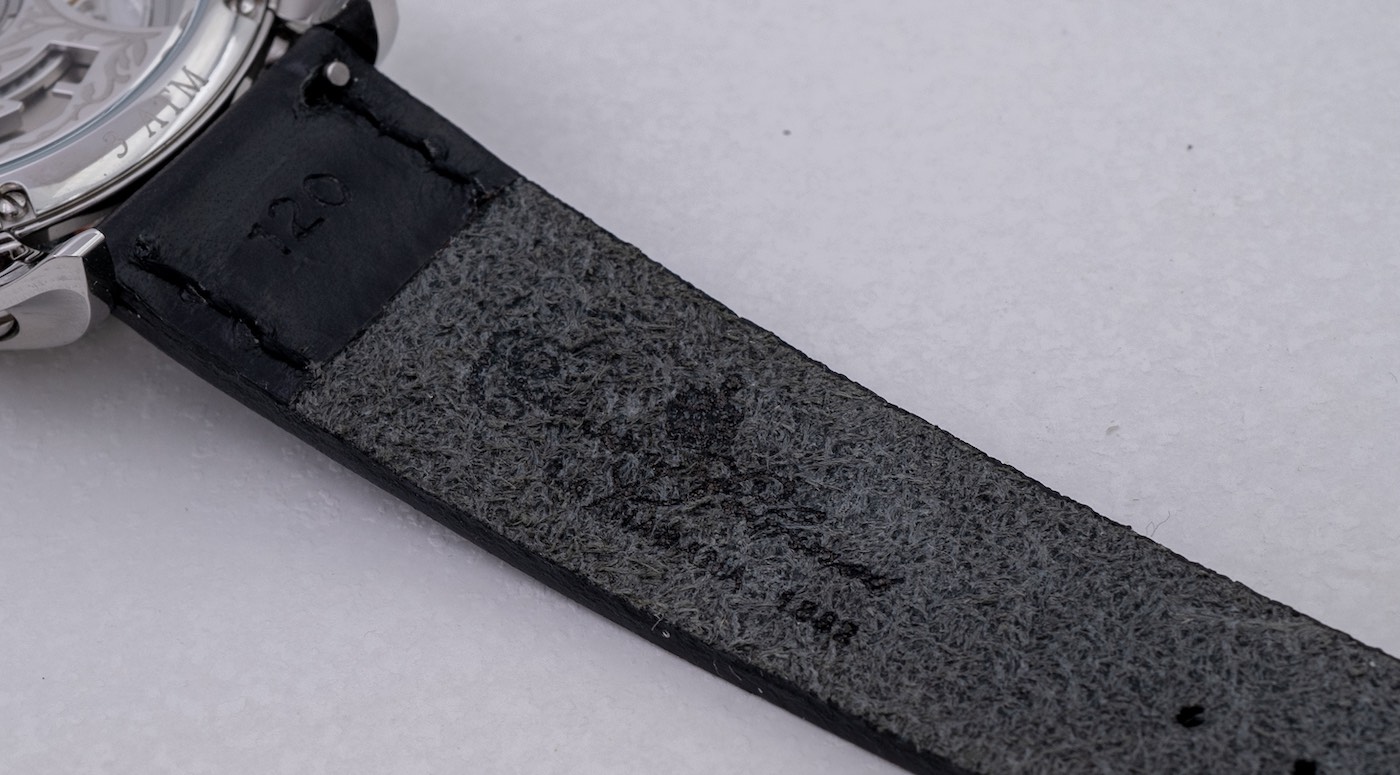 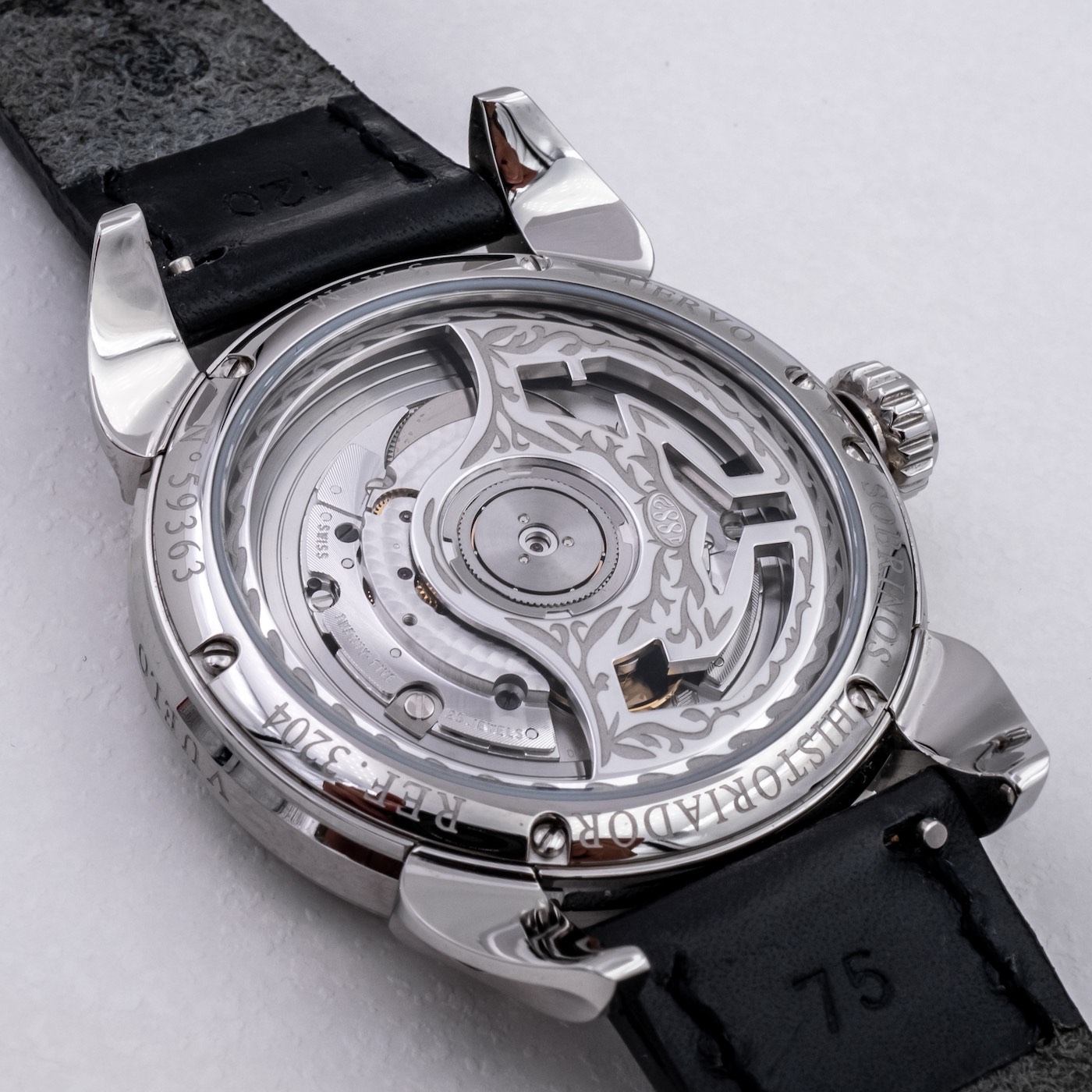 Turning the Vuelo GMT over reveals the exhibition caseback, with a view of the CYS 5123 movement, which is based on the Sellita SW 330. Cuervo y Sobrinos certainly are more focused on design and finishing rather than upping costs by getting pulled into highly modified or in-house movements. On several occasions, brand head Massimo Rossi has said he does not want to go past that ~$2000-$8,000 range, and the use of third-party movements is a major factor here. Operating at 28,800vph and with a 42-hour power reserve, the Vuelo GMT gets the job done. Now, there is finishing done on the rotor which the brand refers to as “fan decoration.” It’s nicely done, but I may actually prefer to not have it there since it too closely verges on tribal tattoo for my taste. 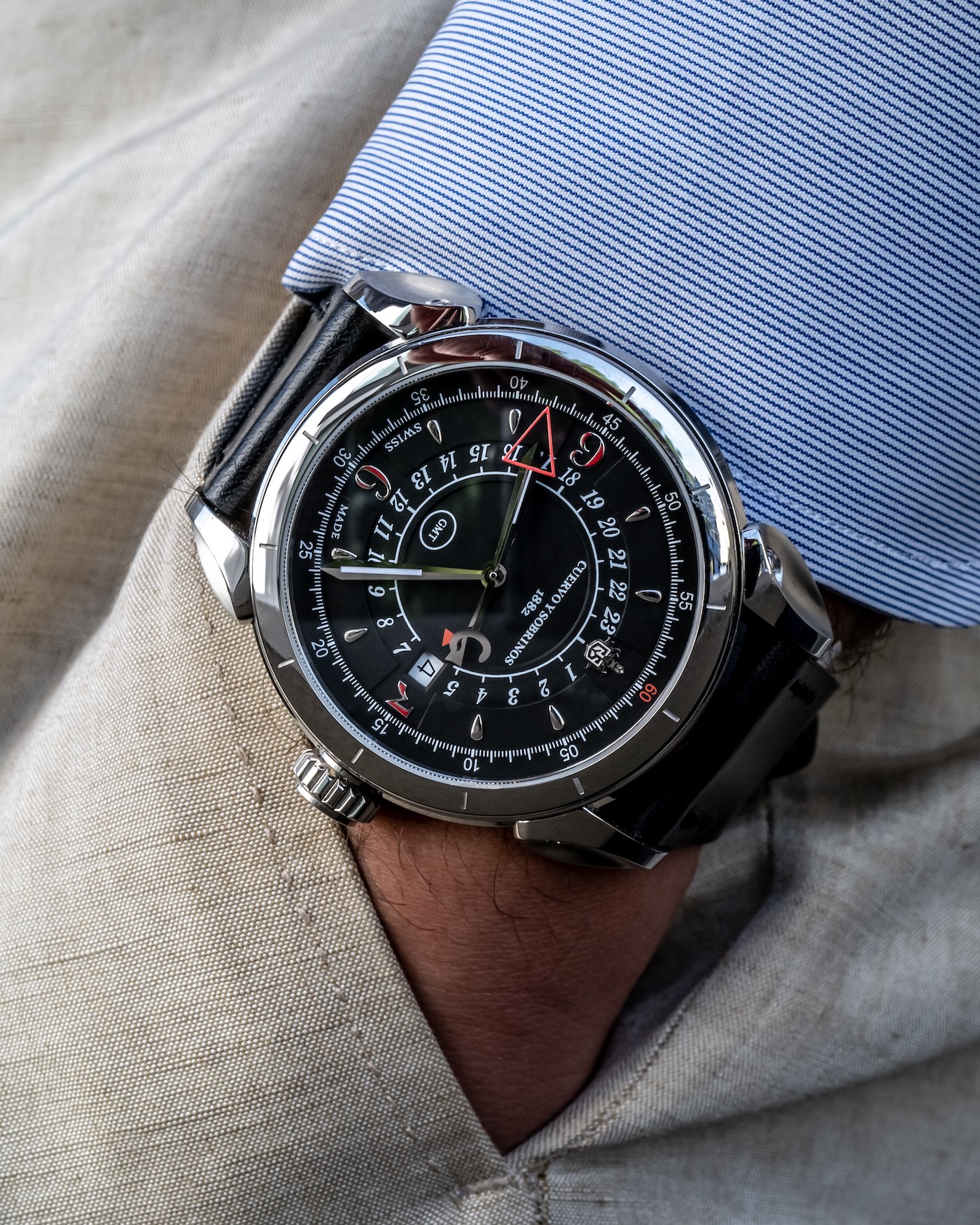 It’s not easy to achieve so much personality without coming off as desperate or starved for attention, but Cuervo y Sobrinos pulls it off with some impressive case finishes to boot. I have a lot of respect for a brand that doesn’t go wherever the wind blows. The Cuban design DNA is very strong in all of their watches, the Vuelo GMT included. That may turn some people off, but it’s clear that this low-production watch brand isn’t trying to appeal to a wide group of buyers. I’m glad I took the time with the Vuelo GMT, and I suggest that anyone slightly enamored with it go and check it out in person because the finishes and case need to be held as well as seen. The Cuervo y Sobrinos Vuelo GMT is priced at 4,950. CHF. You can learn more at cuervoysobrinos.com.