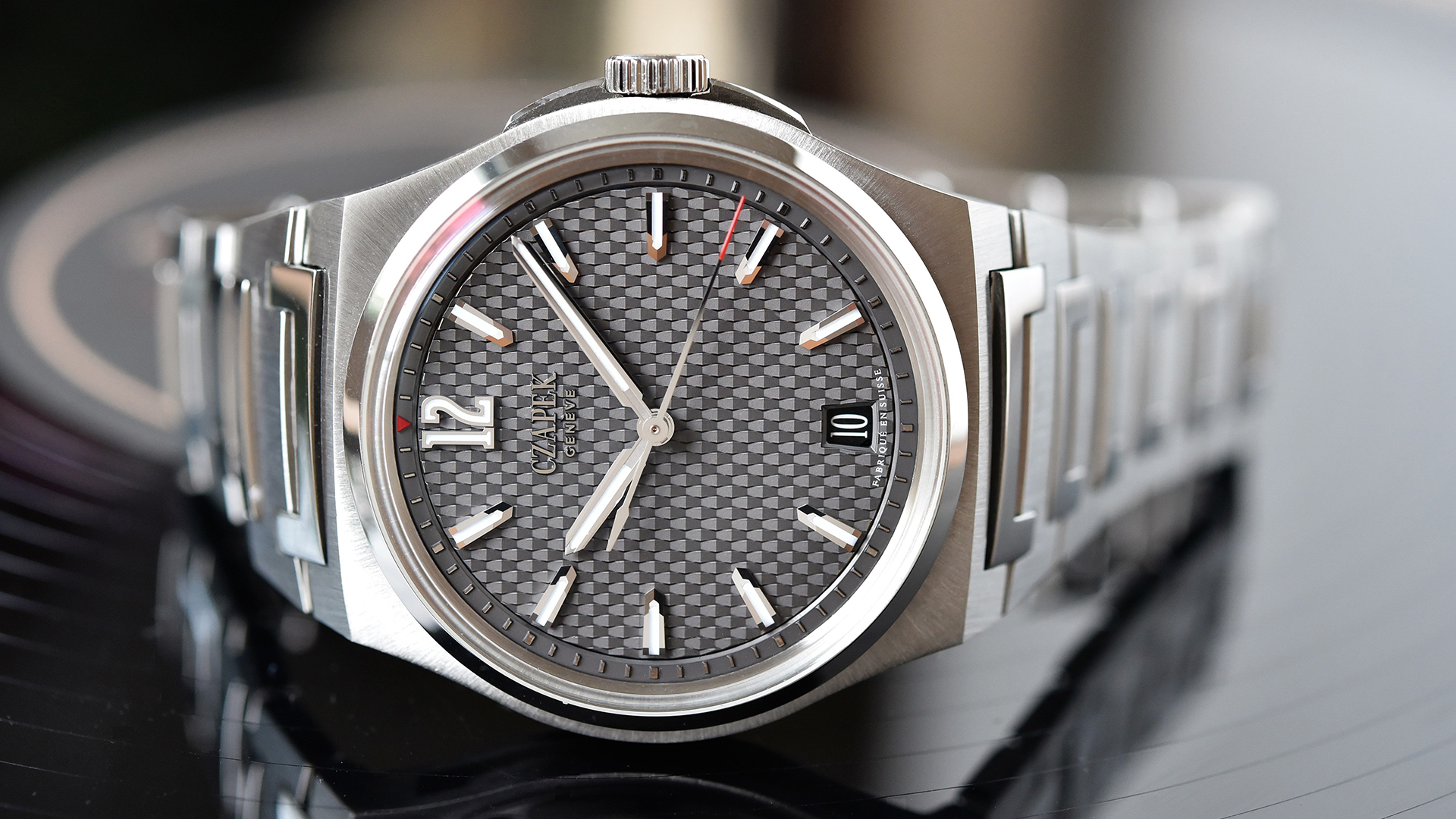 Over the past several years, the integrated bracelet luxury sports watch segment has become one of the most hotly contested niches in modern horology, with a wide array of brands developing entries to claim a share of the segment’s fervent consumer interest. One of the relative dark horses in this race is Czapek & Cie, which first unveiled its integrated bracelet Antarctique line in May 2020. As 2021 begins to loom on the horizon, the brand has announced an extensive rework of the Antarctique line, bringing updates to both the dial design and the in-house movement to fully realize its initial vision for the series. The new Czapek & Cie Antarctique Passage de Drake stands as a substantial evolution of the initial release, imbuing the base design with a more unique character while improving performance substantially. 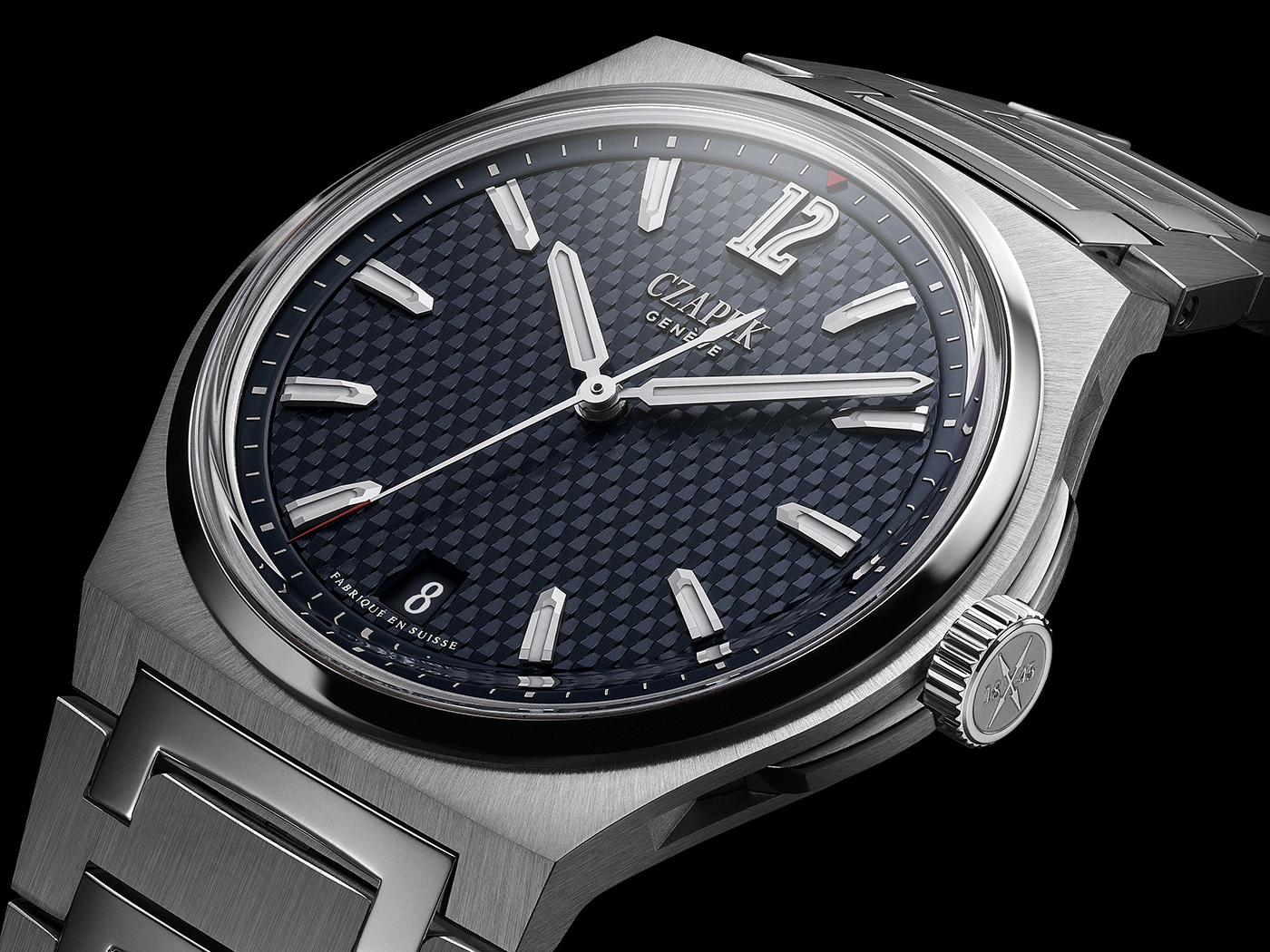 Named for the treacherous Drake Passage that separates the Pacific and Atlantic oceans between Cape Horn and Antarctica, the Czapek & Cie Antarctique Passage de Drake series shares the same 40.5mm stainless steel case as the initial Antarctique release. The design itself is an angular, minimal, almost brutalist take on integrated bracelet sports watch cues, with a brushed flat plane for the top side of the main case angling downward abruptly into the integrated lug assembly. The vertical case sides are broken up with a deep cutout that feels almost industrial in images, helping to visually compress the 10.6mm case thickness while breaking up the profile. That’s not to say the case design is without softer elements, as the small rounded crown guards and smooth polished bezel help to counterbalance the more aggressive and angular elements with a bit of visual refinement. The Antarctique Passage de Drake sports a sapphire display caseback to showcase the improved in-house movement, along with a moderately sporty 120 meters of water resistance. 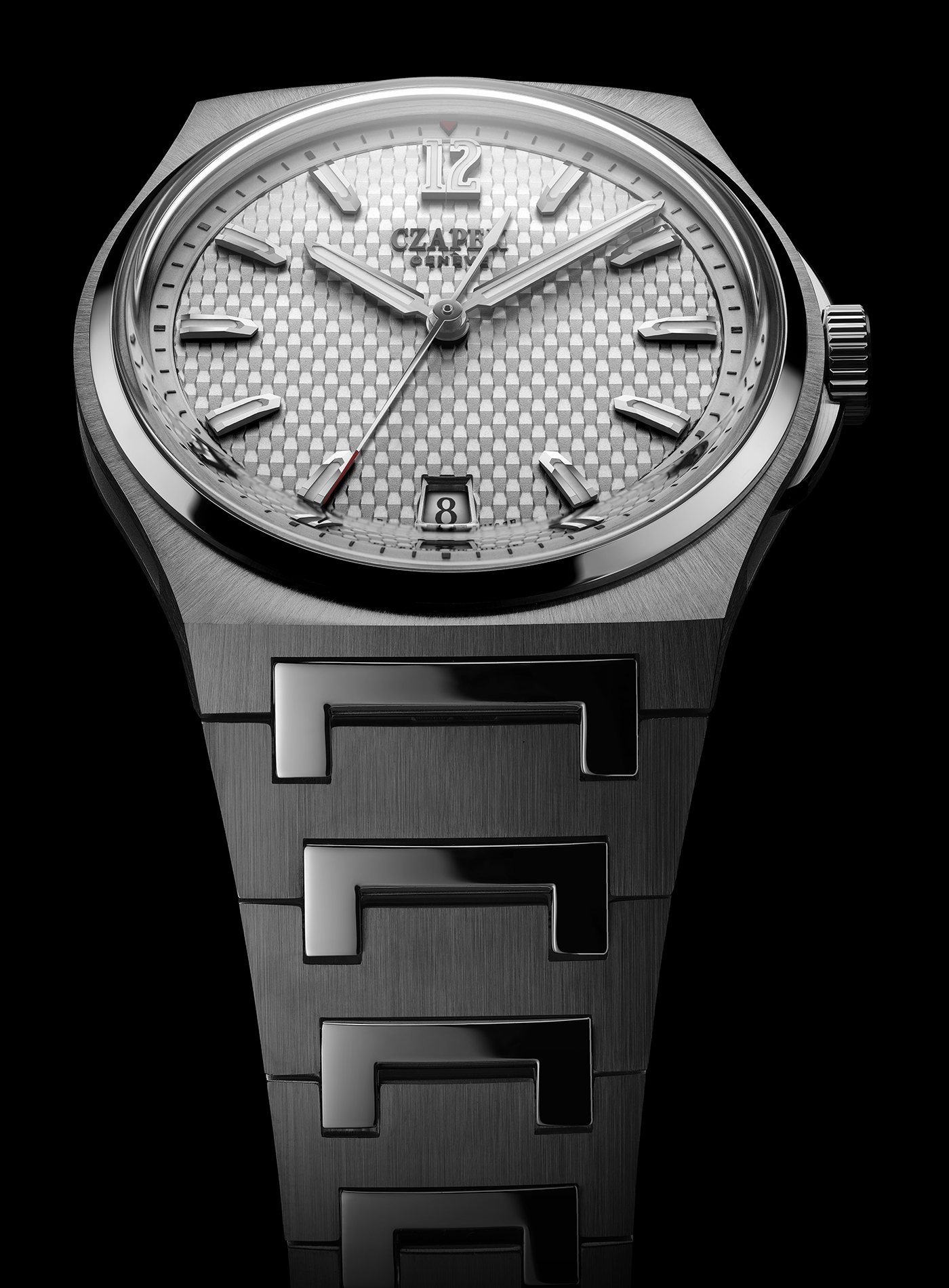 The dial design of the Czapek & Cie Antarctique Passage de Drake series is the largest departure from the initial Antarctique release, although it was never intended to be. According to the brand itself, the unique three-dimensional dial texture used here was intended to be the standard dial pattern for the whole series at launch, but internal design disputes kept it on the drawing board past the initial release date. An accidental scaling up of the trapezoidal dial elements by 50 percent quickly ended the design debate within the company, and the enlarged pattern has finally made its way to its intended home. Czapek & Cie calls this stamped pattern the “Stairway to Eternity” texture, and the lofty name emphasizes the sheer verticality of this texture. The peaks of each trapezoidal scale seem to reach up out of the dial in initial images, contrasted with equally deep troughs in between. While the angular, futuristic lumed alpha hands and pointed applied indices are carried over from the first Antarctique, the other major change comes with a new applied Arabic numeral at 12 o’clock. With a slender, slightly rounded font, this contrasts heavily with the sharply angled elements throughout the rest of the dial, and will likely become a “love it or hate it” element. It certainly adds a touch of character to the dials in initial images, disrupting the pared-back futurism with a deliberate softer twist. The other dial addition is the new applied outer minutes track, which not only sits above the level of the main dial but features polished applied markers for each minute along with an eye-catching applied red triangle above 12 o’clock. Czapek & Cie offers the Antarctique Passage de Drake in four cleanly reserved dial colors, including Ice White, classic Black Ink, a cool desaturated Deep Blue, and the limited edition Roaring Forties dial. The Roaring Forties is a medium slate gray tone, forming a solid midpoint between white and black. 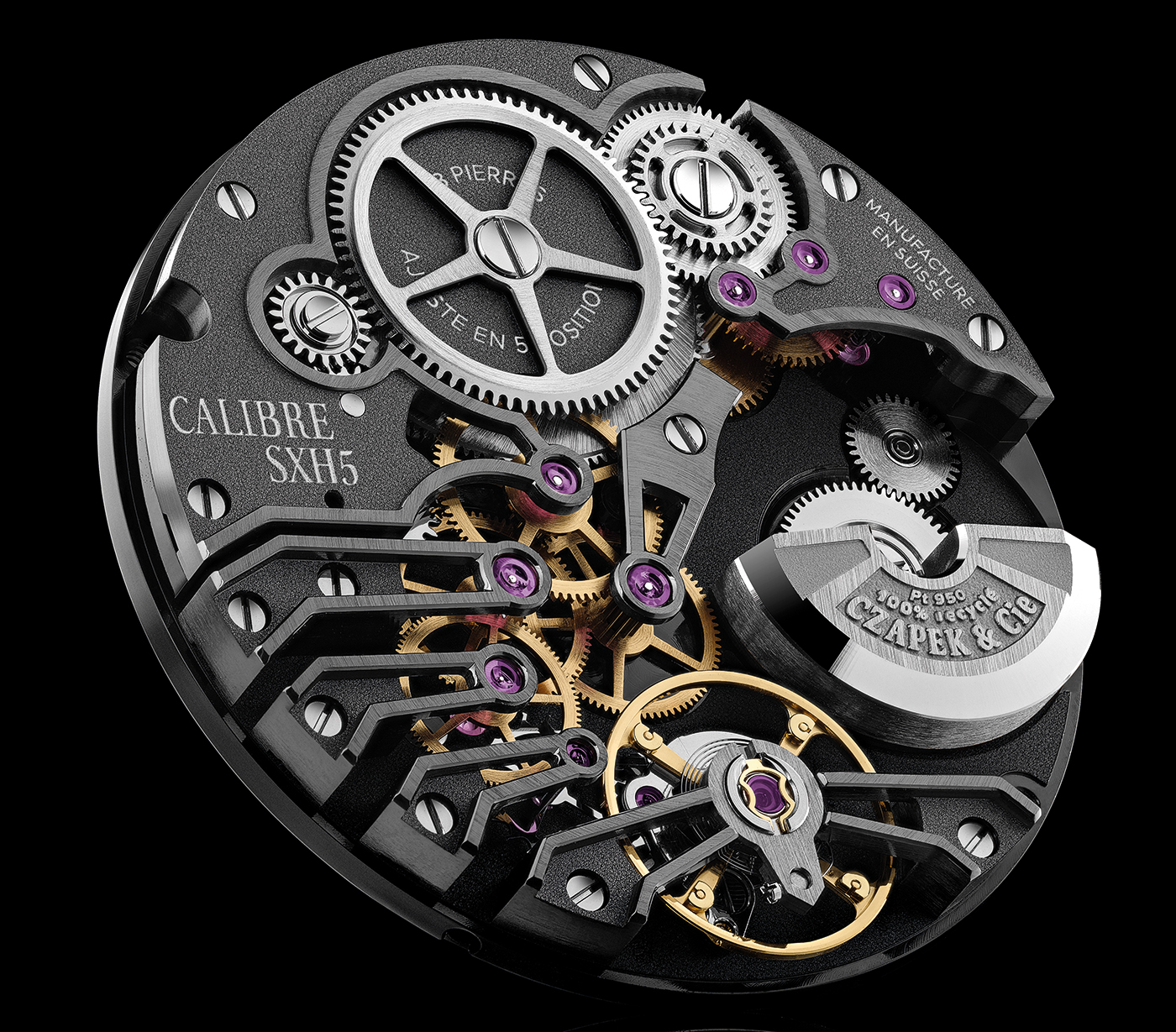 Although the in-house SHX5 automatic movement inside the Czapek & Cie Antarctique Passage de Drake made its debut alongside the original Antarctique, the brand has spent the past several months thoroughly refining the movement concept. The result is substantially reworked from the May 2020 version, including a new micro-rotor in recycled platinum for added mass and improved winding power, mounted to a completely revised set of ball bearings for greatly smoothed rotor movement. In addition, the main plate has been redesigned in German silver, while one of the movement bridges receives new hand polished beveling. Performance has been improved as well, with a larger 60-hour power reserve at a 28,800 bph beat rate. 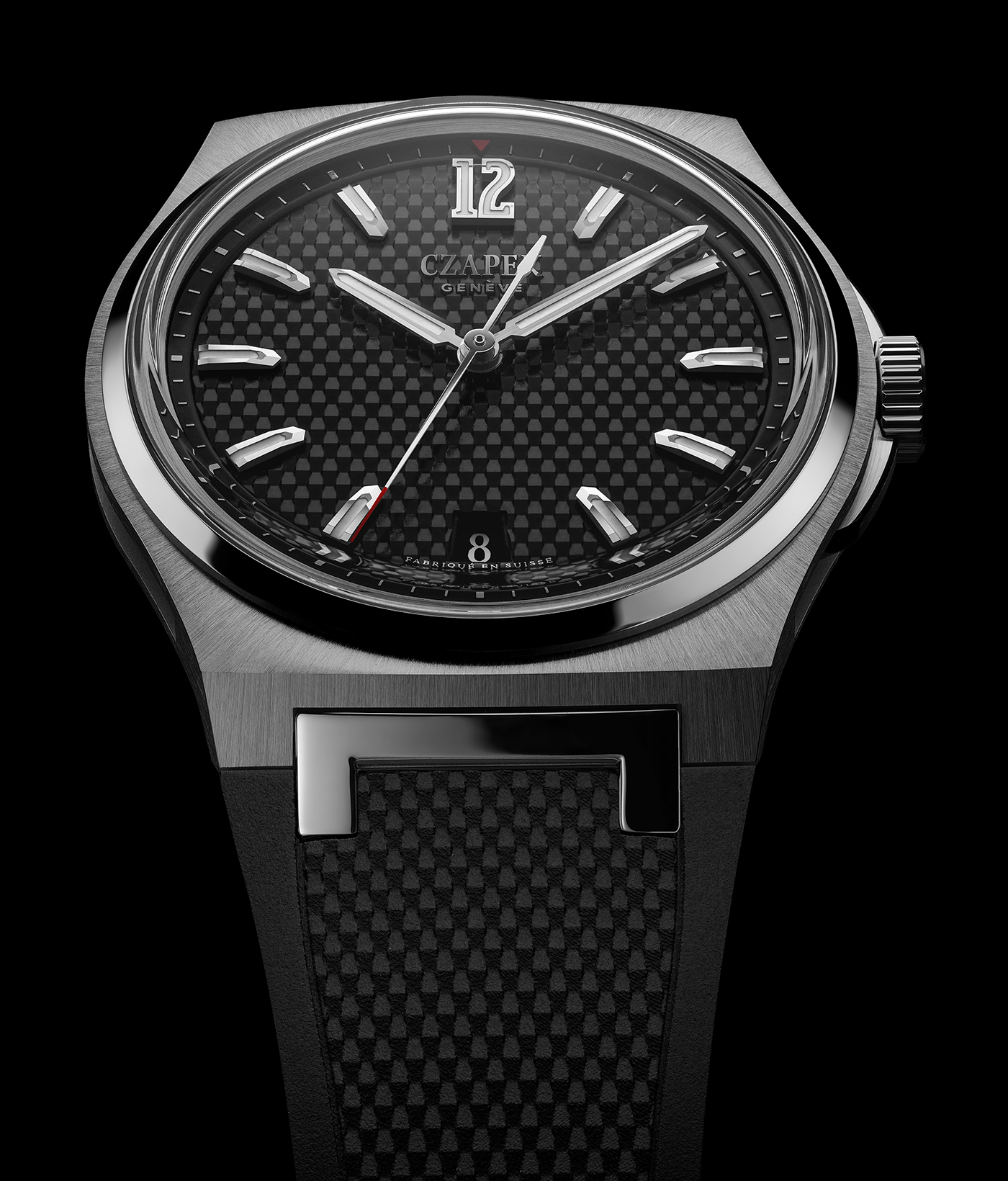 Like the original Antarctique, the Czapek & Cie Antarctique Passage de Drake can be paired with an integrated stainless steel bracelet, along with an optional strap in either rubber or leather. The integrated bracelet is the instant visual standout, with a polished “C” motif that flows nicely into the integrated lugs while adding a pop of flash. Leather and rubber options are available in black, white, blue, gray, and red, and while these straps do leave a slightly clumsy transition into the case courtesy of the integrated polished segment of the lugs, they do offer a slightly more relaxed interpretation of the design. The rubber straps in particular add a textured visual hallmark, carrying on the trapezoidal “Stairway to Eternity” pattern of the dials. 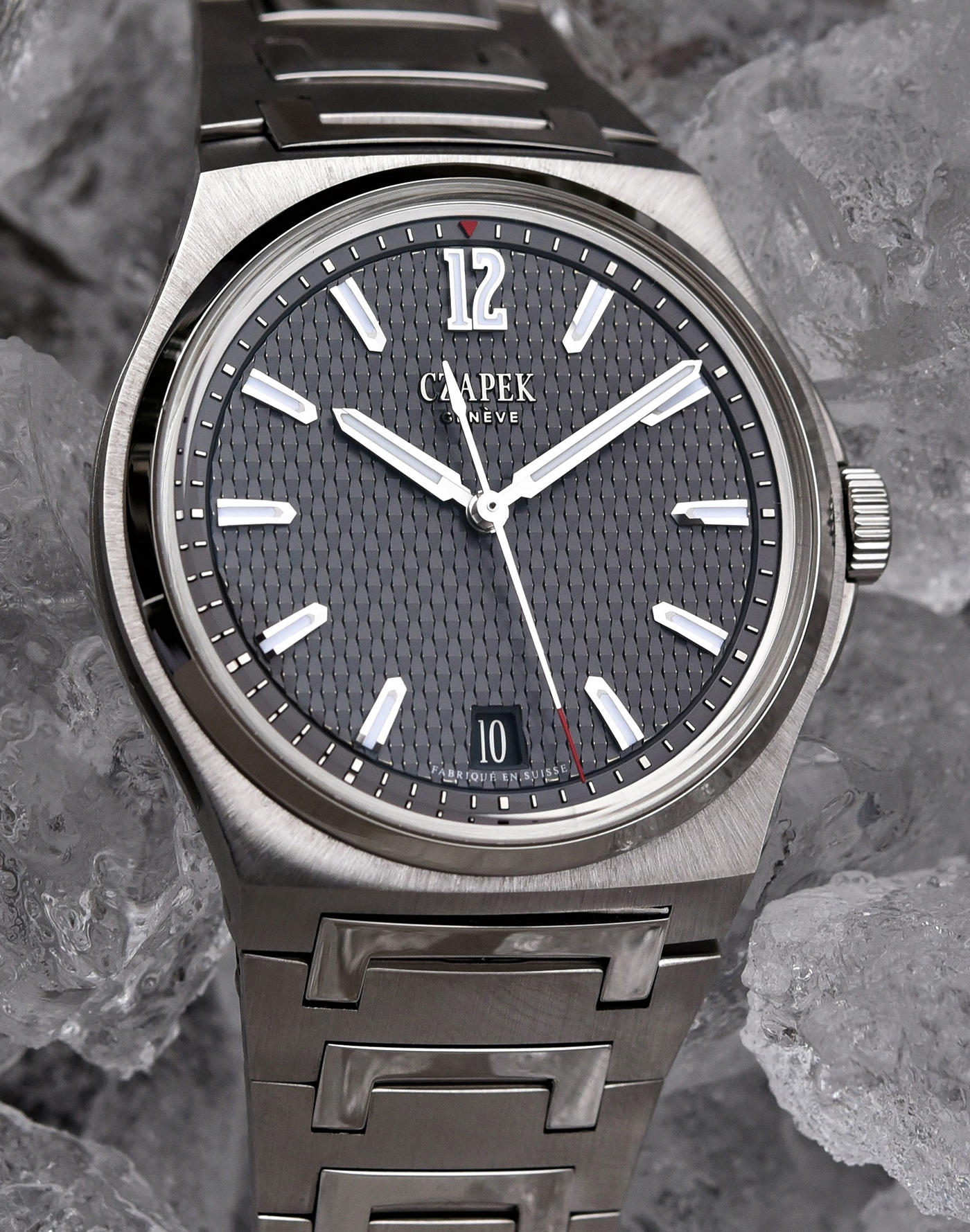