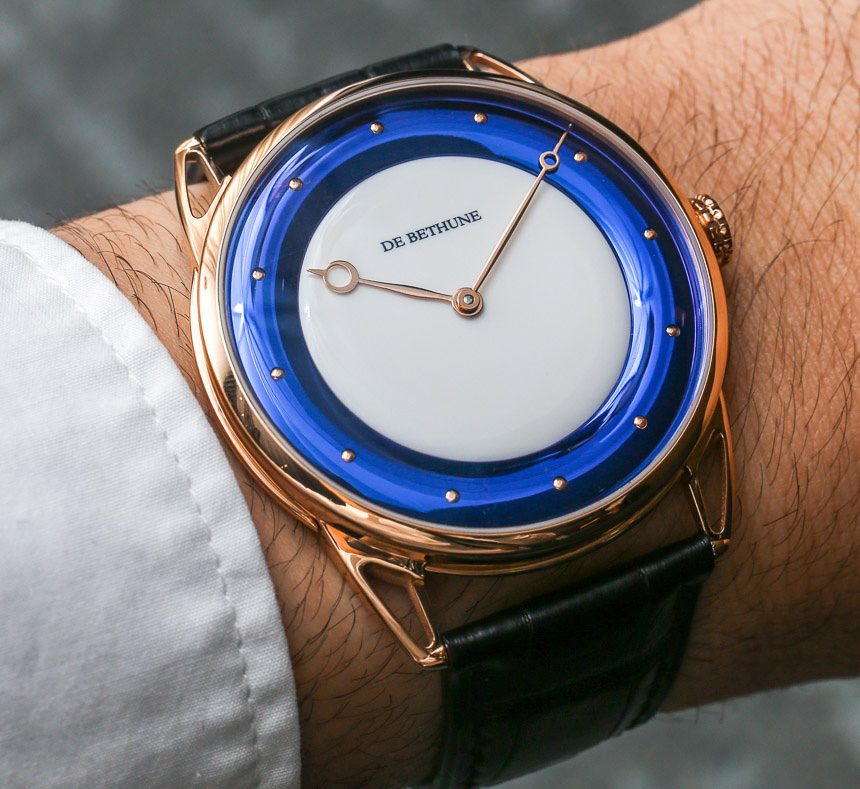 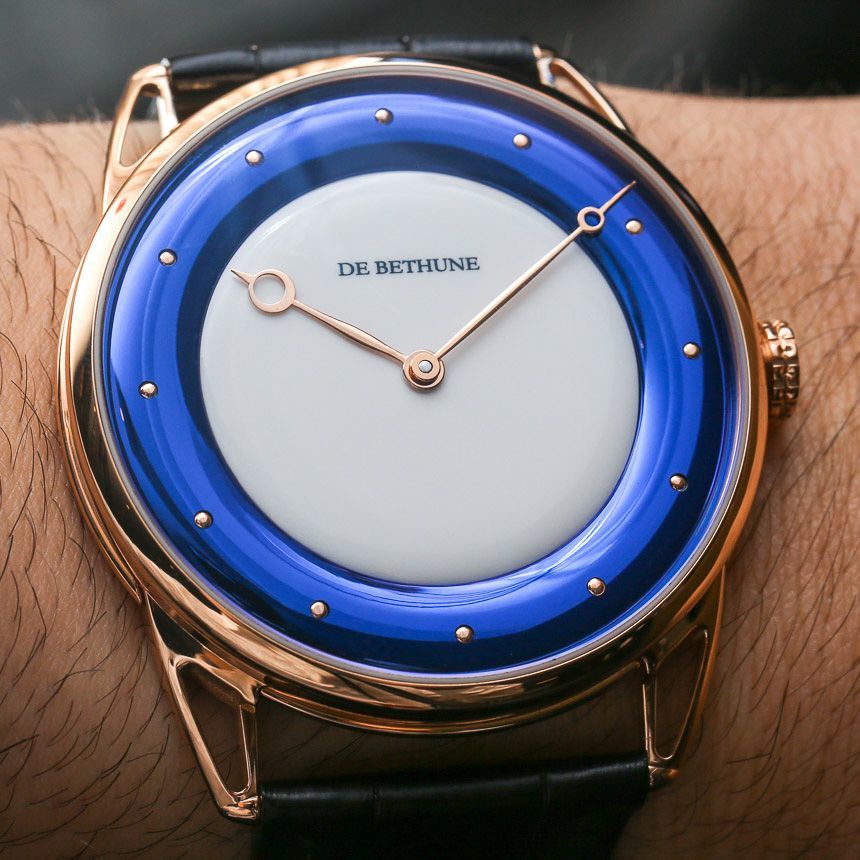 Last year in 2014, Swiss De Bethune released these very simple-looking and beautiful versions of the DB25 collection known as the DB25 Midnight Blue and DB25 White Night. The only difference between the two De Bethune DB25 models is the dial – and as a pair, they go together splendidly. De Bethune is easily one of my favorite high-end watch makers for a number of reasons. The brand carries themselves with a sort of devil-may-care attitude and a maverick spirit that allows them to release the watches they want – seemingly without much interest in what the rest of the watch industry thinks or cares.

That has helped them produce some amazingly beautiful and technically interesting things, while also developing techniques and features that no one else has. Of course, as an independently run brand, De Bethune can do that, and should be able to continue doing that as long as people exist to spend from about $50,000 and up (way up) on interesting timepieces. While you can (easily) spend hundreds of thousands of dollars on a De Bethune watch, the De Bethune DB25 Midnight Blue and White Night models are actually among their most affordable, with prices just over $40,000 USD. 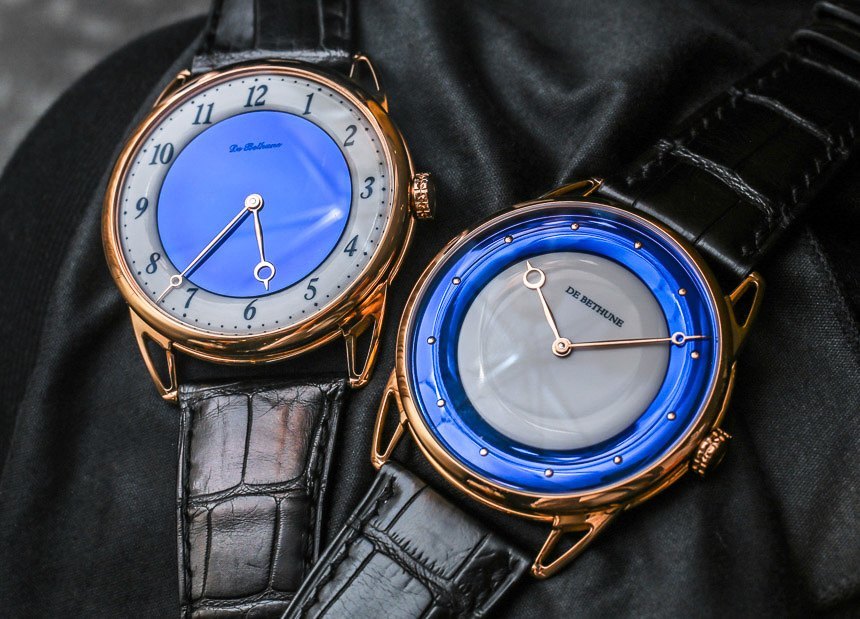 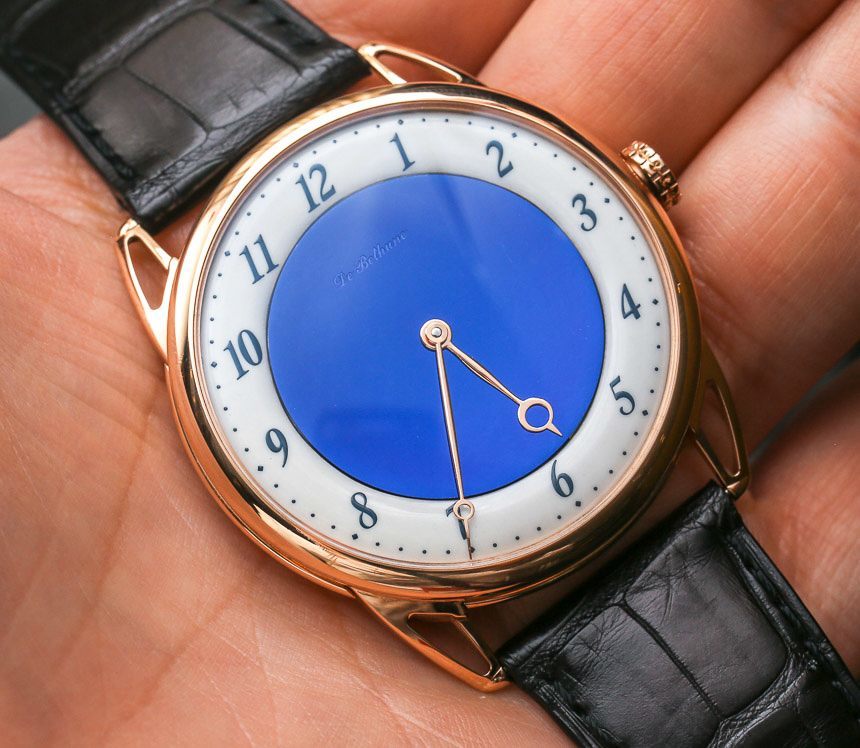 Let’s start by talking about the movement in these De Bethune DB25 watches, which is at the heart of why people buy luxury watches from independent brands. De Bethune not only produces their own movements but produces some of the most interesting mechanical movements – both technically and visually. While the De Bethune DB25 Midnight Blue and White Night watches may appear relatively simple on the dial-side, turn them over to reveal a universe of detail and design – even on what are some of De Bethune’s most basic movements.

Inside these versions of the De Bethune DB25 is the in-house made De Bethune caliber DB2024 automatic movement. Produced from 287parts, and indicating only the time with hours and minutes, the DB2024 has a long power reserve of six days, between two “self-regulating” mainspring barrels, and it operates at a modern frequency of 4Hz (28,800 bph). 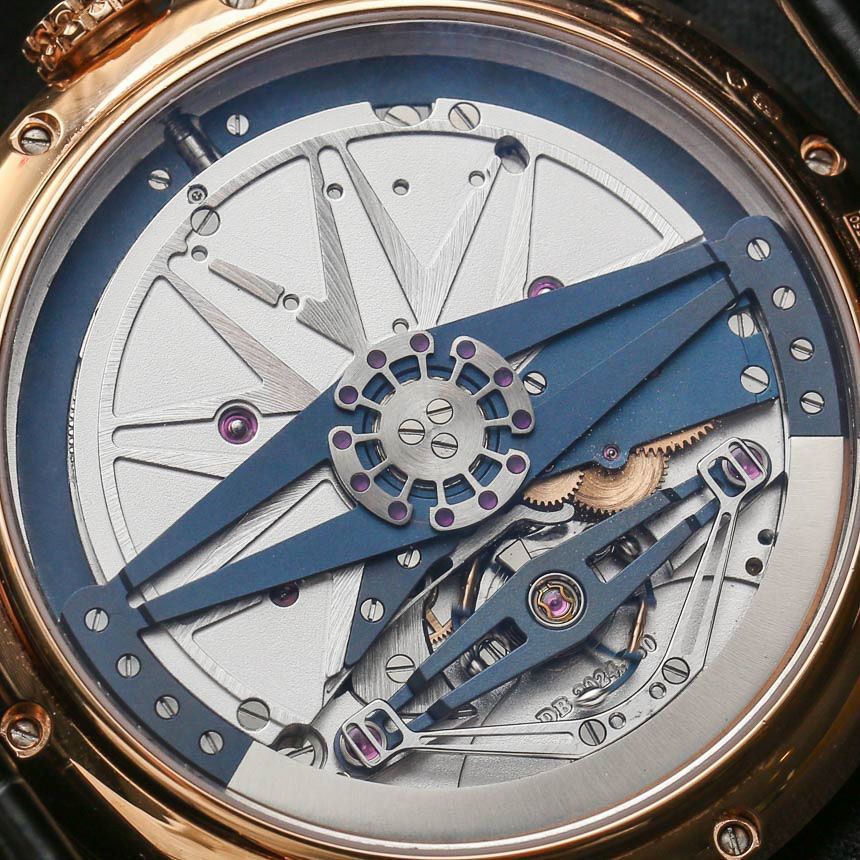 You should also notice that De Bethune doesn’t use a standard balance wheel. The one in the DB2024 movement is patented by De Bethune and, in addition to being a unique shape, is produced from titanium with solid platinum weights. The balance spring has a flat terminal curve (patented), as well as a triple pare-chute shock-absorbing system (also patented). Even the design of their unique silicon escapement wheel is patented. So while the basic principles of this movement are like most other automatic movements, the means De Bethune uses to produce their mechanical movements are highly distinct.

Why does this matter? Well, it goes back to the heart of why people like in-house made movements in the first place. A common (and logical) question many watch collectors ask is “why should I buy a watch with an in-house movement if it looks and acts so similar to those produced by companies such as ETA?” The best response by an independent watch maker is to say that their movements look different, are better decorated, and offer unique functionality. More icing on the cake is when those in-house made movements use special proprietary techniques, materials, and patents to further distinguish themselves. In various ways, De Bethune really offers all of that, which is one the reasons I personally enjoy their work so much. 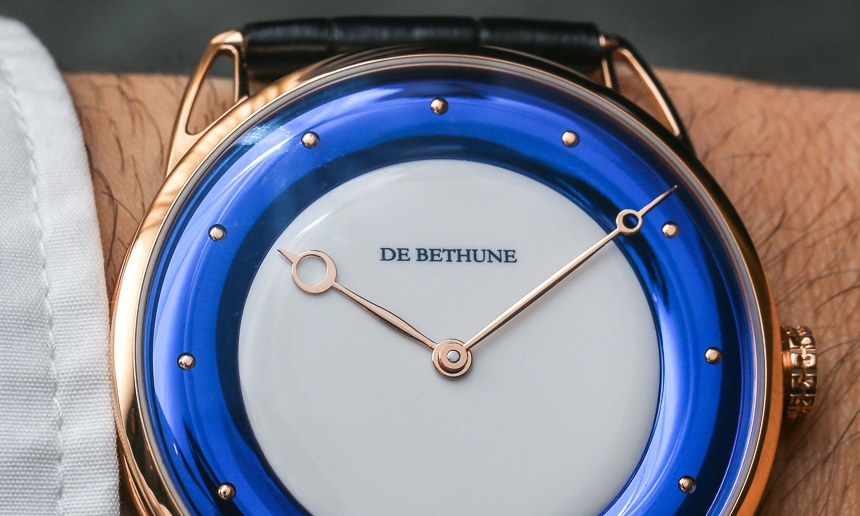 So, again, while the DB2024 is among De Bethune’s most basic movements, it still has a ton of merit and at least it is “entry-level” priced for the brand. “DB25” really refers to a watch case family versus a specific model. The De Bethune DB25 collection has everything from simple stuff like the Midnight Blue and White Night to perpetual calendars. The De Bethune DB25 case is a toned down version of the DB28. No articulating lugs, but you do get a hint of that design with the lug skeletonization. This is De Bethune’s answer to a dress watch case.

It isn’t small either, at 44mm wide, but it wears nicely, given that the lugs are relatively short. Each of these De Bethune DB25 models are in 18k rose gold – which really looks nice with the polished blued titanium dial elements. And who does blued titanium better than De Bethune? No one I’ve encountered, that’s for sure. 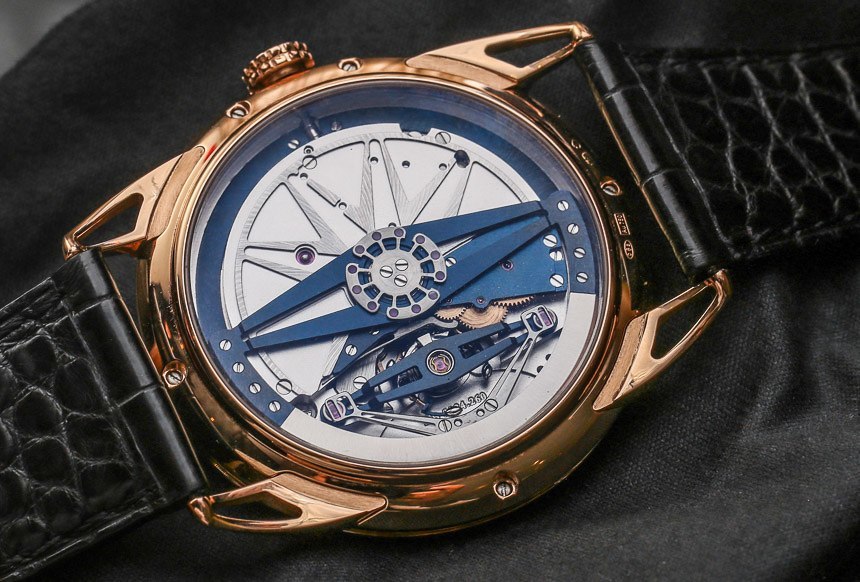 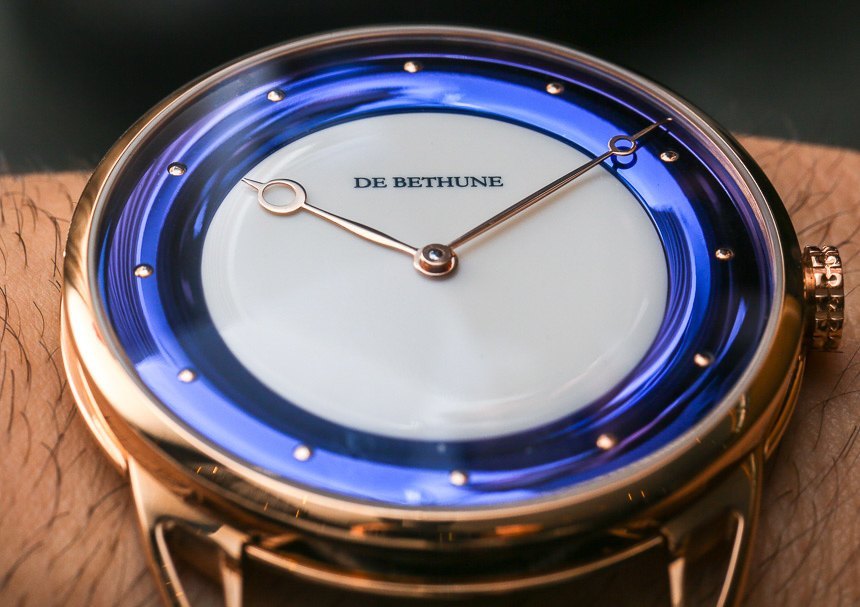 What makes the De Bethune DB25 Midnight Blue and White Night watches unique are their classic, almost traditional dials which blend the modern lines of the brand with historic elements such as Breguet-style pomme hands and Arabic numeral hour markers (on the DB25 Midnight Blue). The outer portion of the dial is distinct from the inner portion and richly curved to add visual interest. I like that the dials are simple, but certainly not flat.

Like I said, the deep, rich blue used on the dials is a specially produced and polished titanium which I believe is heat-treated just like blued-steel. The result is really lovely, and it adds a special point of distinction to these already very elegant designs. Those who didn’t believe De Bethune could do a dress watch now have their answer. 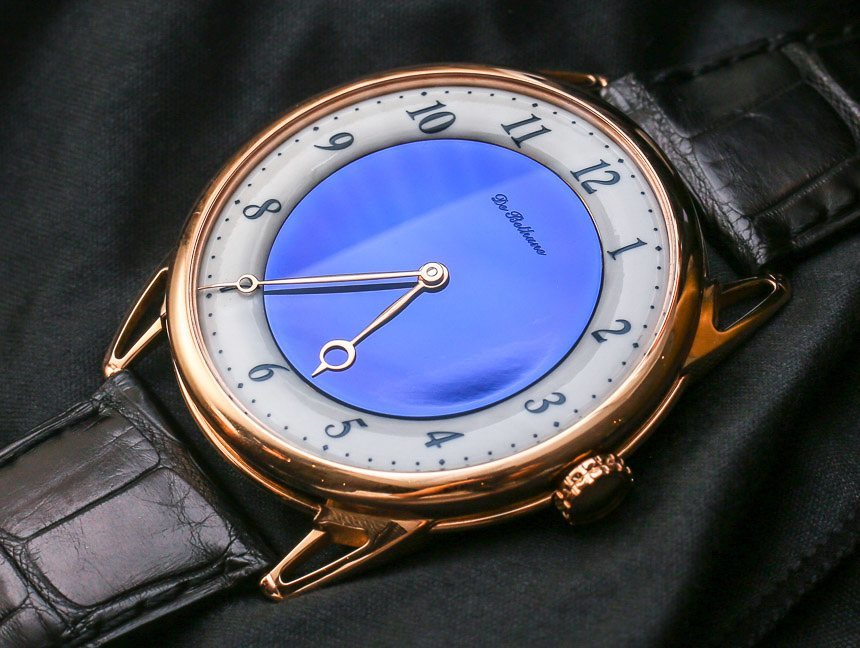 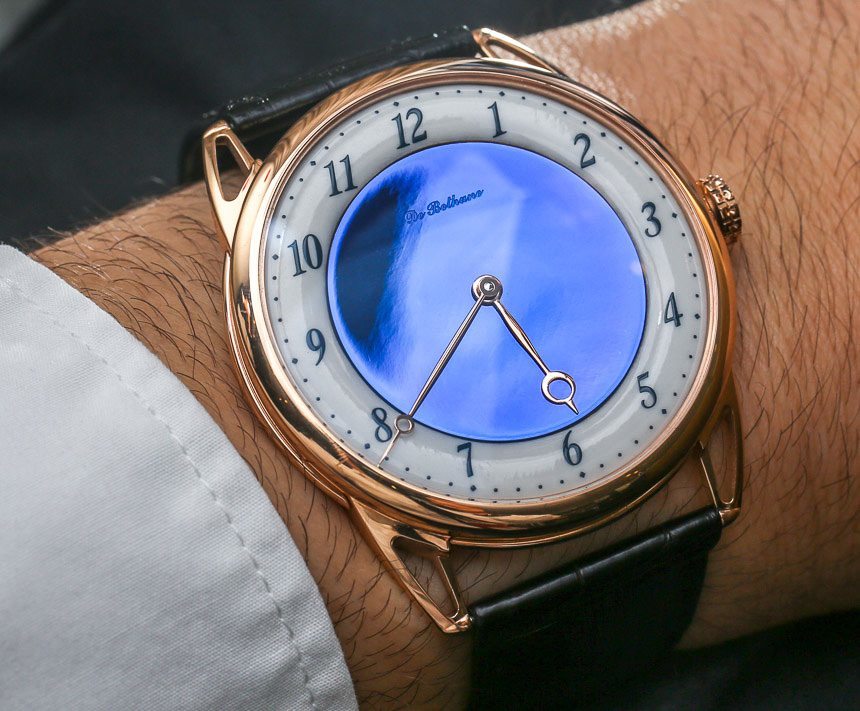 I am actually curious to see how these De Bethune DB25 Midnight Blue and White Night watches do. They are certainly attractive, but are they too different from what most De Bethune customers want? Do they, perhaps, tread too much into dress watch territory where other brands have a stronger foothold? While these are easily amazing timepieces, perhaps some people might find them too simple for their asking price. Is exclusivity and technique alone, enough? Collectors are finicky but often logical, and I hope enough see the value in beautiful watches with some avant-garde spirit such as these two models.