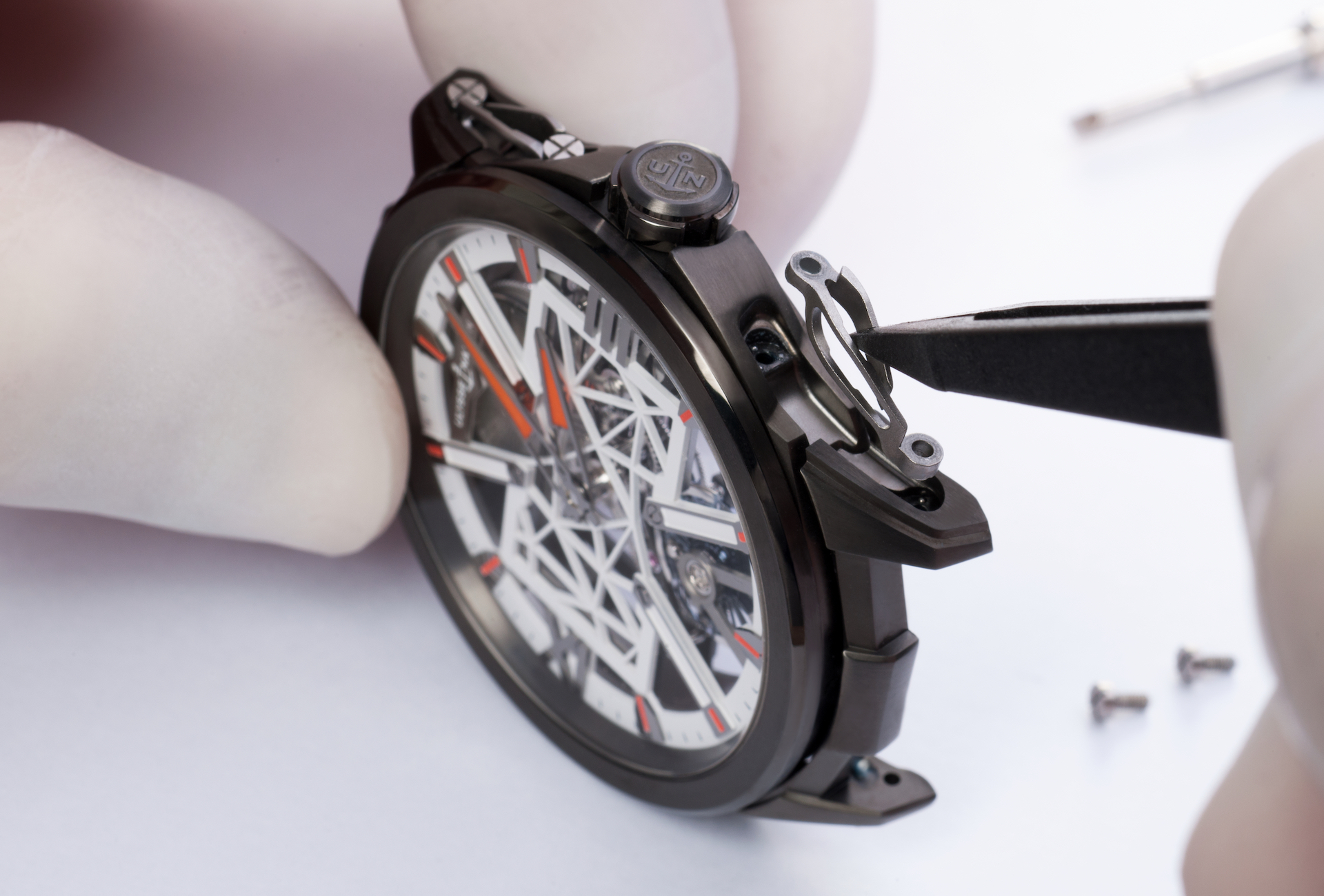 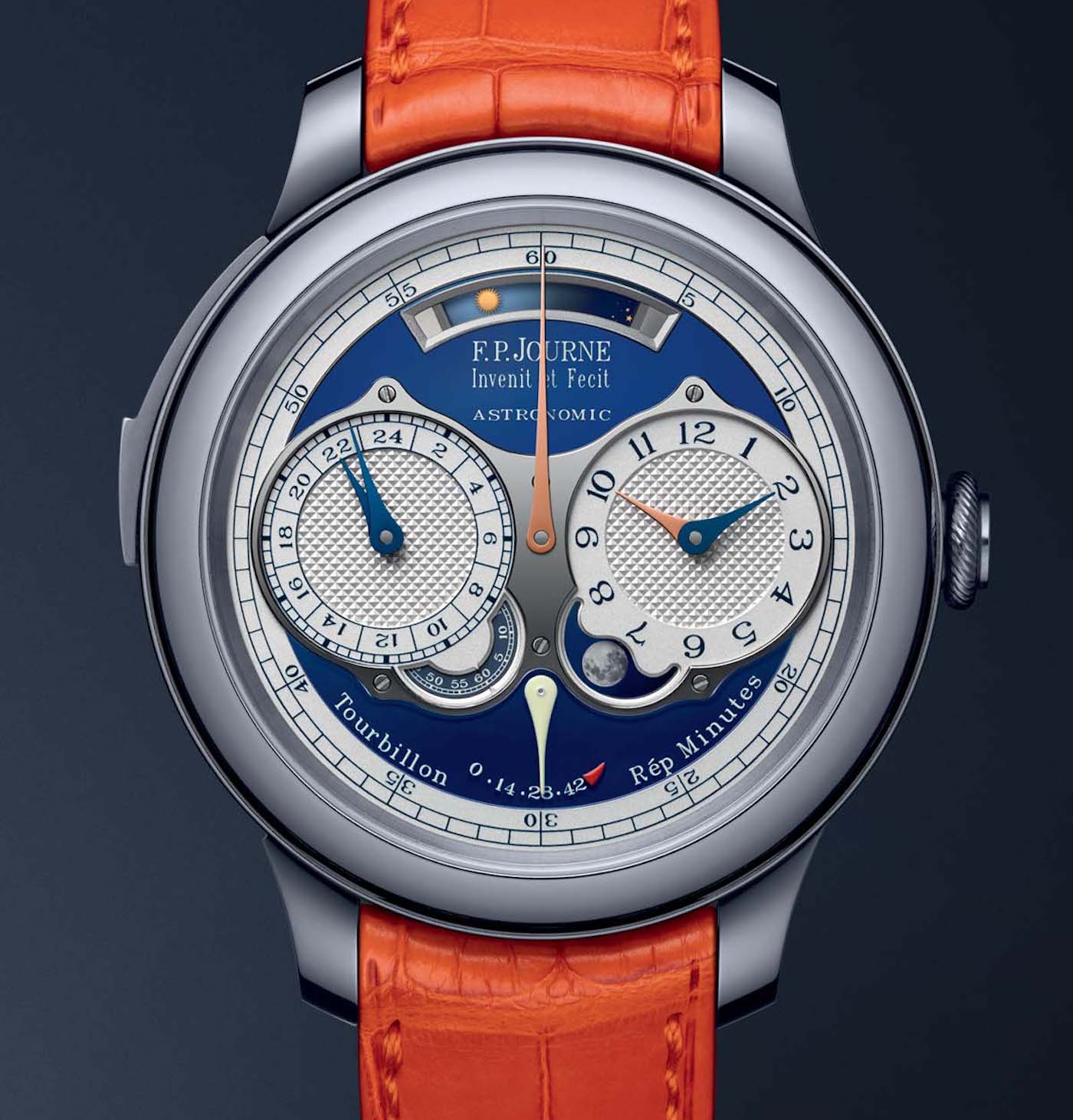 This year sees the eighth edition of the Only Watch auction, which has been held biennially since 2005. Officiated by Christie’s and organized by the Monegasque Association against Muscular dystrophy to raise funds for research into Duchene Muscular dystrophy, the events have thus far raised more than 40 million Swiss Francs by selling the unique piece creations specially produced for Only Watch.

Some of the finest watchmakers around don their thinking caps and produce such a unique piece to go under the hammer — some take part with an established watch sporting a minor modification, while some others participate with totally “one-off” watches. This year’s auction sees as many as 50 pieces submitted from a total of 52 watchmakers — with De Bethune and Urwerk,  and MB&F and L’Epee collaborating on their submissions). This year’s signature color for the event (which is used in marketing materials and conceived to give every biennial collection its own distinct flavor) is light blue. Just like in previous years, watchmakers have used this color to great effect, enlivening their classic pieces for one lucky owner. Others, however, have gone for the no-holds-barred approach and submitted a wild and wonderful creation.

Rather than take you through all 50 pieces in great depth, I’ve chosen my Top Ten and will provide a brief rundown of them here. Over the coming days and weeks, we’ll provide closer looks at the models that really captured our imagination and have relevance to the industry en masse. But if you can’t wait to see all 50 pieces, check out the gallery at the bottom of the page, which includes them all (minus the Bell & Ross piece, which isn’t available yet). 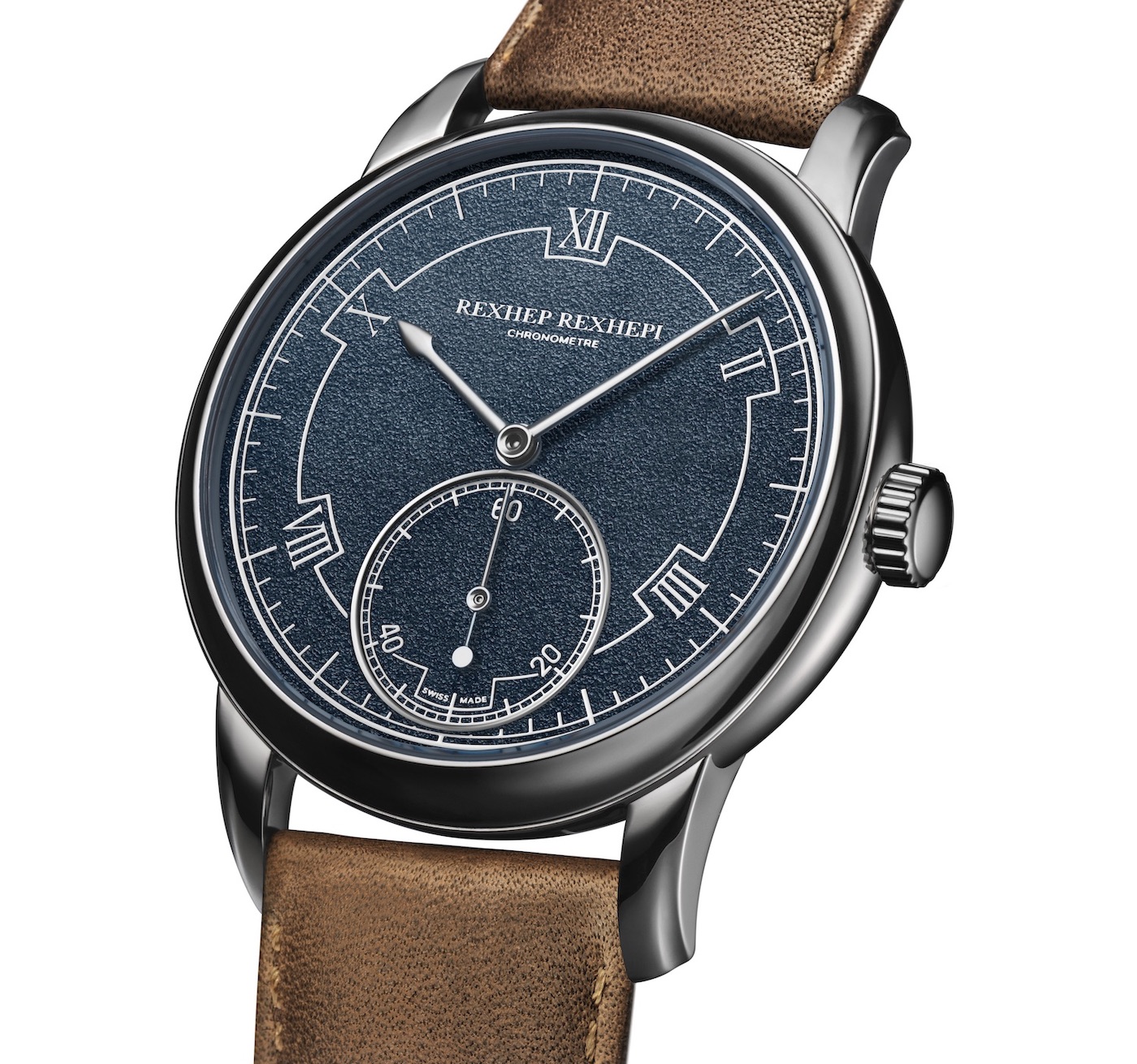 This platinum beauty comes straight from the mind of Rexhep Rexhepi, who has seen fit to emblazon the dial with his name (and why not?). Despite that unusual branding choice, this piece comes as part of the Akrivia brand canon, and one of the finest, most wearable examples yet in my opinion. At 38mm wide and 9.5mm thick, this is one sublimely wearable watch. The in-house and expertly finished RR01 caliber boasts an impressive 100-hour power reserve from one barrel. But Rexhepi didn’t achieve this piece entirely by himself: The case was made by Mr. Jean Pierre Hagmann, the famed Genevan artisan, heralding the dawn of a new partnership that could yield some very exciting results. The estimated hammer price for this model is $40,000-60,000. 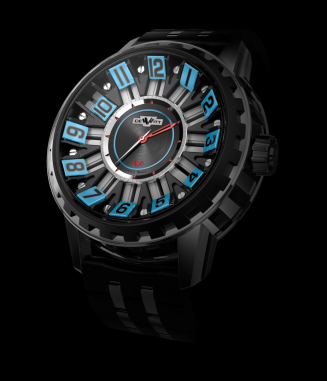 Trust me, this one came as a surprise to me too. While I very much like and respect the “time-toboggan” hour indicator, the original Academia Slide never gave me butterflies. This model, however, utilizes the Only Watch colorway rather brilliantly and marries it with a hot red, which makes this, to my eyes, the ideal watch for a Texas oilman still lamenting the exodus of the Houston Oilers. We only have a tiny image of it now, but that doesn’t stop me from showering it with praise. With a sale estimate of $60,000-$80,000, I doubt this piece will struggle to find a home. What can I say other than “Luv Ya Blue!” 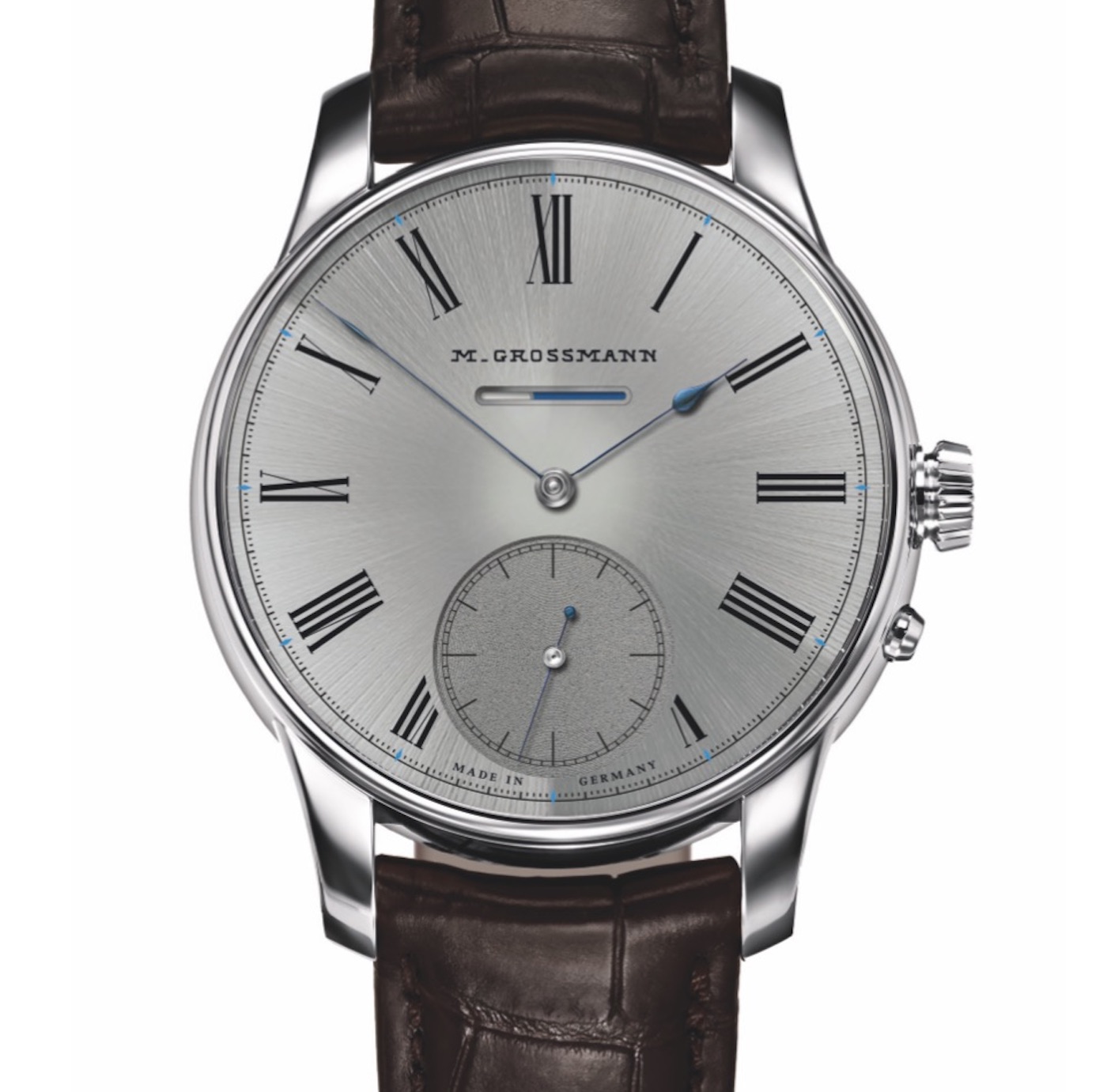 My respect for what Moritz Grossman has been doing lately is flourishing into all-out love. This throwback piece builds on the core Réserve da Marche collection, which is identified by its horizontal “loading bar” power reserve. Powered by the 100.2 caliber, this watch is typical of the Glashütte tradition, boasting regionally distinct finishing. The Roman Numerals are not common for the core collection, nor is the champagne sunray dial. The use of the Only Watch 2019 light blue is a masterclass in restraint. With a projected gavel price of $30,000-$50,000, this one seems a real bargain in comparison to the core range. Top marks for Moritz Grossman here. 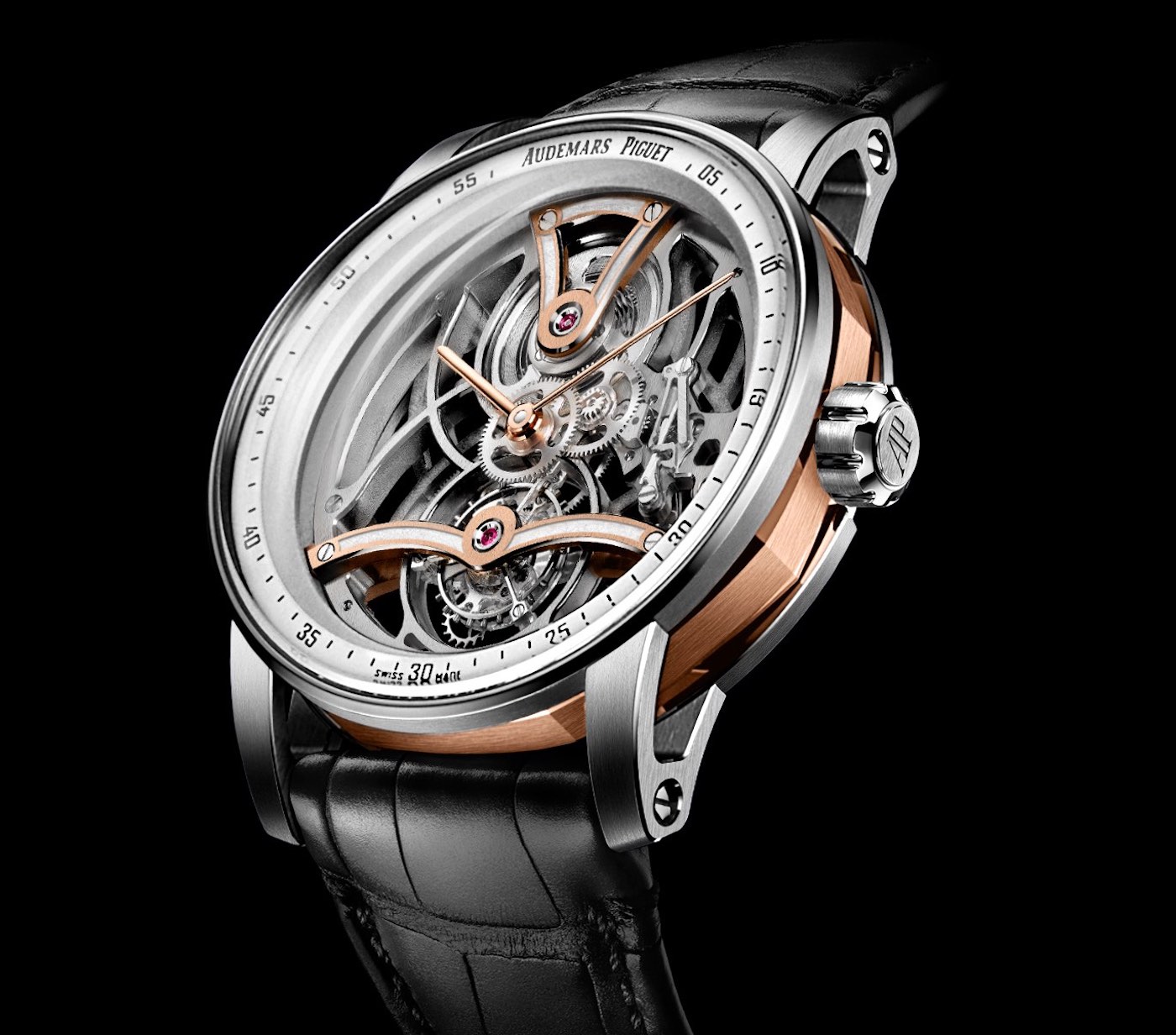 When the Audemars Piguet Code 11.59 launched earlier this year, it grabbed almost every column inch going. And no wonder! A new family from AP is not something we witness every day. And what did the community make of it? Well, there was a lot of division. While the case design (a sweet call back to the octagonal bezel of the Royal Oak seen in the case middle) was widely praised, the dials, according to many, left a lot to be desired.

So here we are at number seven on our list, and the Code 11.59 has finally smashed it out of the park for me here. The busy, yet congruous dial and the delicious two-tone case — which ties in nicely with the barrel and tourbillon bridges — have set this piece apart from the majority of the crowd. It’s one of the priciest on the list with a predicted sale price of $190,000-$240,000. 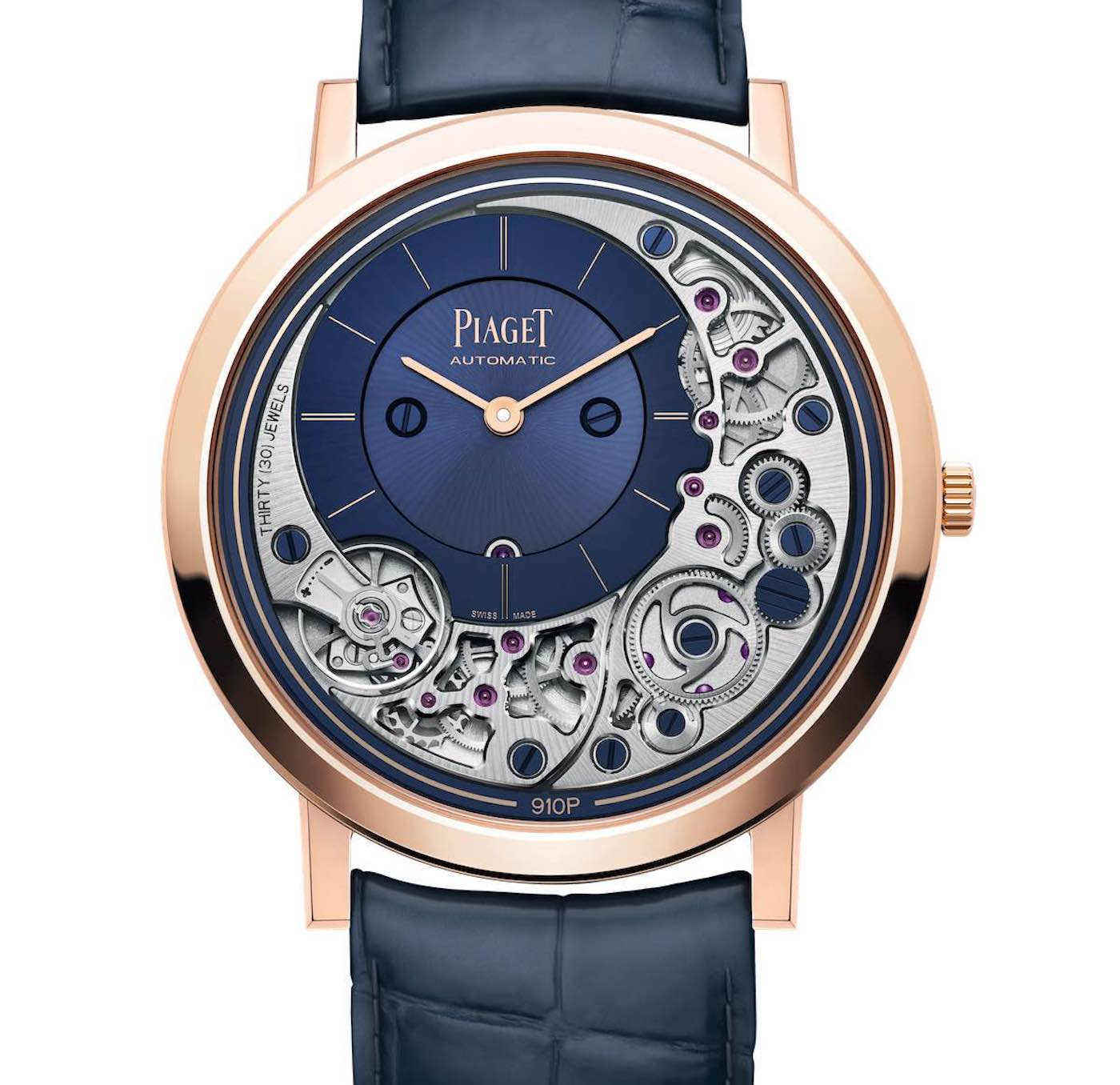 This one came as a bit of a surprise. Ariel and I discussed the Piaget Altiplano Ultimate Automatic at more length than we expected to in an upcoming podcast, simply because the more we looked at it (and dug into the cool automatic movement), the more we realized it was a significant piece not just for Only Watch, but for Piaget also.

What we’re looking at here is an opulently styled, tastefully slim self-winding wristwatch in 18ct rose gold, sporting a technically advanced and rare peripheral rotor. The colorway is classic and tasteful. The movement display sufficiently technical. The functionality and comfort? At 4.3mm thin, this really is one of the subtle stars of the show. With an estimate of $30,000-$50,000, it really has a chance to make waves. 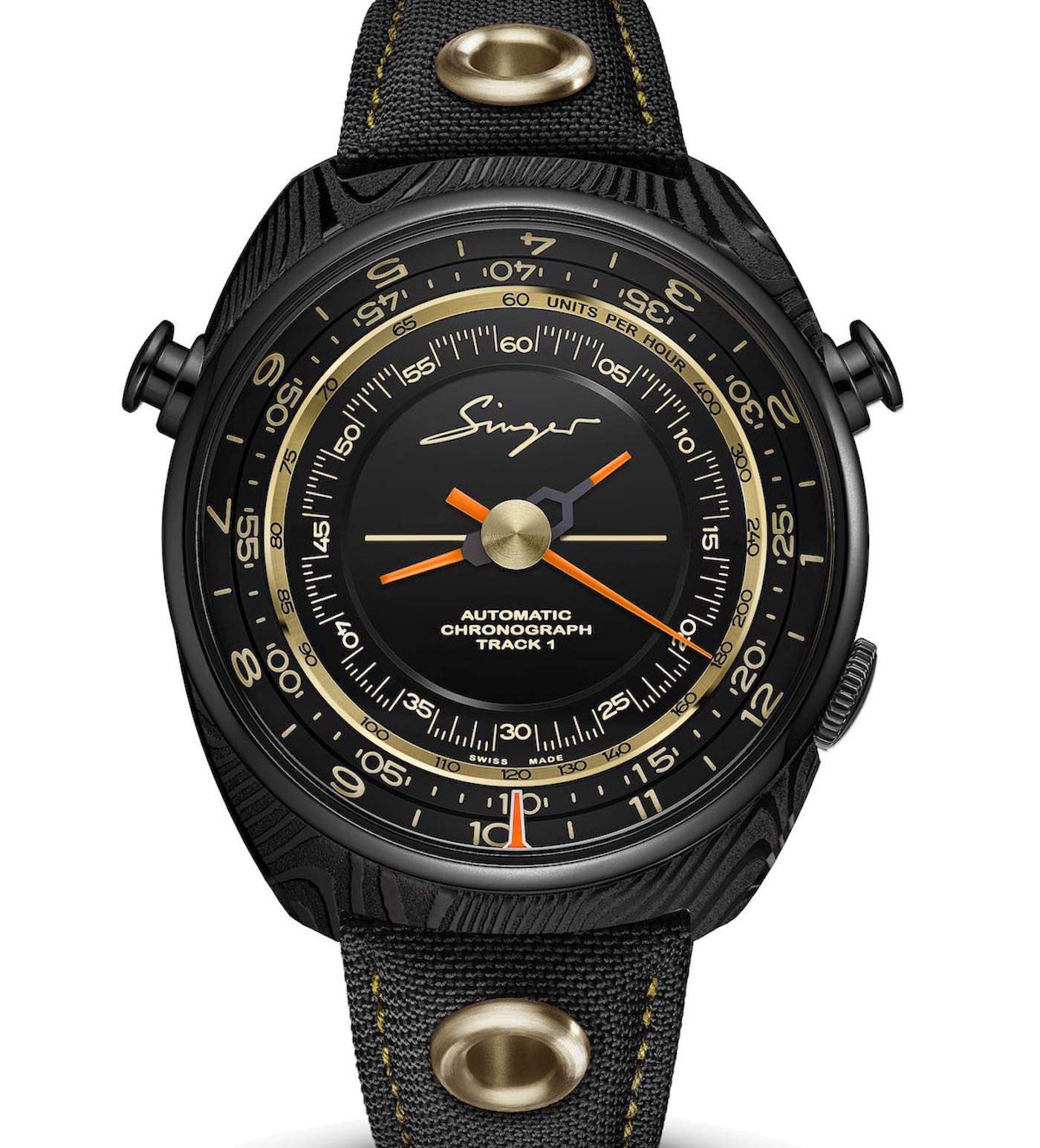 This one snuck up on the list like a thief in the night. With its DLC-coated Damascus steel case, the Singer Reimagined Singer Track 1 is an absolute barnstormer. First, it is a highly complicated chronograph that was developed by industry-veteran Jean-Marc Wiederrecht. Second, it was specially designed for world-renowned Porsche restorer, Singer, whose cars are priced well into the six-figures. Third, it is presented in a fetching “John Player Special” colorway — something that will likely make a difference to that one bidder in the room with a soft spot for the era of car racing defined by this elegant, yet menacing color combination. Lastly, but by no means least, this piece is the result of a collaboration with Swedish brand Gustafsson & Sjogren, meaning this wunderkind has many doting parents. And so although it carries a pretty steep estimate ($45,000-55,000), there’s little doubt in my mind it’ll climb that mountain and then some. 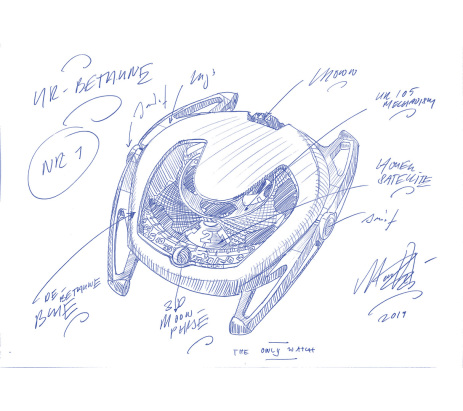 Admittedly, this combination would probably end up in everyone’s top 5 before even seeing the piddly little sketch that De Bethune and Urwerk deemed acceptable to provide…  But should we really be surprised? Two of the industry’s most enjoyable brands for their oftentimes bonkers approach to horology and the complete abandonment of its norms have collaborated to create something that could turn out to be quite special. Does it feel like a partnership that should work not just for this project, but for others going forward? Yes. Does it look like it takes the most recognizable elements of both brands and merges them seamlessly? Yes. Does the current sketch remind anyone else of Sweet Mayhem’s helmet from the Lego Movie? Answers on a postcard… The top estimate for the De Bethune + Urwerk Moon Satellite for Only Watch 2019 is $180,000. 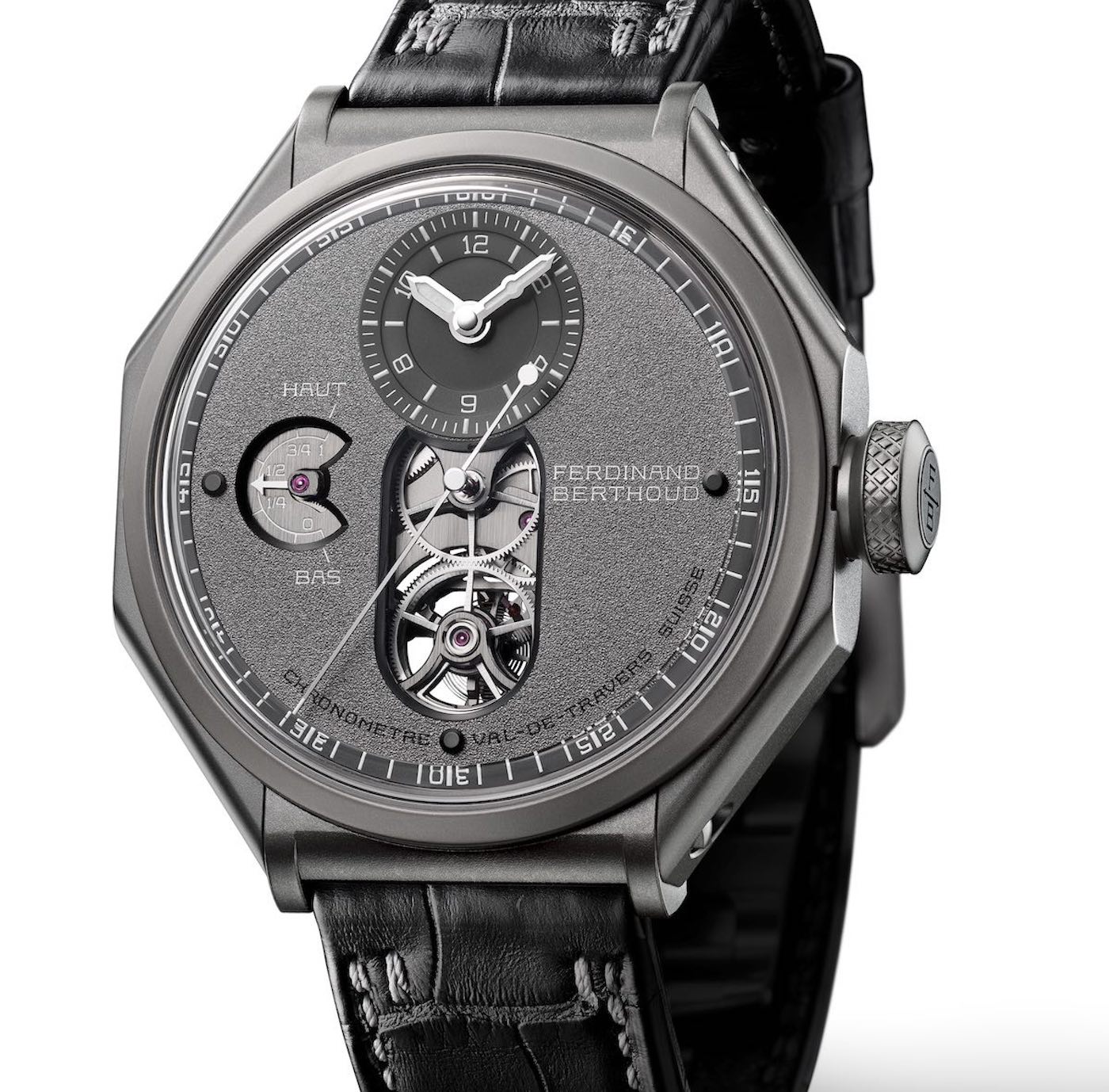 For Only Watch 2019, Chronométrie Ferdinand Berthoud has followed up its remarkable FB 1L with the Chronomètre FB 1 Night Star FB 1.4-4. It is yet another — but not yet boring — iteration of the FB 1 where the strictly traditional movement design and marine chronometer-inspired case are combined with high-tech or at least highly unusual materials. The ceramized titanium case is a thing of brooding beauty, while the industrial dial elements never let-up on the darker persona this watch is trying to project.

For this watch to reveal its true ability, you must flip it over in your hands (or simply click this link!). Once that’s done, you will see the tourbillon movement with a fusee-and-chain transmission and a host of other extraordinary details. It’s one of watchmaking’s best-kept secrets, for me, and I never get tired of admiring the finishing this relatively low-output Maison (which is owned by Chopard) achieves time and time again. A trifling bid of $170,000-$200,000 should see you in the mix for this model when the hammer falls. 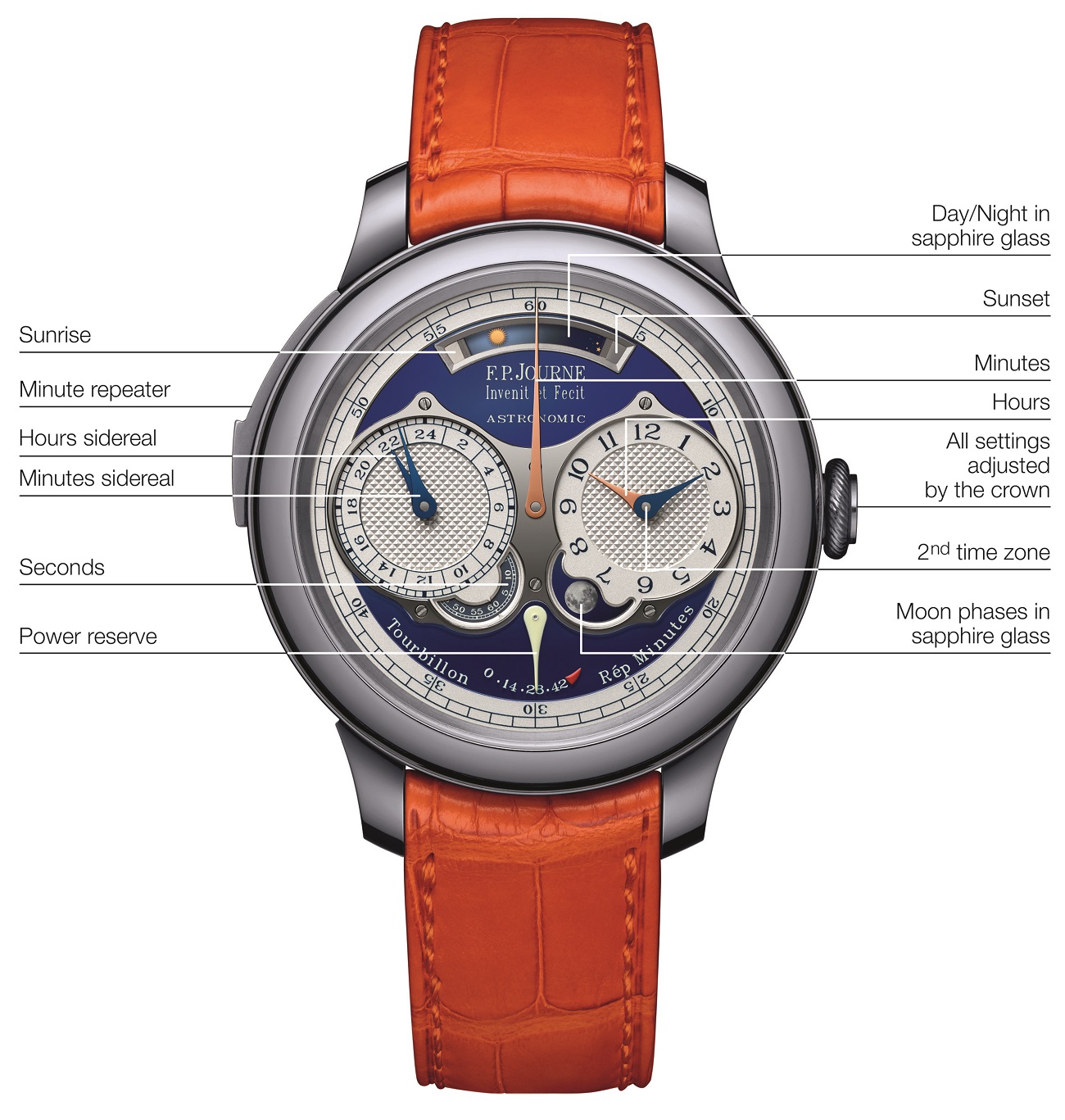 I’ll happily take a bit of flack for not putting this one top of the list (because from a horological perspective, it probably deserves to be). It was only an extreme aesthetic admiration for the piece that topped the chart kept it from the first position. But I’m just one guy. I’d love to know your thoughts in the comments below.

While this is a prototype (and sold as such), it is possible F.P. Journe is planning a new release based on this hyper-complicated timepiece. And why not? Who doesn’t want a watch that displays the hours, minutes, and seconds of average time, a second timezone, the hours and minutes of sidereal time, the time of the sunrise and sunset, the phase of the moon, the power reserve, an annual calendar, and the equation of time? 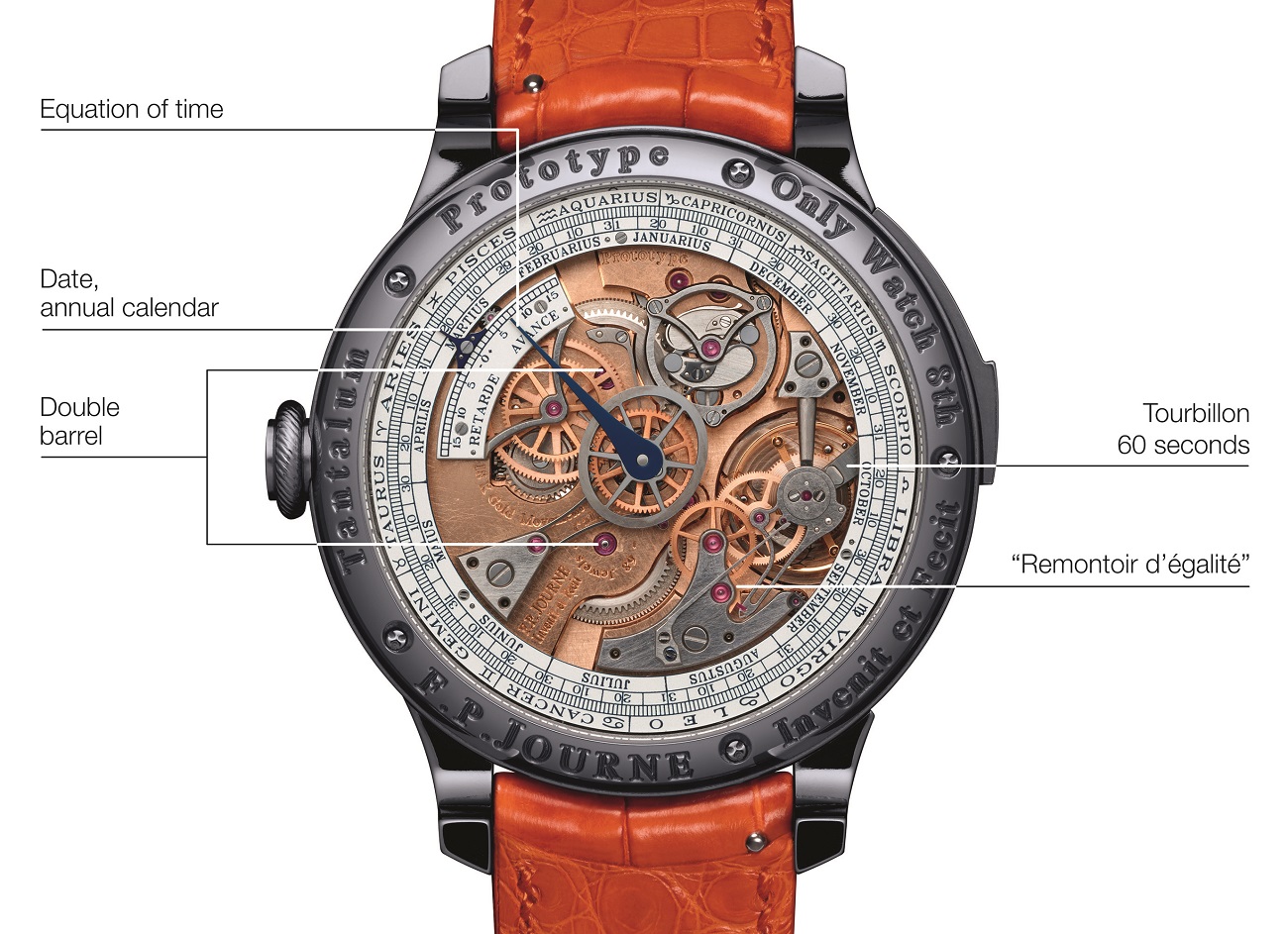 One thing I also love is how simple F.P. Journe kept the name. In an age when we’re used to seeing names as long as press releases, the F.P. Journe Astronomic Blue seems almost impolitely curt, considering its fearsome list of functions. Seriously. It almost makes the fact that the concept movement features a double barrel, minute repeater, 60-second tourbillon, and a dead-beat second surplus to requirements… 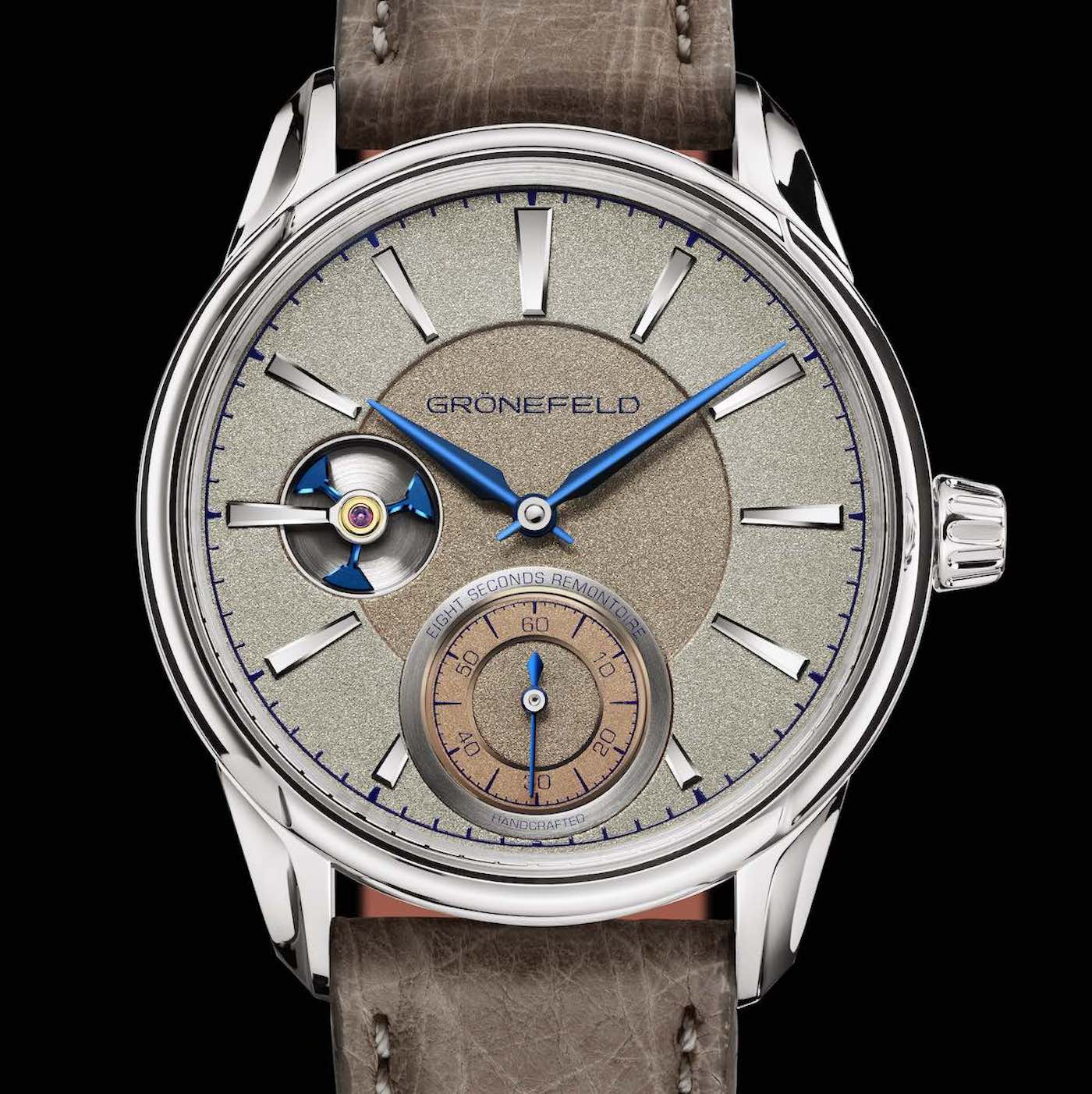 Well, they had to wade through some pretty stiff competition to get to the top step, but the horological brothers have done it. If you allow a personal note, I will share that the Grönefeld 1941 Remontoire has stolen my heart. I love the frosted dial and the visually engaging remontoire system. At the 9 o’clock position of the dial, a blue “Governor” spins every eight seconds. This feature is performing much the same function as a fusee-and-chain system: its purpose is to supply the escapement with constant force throughout the mainspring’s lifespan. It is a phenomenal addition to an already stellar collection. And with a flash of orange decorating the back of the Ostrich leather strap, the Grönefeld boys stay true to their roots once more. Experts assume this piece will fetch somewhere in the region of $48,000-$69,000, which sounds like a good result for all involved. Learn more about the Only Watch 2019 watches at onlywatch.com.